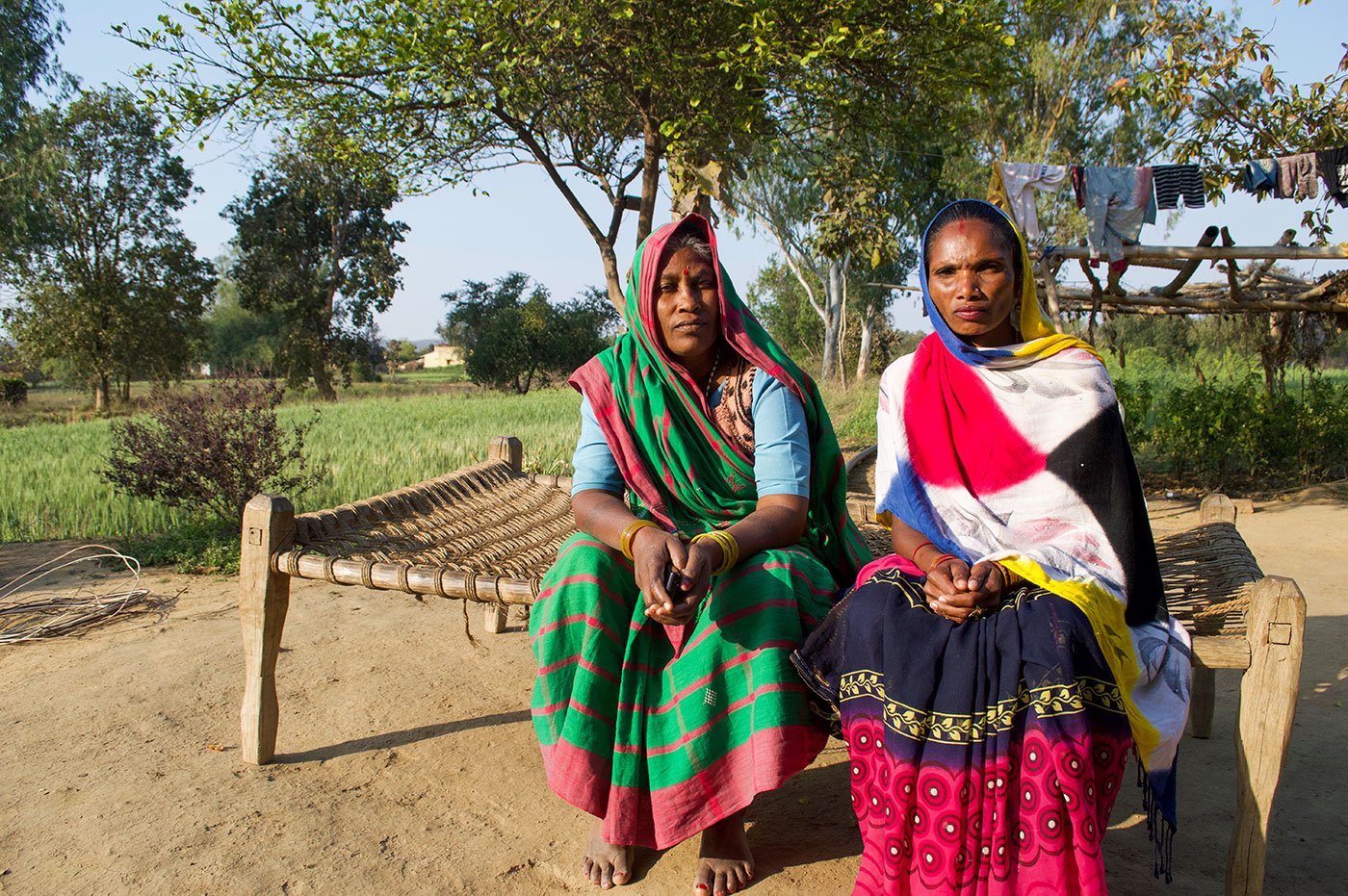 No stranger to struggle in Sonbhadra

Sukalo Gond, veteran Adivasi activist in UP’s Majhouli village, says the road ahead is long – tomorrow, July 24, the Supreme Court will decide on the eviction of over a million Adivasis across India

Seated on a cot outside her brick and mud house in Majhouli village one afternoon, Sukalo Gond says jokingly, “We went to the district magistrate’s office in Robertsganj on 5th March to celebrate the Supreme Court’s decision to evict our communities.”

She is referring to the interim order issued by the Supreme Court on February 13, 2019, to evict well over a million Adivasis from more than 16 states in India, based on a petition filed by wildlife conservation groups contesting the validity of the Forest Rights Act (FRA). The FRA of 2006 aims to give forest communities rights to their traditional lands and address the historic social injustices they have faced.

“Going to the DM’s office was important,” says Sukalo, surrounded by her grandchildren. ‘We have to stand with each other and with all the other communities who live in the forest. Even though there has been a stay order from the Supreme Court [following an appeal filed by the central government], we have to continue to show the people in charge that we are not afraid of asking for our rights.” She smiles. “About 30 of us barged into the DM’s office, but he did not get angry or ask us to leave. He told us to come back and speak to him. Maybe because he was new.”

I had first met Sukalo Gond in September 2016 in Robertsganj, Uttar Pradesh, at the office of the All India Union of Forest Working People (See ‘I knew I was going to jail that day’ ). The AIUFWP (originally the National Forum of Forest People and Forest Workers, formed in 1996) was set up in 2013. It has roughly 150,000 members in around 15 states. In Uttar Pradesh, the union works in 18 districts with about 10,000 members.

An interim order issued by the Supreme Court on February 13, 2019, could evict well over a million Adivasis from more than 16 states in India

Watch video: 'We are people of this land, we will not leave it'

Now in her 50s, Sukalo is no stranger to struggle. She joined the Union in 2006 and has since become the treasurer. One of the main goals of the Union is to see that communities use the FRA to claim their land rights.

In June 2015, Sukalo went to jail for over a month for participating in protests against the Kanhar irrigation project in the state. On June 8, 2018 she was arrested for the second time, along with Keesmat Gond who is in her 30s, and Sukdev Gond, in his 50s.

All of them are members of the Union and belong to the Gond Adivasi community. They were arrested from the Chopan railway station as they arrived from Lucknow after a meeting with Forest Department officers. Over 10 cases had been filed against them, including under Section 504 of the IPC (intent to provoke the breach of the peace). By the end of the day, Sukalo and Keesmat were sent to Mirzapur Jail and Sukhdev was sent to Sonbhadra Jail. Keesmat and Sukhdev were released in September, but Sukalo was only released in November 2018.

“This time, jail was different. I knew what to expect, but I was angry. I was full of anger; my whole body was only anger. I was being treated like a common criminal! They were all false cases. I know the police did this because they want to scare us. I am fighting for my rights through lawful means – what is wrong with that? I refused to eat the food at the jail. I survived on fruit and snacks that my friends would bring when they would visit."

Just then, Sukhdev and Keesmat arrive at Sukalo’s home to discuss their colleague Nandu Gond, who had been arrested five days earlier. At the time of the meeting, they did not know which police station he was taken to and were worried about him. They think he had been arrested for trying to urge people in the community to use the FRA. Sukalo offered some suggestions on who to call, how to set up a ‘phone tree’ to contact a large number of people, and why they must continue to persist on the issue. (Nandu Gond has since been released from jail.) 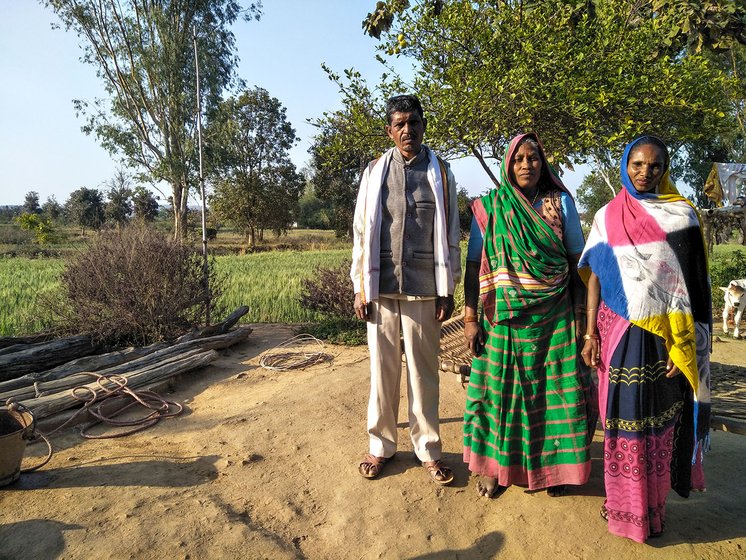 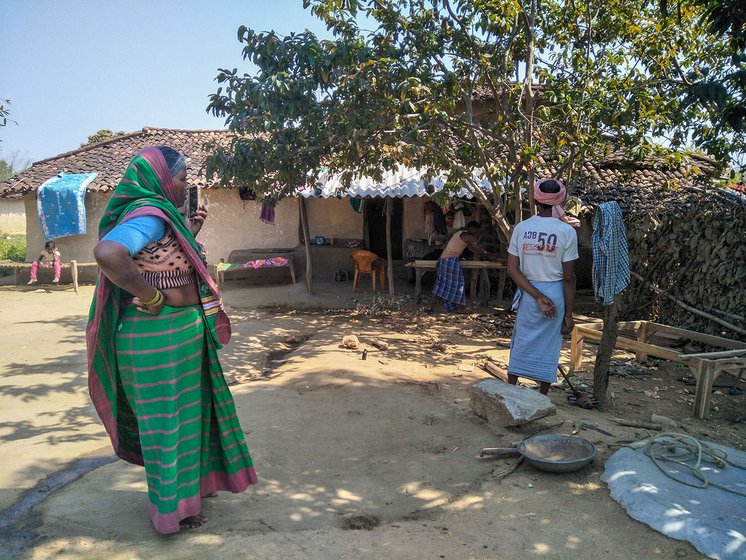 Left: Members of the All India Union of Forest Working People: Sukhdev, Sukalo, and Keesmat. Right: and (right) Sukalo making phone calls to other community members

Sukhdev speaks of how scary it was to be in jail. “We had only joined the Union a few months before we were arrested. I was afraid of being beaten because those are the stories we were told by other villagers. We weren’t fed well.”

Keesmat says that it was easier for her because Sukalo was there too, but she missed her children. “I didn’t know what to expect, but Sukalodidi kept calm and so did we. Still, I kept wondering – will we ever get out of jail? How long will they keep us here?”

They make plans to be in touch about Nandu and leave. I notice that Sukalo spends a lot of her time on the phone, trying to organise members of the Union, answering questions, offering support. People from the community also call her about their Aadhaar cards or to get access to rations.

Sukalo says it can get tiring, trying to manage her home and family as well the work of the struggle. “But the work of the Union must get done,” she says, “Though now I am traveling more and I am worried about my children.”

On February 28, 2019, the Supreme Court had stayed the petition order, asking the state governments to report on the claims made by Adivasi households under the Forest Rights Act. This offered a brief respite.

On Wednesday, July 24, the SC is scheduled to once again sit for a hearing on the eviction issue.

Sukalo knows the road ahead remains long.  “It’s not as if we planted the trees to eat the fruit. The people who are going to eat the fruits of our labour are still to come. They are my grandchildren and I do this work for them.”