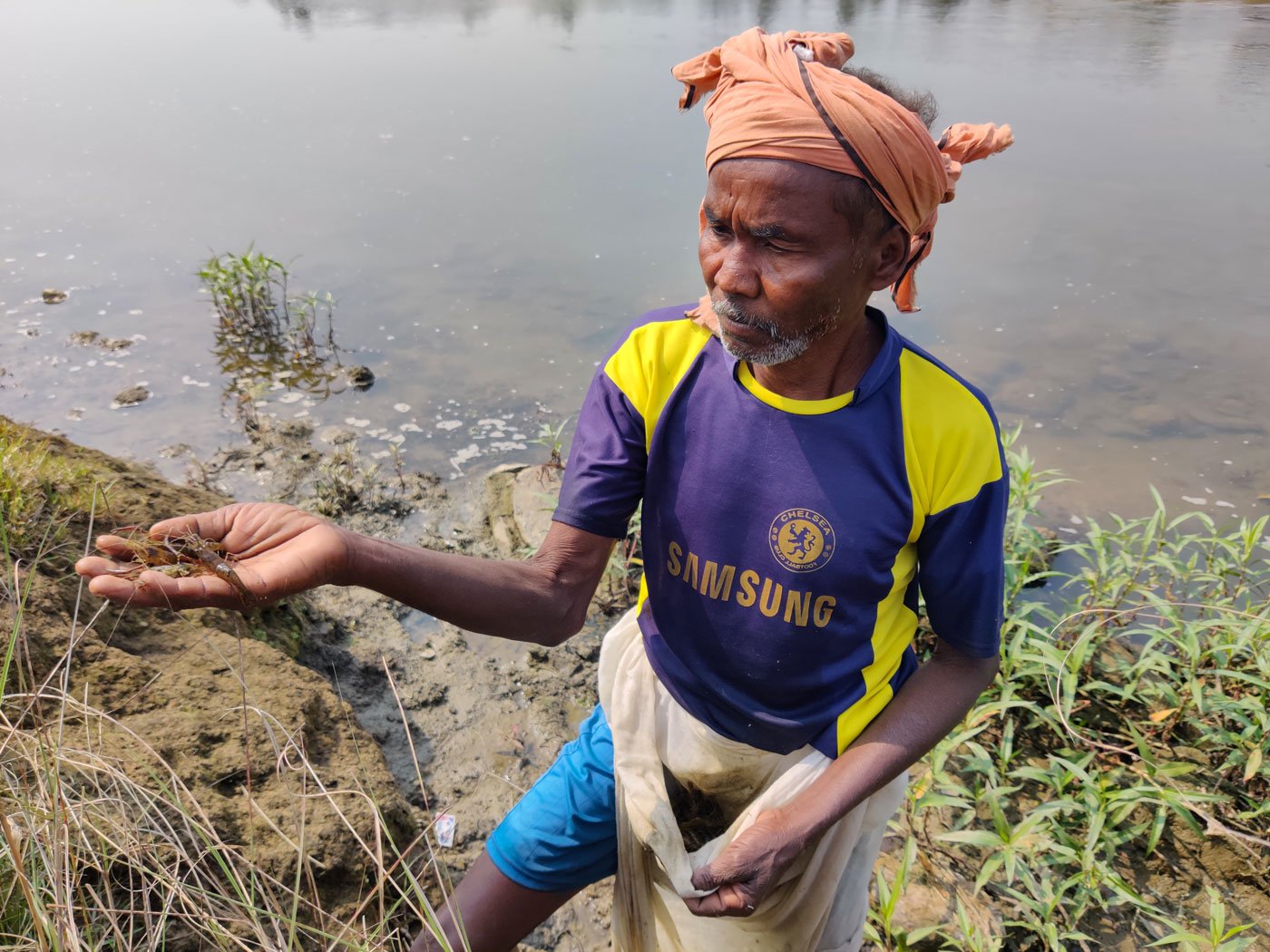 In West Bengal’s Puruliya district, Anirudhdha Singh Patar, who loves catching prawns and fish with his bare hands, tells PARI about how the Kangsabati river is changing and why he migrates for work

“Hey! What are you doing here?” he asked, his gaze curious and tone stern.

I realised immediately that not many people visited the elevated banks of the river where I’d found him.

Anirudhdha Singh Patar leapt down the bank towards the river, when he suddenly stopped, turned around, and warned me: “They burn dead bodies in that spot. Someone died yesterday. Let’s not stand there. Follow me!”

Fair instruction, I thought, for it seemed appropriate to let the dead rest in the solitude they had earned.

Moving down the two-metre-high riverbank, I watched him as he deftly navigated the knee-deep waters of Kangsabati river, in West Bengal’s Puruliya district. Trying my best to keep pace with him, I walked fast along the bank.

His agility, which belied his age but not his skill, was awe-inspiring. I couldn’t help but ask the man, who’s in his late 50s, “ Kaka [uncle], what are you doing in the river?”

Anirudhdha loosened the white cloth he used as a waist pouch, delicately pinched out a single prawn from the rest of his catch, and said with childlike exuberance, “See the chingri [prawn]? This is going to be our [his family’s] lunch today. Stir-fried with shukno lonka and rosun , these prawns taste excellent with gorom-bhat .” Prawns, cooked with dried red chillies and garlic, and mixed with piping hot rice – sounded delicious. 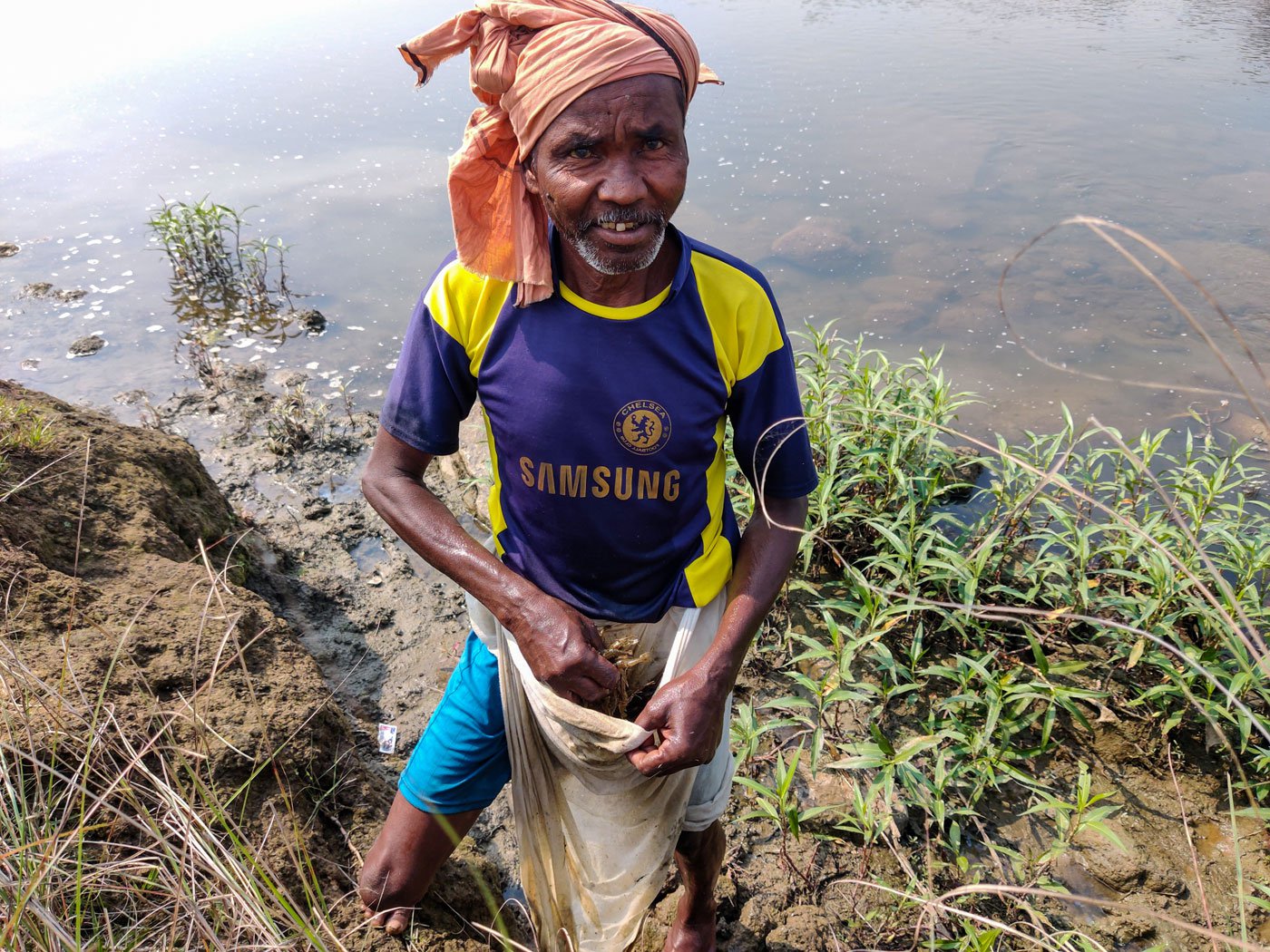 Anirudhdha Singh Patar with his catch of prawns, which he stores in a waist pouch made of cloth

For someone who catches fish – and prawns – the absence of a fishing net was conspicuous. “I have never used a net,” he said. “I use my hands. I know where they [the fish] are hiding.” Pointing to the river, he continued, “See these edges of the stones, and the water weeds and algae beneath the river? These are the homes of the chingri s.”

I peered into the river and saw, concealed in the weeds and algae were the riverine prawns that Anirudhdha was talking about.

We revisited the conversation about his lunch, which is when he explained from where the rice for the meal would come. “If I work hard on our little piece of land that yields paddy, I somehow manage enough rice for a year’s khoraki [consumption] of my family.”

The family, which lives in Kaira village, in Puruliya’s Puncha block, belongs to the Bhumij community, a Scheduled Tribe in West Bengal. Adivasis constitute more than half the village’s population of 2,249 (Census 2011), and they depend on the river and for food.

Anirudhdha does not sell his catch – it is reserved for his family’s consumption. Fishing is not work, he says, it’s something he loves to do. But his voice became gloomy when he said, “I go to faraway lands to earn a living.” His search for work  has taken him to Maharashtra and Uttar Pradesh, most of the times as a construction worker, and also other jobs.

He was stuck in Nagpur during the Covid-19 lockdown of 2020. “I went there with a thikadar [labour contractor] to work on a building project. It was very hard to manage in those days,” he recalled. “I returned a year ago and have decided not to go back as I am aging now.”

Men from Puruliya district migrate to Maharashtra, Uttar Pradesh, Kerala and other states, and also within the state , in search of work, said Amal Mahato, a Kaira resident in his early 40s. They do this to repay the loans they take to bear farming costs, said the teacher, who used to be a reporter with a local newspaper. In their absence, he added, women tend the fields to ensure food for the families. “It's a vicious cycle for small landholding Adivasi families. They take loans from the mahajans [moneylenders],” explained Amal. 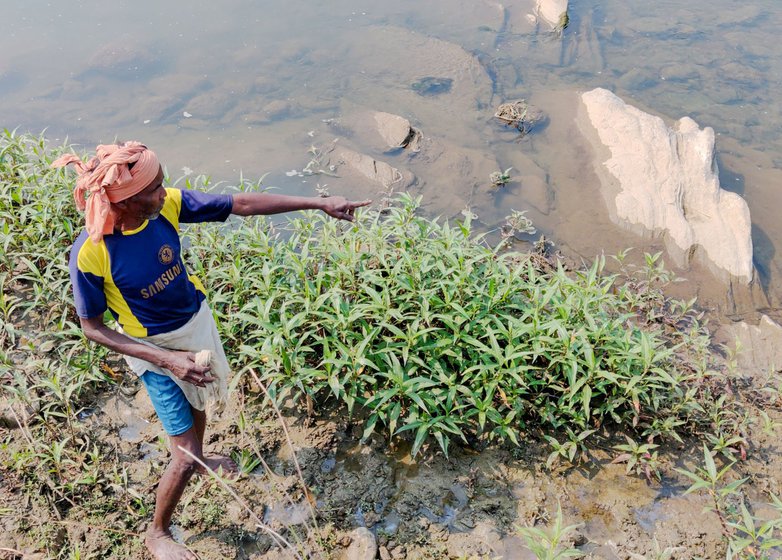 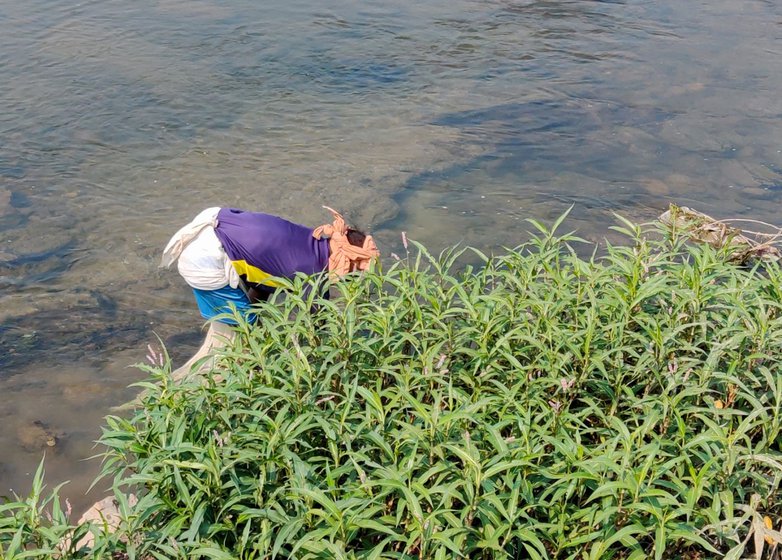 Left: Anirudhdha pointing to places where prawns take cover in the river. Right: Wading the water in search of prawns, he says, ‘My father taught me the tricks of locating and catching them with my bare hands ’

Anirudhdha has had to pay off the loans he’d taken for agricultural inputs like fertilisers and seeds. In Nagpur, where his work involved mixing the cement and mortar, and carrying heavy loads, he earned about 300 rupees a day. But wage work in Kaira has not been as remunerative. “We have to sit idle when there is no work,” he said. When he manages to find some work in the fields during sowing and harvesting seasons, the daily wage is 200 rupees or less. “Some days, I get work [in Kaira] when the people who have taken royalty of the rivers come here with lorries to dig sand. I earn 300 rupees [a day] for carrying sand from the river to the lorries.”

By ‘royalty’ Anirudhdha means the leases given for mining sand along the Kangsabati riverbed. The extraction has been indiscriminate, and often in violation of the guidelines for sustainable sand mining. Aided by a nexus of politically powerful persons, sand smuggling is rampant along the riverbed, the villagers said. But the trade ensures a few days of wage work for villagers like Anirudhdha Singh Patar – who seemed to be unaware of its illegal nature.

He was, however, aware of the adverse impact of the “royalty business” on the environment. He said it was “ bishal khoti nadir ”, a huge blow to the river. “They are taking the sand that took years to form.”

“There used to be plenty of fish in the river,” continued Anirudhdha, naming the baan [Indian mottled eel fish], shol [snakehead murrel], and maagur [walking catfish]. “The jele s [fisherfolk] used nets to catch the fish back then. Now they don’t come here. They have moved to other spots upstream and downstream.” He seemed angry with the “picnic parties” that pollute the riverbanks with plastics, empty bottles and thermocol plates.

He was wading the river comfortably in search of prawns. “When we were kids, chingri s were aplenty in the river,” Anirudhdha said. “My father taught me the tricks of locating and catching them with my bare hands. Baba amar birat machhowal chhilo [My father was a great fisherman].” 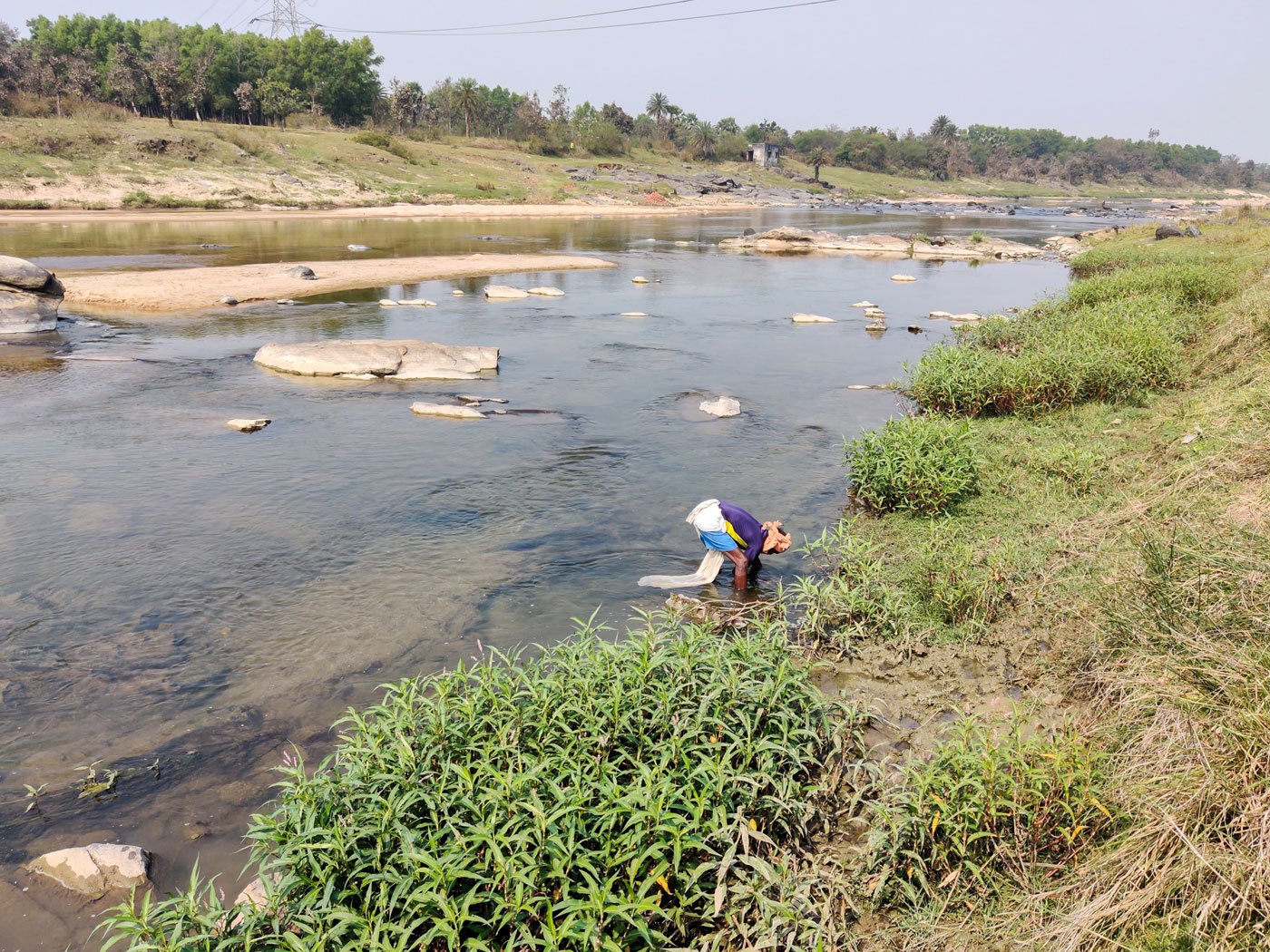 Kangsabati river, which flows through Kaira in Puruliya's Puncha block, is a major source of food for Adivasi families in the village

Picking up chingri after chingri , he said, “It takes a lot of work to clean the prawns, but they taste so good.” However, neither the river nor the chingri s are the same anymore, he added. “You see those fields near the river where they cultivate mustard and paddy? They spray all sorts of fertilisers and pesticides on the crops and then wash those jerricans in this river water. The contaminated water kills the fish. Chingri s are becoming scarce...”

Shubhankar Mahato, who had come to take a dip in the river from Pirra village, 5-6 kilometres from Kaira, echoed Anirudhdha's words. “The rivers once provided both livelihood, and ample source of protein and other vital nutrients, to the landless, small and marginal landholding Adivasis living near the river – who otherwise could not afford to buy foodgrains.” He pointed out that Puruliya is among the poorest districts in the state.

A 2020 study estimates that Puruliya has the highest poverty incidence in West Bengal – the percentage of households in the district living under the poverty line is 26 per cent. “Families here have depended on the forests and rivers for food. But the natural supplies are becoming scarce now," said Shubhankar, who is a teacher.

Anirudhdha was looking for more prawns when I asked him about his family – for whom he was painstakingly catching the crustaceans. “My wife does the household chores and works in the fields. My son too works on our land,” he said. He lit up when talking about his children. “All my three girls are married [and living away]. I have only one child with me now, and I am not sending him anywhere [to work], neither am I going to those distant places.”

While parting from Anirudhdha, I imagined him enjoying a hard-earned meal at home with his family, and remembered the biblical verse, “And wherever the river goes, every living creature that swarms will live, and there will be very many fish.”