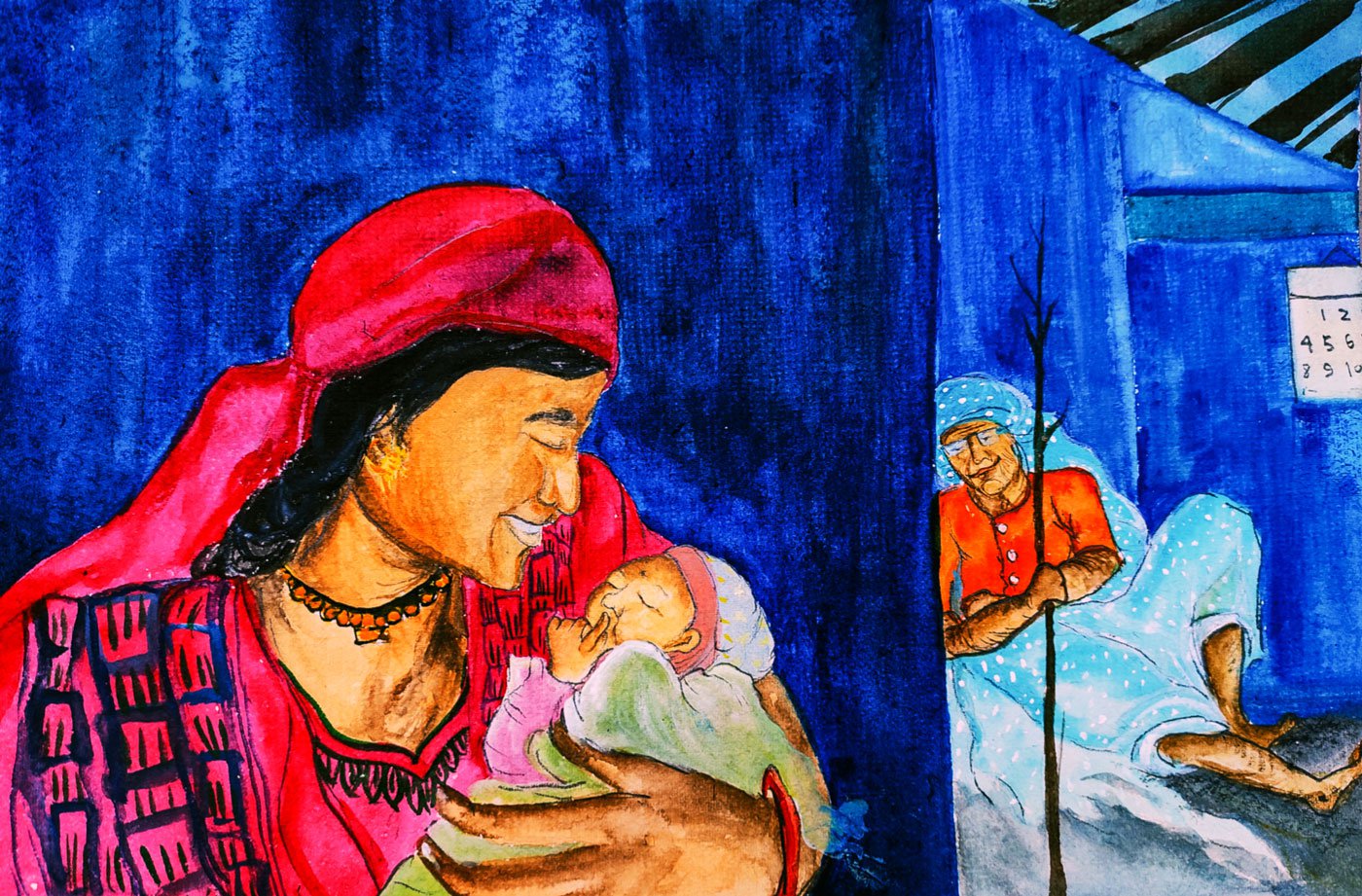 In Almora, moving mountains for childbirth

Last year, Rano Singh of Uttarakhand’s Almora district gave birth on the road, halfway uphill to a hospital, in a region where the terrain and expenses compel many in the mountain hamlets to deliver at home

When her labour pains began, 23-year-old Rano Singh, her husband and mother-in-law  hurried out of their small hillside house. It was dawn, around 5 in the morning. Before them was 1.5 kilometres of uphill terrain, which would take them to the main road, where a hired vehicle was waiting to take her to a private hospital in Ranikhet, roughly 12 kilometres from their village, Siwali.

They had tried arranging for a doli –pregnant women in their Thakur community here are carried uphill in a palanquin by four men, each holding one corner. This doli takes her to the road and, usually, to a waiting vehicle which will take her to the hospital. But there was no doli that morning, and they started walking.

Rano made it only halfway up. “We had barely covered half the distance when I realised I could not move [due to the pain]. The moment I gave up walking and sat on the road, my husband understood and rushed to a family nearby. They are known to us, and chachi came with some water and a bedsheet in 10 minutes. And I delivered with the help of my mother-in-law and chachi .” (Rano’s husband is 34 and works as a helper in a ration shop, earning Rs. 8,000 a month, the only income in the family of three adults and one baby; she did not want to name him.)

“My boy [Jagat] was delivered in this jungle while we were still walking to reach the main road,” she continues, recalling the harrowing first childbirth along a narrow hilly pathway surrounded by trees. “I had never imagined a delivery like this. It still gives me goosebumps thinking about it. But thank god, my baby came out safe. That’s the most precious thing.”

That February 2020 morning, soon after Jagat was born, Rano walked back to her house, with her mother-in-law, 58-year-old Pratima Singh, carrying the baby. 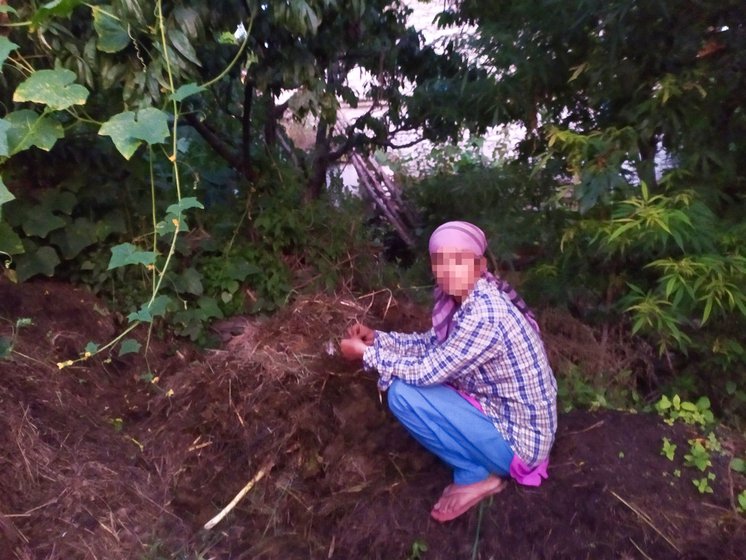 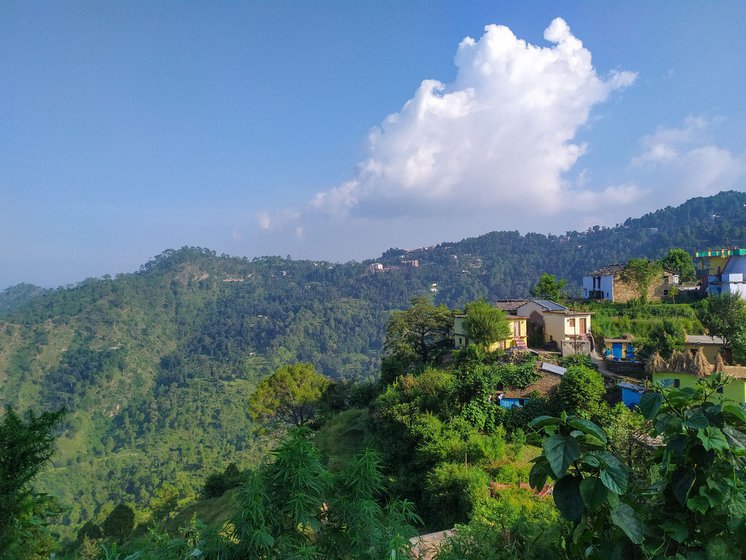 In February 2020, Rano Singh of Almora district gave birth on the way to the hospital, 13 kilometres from Siwali, her village in the mountains (right)

Rano had visited a doctor in a private clinic in Ranikhet only once in the course of her pregnancy, for an ultrasound in the second month, to check the cause of a bout of pain. Three days after her childbirth on that hillside in February last year, the local ASHA worker (accredited social health activist) visited her house. “The ASHA didi came to weigh my baby and do the required check-ups, and told us that the baby is fine. My blood pressure was fluctuating for about a week. But now I am also fit. We are used to such challenges in the pahad [mountains],” says Rano.

While the people of Siwali, Rano’s village say this kind of en-route delivery had never happened before in their hamlet of 68 households and 318 people in Tarikhet block of Uttarakhand’s Almora district, many childbirths in this uphill terrain take place at home – and at least 31 per cent across the state of Uttarakhand, notes the National Family Health Survey ( NFHS-4 , 2015-16). However, the number of deliveries in a health facility (mainly state-run institutions), has more than doubled too – from the 33 per cent recorded in NFHS-3 (2005-06) to 69 per cent (or just over two-thirds of all births in Uttarakhand).

Still, in the hilly Kumaon region, it remains a challenge, says a gynaecologist who practices in Ranikhet, for the woman and her family to go to the hospital. The nearest motorable road is usually far away, transportation is scarce, and hiring vehicles is expensive.

And last year, the pandemic-driven lockdown created further hurdles for pregnant women in the villages of Tarikhet block. Around 22 kilometres from Rano’s village, in Pali Nadoli village, Manisha Singh Rawat gave birth to her daughter at home in August 2020. The delivery was assisted by a dai or traditional birth attendant, known to her family. “I did not go to the hospital. My daughter was born here on August 14 [2020],” she says, pointing to an adjoining room in her house. One leg of the bed in that room stands on a pile of bricks. A wedding photograph of Manisha and her husband, 31-year-old Dheeraj Singh Rawat, hangs on a wall.

It’s a little after 8:30 a.m. on a September morning. A short while ago, Manisha has returned home with one bundle of fodder in her right hand and another on her head. Putting the bundles aside, she called out to Rani, her month-old daughter, through the traditional Kumaoni wooden window, painted blue, above her head in the split-level house: “ Cheli! Dekho kaun aya ! [My little girl! Look who’s back!].” 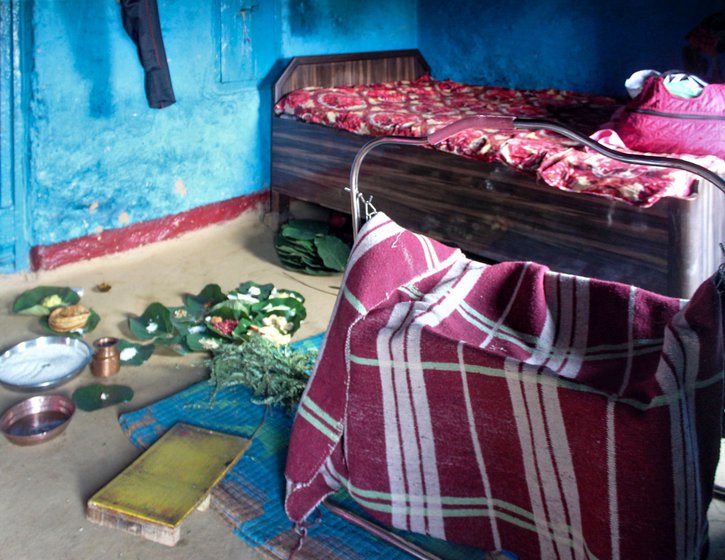 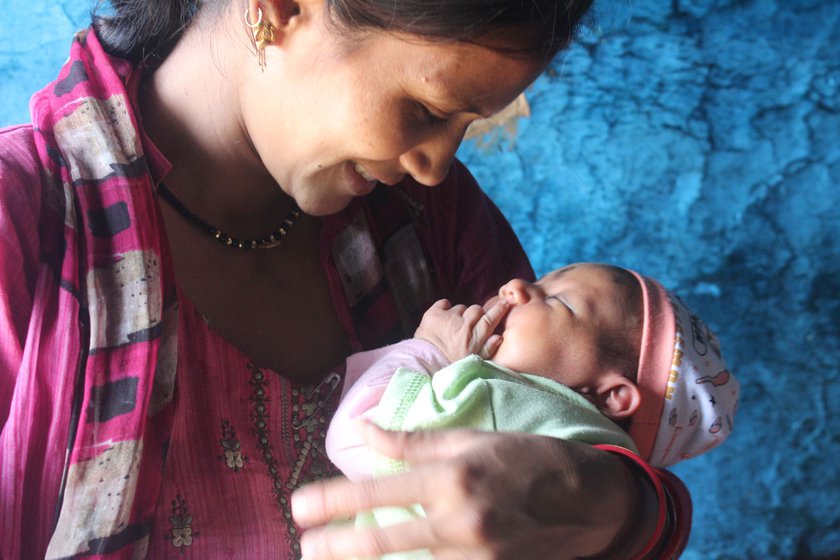 Manisha Singh Rawat gave birth to her daughter (in pram) at home, assisted by a dai or traditional birth attendant

Barely two weeks after giving birth to Rani, Manisha resumed her regular uphill trudge – for around 30 minutes across at least 1.5 kilometres in Pali Nadoli, a village of 873 people in Tarikhet block, to reach the shrub-filled area where she collects fodder for her family’s three goats. In this region, women usually walk several kilometres every day – much of it uphill – in search of water, firewood and fodder. Though Manisha manages to save on time and labour because of a handpump outside their two-room mud and cement house.

Her baby girl is sleeping in a pram whose steel handles glow golden in the light of the morning sun filtering through the blue wooden windows. “The ASHA said we should let her get some morning sunlight so she gets some vitamins. Which vitamins, I don’t know. She was underweight when the ASHA came to see her three days ago. She is supposed to visit again after a week or so,” Manisha tells me. The ASHA worker, 41-year-old Mamta Rawat, says the baby weighed 3 kilos at one month, instead of around 4.2 kilos.

Why did Manisha not opt for an institutional childbirth? “I did want to deliver in a hospital,” she replies. “There would have been some facilities there. But whatever my family decided, that is okay.”

Manisha’s father-in-law, Pan Singh Rawat, decided that he would call the dai home instead of taking her to the hospital. “He said that a lot of money [Rs. 15,000] had already been spent on my first delivery, when my son was born,” she says. Her son, Rohan, two years old, was born in a private hospital in Ranikhet, roughly 12 kilometres from Pali Nadoli village (and for that, she was carried in a doli upto the motorable road). “And the fear of corona [the pandemic was at its height in August 2020 when the baby girl was born] was also a reason to avoid all that teem-jhaam [chaos] of going to a hospital,” says Manisha. 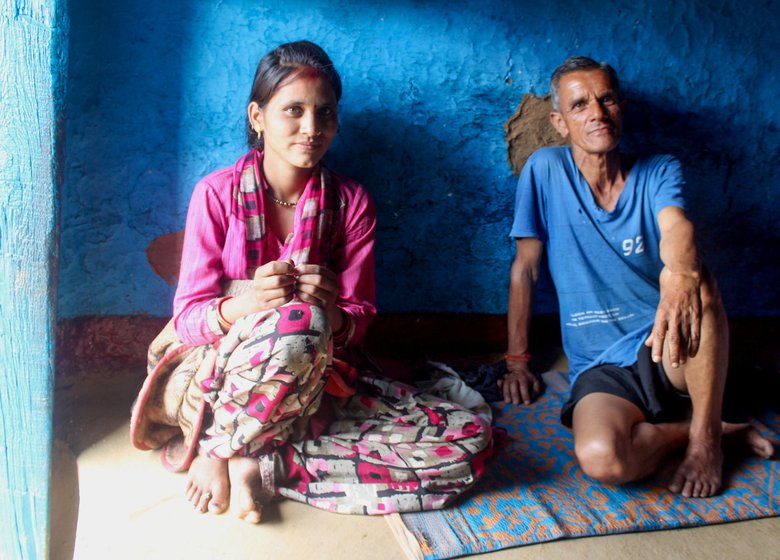 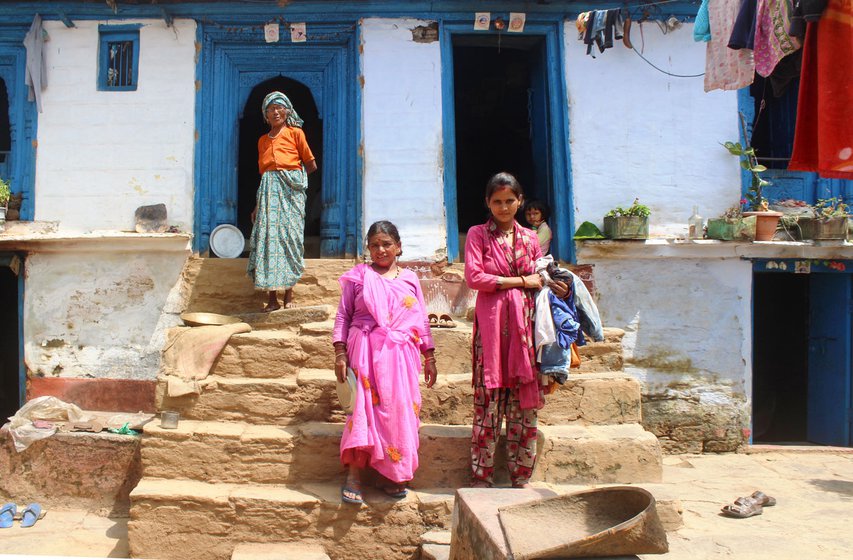 'We did not want to risk going all the way to Almora [for the delivery] in the pandemic,' says Pan Singh Rawat (left), Manisha’s father-in-law; they live in a joint family of nine

Manisha lives in a joint family of nine that includes her two children, her husband, his parents, as well as her brother-in-law, his wife and their child. She got married at the age of 18, after studying up to Class 9. Her husband, Dheeraj Singh Rawat, has studied till Class 12 and works as a driver at a local travel agency. “He takes tourists from Almora to Nainital, Bhimtal, Ranikhet and other nearby tourist spots. He usually makes around 20,000 rupees a month,” she says. With no work during the lockdown, the family managed on the savings of Manisha’s father-in-law, Pan Singh.

“We did not want to risk our lives by travelling all the way from our village to Almora [the district headquarters, some 80 kilometres away] during this pandemic. So we got the delivery done here in our house,” explains 67-year-old Pan Singh, who retired some years ago from a blue-collar government job in Ranikhet. “Besides, to go to the hospital, we would have had to book a vehicle from the nearby market, meet it two kilometres from here, and then travel another 80 kilometres."

Were they worried about the safety of the mother and child with a home birth? “Their mother [his wife] and I are old now,” he replies. “At that time, corona had spread a lot, and by going to hospital, we would have been at risk. And this dai who came to our house is known to us, so there was less risk [of Covid transmission]. She has got many deliveries done around here, in our village and others too,” he adds.

According to NFHS-4 (2015-16), in the five years preceding the survey, 71 per cent of all births in Uttarakhand took place with the assistance of a skilled healthcare provider – which includes doctors, nurses, auxiliary nurse midwives and ‘lady health visitors’. And only 4.6 per cent of home births were assisted by skilled healthcare providers. The majority of the home births – 23 per cent – took place with the help of a traditional birth attendant ( dai ). 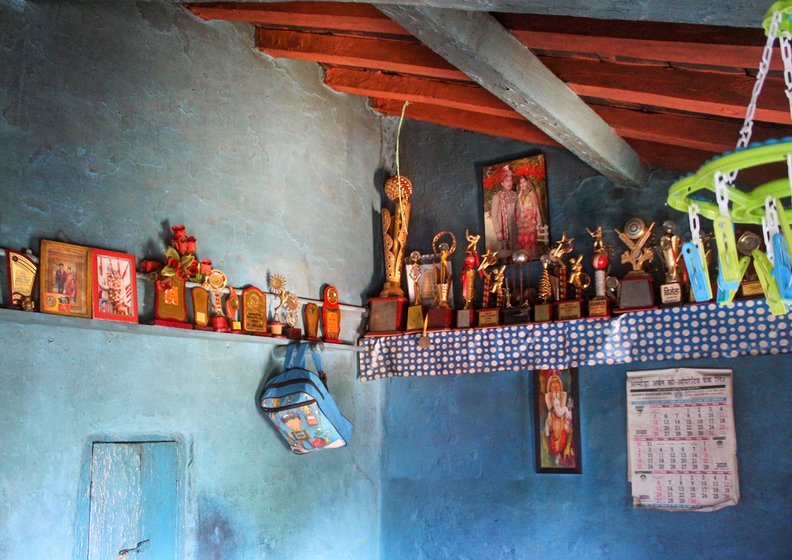 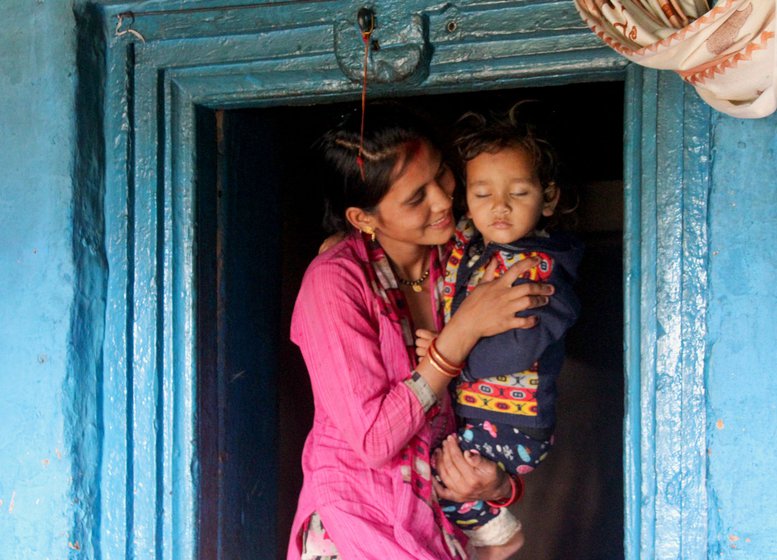 Mamta Rawat, the only ASHA worker serving Pali Nadoli, Doba and Singoli in Tarikhet block (with a total population of 1273 in the three villages) had been in touch with Manisha’s family on the phone to guide and counsel them on prenatal and postnatal care. “I took Manisha to the hospital in her first trimester of pregnancy," Mamta tells me, referring to the Tarikhet PHC, the one nearest to Pali Nadoli, where the two women went on Mamta’s scooty.

“I also spoke to her in the first week of August, barely 10 days before her delivery date, and told her to go to the hospital [the PHC has a maternity ward] with due care and precautions. When the date passed and I did not hear from her or the family, I called to check. To my surprise, Manisha had delivered at home, and my suggestions for an institutional delivery were in vain,” Mamta says, peeved that her advice was disregarded.

Meanwhile, in Manisha’s home that September morning, the sunlight is streaming in stronger. She carries her son, Rohan, still asleep, out of his bed, and tells him, “Get up! Look, your sister is awake already.”

And then we move away from the topic of childbirth, and she proudly discusses her husband’s Dheeraj’s passion for cricket. “In the early days of our marriage, he would practice every day, but gradually, other responsibilities increased. You see all those awards and shields on the wall? They all belong to him,” she says, beaming and pointing to a shelf on a blue wall that is loaded with awards from end to end.