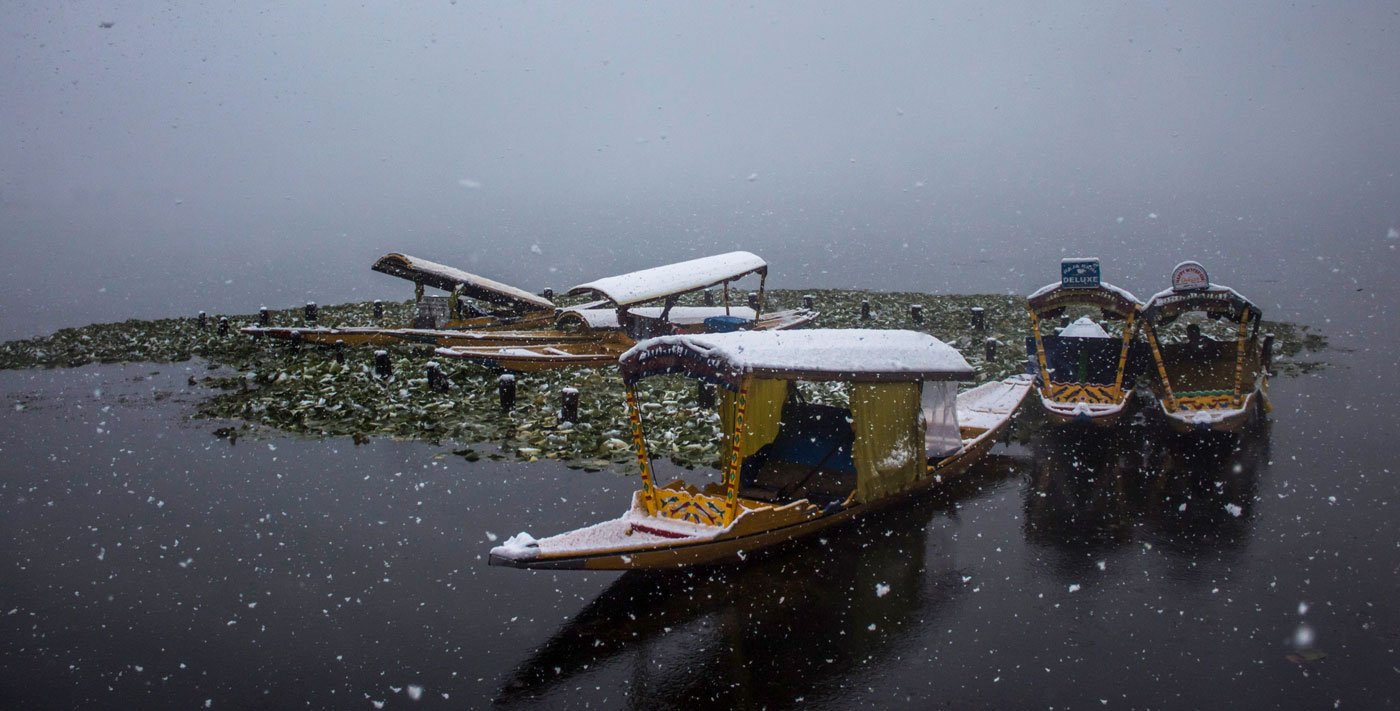 Though the government has lifted its August advisory to tourists to leave Kashmir, shikarawalas have seen few customers. The six-month tourism season sustains them all year and many are now facing a crisis

Gulzar Ahmad Bhat is sitting quietly on a wooden bench at Ghat No. 15 of Dal Lake. Like other shikara rowers in Srinagar, he has seen barely any customers since August 2, when the Jammu and Kashmir government issued an advisory to tourists to leave Kashmir Valley immediately. “That made our future uncertain. In my 18 years here, I have never seen such bulk bookings [getting cancelled],” says 32-year-old Gulzar.

A few visitors have trickled in for shikara rides after the government lifted the advisory on October 10. Most of them were brought by travel agents and they drove hard bargains. “We ask for Rs. 600 [the officially-approved rate] for a one-hour shikara spin over the waters of the Dal Lake if the customer comes directly to us. For the same ride an agent gives us us only Rs. 250. In these times, we cannot even refuse,” says 42-year-old Mehraj-Ud-Din Paktoo, who was still waiting for visitors in mid-November, still hoping to be able to see his family through the cold winter.

The shikaras are rowed either by the canoe-owners or rented out to rowers for around Rs. 30,000 a season. A rower can expect to make Rs. 2 lakhs to Rs. 2.5 lakhs over the six-month tourism season. After rent and other costs, he is left with around Rs. 180,000. That income has to be spread across 12 months – and thins out to Rs. 15,000 a month. In off-season, the shikarawalas have no work, or they do odd jobs, and some try to catch a few fish in the lakes for sale or for their families.

The tourism season in the Valley is broadly May to October. By the first week of November and after early snowfall in Kashmir this year, the chances of more shikara -seeking visitors are even slimmer. Last year (2018), which itself was a low year for tourism, 8.5 lakh tourists – Indian and international – visited Kashmir Valley. The much-depleted numbers of this years are not yet clear.

But all the 4,800 shikaras gliding along the different water bodies of Kashmir, including Dal Lake, have suffered huge losses since August, says 60-year-old Wali Mohammad Bhat, president of the All J&K Taxi Shikara Owners Association and All J&K Shikara Workers Association. As have the 960 houseboat-owners on Dal Lake, Nigeen lake, Manasbal lake and the Jheulm river, says Abdul Rashid Kallu, general secretary of the Kashmir Houseboat Owners Association

“The losses for just the shikarawalas on Dal Lake [which has 37 ghats or small docks] are over Rs. 8 crores,” estimates Bhat. Some, he says, have taken loans from various sources to buy shikaras – a new one costs around Rs. 1.5 lakhs – and are now unable to pay the instalments. A few, Bhat adds, could not withstand the pressure of moneylenders and have sold off their shikaras to repay the loans. There is no government compensation scheme so far for families whose only means of survival is the shikara . 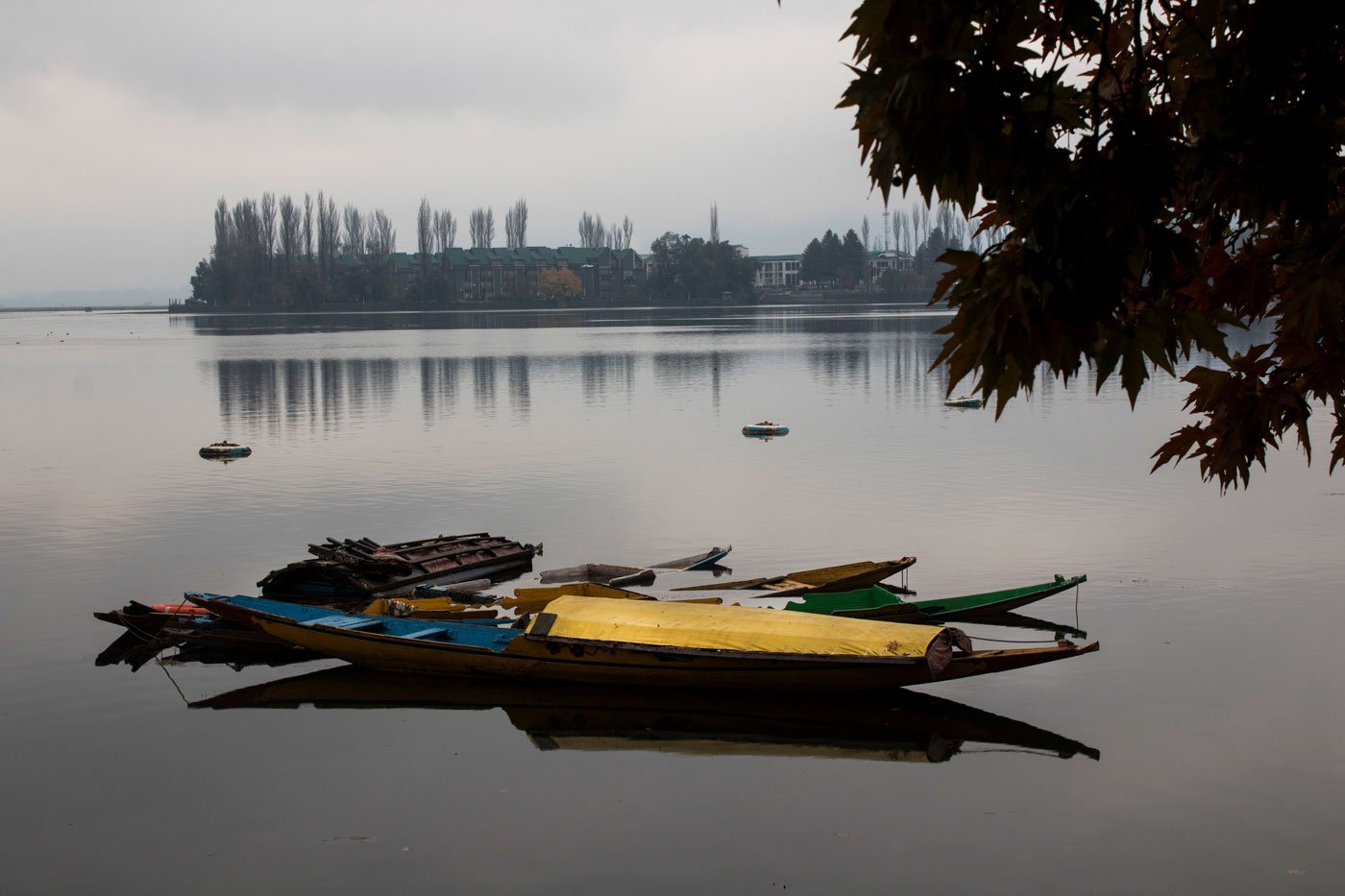 Shikaras standing still, waiting for customers on the quiet waters of Dal Lake in Srinagar 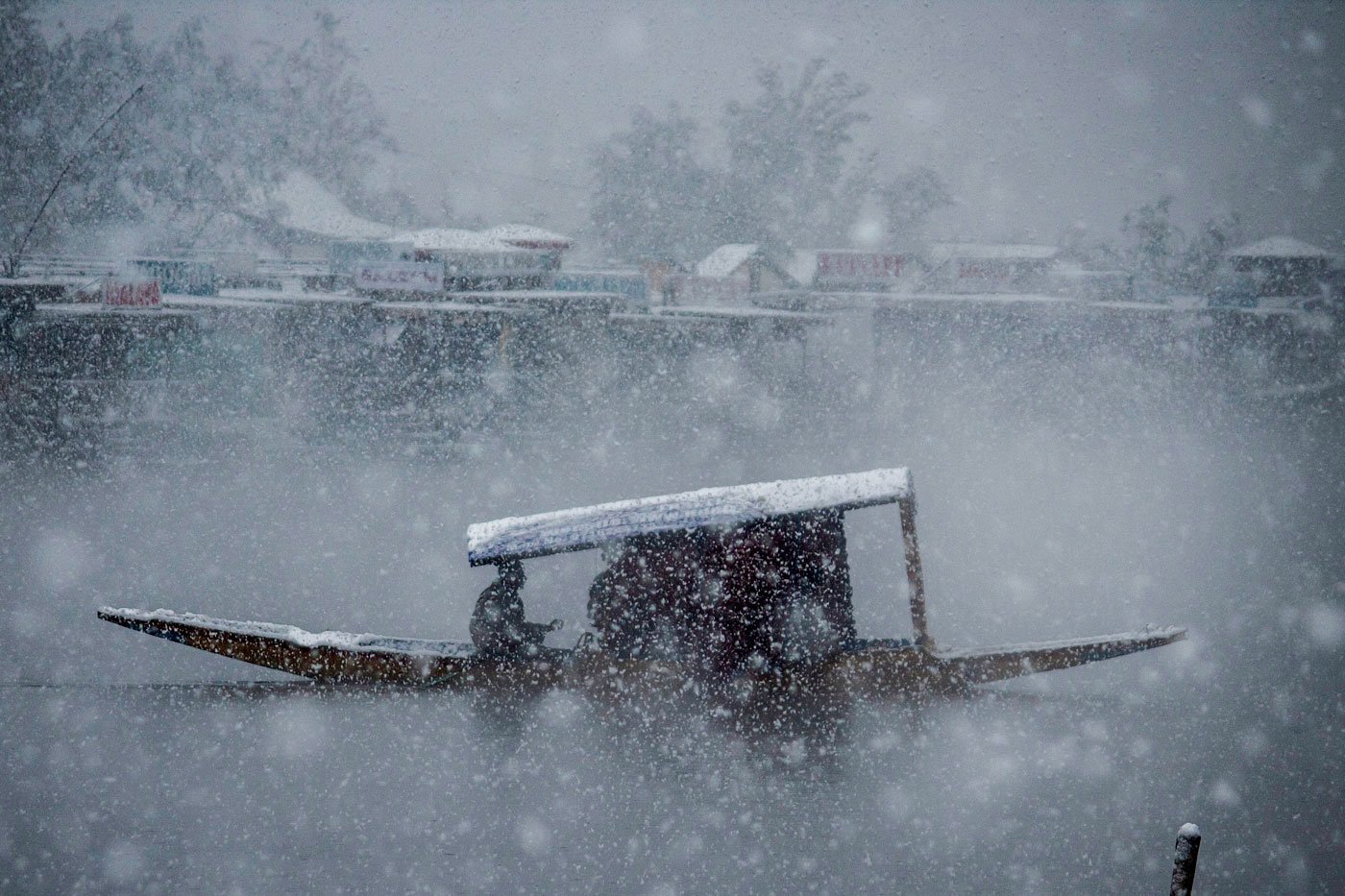 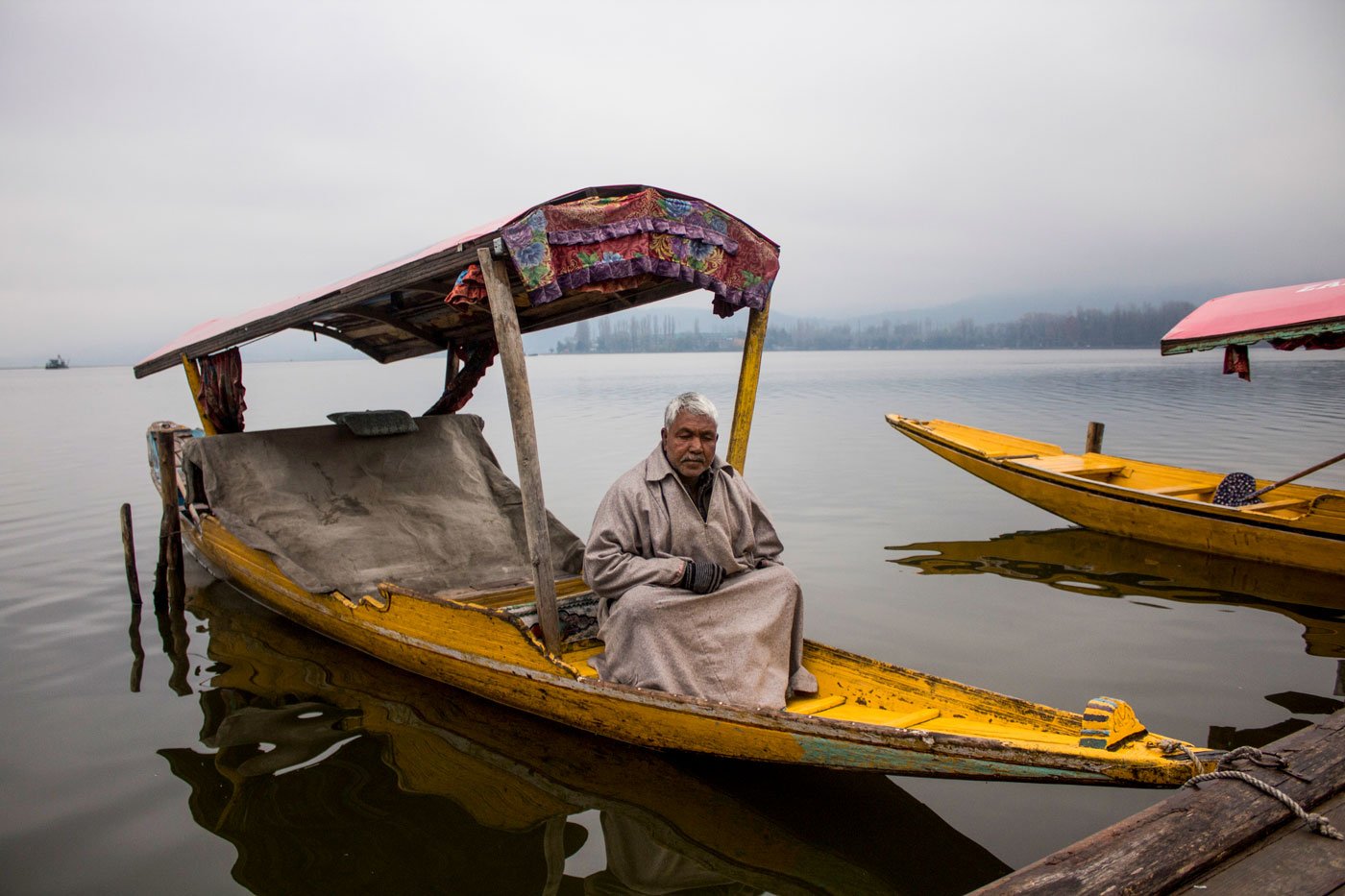 “I borrowed Rs. 3 lakhs from my friends and co-workers for my daughter’s wedding in 2017 and had repaid 1 lakh. I had hoped to repay the pending amount this season. But after August, I am in shock. I don’t know how I will pay back my loan,” says 60-year-old Ghulam Ahmad Mattoo. He sent his son Zahoor to Kerala to participate in the state’s canoe  races to try and earn something for the family 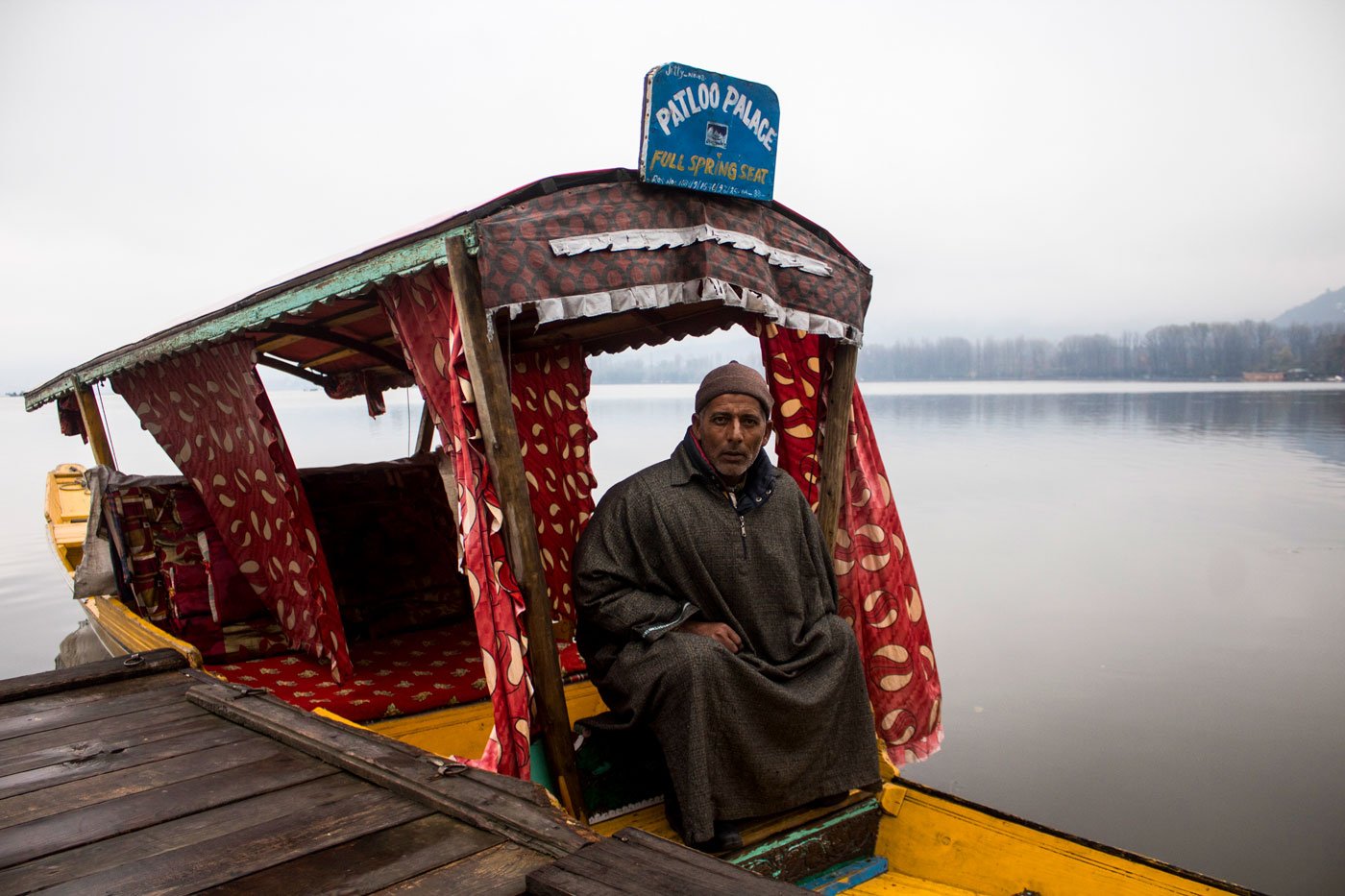 Mehraj-Ud-Din Paktoo has been rowing his shikara on Dal Lake for 20 years. “I have not got a single ride since August, after the government’s advisory to the tourists to leave the Valley. All I have is this shikara business,” he says. “And I have three children and their education [to look after]. I don’t know how I will survive this winter because what we earn in season is what we use in winter” 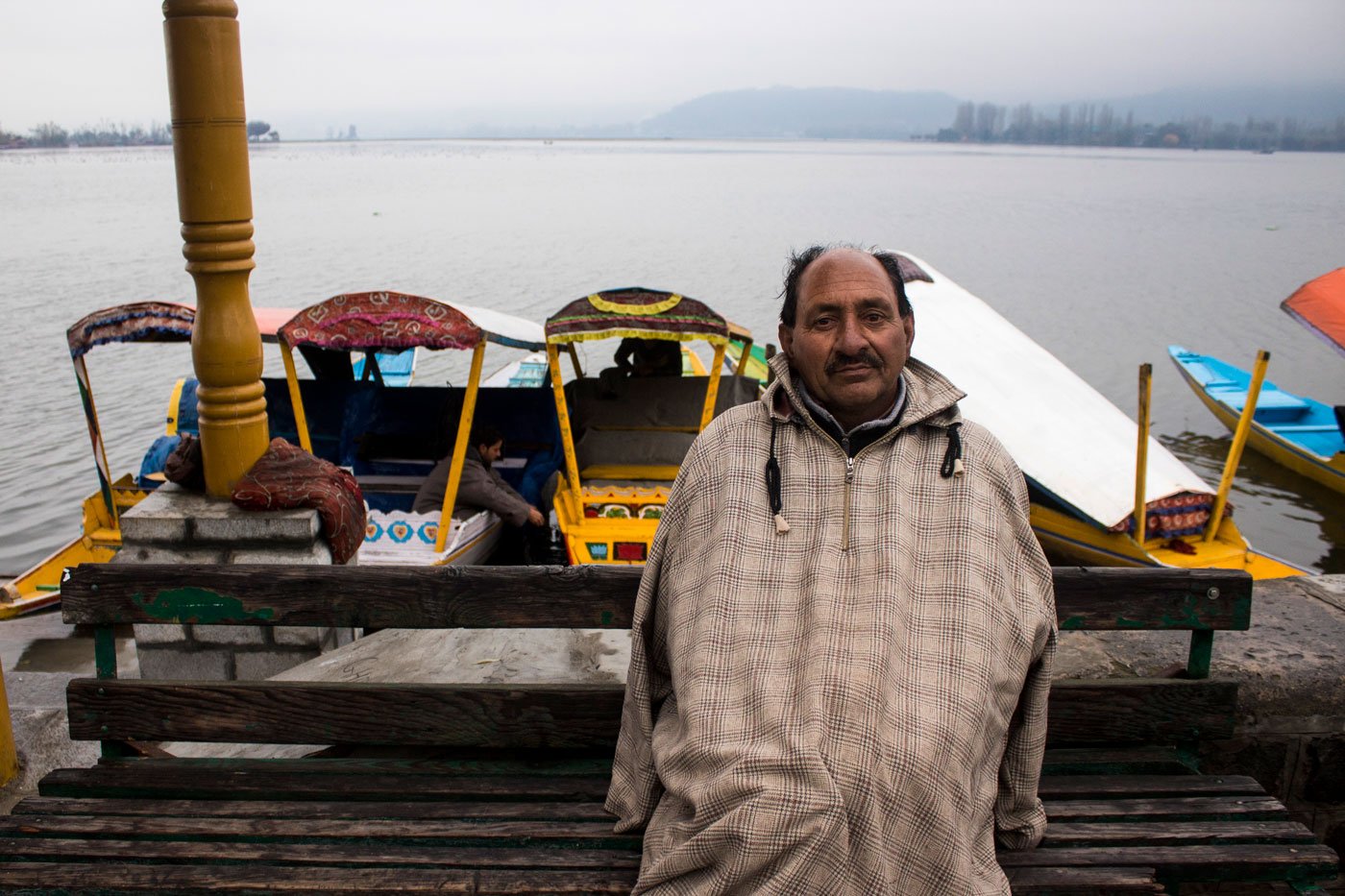 “It was a normal day for us [the day the advisory was issued]; we were ferrying tourists to different spots on Dal Lake. We thought the government’s advisory asking visitors to leave the state was a rumour. We were not aware of what was actually going to happen,” says 50-year-old Abdul Rashid Shah. “I had some savings from the previous season, which too are gone now. I am afraid that my family might starve…” 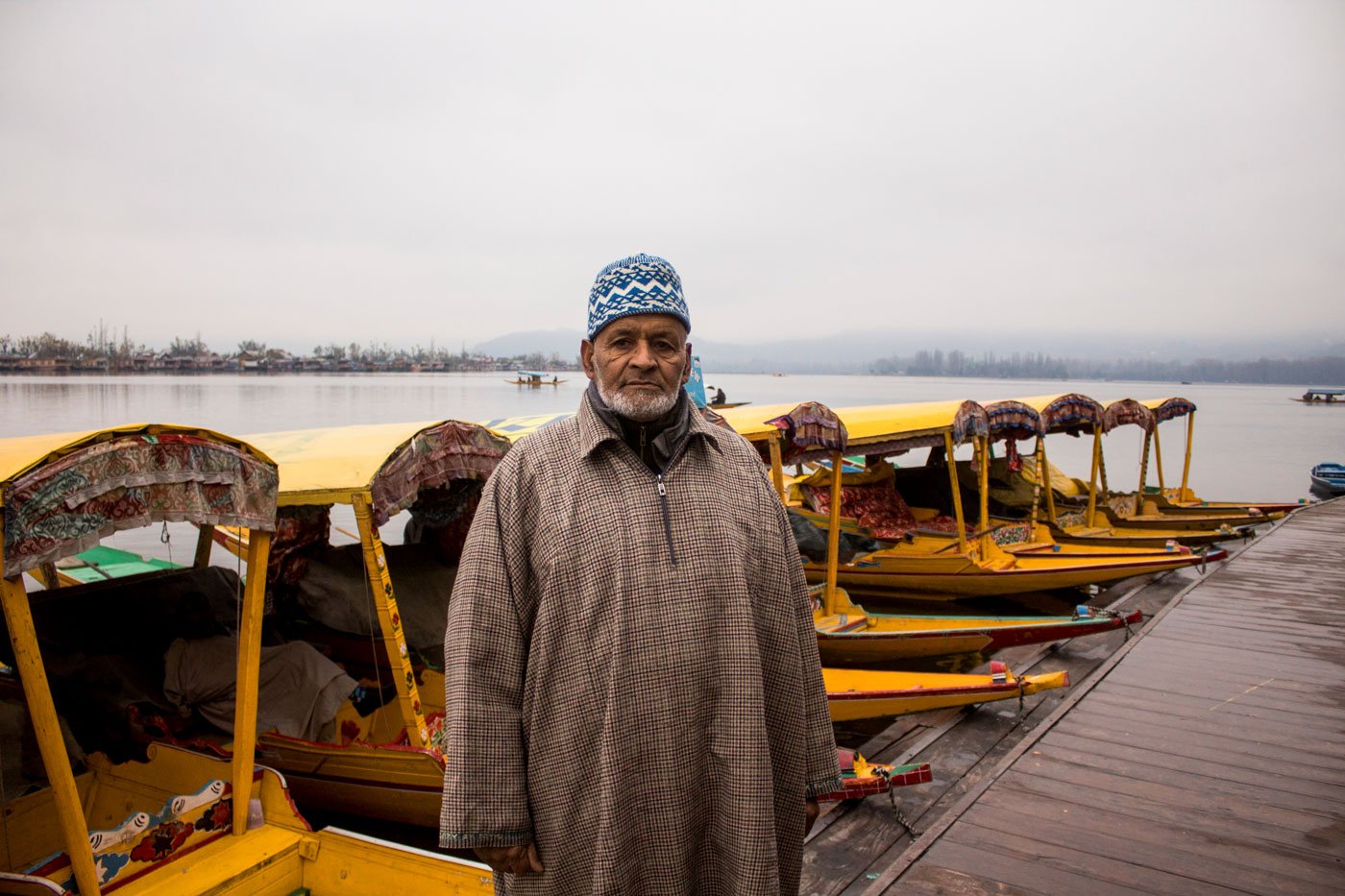 Wali Mohammad Bhat, president of the All J&K Taxi Shikara Owners Association and the Shikara Workers Association, waiting for tourists 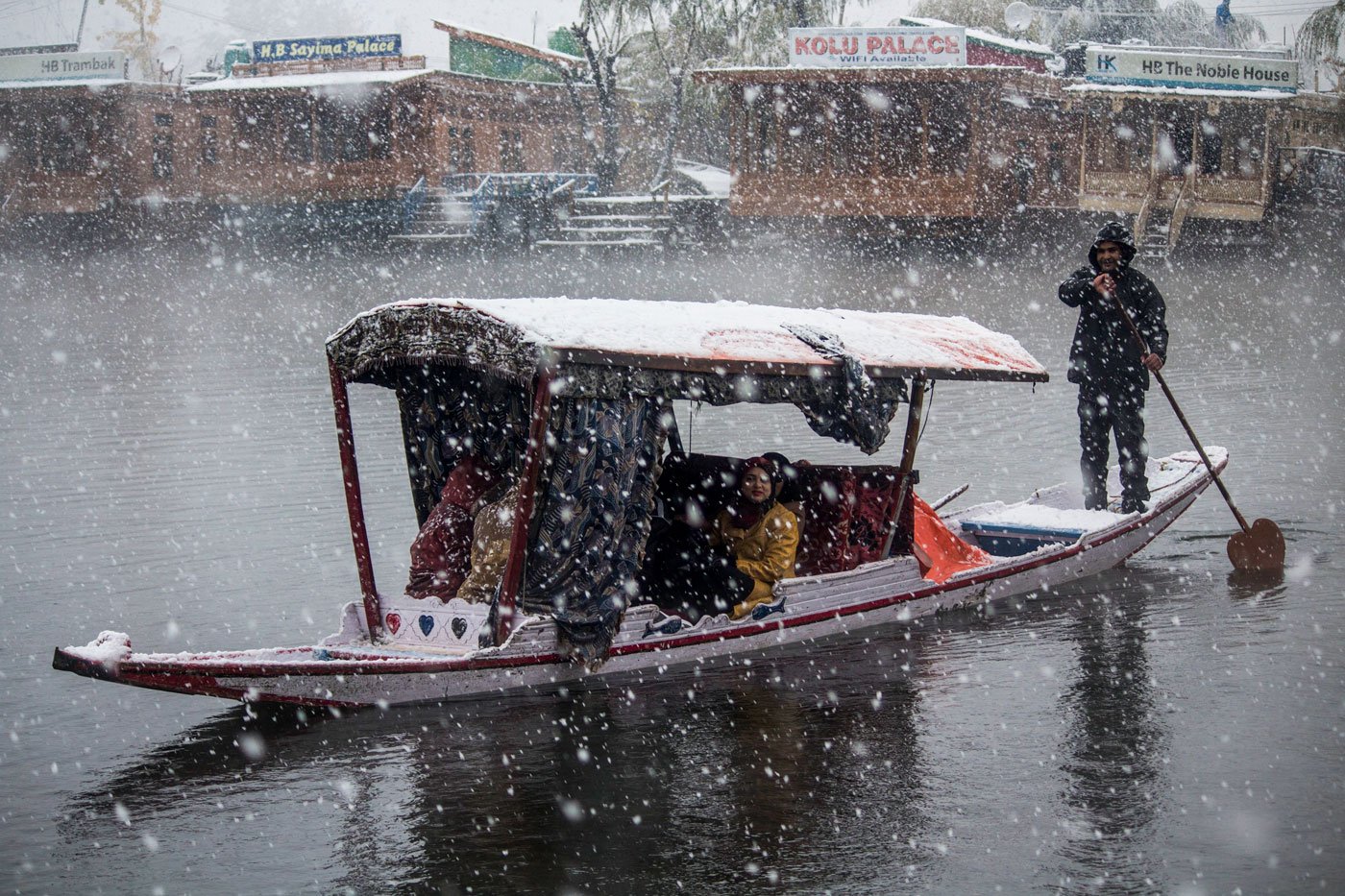 A shikara -rower (who did not want to be named) ferrying tourists from a houseboat to Ghat No. 13 on Dal Lake in Srinagar amid an early snowfall in November. He said it was only his third ride this season after the government issued its August advisory barring tourists from the Valley 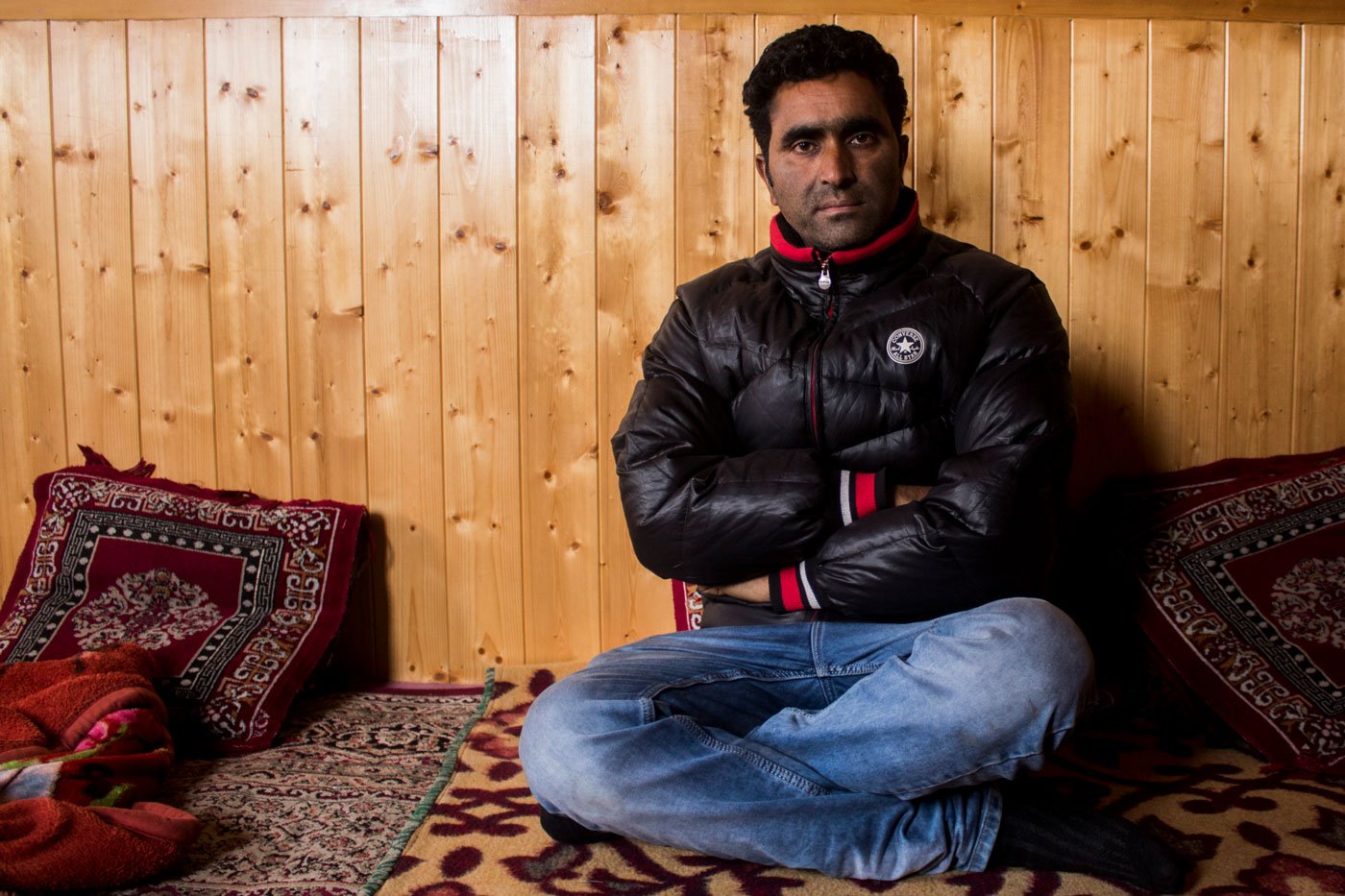 Gulzar Ahmad Bhat, 32, a shikara rower (he has featured in a well-known film titled ‘Valley of Saints’) has been in this business for 18 years. “I am afraid that we have lost the identity we had among tourists – we were famous for our hospitality,” he says. “But from August, everything has changed. We have lost our image in the rest of the country. Tourists are afraid to come to Kashmir.” How will he survive this season? “Conflict has taught us many lessons,” he replies, “and one among them is to keep saving because in Kashmir things are uncertain. We know that every 2-3 years we may have to face something worse” 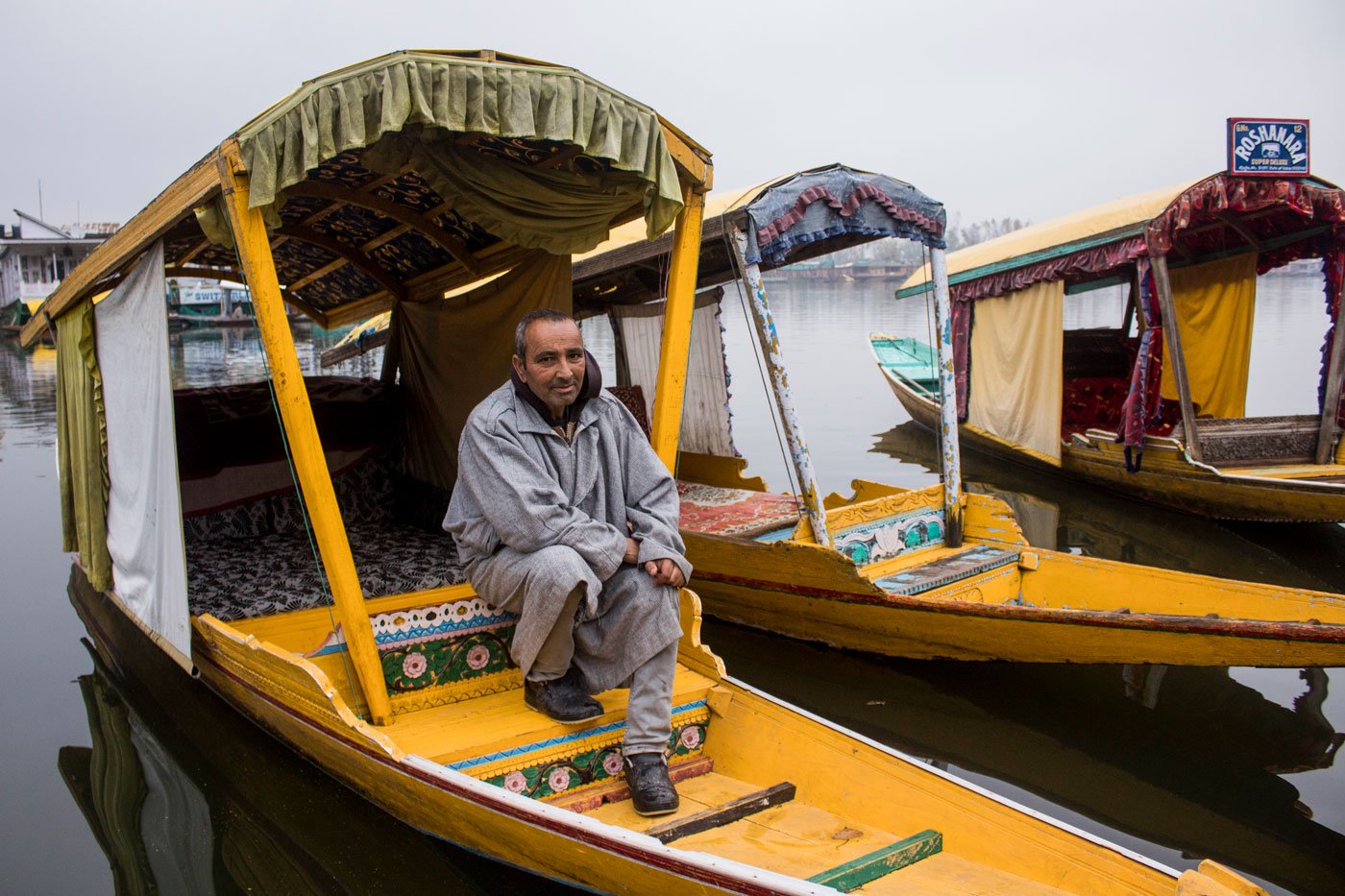 Imtiyaz Jala, 40, had purchased this shikara on loan before July 2019. The advance bulk bookings this year had given him hopes of a decent profit. But now, with the tourism season over, he is planning to sell off his shikara because he cannot repay the debt. His three daughters study in primary school. “I could not see their results [the school withheld them] because the school authorities are asking me to clear three months’ fees,” he says 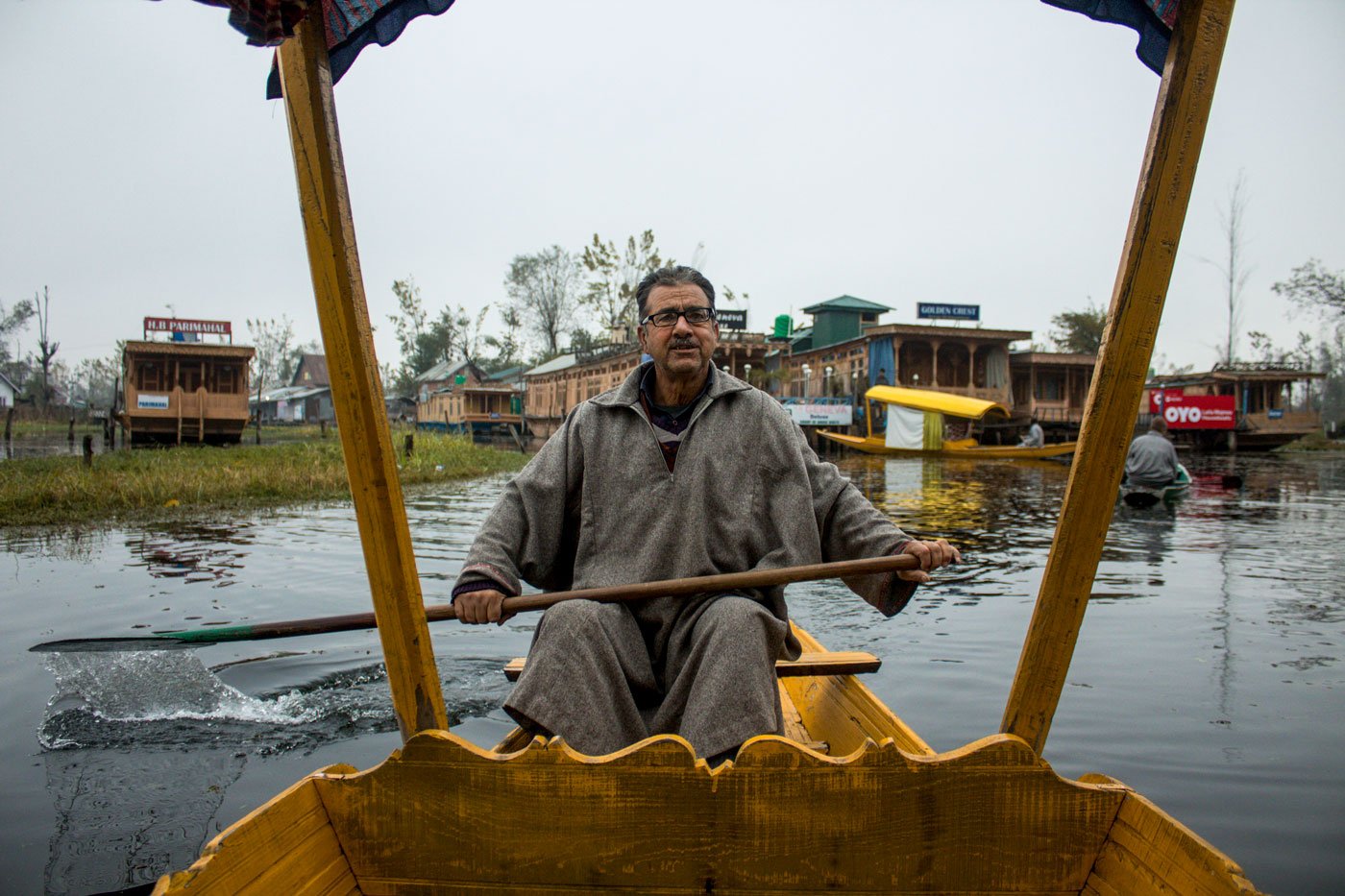 How will tourists visit a place full of the military, asks 50-year-old Mohammad Abdullah, a shikara -rower from the Rainawari area of north Srinagar. “If the government withdraws the extra troops they sent to Kashmir this year, then I hope we will still have some tourists coming here,” he says. “I wish I could see Kashmir again as it was before 90s, when there was no conflict in our region” 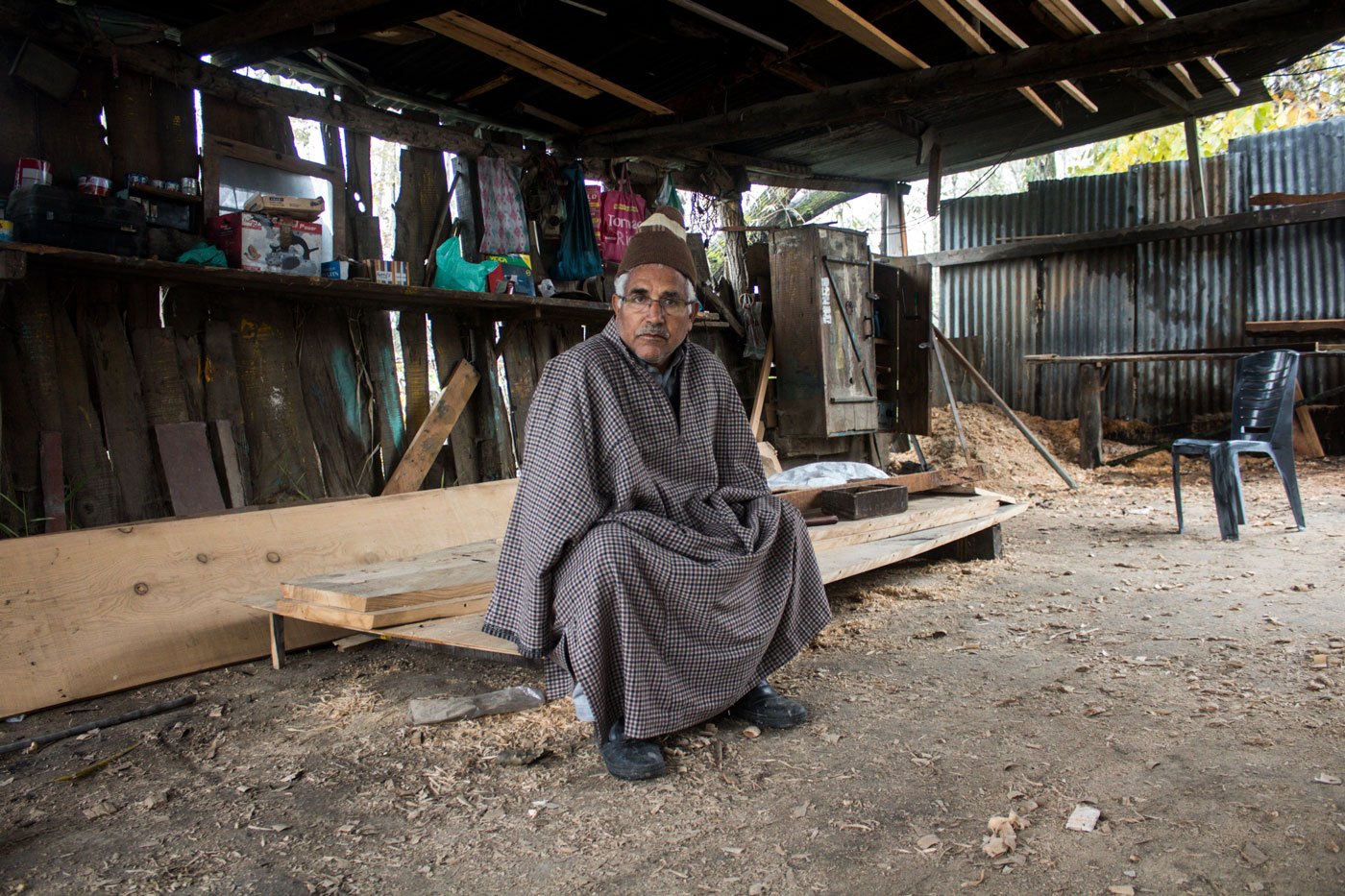 Ghulam Mohammad, a carpenter, has been making shikaras for 40 years; he inherited the craft and business from his father. “I had orders for eight shikaras before August 2019, but after the government’s advisory all my orders got cancelled,” he says 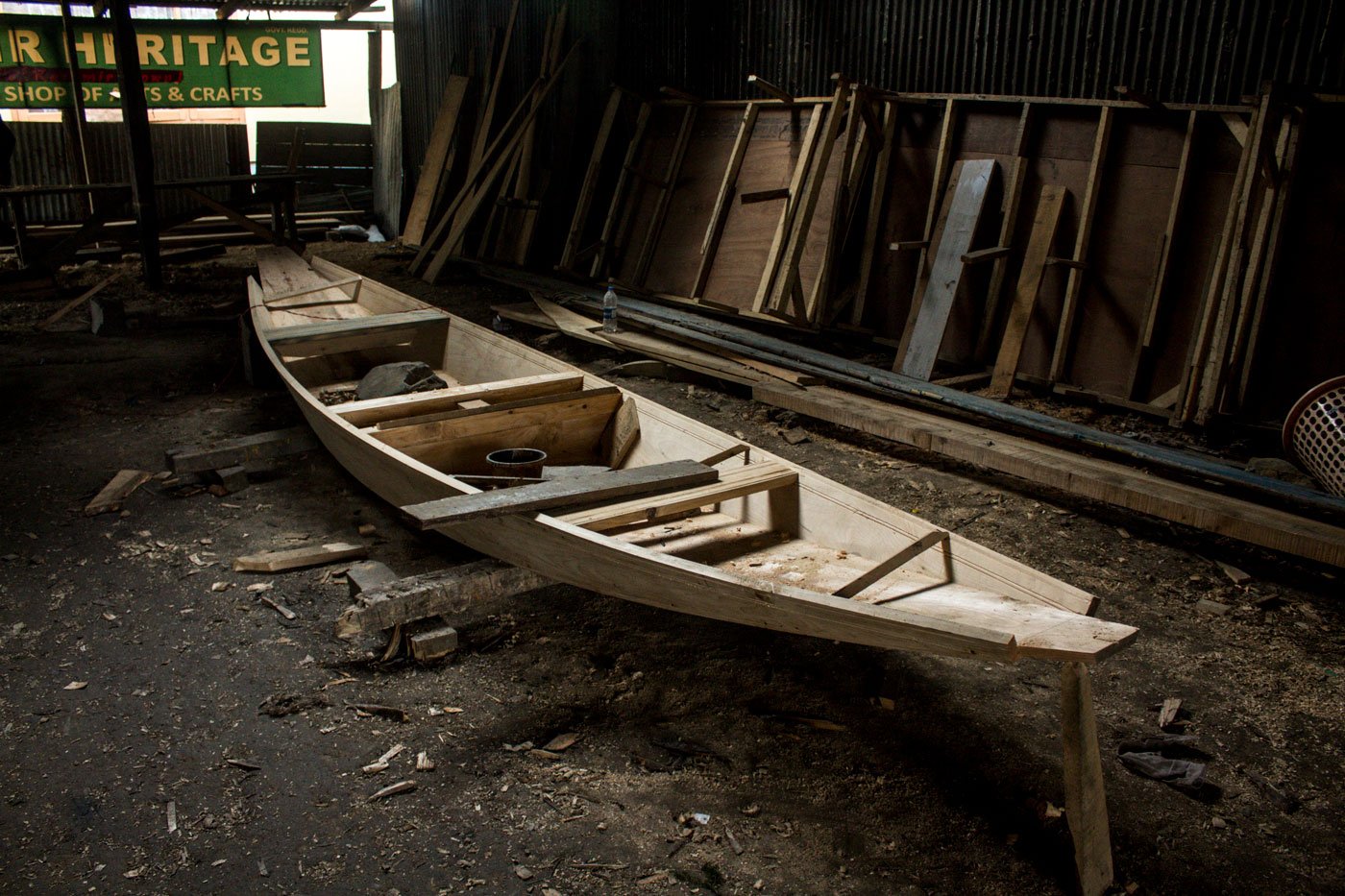 With all his orders cancelled, the deodar wood Ghulam Mohammad had purchased for Rs. 3 lakhs to make shikaras is lying in his workshop. He says: “It is very hard for people like me to survive this season” 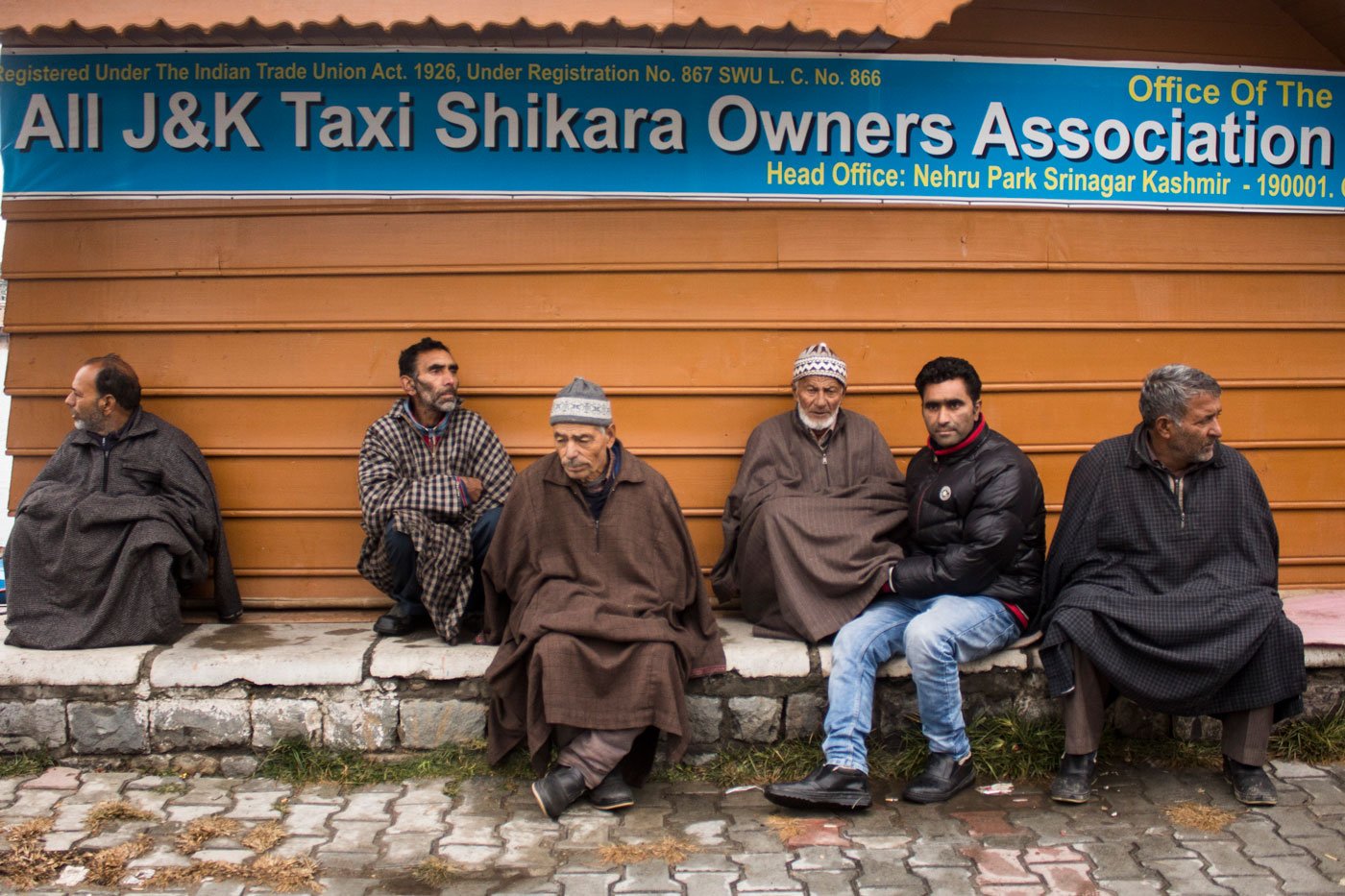 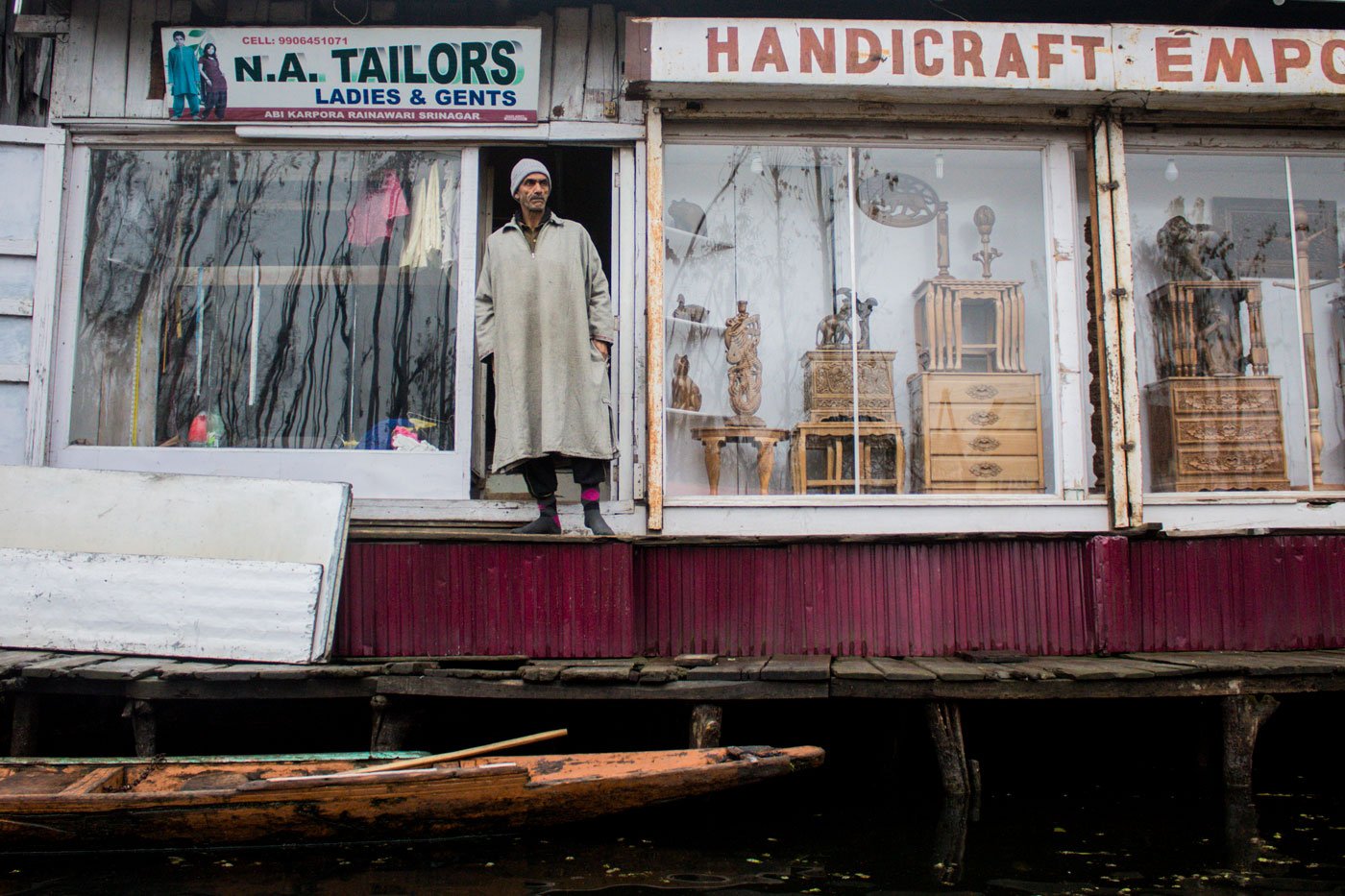 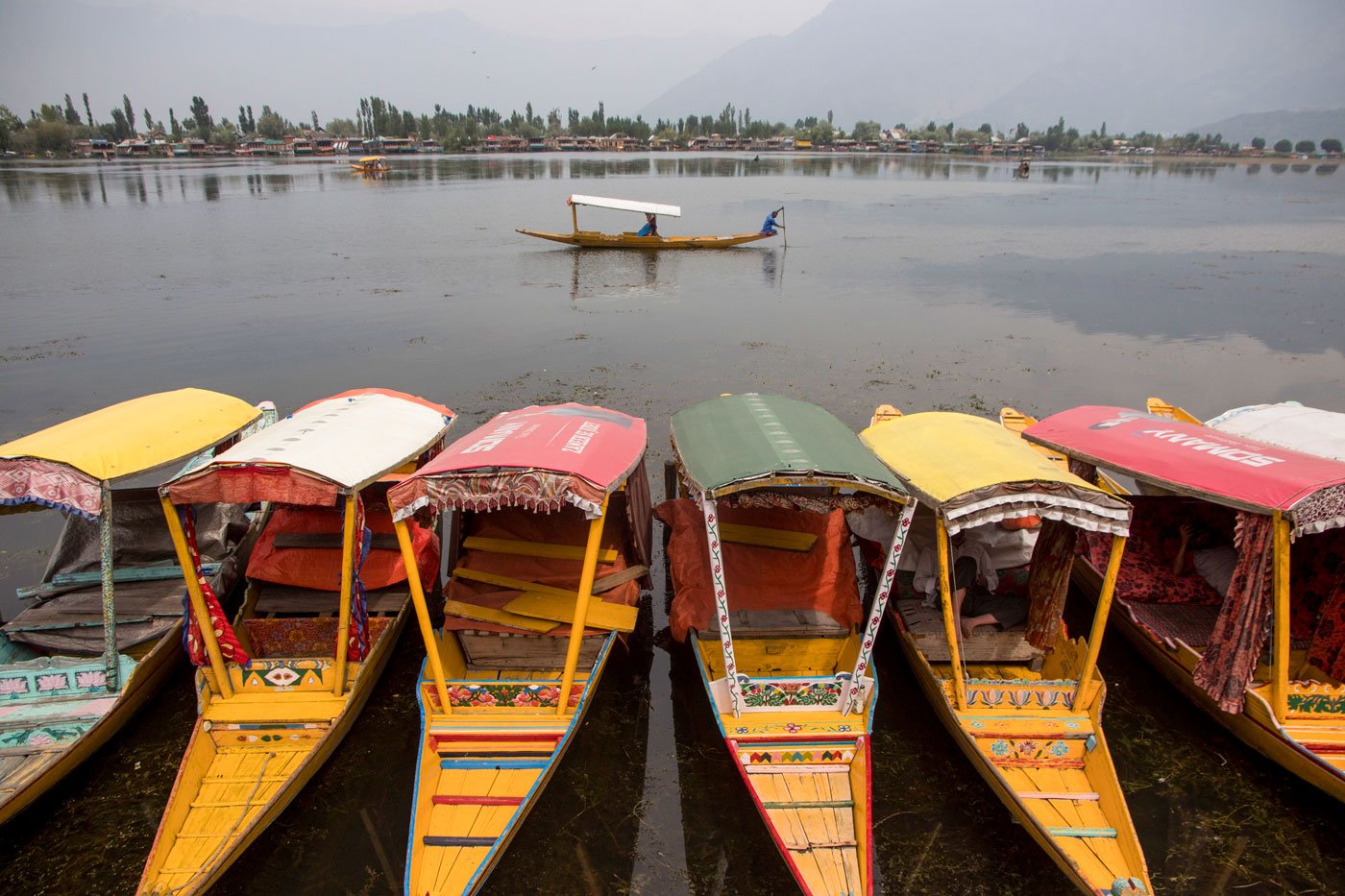 With the tourism season nearly over, and after months of waiting for visitors, the shikarawalas are now facing a long, hard and uncertain winter