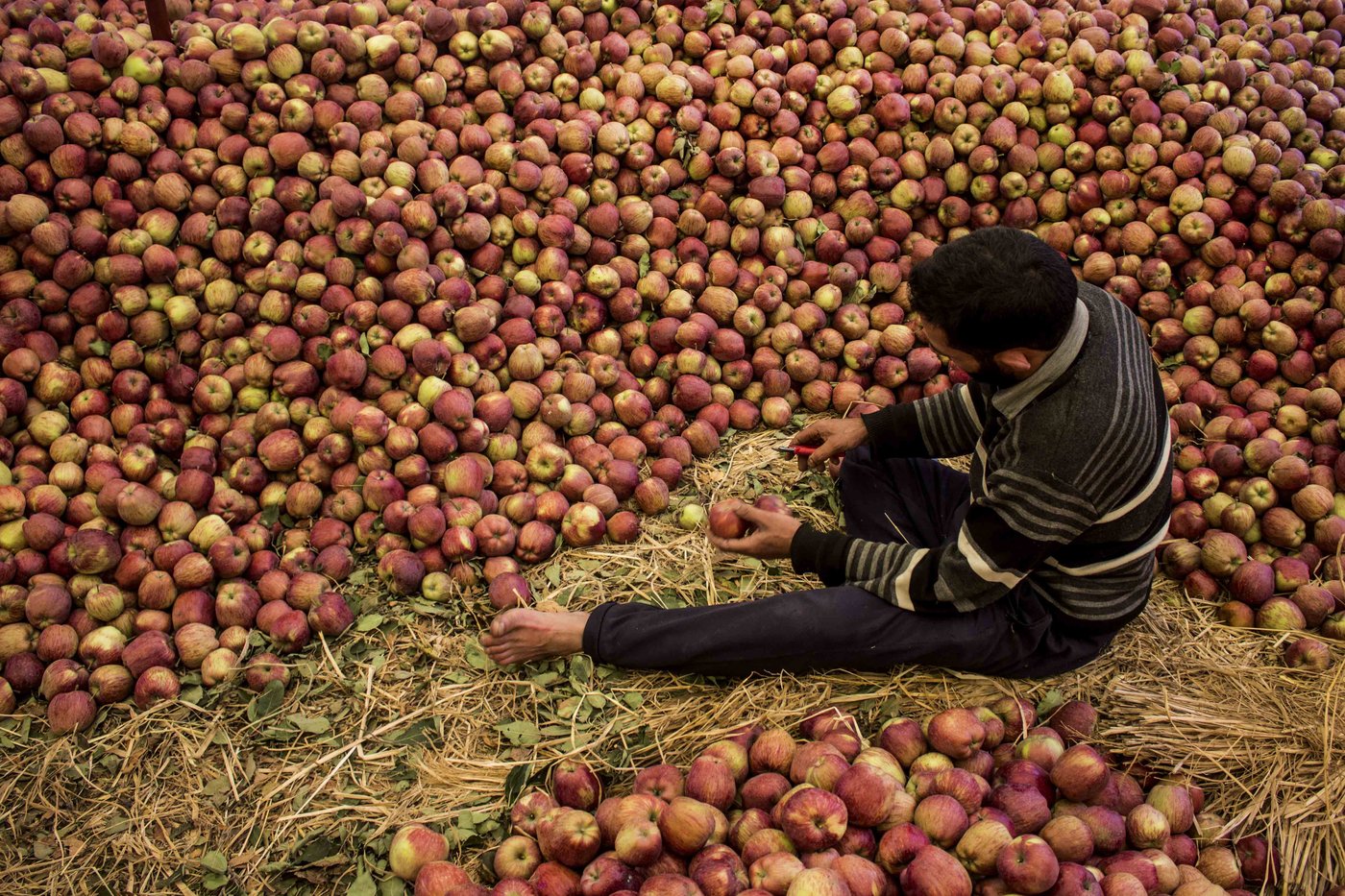 No fruit of this labour: Kashmir's apple trade

Apple orchard owners and traders in Kashmir are facing a huge loss of income amid the uncertainty that has followed the abrogation of Article 370 on August 5, which was also the start of their marketing season

Like 65-year-old Mir of Kremshora village in Budgam district, many cultivators in Kashmir are facing a similar, heavy loss of income. And the entire apple industry here is in the midst of a severe crisis since August 5, after the central government abrogated Article 370 and then turned the state into a Union Territory.

The fruit forms a major part of the local economy. Apple is cultivated on 164,742 hectares in Jammu and Kashmir, which together produced over 1.8 million (18,82,319) metric tons of the fruit in 2018-19 ( data of the Directorate of Horticulture, Kashmir). The Horticulture Department of the Government of Jammu and Kashmir estimates that horticulture (including apples) is a source of livelihood for 3.3 million people in J&K  – and the industry, Director, Horticulture Aijaz Ahmad Bhat told the media, is worth Rs. 8,000-10,000 crores.

Additionally, labourers from outside the state (now UT) find employment in orchards across the Kashmir Valley. But they left in large numbers in early August amid the political turmoil. Through October, 11 non-locals, most of them truck drivers and labourers, have been killed, allegedly by suspected militants. This has added to the difficulties of transporting Kashmiri apples out to markets in the country.

And it is equally difficult for people and produce to move within and across districts in Kashmir, with public transport, buses and shared taxis at a standstill even now.

Some of the traders who purchase apples from the orchard owners send them directly to markets in Delhi, selling them for Rs. 1,400-1,500 a box. Other traders, who sell through the government, are still waiting for the purchase to proceed. Meanwhile, some of them say that posters being pasted (it is not clear by whom) during the night forbid them from selling their apples to the government. 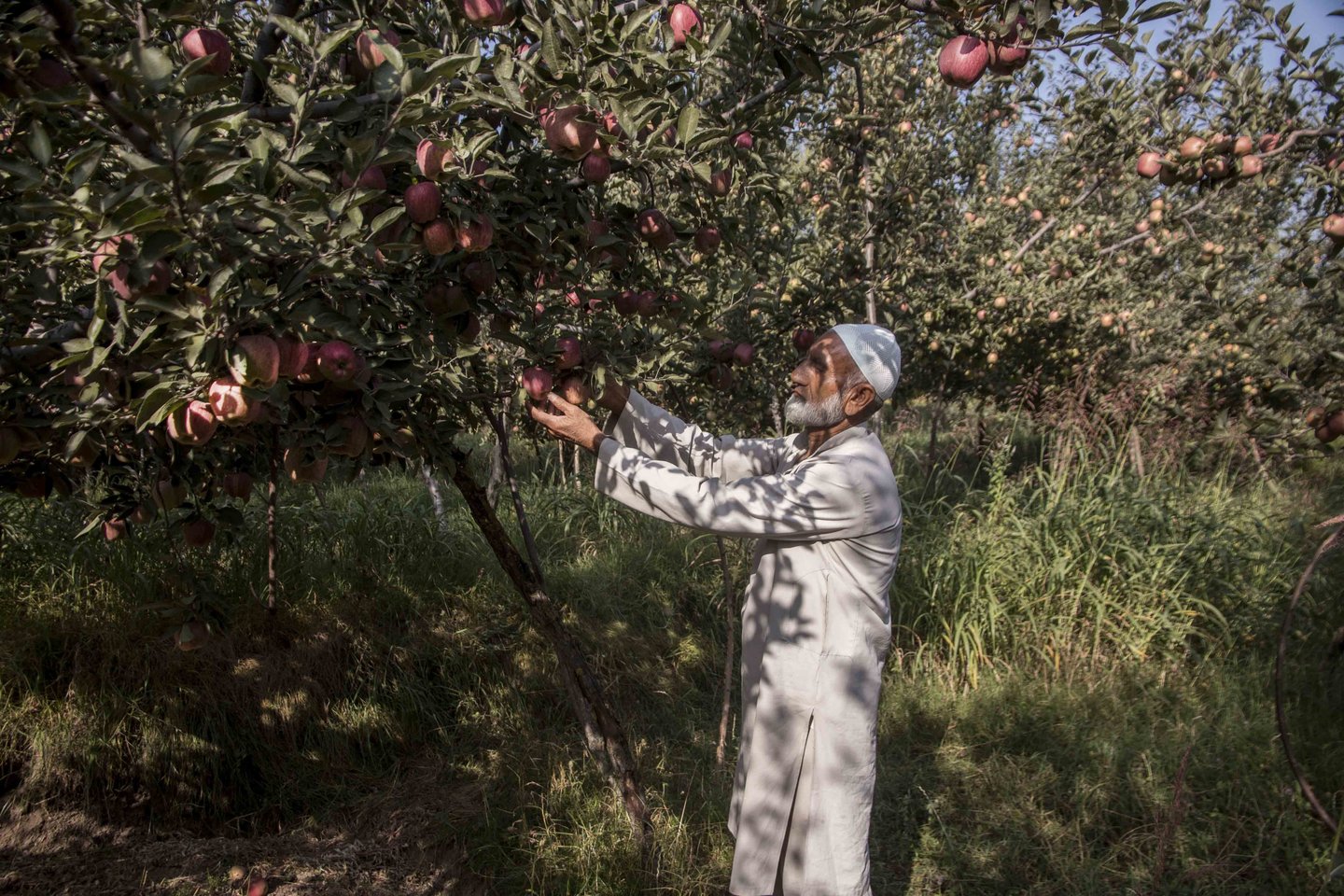 Ghulam Mohi-ud-din Mir, an orchard owner in Budgam’s Kremshora village, is facing the prospect of earning barely half his annual income from apples this year. The horticulture industry of the state is valued at Rs. 8,000-10,000 crores and provides a livelihood to lakhs of people within and outside Kashmir 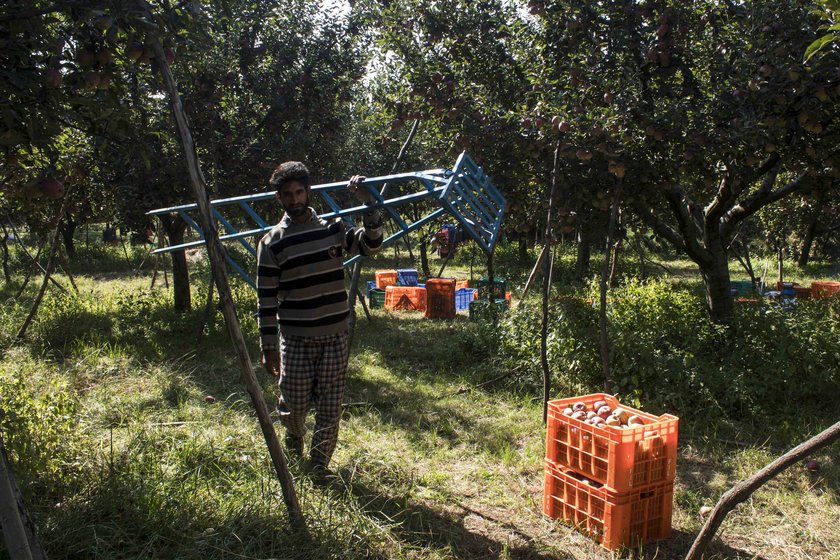 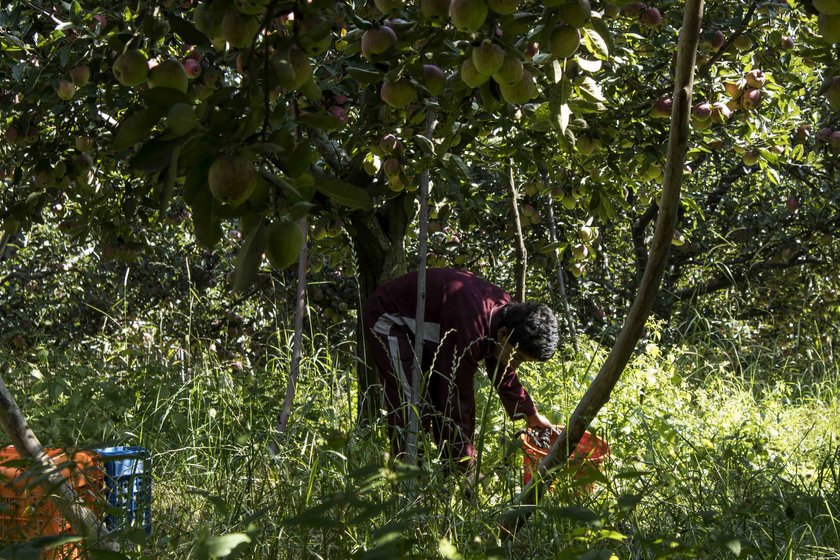 In central Kashmir, in Munipapy village of Budgam district, which I visited in mid-October, residents estimate that over 200 households own apple orchards. The traders dispatch truckloads of fresh fruit, including apples and pears, from Kashmir to Delhi’s markets through the months of July to November 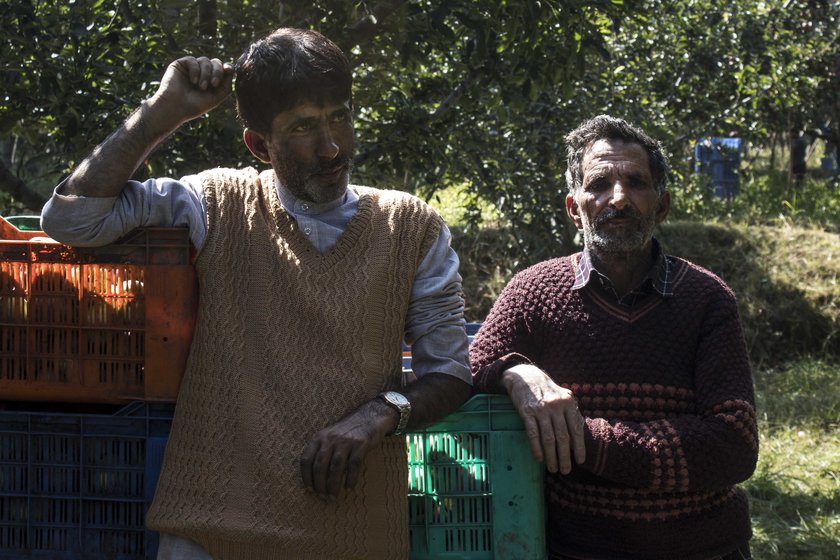 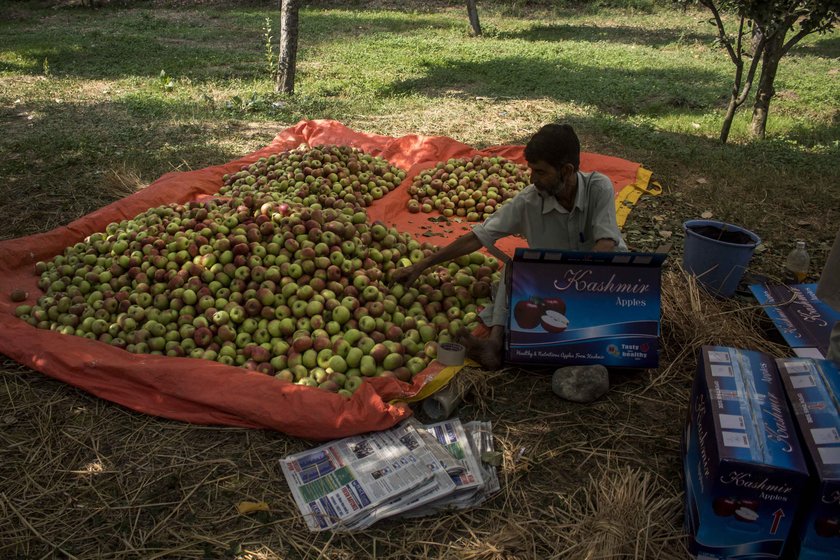 The apple business runs on informal oral agreements. In March-April, traders visit orchards to assess the flowering, and pay the orchard owner an advance based on their estimate of the produce. When the fruit is ready to be harvested, the traders return. In the current turmoil, this entire business is at risk 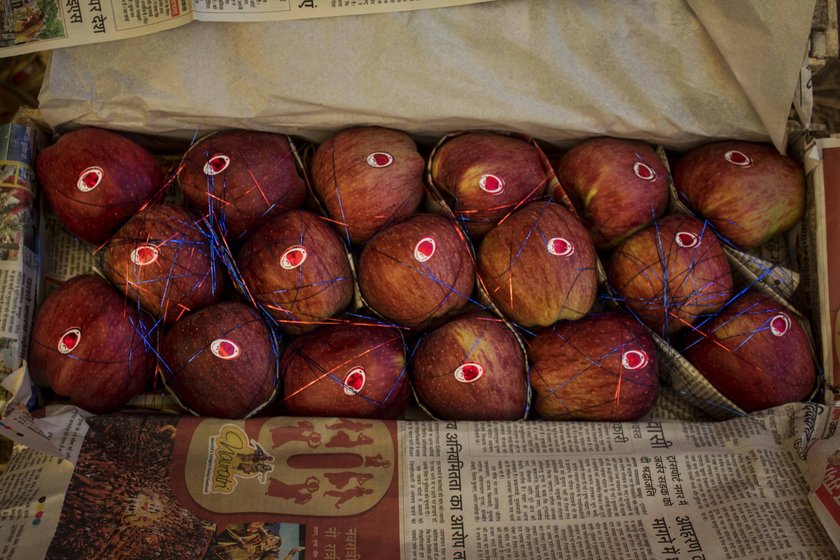 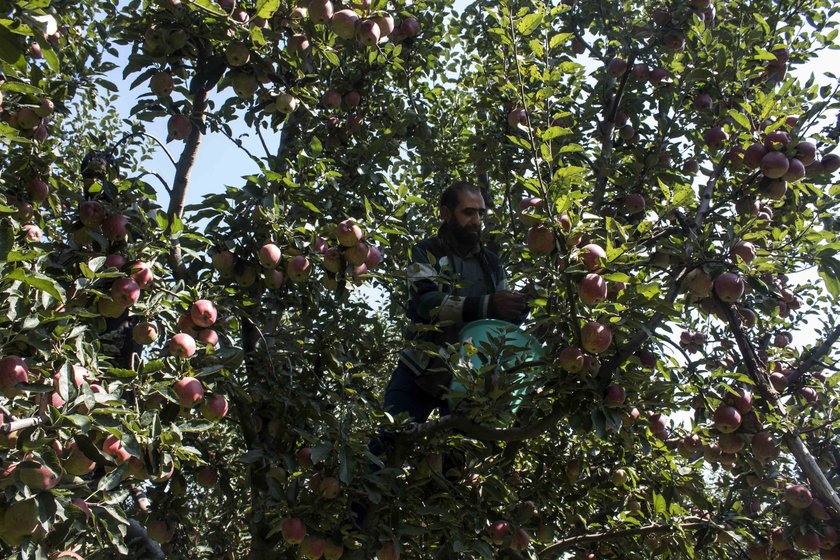 A 32-year-old trader, who asked not to be named, told me, “All my work is done on the mobile phone – calling labourers to come to the orchard, speaking with people at the sorting and packing centres, speaking to my trader contacts in Delhi, speaking to the truck drivers and transporters after dispatching the produce. When the government blocked phone networks, our day to day work was severely hit” 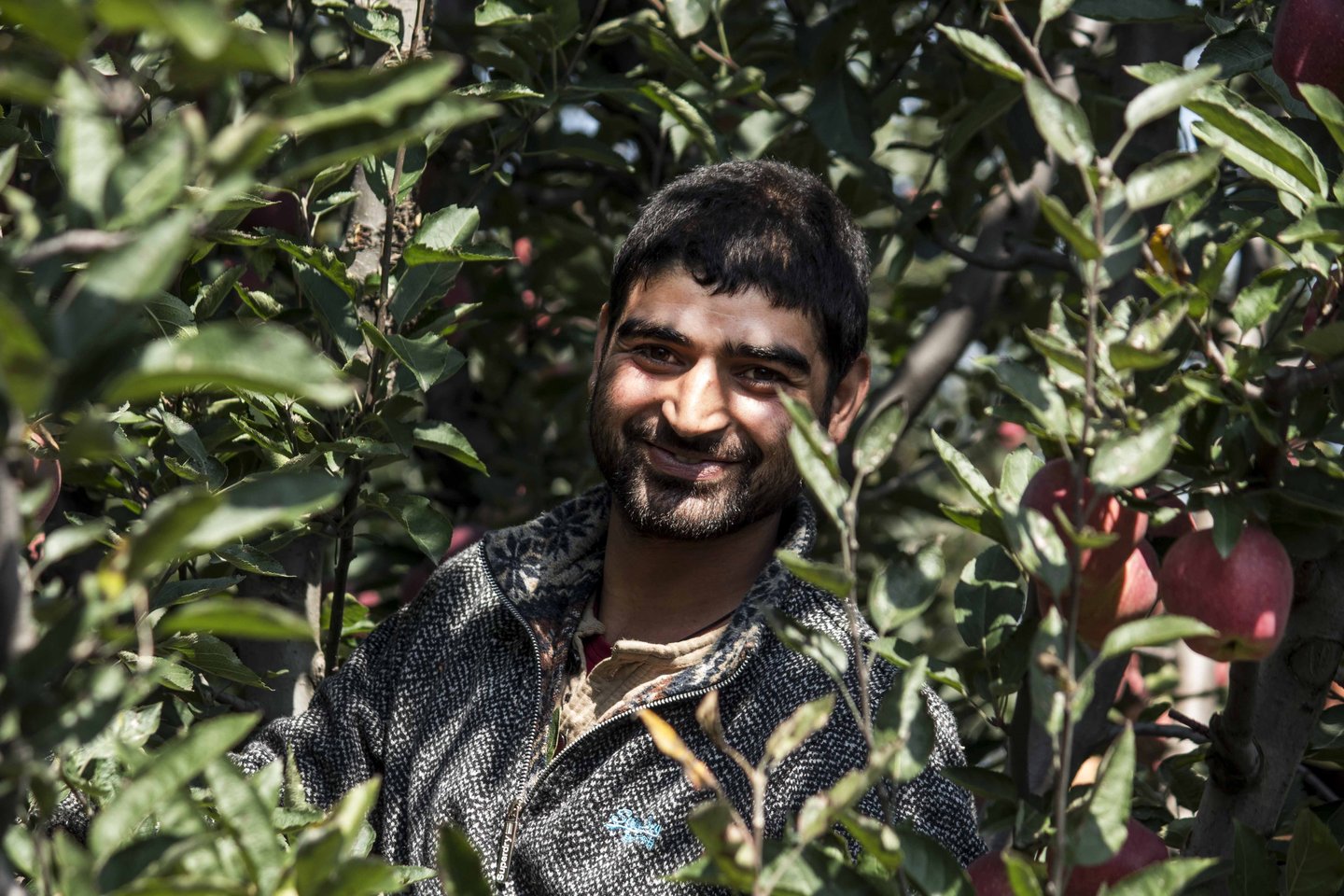 Tahir Ahmed Baba, a labourer, says he has travelled to other cities of India  for temporary work in previous years, but now feels unsafe to go outside Kashmir 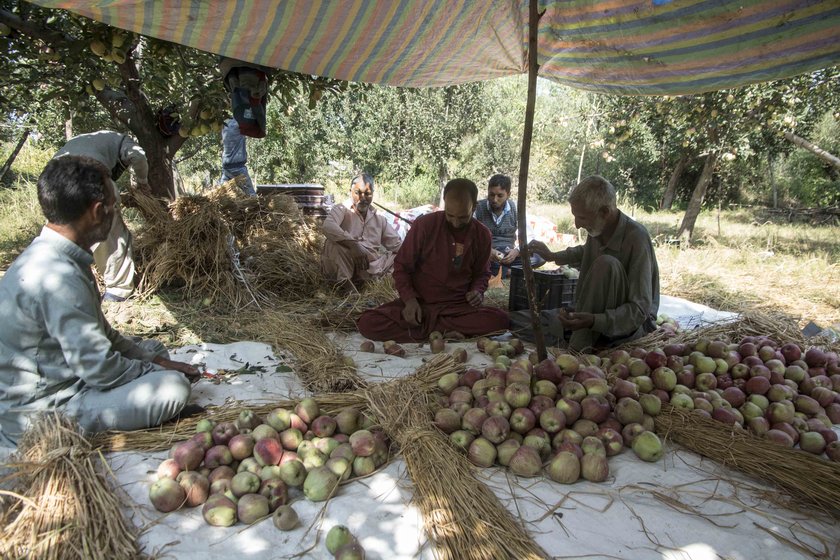 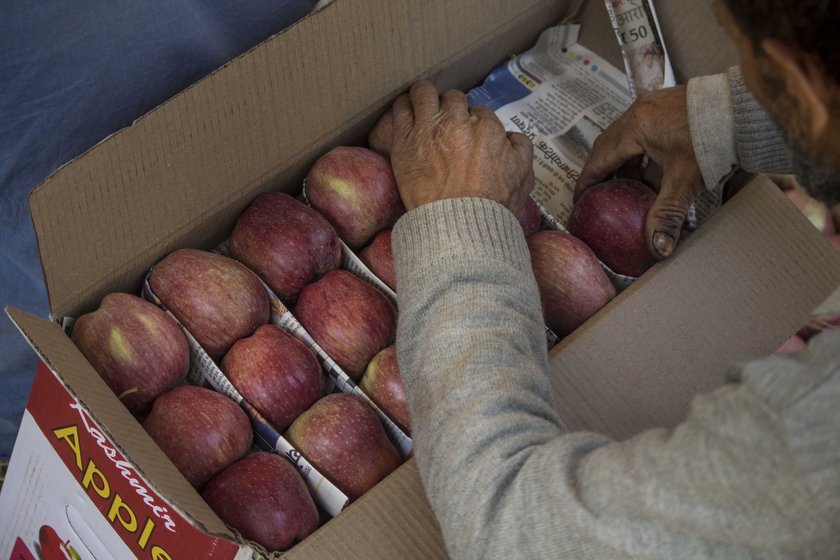 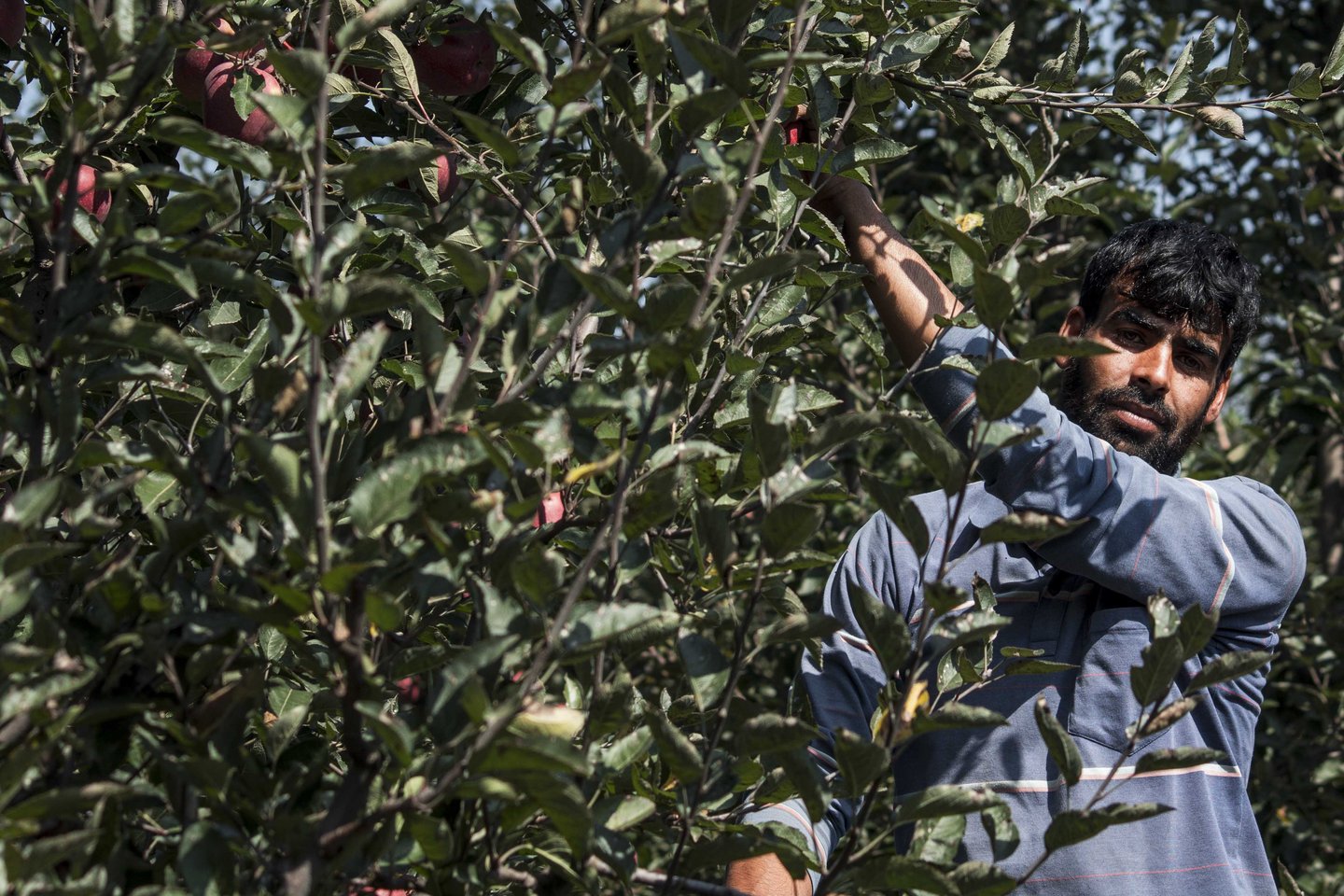 Abdul Rashid, a bus driver at a private school in Budgam, has not received his salary since August, when schools shut down. “How do working class people like me survive? he asks. "That is why we came here, to try to earn something” 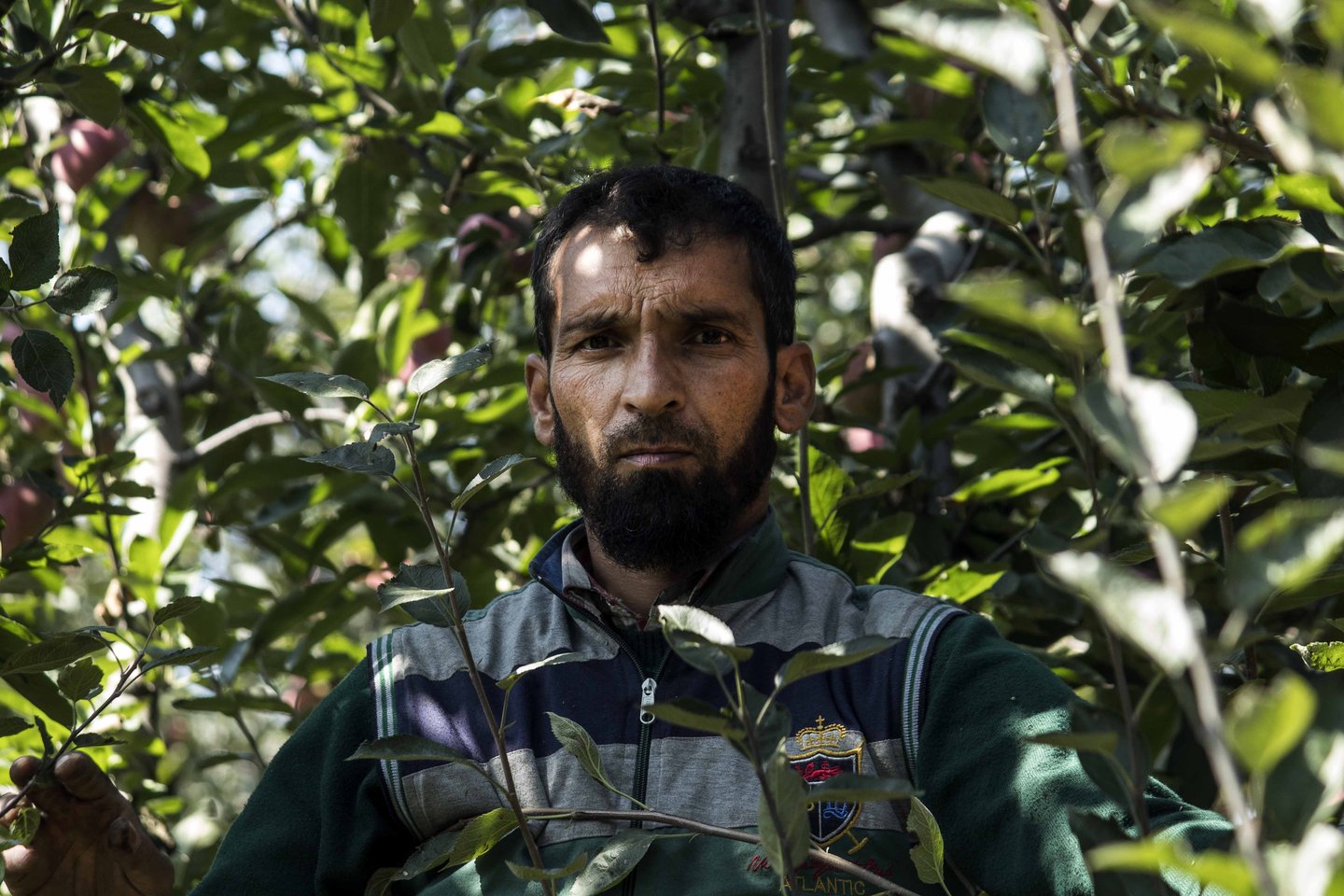 Bashir Ahmed, a driver at another school in Huroo village of Budgam, has also not been paid his salary since August. So he too came to the orchard in the hope of making some money. “This is not a job I am trained to do – we see it as begging," he says. "We find it risky to climb these trees, but we are doing it since we have no choice in this situation” 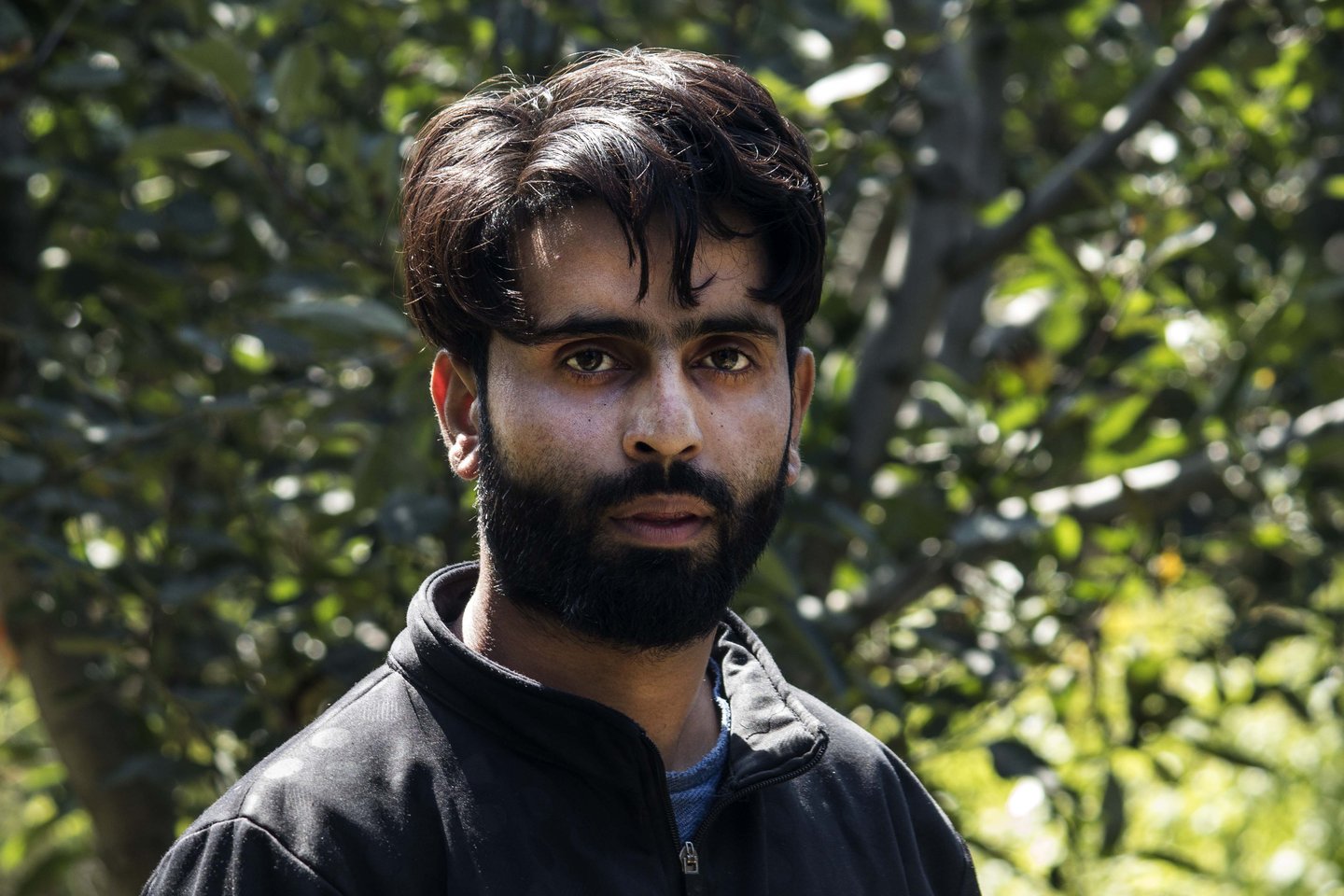 Basit Ahmed Bhat graduated in Zoology in June from a college in Dehradun, and says he cannot look for – or find – a job amid the uncertainty. He returned to his father’s orchard and was helping labourers pick apples when I met him 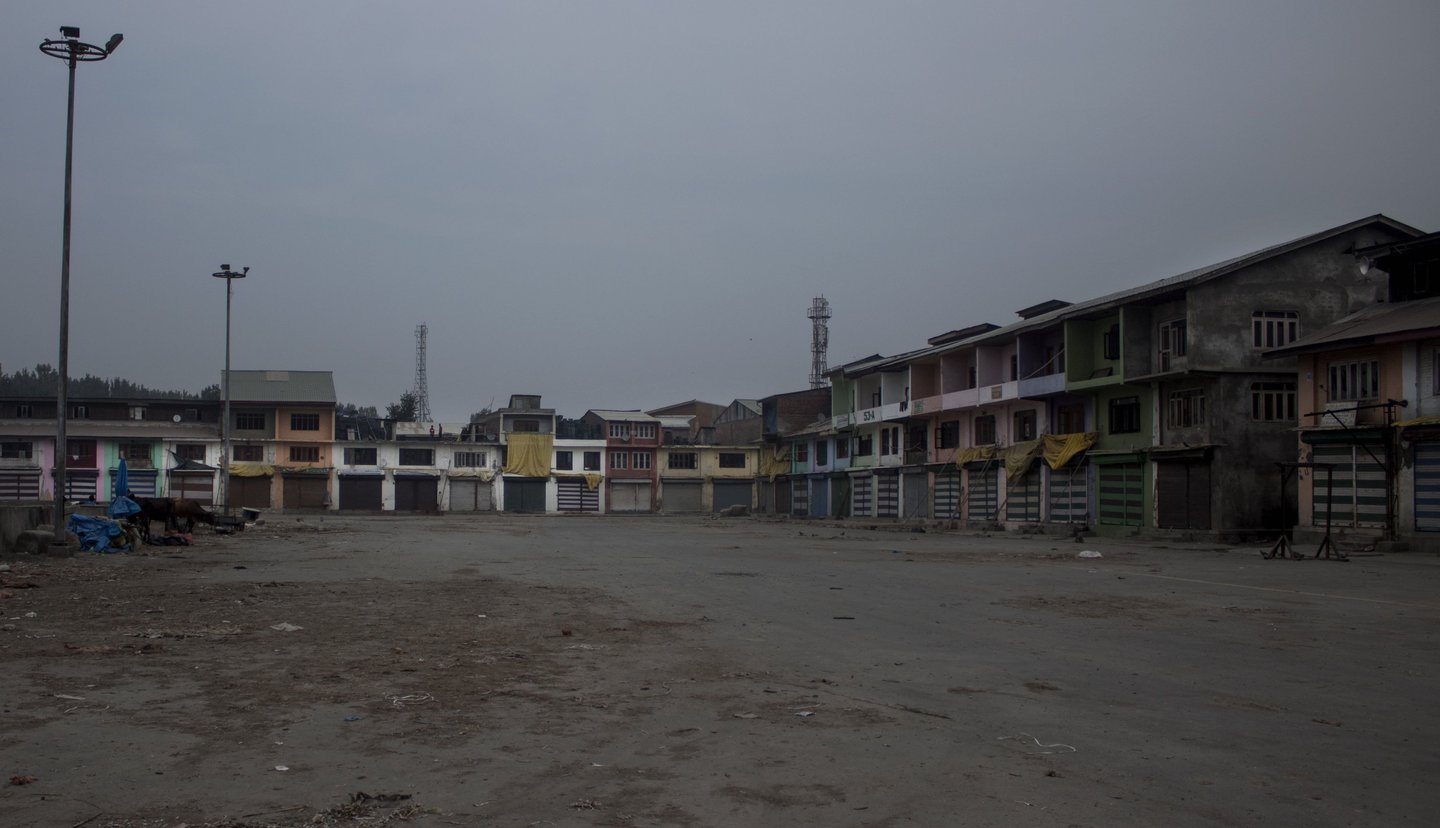 Several Kashmiri traders told me that the traders in Delhi’s market are forcing them to sell the produce at very low prices, inflicting huge losses. While authorities claim that they are purchasing produce through official schemes, all mandis , including this one on the outskirts of Srinagar, remain closed. This is due to protests ( hadtaal or ‘civil curfew’) as well as fear of attacks from militants or unknown gunmen if produce is taken to the mandi – a site identified with the government