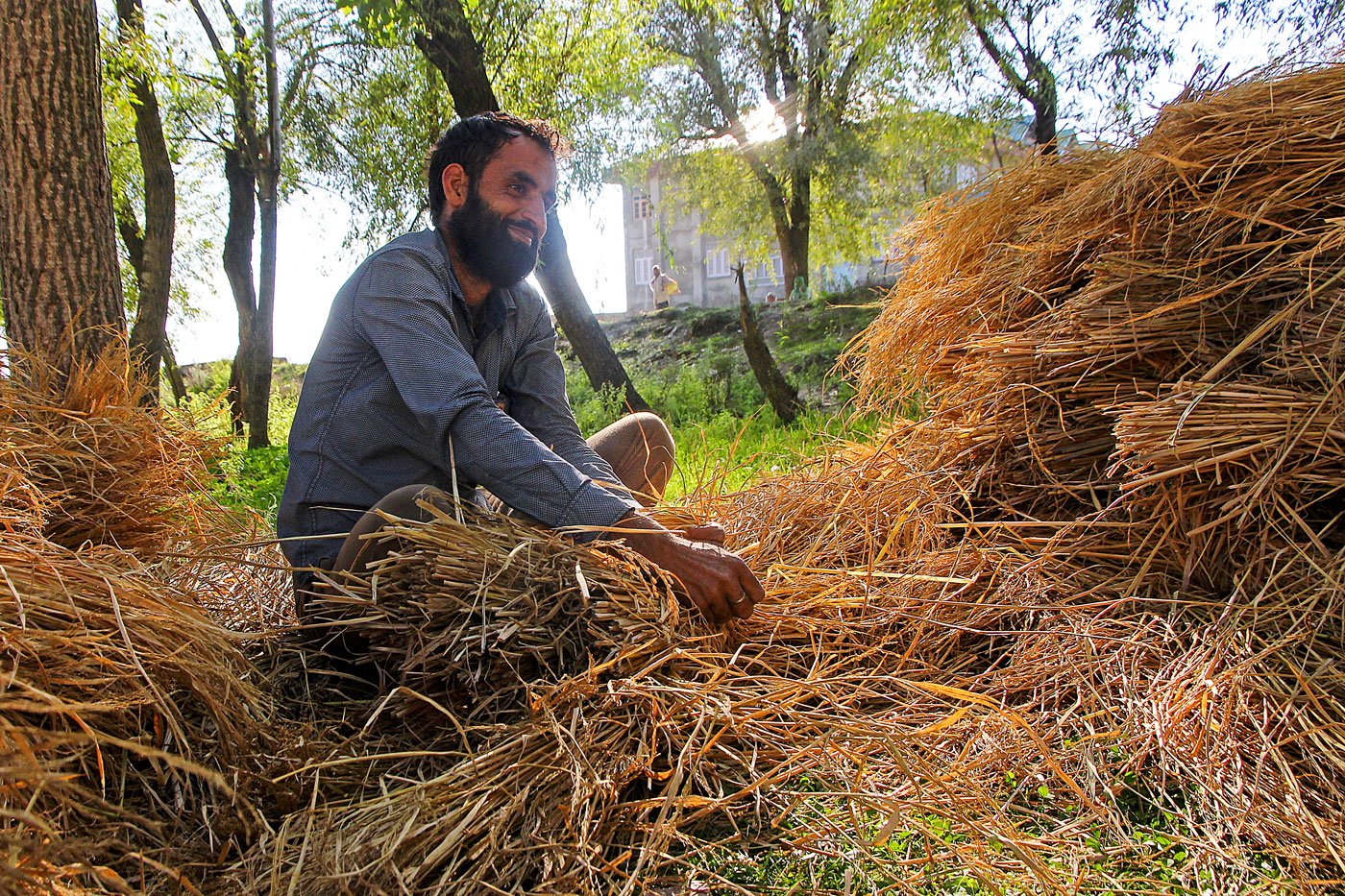 In Kashmir, no migrants to reap rice harvest

It's been a tough paddy harvest in Central Kashmir. Skilled migrant workers, who charge less than local labourers, were driven out by the lockdowns, and farmers here are thinking of giving up on the crop

“This might be the last season for cultivating paddy in my fields if Covid-19 does not go away,” said Abdul Rehman, drinking water which Haleema, his wife, had poured for him in a steel tumbler after a tiring day in the family’s field in Nagbal village of Ganderbal district in Central Kashmir.

He was working in the family’s small field – less than an acre – after 10 years. “I stopped working here myself because migrant labourers [mainly from Bihar and Uttar Pradesh] would do more work in less time, which saves me money,” he said. “But now, if ‘outside’ labourers don’t come,” added 62-year-old Rehman, a former government employee, “I might have to give up paddy farming.”

“I am in our field during the harvesting season after some 15 years. We have even forgotten how to harvest paddy,” said 60-year-old Haleema. During the harvest last month, she was bringing food from their house two kilometres away for her husband and son, 29-year-old Ali Mohammad – who, at other times, find jobs as a daily wage labourer at sand extraction and construction sites.

In Central Kashmir’s paddy fields, migrant labourers are usually paid Rs. 1,000 for harvesting one kanal of paddy (8 kanals equal 1 acre), and 4-5 labourers working as a team manage to harvest 4-5 kanals in a day. Local labourers have been asking for higher rates – Rs. 800 per person as daily wages, and four labourers usually harvest 1 kanal a day (rarely 1.5 or 2). That’s a total of Rs. 3,200 per kanal .

The lockdown since March – which came soon after months of shutdown with the abrogation of Article 370 on August 5, 2019, when all non-locals were told to leave Kashmir within 24 hours – has meant hardly any migrant labourers are available for farm work. A few remain and they worked the fields during the paddy sowing season in April-May – but the more strenuous work, say farmers here, is during the harvesting season in August-September.

Around two kilometres from Nagbal, in Darend village, Ishtiaq Ahmad Rather, who owns seven kanals of land and also works as a daily wage labourer, explained, “For one kanal this harvest season a team of four local laborers is charging Rs. 3,200. We cannot afford this. And right now, we can only find daily wage workers who are not experienced in paddy harvesting. But we are helpless, we have to harvest the crop to keep our land ready for next year’s sowing. For the same work, migrant labourers used to charge only Rs. 1,000.” 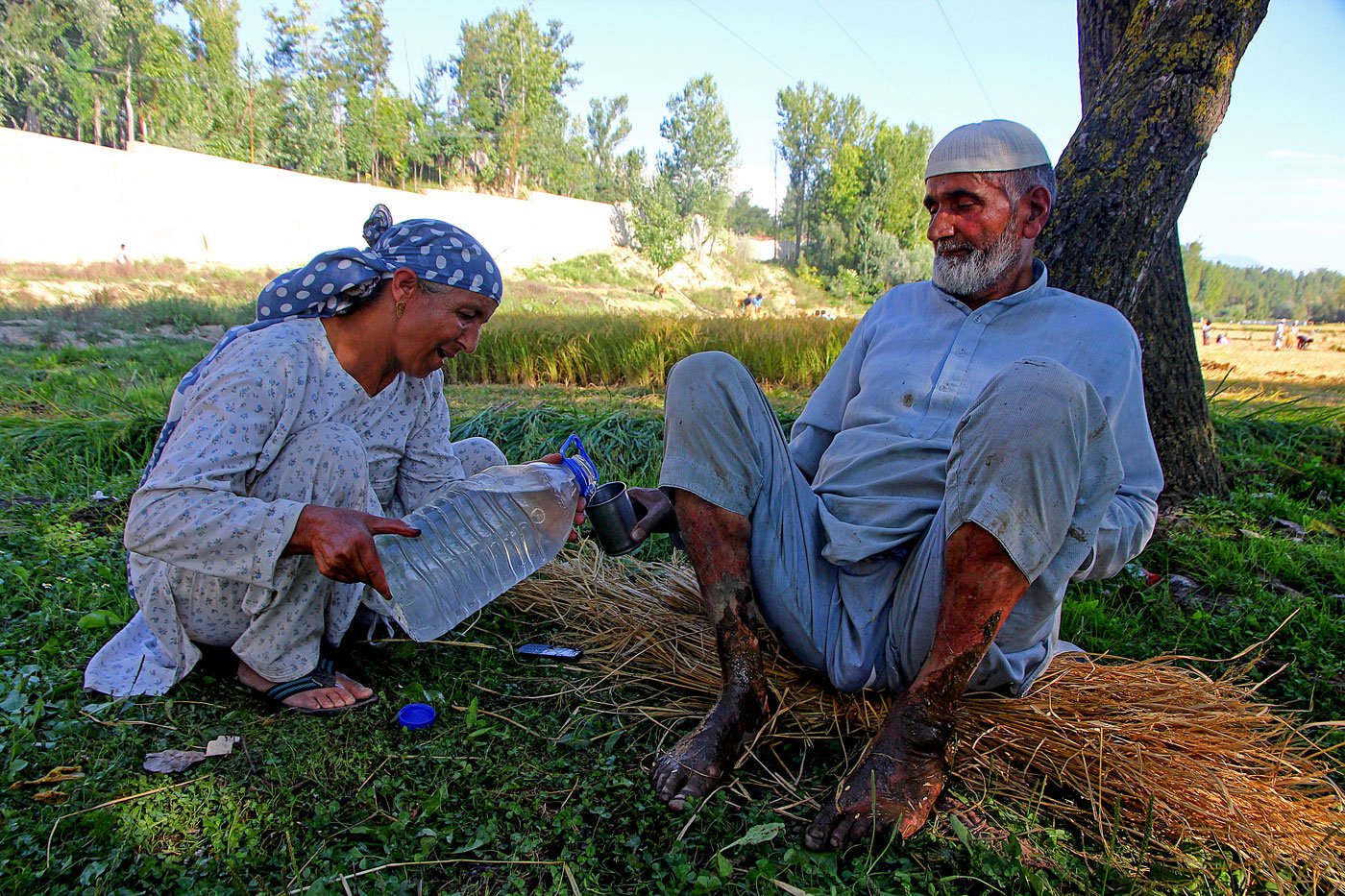 'This might be the last season for cultivating paddy in my fields if Covid-19 does not go away', said Abdul Rehman, drinking water which Haleema, his wife, had poured for him in a steel tumbler after a tiring day in the family’s field in Nagbal village of Ganderbal district in Central Kashmir

While Ahmad Rather and some other farmers here also cultivate mustard, peas and a few other crops during the rabi season, for the farm families of Ganderbal who own small patches of land, paddy is the mainstay, especially three main varieties – Shalimar-3, Shalimar-4 and Shalimar-5, says Syed Altaf Aijaz Andrabi, Director Agriculture.

In Kashmir, paddy is cultivated on 1.41 lakh hectares of land – around 28 per cent of the total land under agriculture (of 4.96 lakh hectares), shows data provided by the Director Agriculture’s office. “Paddy is the main [food] crop here, and its sweet taste cannot be found anywhere outside Kashmir,” says Andrabi. The paddy yield in water-rich Kashmir Valley, he adds, is roughly 67 quintals per hectare. The crop provides wage employment to many, and most of the farm families here use the rice they harvest for their own consumption, especially during the harsh winter months.

But this year, farmers like Rahman and Rather, who own small pieces of land, are facing losses at two levels. Due to the lockdown, they or their family members have lost months of earnings from daily wage labour – for which the usual rate here is Rs. 600 a day – at brick kilns, sand extraction pitches and construction sites. And during the recent harvesting weeks, they were left with no option but to hire local labourers at rates they could barely afford.

Among those struggling is 38-year-old Riyaz Ahmad Mir, from Karipora village in Budgam district of Central Kashmir. He lost his sand digging job due to the lockdown and was counting on his 12 kanals for a good yield. “I had set my hopes on my land, but untimely rains [in early September] damaged most of my crop,” he told me some weeks ago. “I wish the migrant labourers had been here so that I could have saved some of my paddy with their fast harvesting skills.”

And in Darend village, 55-year-old Abdul Hamid Parra, working on his four kanal field, echoes the hope:  “This is the first time that migrant labourers are missing from Kashmir’s paddy fields.” (They were available last year, even if in depleted numbers.) “We have worked in curfews, lockdowns, hartals , but this Covid time is different. I hope we will see the migrant labourers back in our paddy fields in future.”

These hopes might well be realised. Over the last two weeks, labourers from other states have begun trickling into the Valley. 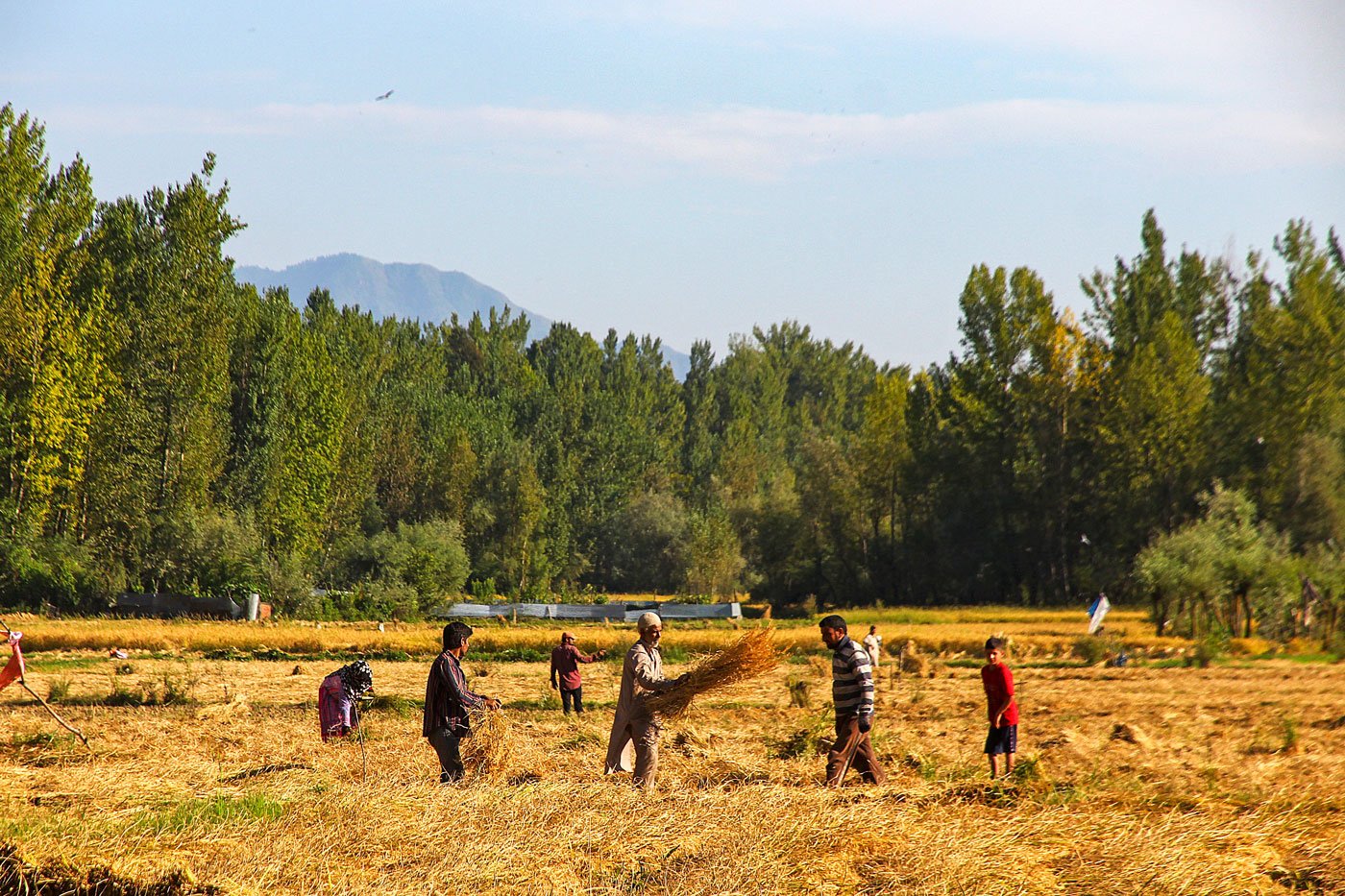 With a shortage of skilled labourers, many families in Ganderbal district of Central Kahsmir were out in their fields after years during the harvest 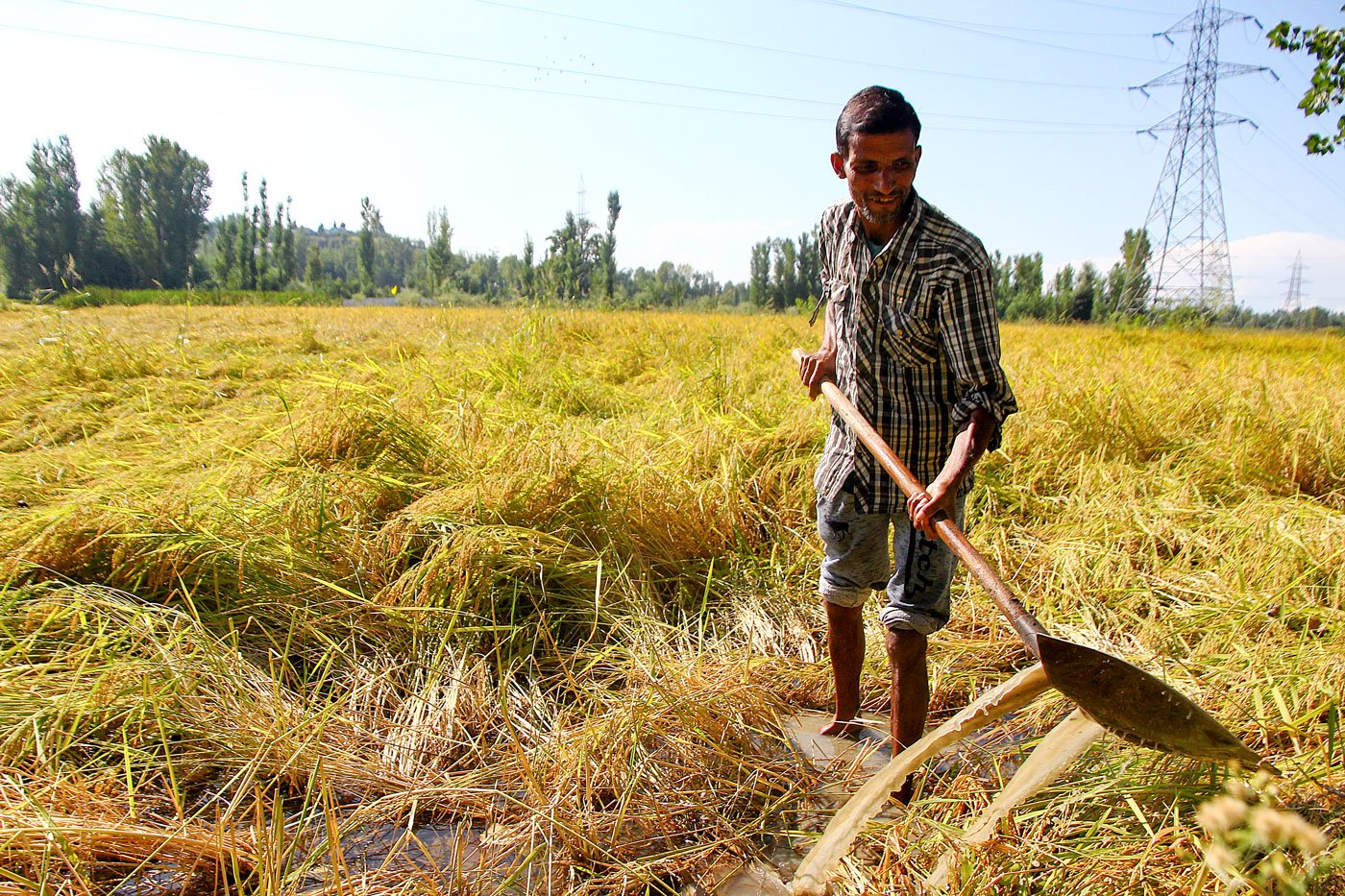 Riyaz Ahmad Mir of Karipora village in Budgam district, removing excess rain water from his paddy field. He lost his sand digging job due to the lockdown and was counting on his 12 kanals for a good yield. 'But untimely rains damaged most of my crop', he told me. 'I wish the migrant labourers had been here so that I could have saved some of my paddy...' 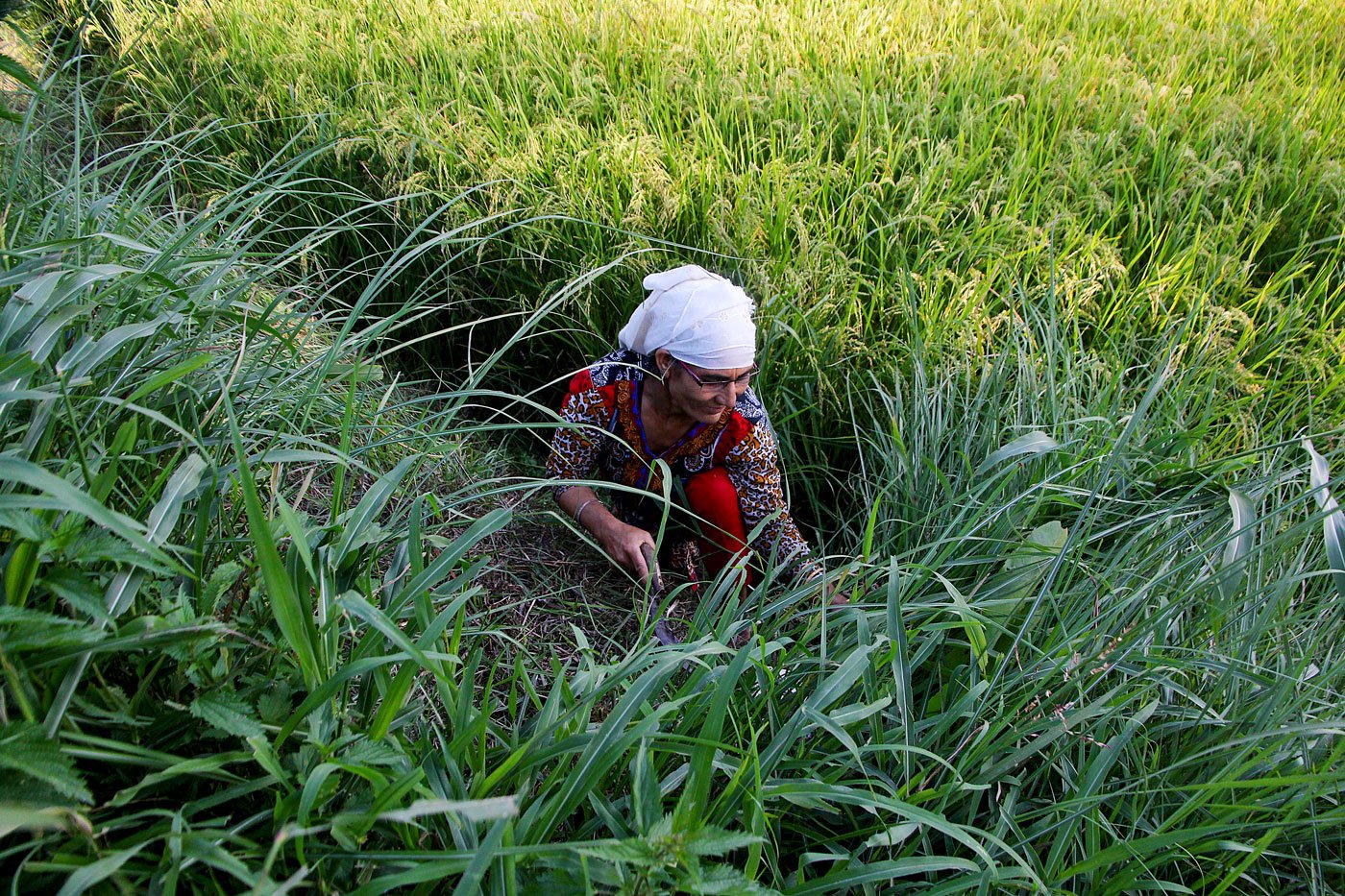 Rafiqa Bano, 60, from the Gudsathoo area of Budgam district, plucking the weeds from her family's 12- kanal paddy field, and trying to keep the plants healthy 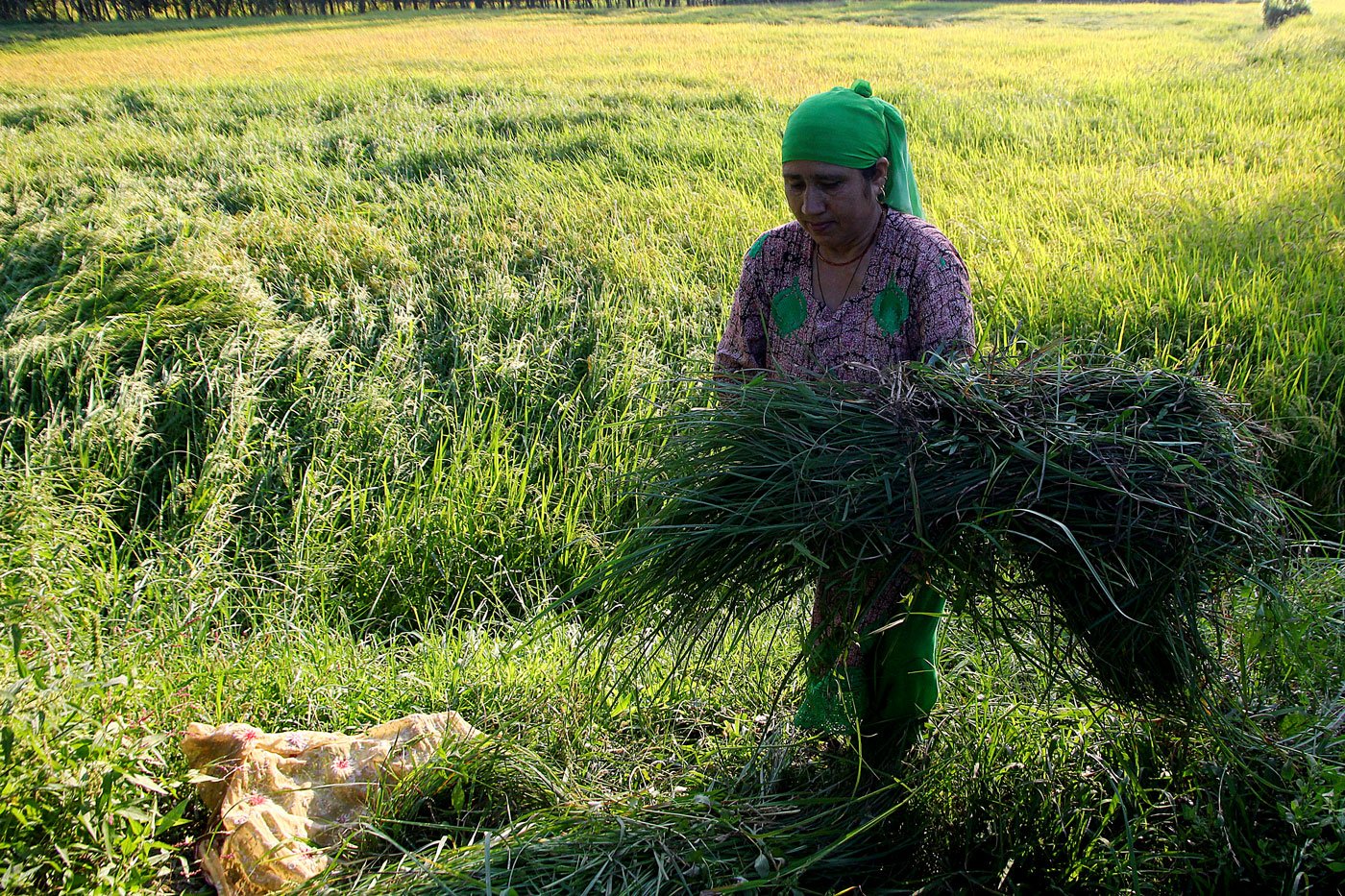 Another farmer (her name is also Rafiqa), 62 years old, from the Gudsathoo area of Budgam district, plucking and assembling the weed grass to take it for the cattle 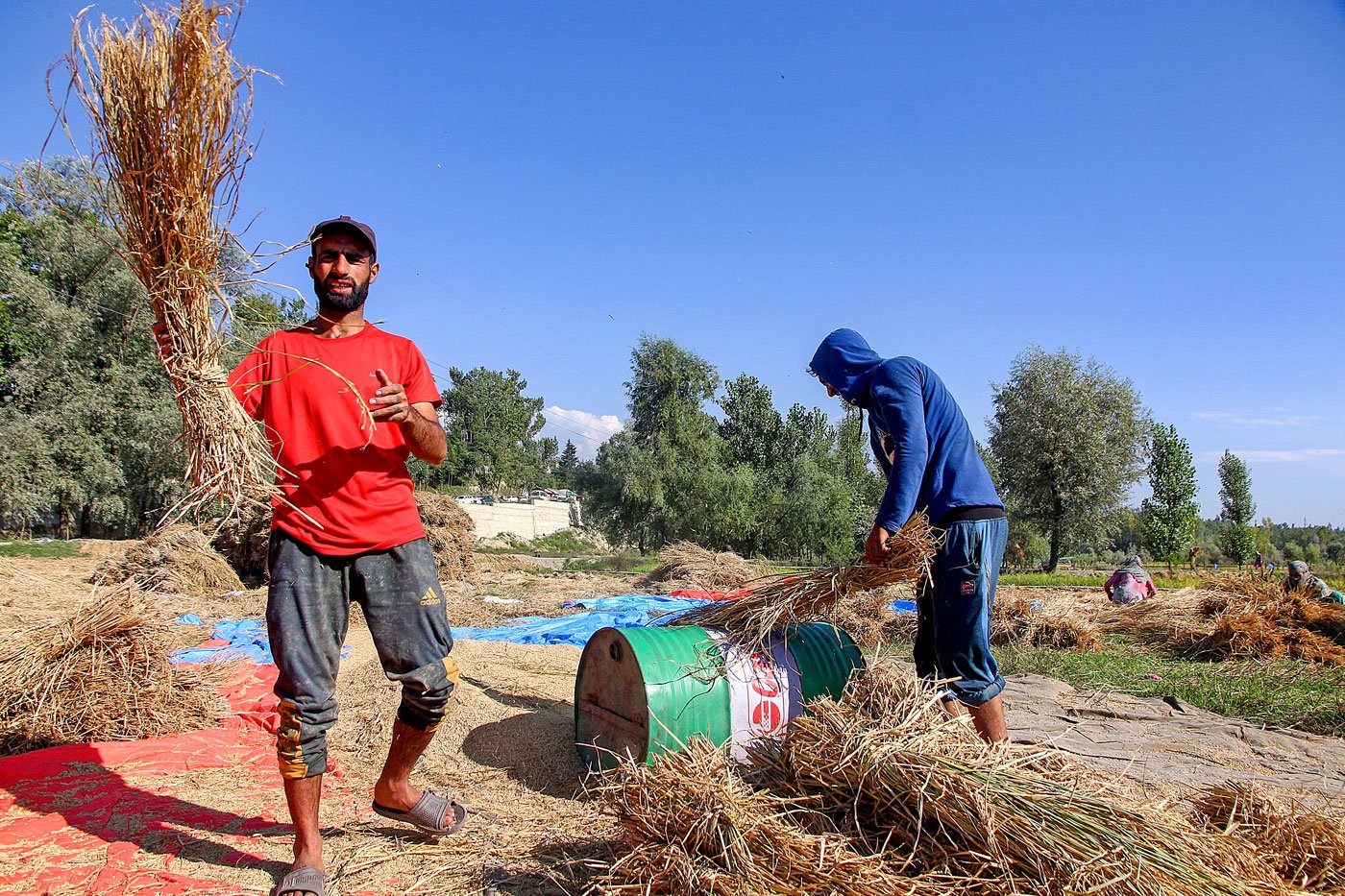 Ishtiaq Ahmad Rather from Darend village in Ganderbal district threshing paddy on an aluminum drum. 'I have seven kanals of land and have been in farming for 15 years', he said. 'It is very tough for us these days to work without migrant labourers, most of us had left farming on their shoulders' 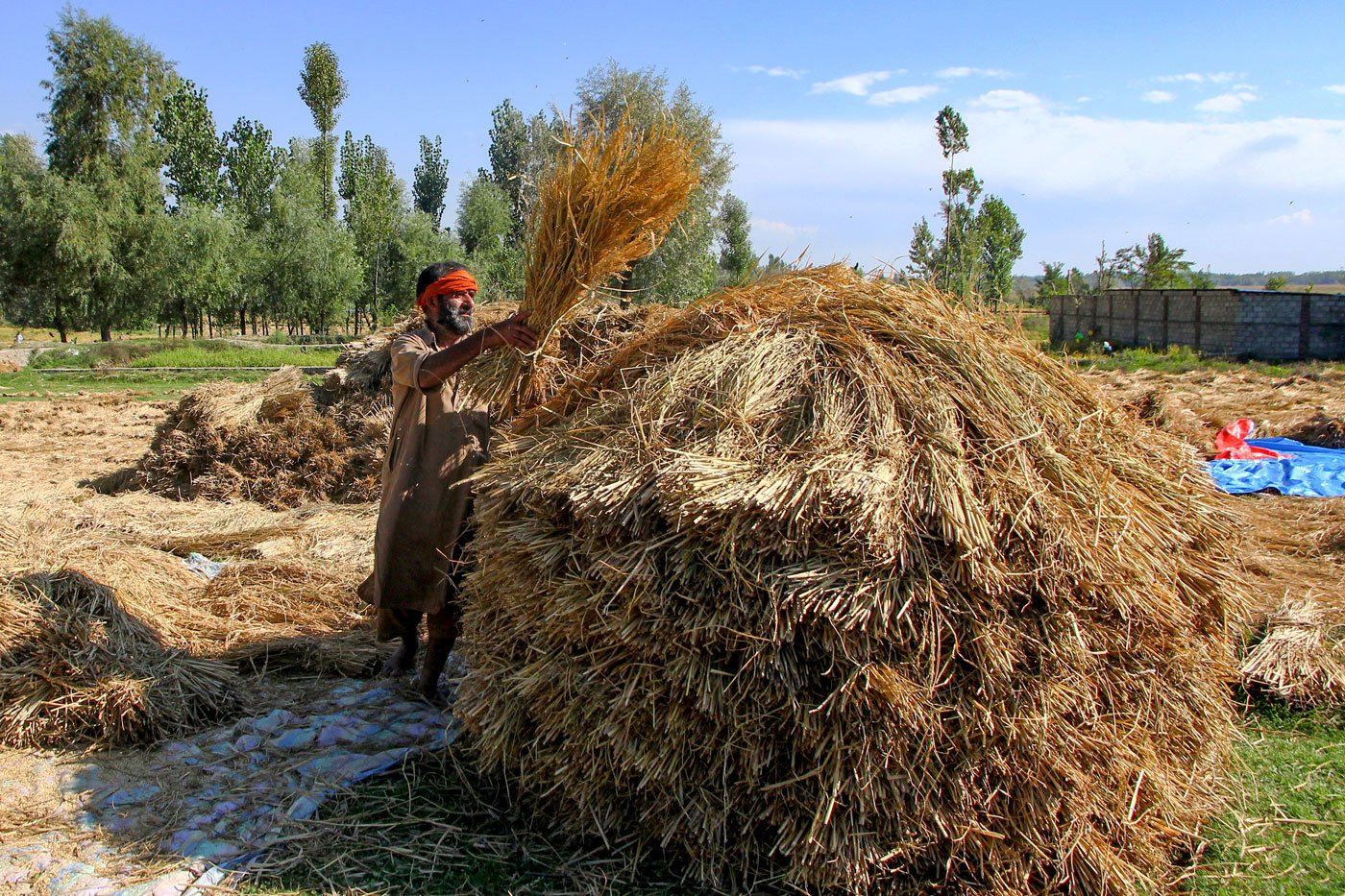 Abdul Hamid Parray, 55, from Darend village in Ganderbal district, making a pile of paddy in his four kanal field: 'This is the first time that migrant labourers are missing from Kashmir's paddy fields. We have worked in curfews, lockdowns, hartals, but this Covid time is different. I hope we will see them back in our paddy fields in future' 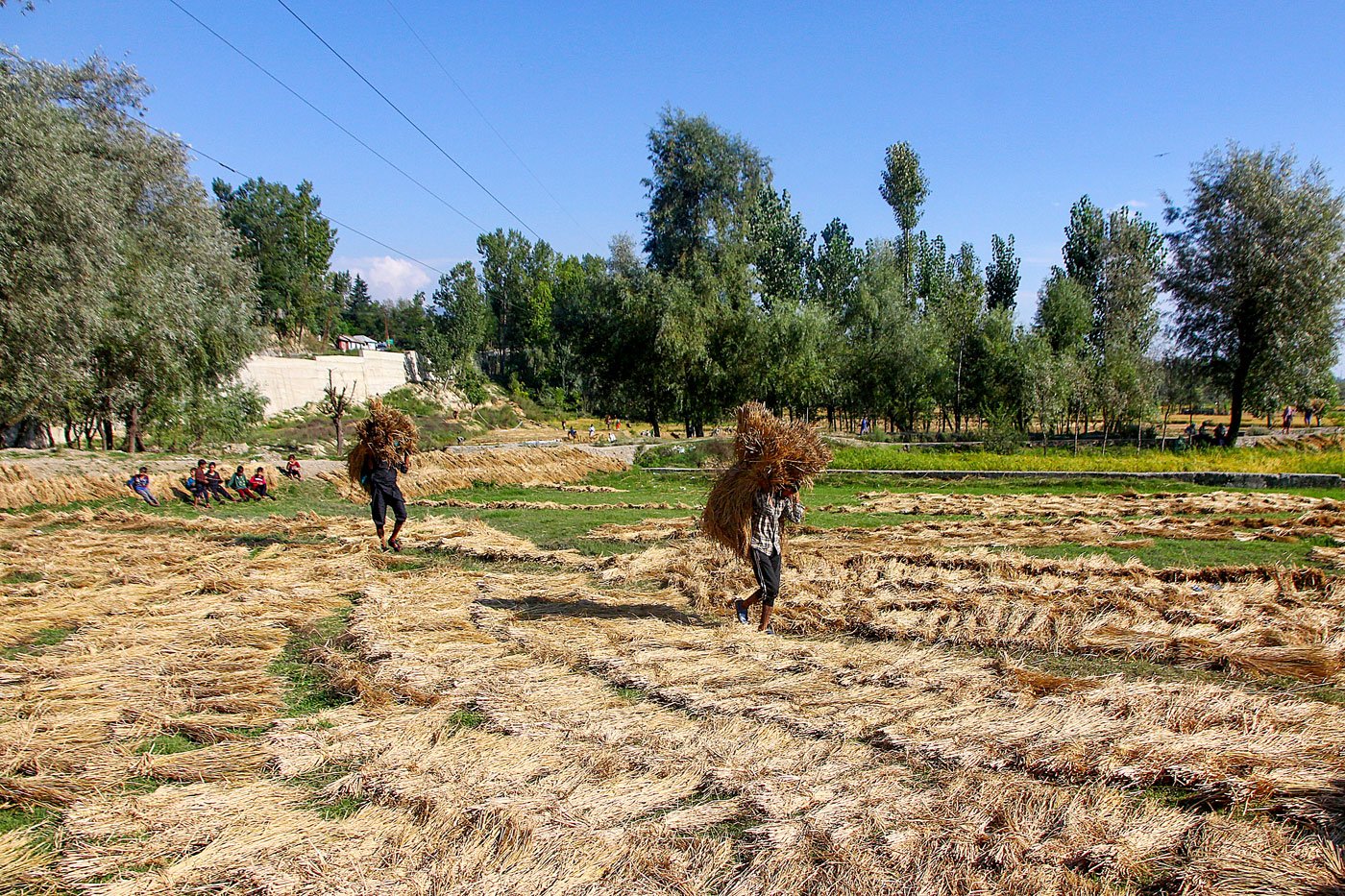 In Darend village of Ganderbal district, Kashmiri farmers carrying bundles of paddy plants to dry it in an open field 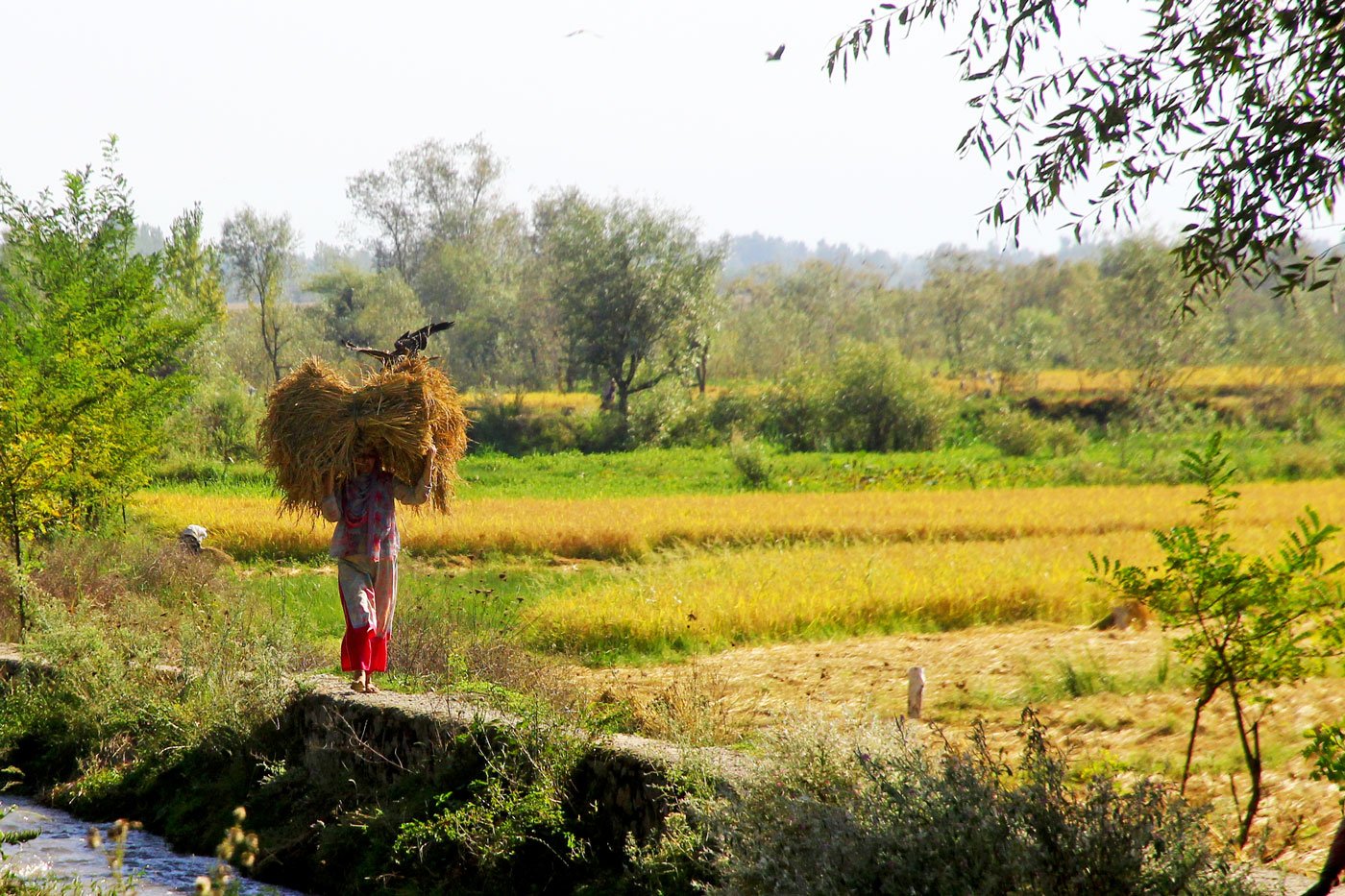 In Darend village of Ganderbal district, a young Kashmir girl (who did not want to be named) carrying paddy bundles on her head for the threshing process 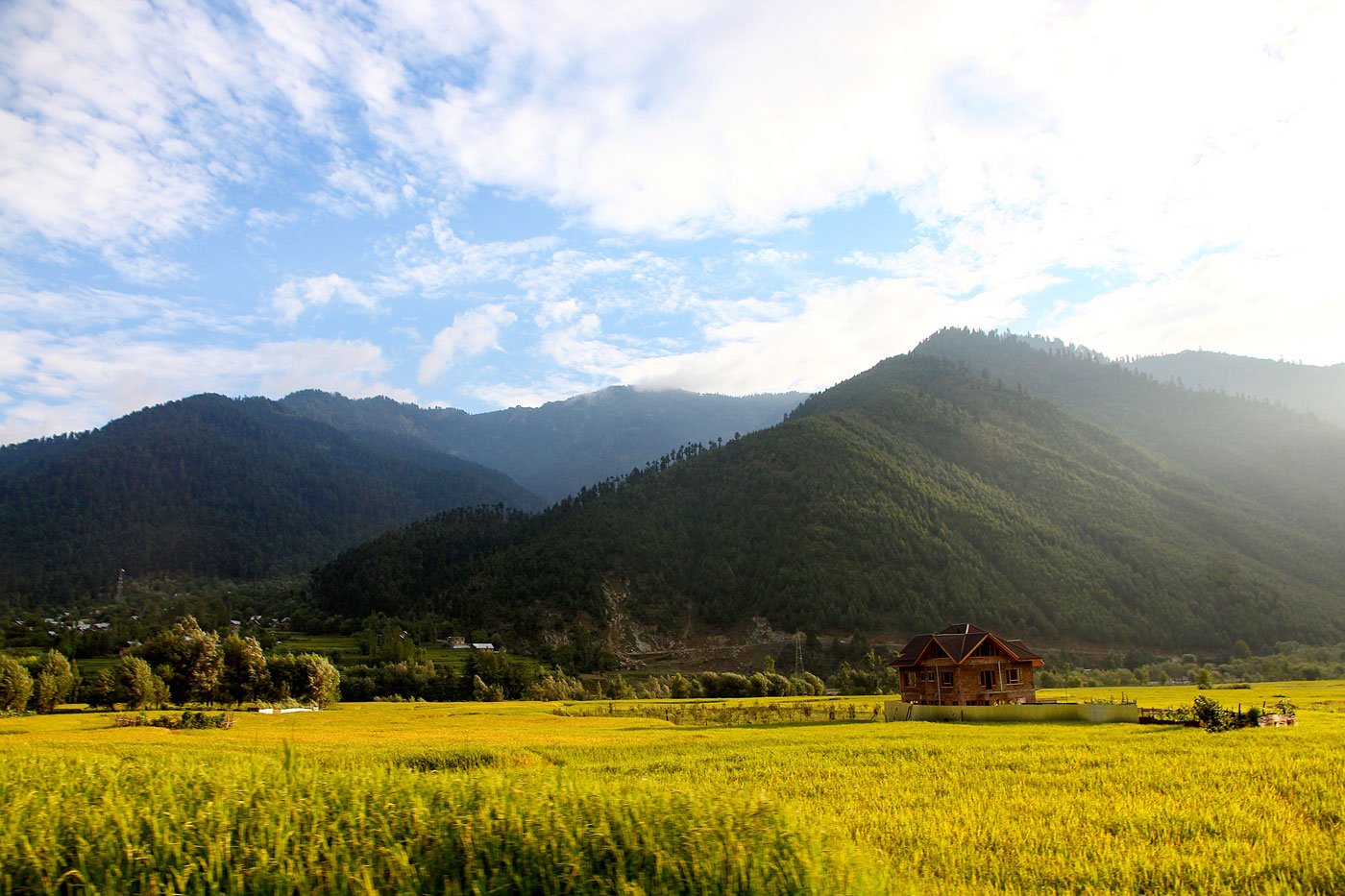