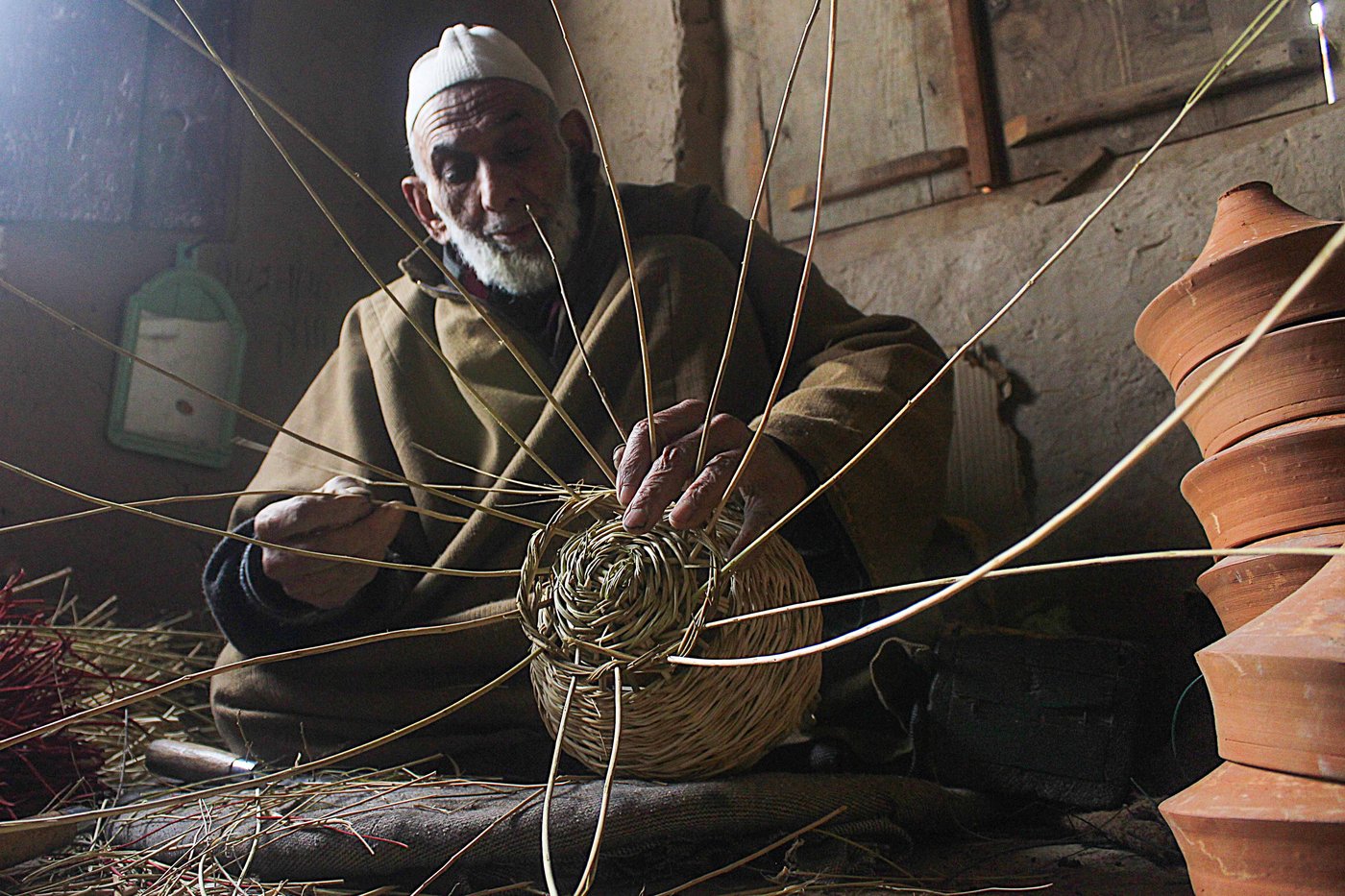 The kangri, a wicker-covered earthen 'fire-pot' filled with charcoal embers, is in high demand during the severe winters in Kashmir, and the seasonal trade sustains artisans, farmers and labourers

Abdul Majeed Wani is happy that the winter is harsh this season. He is hoping the demand for the kangris he makes will keep going up, as it did when the temperature fell to as low as -10 degrees Celsius in some parts of Kashmir in December last year.

Wani, 55, lives and works in Charar-i-Sharief in central Kashmir’s Budgam district. The town, around 32 kilometres from Srinagar, is a hub for artisans who make kangris – an earthen pot filled with charcoal embers and enclosed by a handmade wicker container. Many in Kashmir hold this portable heater by its handle inside their pherans (a traditional knee-length woolen cloak worn in winters) to try and stay warm during the long winters of Kashmir. (Some studies speak of 'kangri cancer', peculiar to Kashmir, caused by holding the embers close to the body for prolonged periods; but that is another story.)

“Our area is known for the beautiful kangris we make with fine wicker,” says Umar Hassan Dar, 30, a resident of Kanil mohalla in Charar-i-Sharief. Artisans as well as labourers here are involved in the making of kangris . Willow wood from nearby forests is collected for the wicker baskets or purchased from farmers, boiled to make it soft, scraped and peeled using a sharp handmade instrument (locally called chappun; two thick wooden sticks in a cross, dug into the ground), and then put through a process of soaking, drying and dyeing. This readied wicker is then woven around the earthen pot.

The process takes around a week, during which time the wicker must dry fully. The kangris are usually made before winter begins in August, and sometimes, depending on the demand, are also made during the winter season, which trails off by the end of February.

In the past, the kangris of Kashmir were only an earthen pot – purchased from local potters – without the wicker sheath. Over time, some artisans started making this indigenous heater with various wicker designs, which cost more than the older versions. A low-cost kangri now costs around Rs. 150 and takes 3-4 hours to make; a more intricately designed multi-colour kangri – which takes 3-4 days to weave – can cost around Rs. 1,800, Dar tells me, and fetches him a profit of Rs. 1,000 to Rs. 1,200. 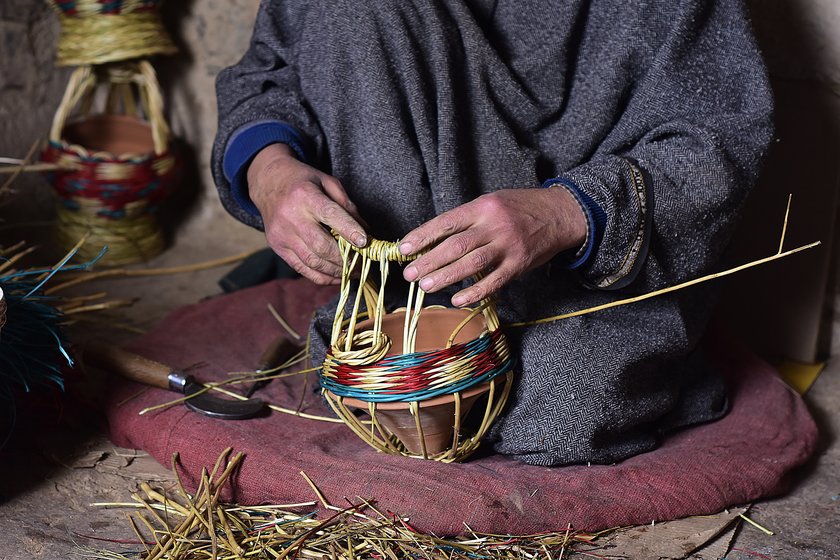 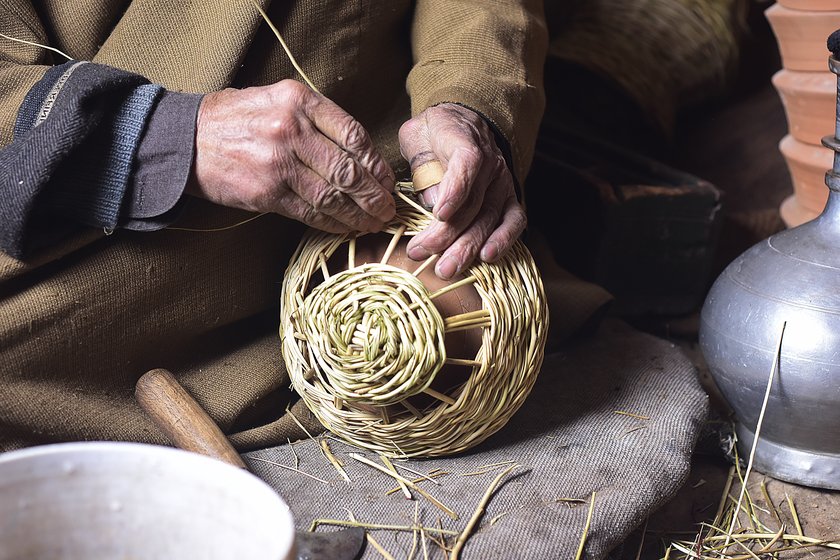 Though kangri -making is a seasonal occupation, it provides year-long sustenance to the artisans and to the farmers who sell wicker to traders and contractors. In Charar-i-Sharief, kangri -makers tell me, every winter, they sell around 50,000 to 60,000 of their fire-pots, earning a total of Rs. 1 crore. In the prevailing severe winter season, the sales are likely to go up. “We are hopeful of crossing 1 crore rupees worth of business this season as the demand for kangris is only on the increase,” says Wani, who earns Rs. 12,000-15,000 a month during the six-month season from June to December.

While men work on all the other processes in kangri -making, it’s women who usually peel the wicker. “I started peeling when I was in Class 12,” says Nighat Aziz ( name changed on her request ), now a graduate. “It needs a lot of skill to peel a single branch of wicker perfectly, otherwise you could break the wicker and it will go waste. Like Nighat, many young women in the Umerhere area in Ganderbal district work as wicker-peelers. They usually earn Rs. 40 to peel a bundle of wicker, and can peel 7-8 bundles a day over 3 to 4 hours.

But some of the women say they want to stop doing this work. “People in our village look down upon us for being wicker peelers, they feel it is a poor family’s job. I don’t want to continue doing this because of their taunts,” says Parveena Akhter of Umerhere.

It’s also usually the women who prepare the embers for the fire-pots for their family. The charcoal is bought from the market – it comes from burnt firewood, mostly of apricot and apple trees. “In the morning and after the sun sets, I prepare the pots. Women across Kashmir perform this task during winters,” says 50-year-old Haja Begum, who lives in the Ali Kadal area in downtown Srinagar. She prepares around 10 kangris for her joint family every day, including for her husband, a vegetable vendor.

Though other forms of heating have taken over – from central heating to the latest bukharis (wood stoves) from Central Asia – the kangri remains the common person’s heater in the sub-zero temperatures of Kashmir, especially in rural areas. Within their robes, the charcoal embers provide comforting heat for hours during the long winters. 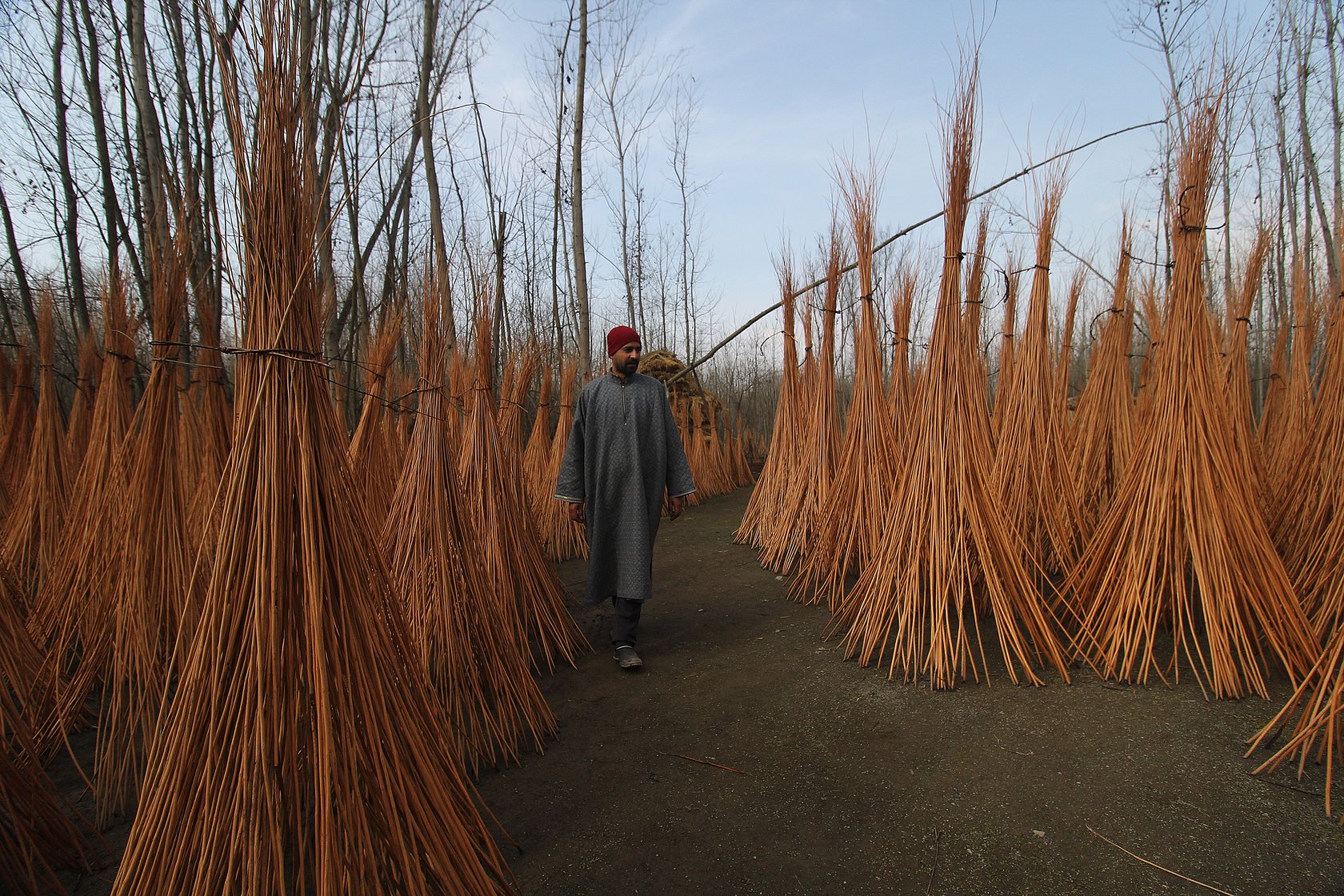 Farooq Ahmad Wani, 32, a resident of the Umerhere area in Ganderbal district of central Kashmir, works as a contractor; he purchases raw wicker from farmers and processes it into the final product for sale to kangri makers 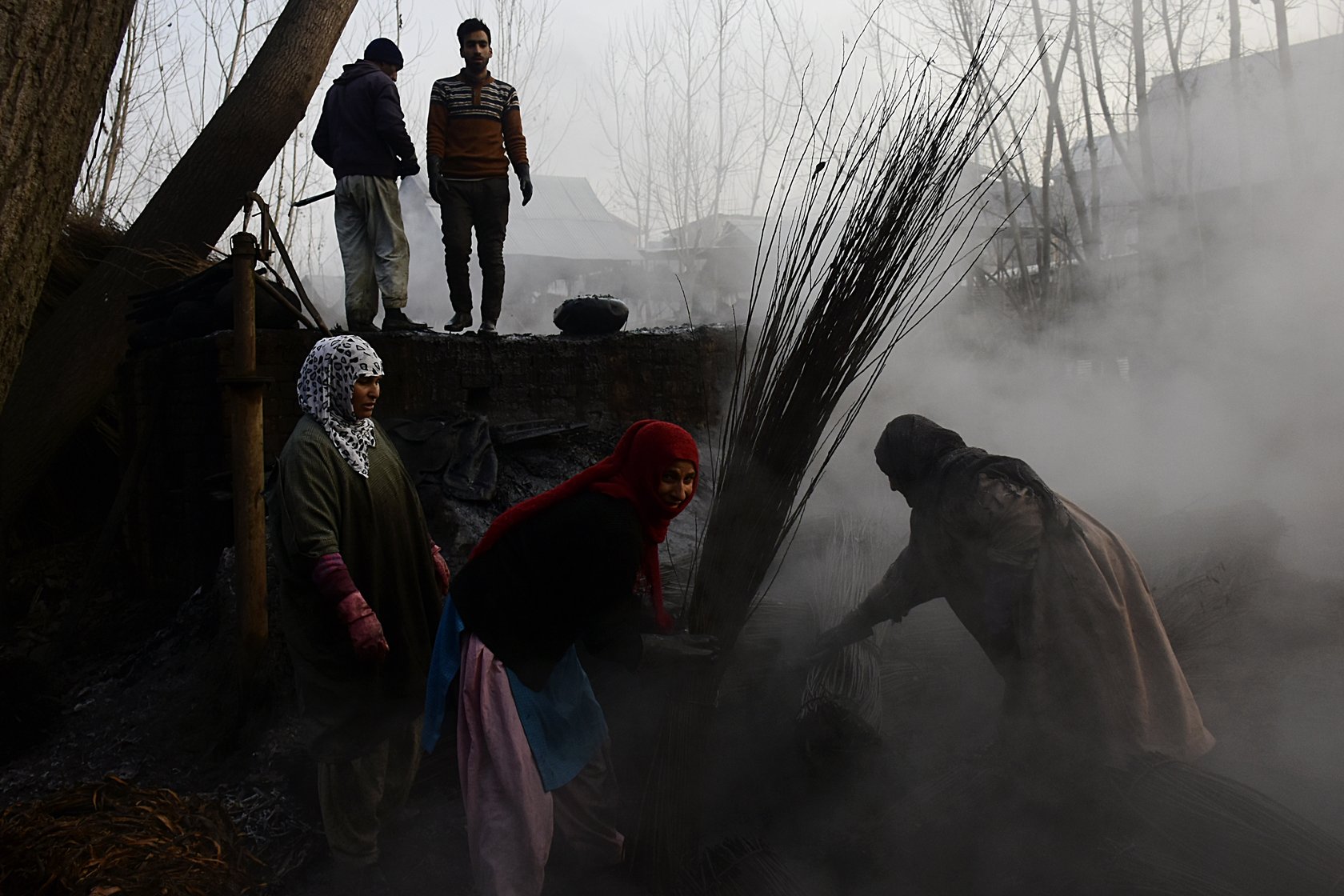 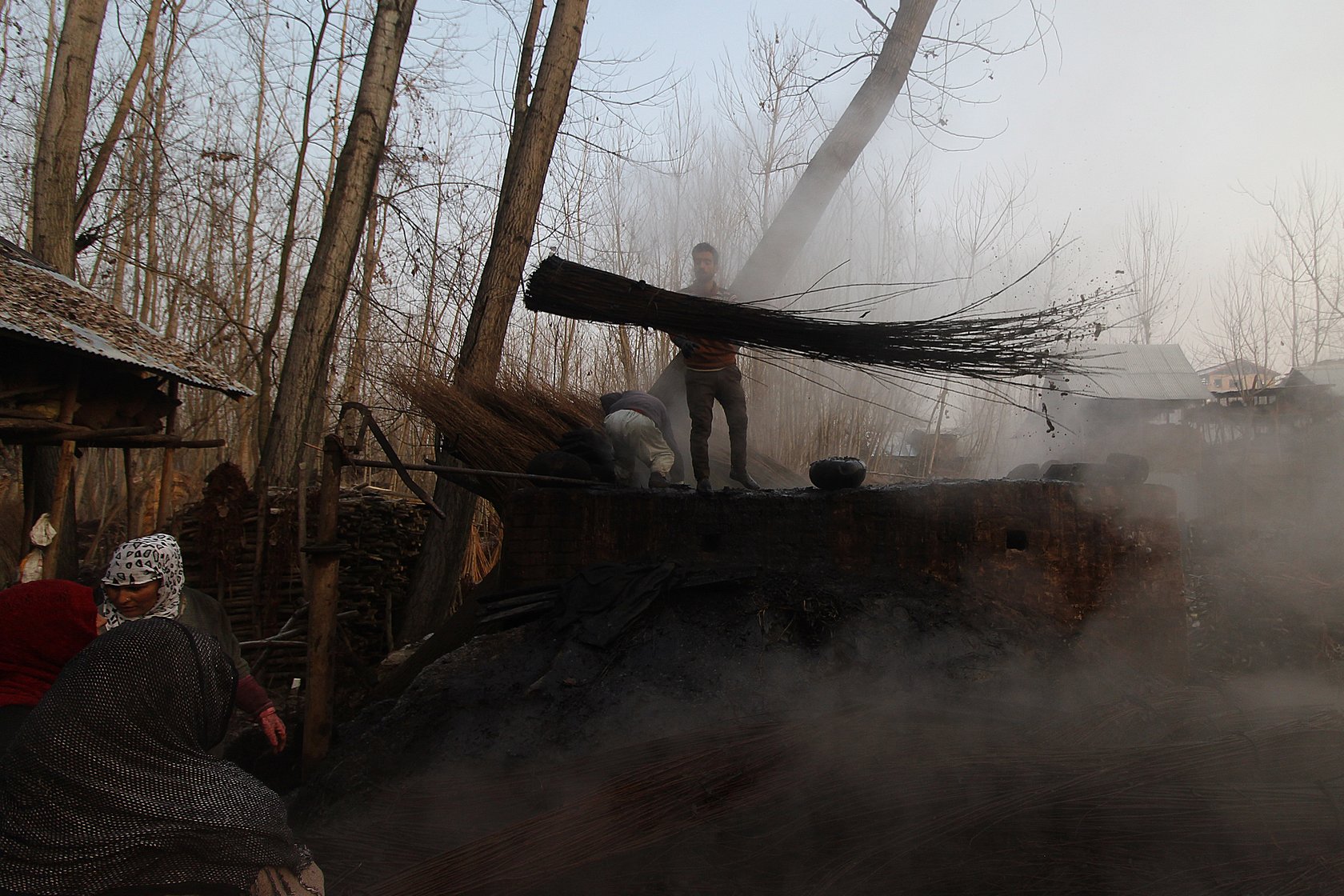 In Umerhere, Ashiq Ahmad, 22, and his father Gulzar Ahmad Dar, 54, at their workshop near their house, taking out a batch of wicker after boiling it overnight. “It is the first process after the wicker is harvested. Soaking the wicker makes it easier to peel off its rough skin,” Ashiq says 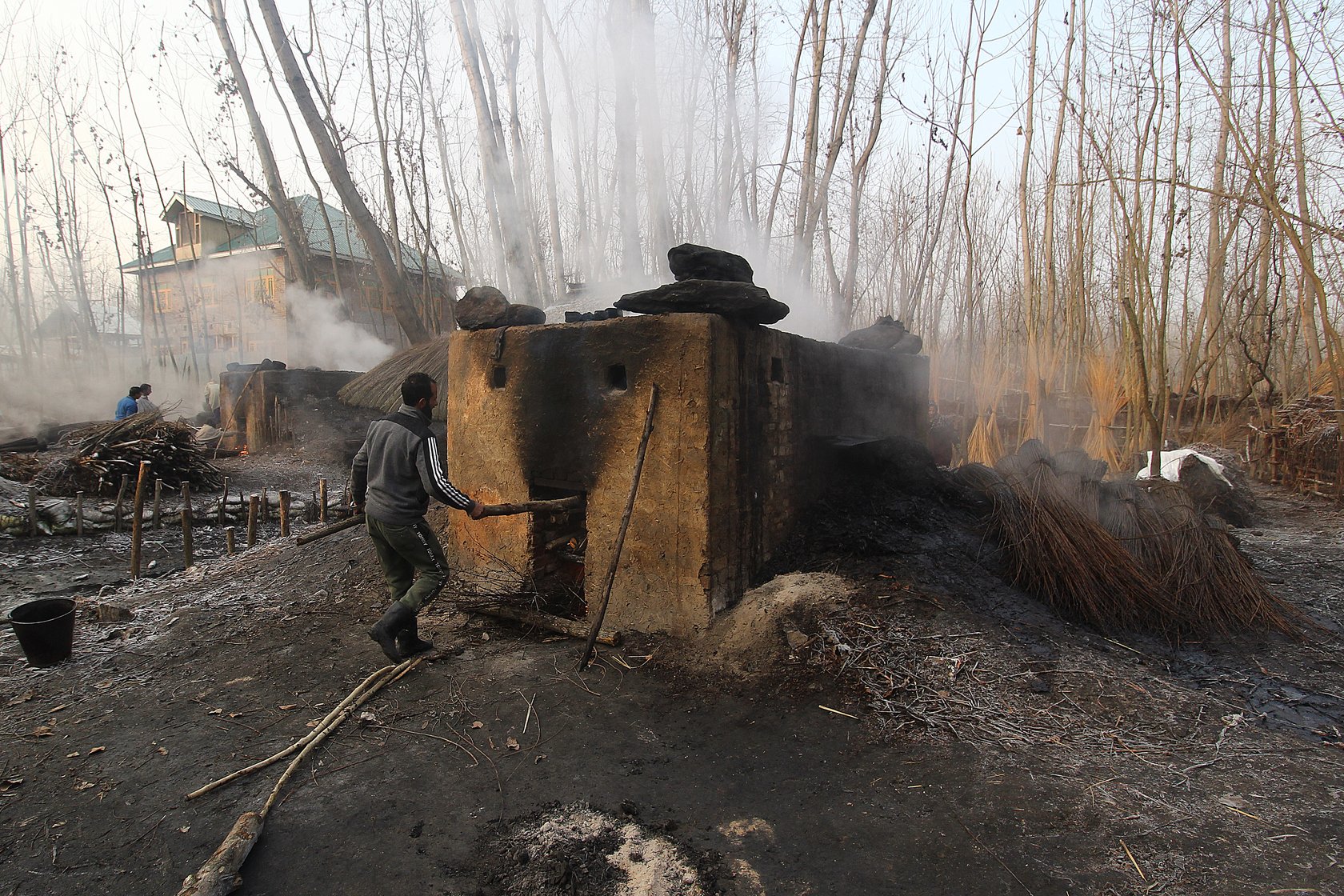 Waseem Ahmad, 32, a resident of Umerhere, fills firewood in the oven in which the wicker is to be boiled overnight 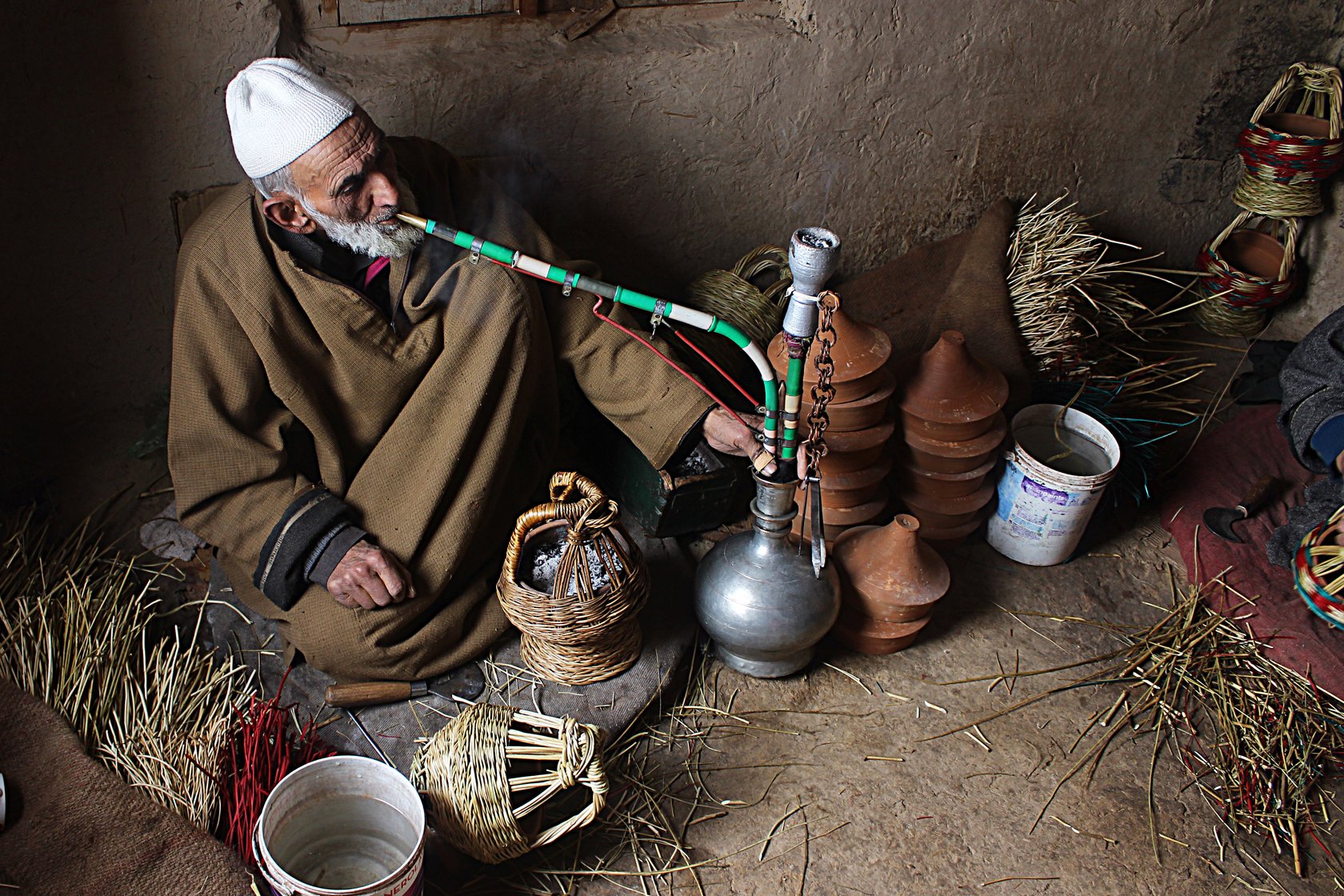 Khazir Mohammad Malik, 86, a resident of Charar-i-Sharief has been in the kangri trade for 70 years. “I inherited this art from my father,” he says. “People in Kashmir cannot survive the winters without a kangri. I feel happy when I see my kangris keeping people warm” 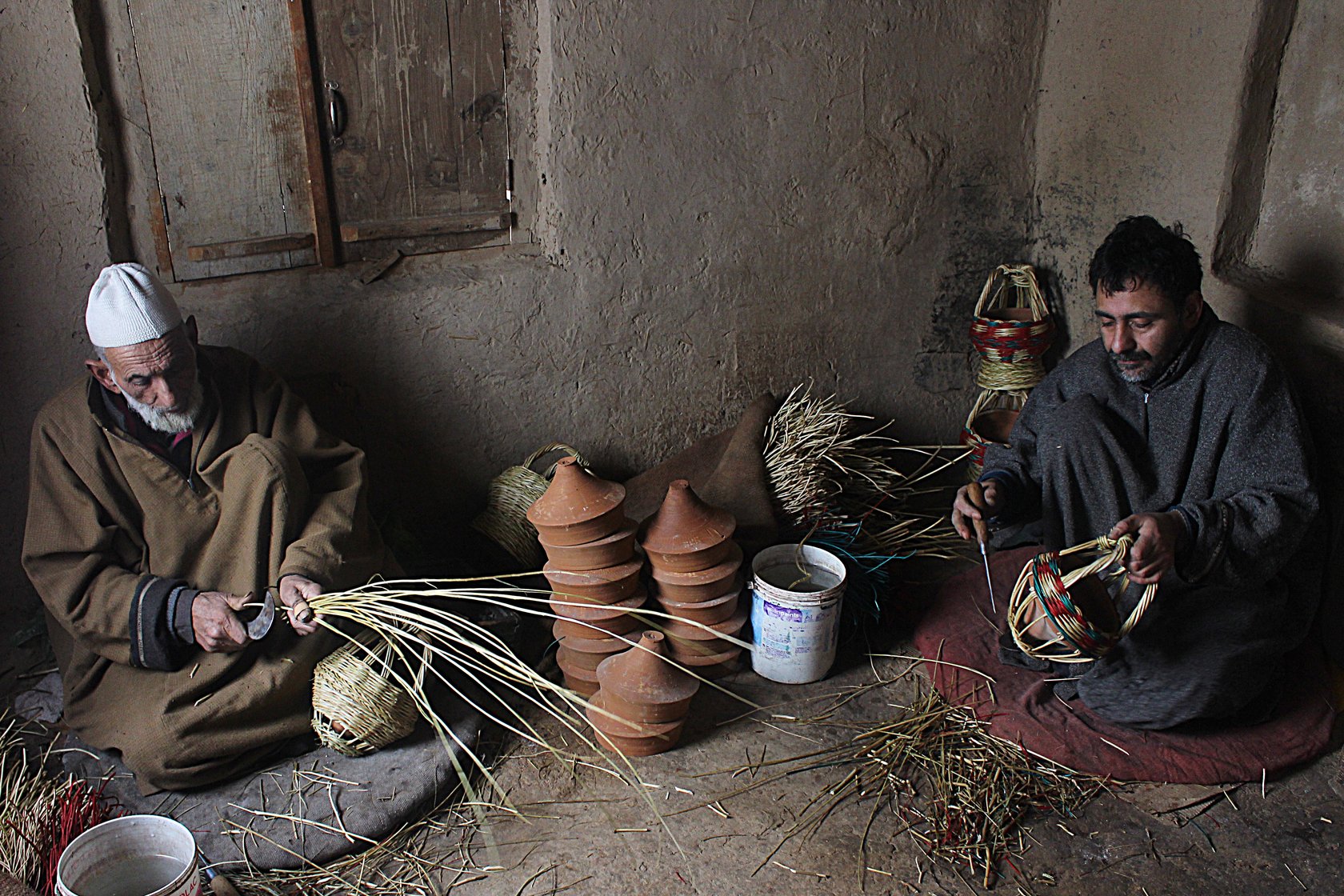 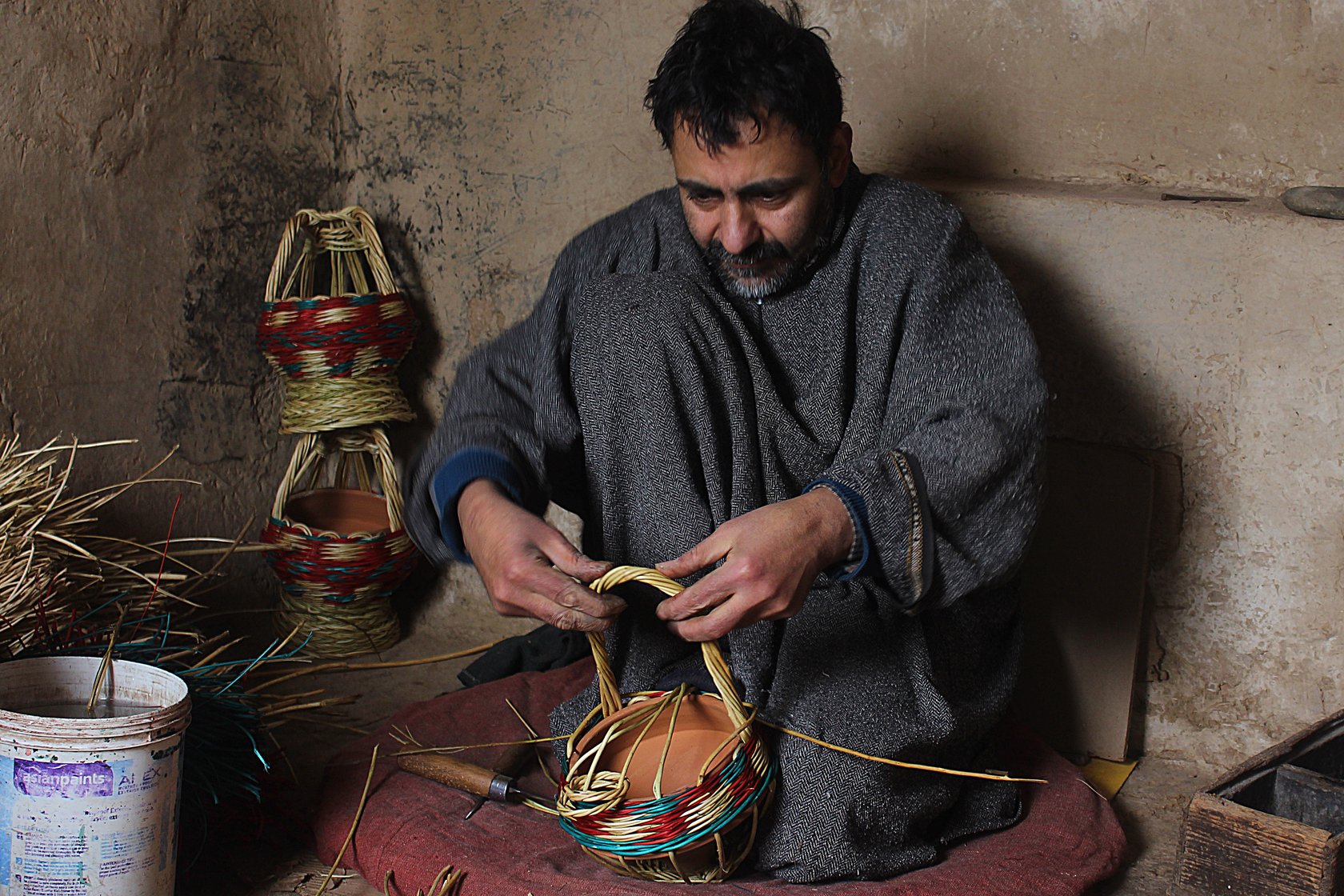 Manzoor Ahmad, 40, a resident of Kanil mohalla in Charar-i-Sharief, has been weaving kangris for 25 years. “I can weave up to 3-4 basic kangris in a day and it takes me 3-4 days to make a high quality kangri,” he says 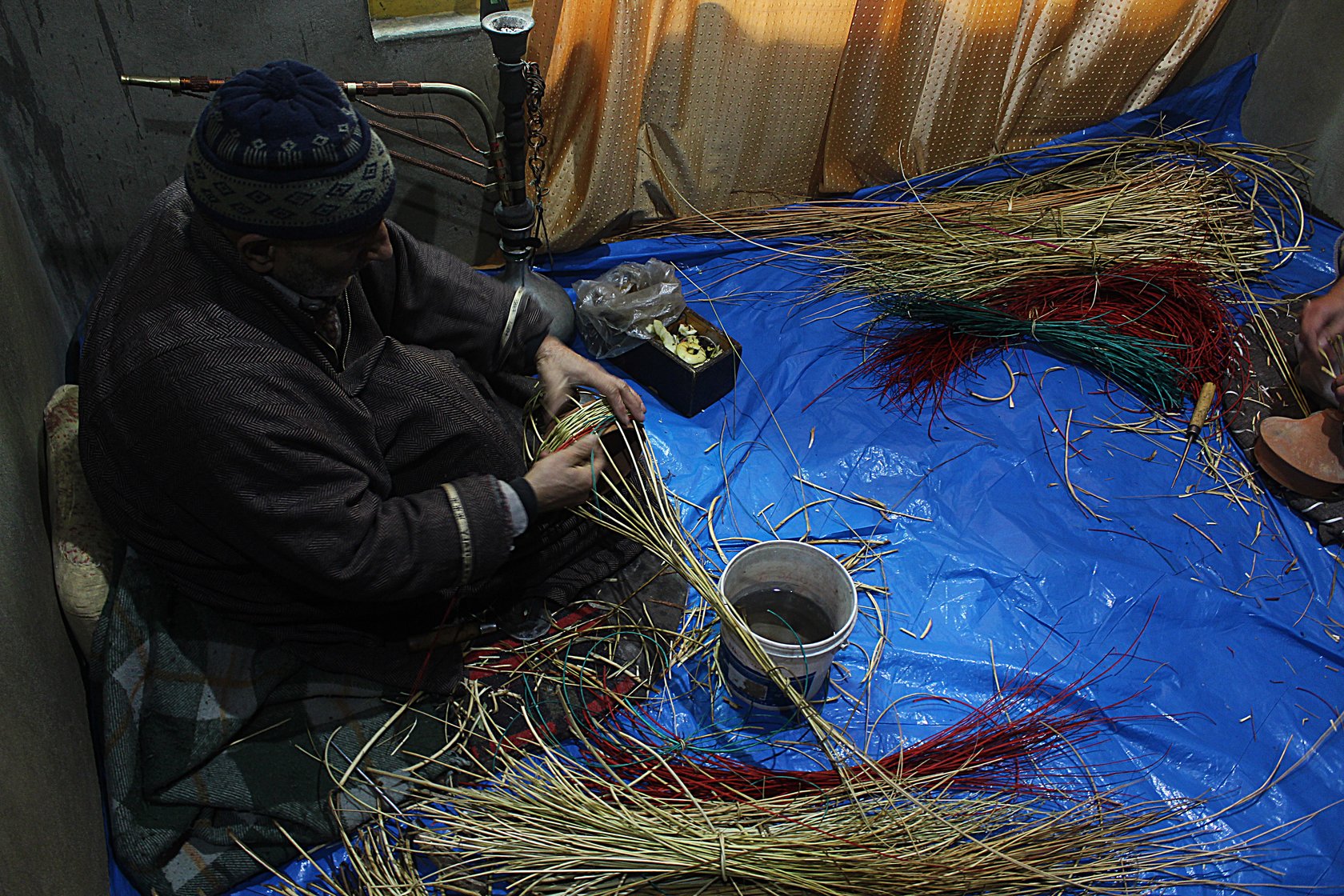 Ghulam Nabi Malik, 64, a resident of Kanil mohalla in Charar-i-Sharief, says “I learned weaving from my father. He used to tell me that if you are not skilled enough you cannot even make the handle of a kangri. It took me nine years to learn to weave a perfect kangri' 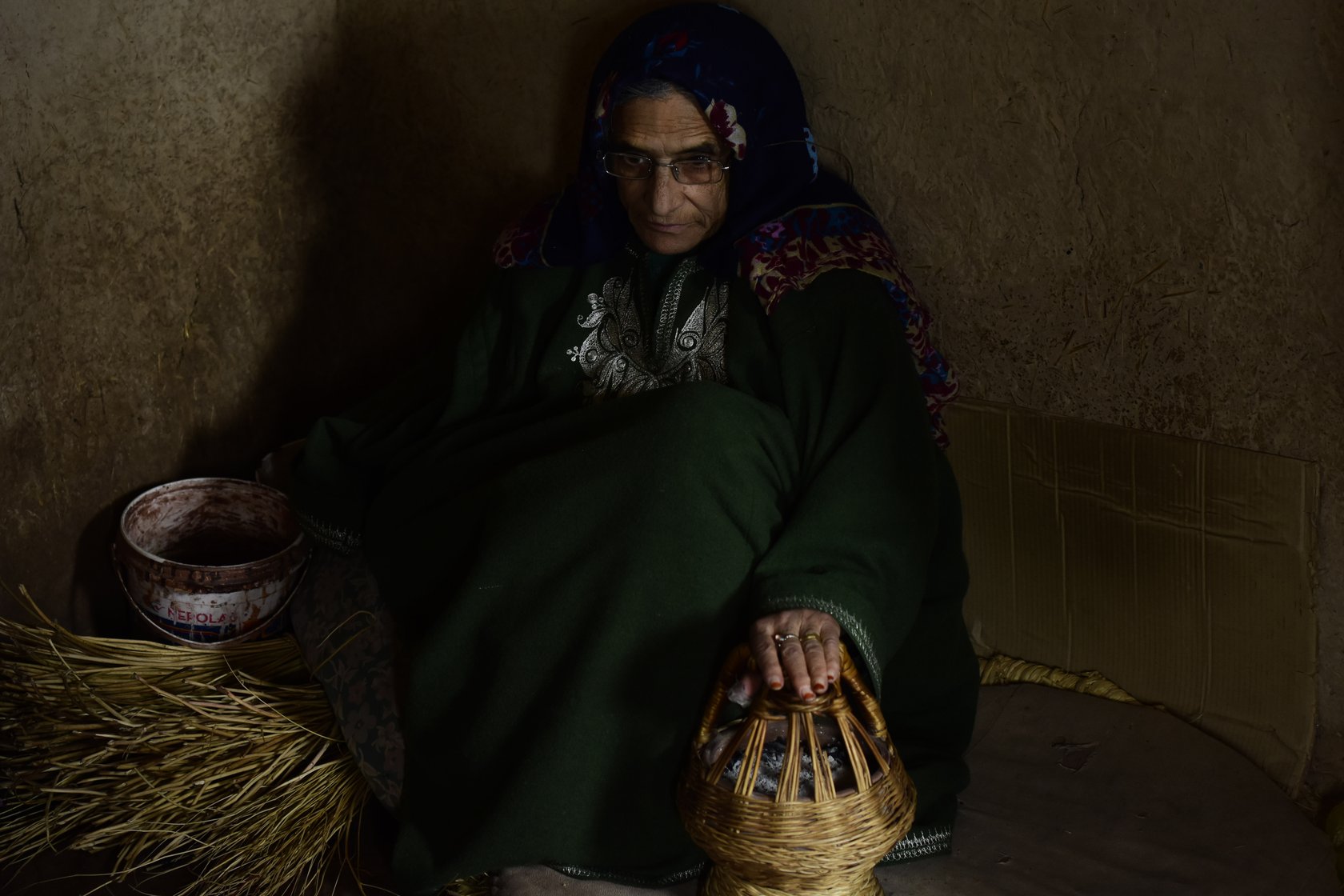 Mugli Begum, a 70-year-old homemaker in Charar-i-Sharief, says, “I have seen my husband [ Khazir Mohammad Malik] weaving kangris for 50 years and I am happy with his work. Watching him weave a kangri is as good as weaving a kangri' 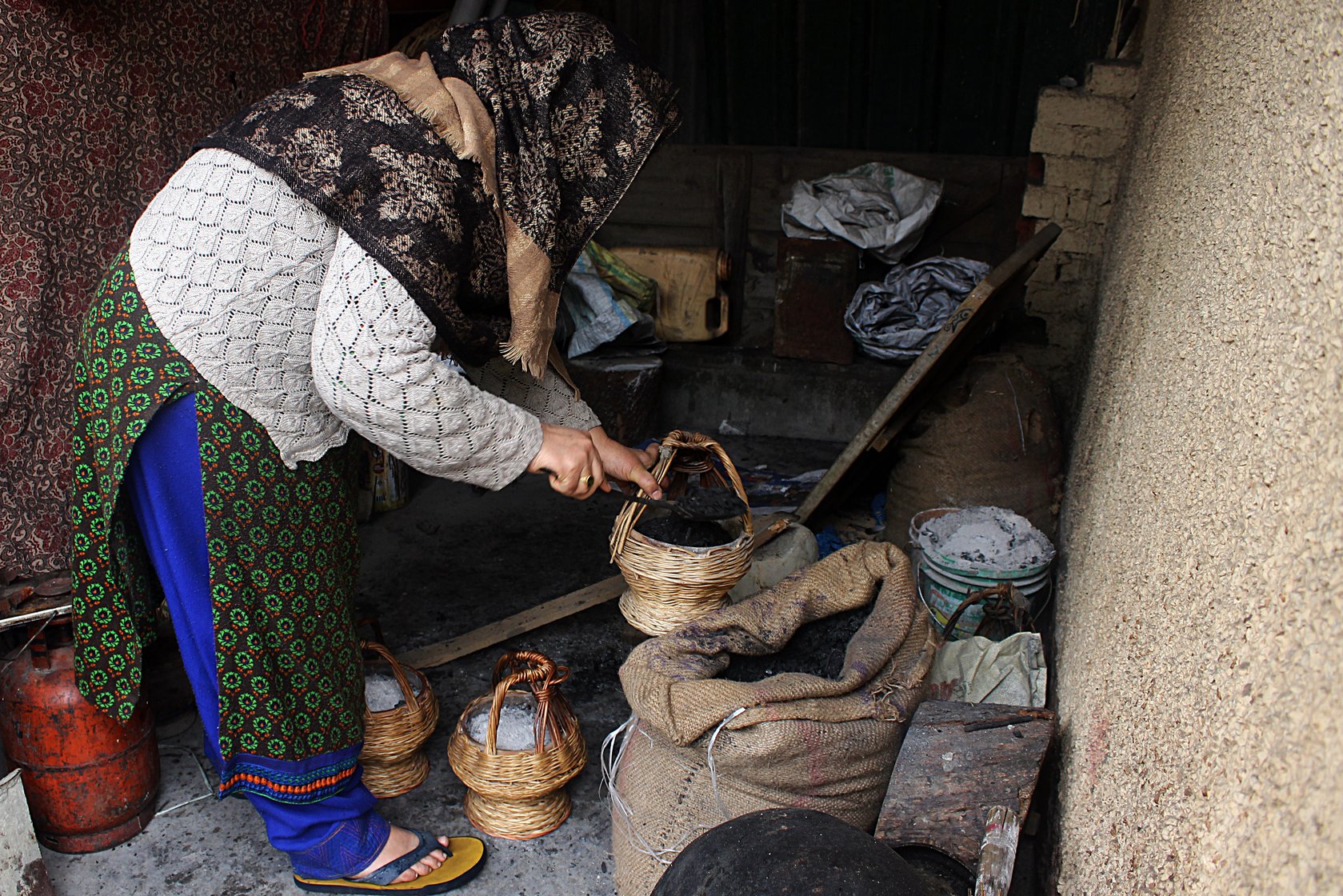 Firdousa Wani, 55, who lives in the Nawakadal area of Srinagar city, filling a kangri with charcoal in a shed (locally called ganjeen ) outside her house early one morning 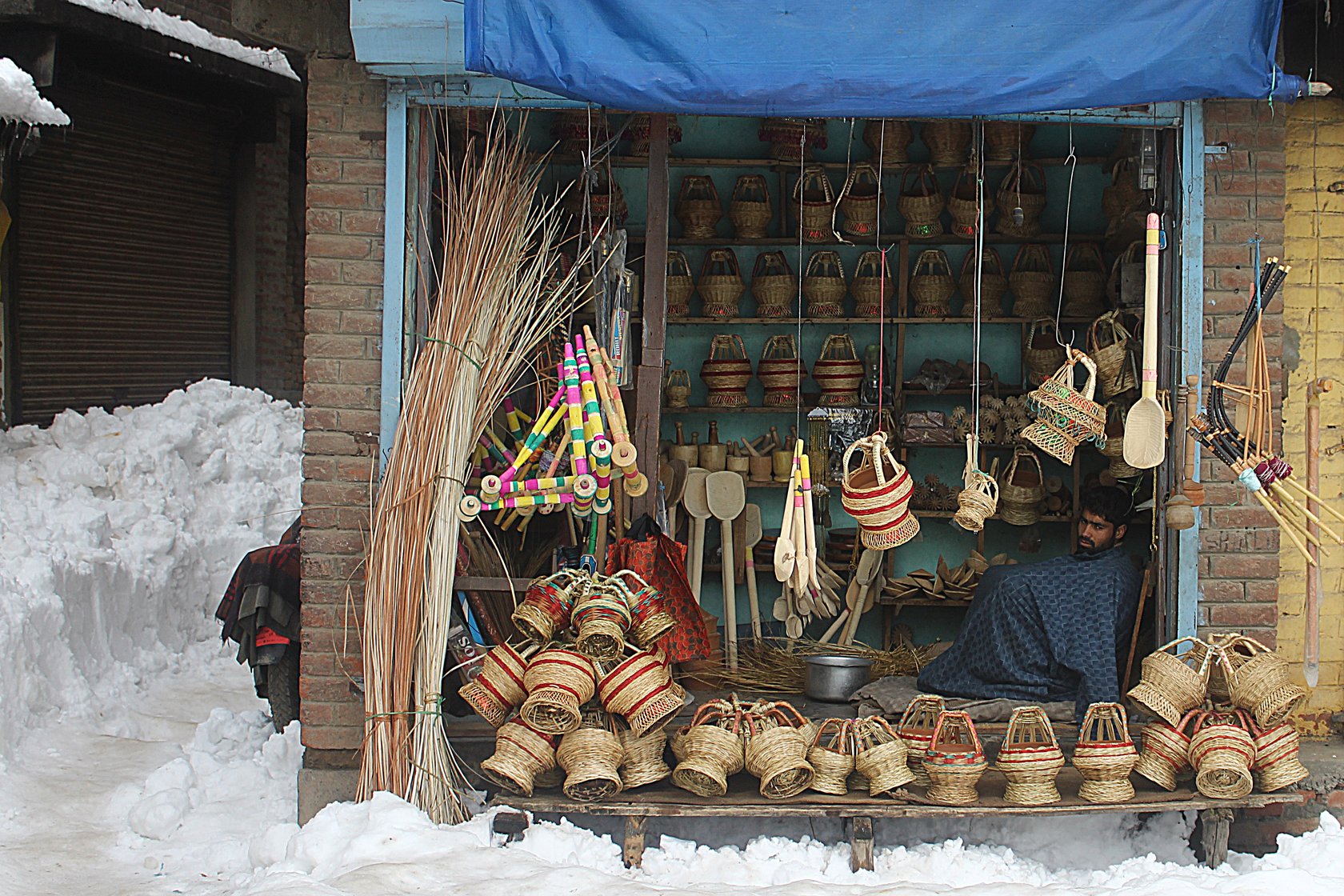 A kangri shop in Charar-i-Sharief, which sees, on average, 10-20 customers a day 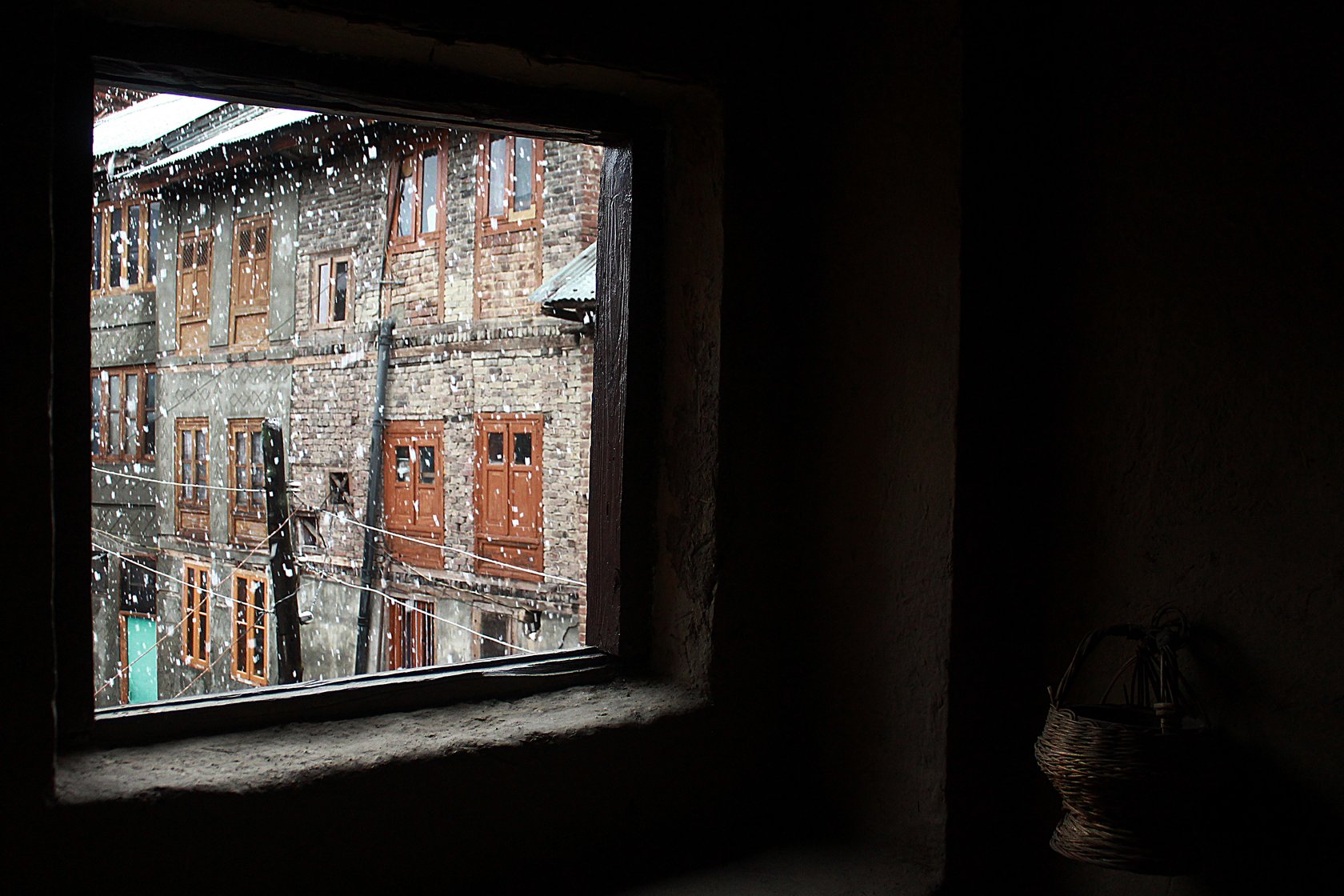