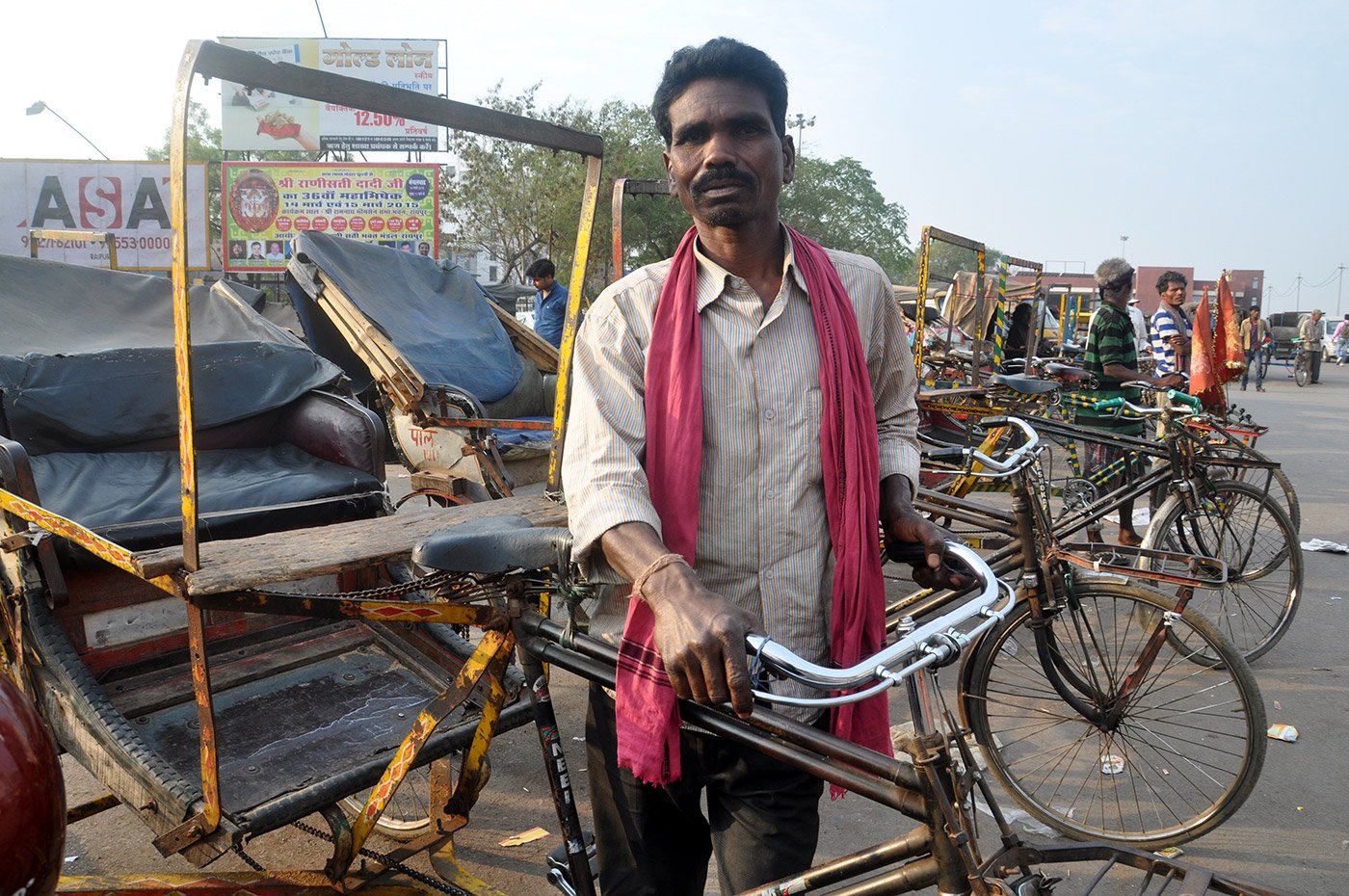 Prasanna's home is his rickshaw

Welfare measures have provided some security to families in Sanmaheswar village of Odisha, but done little to stop Prasanna Sabar and many others from migrating to the cities

Prasanna Sabar has been pulling a rickshaw for more than 30 years. That rickshaw – and sometimes the footpath near the railway station in Raipur, the capital of Chhattisgarh – is also his home. He has never had the means to rent a roof in the city.

When we met one early morning at Raipur station, he was sitting on his rickshaw, waiting for passengers. We spoke to him in his native Kosli (a dialect of Odiya), and he was happy to tell us his story.

Prasanna comes to Raipur from 200 kilometres away, from Sanmaheswar village in Nuapada district of Odisha. Decades ago, when Prasanna, now around 50, first began coming to the capital to pull rickshaws, the daily rent for the vehicle was Rs. 5.  Now it is Rs. 40. He earns a few thousands, returns to his village and family for a few days, and then is back in the city. This cycle has continued for 30 years.

He earns Rs. 100-300 every day. Of this, he spends around Rs. 110 on meals. So over a third of his earnings on a good day – and 100 per cent on a bad one – is spent on basic survival. When he earns a little more, he buys liquor worth Rs. 60. But it’s not an everyday affair, he says. “A few years ago I got in with some fellow migrants and became an alcoholic and gambler. I fell ill and my family had to come and rescue me with Rs. 3,000 borrowed from people in my village. I learnt my lesson and have been  careful since."

Thousands of other Odiyas like Prasanna have migrated to Raipur after major droughts in the state since the 1960s. Most have settled, over generations, in slums on both sides of the railway tracks and in some nearby colonies. But Prasanna was the first in his tribal family to come to the city.

His family consists of his wife, two sons, a daughter-in-law, a grandchild, and his elderly father. “We have just 1.14 acres of land in my father’s name,” he says. “My mother had bought another 80 dismal (0.80 acre) with money they had saved collecting wood for fuel that they sold in a nearby town, walking 12 kilometres every day. But that land now belongs to my paternal uncle."

Prasanna earns a few thousand rupees in Raipur, returns to his home and family in Odisha, and is soon back in the city in Chhattisgarh –  this cycle has continued for 30 years

Prasanna was married when he was just 16. He has two sons – Jitu, the elder son, got married at 23 and has a son of his own. The family spent Rs. 15,000 on the baby’s 21st day ceremony – he was their first grandson.  Do you want him to study, we ask. “Of course," he says, holding his arms up to the sky, “If god lets me live, I will make sure he studies well.”

Prasanna himself studied only till Class 5. Then his parents put him to work on their small piece of land. In 1965, the year Prasanna was born, there was a severe drought in Kalahandi, which was followed by drought every alternate year. When he was just a few weeks old, Prasanna’s parents took him along to see then prime minister Indira Gandhi, who visited Khariar to review the situation. Thousands of people, he says, died of hunger and disease in that drought.

Prasanna's sons don't have much of an education either. Jitu could not clear his Class 10 exam, and the younger one, Rabi, only studied up to Class 7. Both are migrant labourers at construction sites in Mumbai. Boys from the village go in groups to the cities to work. They live at the construction sites and are paid a daily wage of roughly Rs. 300. Many earn more doing overtime work. They return home with a substantial amount after 3-6 months, spend some time with the family or work in the field, and again migrate. So it goes on.

“After the harvest, half the village used to go to Andhra Pradesh to work in the brick kilns. The labour contractors pay Rs. 20,000 and take the whole family to work for them. I never opted for this because I can earn Rs. 30,000 for my family if I spend three months in Mumbai as a construction labourer,” Prasanna says. "Why would I want my entire family to lead such a difficult life?"

Kiln contractors pay Rs. 20,000-30,000 per pathria in advance. A pathria is a unit of three people working at the same brick kiln. The local sardars or agents hand the migrants over to labour contractors, who turn them over to the kiln owners. They spend around six months at the kilns and return to their villages before the monsoon, in the months of May and June.

The journey, the poor living conditions and the hard work often result in ill health. Many of the workers get tuberculosis.  But the money paid in advance lures them. There is no other way to meet major financial exigencies such as the cost of a marriage in the family, health care, constructing a house, purchasing bullocks or repaying loans.

The Mahatma Gandhi National Rural Employment Guarantee Act has not effectively stemmed migration. Payment is irregular and there is no assurance of regular work. Only those who can afford to wait for wages stay back in the village to work in the fields or on MGNREGA worksites.

Prasanna’s family spent around Rs. 100,000 on his younger son Rabi’s marriage last year. The father and sons pooled their earnings and also took a loan from relatives. They served a non-vegetarian feast, and engaged a videographer to film the entire event. "We have two DVDs of the marriage," says Prasanna proudly.

Do you have a BPL (below poverty line) card? “Yes, I have a BPL card and my father has one too," Prasanna replies. The family gets 25 kilos of rice at Re. 1 per kilo on each card under the public distribution system (PDS). That's 50 kilos of rice for Rs. 50 and four litres of kerosene for Rs. 70 every month.

The subsidised rice is a huge help for families like Prasanna's – it keeps starvation at bay. Earlier, people took on any kind of work for small quantities of foodgrain. The PDS has enabled them to bargain for slightly better terms, and wage rates have been revised as a result. The subsidy allows families to think beyond food, to health care and education.

Prasanna's father also gets a pension – Rs. 300 a month for those over 60 and Rs. 500 for those over 80. The PDS and the old age or widow’s pensions turn the elderly into contributing members of the family, giving them a new dignity.

Though the welfare measures have provided a measure of security to many communities here, they have not stemmed migration from these villages. So Prasanna and others still go to the cities looking for work.