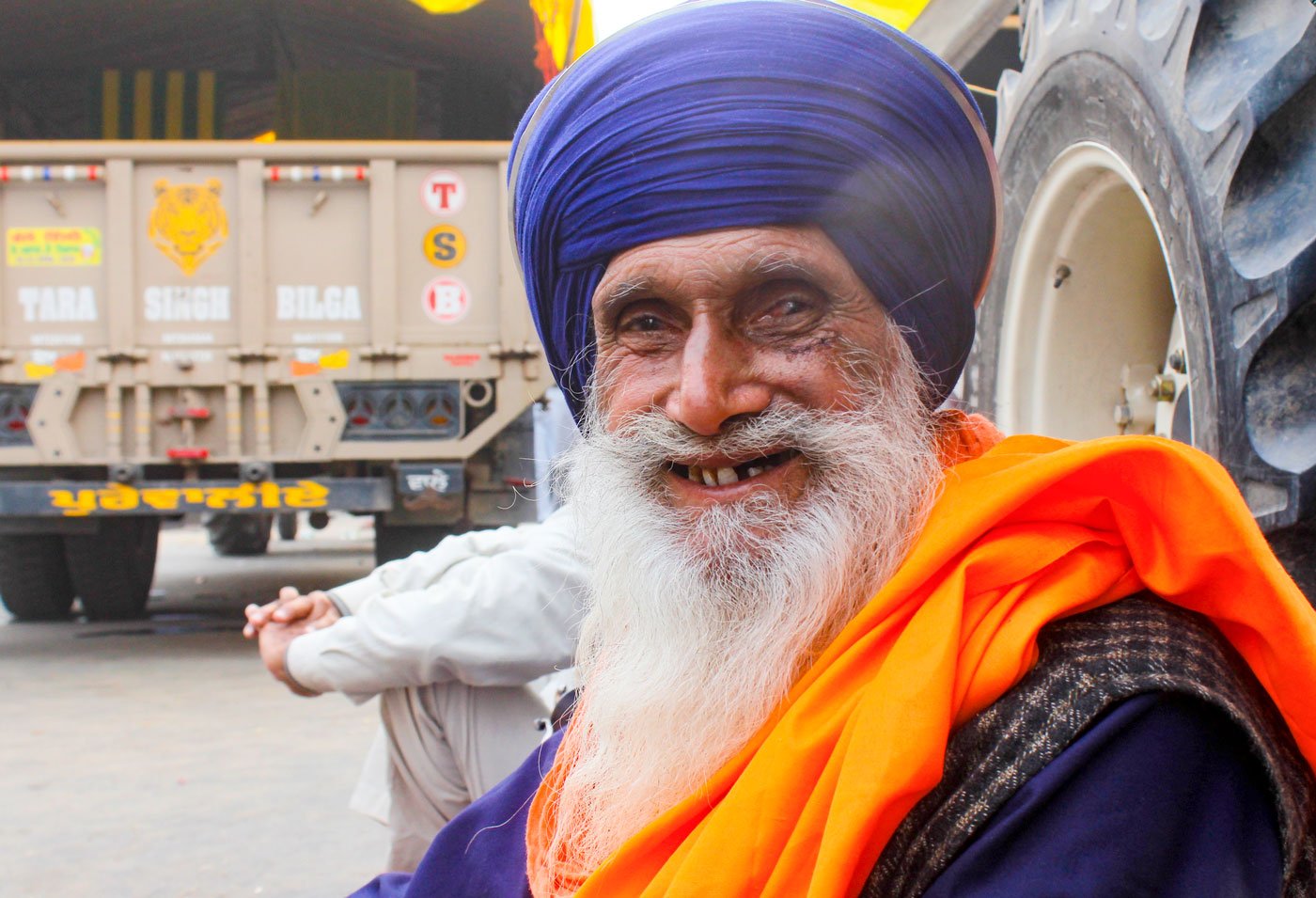 ‘People told me that I was bleeding heavily…’

The day he arrived at Singhu from his village in Punjab, on November 27, 70-year-old Sardar Santokh Singh was hit by a tear gas shell – despite the injury, he remains steadfast at the protest site

It’s been more than a month since a tear gas shell wounded Sardar Santokh Singh in skirmishes between farmers and security forces at Singhu, on the Haryana-Delhi border.

But the 70-year-old is still at Singhu, protesting against the new farm laws. "We were sitting there peacefully and suddenly we heard firing,” he says of November 27, the day the shell hit him below his left eye.

The day before, 17 people had left from Gharka, his village in Tarn Taran district of Punjab, and reached the Delhi border the next morning. “When we arrived, there were around 50,000-60,000 people gathered here. I went and sat with the other protestors, listening to a speech,” recalls Santokh Singh

Around 11 a.m., scuffles and chaos broke out, and in a while the water cannons and tear gas shells began raining down. “The youngsters in front of me got up, jumped over me, and ran to the other side. I got up and stabilised myself,” says Santokh Singh. “I yelled at the security forces: ‘Why are you provoking us? We were sitting here peacefully’. They replied, angrily: ‘We have to do this to chase away the crowd’. Just then the kid in front of me ducked when he saw an oncoming shell, and it hit me instead. But I didn’t move at all.”

Sardar Santokh Singh, who has spent a lifetime cultivating paddy and wheat in his village in Punjab’s Chola Sahib tehsil , adds, “I didn’t even realise that I had been injured until a crowd gathered around me. People told me that I was bleeding heavily and offered to take me to the hospital. But I refused and called back the protestors who ran. Don’t run away, I said. Keep moving forward. We have not come this far to go back. I wanted to ask the government forces why they attacked us. I dared them to come down and fight me. Their bullets won't scare us.”

After the shell hit him, Singh endured eight stitches and a blood clot in his left eye. “Youngsters from my village took me to a hospital near the protest ground. That hospital refused to let us in and closed their door on us. It was complete chaos. Luckily, there was an ambulance on standby that had come from Punjab. They came rushing towards us and helped with the stitches and medicines. They were also treating other injured people hit by tear gas.” 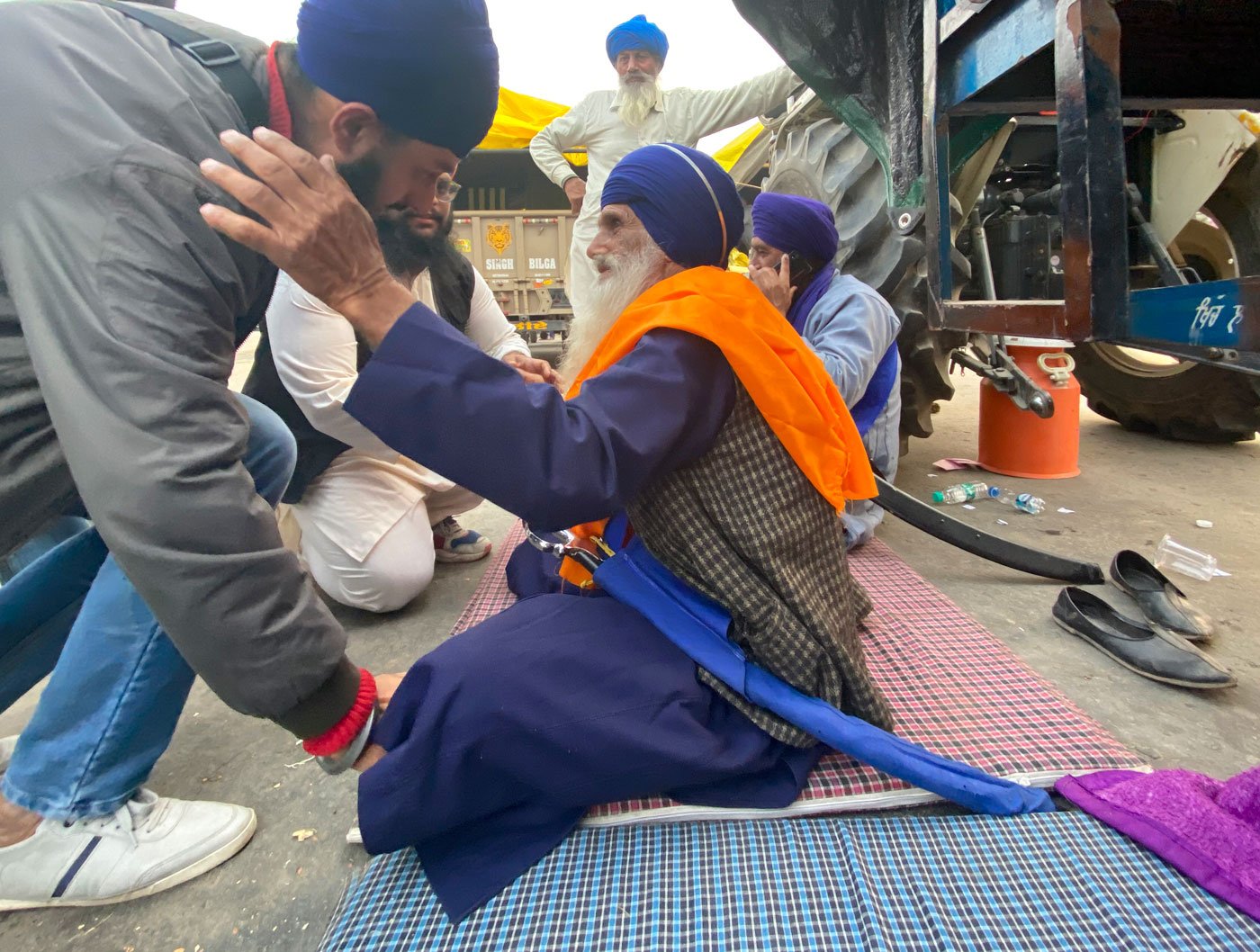 Santokh Singh recounts that day with a smile on his lips and dash of honour in his voice: 'This injury is nothing compared to what we endure on the fields'

Santokh Singh recounts that day with a smile on his lips and dash of honour in his voice. “This injury is nothing compared to what we endure on the fields. Deep wounds are common at the time of harvesting. I am a farmer, I am used to blood. Do they think their shells will make us run away?”

It’s been over a month since this incident, and Singh and the other protesters are still at the border, still determined as one round after another of talks with the government has failed.

The laws were first passed as ordinances on June 5, 2020, then introduced as farm bills in Parliament on September 14 and rushed through as Acts on the 20th of that month. The farmers see these laws as devastating to their livelihoods by expanding the space for large corporates to exercise even greater power over farmers and farming. They also undermine the main forms of support to the cultivator, including the minimum support price (MSP), the agricultural produce marketing committees (APMCs), state procurement and more.

“The government’s plan is to make us sit for long so that we get tired and go back on our own. But they are wrong in thinking that. We didn’t come here to go back. I have said this before and say it again: we have no problem in sitting here. We have tractors and trolleys full of rations. Our Sikh brothers are providing us with everything we need. We will not go back until they give us our rights. Our fight is to get these laws repealed. Not doing so will ruin us and our generations to come. We have to do it for them and their future. We will only leave when we get our rights, not before that.”

Other stories by Kanika Gupta