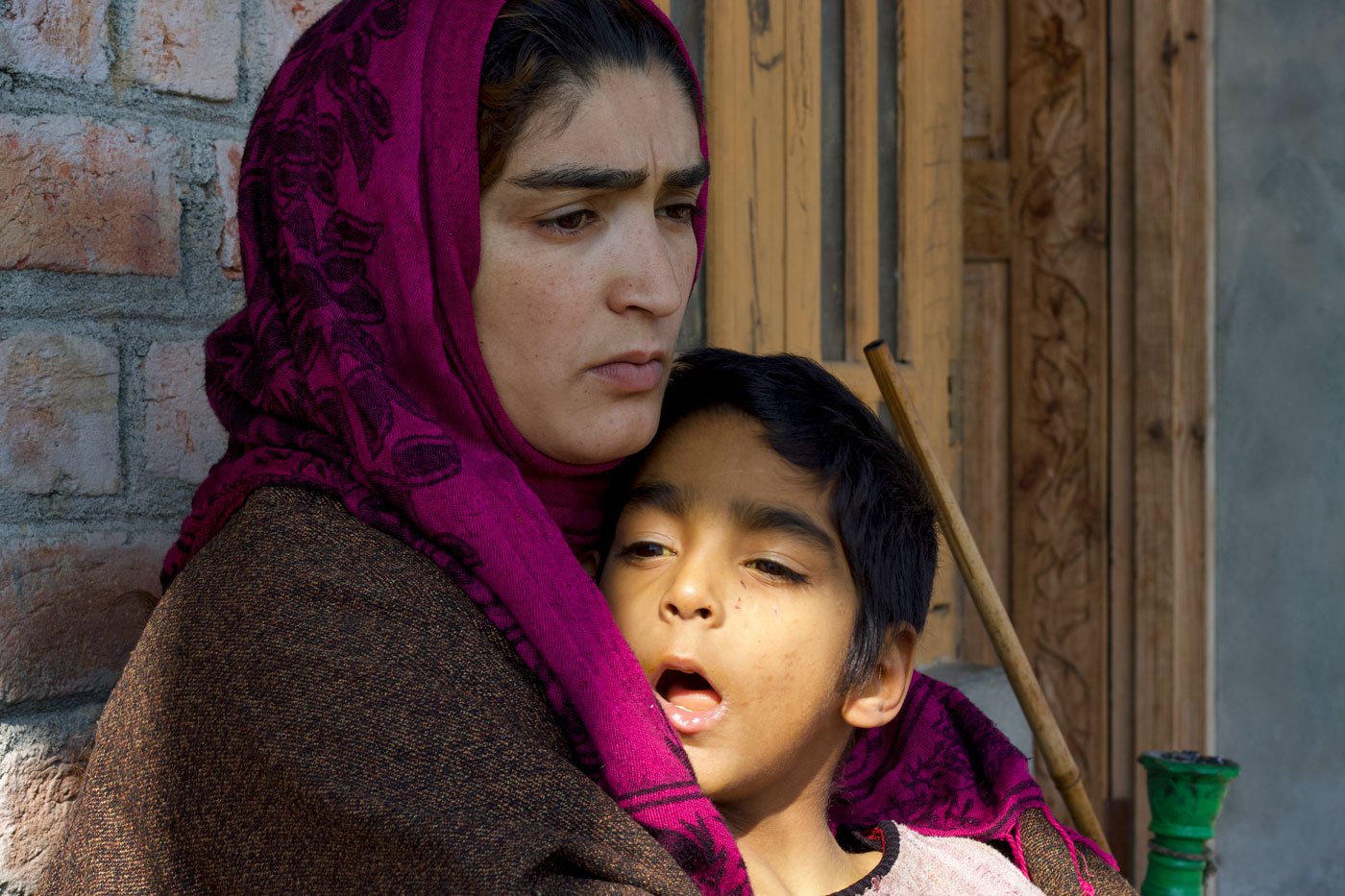 Mohsin will never walk, go to school or play

After moving to the remote Rakh-e-Arth resettlement colony in Srinagar, the Akhoon family has faced severe challenges in accessing healthcare for their son, who has cerebral palsy, and in finding wage work

The unfinished muddy lanes stretch on for kilometres. Across these, the journey to the hospital in Soura is a recurring battle. Mubina and Arshid Hussain Akhoon have to visit the hospital at least once a month for their son Mohsin’s medical consultations. Arshid carries the nearly nine-year-old boy in his arms, across lanes overflowing at times with sewage and melting snow in the Rakh-e-Arth resettlement colony.

They are usually able to locate an autorickshaw after walking for 2-3 kilometres. It ferries them, for Rs. 500, to the Sher-i-Kashmir Institute of Medical Sciences in the Soura locality of north Srinagar, around 10 kilometres away. At times, the family has had to walk the entire distance – they did this especially during last year’s lockdown – to reach the hospital. “That takes an entire day,” Mubina says.

It’s been around nine years since Mubina and Arshid’s world changed. Mohsin was barely a few days old in 2012 when he got fever and jaundice, with extremely high levels of bilirubin. A series of visits to doctors followed. He spent two months at the state-run G.B. Pant Hospital for children in Srinagar. Finally, they were told their baby is ’abnormal’.

“When his condition didn’t improve, we took him to a private doctor who told us that his brain is completely damaged and he will never be able to sit or walk,” recalls Mubina, who is in her 30s.

Eventually, Mohsin was diagnosed with cerebral palsy. Since this diagnosis, Mubina has spent most of her time tending to her son and his health care. “I have to clean his urine, wash his bed, wash his clothes and make him sit. He is in my lap all day,” she says. 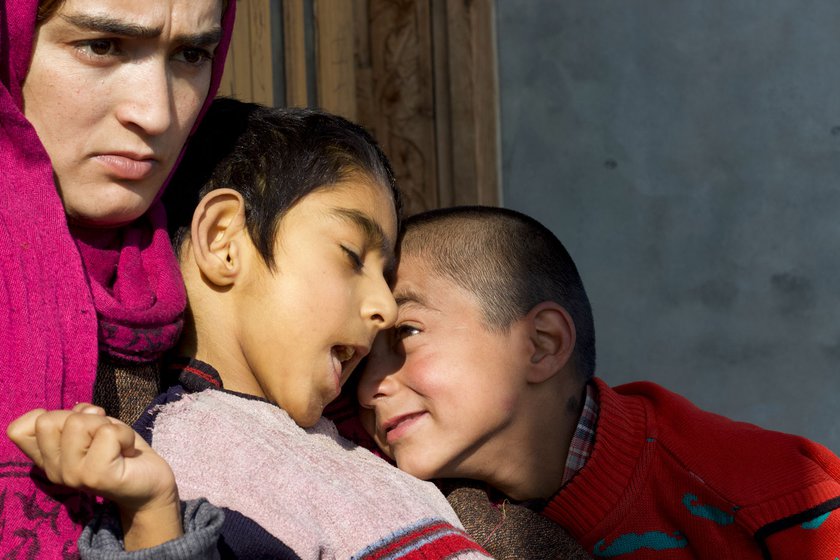 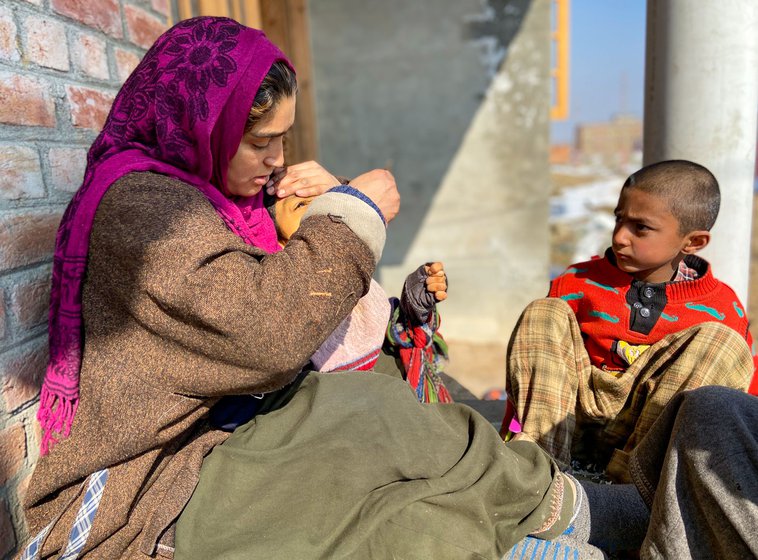 'When his condition didn’t improve, we took him to a private doctor who told us that his brain is completely damaged and he will never be able to sit or walk'

Until 2019 though, before the family moved to the Rakh-e-Arth resettlement colony of empty concrete structures with cracked walls and unfinished roofs, their struggles were somewhat less acute.

They lived then in the Mir Behri locality of Dal Lake. Mubina had work and an income. “For 10 to 15 days in a month, I used to cut grass in Dal Lake,” she says. With this, she made mats that sold for Rs. 50 each in the local market. She also extracted lilies from the lake and earned Rs. 300 for four hours of work, some 15 to 20 days in a month. Arshid worked as an agricultural labourer for up to Rs. 1,000 a day for around 20-25 days a month (in season), and sold vegetables in a mandi for a profit of at least Rs. 500 a day.

The family’s monthly income was robust, they managed to get by well. And the hospitals and doctors they had to visit for Mohsin were accessible from Mir Behri.

“But I stopped working after Mohsin was born,” Mubina says. “Then my mother-in-law said that I was always busy with my son and didn't have time to help her around the house. What was the point of keeping us there [in Mir Behri]?”

So Mubina and Arshid were asked to move out. They built a small tin shed nearby. That flimsy dwelling was damaged by the floods of September 2014. They moved in with relatives, and then moved yet again – each time staying in makeshift sheds.

But each time, the doctors and hospitals for Mohin’s regular checks ups and medication were within reach. 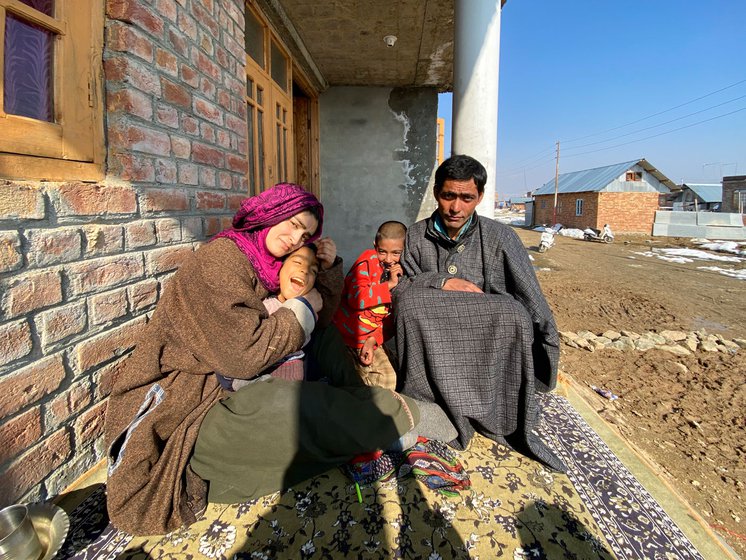 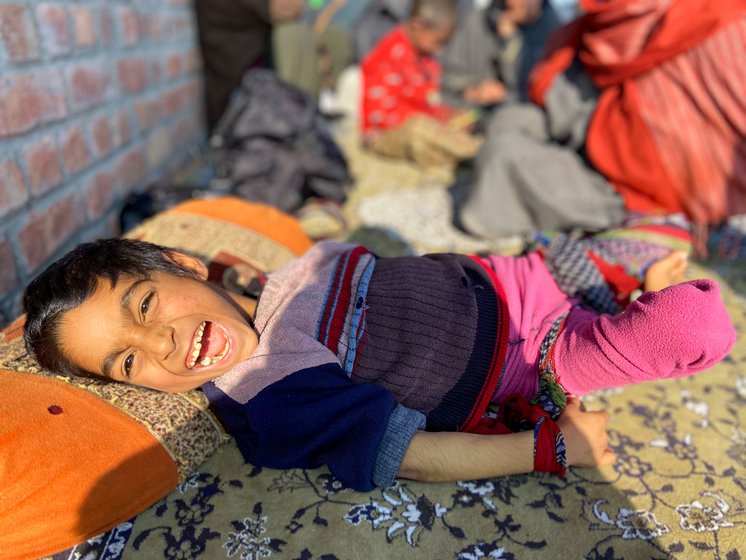 The family sitting in the sun outside Arshid’s parents’ home in Rakh-e-Arth, Srinagar

In 2017 though, the J&K Lakes and Waterways Development Authority (LAWDA) started a ‘rehabilitation’ drive in the Dal Lake area. Officials approached Arshid’s father, Ghulam Rasool Akhoon, who is in his 70s and a farmer on the lake’s islands. He took up their offer of around Rs. 1 lakh for constructing a house on a roughly 2,000 square-foot plot of land at Rakh-e-Arth, the new resettlement colony about 12 kilometres from Dal Lake, in the Bemina locality.

“My father said that he was leaving and I could go with him or stay where I was. By this time, we had one more son – Ali was born in 2014. I agreed to go with him. He gave us a small space behind his house [in Rakh-e-Arth] where we built a small hut for the four of us,” says Arshid.

That was in 2019 and the Akhoons were one of around 1,000 families who moved to this faraway colony that has neither roads nor proper transportation, no schools or hospitals, and no work options either – only water and electricity are available. “We have developed the first cluster [out of three] and 4,600 plots. So far, 2,280 families have been issued plots of land,” says Tufail Mattoo, vice chairman, LAWDA.

To try and find some daily wage work, Arshid goes to a labour naka around three kilometres from Rakh-e-Arth. “Many people come there at 7 in the morning,” he says, “and wait until noon to find work. I usually get work at construction sites to move stones.” But this work is available for barely 12-15 days in a month for a daily wage of Rs. 500, and is a steep fall from his earnings when the family lived on Dal Lake.

When work is not available, they try to manage with their savings, says Arshid. “But when we don't have money, we can’t take Mohsin for his treatment.” 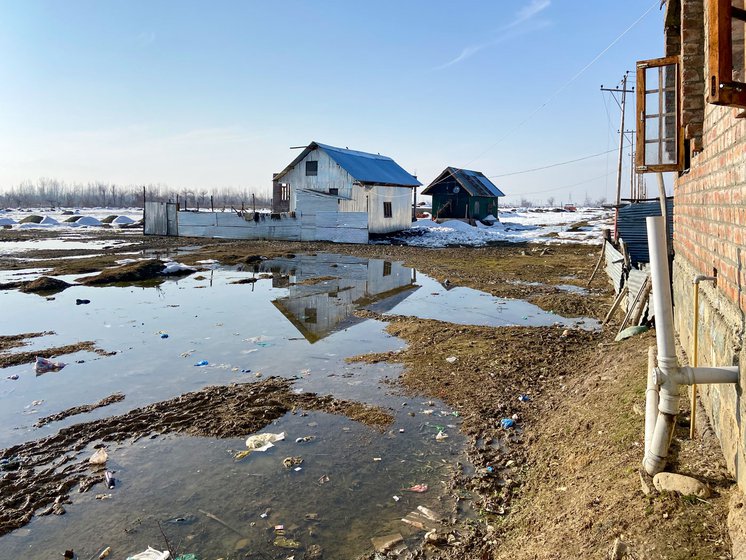 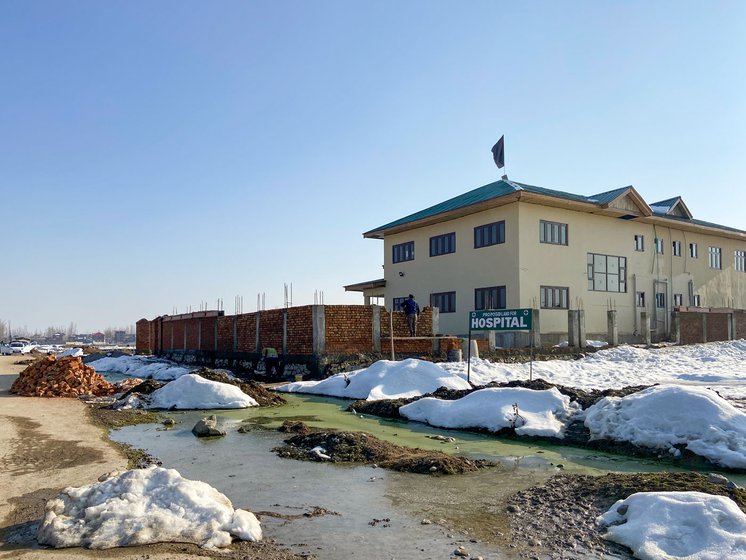 Rakh-e-Arth has just one sub-health centre that can only handle basic healthcare functions; for emergencies people have to travel to the urban primary health centre at Pantha Chowk, 15 kilometres away. Or, like the Akhoon family, they have to go to the hospital in Soura

Rakh-e-Arth has just one sub-health centre that can only handle screening for non-communicable diseases such as diabetes and hypertension, and children’s immunisation and ante-natal check-ups for pregnant women, says Dr. Sameena Jan, zonal medical officer of Srinagar’s Batamaloo province, within which the resettlement colony is located.

A health centre and a hospital are being constructed at Rakh-e-Arth, and “the building is complete and should be functional soon,” says Tufail Mattoo of LAWDA. “As of now, only a small dispensary in the sub-health centre is functional. We have a doctor coming in for a few hours in a day.” So for emergencies people here have to travel to the urban primary health centre at Pantha Chowk, 15 kilometres away. Or, like the Akhoon family, they have to go to the hospital in Soura.

Mubina’s own health has deteriorated since they moved to this colony, and she suffers from palpitations. “My child is sick, due to which I face a lot of problems as well,” she says. “His hands don’t work, his feet don’t work, his brain doesn’t work. I keep him in my lap from morning to evening. By the end of the day, my body is in deep pain. I have fallen sick worrying about him and taking care of him. If I go to the doctor, they ask me to get treated, get more tests. I don’t even have an income of Rs. 10 to be able to pay for my treatment.”

Her son’s regular medicines cost Rs. 700 per batch and last for about 10 days. He has to be taken to the hospital almost every month to take care of recurring fevers, ulcers and rashes. The treatments should ideally be free on a labour card issued by the Jammu and Kashmir Building and Other Construction Workers Welfare Board, which entitles Arshid to medical benefits for his dependents up to Rs. 1 lakh a year. But he has to pay a small annual fee to keep the card valid, and that requires a certificate of 90 days of employment at the time of renewal. Arshid has not managed to do all this regularly. 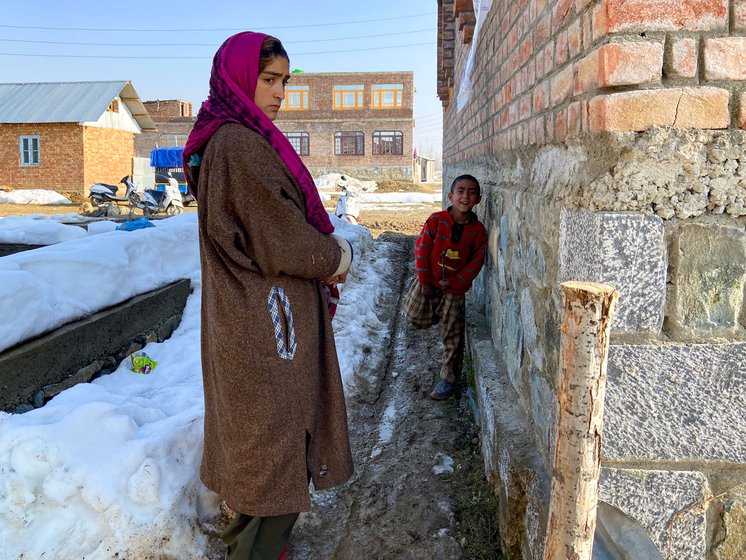 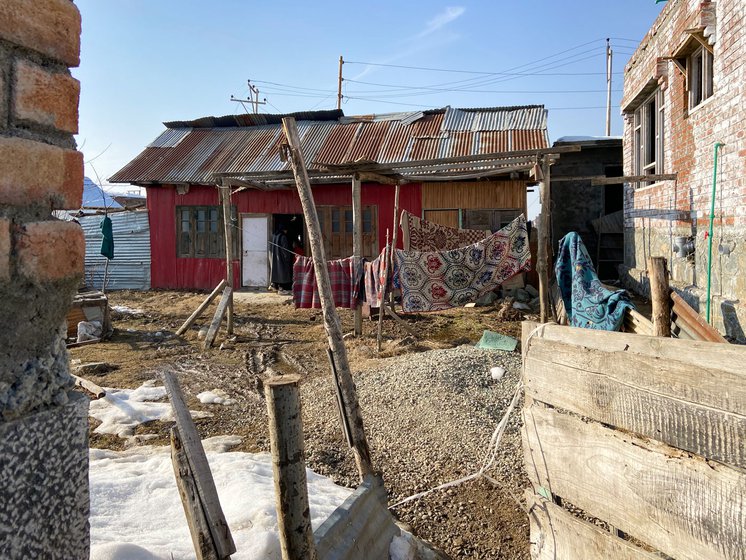 Left: Younger son Ali says, 'My father doesn’t have money, how can I go to school?' Right: The family's tin home behind Arshid's father’s house

“Mohsin will not be able to walk, go to school, play, or do activities like other normal children,” says Dr. Mudasir Rather of the G. B. Pant Hospital. The doctors can only provide supportive treatment to take care of infections, seizures and other health issues that may come up, and physiotherapy for spasticity. “Cerebral palsy is a non-curable neurological disorder,” explains Dr. Asiya Unjum, a paediatrician at the Government Medical College, Srinagar. “If neonatal jaundice is not treated properly at the time of birth, it can lead to this condition. It can cause brain damage, movement disorder, spasticity, mental retardation.”

Struggling to find work and juggling between doctors, Mubina and Arshid spend most of their time and money taking care of Mohsin and looking after their younger son. Ali, around seven years old, complains, “She keeps bayaa [brother] in her lap all the time. She never holds me like this.” He finds it hard to connect to his brother because “he doesn’t talk to me or play with me, and I am too small to help him.”

Ali does not attend school. “My father doesn’t have money, how can I go?” he asks. Besides, there are no schools in Rakh-e-Arth. The one promised by LAWDA remains incomplete. The nearest government school is in Bemina, some two kilometres away, and it’s for older kids.

“Within six months of moving to Rakh-e-Arth,” Mubina says, “we knew we will not be able to live here for long. The condition here is really bad. We don’t even have transport options to take Mohsin to the hospital. And when we don’t have money [for that], we face a big problem.”

“There is no work here,” adds Arshid. “What do we do? I will look for work, or take a loan. We don’t have any options.”