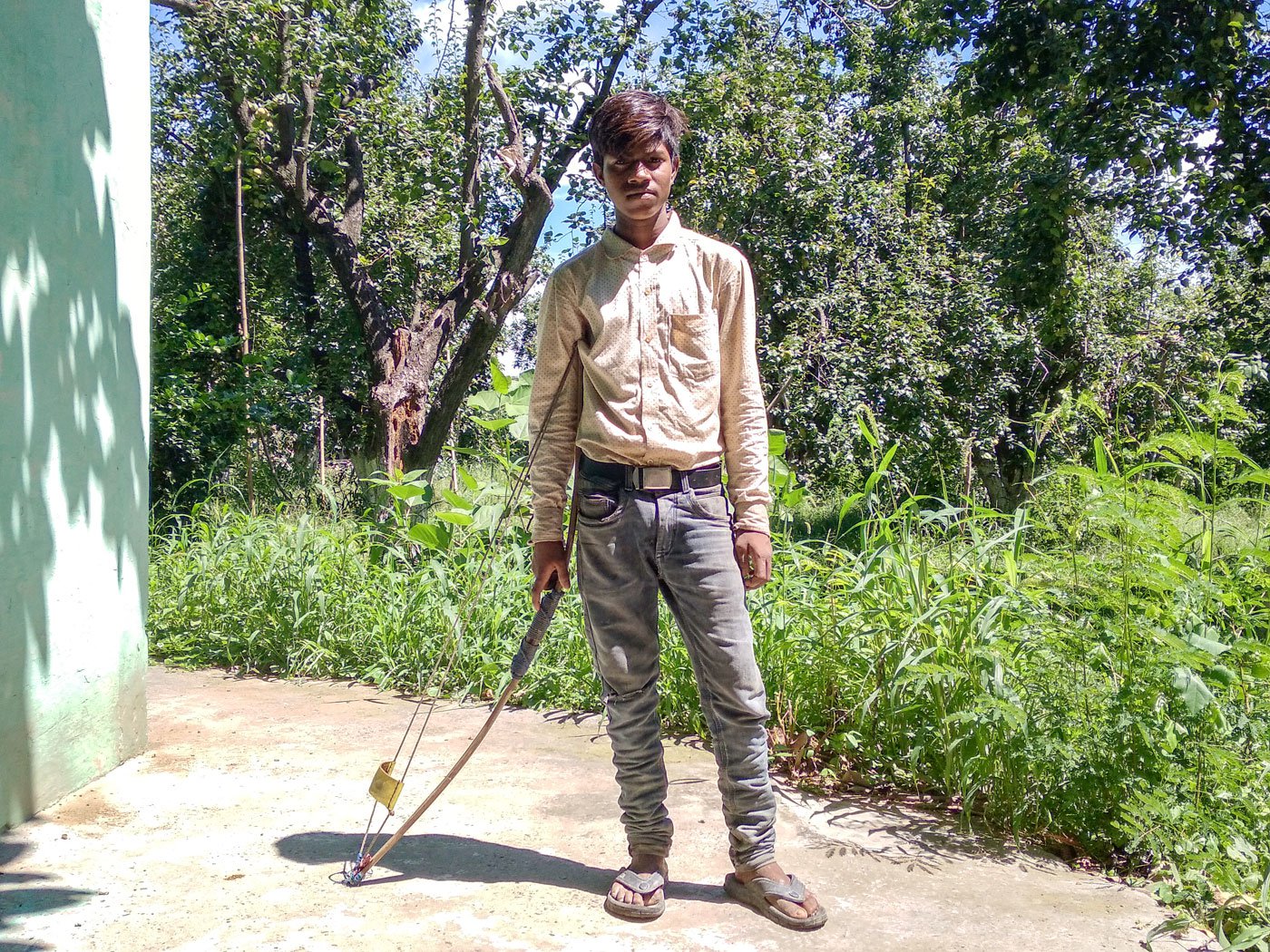 In Punjab’s Tarn Taran district, fruit orchards are manned by migrant labour like Suraj Bahardar. The 15-year-old travelled from Bihar with little knowledge of the work or working conditions here

Suddenly the sky above the orchard fills with countless birds. The winged creatures have been frightened into flight by the noises Suraj is making to evict them. As the caretaker of this pear orchard, keeping hungry birds away from the ripening fruit is his job. To scare them away he yells loudly and also tries shooting roda (clay pellets) from a kaman (bow) or gulel (a catapult).

Situated on the fringes of Tarn Taran district in north-west Punjab, Patti is famous for its fruit orchards. Migrant labour arrive annually to take care of the pear and peach trees. Their job is to keep away birds who could descend at any time and peck or pluck the ripening fruit. Workers like Suraj Bahardar who guard these fruit orchards are called rakhes .

In this orchard there are nearly 144 pear trees spread across two acres of land. The 15-year-old is their sole guardian in the fruiting season that lasts from April to August and he is paid a monthly salary of Rs. 8,000 by the owners.

“As soon as the trees start flowering, the landlords give their orchards away on lease. The thekedars who take them on lease appoint rakhes, ” Suraj tells us. Most rakhes are migrant labour from Uttar Pradesh and Bihar. 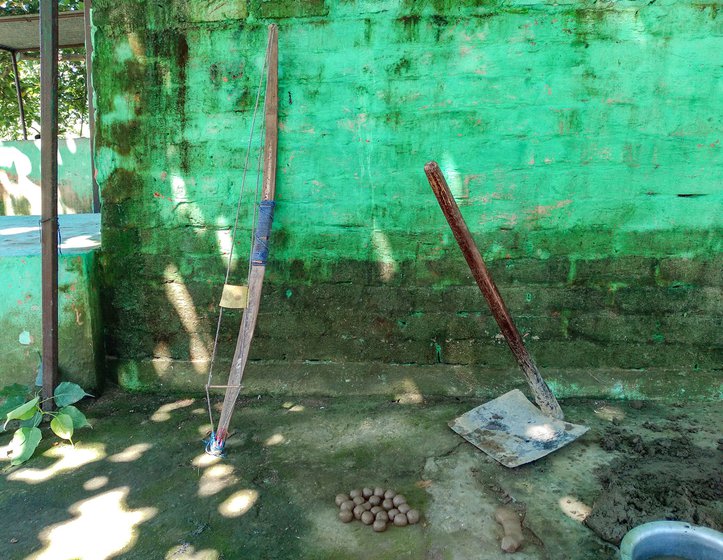 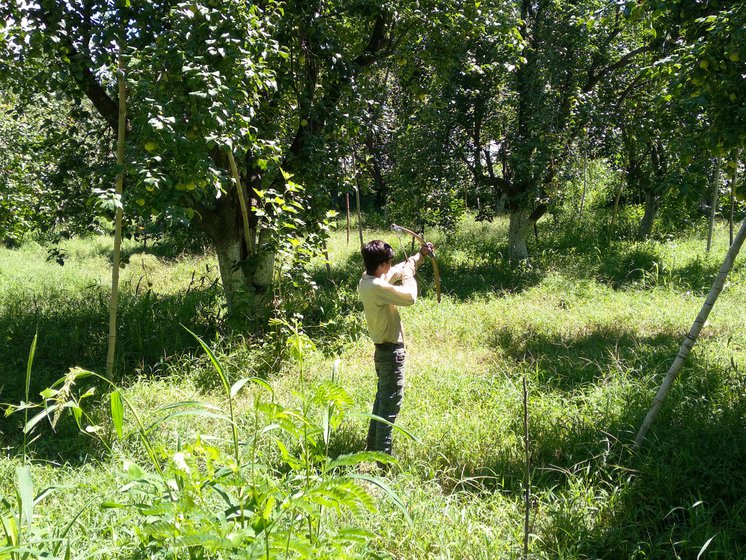 Left: A pile of rodas (pellets) made from wet clay and a kaman (bow) are the tools of the caretaker's trade. Right: Suraj is aiming with a kaman at birds in the orchard

Suraj is from Bihar and has travelled almost 2,000 kilometres to find work in the orchards. He is from village Bhagparwaha in Bihar’s Araria district. To get here he took a train from the nearby town of Saharsa, travelling across 1,732 kilometres to reach Amritsar in Punjab. The thekedars arranged for a bus to bring workers like him to Patti, an hour away.

Suraj belongs to the Bahardar community that is listed in Bihar as Extremely Backward Class (EBC). He was studying in Class 8 when his family’s deteriorating financial situation forced him to drop out of school. He says, “I didn’t have a choice. But once I go back home, I will return to school with my earnings.”

Situated in Punjab’s Majha Kshetra region, the town of Patti is nearly 22 km from the city of Tarn Taran; Lahore in Pakistan is an hour away. Most orchards in this area are owned by dominant caste communities like Jattas (Jat). Beside fruit groves they also own land on which they cultivate food crops.

Unlike orchards of pears and peaches, guava orchards need to employ rakhes twice a year. Sometimes locals are also hired to guard the trees or the thekedars employ migrant workers who have settled in the area.

Most workers who migrate from Bihar for this work are older than Suraj and it is unusual to see such a young boy working as a rakhe in an orchard. The teenager can be seen scaring away birds and at other times cooking, drying clothes and doing other household chores. Suraj said that owners also made him clean their homes and sent him on errands to buy groceries and other household items. “If I had known that I would be asked to do so much work in the name of taking care of the garden, I would never have gone,” he said on the phone after returning to Bihar. 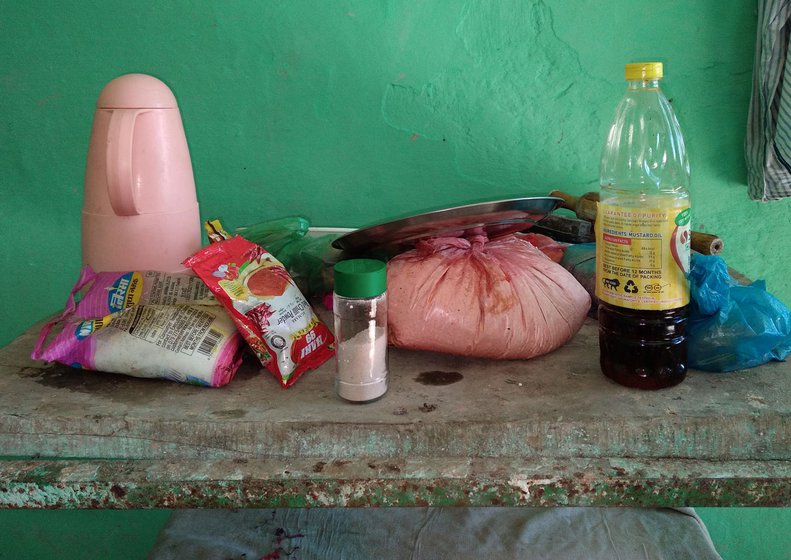 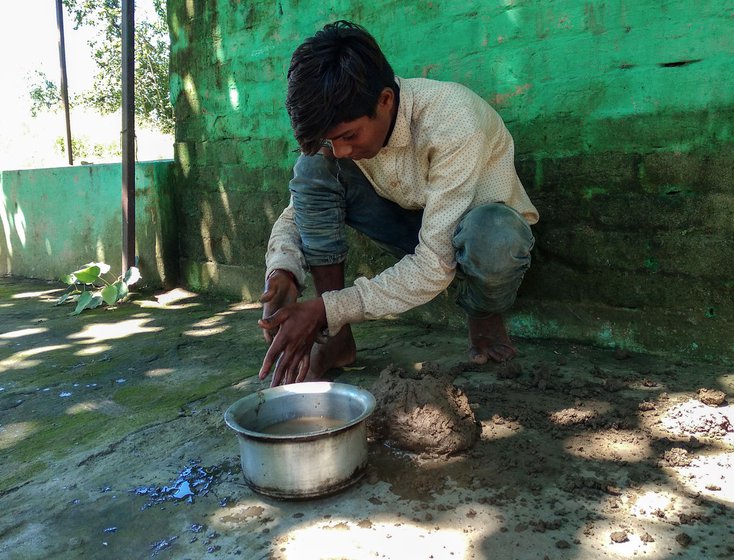 In Patti’s orchards, workers start their jobs when the flowers blossom in April and stay on till August when the fruits are picked. They spend the entire period of five months in the orchard with no pukka roof over their heads. They erect make-shift bamboo huts with tarpaulin roofs amidst the trees. The summer heat and monsoon humidity invites snakes – some of which are poisonous – and other creatures.


Suraj says, “Even the fear of such dangerous reptiles pales in front of the need to earn.” Opting out and returning home empty-handed is simply not an option.

Patti’s Shingara Singh has taken a three-acre guava orchard on lease, and both he and his wife Paramjit Kaur work as rakhes. Shingara, 49, is from the Mehra Sikh community and in Punjab they are listed as Backward Class (BC). They paid Rs. 1.1 lakh for a 2-year lease of the orchard. According to Shingara Singh, “I got the garden at a low rate because the owner had fixed the lease-amount based on the number of trees instead of the total area.”

Most people plant 55 to 56 guava trees per acre, he said, but in this case the entire garden had only 60 trees. Singh earns Rs. 50,000 to 55,000 from selling the fruits at a mandi . He said the returns are very low and so he cannot employ anyone else as a rakhe .

“This land is ours for the next two years. During the winter, in addition to guavas we grow vegetables in the open patches between the trees and sell them at the mandi, ” said Shingara. “In summer, our earnings are entirely dependent upon the fruit in our orchards.”

Referring to the challenges that come with guarding the garden, he said, “Among birds, it’s the parakeet which troubles us the most. Guavas are their favourite fruit! If they ate the entire fruit we wouldn’t mind at all. But they want only the seeds, the rest of the guava they bite off in pieces and discard.” 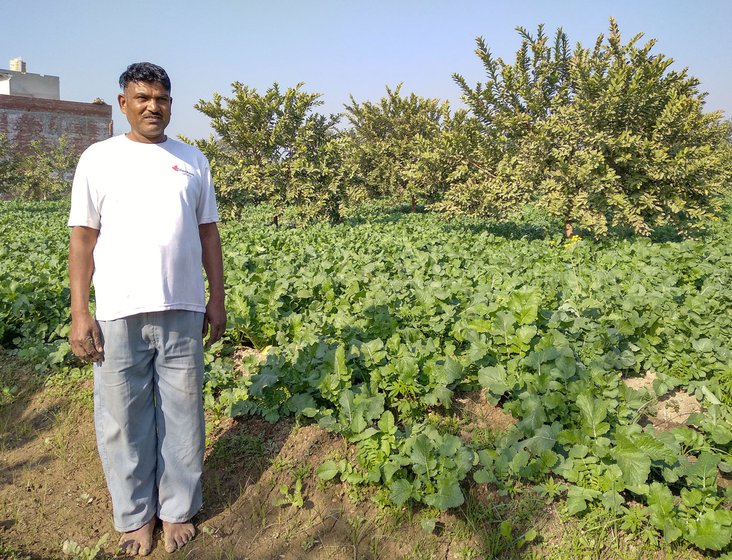 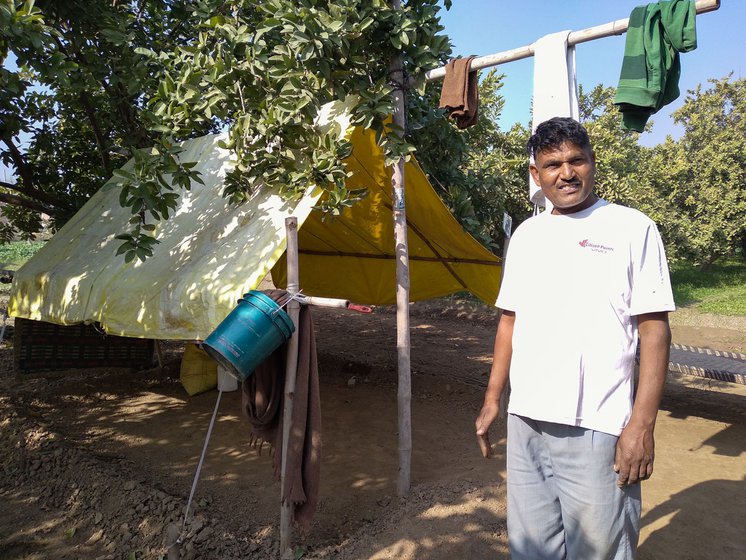 Left: Shingara Singh in his three-acre guava orchard in Patti. Along with fruits, turnip is also cultivated. A temporary camp (right) in the orchard

But even parakeets have villains among them as Singh points out, “Of the parakeets it’s the Alexandrine variety that does the greatest damage. If an entire flock lands in an orchard, you may as well write that orchard off.” In such cases, the caretakers are forced to rely on frightening hoots and gulels like the ones used by Suraj.

Migrant labour like Suraj are also paid less than what local workers would charge. “Workers from UP and Bihar agree to work for much lower wages, and then contractors can avoid the hassle of registering them,” points out Shingara.

According to Census 2011, Uttar Pradesh and Bihar saw the largest number of people migrating in search of work. Most of them are from communities that have been historically marginalised. They work as labourers in factories, farms, brick kilns and orchards and surprisingly, there is no state record of them. Trade unions and other organisations allied to labour simply lack the resources necessary to keep a detailed account.

Kanwaljit Singh, a social worker points out that, “Migrant workers face a two-fold crisis. The Inter-State Migrant Workers Act makes it mandatory to register these labourers along with their employers. Hardly anyone follows this law.” Singh is a member of the Communist Party of India’s (Marxist-Leninist) central committee. “As a result, no data is available about the migrant workers who come to work here. Consequently, they are often deprived of getting the benefits of welfare schemes meant for them,” he adds. 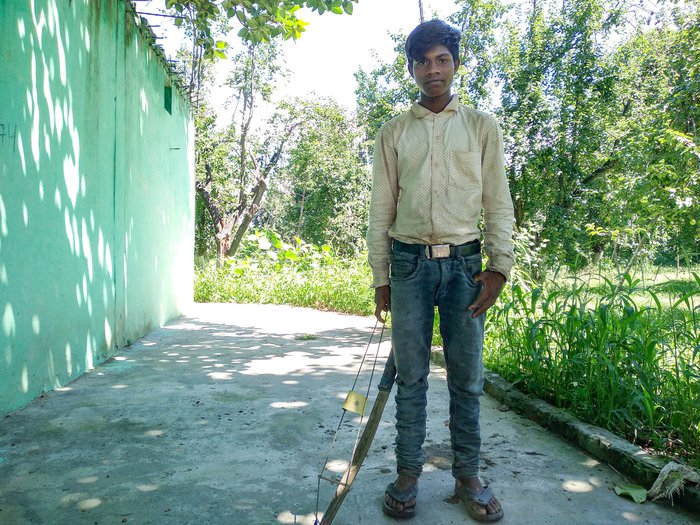 Suraj getting ready to scare birds away with a kaman. He was hoping he could earn enough from this job to get back into school

In this orchard there are nearly 144 pear trees spread across two acres of land. The 15-year-old Suraj, is their sole guardian in the fruiting season that lasts from April to August. He is paid a monthly salary of Rs. 8,000 by the owners

Back in Bihar, Suraj's father Aniruddha Bahardar assists the Patwari (headman) and is paid Rs. 12,000 a month – the only fixed source of income for the landless family home in Araria district’s Bhagparwaha village. According to Suraj, his father never wanted him to travel so far away to work but the family had no other option. “I heard one of my relatives say that one can get a lot of money out here,” adds Suraj. And that’s how he ended up coming to Punjab.

The family of six live in a kuccha house with khaprail (clay tiles) as roofing. His mother Surti Devi says, “In the monsoon the rainwater comes inside. All the huts in our village are made of mud walls, only a few have tin roofs.” The money Suraj earned in Punjab in 2022 has been spent on repairing the house, and not as he wanted to, on his education. “Looks like I have to come back to Punjab even if I don’t want to,” he said on the phone after returning home.

Surti Devi, 35, takes care of the household work and also works as a labourer when the needs arise. Suraj’s three younger brothers study in a government school – Neeraj is 13 years old and in Class 6, Bipin is 11 and in Class 4 and the youngest one, Ashish is 6 and in kindergarten. The family owns no land and have leased roughly 2.5 acres to farm, of which on 1.5 acres they have dug a pond to rear fish. On the remaining acre they cultivate paddy and vegetables. Whenever Suraj is at home, he takes some of the vegetables to sell at the mandi . The family can earn around Rs. 20,000 annually in this way, but it is not fixed.

Now home, Suraj is not sure what the future will bring. He may have to return to Punjab to earn again. His heart however, is set on an education: “Whenever I see other kids going to their school, I long to go too.”

Kamaljit Kaur is from Punjab and she is a freelance translator. Kamaljit has done her MA in Punjabi literature. She believes in a just and equitable world and works towards making it possible.

Devesh is a poet, journalist, filmmaker and translator. He is the Translations Editor, Hindi, at the People’s Archive of Rural India.

Other stories by Joshua Bodhinetra