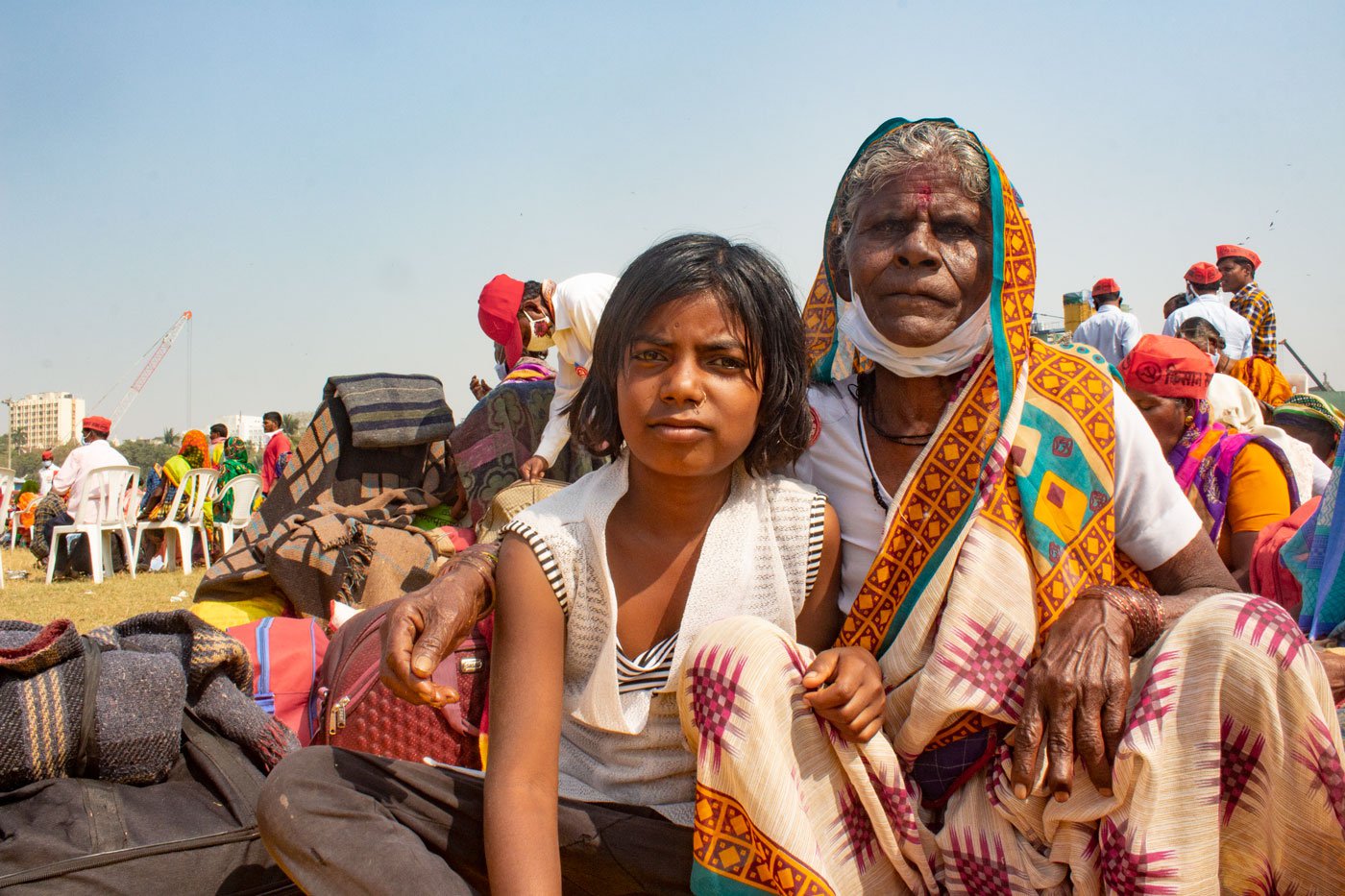 To help 10-year-old Nutan learn about Adivasi farmers' concerns at a young age, her grandmother Jijabai brought her along on the march from Nashik to Mumbai, protesting against the new farm laws

Nutan Brahmane, 10 years old, was curious about why her grandmother was going to Mumbai in a protest march. So Jijabai Brahmane decided to bring her along. “I brought her so she would understand the sorrows and problems of Adivasis,” said Jijabai, sitting under the blistering sun at Azad Maidan in south Mumbai on January 26.

“We are here to support the farmers protesting in Delhi [against the three farm laws]. But we want to draw attention to some of our local demands too,” said 65-year-old Jijabai, who stayed at Azad Maidan on January 25-26 along with Nutan.

They came here from Ambevani village in Nashik district with the group of farmers who left from Nashik on January 23.

For decades, Jijabai and her husband, 70-year old Shravan – they belong to the Koli Mahadev Adivasi community – cultivated five acres of forest land in their village in Dindori taluka . They should have received the title to the land after the Forest Rights Act was passed in 2006. “But we got less than an acre in our name, on which we grow paddy, wheat, urad and tur ,” she said. “The rest [of the land] is under the forest department, and the officials keep harassing us if we go near that plot.”

For the Republic Day protest in Mumbai, Nutan’s father, Jijabai’s son Sanjay, readily agreed to let his daughter go with her grandmother. “She wanted to come for the Kisan Long March in 2018, where we walked from Nashik to Mumbai over a week. But she was too young. I wasn’t sure if she would be able to make it. Today she is old enough and there was not much walking to do,” said Jijabai. 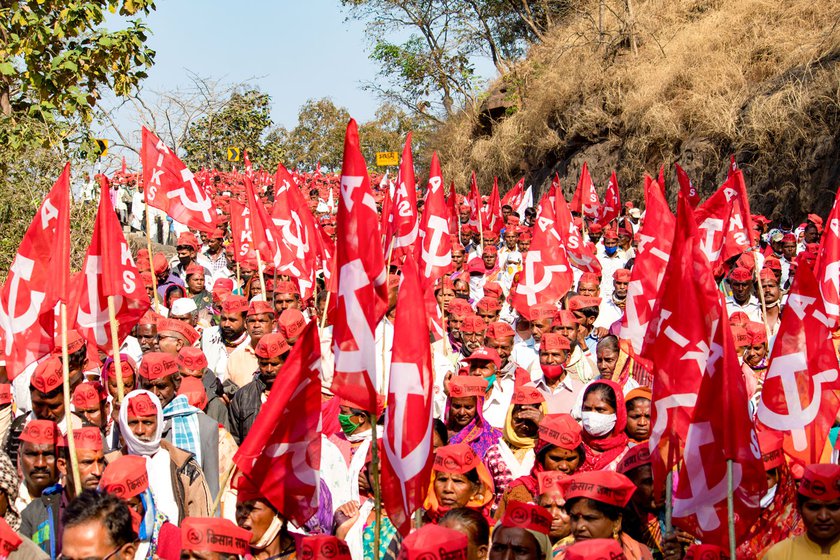 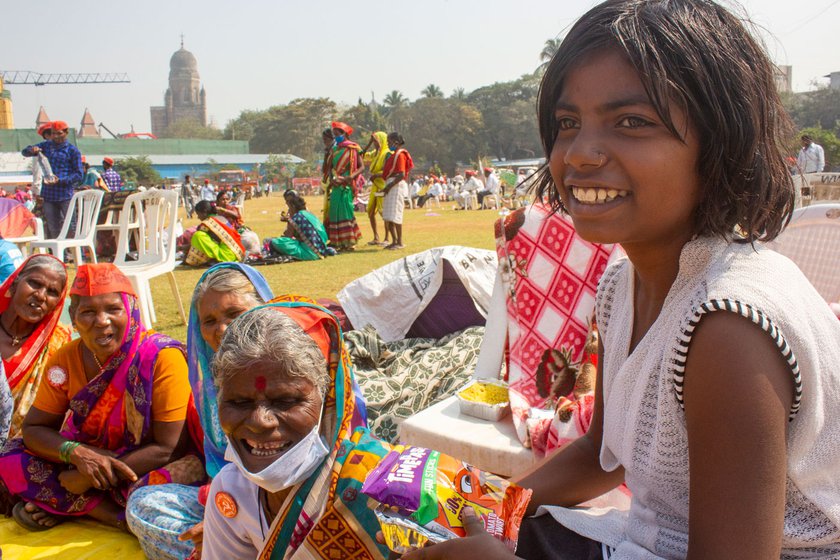 Left: The farmers from Nashik walked down Kasara ghat on the way to Mumbai. Right: Nutan Brahmane and Jijabai (with the mask) at Azad Maidan

Jijabai and Nutan travelled with the Nashik group in pick-up trucks and tempos – except for a 12-kilometre stretch of Kasara ghat where everyone got out of the vehicles and walked as a show of strength. “I also walked with my grandmother,” Nutan said, smiling shyly. “I did not get tired at all.” They covered a total distance of about 180 kilometres from Nashik to reach Azad Maidan.

“She did not cry even once or throw tantrums. In fact, she got even more energetic after reaching Mumbai,” said Jijabai, caressing Nutan’s forehead with pride. “We had carried bhakri and green-chilli chutney for the journey. They were just about enough for the two of us,” she added.

Nutan’s school in Ambevani has been shut because of the Covid-19 pandemic. The family does not have a smartphone, so online classes were not possible. “I thought this would be a good learning experience for Nutan,” said Jijabai.

“I wanted to know how big it is,” said Nutan, who is in Class 5 and had always wanted to visit Mumbai. “I will go back and tell my friends all about it.”

Nutan now knows that her grandmother has been demanding land rights for years. She also knows that her parents, who work as agricultural labourers, do not have enough work in their village. She is learning about the three farm laws passed by the Modi government in September 2020, against which farmers are protesting all over the country. 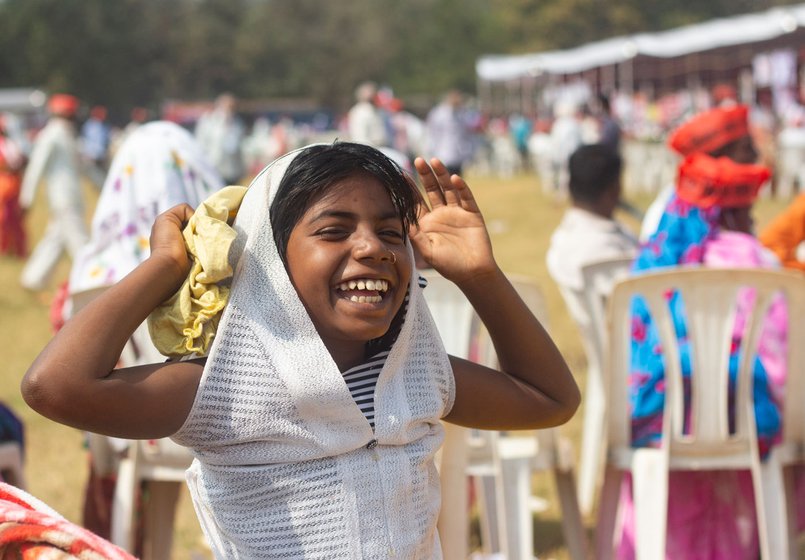 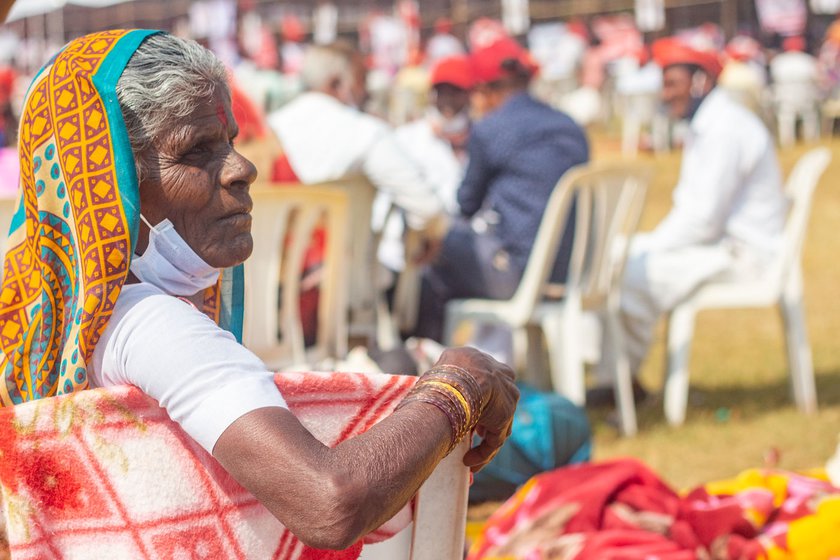 Nutan (left) had always wanted to see Mumbai. Jijabai (right) bring her along to the protest "so she would understand the sorrows and problems of Adivasis"

The three laws are: The Farmers’ Produce Trade and Commerce (Promotion and Facilitation) Act, 2020 ; The Farmers (Empowerment and Protection) Agreement on Price Assurance and Farm Services Act, 2020 ; and The Essential Commodities (Amendment) Act, 2020 . They were first passed as ordinances on June 5, 2020, then introduced as farm bills in Parliament on September 14 and hastened into Acts by the present government on the 20th of that month.

The farmers see these laws as devastating to their livelihoods because they will expand the space for large corporates to have even greater power over farmers and farming. “We don’t want more large companies in agriculture. They don’t have our interests in mind,” said Jijabai.

The new laws also undermine the main forms of support to the cultivator, including the minimum support price (MSP), the agricultural produce marketing committees (APMC), state procurement and more. They have also been criticised as affecting every Indian as they disable the right to legal recourse of all citizens, undermining Article 32 of the Indian Constitution.

Farmers must take to the streets to express their disagreement with the anti-farmer policies, said Jijabai. “Especially women,” she added, referring to Chief Justice of India Sharad Bobde’s query, ‘Why are old people and women kept at the protests?’

“I have spent my life toiling in farmlands,” said Jijabai. “And I have worked as much as my husband has.”

She was happy when Nutan asked her if she could come to Mumbai. “It is important for her to understand these things at a young age. I wish to make her an independent woman.”