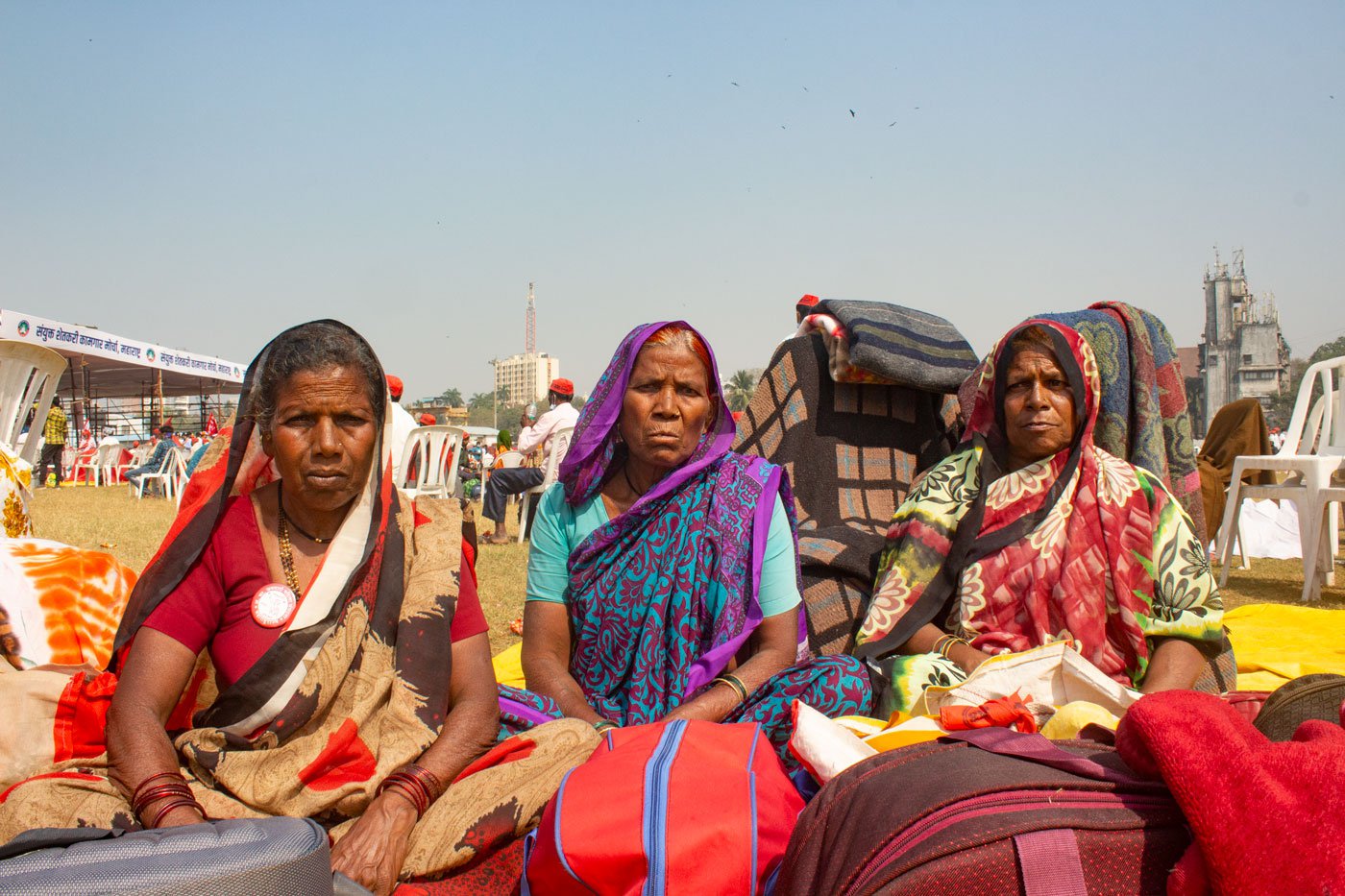 ‘We still don’t own the land we cultivate’

Despite land rights being the main concern for Bhima Tandale, Suman Bombale and Lakshmi Gaikwad – Adivasi farm widows from Nashik – they are in Mumbai to support the protest against the new farm laws

“My son died about four years ago. A year after that, my husband died too,” says 70-year-old Bhima Tandale. Sitting under the hot sun at Azad Maidan in south Mumbai, she speaks of the sorrow of these two devastating losses within the span of a year.  Her husband as well as her son had both collapsed while working on their farm.

Bhima’s son, Dattu, was only 30 when he died, and her husband, Uttam, was in his mid-60s. “Since then, I have been managing the household with Sangita, my daughter-in-law,” says Bhima, who also works as a farm labourer. “My grandson, Sumit, is 14. We have to look after him.”

But Bhima has still made it to Mumbai to participate in the protest on January 25-26 against the three new farm laws. The protest has been organised by the Samyukta Shetkari Kamgar Morcha to express solidarity with the protesting farmers at Delhi’s borders. Farmers from 21 districts of Maharashtra, assembled together by the All India Kisan Sabha have come to Mumbai for this.

Bhima is among 12-15 women from her village, Ambevani, in Nashik district’s Dindori taluka , who left on the morning of January 23 and reached Mumbai the next day. Three of them are farm widows.

Suman Bombale’s husband passed away a decade ago. “He died due to exhaustion and stress,” says Suman, whose husband, Motiram, was 50 then. “We have been tilling five acres of forest land for years. But it is still not in our name. The forest officials keep harassing us. My husband would always be stressed about this.” Like Uttam, Motiram too collapsed when he was working on the farmland. 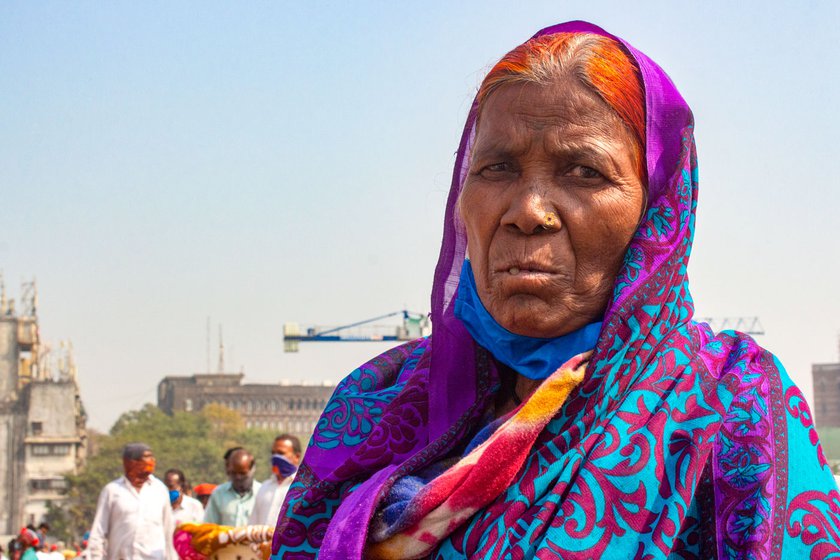 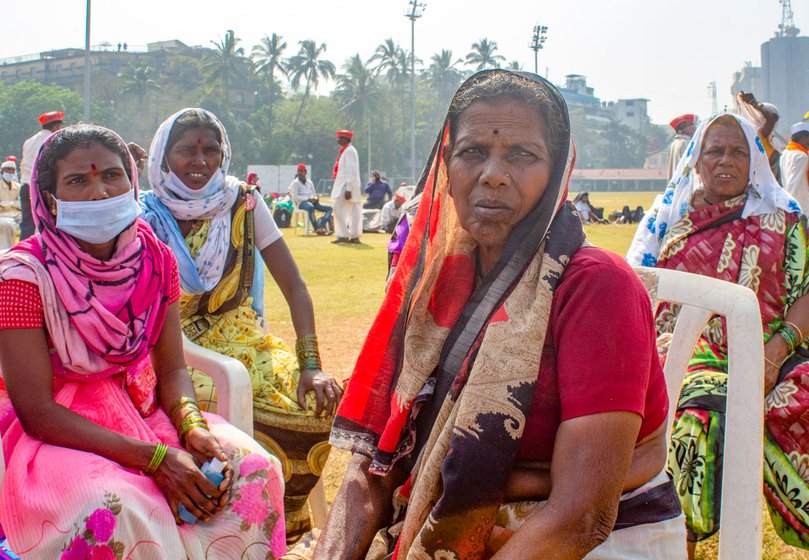 On that land, says 60-year-old Suman, “I cultivate soyabean, bajra and tur . But that is only during monsoons because water is not available for the rest of the year. There is no electricity either.” She also works as an agricultural labourer for a daily wage of Rs. 150–200. “One of our demands is to generate more work under MGNREGA so that we can have a regular income,” she says.

By being away for at least four days to participate in the Mumbai protest, Suman has lost out on Rs. 600-800 in daily wages. “What option do we have?” she asks. “We have to keep fighting for our rights. The talathi in our village keeps saying he will get my land title done, but nothing has happened so far. I don’t own even an acre of farmland. I don’t have children. I can only do so much. I am all alone.”

But Lakshmi Gaikwad, 65, does own an acre of land – even though she is entitled to much more, she says. “We had been cultivating on five acres, but the forest department built check dams where we farm. We lost two acres because of that. And when they gave me the land title, I only got an acre.”

Lakshmi’s husband, Hiraman, died about 12 years ago at the age of 55. He felt uneasiness while clearing out stones from their farmland, and became unconscious. “He never got up,” she says. But with two sons who are 32 and 27 years old, Lakshmi has had support in following up with the authorities for the family’s land rights.

Lakshmi, Suman and Bhima belong to the Koli Mahadev Adivasi community. They have been demanding rights to their land ever since the Forest Rights Act was passed in 2006. They believe that the poor implementation of the Act contributed to the death of their husbands.

Their demand for land titles is their main concern, but they have come to Mumbai to also express solidarity with the farmers protesting against the three new farm laws in and around Delhi. They foresee that the laws will affect all farmers in India over time. 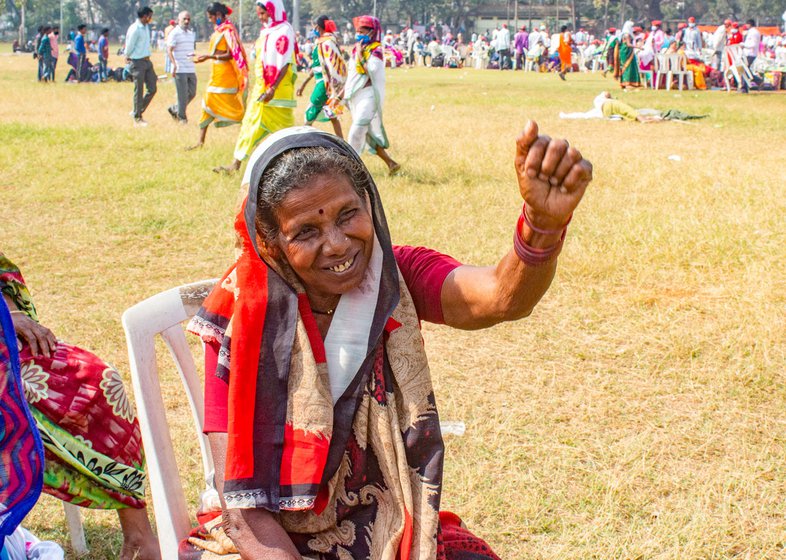 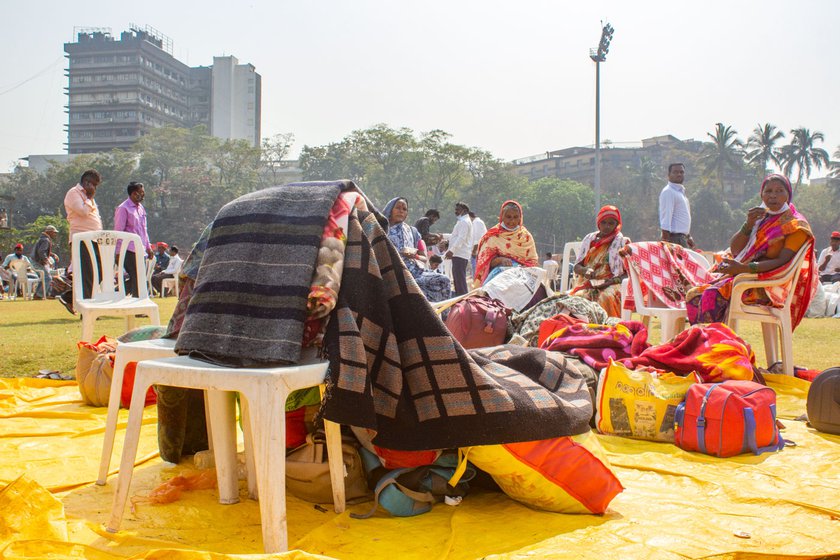 They have carried with them bhakri and chutney to eat, and a blanket to see them through the nights under the open sky in Azad Maidan. “The government needs to know that farmers in all parts of India are protesting against these laws,” says Bhima, braving the heat of the ground barefoot.

The laws that the farmers are protesting against are: The Farmers’ Produce Trade and Commerce (Promotion and Facilitation) Act, 2020 ; The Farmers (Empowerment and Protection) Agreement on Price Assurance and Farm Services Act, 2020 ; and The Essential Commodities (Amendment) Act, 2020 . They were first passed as ordinances on June 5, 2020, then introduced as farm bills in Parliament on September 14 and hastened into Acts by the present government on the 20th of that month.

The farmers see these laws as devastating to their livelihoods because they will expand the space for large corporates to have even greater power over farmers and farming. They also undermine the main forms of support to the cultivator, including the minimum support price (MSP), the agricultural produce marketing committees (APMC), state procurement and more. The laws have also been criticised as affecting every Indian as they disable the right to legal recourse of all citizens, undermining Article 32 of the Indian Constitution.

Farmers from Punjab and Haryana are out in large numbers at the ongoing protests around Delhi because the two states are the highest producers of rice and wheat procured by the state government agencies at MSP.

But the Maharashtra farmers gathered at Azad Maidan point out that the protest is about the larger farming community too. “It [the laws] may not affect us immediately,” says Lakshmi. “But if it hurts the farmers of the country, it will affect us sooner or later. All of us work as farm labourers. If farmers are unable to employ us, from where will we earn money? The Modi government should withdraw the three farm laws. We don’t trust large companies to treat us fairly.”

If the government really wanted to improve the condition of farmers and not favour private companies, it would not have been so difficult for Adivasi farmers to get land titles, says Suman. “We walked from Nashik to Mumbai for a week in 2018. Some of us even went to Delhi,” she adds. “Our people have worked on the land and even died on it, but we still don’t own the land we cultivate.”
#new-farm-laws #Republic-Day #Azad-Maidan #Nashik-jatha #farm-widows #land-titles #Forest-Rights-Act #MSP #Adivasi-farmers
Reporter : Parth M.N.
@parthpunter