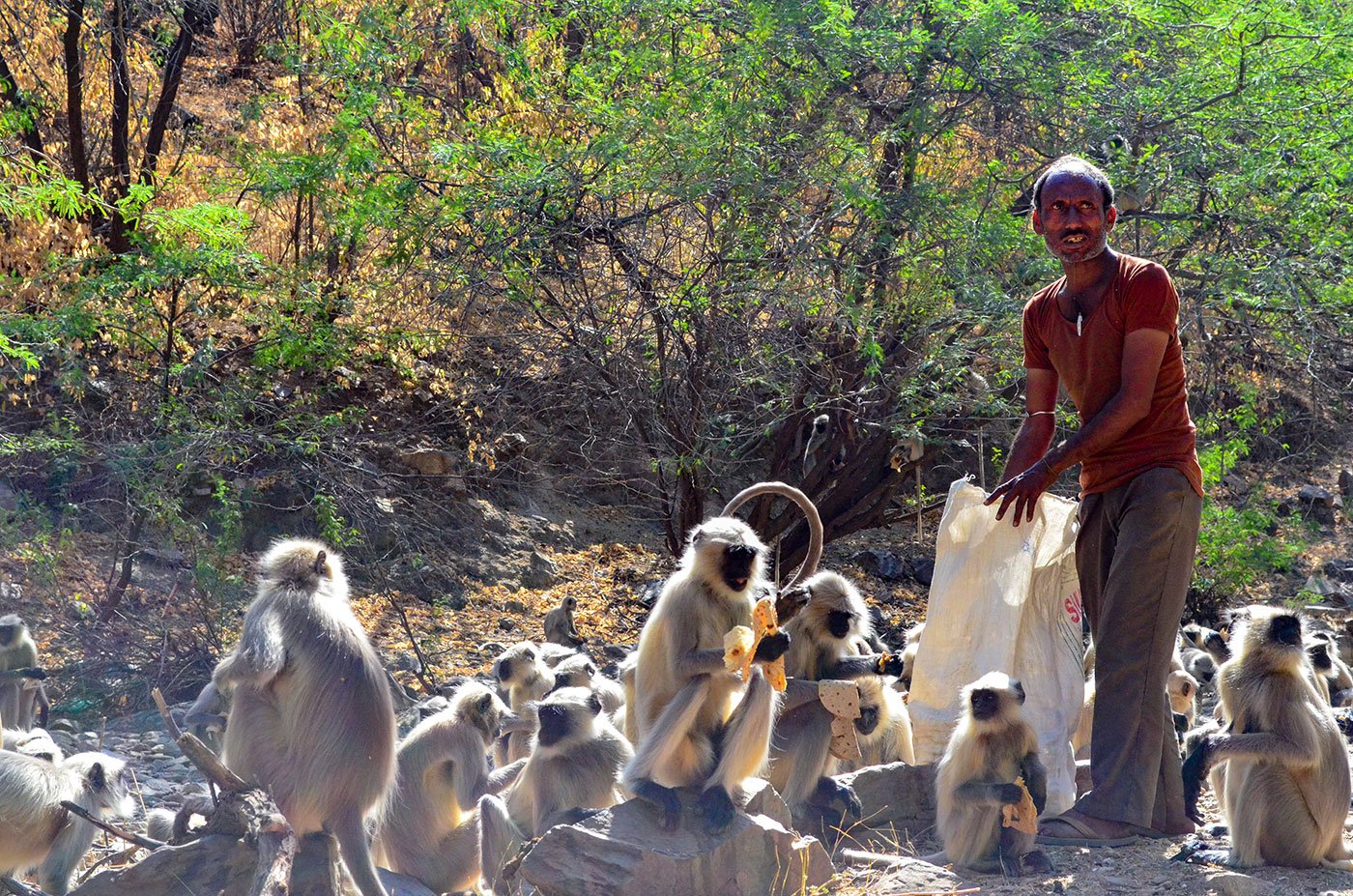 In Sheoganj, monkey business is a great service

In Rajasthan’s Sirohi district, Jhujaram Sant is employed by a local group to collect leftovers from households and feed hungry langurs in the nearby forest, especially in the summer months when food is scarce

Jhujaram Dharmiji Sant chants this as he cycles through the alleys of Sheoganj town in Rajasthan’s Sirohi district. “People always give away leftovers such as rotis , and both raw and cooked vegetables quite readily,” he remarks. “And by the time I collect [food from] about six to seven alleys, I manage to fill up a sack.” He uses a plastic sack which packs in 15 to 20 kilos.

For eight months each year, Jhujaram gets busy from 8.30 every morning collecting meals for the monkeys. Once the sack is full, he switches from the cycle to his moped for the eight-kilometre journey to Gankeshwar Mahadev Mandir, a small temple surrounded by hills, southeast of Palri village in Sirohi tehsil , off national highway 62.

He reaches the temple by about 11 a.m. and shouts “ aao, aao ” ("come, come") calling the monkeys. As if by magic, 200 to 300 langurs ( Semnopithecus priam ) appear immediately, all staring at him, waiting for the treat like well-mannered children. But the manners vanish as he flings the rotis into the air. The animals quickly rush around and gobble up everything they can grab even as more langurs swiftly join in. Jhujaram estimates he feeds all the 700 monkeys he says there are in this forest, in half an hour. “They like potatoes, biscuits, bottlegourd and carrots in the summer, roti and even chickoo, ” he says.

Others who try feeding them are met with an aggressive scowl, he says. “They are terrified of outsiders – they’ve often had people throwing stones and hurting them. It’s sad that people hurt them, why they do that?” he asks. 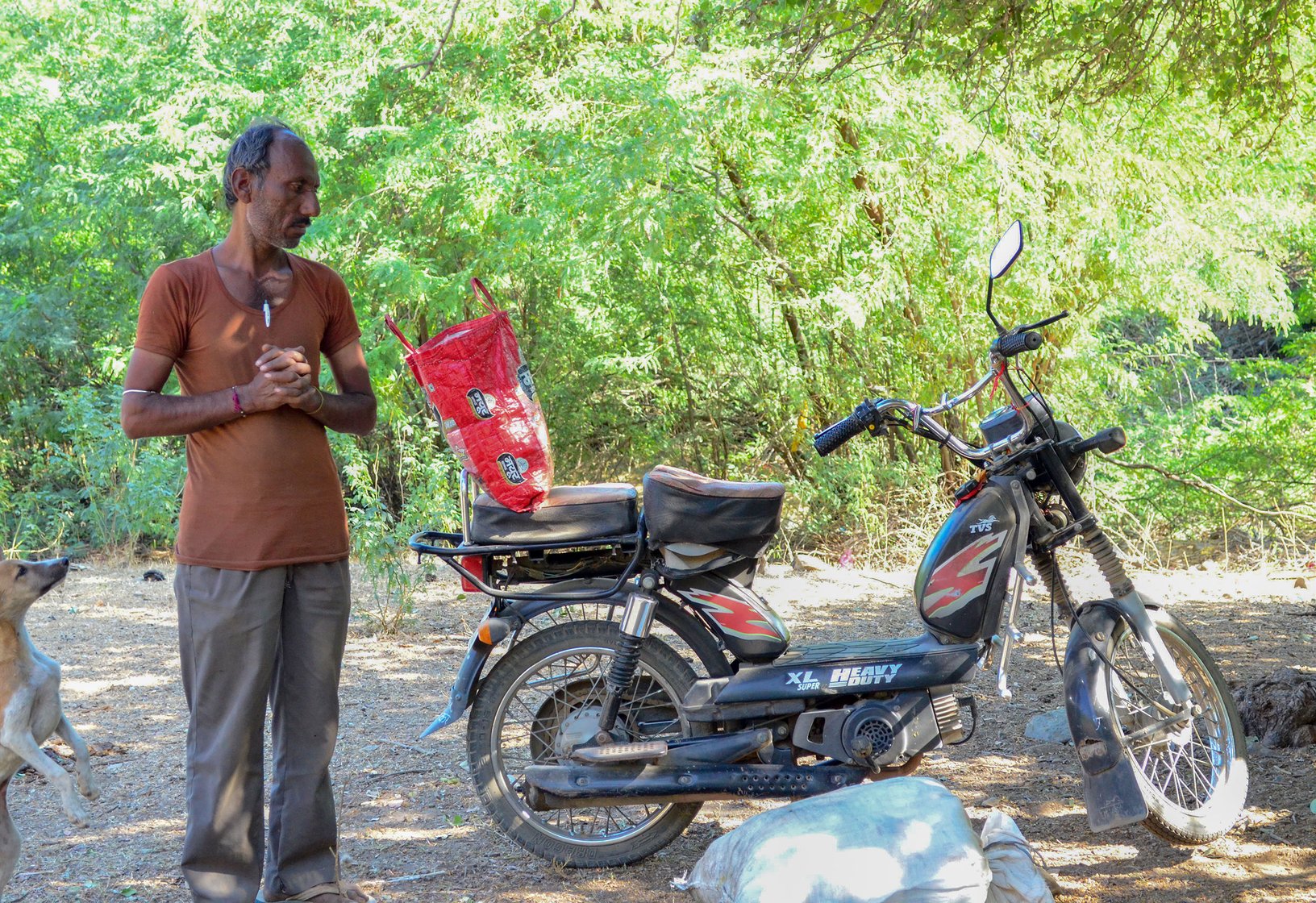 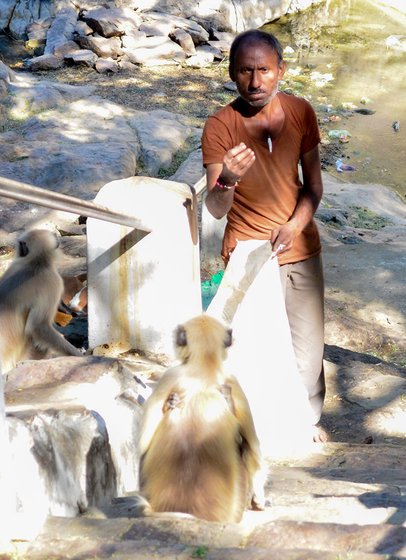 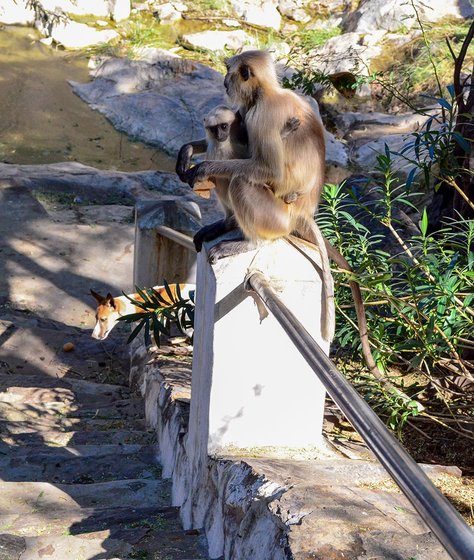 Left: Jhujaram giving food to the langurs . Right: A mother langur with her baby eating the rotis given by Jhujaram

Jhujaram sees the monkeys as a form of the Hindu god Hanuman and he sees his work as seva (duty). “The monkeys always come because this work has been happening for years and they are accustomed to it. If for some reason I’m not able to do this for a couple of days, then it takes them longer to come out,” he says.

Born in Andore village, near Paladi panchayat in Sirohi district and now in his early 40s, Jhujaram has been doing this job for five years. He is paid Rs. 4,000 a month by the Hanuman Seva Sangh, a local Sheoganj group. “I do get money, but I do this out of love and not as a labourer. The money isn’t credited to my bank account, but to an account with the one sitting on top, the maalik (god). This work is all about punya [virtuous deeds]. Their [the monkeys’] blessings are immense. By caring for them, even the maalik will listen to them and bless me.”

Jhujaram belongs to the Rebari tribe (recorded in Rajasthan as an OBC, Other Backward Class) and he is a singer too. His family sings bhajans at ceremonies. He has two sons; one works at a local cloth store and the other is studying in Class 5. His wife is an intermittent labourer who also looks after their home and Jhujaram’s mother, who lives with them.

In the four months that Jhujaram isn’t feeding the monkeys, he sometimes finds work as a construction labourer, or sells ice-cream on the streets of Sheoganj. “From this I earn Rs. 1,000 to Rs. 2,000 a month, and sometimes nothing and my son (who works in the cloth store) earns about Rs. 4,000. If there is some shortage, Bholenath (the Hindu god, Shiva) will look after that,” he adds. 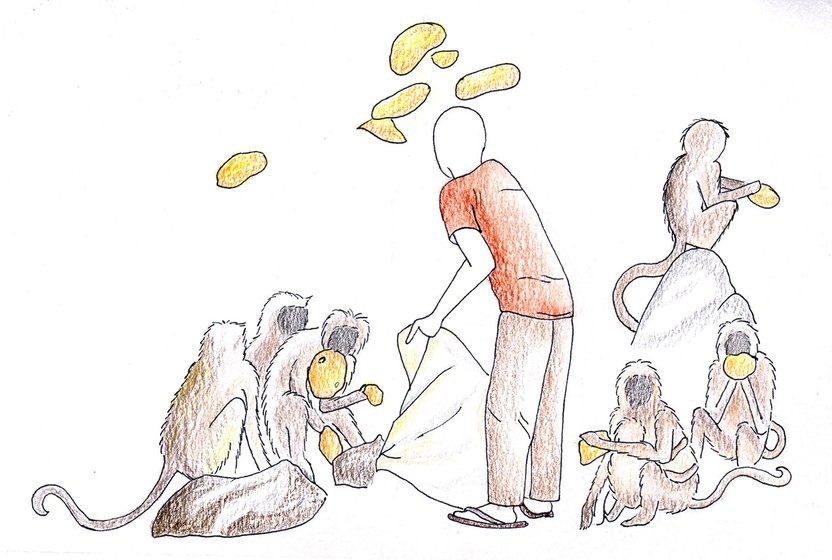 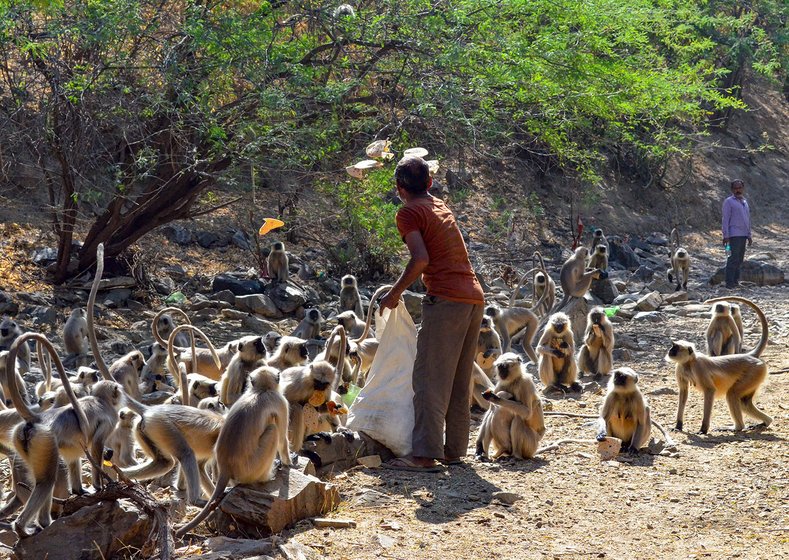 'Their [the monkeys’] blessings are immense'


To help Jhujaram in the peak summer months when the load is greater, another man, also appointed by the Hanuman Seva Sangh, joins him in feeding the monkeys. After the monsoon, they both stop this work for a while. “There is plenty of food readily available in the forest [for the monkeys] after the rains. Last year’s monsoons were very good, this place was green,” he recalls.

“But in summer when there is no water, all the tukudis [troops – groups of monkeys] come here. There are five tukudis, and in the winters three of them come to eat here. And the rest go above that hill over there,” he says, pointing to a range. “And beyond the temple are villages, so they go there. In the winters, many of the monkeys descend on the villages where they can find plenty to eat including, sometimes, standing crop.

“During the summers, I try and bring more food as there isn’t much around for them to eat. Also the days are longer in summer and the mornings aren’t very cold, so I manage to collect more food as I have more time,” he points out. “They don’t eat this babool [ Acacia nilotica ] itself as it is inedible, but sometimes they do eat the papdi [bean-like pods of the babool ]. In winter it’s the season of bore [jujube fruit], so they eat that as well.”

Jhujaram tells us that he began feeding the primates a little over five years ago. “Before that I was working at a shop, while another man was feeding them here, every day. This providing for the monkeys has been on for about 50 years now. People keep changing but the work never stops.”

When asked who comes in his place if he is unable to work on some days, he says: “No one! Other people don’t want to do this work as they are scared of these monkeys hurting them. The animals also will not trust new people. See – you all [school children] came and they immediately retreated.” 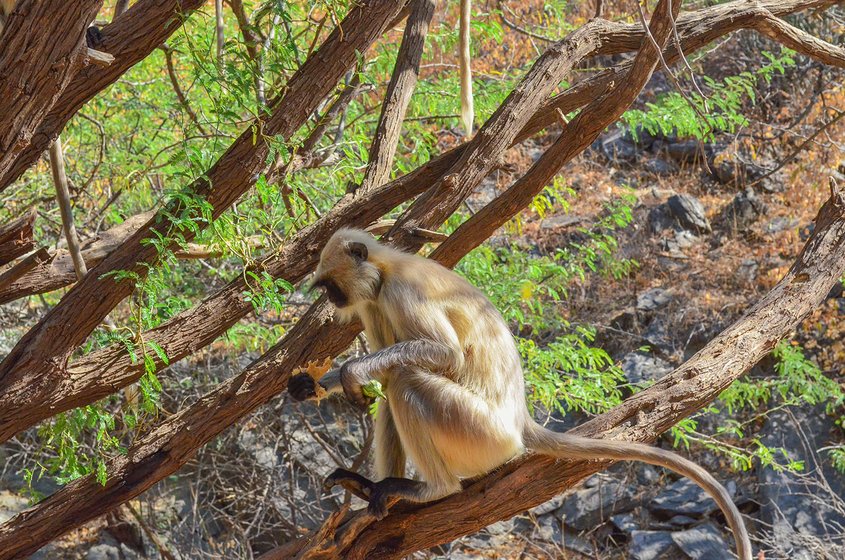 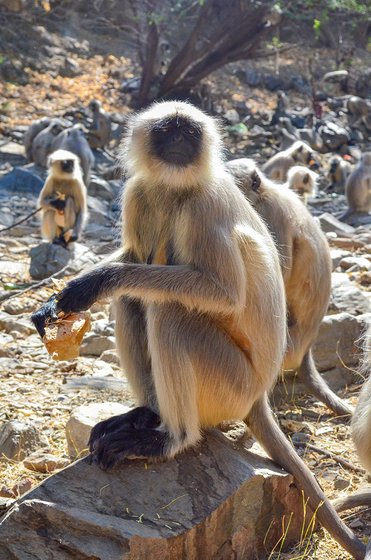 'Be it children or adults, I tell them give rotis or don’t give if you don’t want to, but please don’t hurt them or irritate them'

Jhujaram explains that he used to work in a kirana (general goods) shop when one summer his boss told him that a man was needed for feeding the monkeys or they would die hungry and their souls would be disturbed. He said to me: “you’ll still be employed here but first please do the work of feeding those monkeys.” So for the next four years, Jhujaram did that and continued working at the shop until another man was found and he could stop being the simian feeder.

After working at the shop for 15 years, Jhujaram quit about two years ago, following a disagreement with his boss. And when summer came around and another man was needed to feed the monkeys, he stepped in and has been doing it again since then.

“In the cities, I have heard, people cut trees and hurt animals. I’m sure you’ve heard of people throwing stones at monkeys too. So what do you do?” he asks us. “Be it children or adults, I tell them give rotis [food] or don’t give if you don’t want to, but please don’t hurt them or irritate them. Look after the animals and birds around you; we don’t have the right to hurt other creatures.”

Jhujaram says that he did think of migrating out of Sheoganj once, and he wants his children to go. “They must decide whether to go or not. I’m sure I don’t want to go to the city. I have found my work and this seva .”

We asked Jhujaram’s son, 19-year-old Dinesh Kumar (who works in the cloth store) if he would ever take over his father’s role: “This is saintly work,” he says. "If it is written in my fate, I too will do it.”

The reporter would like to thank Jhujaram Dharmiji Sant for his time, patience and enthusiasm in narrating his story. I also want to thank my teacher, Ganesh Venkatraman, for his guidance.

Sidh Kavedia is a Class 10 student of Shibumi School, Bengaluru.

Other stories by Sidh Kavedia