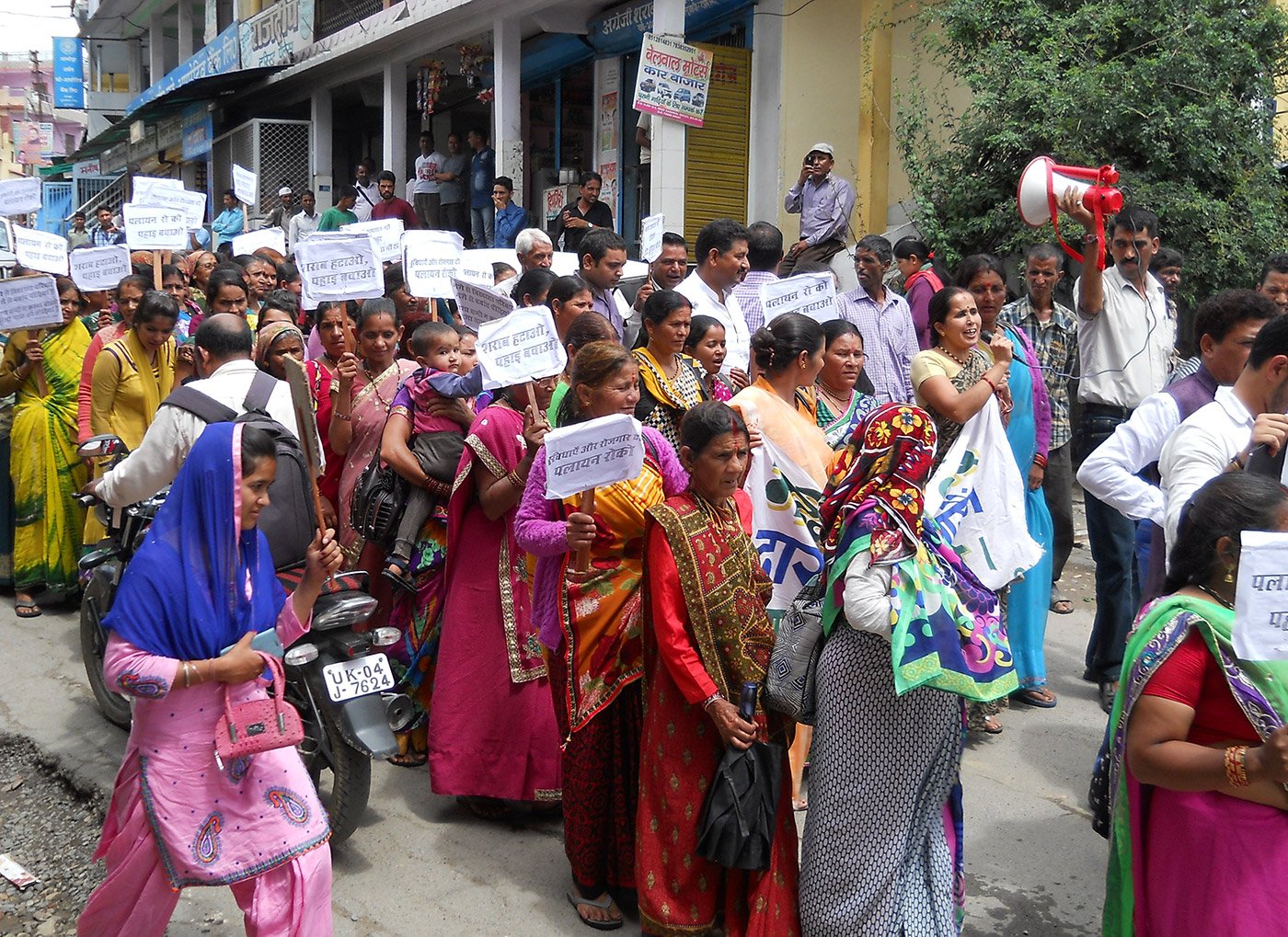 Why monkeys might tilt the poll outcome in Almora

Amid the barren fields and empty villages of Uttarakhand, Nandi Devi and Puran Lal of Jal Dhaular village, like many others, are not hopeful about the election results

Monkeys could well decide the outcome of the February 15 Assembly polls in the hill districts of Uttarakhand.  The results will be out tomorrow, March 11.

“The persistent monkey menace has ruined our lives, but political parties just ask for votes. If we don’t vote, they tell us, ‘You didn’t vote, so you can’t complain’,” says Puran Lal Singh.

And so, on a bright February morning in Jal Dhaular village of Someshwar block  in Almora district, when the loud election morchas of the Congress and the Bharatiya Janata Party followed in quick succession barely half-a-kilometre away, the noise  had no impact on Puran Lal and his wife Nandi Devi. Both continued to work.

Nandi Devi and Puran Lal of  Jal Dhaular village, Someshwar block, Almora district, lost most of their mustard and wheat crop, and are now trying to grow potatoes

Last November, the couple, in their 50s, had sown wheat and mustard on their three acres. But before the March-April harvest could begin, gangs of monkeys arrived and destroyed most of the crop. “Only a few plants were left, and those weren’t enough for growing mustard greens,” says Nandi Devi, clearly upset. She and her husband are now preparing the land for sowing potatoes. “At least we will get something to eat…” she says.

Two rivers, the Koshi and Sai, flow by the Someshwar valley. The land here is  fertile, but irrigation and pumping systems are inadequate. To add to that, monkeys – and even wild boars – have devoured the hills’ agriculture. The people in the villages say that around a decade ago, the monkeys were not such a problem – a few would swoop in once in a while. But, they say, their number has  multiplied hugely because the forest department releases monkeys caught in the towns of Uttarakhand into the forests of the hill districts. The state has only one overstretched monkey sterilisation facility – started in 2015 at the Chidiyapur Rescue Centre – in Haridwar forest division. Meanwhile, the growing population of the monkeys transported to Almora and other hill districts means the animals don’t have enough to eat – so they raid the crops in the villages. 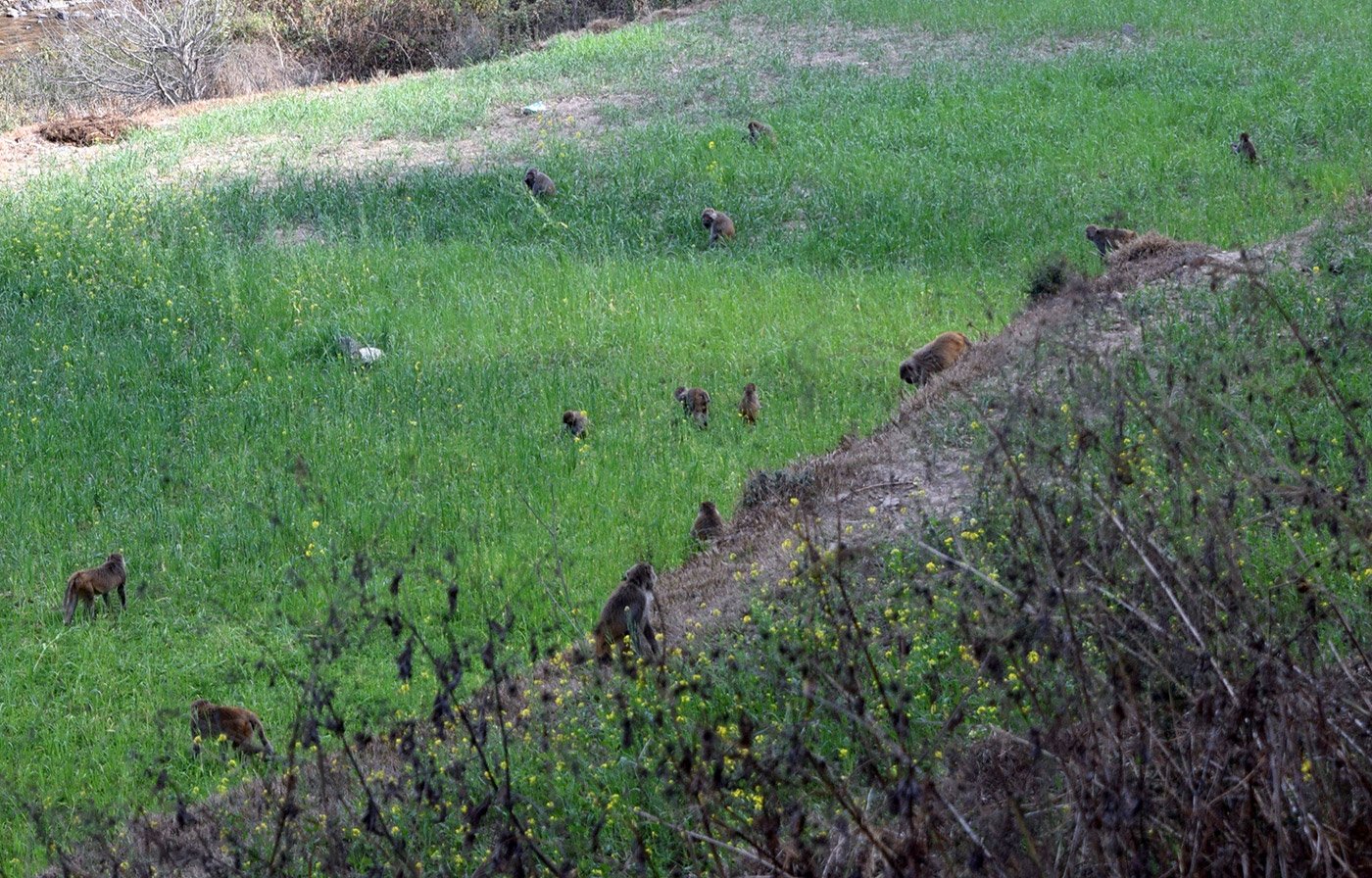 Hit by the hungry creatures as well as inadequate irrigation, hundreds of acres across Someshwar valley now lie barren. It’s the same in many other parts of Uttarakhand. Besides the problems of agriculture, a lack of employment options in the hills, sparse schools and poor medical facilities have forced many to migrate towards the plains or out of the state.

So while the population of monkeys in the state is growing, Uttarakhand’s villages are slowly emptying out. According to Census 2011, 105 villages in Almora have no residents at all, and neither do 331 villages in Pauri Garhwal district. Overall, the Census records that 1,053 of the state’s 16,793 villages are completely uninhabited, while 405 villages have a population of less than 10.

A locked house and barren land in Someshwar: entire villages in Uttarakhand have emptied out

Numerous Kumaoni-style houses with ornate wooden carvings are locked up across the state. Roofs have caved in and weeds have taken over. The owners have left for cities like Haldwani, Dehradun and Delhi – for good.  In many blocks of Almora district, there are now more women than men – they, along with elders and children, continue to live in the desolate villages while the men in their families work in the towns and cities and send money home every month.

The locked houses in Baburiya Nayal in Bhasiya Chana block of Almora district speak of the hardship and hopelessness. There’s no road to the village because it’s located inside the Binsar Wildlife Sanctuary, although there are roads leading to hotels within the sanctuary. Reaching the village involves a steep climb of eight kilometres. The government primary school here has only two students in Class 4. They are also the only kids in the village. Census 2011 had recorded 130 people in Baburiya Nayal, but the number has fallen to 60, estimates Champa Bisht, a teacher at the school. 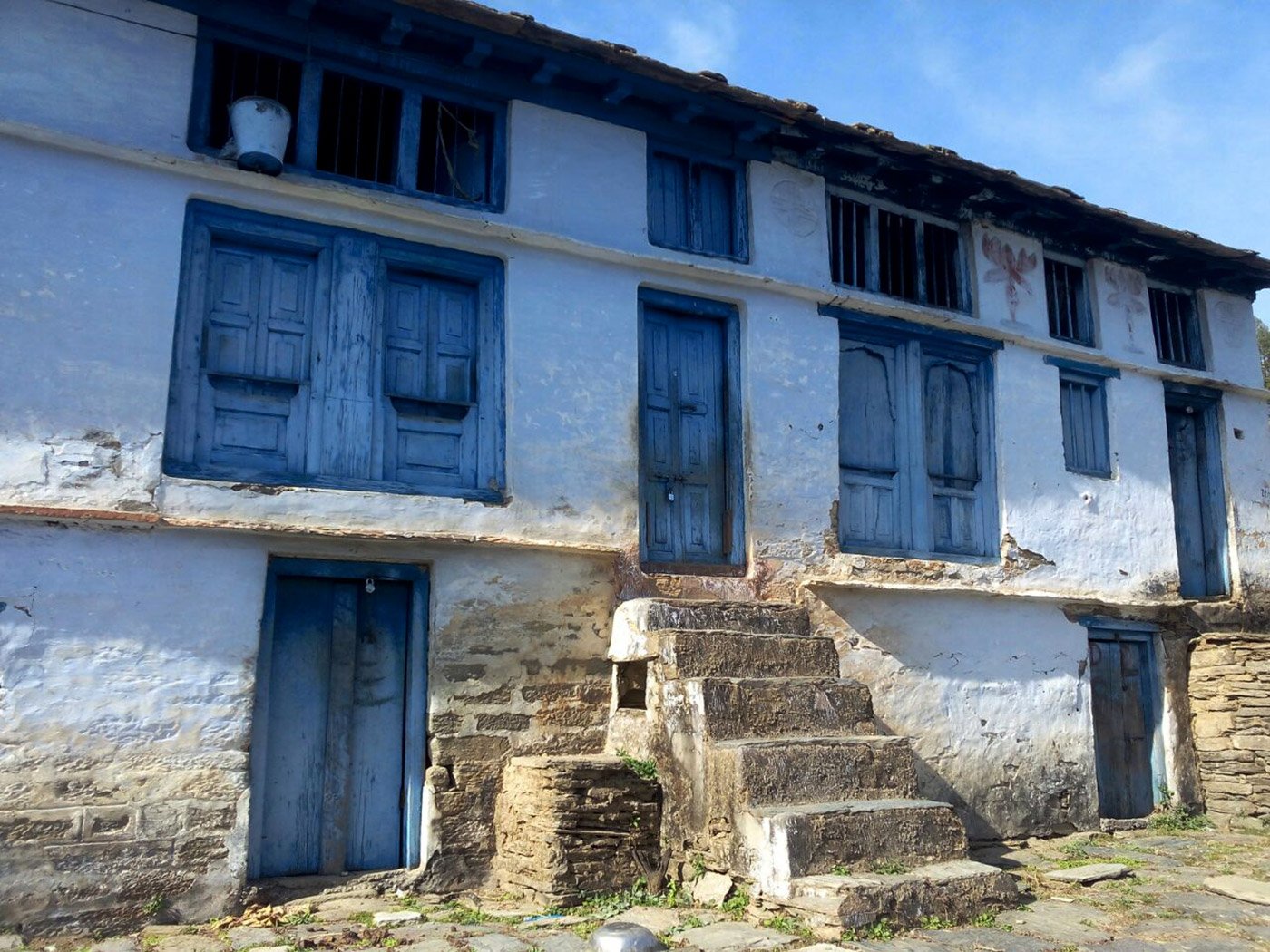 The locked houses in Baburiya Nayal speak of the hardship and hopelessness: the school teacher here estimates only 60 people still live in this village, which boycotted the February 15 polls

Baburiya Nayal boycotted the Assembly election on February 15. “What good is an election if the government is of no help to us?” asks Pooja Mehra, an anganwadi worker in the village.

Sometime before the elections, the women of Almora got together to complain about the monkeys and demanded that political parties and governments protect their crops.  The Mahila Ekta Parishad, a platform of 4,000 women across 80 villages in Almora, campaigned door-to-door for two months asking women to vote for candidates who address these concerns.

The group also insisted on affidavits from candidates promising to protect their crops from wild animals. Only one, Pushpesh Tripathi of the Uttarakhand Kranti Dal in Dwarahat constituency, gave an affidavit and assured the group that he would address this problem.

“The human-animal conflict is a social issue, but we want to make it a political issue. These are real problems when monkeys at daytime and wild boars at night are eating up our crops. It’s the women who suffer, because in villages men have migrated and women are left behind to look after agriculture,” says Madhubala Kandpal, the chairperson of the Parishad. 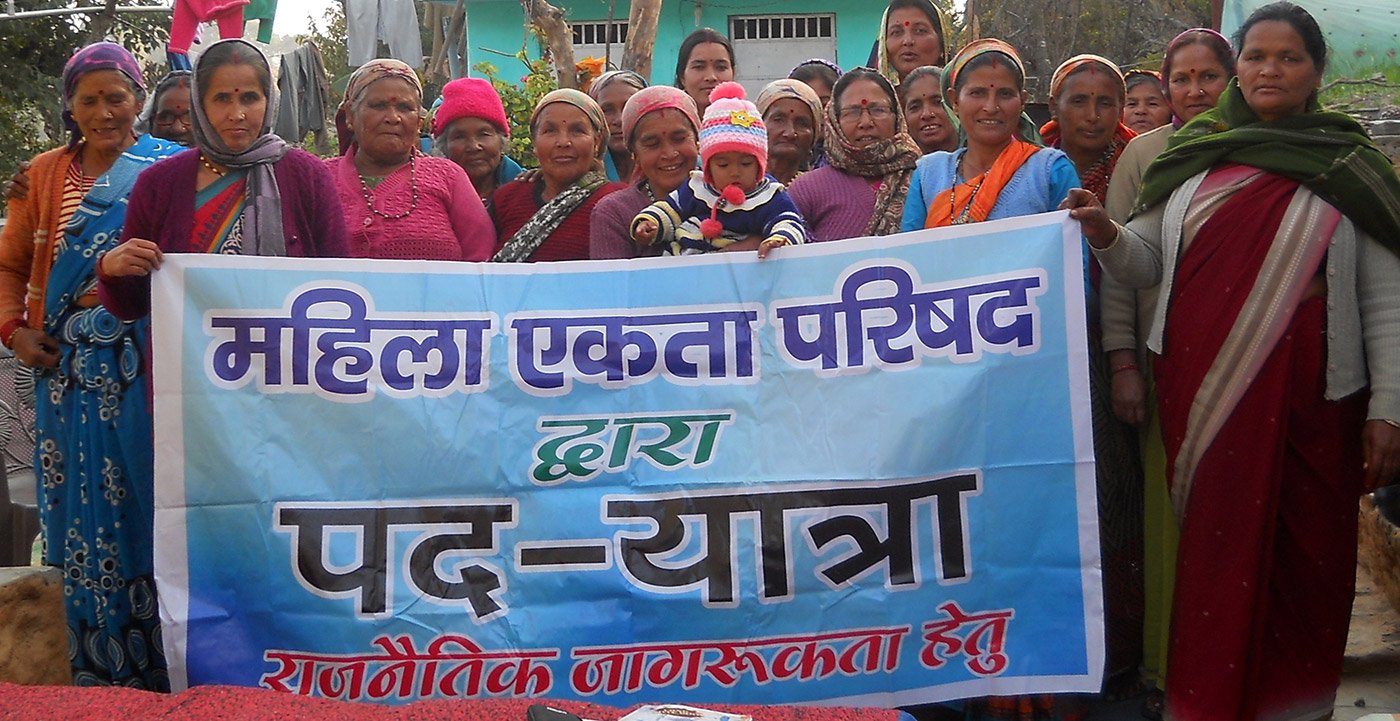 Women across 80 villages in Almora have formed the Mahila Ekta Parishad: in Dwarahat and other constituencies, they conducted election awareness campaigns before the February 15 polls

“Why should people stay here and not migrate?” asks Shankar Verma, a retired forest officer in Someshwar. He is happy that his two sons are away in Delhi and Haldwani. “Even if they face hardships living in cities, they have access to schools, good doctors and jobs.”

Nandi Devi and Puran Lal’s elder son too, after doing a course in hotel management, is in training at a hotel in Jaspur, about 200 kilometres from Someshwar. “My younger son is at home, probably watching television now,” says Puran Lal, whose work as a low-scale employee at the Government Inter College in Someshwar brings in some income. “He asks us not to cultivate anything on the land, because monkeys will destroy everything…”

Still, in early March, when the noise of the elections has faded, Nandi Devi and Puran Lal are sowing potatoes. I ask them if they are waiting to know who forms the next Uttarakhand government on March 11. “Elections come and go, but our lives don’t change, they worsen,” Puran Lal says. “Maybe if families in our village take turns to guard the crops from monkeys and boars, we can save our crops and lives.”