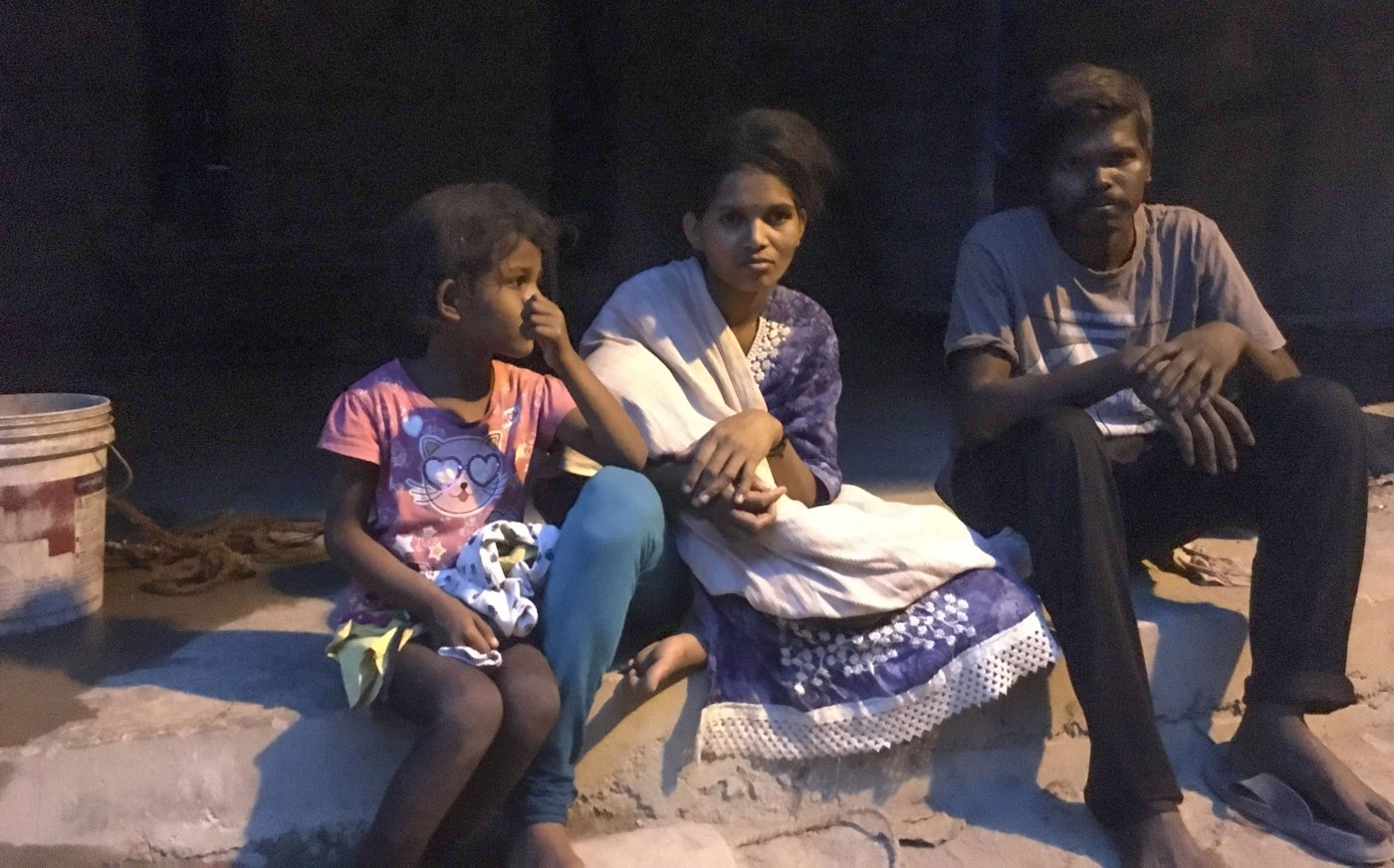 A day after migrant construction workers Amoda and Rajesh reached their new workplace in Bengaluru, the lockdown began – leaving them with no wages and nowhere to go. A PARI report by high school students

When they arrived at the building site in south Bengaluru to begin their new job on March 23, Amoda and Rajesh had no idea what lay in store for them.

Their plan to start work on the construction site in the J.P. Nagar neighbourhood was disrupted the very next day, when the Covid-19 lockdown was announced. They knew nothing about the coronavirus – they still don’t. “Somebody told us to be careful, but we don’t even know what to be careful about. All we know is that there is no work,” Amoda said, when we first met them in early April.

Amoda and Rajesh, who prefer to use only their first names, are both 23 years old. They usually move from one construction site to another in Bengaluru with their two children – three-year-old Rakshita, and one-year-old Rakshit – to earn a living.

From March 23, this young family has continued to live on the J. P. Nagar construction site with no work, no wages and with very little food. The electricity and water supply has been irregular. “The contractor keeps telling us he’ll come again, he’ll come tomorrow. He just comes and goes. We don’t know much about him, who he is, what he does. We don’t even know his name,” Amoda said. 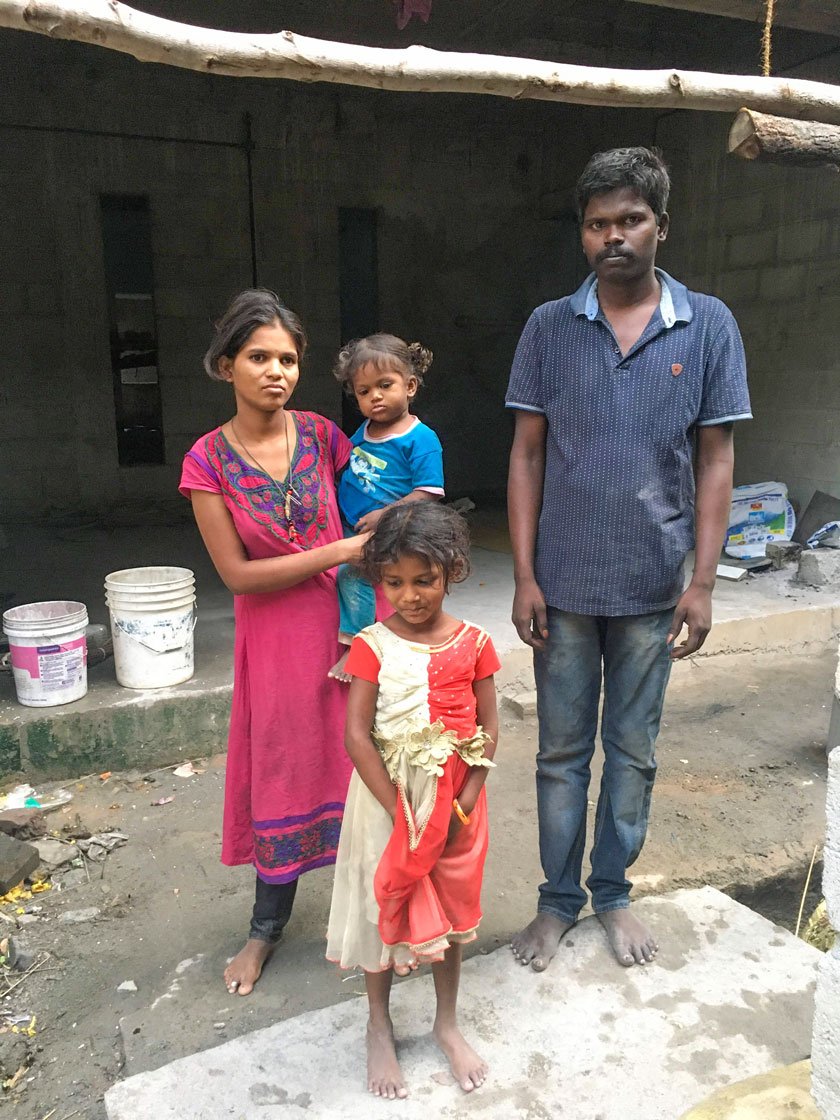 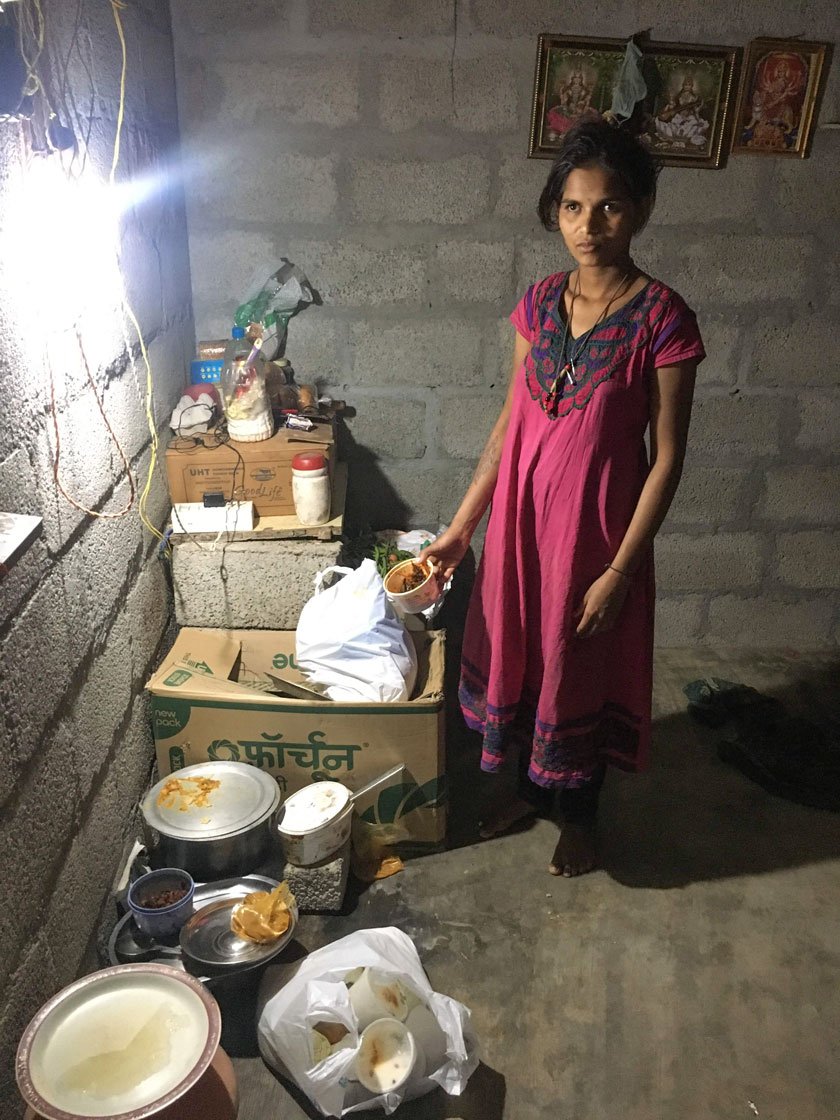 Amoda, Rajesh and their kids Rakshit and Rakshita have stayed i n a small shed on the construction site during the lockdown

She and Rajesh have moved many times since they got married in 2015. Amoda arrived in Bengaluru that year to join her husband, who has been migrating for work at construction sites since 2010. She arrived from Kannamur, the hamlet in Tamil Nadu where they were both born, located in Oppathavadi panchayat of Bargur block in Krishnagiri district. Both belong to the Valmiki caste, listed as an OBC in Tamil Nadu.

Rajesh was only 13 when he came to Bengaluru with his parents – they came looking for work in the city’s booming construction industry. “People know that you can earn more in the city, so everyone comes here,” he said.

Despite spending a decade in the city, he has not been able to acquire any state-issued identification card that could have helped him get rations and other relief materials during the lockdown.

Neither he nor Amoda have a ration card, Aadhaar cards or birth certificates, and no permanent address either. They had hoped to procure the IDs required to receive the benefits of government schemes for families living below the poverty line (BPL). “We thought somebody or the other in the city would help us get a ration card or a BPL card, but so far it has not happened. I don’t have time to go and get one. We are busy with work [before the lockdown] every day of the week. We can’t afford to lose a day’s wage,” Rajesh said. 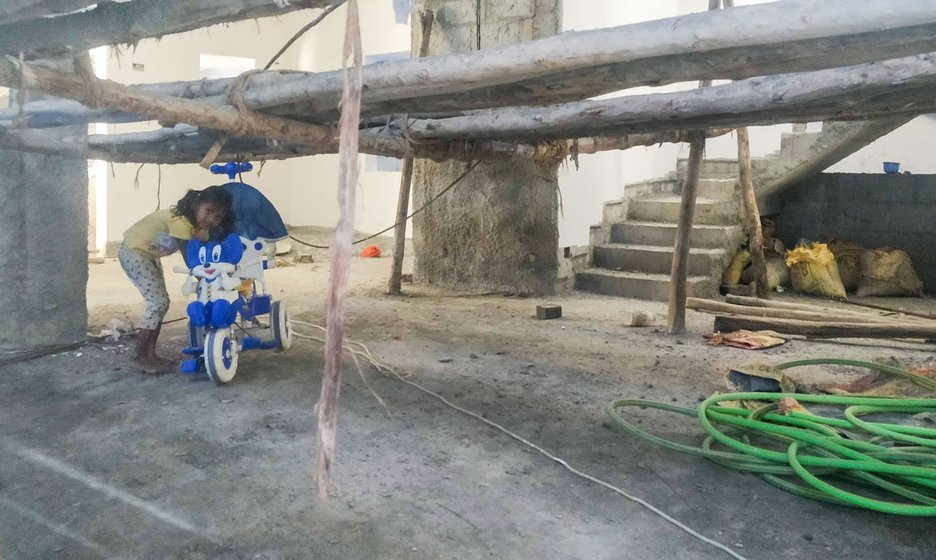 Before she got married to Rajesh, Amoda worked in a textile weaving mill in Bargur – the town is about an hour away from Kannamur by shared autorickshaw. She dropped out after studying up to Class 10 in a Tamil-medium government school in Bargur. She remembers learning science and math there. She and Rajesh, who never went to school, share a flair for languages – both can speak Tamil and Kannada, and also Telugu, because Bargur shares a border with Andhra Pradesh. Rajesh speaks Dakhni too, a the language spoken widely in Bengaluru.

When there is work, Amoda and Rajesh each earn Rs. 350 a day. They get paid at the end of every week. “It is very difficult to get any work in the village. Whatever little work there is – painting, construction – is in Bargur. It costs 30 rupees to travel from Kannamur to the town and back. Most people leave our village and come to Bengaluru city to work,” Amoda said.

After she moved to Bengaluru, her parents, who don't own any land in the village, also came here to work on construction sites. But both Amoda and Rajesh are not in touch with their parents, though they all live and work in the same city. “We don’t have a phone. We have never had one,” Rajesh said.

When the contractor showed up at the J.P. Nagar site on April 27, they asked him when work would start. “He said we have to wait until everything opens up, only then we can start work.” So the couple carried on working with whatever was available on the site – some cement, wood and bricks. “We might as well get some work done with the materials we have here, rather than not do anything at all – even if we aren’t getting paid for it,” said Amoda, plastering the cracks of a wall with cement.

“At every site, we build a temporary room to stay in. That is our home,” she added, pointing to a small room on the side of the main construction site, where they were the only ones living. Their 6x10 feet ‘home’ is made of cement bricks and a tin-sheet roof (held in place by weights). Inside, a single bulb hanging from the ceiling casts a weak light all around. 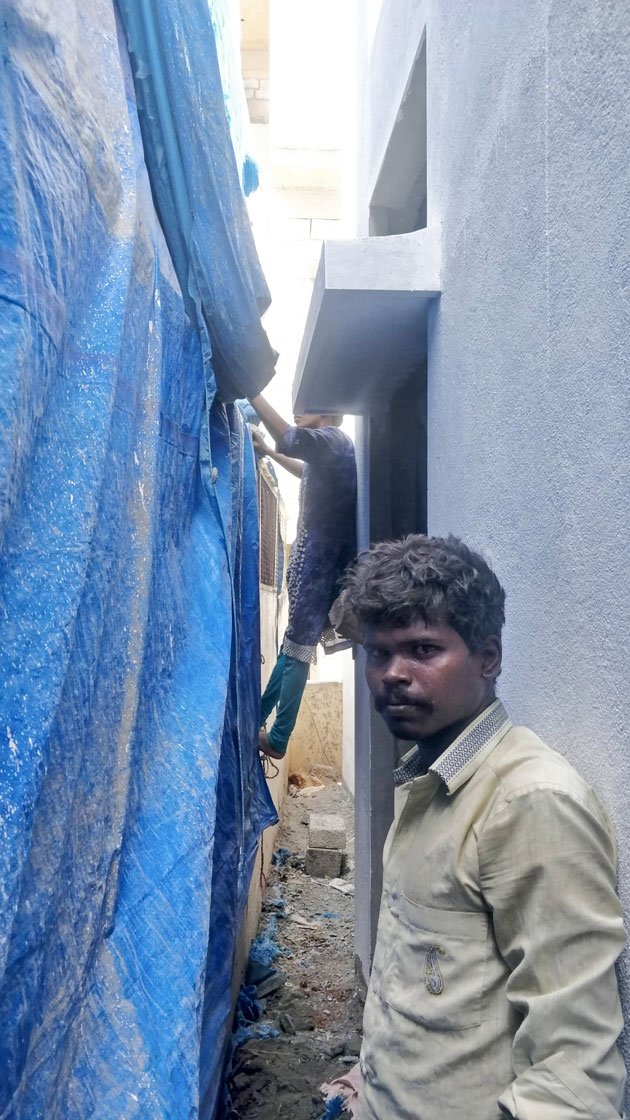 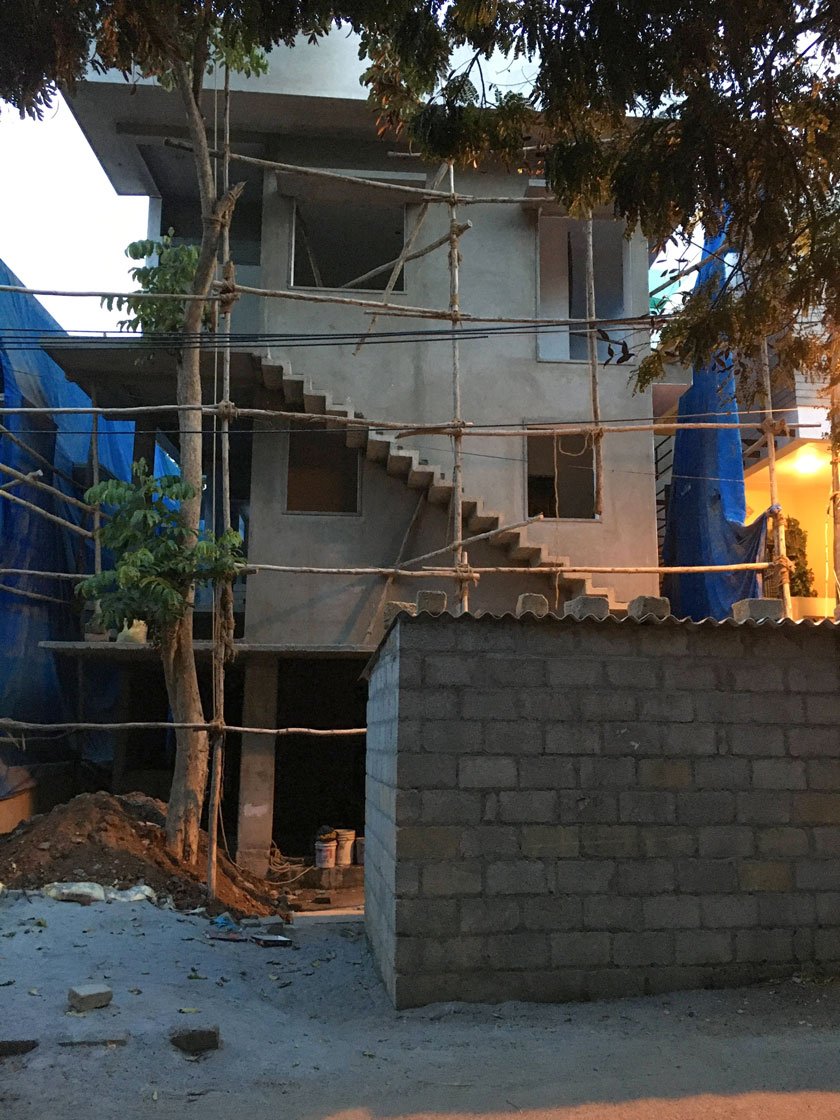 The couple worked with whatever was available. 'We might as well get some work done... even if we aren't getting paid'

Amoda and Rajesh kept themselves busy throughout the lockdown. Amoda cooked, cleaned and did all the household chores. Rajesh took care of the children when she was working. “This morning we ate plain rice, and now we will eat these with a chilli, or just plain,” Amoda told us, flipping chapatis on a makeshift stove of cement bricks around a wood fire.

“We had some savings from our previous job, but it bought us only a week’s worth of food. After that we just relied on what people who passed by on the road gave us, and the food we received from a neighbouring house. There were days when we didn’t have anything to eat,” said Amoda. Things got better when some people in the neighbourhood started giving them food and some money.

Although the Karnataka government first requested migrant labourers to stay back, and then cancelled the Shramik trains on May 5 to hold them back, many workers have spoken to the media about poor living conditions and no wages as their reasons for leaving. The decision to cancel the trains was overturned two days later. But until May 18, when we last met Amoda and Rajesh, they had no information about when work would begin on their site.

Asba Zainab Shareef and Sidh Kavedia are 17 years old and students of Grade 12 at Shibumi School, Bengaluru. This is Sidh’s second story for PARI.

Other stories by Asba Zainab Shareef and Sidh Kavedia