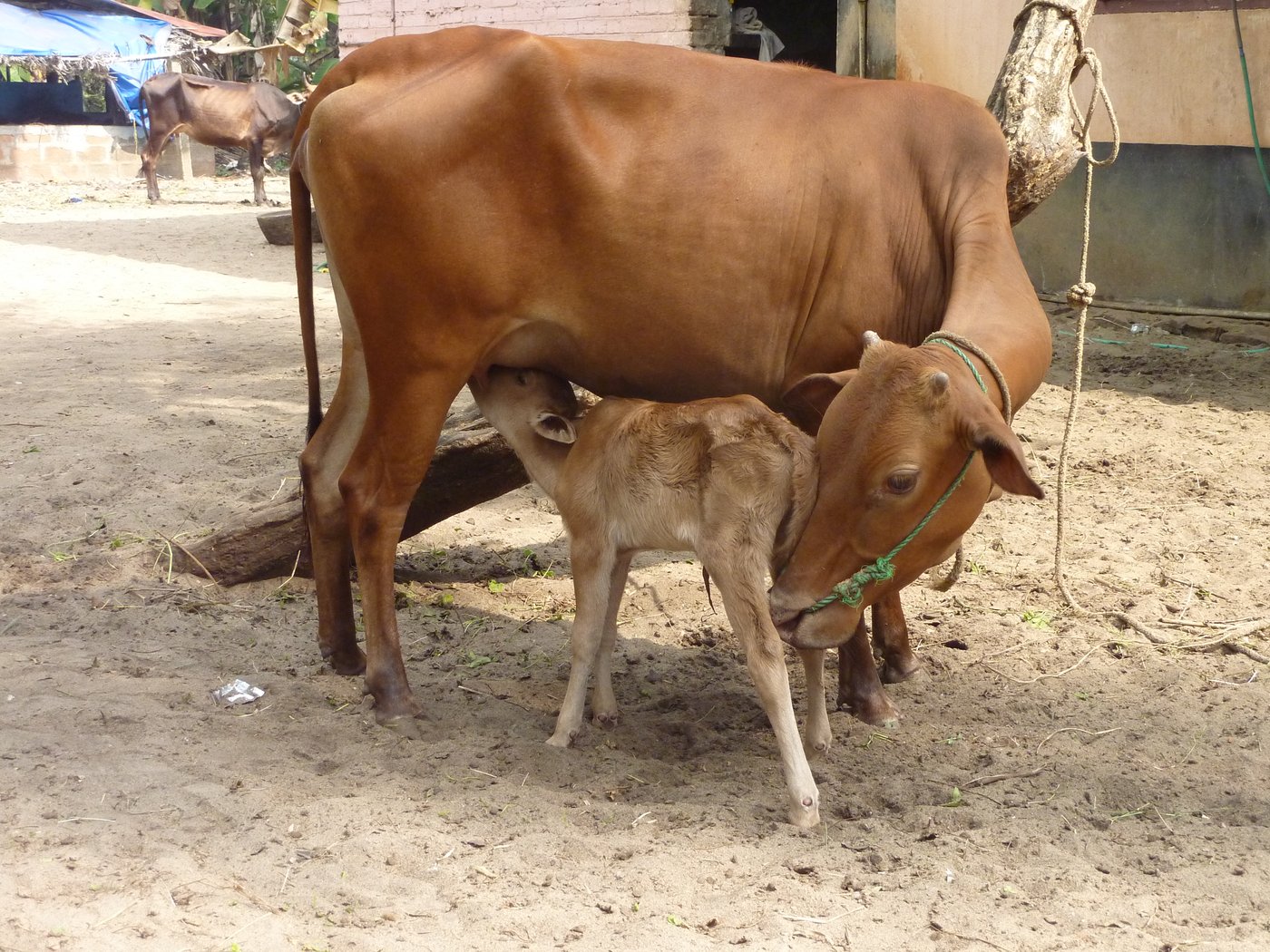 When Kerala agriculture minister K.P. Mohanan paid Chandran ‘Master' Rs. 15,000 for a Vechur calf last September, he was rewarding a conscious law-breaker. Yet, the minister, on behalf of the Livestock Development Board, was doing the right thing – and everyone approved. Chandran Master and other intrepid souls have helped keep Kerala's unique cattle varieties alive. This, despite antiquated laws that made the breeding of such animals by farmers illegal without a licence from the state's Director of Animal Husbandry. And through some years when livestock inspectors relentlessly castrated the bulls of these “inferior” breeds, boosting the dominance of crossbred cattle.

This flowed partly from the idea that higher milk yields, regardless of costs and consequences, were all that mattered. In what could mark an attitude shift, the state is now paying rebel farmers for resisting its own depredations.

Chandran Master keeps 24 head of cattle, mostly rare indigenous breeds, in the compound of his home in P. Vemballur village of Thrissur district. These include the tiny Vechur cow, symbol of Kerala's domestic cattle crisis. By 2000, the animal was on the World Watch List for Domestic Animal Diversity of the Food and Agriculture Organisation’s ‘Critical-Maintained Breeds List’. A variety makes that list “when the number of breeding females” is 100 or less. Or when “the total number of breeding males” is five or less. Or if the overall count is 120 or less, and falling.

In Chandran Master's home, the count is rising. “I gave the Livestock Board five Vechur calves,” he says proudly. And got two Gir calves and Rs. 45,000 in return. A tiny Vechur calf had been born – in his compound – just six hours before we arrived there. Her mother, a fine animal, is 82 centimetres high. The Vechur is the world's smallest cattle breed. November 2010 saw Diana, a 77 cm Vechur (also from Thrissur district), enter the Guinness Book of Records as the smallest cow in the world. 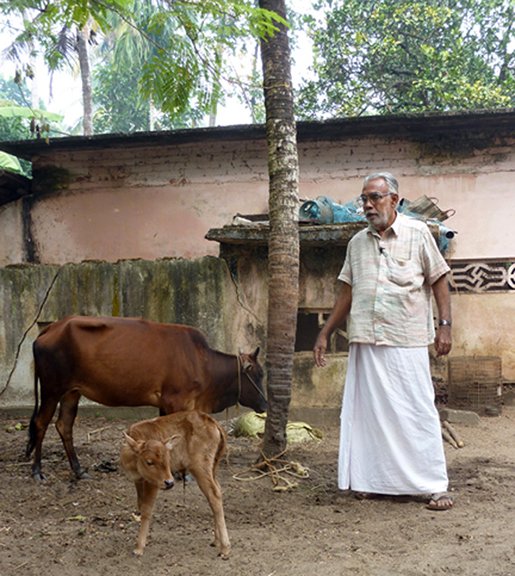 Chandran Master with the tiny Vechur calf, the latest addition to his diverse herd. He has animals of 11 different indigenous breeds in his compound

Mostly, this breed averages around 90 cm in height and about 130 kilos in weight. It yields up to three litres of milk a day and requires very little by way of feed or maintenance.

Alongside the “world's smallest cow” are the Vadakara Dwarf, the Kasargode Dwarf, the High Range Dwarf and other indigenous cattle breeds. The 72-year-old former school teacher scoffs at the official mindset on cattle. “The cow for them is just a milk-production machine” he says. “Their view has no room for the composition and quality of the milk. Much less for the role of cattle in agriculture and in a farmer's life. None at all for the impact on the environment, diversity or community.”

Nambiyandra Ayyappan Chandran is an award-winning former English teacher who worked 36 years in Kerala and Oman. He has “pledged what remains of my life” to conserving breeds of bos indicus (native Indian cattle). His living room sports a huge photo of the Rs.15,000 cheque from the Kerala Livestock Development Board. “Roughly what I lose each month on my passion.” But Chandran Master is okay with that.

“My cows,” he points out, “are zero maintenance – they are native and do not need a high-input diet.” But he also tries to grow 30 types of mangoes and an equal number of bamboo varieties, all indigenous. Also a few native kinds of fish and many traditional plants. His son tries to bridge the household deficit through high-earning horticulture. If the family converted some of its 18 acres to real estate, he would be rich, but Chandran Master has “a mission and a passion.” 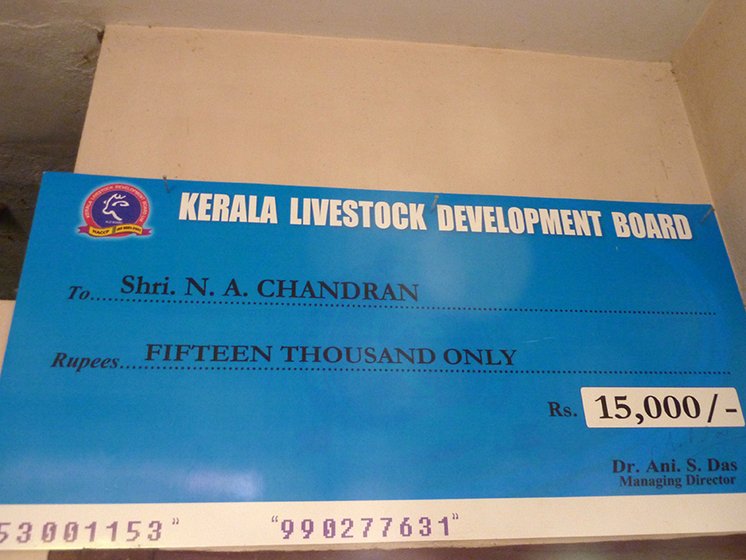 “Malayalis take the easy way out in everything,” agriculture minister Mohanan had said while handing over the Kerala Livestock Development Board cheque. “Hence, they have not taken pains to preserve native breeds such as Vechur cow and Kasargode Dwarf. Instead, they have gone for cross-bred varieties. Malayalis should be aware of a global movement for preservation of domestic breeds of animals.”

However, native breeds were ruined not by people but by official policies over a long time.

Kerala's anti-indigenous drive across decades was one factor in the collapse of its native cattle numbers. Livestock Census figures show a drop of 48 per cent in the total cattle population between 1996 and 2007. But it goes back further, to when the Kerala Livestock Improvement Act of 1961 gave “the licensing officer” the “power to order castration of bulls.” And farmers ordered to castrate their bulls had 30 days to do so. An amended Act in 1968 also promised fines and imprisonment for those failing to comply.

Sosamma Iype, retired professor, Animal Breeding and Genetics from Kerala Agricultural University (KAU) was a pioneer in reviving the Vechur breed. She and Abraham Varkey, retired professor of Veterinary Surgery, make this point. “On the one hand, you needed a licence from the state director of the Animal Husbandry Department to be able to keep a bull. On the other, an inspector finding such a bull [Vechur or any other kind] was bound by orders to castrate it! So no one ever sought a licence!”

The castrations drove some native breeds to near extinction. (Similar drives occurred in other parts of the country, notably Odisha. There, an insane project aimed at boosting milk production all but wiped out the Khariar bull, the best breed of the Kalahandi region, by 1980. It also transformed what was then a milk-surplus region, into a milk-deficit one). 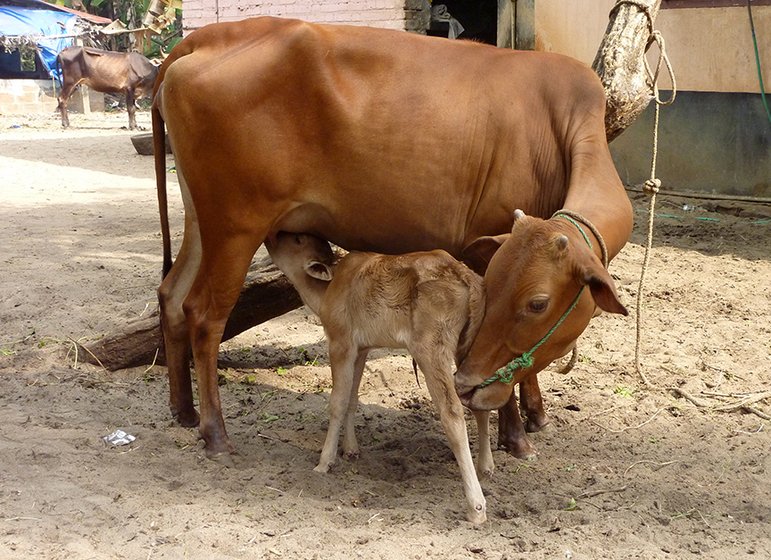 Mother and child: the mother is a Vechur cow, the world's smallest cattle breed – she is 82 centimetres tall. The calf is just hours old

Still, the Vechur survived. Partly, says Prof. Varkey, “because a few escaped, being in regions too remote or forested for the vets to reach. And partly because temple bulls were exempted for religious reasons.”

They also survive because of people like Sosamma Iype. She and others were part of a drive to conserve local breeds that saw the founding of the Vechur Conservation Trust in 1998. “The search for survivors, though, began in 1988,” says Prof. Iype. “And with the help of a student search team headed by Anil Zachariah, we found eight by the end of that year. We got Rs. 51,000 sanctioned by the then vice chancellor of KAU to buy the eight animals and provide them with feed.” Her work at KAU saw a turnaround in the fate of the Vechur breed and earned it wide recognition.

But don't the crossbreeds outclass native breeds in milk yield? “That can't be the only yardstick,” says Iype. “Check the milk yields against input costs. The expense of the crossbreeds is enormous. They are far more prone to outbreaks of illness as we were reminded again in 2009 during a severe outbreak of ‘foot-and-mouth’ disease. There are indeed several farmers who prefer crossbreeds as an income source, through sale of milk. There are also 25-30 per cent, who prefer smaller, less costly animals. These households look at it from the point of view of home consumption, quality of milk and food security. “The Trust today promotes the cause of not only the Vechur, but other Kerala breeds of cattle, goats, pigs and ducks as well.

Back in his home in P. Vemballur village, Chandran Master wants to know: “When are you going to help me get a Khariar Bull from Orissa?”

This article was originally published in The Hindu on February 27, 2012.