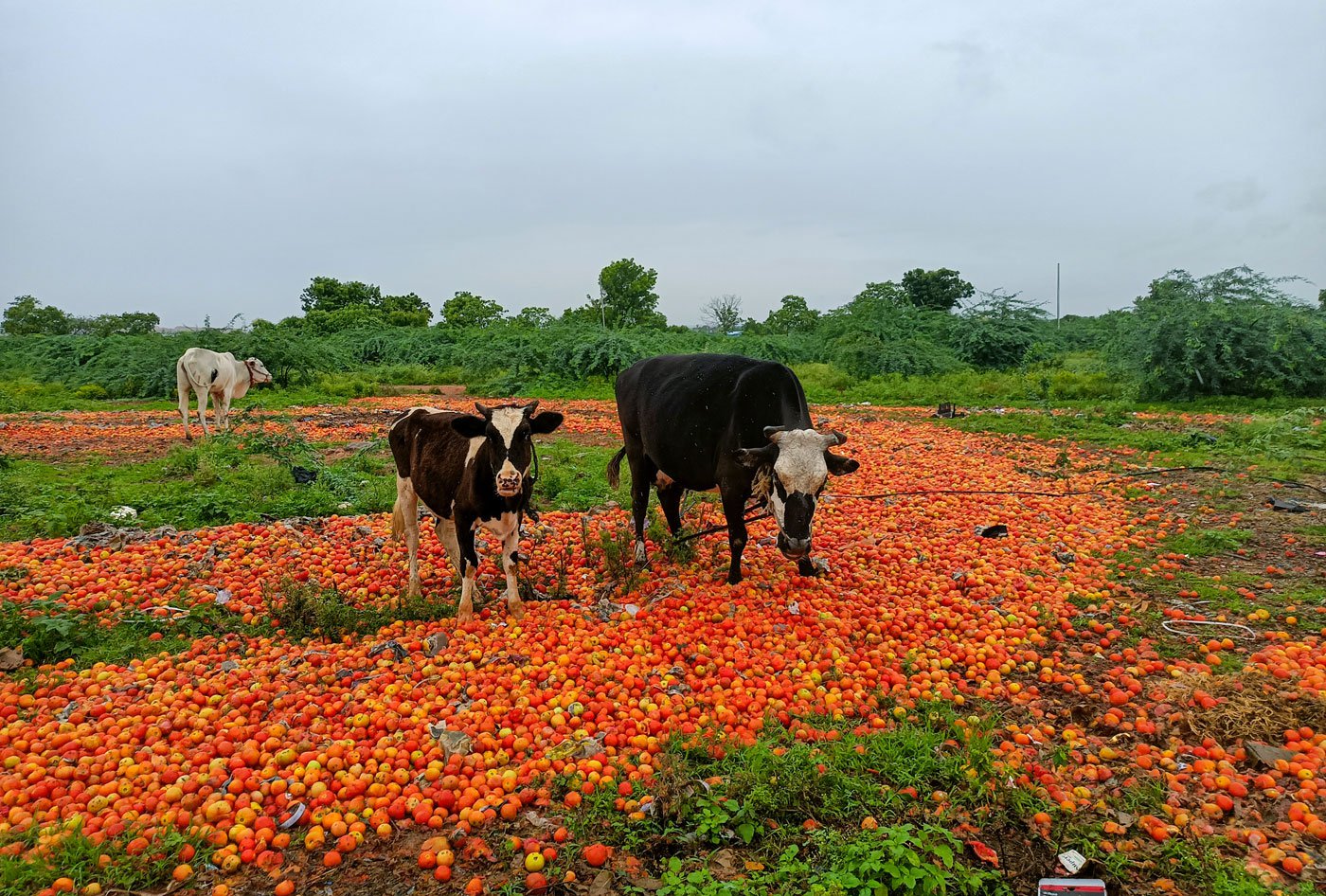 Anantapur: till the cows come for the tomatoes

All the tomatoes you can eat – for free. If you’re a cow, and in this season, that is. In other seasons, it helps if you’re a goat.

This field near the Anantapur tomato market yard serves as a dumping ground when the prices of this fruit or vegetable dip. (Tomatoes are fruits that are considered vegetables by nutritionists, says Encyclopaedia Britannica). Farmers who’ve brought in their produce from nearby villages usually throw away their unsold tomatoes here. This spot is often crowded with goats. “But if goats eat tomatoes during the rains, they get flu,” says P. Kadirappa. He’s a shepherd who brings his goats into this town from Bukkarayasamudram village, barely five kilometres away, and also in Andhra Pradesh’s Anantapur district.

That’s a bit of a revelation, that goats can have more delicate constitutions than cows – and even contract the flu. It’s been raining in Anantapur over the last few days and so the goats were denied their favourite fruit. They did, however, hang around nearby chewing weeds and grass, perhaps casting envious glances in the direction of their larger rivals. The shepherds normally pay nothing to the farmers for this feast for their animals, as, sometimes, thousands of tomatoes are thrown away each day.

Tomato prices in Anantapur market usually fluctuate between 20 and 30 rupees a kilo. They are found cheapest at the Reliance Mart in town. “We once sold them for just around 12 rupees a kilo,” a staffer at the Mart says. “They have their own suppliers,” a vegetable seller says of the Mart, “but we buy at the market yard and usually throw away what’s going bad at the end of the day.” 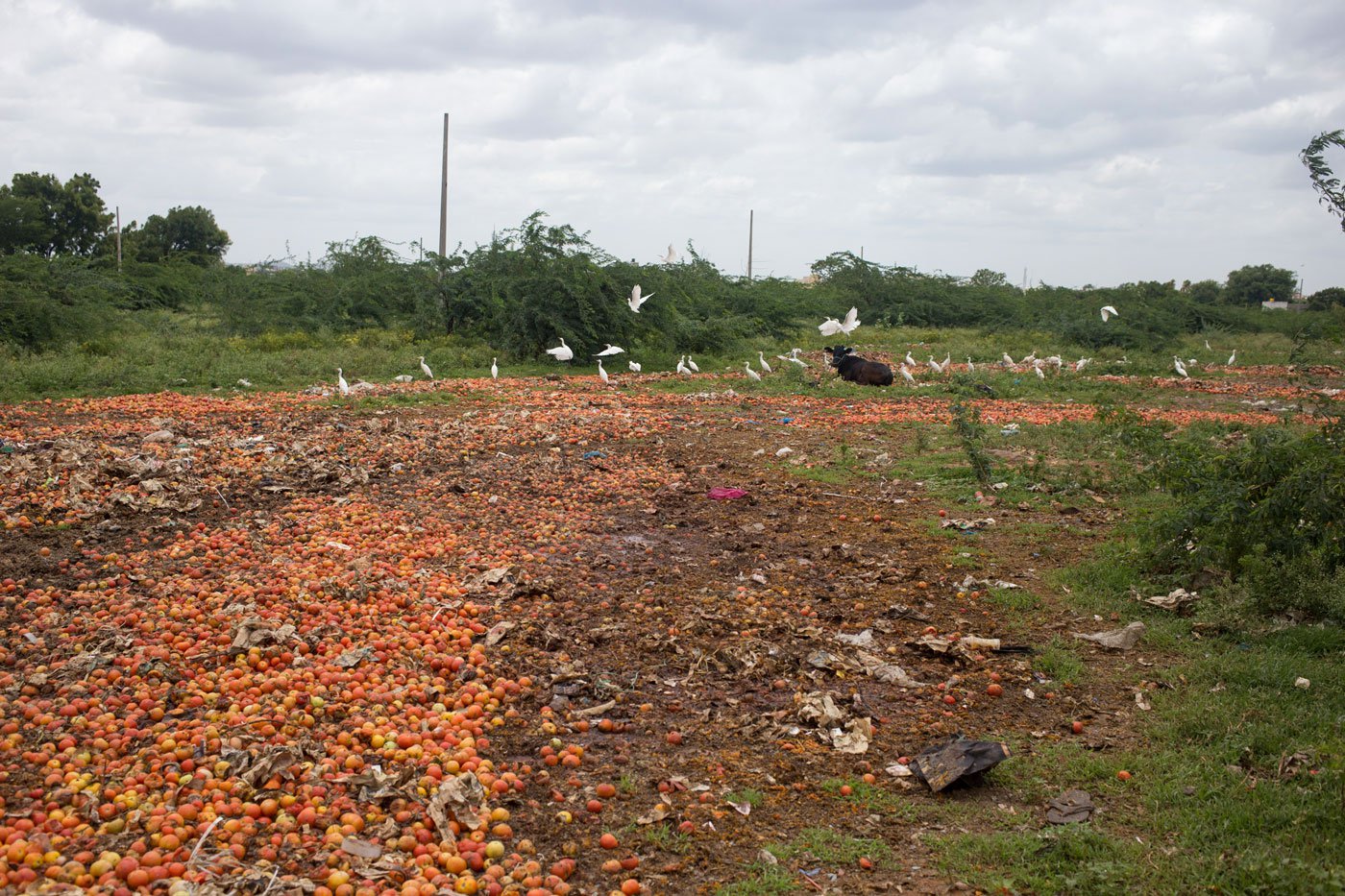 However, those are prices at which customers buy the tomatoes in the market. The farmers get pathetic sums – ranging from Rs. 6 a kilo to a maximum of Rs. 20, depending on the variety and timing of the produce’s arrival. The higher price is very rare and doesn’t last more than a day or two. The risk the sellers take is linked to their proximity to, or distance from, the farmer. The highest risk is of course that of the farmer. The lowest is that of the corporate chains sourcing tomatoes from the region.

One trader once bought a truckload of tomatoes for 600 rupees – after prices dipped – and sold them near the market itself. “Pay 10 rupees and take as many as you can,” was his vendor’s cry. That was if your bag was of a smaller size. Pay 20 rupees and you could fill all you could in a larger bag. I believe he did well that day.

The day I took this photo, vendors across Anantapur city sold their tomatoes for 20-25 rupees a kilogram. Reliance Mart fixed the price of a kilo at 19 rupees. Shop shelves here stock tomato sauces of multinational brands like Nestle and Hindustan Lever, who might be the most profitable sellers of tomato products in Anantapur. These sauces were probably manufactured in Special Economic Zones (which get much government support).

Support tomato farmers on the ground would love to get, but don’t. Meanwhile, when prices dip, the cows perhaps rejoice as they approach their juicy Happy Meal.