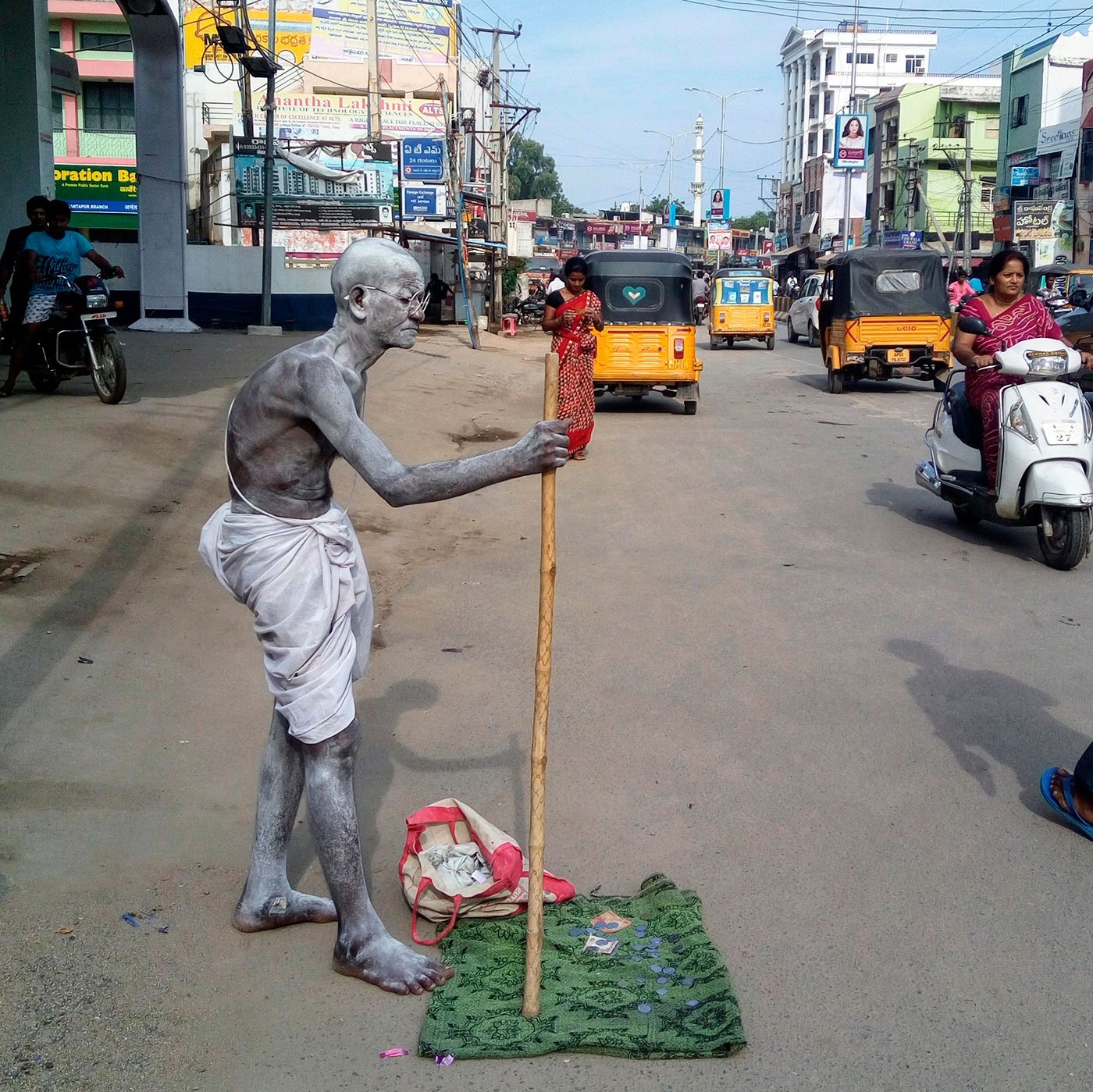 Unable to continue doing agricultural labour, Gangappa began dressing up as Mahatma Gandhi and seeking alms in Anantapur. PARI had published a story on him in May 2017. Two days ago, a car knocked him down

“We found your number in Gandhi’s diary. He was hit by a car near the highway and he died,” B. Krishnaiah, a ration shop owner and political activist, told me on the phone around 7:30 p.m. on Sunday, December 9.

I last met Gangappa – or ‘Gandhi’ – walking on that Bangalore-Hyderabad highway on November 24. It was around 10:30 a.m. He was on his way to Anantapur town to start his day in his Gandhi costume. He was staying at a roadside eatery in Raptadu village, roughly eight kilometres from Anantapur. “Around two months ago, someone told me there is an old man who needs a place, so I let him stay here. I even gave him food sometimes,” says Venkatrami Reddy, the owner of the eatery. Krishnaiah, who phoned me, often drank tea here and occasionally chatted with Gangappa.

I had written a story about Gangappa for PARI in May 2017. He was around 83 years old then. After 70 years as an agricultural labourer, he had refashioned himself as the Mahatma – dressing up as Gandhi and positioning himself in public places across Anantapur town in western Andhra Pradesh. The alms he received amounted to a better income than what he had earned from agricultural labour.

Gangappa had retired as a labourer in 2016 after he fainted while working in the fields. Then he started braiding ropes for money, but his old man’s dexterity didn’t pay much. That was when he decided to dress up as Gandhi.

His do-it-yourself costume was improvised using everyday objects. He used Pond’s powder from a 10-rupee plastic box to make himself “shine” like the Mahatma. Cheap sunglasses purchased from a roadside shop were his Gandhi spectacles. A 10-rupee cane from the local market was his walking stick. He used a motorbike’s rear-view mirror, which he had found somewhere, to check his make-up and costume.

Left: Gangappa applying talcum powder when I met him in 2017, getting ready to become 'Gandhi'. Right: His wife Anjanamma (third from left) in their village

In this way, since August 2016, every day, Gangappa transformed into Gandhi and stood on the streets of Anantapur or went walking to fairs and monthly markets in the surrounding villages and towns, earning anything between Rs. 150-600 a day. “I made about 1,000 rupees in a day at one parsha [village fair] recently,” he had told me, proudly.

That a frail man can like Gandhi could shake an empire and bring it down inspired Gangappa when he was a child, he had said. He believed travelling and patience were essential to being Gandhi. And by being on the move and constantly meeting new people, Gangappa also tried to escape a reality that haunted him through his life – his Dalit (Madiga) caste.

When I first met Gangappa, he asked me to not write about his caste because he was sleeping at night at a temple in Anantapur, where he had not told anyone he was from a Dalit community. Even when  dressed up as Gandhi, he used religious symbols like a sacred thread and kumkum to try and look ‘priestly’.

Despite the impersonation, Gangappa’s caste and poverty followed him everywhere. When I met his estranged wife M. Anjanamma, and took a family picture in 2017, one of the kids who played at their village home didn’t want to be in the picture alongside Dalits.

When Krishnaiah called me on Sunday, I gave him some details from my story notes and sent him the photo of Gangappa’s family. When I was not able to give Anjanamma’s exact address, Krishnaiah suggested we locate Gangappa’s village home by his caste (referring to the caste-demarcated localities in villages): "May be we can try to find his home in Gorantla by his caste. Did he ever tell you which caste he was from?"

Krishnaiah has a relative who knows the circle inspector in Gorantla – a village around 100 kilometres from Anantapur – where Anjanamma lives with their younger daughter. Their elder daughter, and only other child, committed suicide over a decade ago.  A constable in Gorantla informed Anjanamma about her husband’s death. She collected Gangappa’s body on Monday afternoon, December 10.

No one could identify the car that knocked down the frail old man.