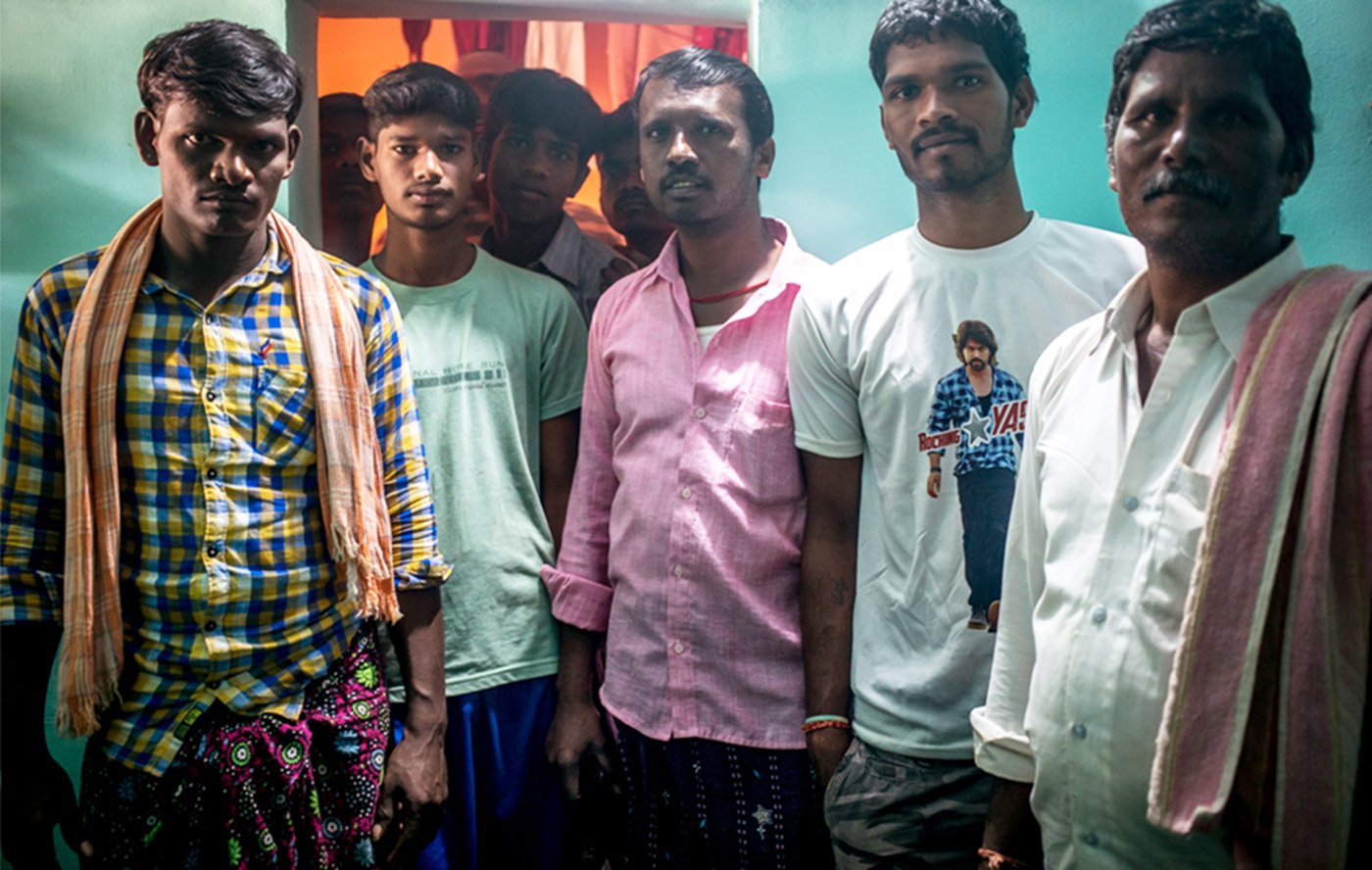 Staying half-hungry due to the demonetisation ‘drought’

When Dalit migrants of Bucharla in Andhra returned home in November for an annual festival, there was no work on farms hit by the cash scarcity on top of poor yields – forcing them to eat less during a festive time

“We can eat only if we work every day,” D. Narayanappa said after returning to Bucharla from Bengaluru on November 4. Like many other Dalits in this village, he migrates to the city to work on construction sites for most of the year, coming home every now and then for a few days.

But in November, the migrants stay on for a month or more in their village in Roddam mandal of Anantapur district on the Andhra Pradesh-Karnataka border. During this month, like the others, Narayanappa too works on the farms in Bucharla to keep bringing in an income. Not working for some length of time is not an option. 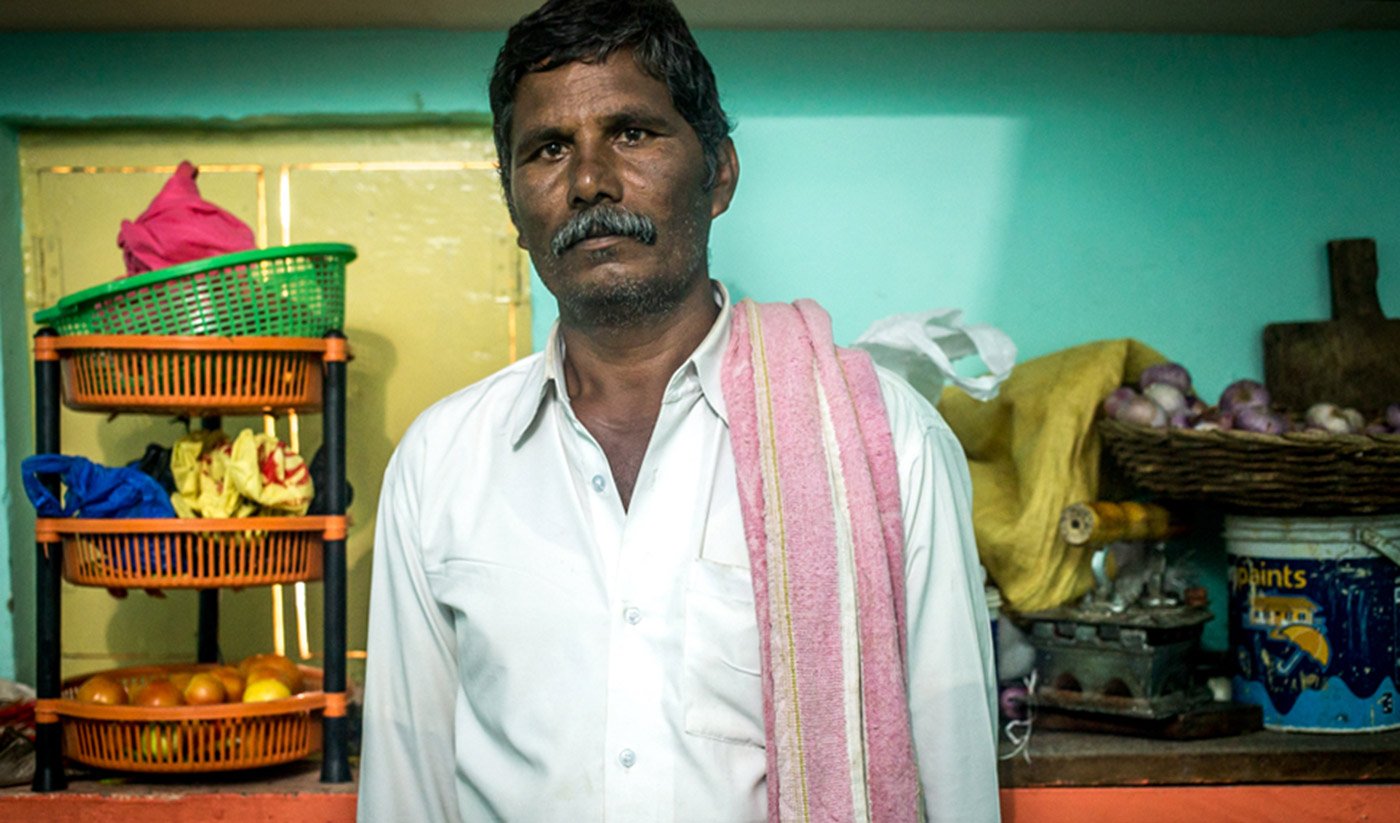 ‘We are Ambedkar’s people,’ says D. Narayanappa at his home in Bucharla, explaining why his community finds it so much more difficult to borrow money informally

The November return is usually a time of some joy for the migrants.  They carry back their modest savings to celebrate an ancestral festival called Shanti. During this festival, the approximately 150 Dalit families in the SC (scheduled castes) colony in Bucharla perform rituals that they believe will protect them from epidemics. They sacrifice bulls and sheep for Goddess Peddamma. The rituals are followed by a day of feasts where the meat of the sacrificed animals is served.

This year, the sacrifices were scheduled for November 29. The migrants had started coming home with the money they had saved, looking forward to the festivities. Then, demonetisation hit them.

Along with the severe shortage of cash in the village, lower groundnut and mulberry yields after a poor monsoon and falling or fluctuating prices have eaten into the farmers’ incomes in Roddam. They have not been able to regularly employ labourers. Many agricultural labourers from various castes in the village were not paid their daily wages – Rs. 150 for men, Rs. 100 for women – for 15 days in November. 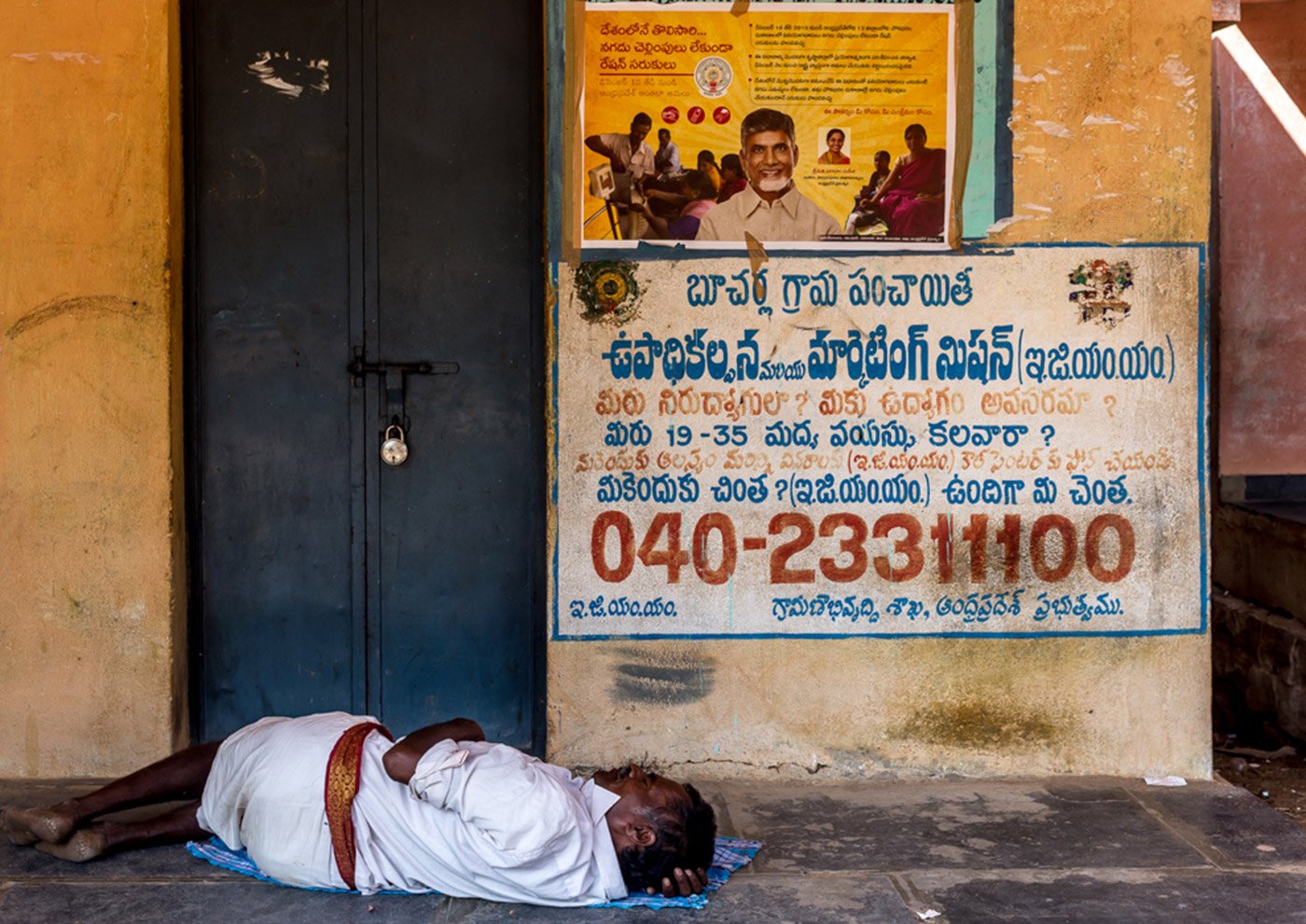 Writing on the wall: an out-of-work Dalit man rests outside the ration store in Bucharla. Ironically, a government helpline number for the jobless is painted on the wall

To get past November without work, and still be able to celebrate Shanti, the Dalits had to eat less. “We have to prolong the rice we have for a few more days,” said Hanumakka, an agricultural labourer.  In November, her family, like the others in the SC colony of around 600 Dalits ate fewer meals every day, and skipped having their weekly meat.

Narayanappa’s seven-member family – his wife, two sons, their wives, and a two-year-old granddaughter – used to consume around 90 kilos of rice and 30 seers (one seer is a little less than a kilo) of ragi every month. “But in November we only ate around 60 kilos of rice and 10 seers of ragi,” he says.

Narayanappa purchases rice from a shop run by G.R. Raghavendra in Roddam village, around three kilometres from Bucharla — a sack of 50 kilos costs Rs. 1,200. Raghavendra’s business is bleak. “In October, we sold around 20 bags of rice, each weighing 25 kilos,” he says. “Last month [November] we sold only 8-10 bags.” 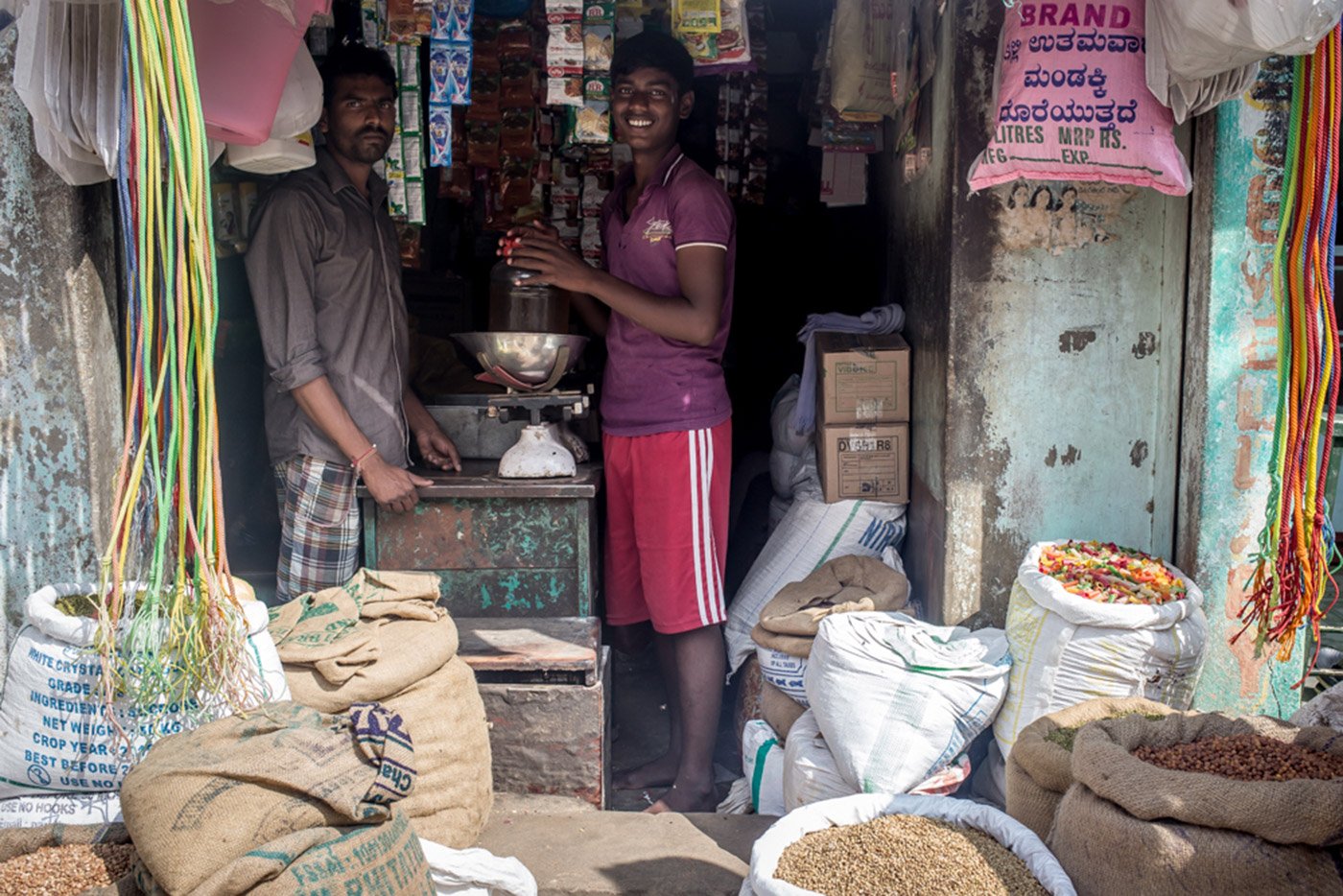 G.R. Raghavendra (left) at his provision store in Roddam village. In November,  he sold less than half the rice he did the previous month to customers hit by the cash crunch

Other grocery shops in Roddam, which serve the 21 villages of the mandal , have also seen business drop after demonetisation. “The sales of all essential items have reduced,” says P. Ashwathalakshmi, a shopkeeper in the village. “We used to sell three cartons of soaps every week. In the first week of December, we couldn't even fully sell one carton.”

The residents of the SC colony in Bucharla get only a part of their grains from the ration shops; the rest they buy in limited quantities at least once a month – they cannot afford to buy large stocks to store. “This time, we didn’t buy because of [a lack of] money [and made do with the rice from the ration shops],” says Hanumakka, who now stays home because work in the village has nearly disappeared. 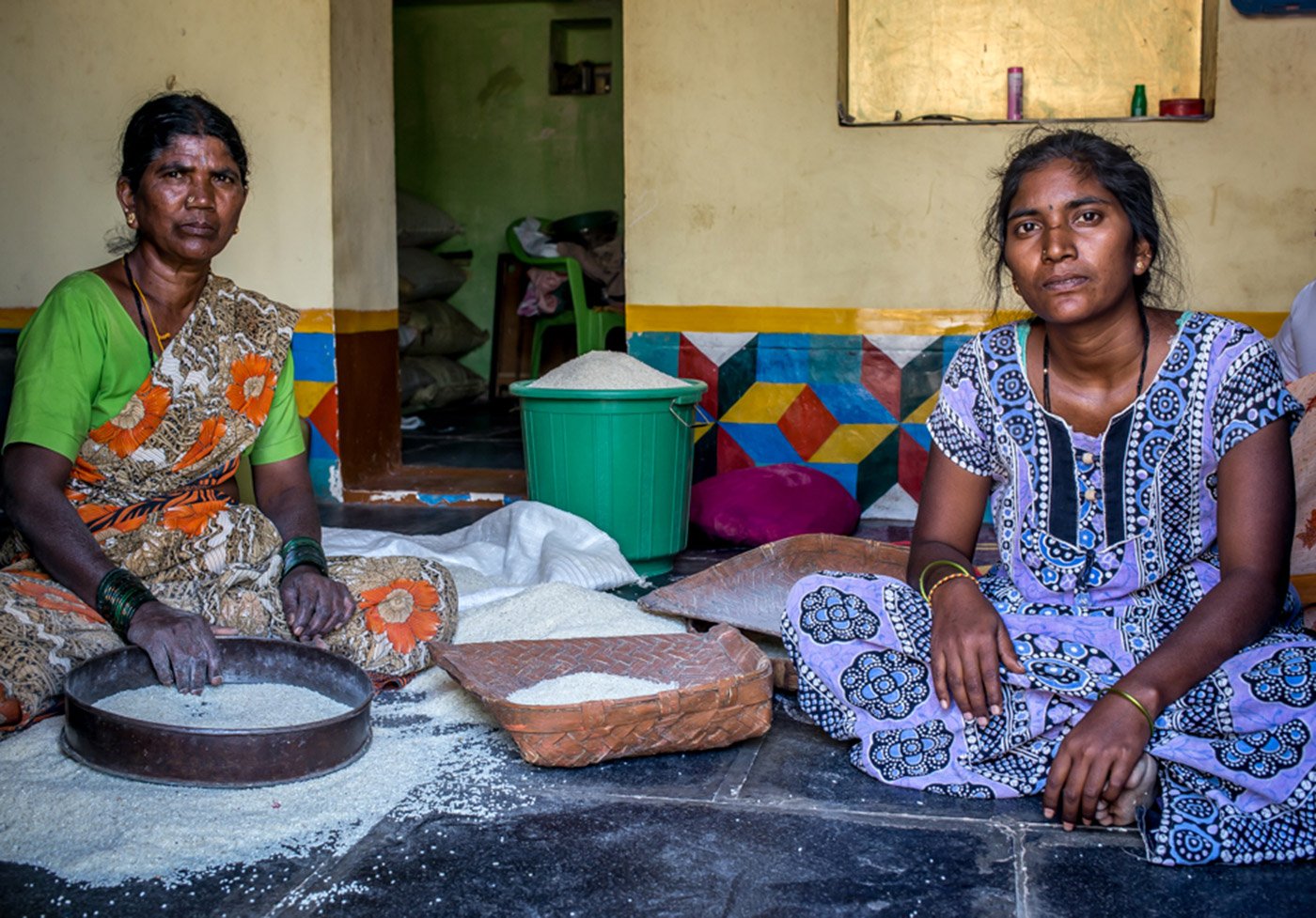 Hanumakka  (left) and her daughter, with rice taken on credit from the ration shop,  which will allow for December payments to be made later

The people of the Dalit colony aren’t new to scarcity. Many of the men here were bonded labourers in various villages in the region before the 1990s. For them, the present situation evokes memories of that period. But, they say, it is less severe this time. “This scarcity [due to demonetisation] is better than the other drought we had around 30 years ago,” Narayanappa, now 49, says, “In my 20s, we used to starve for three or four days in a row. We would soak tamarind seeds in water and eat them, or eat the rhizomes from palm trees to survive. At that time, I had been a jeethagadu [a bonded labourer] for 14 years.”

Now, the former bonded labourers migrate for many months every year looking for work, more so after agricultural options in the village have decreased. Most of Narayanappa’s family migrates to Bengaluru, returning home for a few days once in 3-4 months. They usually work on construction sites in the city, and live on the top of the buildings they work in, or in crammed rooms by the roadside. But they manage to eat full meals paid for by their strenuous work. “We make sure we eat meat two times during a week,” Narayanappa says. This has changed after demonetisation.

After Narayanappa’s family returned to Bucharla in the first week of November, finding no work on the farms, they have had to stretch their savings to meet all expenses. People from the other castes in the village are coping slightly better by sharing stocked grains or borrowing saved money from each other. The people from Narayanappa’s caste have meagre stocks and can’t easily borrow from others in the village.

“We are Ambedkar’s people,” Narayanappa says, to explain why they are unable to borrow money informally, or share stocks with others in the village. He is trying to not mention his caste name (Madiga), which is sometimes used as a pejorative in Telugu. Besides, he does not want to appear needy. “Now we have prestige,” he says. “Even if someone offers us food, we won’t take it. We might eat very little. But we tell them that we have eaten well.” 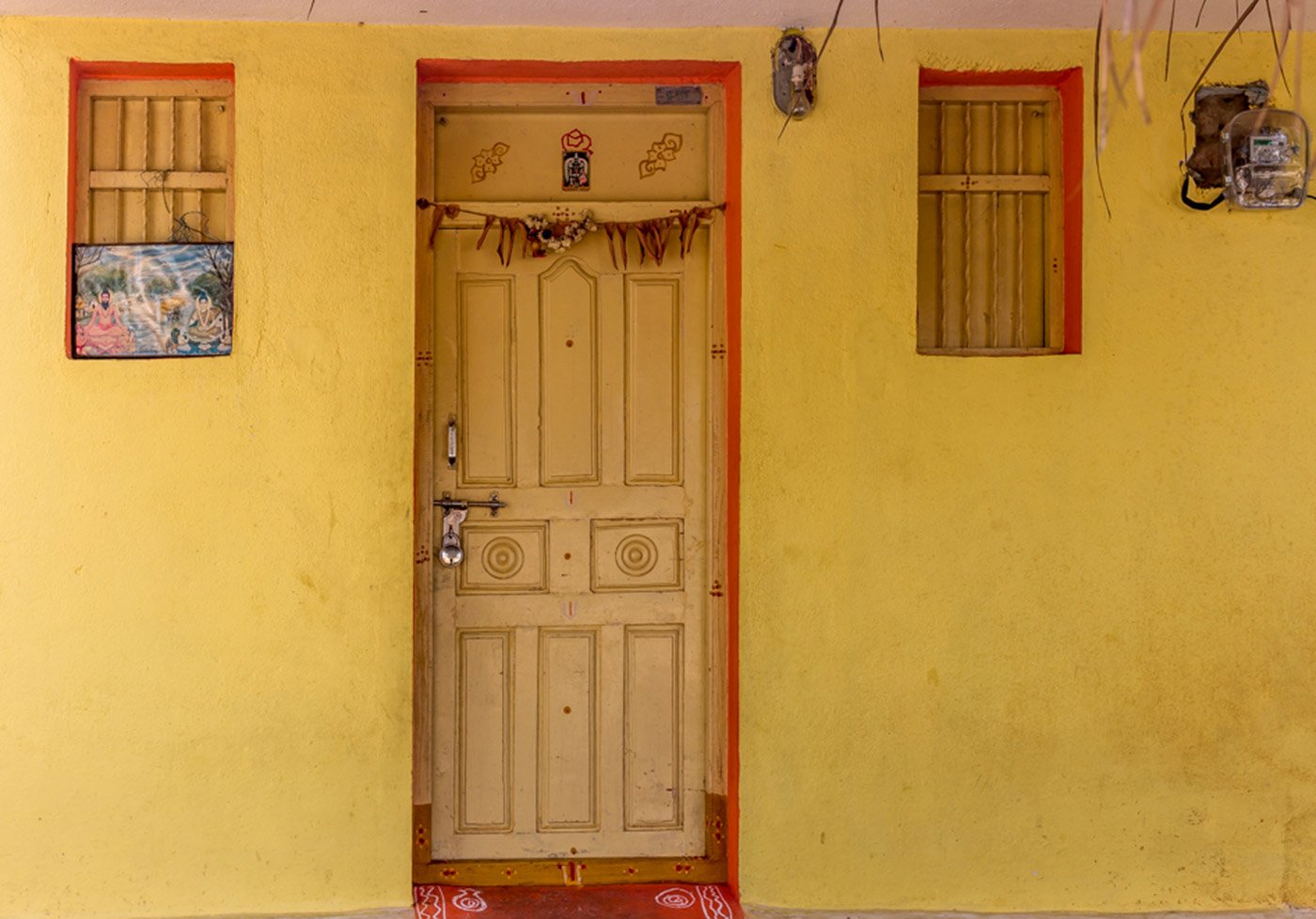 Narayanappa’s locked home. His family, along with others, has left for Bengaluru weeks ahead of their normal schedule

While the members of Narayanappa’s caste are trying to adapt to demonetisation by eating less, the cash shortage in the Roddam branch of Canara Bank that has shaken many families in the village is not the main concern in the SC colony. “We don’t have much money with us. All we want is some work,” says Narayanappa.

Postscript: After going half-hungry for a month,  Narayanappa’s family left for Bengaluru on December 4, three weeks before their planned departure. Many other Dalit families have also left, leaving their children with the elderly. The SC colony in Bucharla that tried to stay festive and crowded last month became silent a week after the festival.