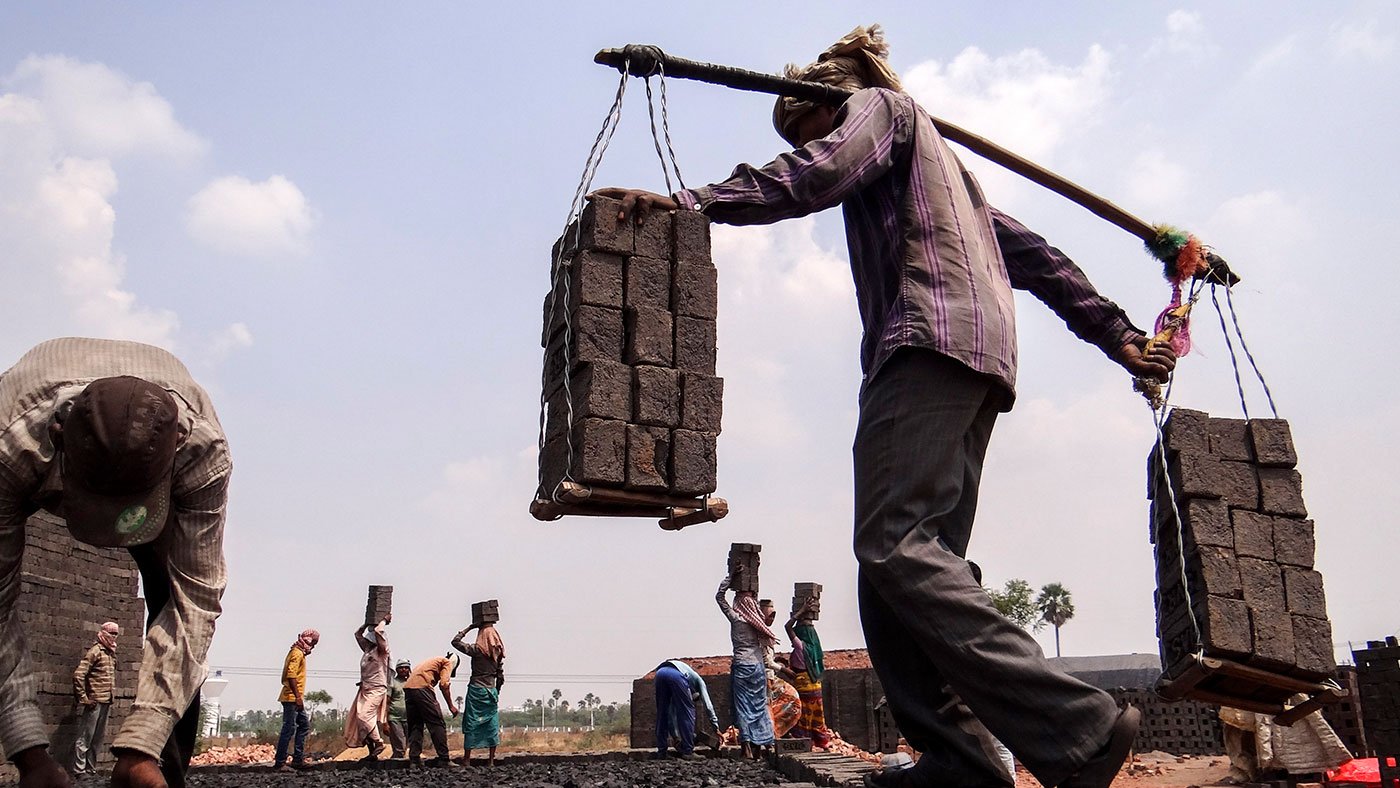 Trying to go to sleep only half-hungry

Many labourers from Odisha migrate to the brick kilns of Telangana, where the contractors and kiln owners exploit the desperation of the migrants – and after months of gruelling work, the workers can end up in debt

Baidehi and her husband have been working at a brick kiln in Domadugu village of Gummadidala block in Telangana’s Sangareddy district for over a decade. They come here every year from Kurumpuri panchayat of Nuapada district. “We took an advance of Rs. 20,000 from the seth ,” Baidehi says. Additionally, the kiln owner pays them Rs. 60 a day as food allowance. “Please ask the seth to pay us at least Rs. 80 so that we can sleep only half-hungry.”

I met Baidehi’s family in 2017,  when I revisited the brick kilns of Telangana, in Rangareddy,  Sangareddy and Yadadri Bhuvanagiri districts.

Many years before this, when researching and reporting on migration from Kalahandi (now sub-divided into Nuapada district) and adjoining Bolangir (or Balangir, now sub-divided into Sonepur district, which is now called Subarnapur) in the 1990s, I had come across four kinds of migrations:

People who migrated to Raipur city (now the capital of Chhattisgarh) to work as daily-wage labourers, rickshaw pullers, hotel cleaners and for other forms of labour; those who left for better-irrigated districts such as Bargarh and Sambalpur; youth who shifted to Delhi, Mumbai and other cities mostly to work as construction labourers; and families who moved to brick kilns in Andhra Pradesh (and later also to coastal Odisha). 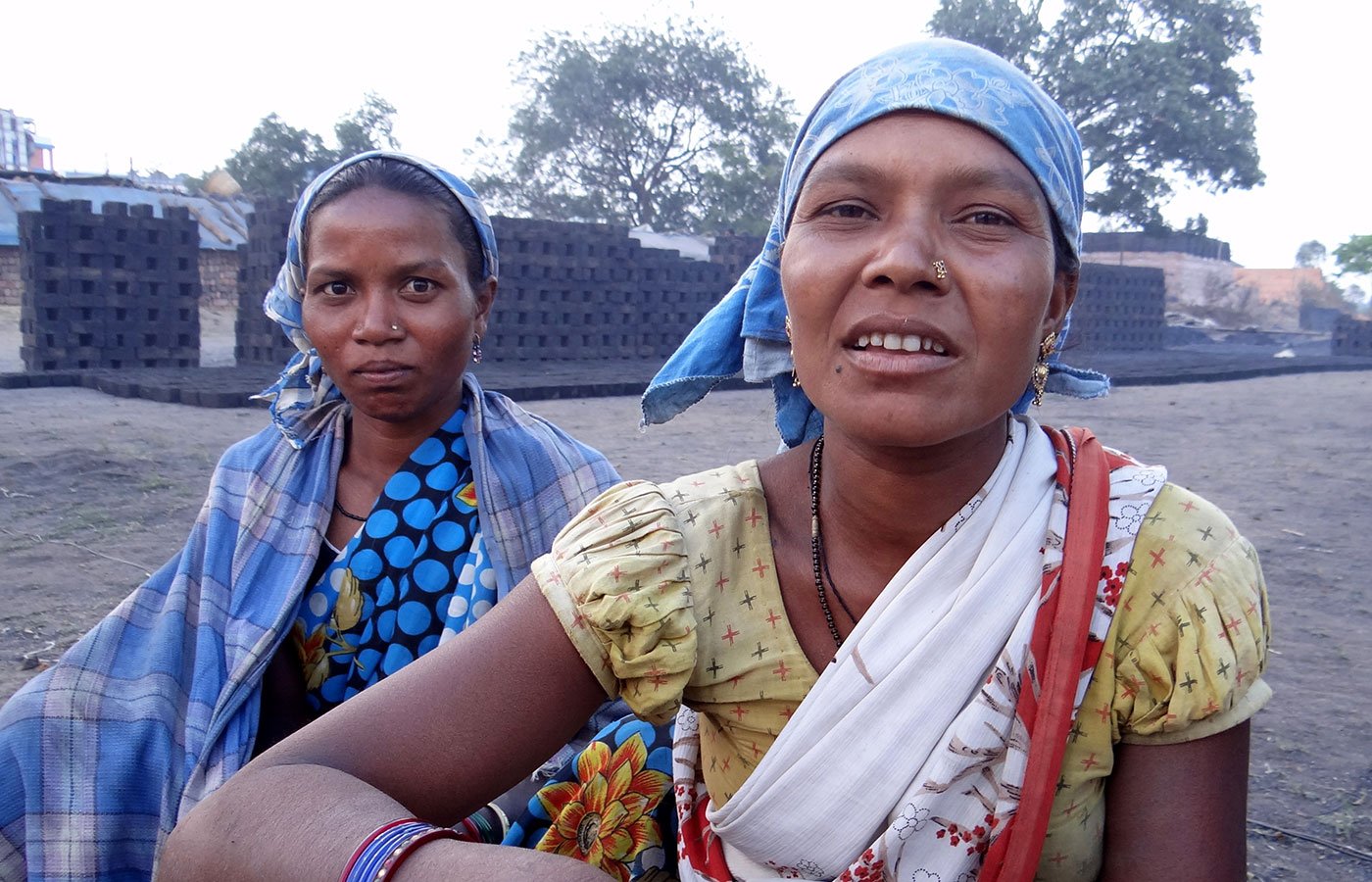 Baidehi (foreground), her husband and relatives have worked at a kiln in Telengana for over a decade. This time, they brought one child along and left the other two behind because they’re in school

The migrations had started in the mid-1960s, when there was a famine-like situation in Kalahandi and Balangir. In the late ’80s and early ’90s, people moved because of drought, crop loss, and debt. At the brick kilns, the kiln owners, seeing the desperation of the Odiya migrants, would pay them less than local labourers. This exploitation continues – a husband, wife, and one other adult worker are considered one unit, and each unit gets Rs. 20,000 to Rs. 80,000 as advance payment.

In return, after a local festival in Odisha that follows the harvest in October-November, the families start preparing to migrate. By December-January, contractors take the workers to the kilns. There they work till around June, and by the start of the monsoon return to their villages, where they work as farm labourers or on small plots of their own land.

The advance the workers take is used to repay their previous debts, or for marriages, to purchase bullocks, pay medical bills, and for other expenses. At the kiln, the Rs. 60 a day as food allowance for each ‘unit’ remains the same regardless of the number of family members who have migrated together. At the end of the season, this amount plus the advance taken is calculated against the number of bricks made.

Each three-member unit earns Rs. 220 to Rs.350 for every 1,000 bricks. This amount depends on negotiations with the kiln owner or contractor. A group of workers can make between 100,000 to 400,000 bricks in around five months, depending on the number of extra helping hands available – physically fit family members other than the three-worker unit. That’s a payment range of Rs. 20,000 to a rare maximum of Rs. 140,000. After the Rs. 60 daily allowance and the advance is deducted, some workers end up in debt at the end of the gruelling kiln season. 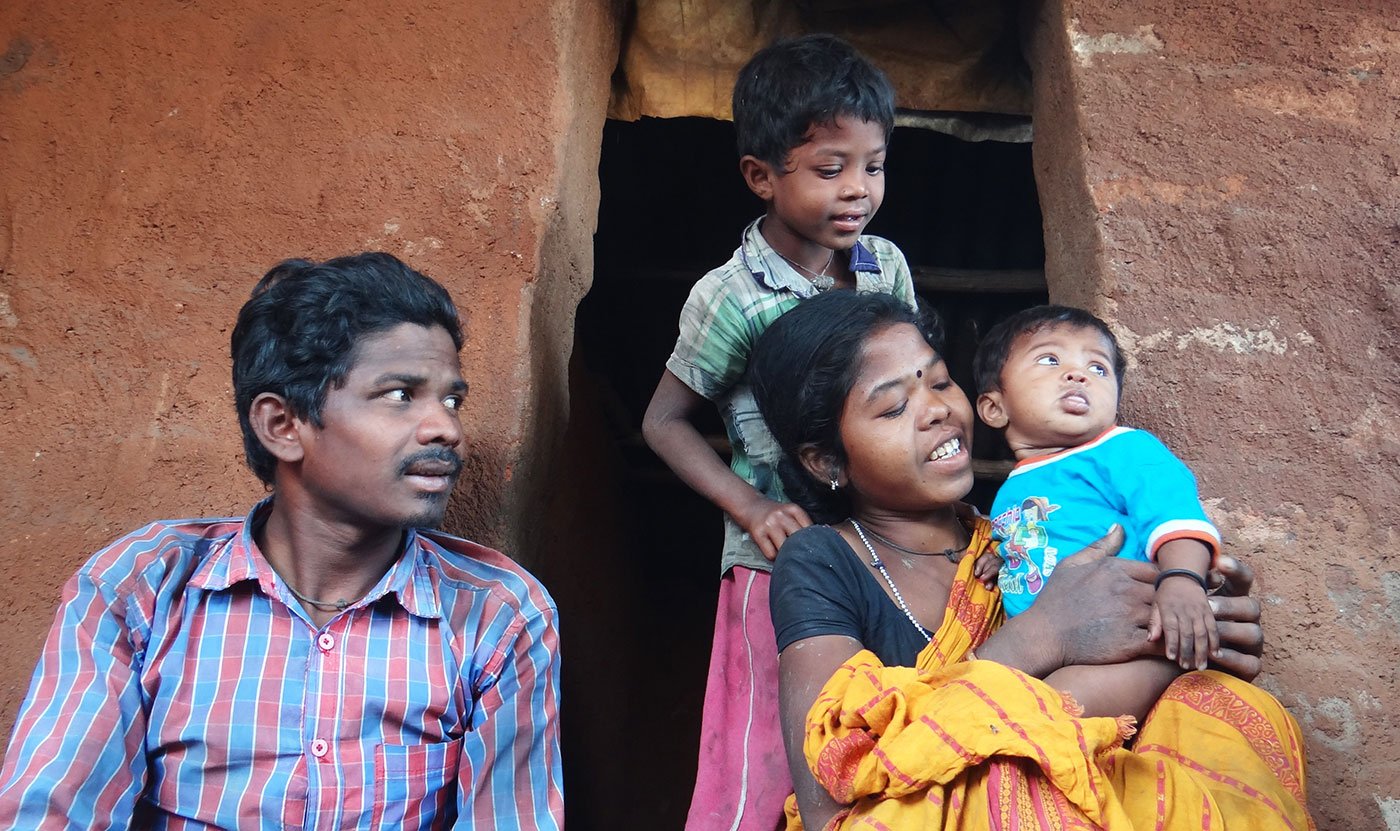 Banita Chinda and her husband Netra have been working for three years at a kiln in Kongara Kalan village of Rangareddy district.They’re from Sargimunda, a hamlet of  Kirejhola village in Boden block of Nuapada district and belong to the Chukotia-Bhunjia tribal group. They are here with their daughters Pinki, 7, Laxmi, 5, and seven-month-old Kalyani. “Our sardar [contractor] and the kiln owner will sit together and fix our wage rate.” Netra said.“We have taken 80,000 rupees as advance for three adults – me, my wife, and my cousin. With 10,000 we bought gold, deposited 17,000 in the bank, and will use the rest for our consumption” 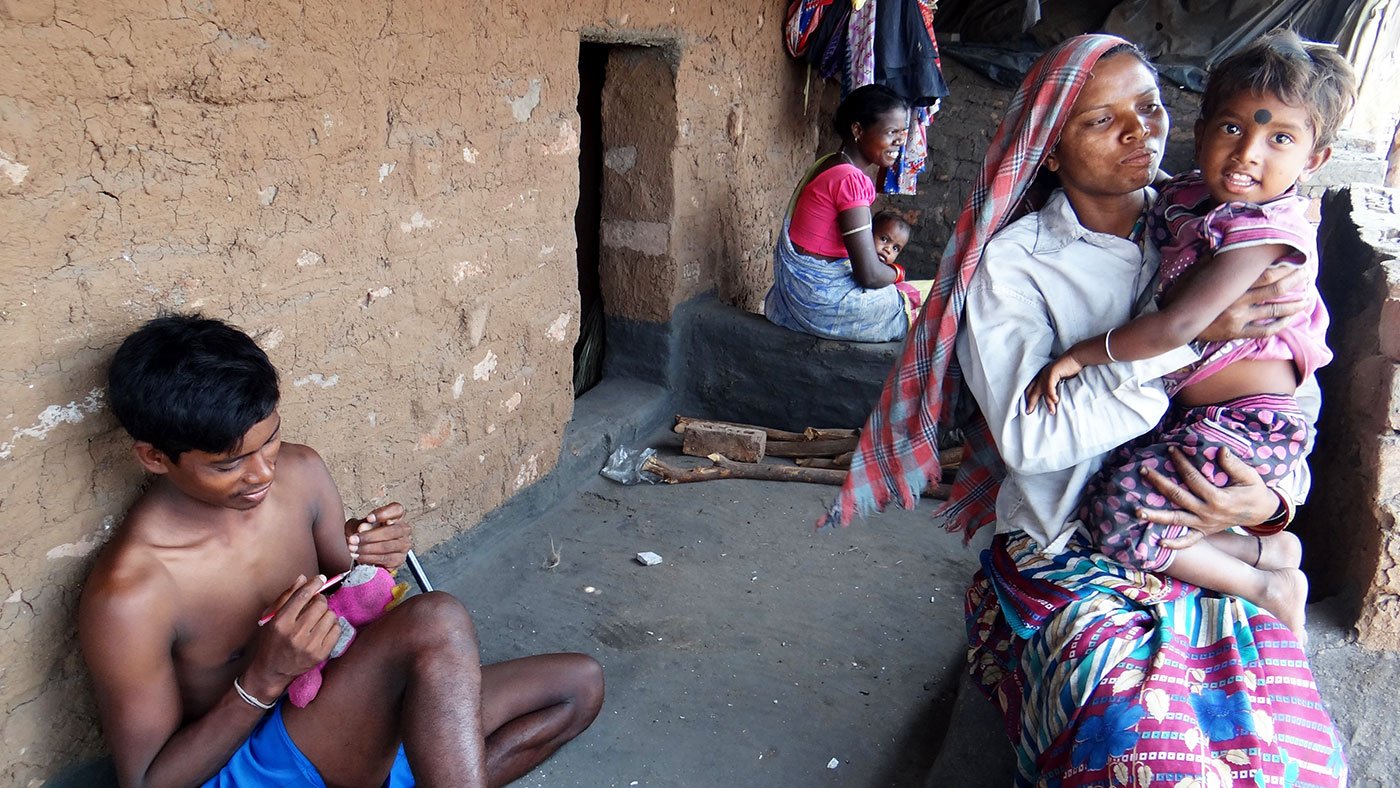 I met Netranand Sabar (sitting) and Raibari Bhoi (woman with a child, foreground) in Annaram village of Jinnaram block in Sangareddy district. They had come from Mahulkot village in Nuapada district. “We’ve been coming [to the kiln] for 18 years,” Bhoi said 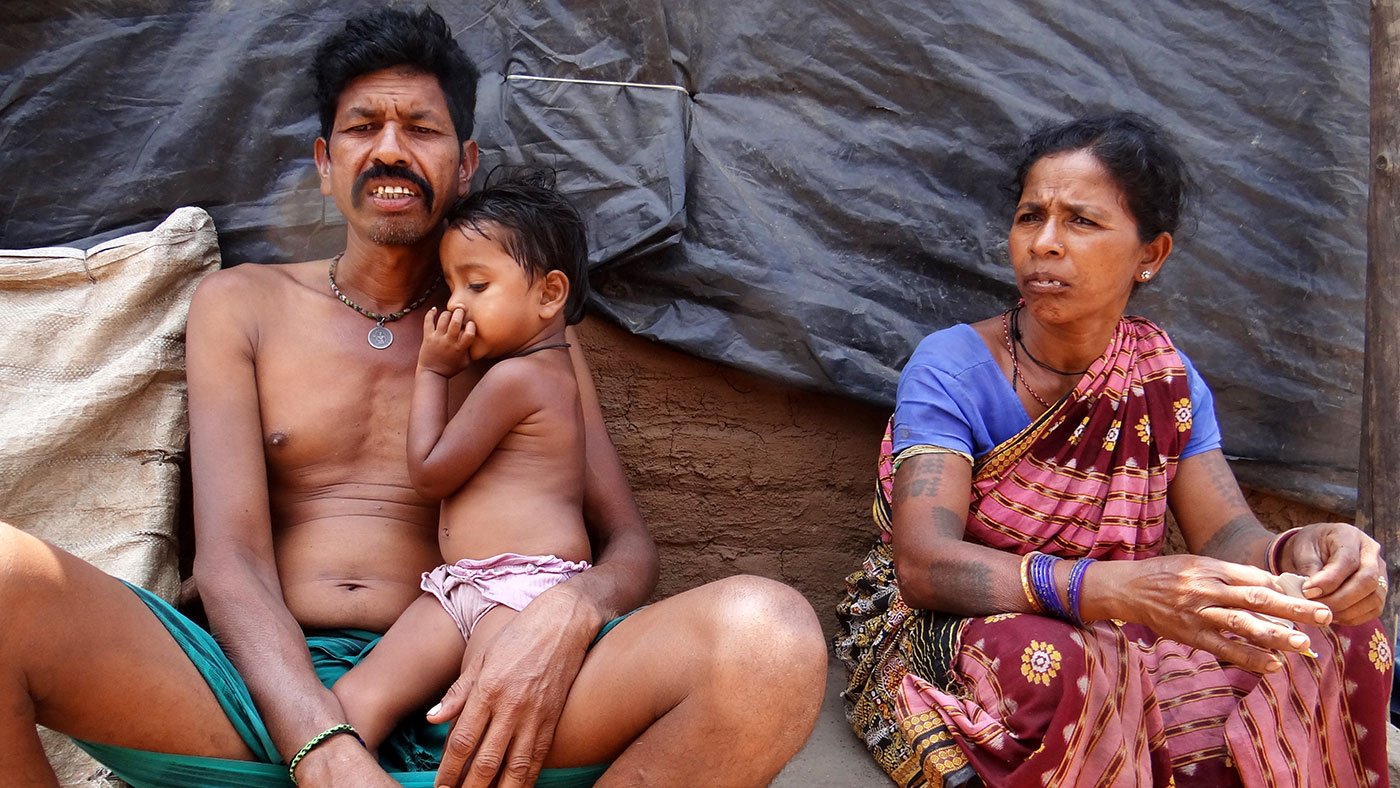 Remati Dharua and her husband Kailash are farmers from Pandrijor village in Belpara block of Balangir district. I met them in Annaram village of Sangareddy district. They had lost their crop due to drought and migrated to the kiln with their daughter, son-in-law, granddaughter (centre) and youngest son Himanshu, who has studied till Class 10 and was working here to meet the costs of college 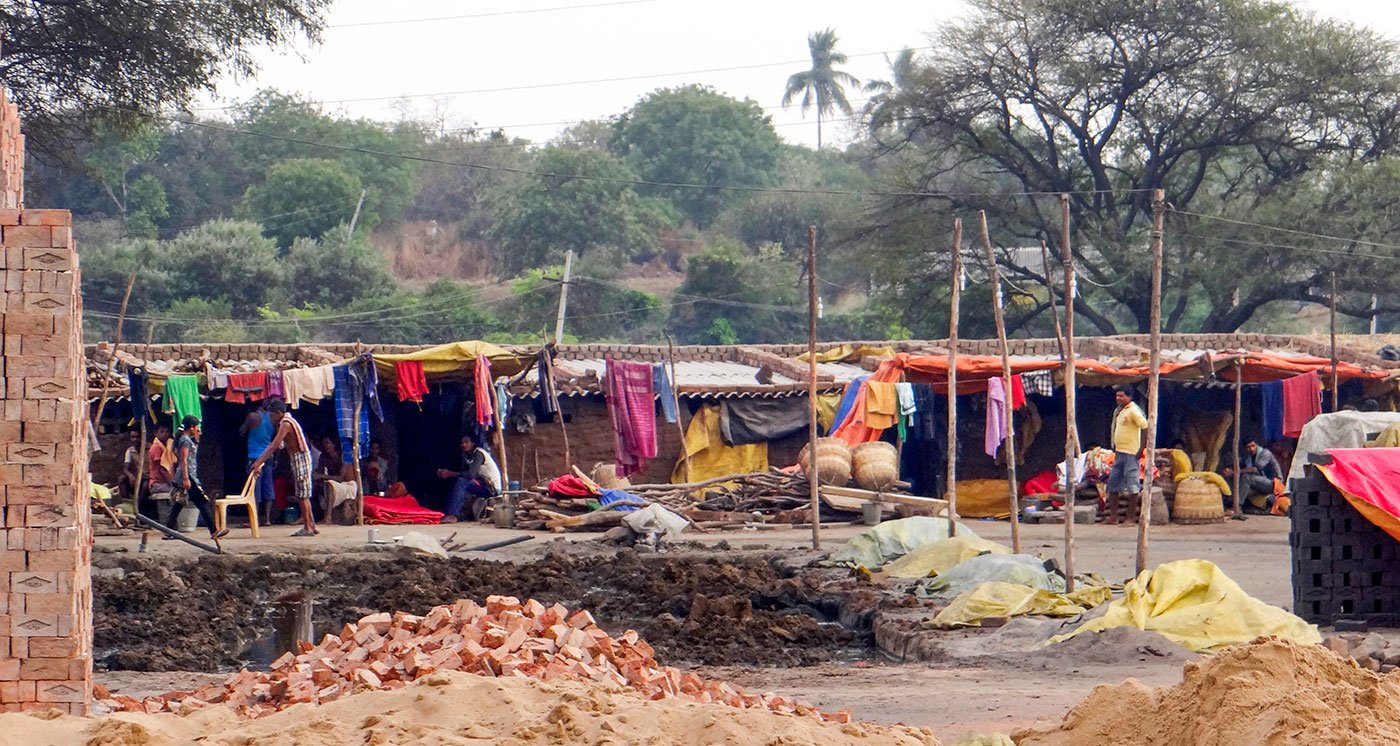 At a kiln in Domadugu village in Sangareddy district: For six months, the migrants live in temporary structures they build themselves, usually with raw or fired bricks from the kiln, and which they dismantle before leaving for their villages. The crammed-together sheds have no bathing area and a shortage of water, and the workers have little time or energy to keep the place clean 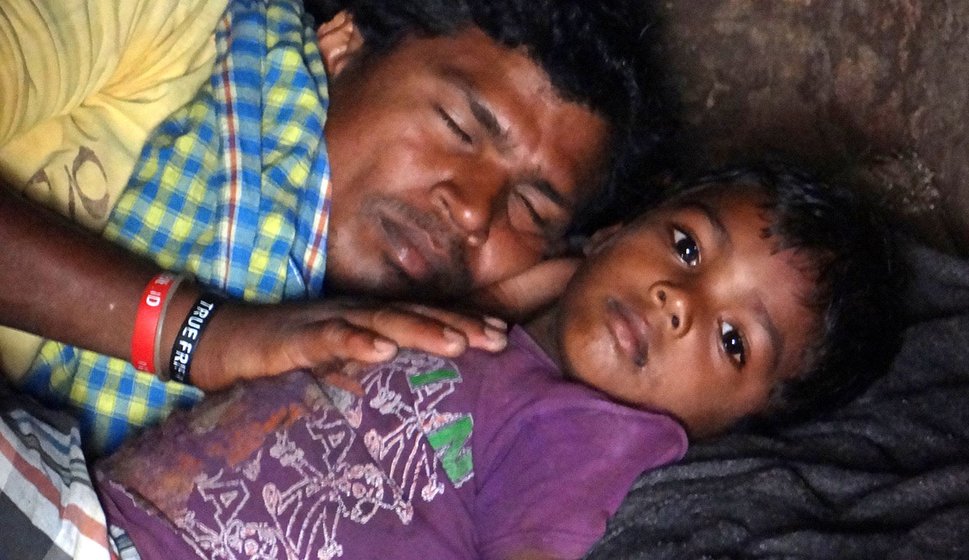 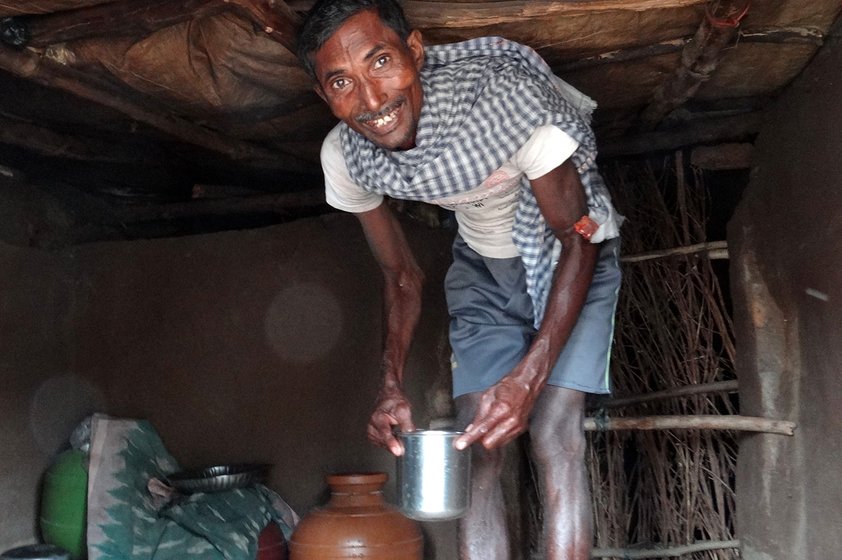 Left: In Annaram village of Sangareddy district: A labourer and his daughter inside their makeshift hut ; the family has come here from Sinapali block of Nuapada district. Right: In Domadugu village of Sangareddy district: A migrant labourer from Sinapali block carrying water into his tiny temporary home. The roof is so low that it's difficult to even stand inside 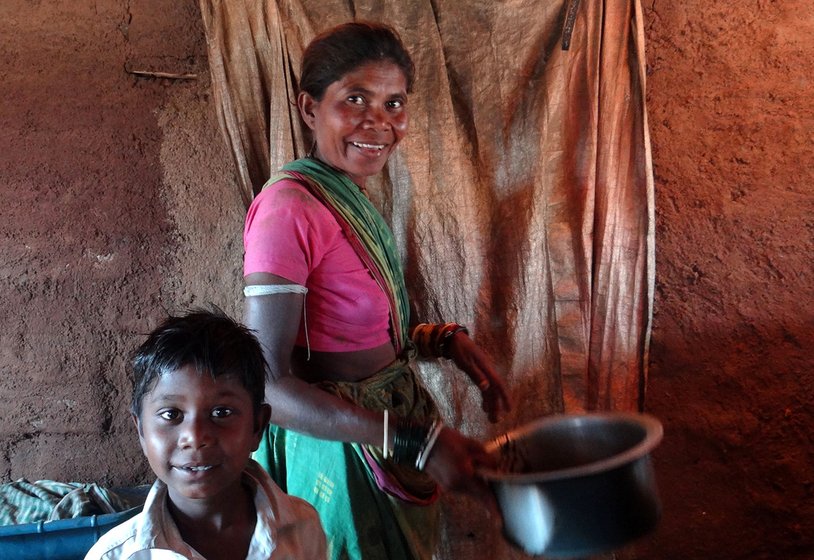 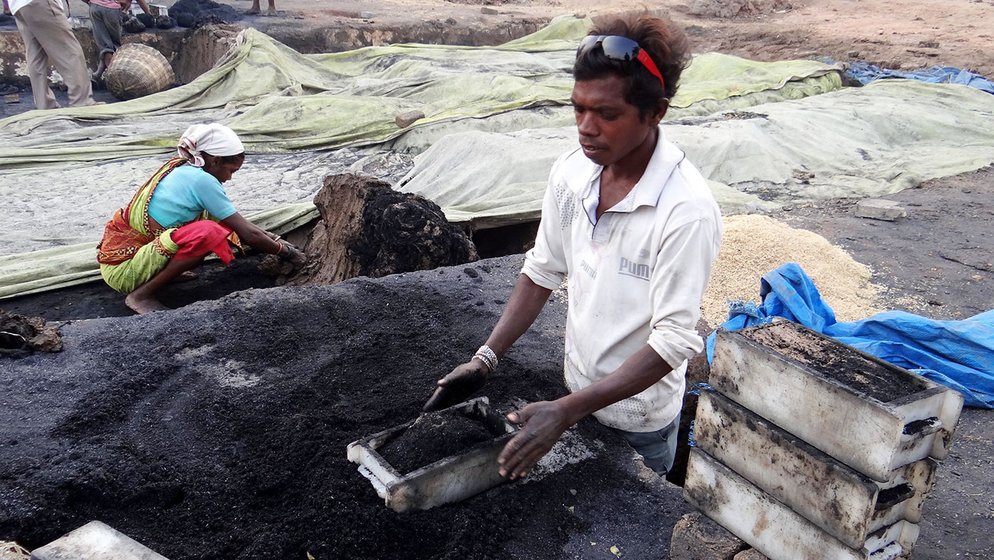 Left: Some of the children of brick kiln workers go to local government schools or anganwadis in Telangana, but learning is difficult without teachers who speak Odia. Often though, the kids work too with their parents at the kilns or look after the makeshift house. Six-year-old Naveen from Sargimunda hamlet of Nuapada district, who goes to a government primary school near the kiln, says, “I go to school here, but I love the school in my native village”

Right: In Domadugu village of Sangareddy district: working at the brick kilns is a family affair – couples usually migrate with their children. There is often no one to look after the kids back home, and at the kilns the children help with the work. The family starts work early in the morning, takes a break at 10 or 11 a.m., then resume at 3 or 4 p.m. and continue till 10 or 11 p.m. 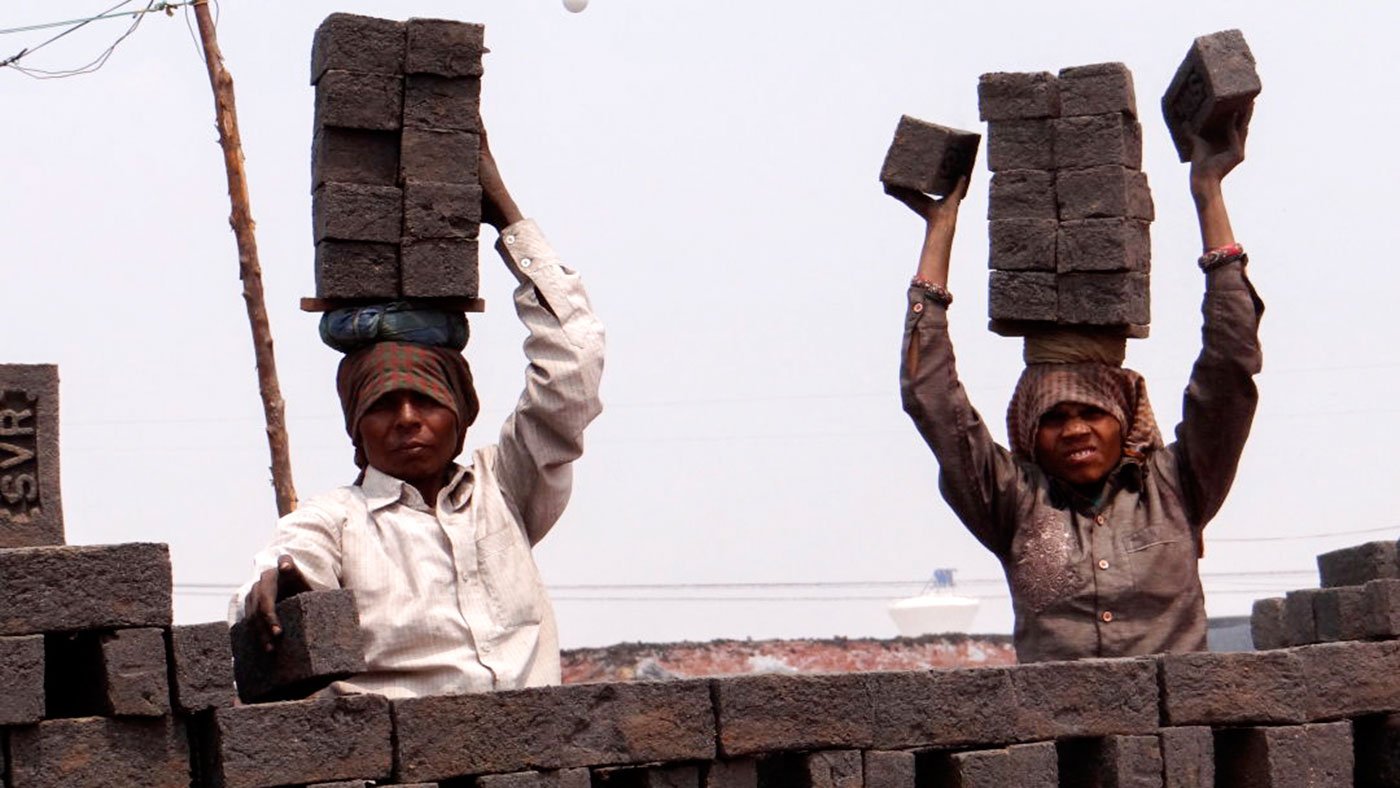 At a kiln in Kongara Kalan village in Ibrahimpatnam block of Rangareddy district: Migration is especially hard on women, children and the elderly. Women at the kilns work long hours despite many being malnourished 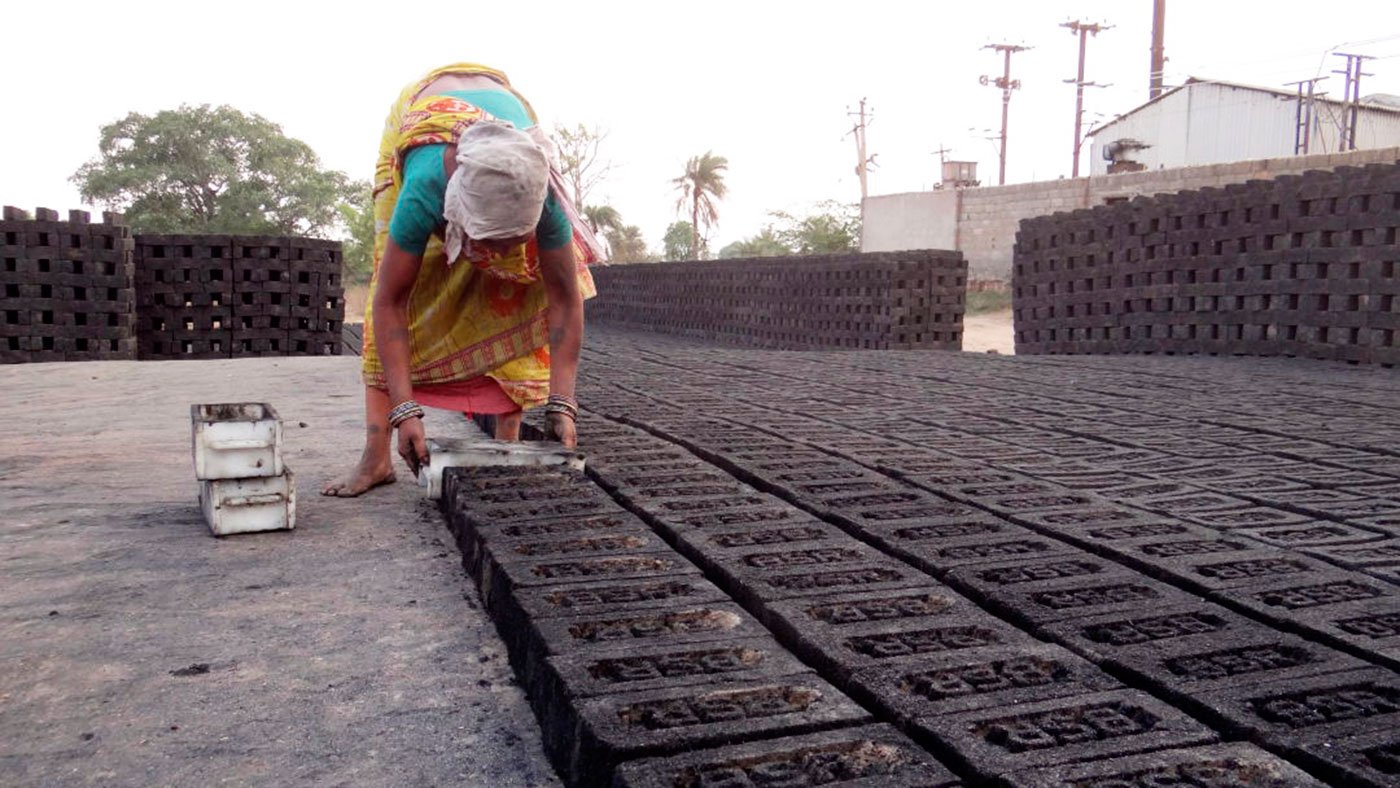 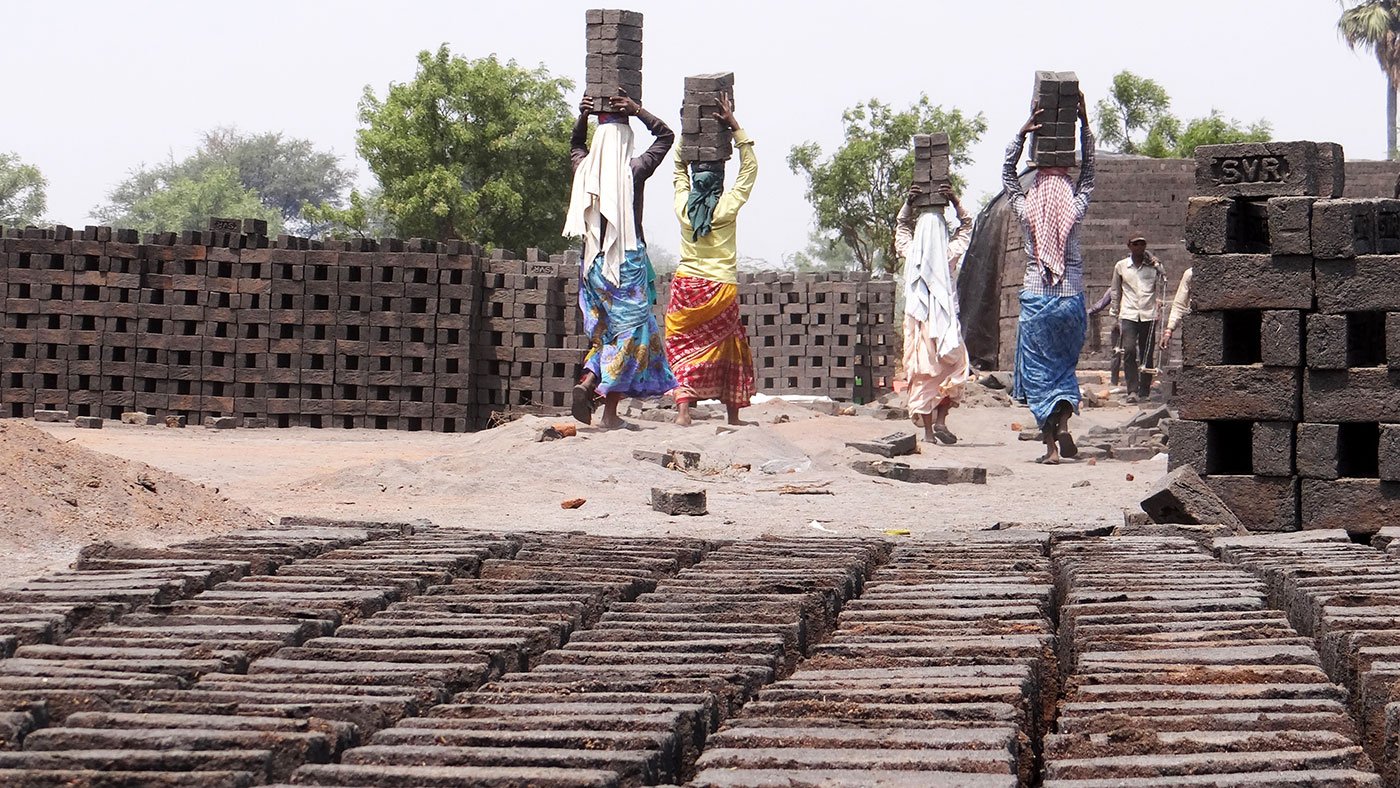 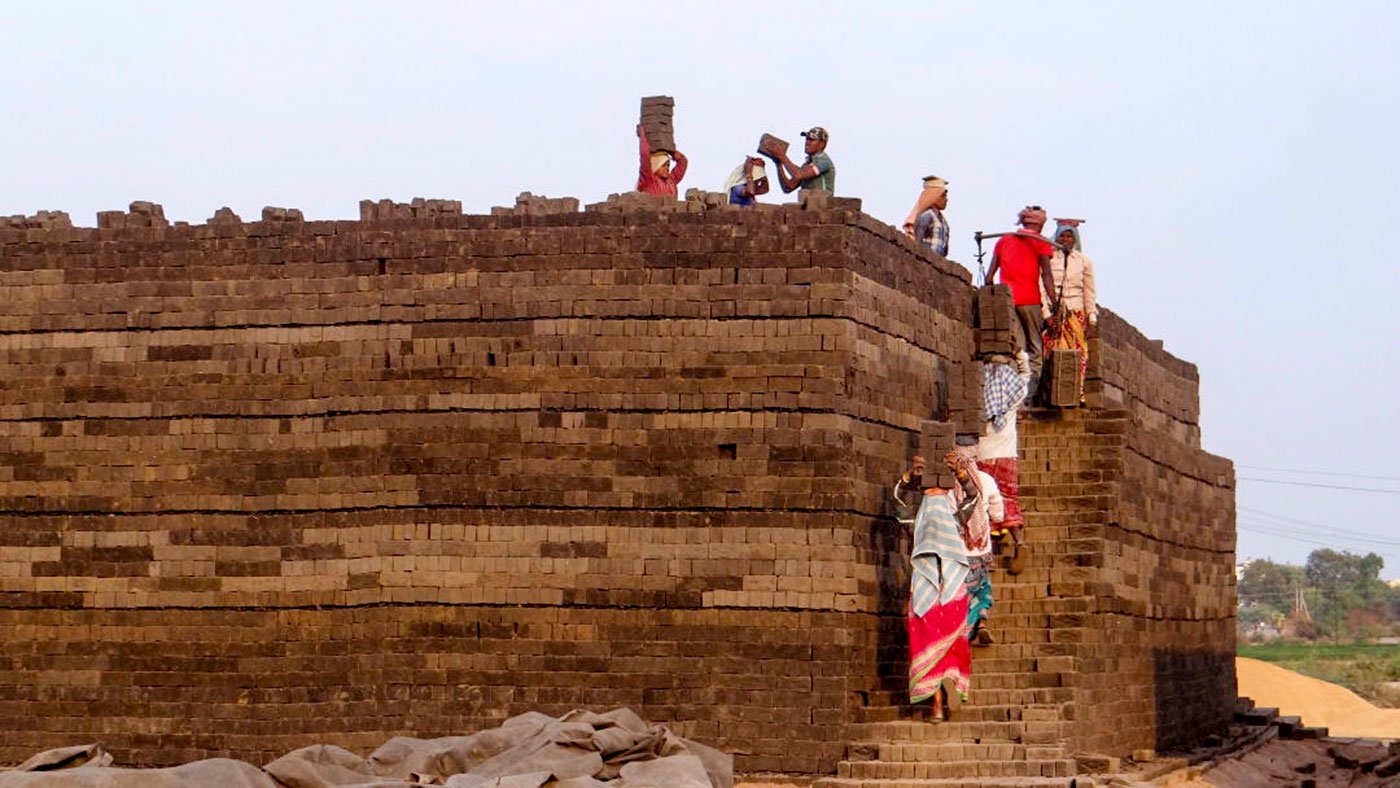 Each three-member family unit earns Rs. 220 to Rs. 350 for every 1,000 bricks. This amount depends on negotiations with the kiln owner or contractor. A group of workers can make between 100,000 to 400,000 bricks in around five months, depending on the number of extra helping hands available

Migrants from Kurumpuri panchayat of Nuapada district at the kiln in Annaram village of Sangareddy district. They were happy to hear that I too was from their district. One of the older men said, “After a long time I have met someone who speaks Odia. I am very happy to see you!” 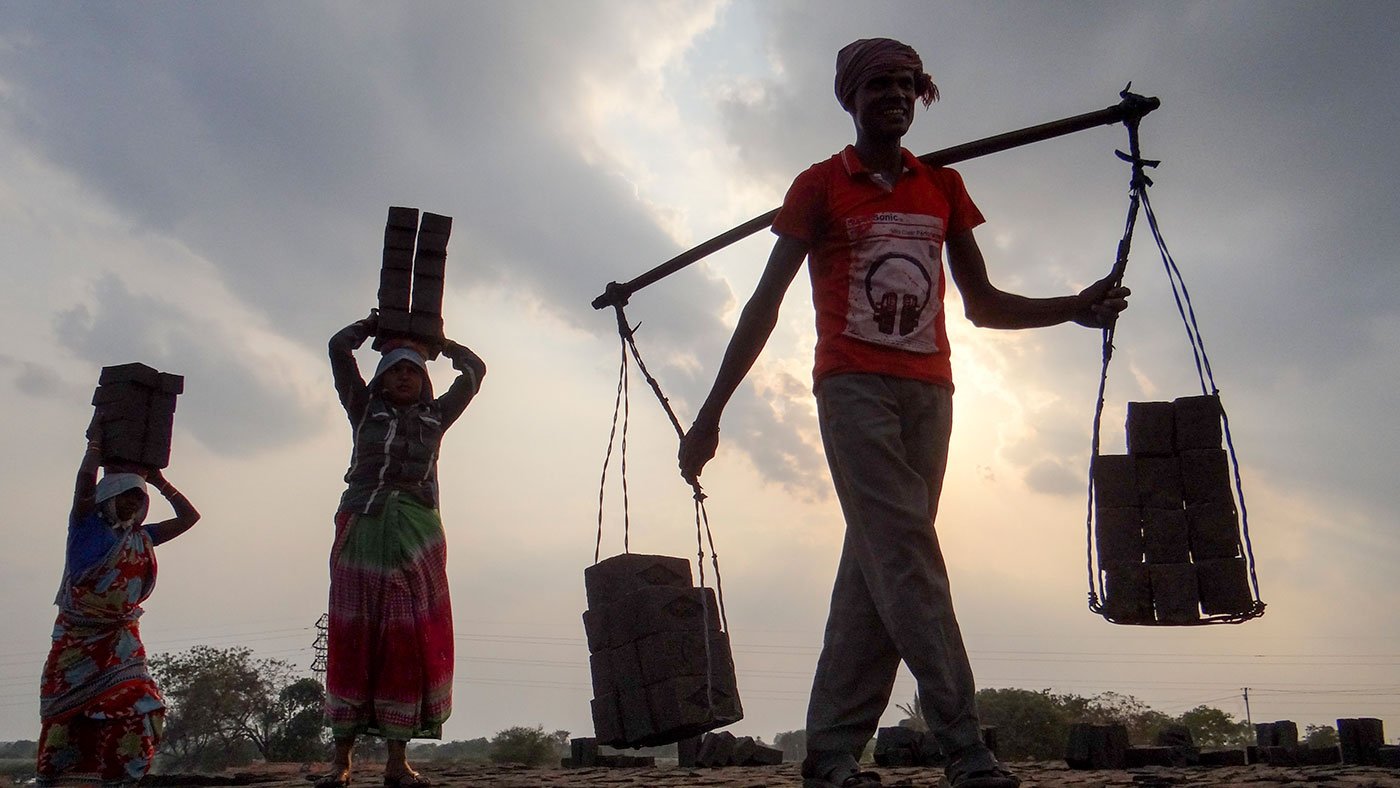 By December-January, contractors take the workers to the kilns. There they work till around June, and by the start of the monsoon return to their villages, where they work as farm labourers or on small plots of their own land