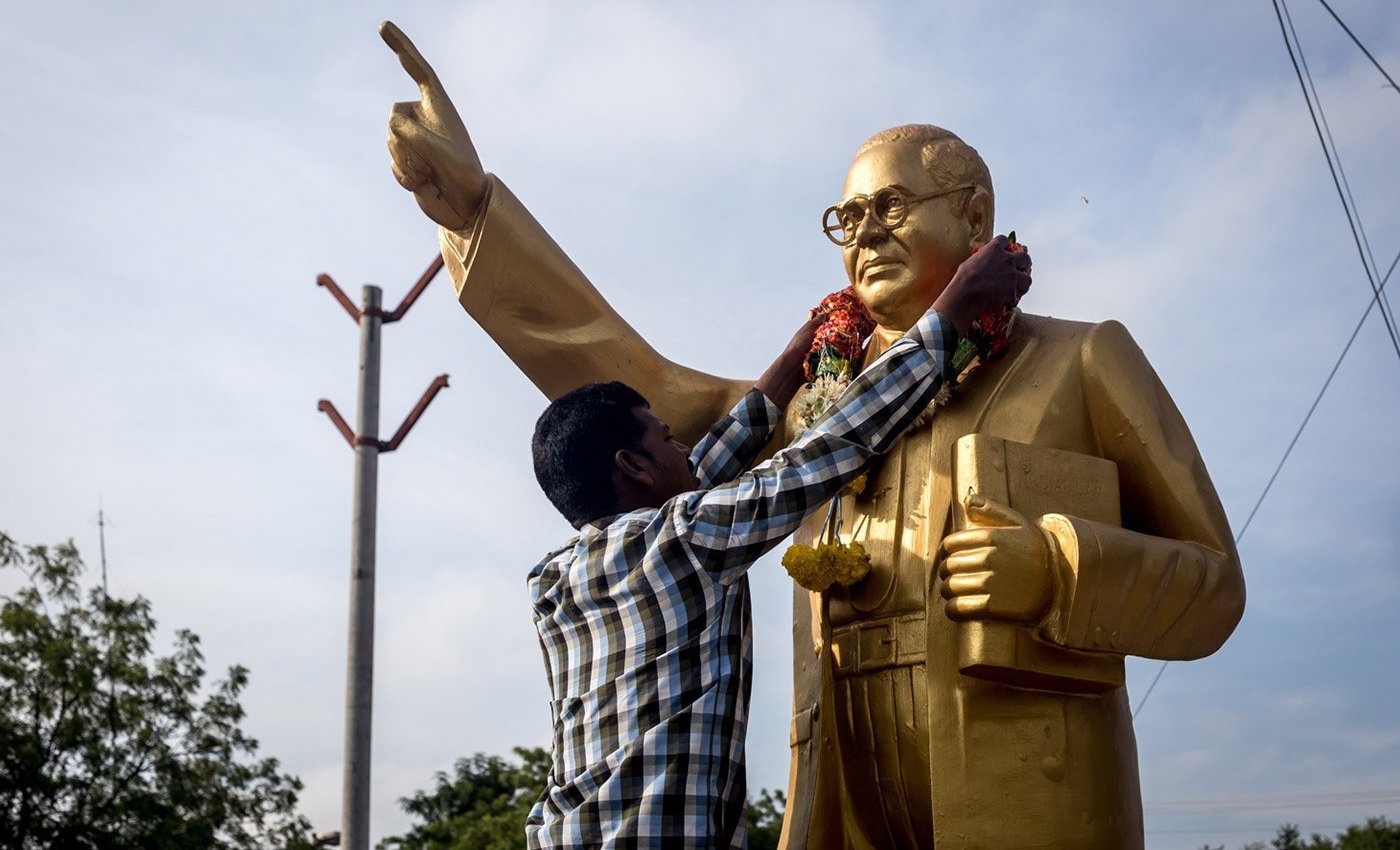 The garland on Anantapur’s Ambedkar statue

A new garland adorns Dr. Ambedkar’s statue in Anantapur nearly every day. At around 8:30 a.m., A. Subhan, a flower seller, climbs up the steps to the gold-painted statue with a garland of red roses or lilies woven by his family. Either Subhan or his 17-year-old nephew Bablu make sure this is done regularly.

The ritual started around 2010, after an old statue of Dr. Ambedkar, apparently in the way of traffic, was demolished and the present one came up. The statue is located around a kilometre south of the clock tower in the central part of Anantapur town in Andhra Pradesh, within walking distance of Subhan’s flower stall.

Other statues close by are rather less fortunate. The first after the clock tower, on the same stretch of road, is of Indira Gandhi. It is covered in jute cloth now, but has seen better days when the Congress was in power in Andhra Pradesh (from 2004 to 2014). In 2013, an earlier version of the statue was smashed and burned down by protesters opposing the bifurcation of Andhra Pradesh into Telangana. A new statue was later installed, but it continues to be shrouded. A statue of Rajiv Gandhi on this stretch is also covered. Perhaps these reflect the Congress party’s subdued fortunes in the state. 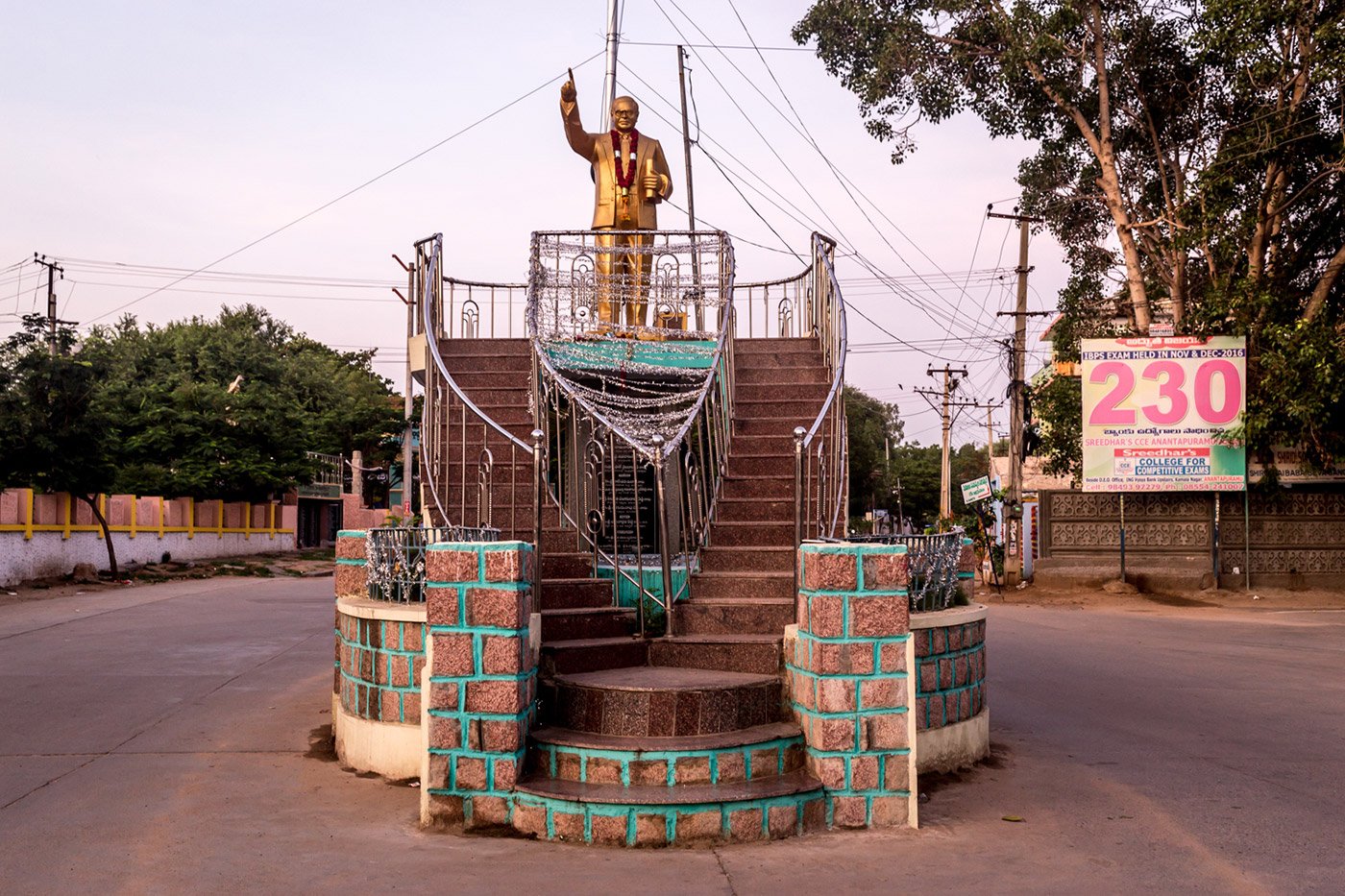 The numerous statues of historical figures and politicians in Anantapur town seem to be forgotten after commemorative events, but Dr. Ambedkar is remembered everyday

Several other statues stand on that road – Potti Sreeramulu (who died in 1952 fasting for a separate Telugu state of Andhra Pradesh), Maulana Abul Kalam Azad, Y. S. Rajashekhar Reddy, Bal Gangadhar Tilak, Babu Jagjivan Ram, Kanshi Ram and Mother Teresa. Occasionally, these too are garlanded. But their flowers soon start decaying, and the leaders seem to be forgotten after commemorative events. 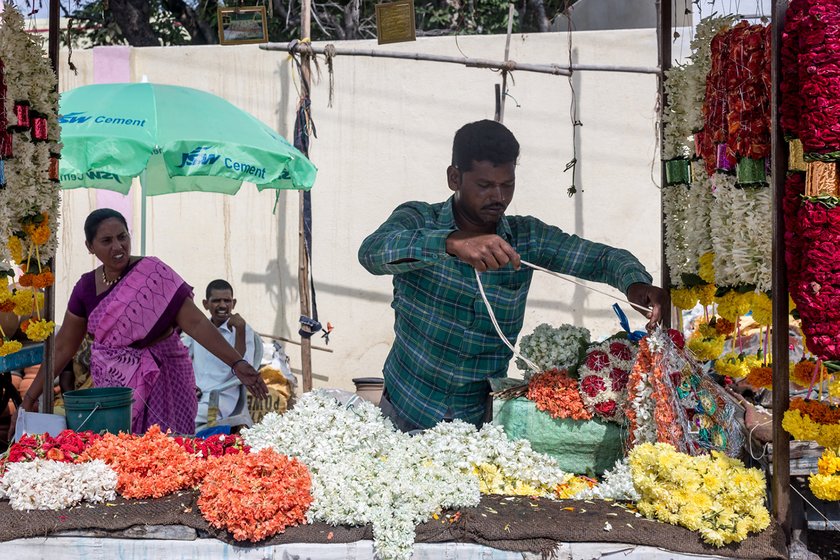 Subhan, whose flower shop is not far from the statue, says, 'We do it because we admire Ambedkar'

Babasaheb Ambedkar’s statue though is remembered every day. A. Mallesh, a cashier at an Andhra Bank branch near the clock tower, pays Subhan at the beginning of every month for the garlands. “He pays me 1,000 rupees,” 36-year-old Subhan, a Muslim, says. “We don’t make any profit, but we do it because we admire Ambedkar.” A garland in Subhan’s shop costs Rs. 60 to 130, depending on the flowers used.

Mallesh’s reverence for Dr. Ambedkar is rooted in his own experience of caste discrimination. “There was no food, no water, no oil for the head, no books to read, no slate to write on [in my village],” he says. “Now the god has provided us with everything – god meaning Ambedkar.” Mallesh is a Madiga Dalit from Atmakur village of Anantapur district. “In our village, there was only one well for drinking water,” he recalls. “We were only allowed to take water when the [land-owning] farmers came to draw water. Otherwise there was no water. Madigas couldn’t touch [the well].”

At school in Anantapur town, Mallesh and other children from Dalit and tribal communities had to sit at a corner of the classroom, while the upper caste students sat in the front. “We had to carry mud from outside [and spread it on the floor] for writing. We didn’t have slates,” he remembers. “If someone said ‘Hey Madiga! Take the mud out’ we had to throw it out.” The teacher too often insulted the Dalits by referring to their caste, and would beat them with palm canes.

Mallesh, now 59, had to drop out of the school after Class 7 to support his mother when his father, an agricultural labourer, died. He worked as a helper at a government hostel in Anantapur, and started applying for government jobs. In 1982, he found work as an attendant at Andhra Bank for a monthly salary of Rs. 500. By 1985, after an interview at the bank, he got a better-paid post as clerical assistant. 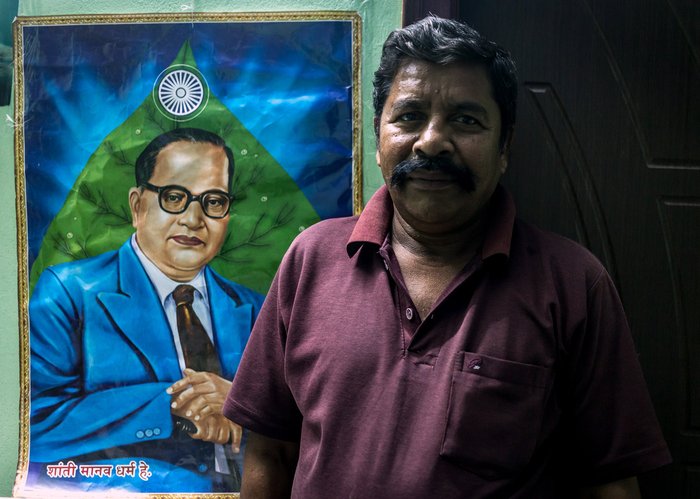 In 2010, while working as a clerical assistant at the bank, A. Mallesh decided 'just like that' to garland Dr. Ambedkar for as long as he could

'I can imagine the kind of hardships he would have faced, based on the hardships I experienced. We can learn just by looking at what he has done for us. Isn’t he the one who wrote our Constitution?'

Mallesh has also worked in various Dalit unions and organisations, and was until recently the zone-wide president of the SC & ST Employees Welfare Association at his bank. He has participated in various protests against caste discrimination. Around 1995, he recalls, he went on a 10-kilometre march from Anantapur to Alamur with left parties and other activists to protest an instance of caste discrimination. Mallesh was also the president of Dandora, a Dalit group formed in the 1990s, but moved out of it by the 2000s due to political differences.

Around 1996, Mallesh prepared for and passed his Class 10 exams. Eventually, this helped him move up from his clerical assistant’s post to his present job as a cashier in 2013 – which now pays him a salary many times more than his initial Rs. 500.

In 2010, while still a clerical assistant, Mallesh decided “just like that” to garland Dr. Ambedkar for as long as he could. He remembers a small informal meeting of bank employees and others from Dalit communities, where they volunteered to pool donations for the garlands. But Mallesh didn’t want to chase people for money every month, so he and M. Gopal, an attendant at another branch of Andhra Bank, decided to share the cost. Gopal stopped contributing last year and now only Mallesh pays for the garlands. 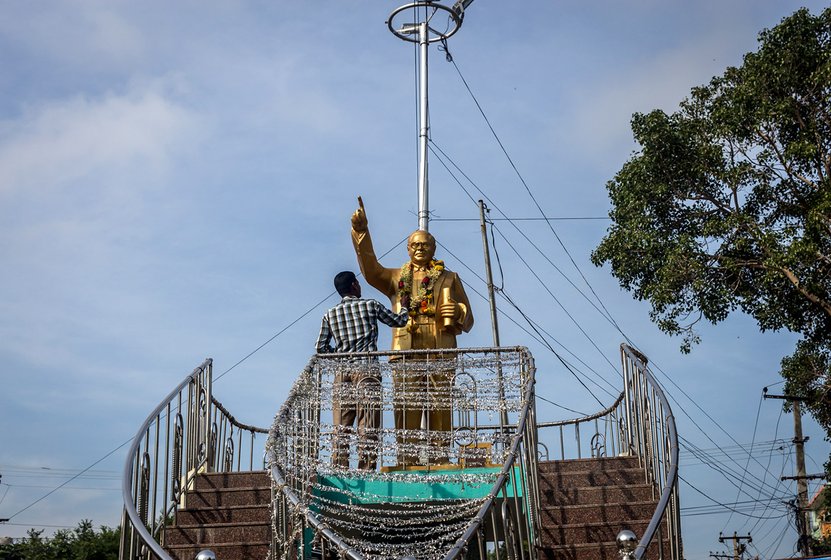 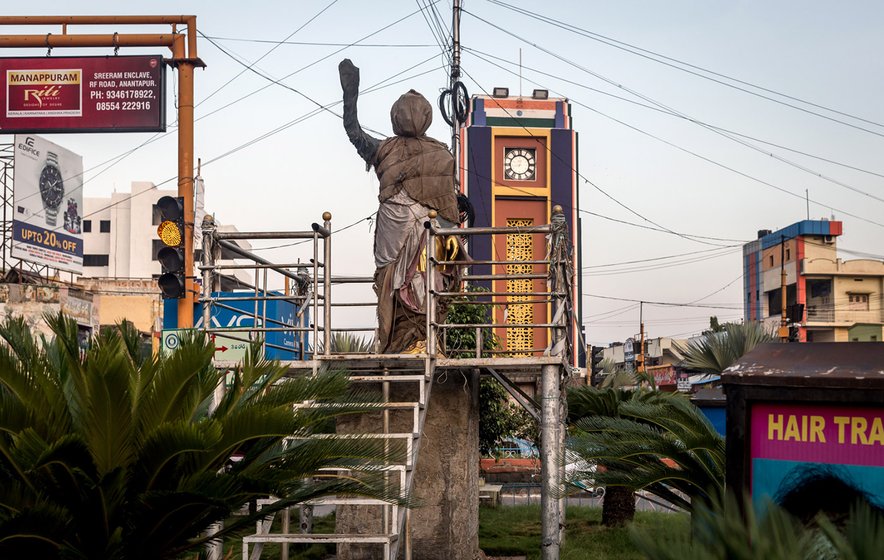 While Subhan garlands the Ambedkar statue early every morning (left), the statue of Indira Gandhi (right) has for long remained wrapped in jute cloth

Mallesh doesn’t like reading or being lectured about Ambedkar. He says he learnt about Ambedkar by just living the life of a Dalit: “I can imagine the kind of hardships he would have faced, based on the hardships I experienced. We can learn just by looking at what he has done for us. Isn’t he the one who wrote our Constitution?”

On weekends or festival days Mallesh sometimes garlands the statue himself. He is planning to petition the district administration to install a shade to protect it from sunlight, wind and bird droppings. “First we will try to get it for Ambedkar," he says, "then we will ask the same for Jagjivan Ram and then for Kanshi Ram.”

Although the flowers on Dr.  Ambedkar’s statue might not be noticed by many in Anantapur, the sweepers who clean the roads in the early mornings know about it. “Someone, probably someone big, garlands the statue every day. I don’t know who does it,” says G. Ramalakshmi, a Dalit woman employed by the town’s municipal corporation to clean the streets. As she says this, she touches her fingers to either side of her chin, in a gesture of devotion, “When I see the statue with the garland I think that the god [Ambedkar] is doing well. We pray to him while coming to work every day.”