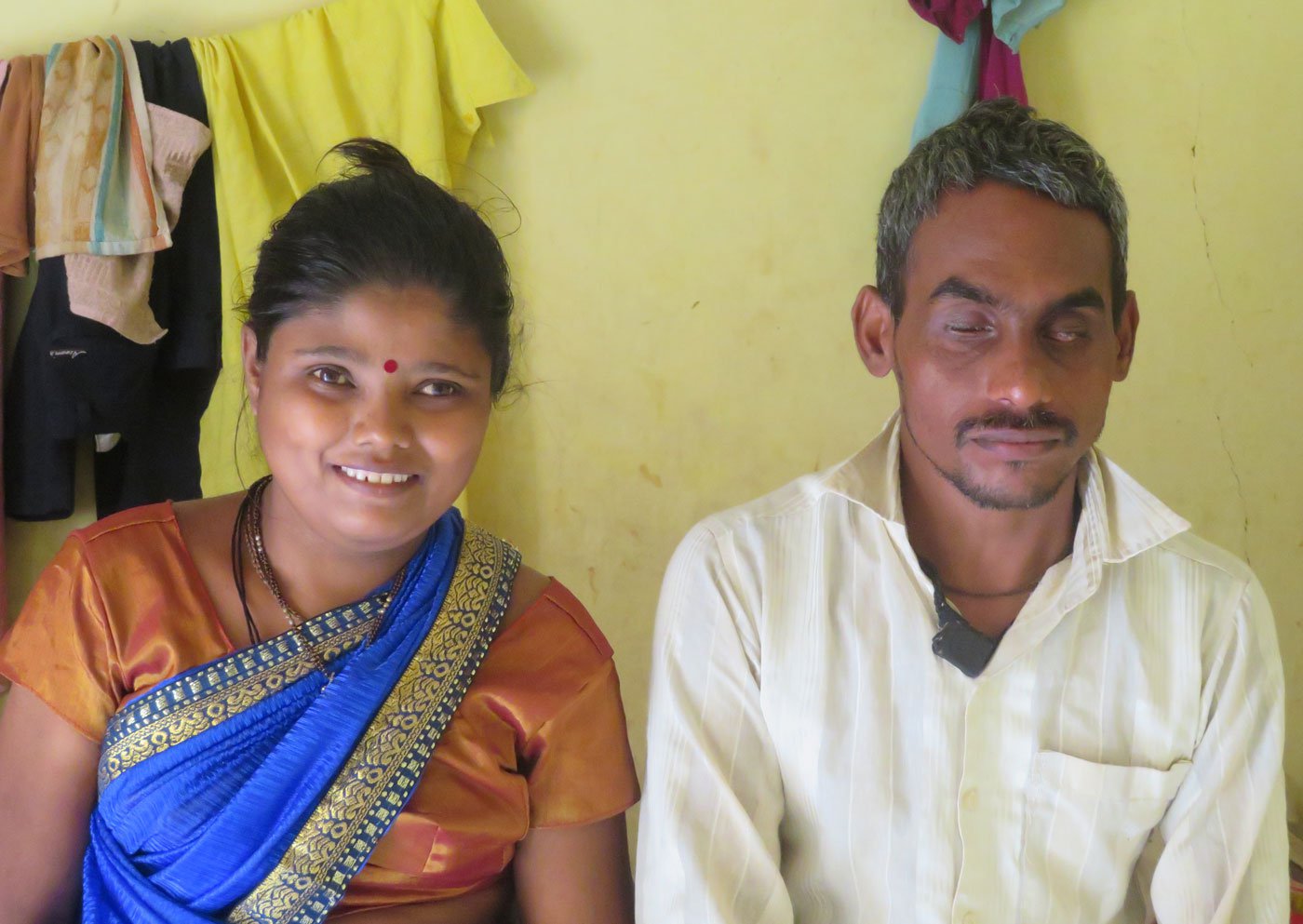 When free treatment comes at a hefty price

Archana and her husband travel three times a week for her dialysis at a government facility. The treatment is free, but the travel costs of the couple and the loss in earnings is wearing them down

It is noon and it has just stopped drizzling in Maharashtra’s Ulhasnagar taluka.

An auto rickshaw drives up to the entrance of Central Hospital Ulhasnagar in Thane district. Holding a white-and-red cane in his left hand, Dnyaneshwar gets out of the rickshaw. His wife Archana follows him, holding onto Dnyaneshwar’s shoulder, her slippers splashing in the muddy water.

Dnyaneshwar draws two notes of Rs. 500 each from his shirt pocket and hands one of them to the rickshaw driver. The driver returns some change. Dnyaneshwar touches the coin. “Five rupees,” he says as he puts the coin into his pocket, carefully feeling it drop. The 33-year-old lost his vision to a corneal ulcer when he was three.

A one-way rickshaw ride for a dialysis session for Archana at the Ulhasnagar hospital – 25 kilometres from their home in Vangani town in Ambarnath taluka – costs the couple Rs. 480-520. “I borrowed 1,000 rupees from my friend [for this trip],” says Dnyaneshwar. “I have to borrow money every time [we travel to the hospital].” The couple begins walking, with slow, cautious steps, towards the dialysis room on the second floor of the hospital.

Archana, who is partially blind, was diagnosed with chronic kidney disease in May this year at Mumbai’s Lokmanya Tilak Municipal General Hospital. “Both her kidneys have failed,” says Dnyaneshwar; 28-year-old Archana needs haemodialysis three times a week.

“Kidneys are essential organs of the body – they remove waste and excess body fluid from your system. When they fail, a person needs dialysis or a transplant to stay alive,” says Dr. Hardik Shah, a nephrologist at Central Hospital Ulhasnagar. Every year, India reports around 2.2 lakh new patients of End Stage Renal Disease (ESRD), creating an additional demand for 3.4 crore dialysis procedures. 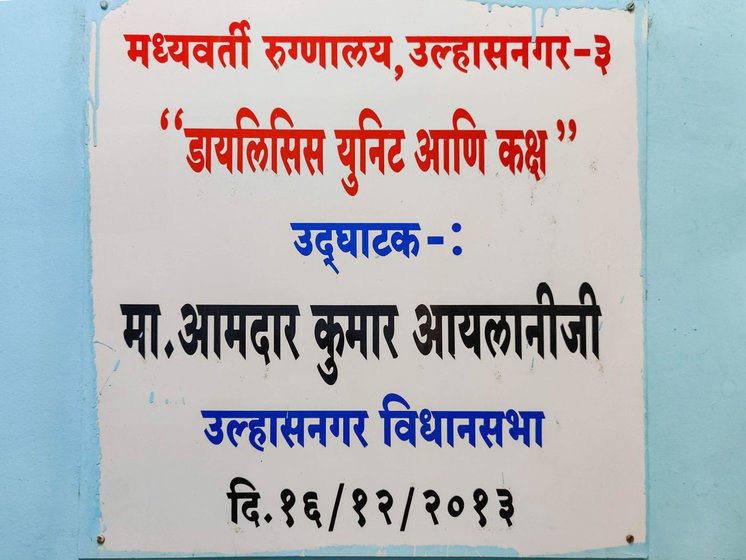 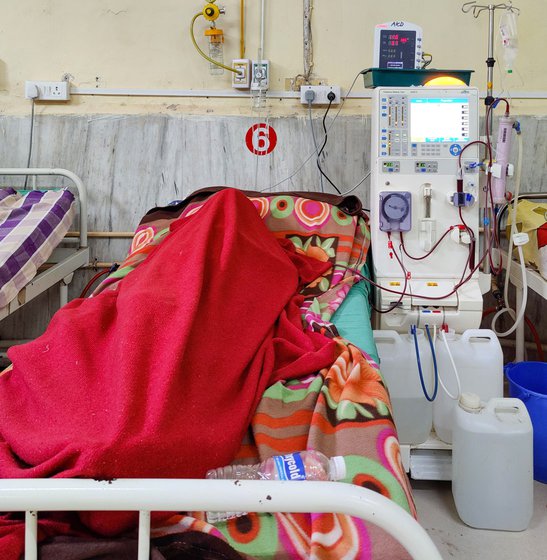 Archana receives dialysis at the Ulhasnagar hospital under the Pradhan Mantri National Dialysis Programme (PMNDP) launched in 2016 with the objective of providing free dialysis to below poverty line (BPL) patients whose kidneys have failed. The service is delivered at district hospitals in the country.

“Dialysis does not cost me anything, but the travel expenses are difficult to manage,” says Dnyaneshwar, who is forced to borrow money from friends and neighbours to pay for the autorickshaw for each visit to the hospital for Archana’s dialysis. Travelling by a local train, although an affordable option, is not safe. “She is very weak and cannot climb stairs at the station,” he says. “I am blind, else I would have carried her in my arms.”

Archana and Dnyaneshwar travel a total of 600 kilometres every month for her 12 dialysis sessions at the government-run facility in Ulhasnagar.

A 2017 study mentions that almost 60 percent of Indian patients on dialysis travel more than 50 kilometres to access haemodialysis, and nearly a quarter live more than 100 kilometres away from the facility.

India has approximately 4,950 dialysis centres, most of them in the private sector. The PMNDP is being implemented through 1,045 centres in 569 districts of 35 states and Union territories. A total of 7,129 haemodialysis machines are being used for the programme, says a government report. 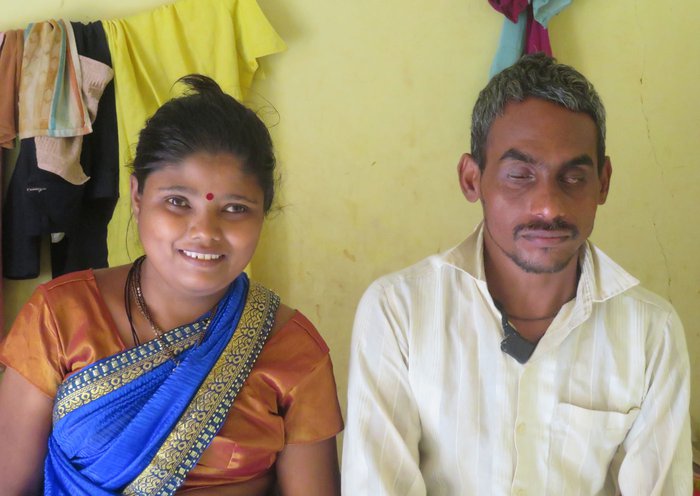 Archana and Dnyaneshwar at their home in Vangani in 2020

'Archu needs dialysis all her life. I don't want to lose her', Dnyaneshwar whispers, sitting on a metal bench outside the air-conditioned dialysis room where his wife is getting her four-hour treatment

Vangani town, where Archana and Dnyaneshwar live, has no government-run hospital. On the other hand, the 2021 District Social and Economic Review says, there are around 71 private hospitals in Thane.  “Some private hospitals are [only] 10 kilometres away from our home, but they charge 1,500 rupees for one session,” says Dnyaneshwar.

Therefore, Central Hospital Ulhasnagar, 25 kilometres away, becomes the first option not only for Archana’s dialysis but also for any medical emergency in the family. Dnyaneshwar narrates the sequence of events that led them to the hospital.

On April 15, 2022, Archana complained of dizziness and a tingling sensation in her feet. “I took her to a local private clinic, where she was given some medicines for weakness,” he says.

However, her health deteriorated on the night of May 2 as she developed chest pain and fell unconscious. “She was not moving. I was very scared,” says Dnyaneshwar, who recalls wandering from one hospital to another in a hired four-wheeler to get help for Archana.

“I first took her to Central Hospital Ulhasnagar, where they immediately put her on oxygen. Later, they asked me to take her to Chhatrapati Shivaji Maharaj Hospital in Kalwa [27 kilometres from Ulhasnagar] as her condition was very serious,” he says. “But when we reached the Kalwa hospital, we were told there was no free ICU bed; they sent us to Sion Hospital.”

That night Archana and Dnyaneshwar covered nearly 78 kilometres in a hired cab and spent Rs. 4,800 to get emergency medical care. There has been no let-up since then.

Archana and Dnyaneshwar, originally from Aurangabad district in Maharashtra, are among 22 per cent of India’s population that lives below the poverty line, says a report published by the Planning Commission in 2013. Following Archana’s diagnosis, the couple is further burdened by what is called ‘catastrophic healthcare expenditure’, which is defined as expenses that exceed 40 per cent of monthly non-food spending. 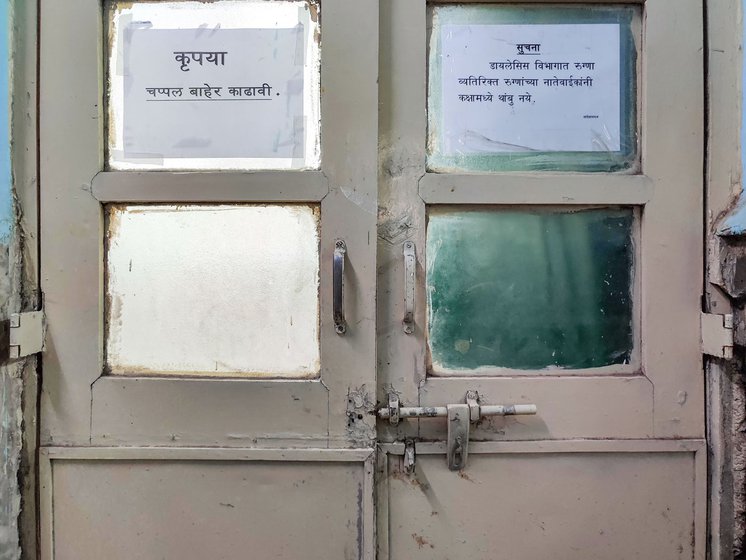 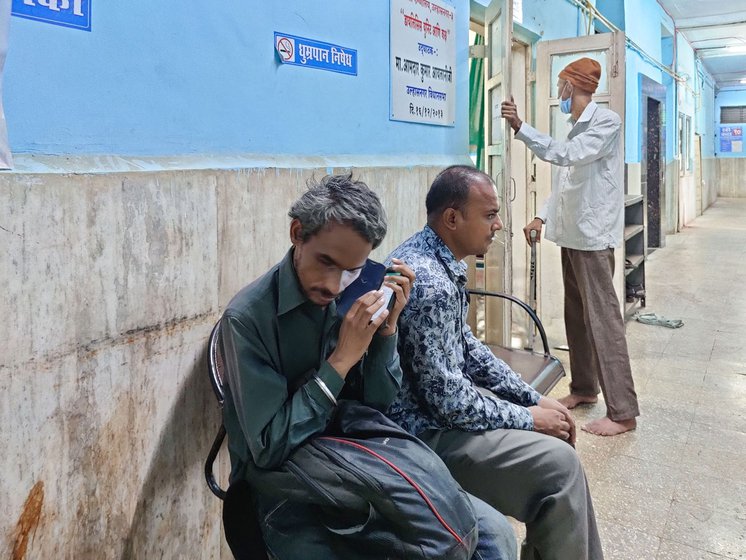 Left: The door to the dialysis room prohibits anyone other than the patient inside so Dnyaneshwar (right) must wait  outside for Archana to finish her procedure

Meanwhile, their income has only declined. Prior to Archana’s illness, on a good day the couple would earn around Rs. 500 from selling files and card holders outside Thane railway station, 53 kilometres from Vangani. On other days, that amount would be around Rs. 100. There were days when they earned nothing. “We earned only around 6,000 rupees a month – not more than that,” says Dnyaneshwar. (Also read: Seeing ‘the world through touch’ in a pandemic )

The modest and unstable income just about covered their monthly house rent of Rs. 2,500 and other household expenditure. Archana’s diagnosis has wielded a heavy blow to their already precarious finances.

With no family nearby to take care of Archana, Dnyaneshwar is unable to step out to work. “She is very weak,” he says. “She cannot even move around the house or use the toilet without support.”

Meanwhile, the debts are mounting. Dnyaneshwar has already borrowed Rs. 30,000 from friends and neighbours; two months of rent is overdue. Managing travel expenses to continue Archana’s dialysis is a constant worry for the couple. The only steady source of income is a Rs. 1,000 monthly pension under the Sanjay Gandhi Niradhar Pension Scheme.

“Archu needs dialysis all her life,” Dnyaneshwar whispers, sitting on a metal bench outside the air-conditioned dialysis room where his wife is getting her four-hour treatment. “I don’t want to lose her,” he says, his voice quivering as he leans back to rest his head against a wall covered in paan stains.

Like large numbers of India’s population, Archana and Dnyaneshwar are reeling under the burden of high out-of-pocket expenditure (OOPE) in accessing healthcare services. According to the 2020-21 Economic Survey, India has “one of the highest levels of OOPE in the world, contributing directly to the high incidence of catastrophic expenditures and poverty.” 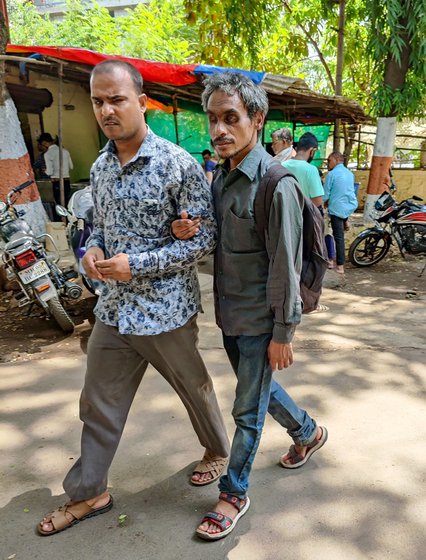 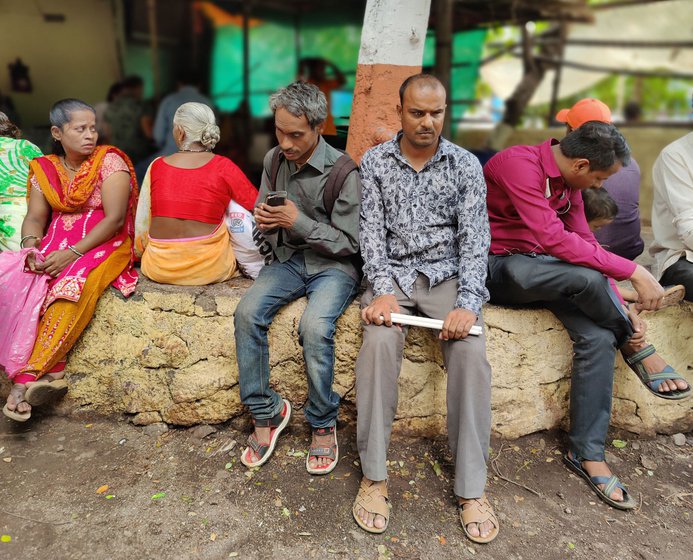 Left: When Archana goes through her four-hour long dialysis treatment, sometimes Dnyaneshwar steps outside the hospital. Right: Travel expenses alone for 12 days of dialysis for Archana set the couple back by Rs. 12,000 a month

“Access to dialysis care is insufficient in rural areas. Under the PMNDP, centres must be set up at sub-district levels, with a capacity of three beds each,” says Dr. Abhay Shukla, national co-convenor of the Jan Swasthya Abhiyan.  “And the government should reimburse the transportation expense to the patient.”

High out-of-pocket expenditure has other impacts on the patient. For example, it restricts spending on a suitable diet. Archana has been asked to eat nutritious meals and occasionally include fruits in her diet.  However, even a single meal a day is becoming a challenge for the couple. “Our landlord gives us lunch or dinner; sometimes my friend sends some food over,” says Dnyaneshwar.

Some days they get no food.

“How to ask [outsiders] for food? So, I try to cook,” says Dnyaneshwar, who has never cooked before. “I bought rice, wheat flour and some dal [lentils] to last a month.” Lying in her bed, Archana gives him instructions on the days that he has to cook for them.

Patients like Archana, doubly burdened by disease and high costs of accessing medical care, point to an urgent need to improve population coverage of healthcare services and drastically reduce patients’ out-of-pocket expenditure. In 2021-22, public health expenditure was at 2.1 per cent of the country’s GDP. The 2020-21 Economic Survey suggested that “an increase in public health spend from 1 per cent to 2.5-3 per cent of GDP – as envisaged in the National Health Policy 2017 – can decrease the OOPE from 65 per cent to 30 per cent of overall healthcare spend.”

Archana and Dnyaneshwar have no understanding of these economic terms and recommendations. They just want to go home after a long, expensive trip for Archana’s dialysis. He leads her out of the hospital, gently holding her arm, and hails an autorickshaw. He quickly checks his pocket for the Rs. 505 left over from the morning’s journey.

“Do we have enough [money] to reach home?” asks Archana.

Sangeeta Menon is a Mumbai-based writer, editor and communications consultant.

Other stories by Sangeeta Menon