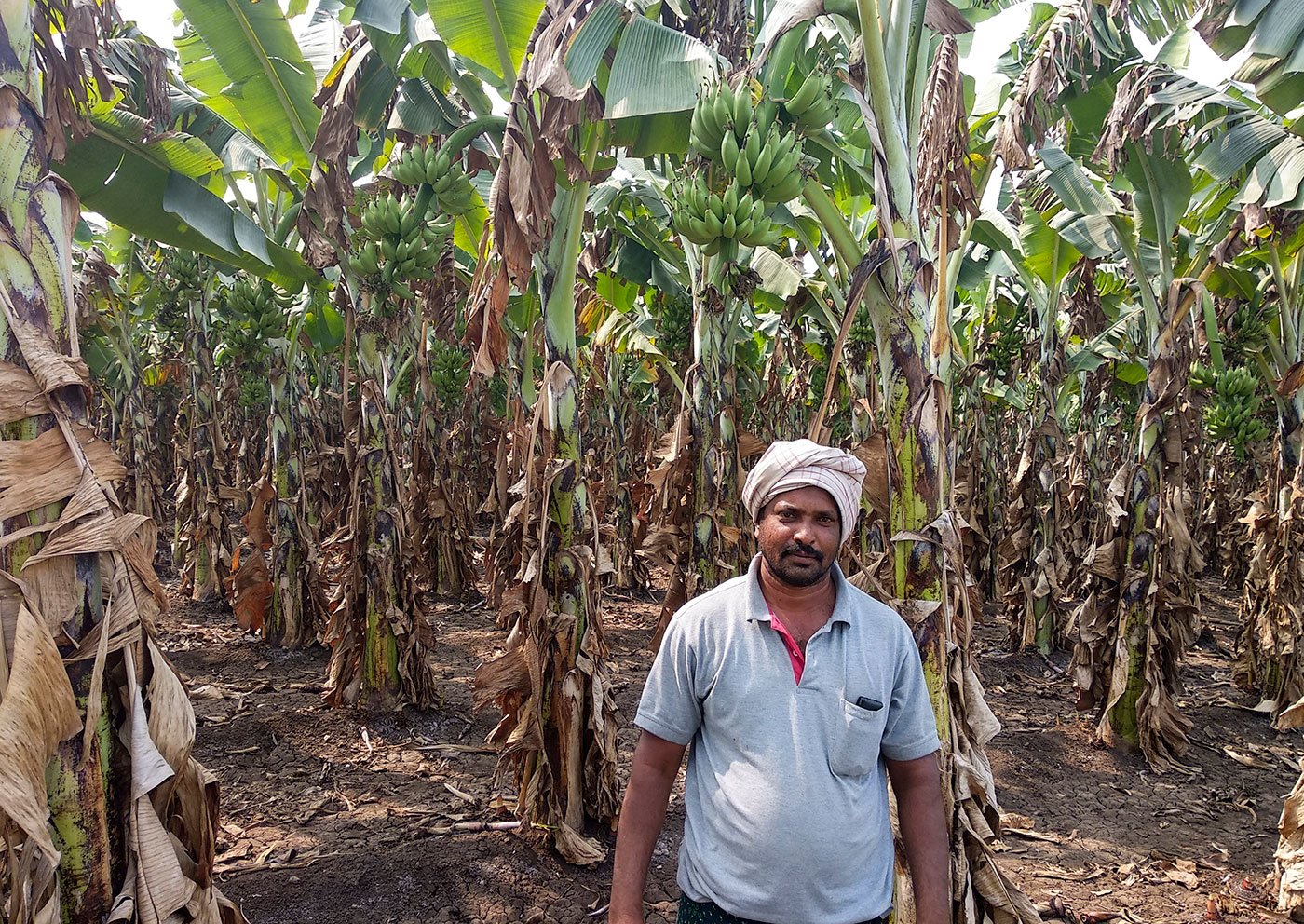 Amaravati, the mega-city coming up in Andhra amid grand claims by the government, will displace thousands of farmers from fertile land. While many are resisting, others are giving in to land pooling schemes

Our conversation begins with the basics. Siva Reddy, 62, from Penumaka village in Guntur district, tells me, “I own five acres of land. On three acres, I grow banana, ivy gourd on two acres, onion on one acre…” That would mean you have six acres and not five, I ask.

Siva smiles. His friend and fellow farmer, Sambi Reddy, 60, who has been listening intently to us, says, “He owns around 10 acres. We don’t tell the truth [about our land] because we are not sure who is who. We don’t know who you will give this information to and what they will do with it.”

But this isn’t the usual suspicion of journalists or officials. “We have been living in fear and uncertainty ever since the [new] capital was announced,” Sambi Reddy says. “Many times in the past too, we have been backstabbed by our own people when they passed on information to the state government and real estate companies.”

Siva and Sambi are fearful that they will have to give up their land for the construction of Andhra Pradesh’s new riverfront capital, Amaravati. In September 2014, the government announced plans to acquire farmland in 29 villages on the north bank of the Krishna river for this new ‘greenfield’ capital. Siva’s village is one of them.

Hyderabad will remain the capital of both Andhra Pradesh and Telangana for 10 years (after the state bifurcation in 2014). So by 2024, phase I of the new capital will be complete, the Andhra Pradesh Capital Region Development Authority (APCRDA), has said in various press releases. Phase II is scheduled to be complete by 2030 and phase III by 2050.

The state is promoting the new capital as a ‘world-class’ city. In January 2018, at the conclusion of the Amaravati Marathon in Vijayawada, chief minister Chandrababu Naidu reiterated, “Amaravati is a people’s capital and will be in the top five cities of the world.” 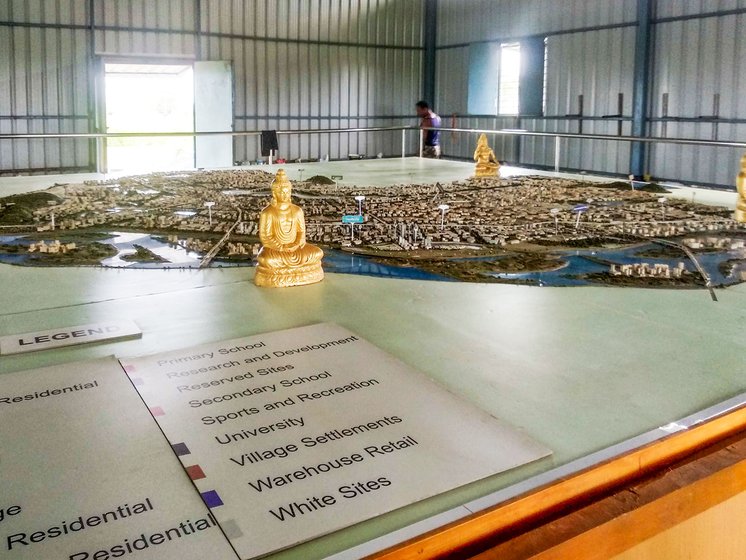 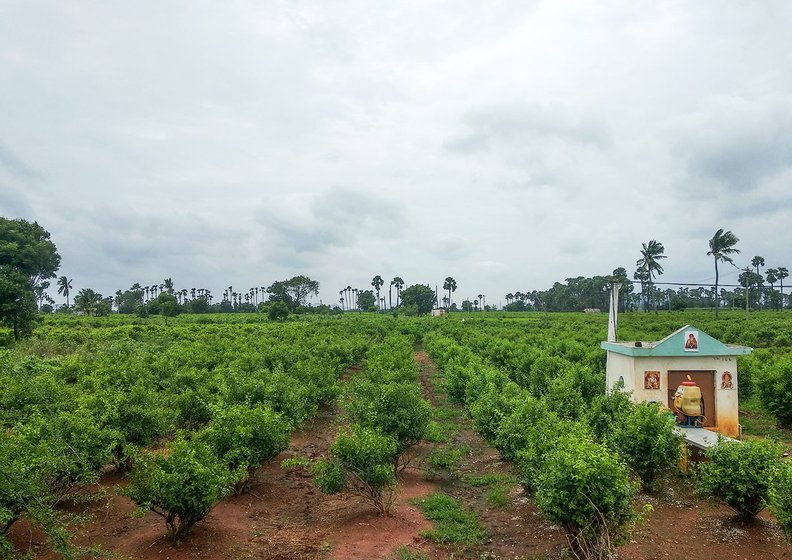 A model of Amaravati at Uddandarayunipalem, one of the 29 villages where land is being pooled for the new capital city. Right: Jasmine gardens in Penumaka village on land that's still not been given up

According to the master plan for the Amaravati Sustainable Capital City Development Project, prepared by a consortium of construction companies from Singapore, the three phases of construction together will require around 100,000 acres of land. On this will be set up the Raj Bhavan, the legislature, the high court, the secretariat, infrastructure (including roads and housing colonies), industries and IT companies – and some of the land will be allotted to landowners whose plots are being acquired by the state.

However, the August 2014 report of the Sivaramakrishnan Committee has said that 200-250 acres would be sufficient for the administrative buildings of the new capital; other than these, it recommended ‘decentralised’ development in different parts of Andhra Pradesh instead of a mega-capital building exercise. The Committee was appointed in March 2014 by the central government to study alternatives for a new capital site while ensuring the “least possible dislocation to existing agriculture systems,” minimum resettlement of people and their habitations, and the preservation of the local ecology. The state government seems to have ignored the Committee’s  report.

The APCRDA master plan also says that 56.5 lakh jobs will be created in the new city by 2050, but it doesn’t say how. The cost of the capital project is estimated to be over Rs. 50,000 crores – an amount confirmed by Sreedhar Cherukuri, commissioner of APCRDA, when I asked him. The funders include the Andhra Pradesh government, the people (through bonds sold by the government) and, potentially, the World Bank and the Asian Infrastructure Investment Bank.

To acquire land for the new capital, the state government came up with the Land Pooling Scheme (LPS) in January 2015. However, the LPS disregards the safeguards and checks promised by the Right to Fair Compensation and Transparency in Land Acquisition, Rehabilitation and Resettlement Act (LARR) of 2013, including an assessment of the  social and environmental impact, the consent of at least 70 per cent of those affected, and fair resettlement packages. 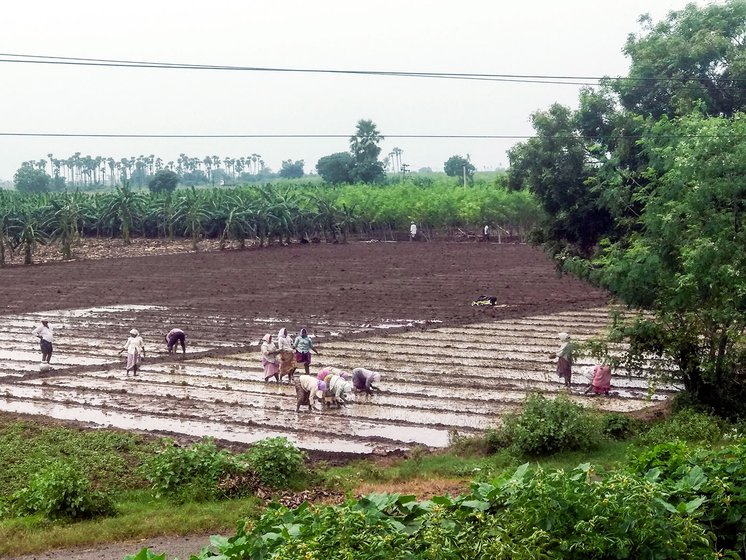 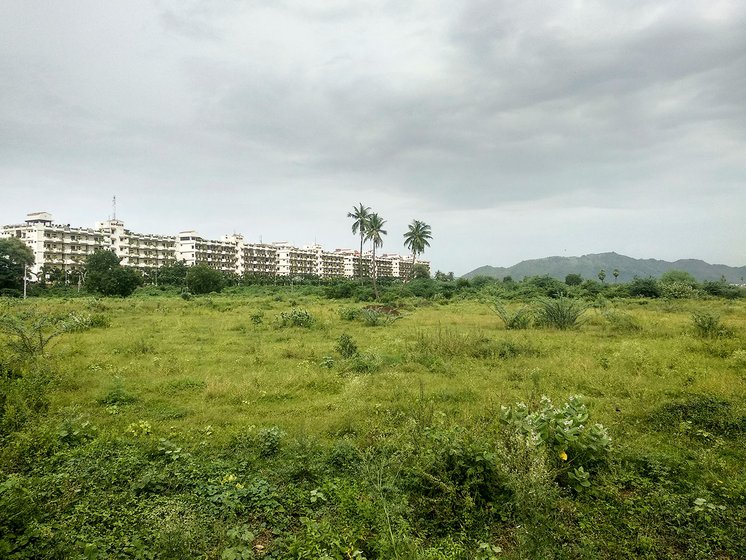 Left: A photo from November 2014 of the fertile fields of Uddandarayunipalem. Right: Buildings have now come up on plots given up for the Land Pooling Scheme, while farming in these fields has stopped

The LPS only takes the consent of landowners and excludes others dependent on the land, such as agricultural labourers. Landowners can ‘voluntarily’ give their plots to the state and get a ‘reconstituted developed’ plot (with residential as well as commercial components) in the new capital.  The APCRDA will keep the rest of the land for roads, government buildings, industries, and so on. The government has also promised compensation of Rs. 30,000-50,000 per acre (depending on the type of land) every year for 10 years, till the landowners are given their new plots.

“The revenue authorities kept on telling us that the government will forcibly acquire our lands if we don’t give it for pooling. It spread lies that the compensation we will get under the Land Acquisition Act is peanuts compared what we would get from the LPS,” says Sambi Reddy.

In March 2017, over a 1,000 farmers wrote to the World Bank asking it to withdraw funding from the capital project because it was a threat to their farm and fishing livelihoods, would destroy the area’s fertile farmland and food security, and the massive construction activity in a  flood-prone region could cause huge ecological damage. They asked the World Bank to keep their names anonymous.

Another farmer from Penumaka, who didn’t want to be named, tells me, “The police foisted false cases on us because we resisted the pooling scheme. Hundreds of police officers would descend on the village and a camp was set up [by the government] for months together in each of the 29 villages.” It served to intimidate the villagers.

Another Penumaka farmer, who too wishes to remain unnamed, adds, “The panchayat office in the village was turned into an APCRDA office which was monitored by an official of the deputy collector’s cadre.” 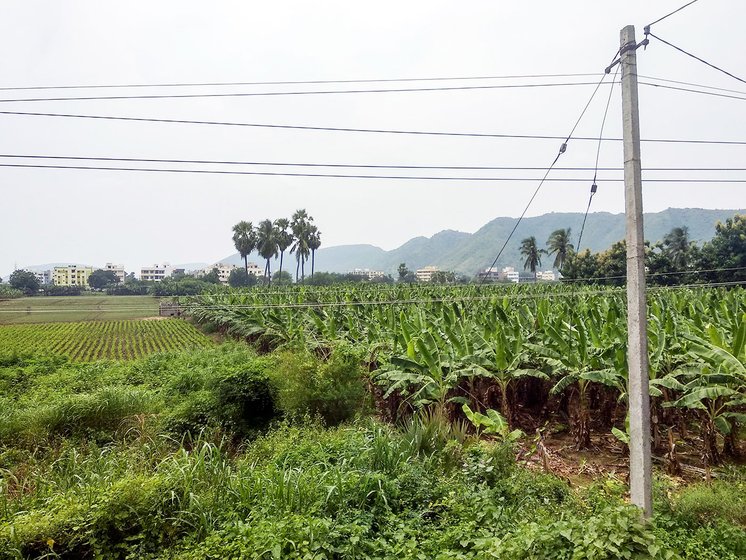 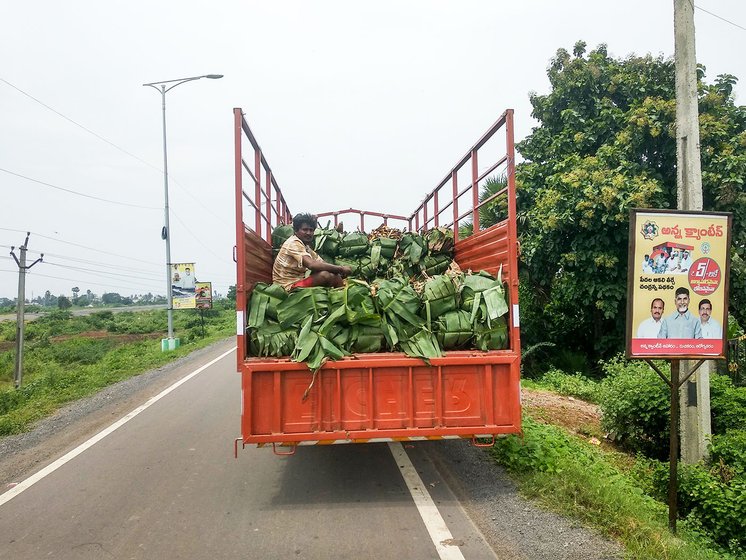 Left: Plantations in Undavalli village on land that's not yet been surrendered to land pooling. Land in many of the villages in this delta region is multi-cropped and fertile, with robust market linkages

According to an APCRDA report for the World Bank, 4,060 landowners (till October 2017) are yet to give consent for the Land Pooling Scheme. However, APCRDA Commissioner Sreedhar Cherukuri maintains that no force or pressure was used, and from January 2015 the farmers started giving their lands “voluntarily and happily.”

Of the 29 villages, the people of Penumaka and Undavalli strongly resisted the land pooling scheme and didn’t give up their lands. The proximity of these villages to the Chennai-Kolkata highway makes this land especially valuable. And many of the farmers here, most of them from the Reddy community, are supporters of the main opposition party, the Yuvajana Sramika Rythu Congress Party.

Landowners in the other 27 other villages are mainly from the Kamma community, who form a strong support base of the ruling Telugu Desam Party (TDP), and support the Amaravati project.  “We should develop. How long will we stay in villages? We want to develop like the people in Vijayawada and Guntur,” says Ginjupalli Sankara Rao of Uddandarayunipalem, who gave away his land for land pooling. In Neerukonda village, far from the river,   Muvva Chalapathi Rao asks, “Why should I do agriculture when I only have losses?”

But even in these 27 villages, there is resistance – besides the exclusion of those who don’t own land from the LPS. In Venkatapalem village, I meet Boyapati Sudharani, a small farmer from the Kamma community, who has less than an acre of land. In February 2015, she was seen in a video on the internet saying, “I have never voted for any party except the TDP ever since I got the right to vote. It seems like we dug our own grave. I have only one question for Chandrababu. If he gives us the plots after 10 years, should we die now and be born later?” Subsequently, a posse of policemen and revenue officials arrived at her home, forced her to retract (by pressuring her husband and in-laws), and give her consent for the Land Pooling Scheme. 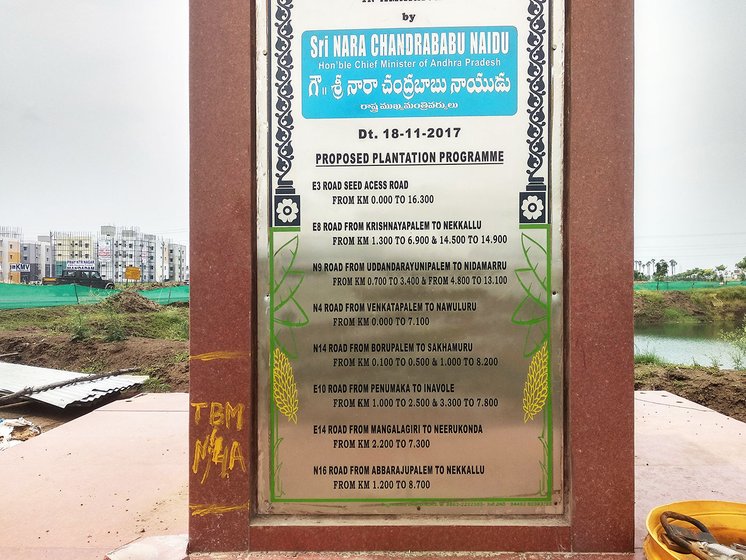 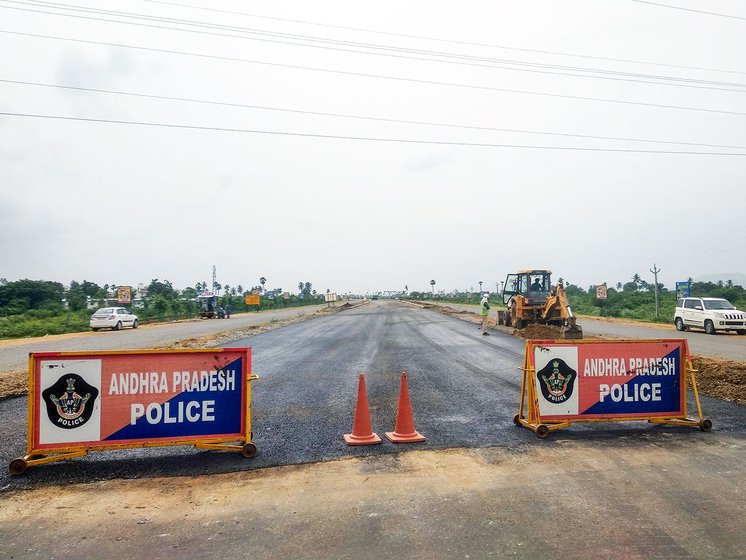 Left: The foundation stone for a 'plantation programme' after the takeover of thousands of acres of multi-cropped land Right: Construction of the road that will connect Amaravati to Vijayawada

“You have groundwater just 10-15 feet below [the surface]. This is multi-cropped land [in the fertile Krishna-Godavari delta] and the farms are not left empty for even a day in the year. One crop or the other grows on all 365 days of the year,” says Krishna Reddy, who owns an acre of land in Penumaka, and rents four more. “I generally get a profit of Rs. 2 lakhs per acre per year. At most, when the market prices are low, I end up with no loss, no profit.”

For long, agricultural labourers have come to Penumaka, Undavalli and some of the other 29 villages from far-away places like Srikakulam and Rajahmundry in search of work. Men earn Rs. 500-600 per day, women make Rs. 300-400, and there’s work round the year. “Now, the people of these 29 villages cannot find work here and are going to far-off villages to look for work,” says Krishna.

I ask him, “What crops do you grow?” Pat comes his reply: “You give me the name of a crop. I will grow it next year and I am sure of a bumper harvest. I can take you around and show you 120 different crops.” Krishna is currently growing banana and maize, and the robust farm-market linkages in the region are an added bonus for farmers like him.

Siva doesn’t know what kind of jobs the state will create once these productive agricultural lands are acquired for the capital city. “Where will those 50 lakh jobs come from? This is all trash, when livelihood opportunities are dwindling. What is happening here is real estate business in the guise of development. This is not a people’s capital. This is a capital for the rich, for the multinational corporates, for the people in suits, not for common people like us.”