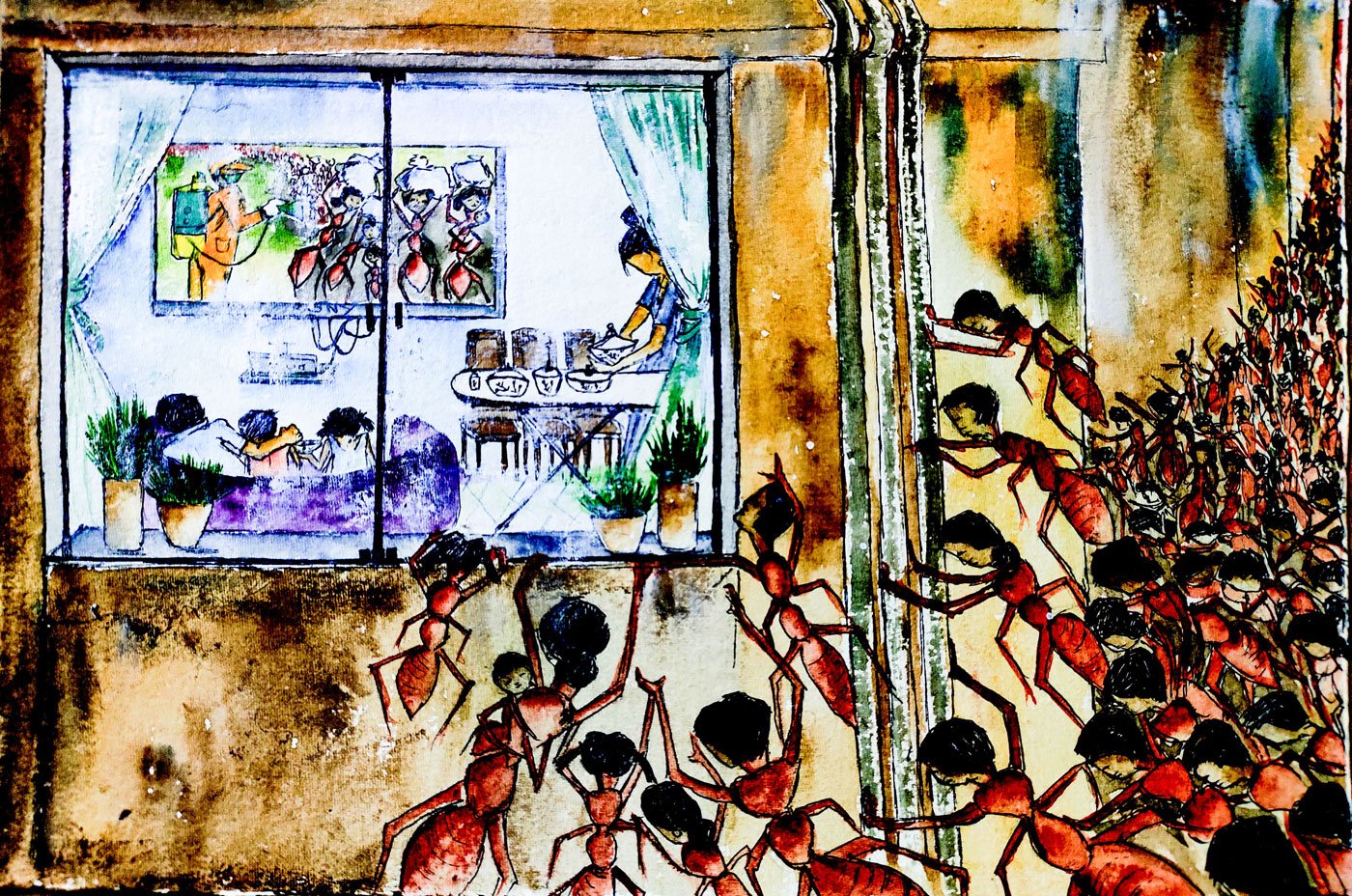 The migrant march of red ants under lockdown

How long can one watch hungry migrant labourers stranded half-way from their villages when there is Chinese-Thai dinner waiting to be prepared at home? A poem that tears into indifference and inequality

She finished her dinner but decided not to go to the television set, like she did every day. The children had demanded vegetables in Schezwan sauce with rice tonight. The vegetable vendor did not have any red or yellow capsicums this morning. “ Mandi bandh kar diya, madam. Lockdown to hai hi, upar se curfew. Sabzi kahanse layen? Ye sub bhi abhi khet se le ke aate hai [The market is closed, madam. Where to get vegetables in this lockdown, and now curfew? All these I get from the farms],” he lamented when she complained about the same old sabzi he had brought on his cart.

He had gone on for a while after that about life’s trials, but she had stopped listening. Her mind was on the creativity that would be needed to cook the evening meal as per demand. At the end of the day she was happy with her idea of coke with the Chinese-Thai gravy that kept the kids quiet. But she was not happy watching television these days.

She detested the news channels the most. The same images play again and again on the screen. Poor people without water in slums, safai karamcharis without protective gear, and worse – millions of hungry migrant labourers stranded half-way from home, or stuck in cities, dying without medical care and food, some committing suicide, and many protesting, demanding, rioting on the streets.

How long can one watch a spectacle of termites gone berserk? She goes back to WhatsApp, where friends in a group are showing off newfound culinary skills. She puts a picture of her own, from the dinner table. In another group, people are sharing videos of dolphins frolicking in the sea near Breach Candy club in Mumbai, flamingos in Navi Mumbai, the Malabar civet roaming on the roads in Kozhikode, Sambar deer in Chandigarh. Suddenly she sees a row of red ants crawling up her mobile phone…

The paintings with this poem is an artist's view of the march of the 'ants'. The artist, Labani Jangi, is a self-taught painter doing her PhD on labour migrations at the Centre for Studies in Social Sciences, Kolkata

Tiny red ants
came out from a little colony
near the bottom right corner
of the doorframe of the kitchen
walking in one straight line
going upwards first
then left
and then down
and then a straight line again
across the kitchen platform
marching in single file
one after the other
like a disciplined lot of labourers.

They came every time
when Ma dropped some sugar
or if there was a dead cockroach
on the kitchen floor.
She found the sight of these ants
pulling each grain
or an entire carcass away
walking back
in the same disciplined fashion
nauseous.
She would scream her head off
until mother came running
to her rescue.

Today as if to settle scores
they invaded her house
She wonders how
in the middle of the night,
like a nightmare, they were there
innumerable red ants
inside her house.
no lines
no order
no discipline
They came out
entire colonies
like they used to
when mother put
some Gammaxene powder
on the nest mounds--
frantic, agitated,
struggling to breathe
they invade her home.

She quickly sweeps them out
of the living room
out into the garden
and shuts the door tight.
But just then
they surface
Millions at a time
from behind the windowsill
from the space underneath the door
that can hardly be seen
from the cracks in the doorframe
from the little keyhole of the main door
from the holes of the bathroom drains
from the gaps in the white cement
Between the tiles of the floor
from behind the switchboard
from the moist crevices in the walls
from the hollowness of the cables
from the darkness of the cupboards
from the emptiness under the bed
traumatised colonies of ants overflow
looking for their homes
Broken, destroyed, devastated
searching for their lives
crushed between someone’s fingers
suffocating beneath someone’s feet
hungry colonies
thirsty colonies
angry colonies
colonies of red bites
gasping for breath
colonies of red ants.

– Translated by the author from her original poem in Gujarati.