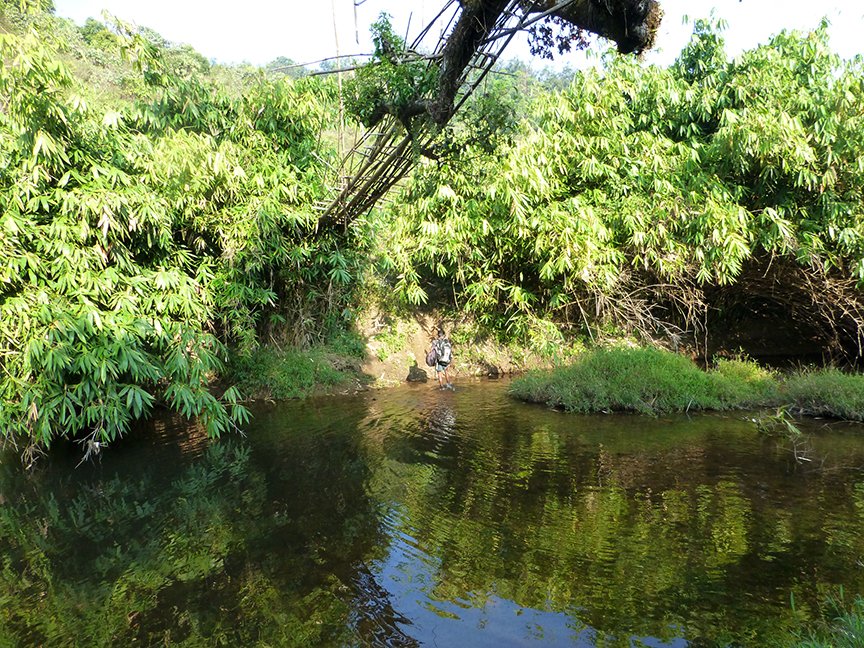 The elephant we couldn’t see

How does anything as big as a bull elephant remain invisible?

We had spent nearly an hour in the field with its tall grasses and many trees. In the company of a wild bull elephant we could not see. That is, our band of eight wanderers visiting Kerala’s remotest panchayat , Edamalakudi, could see nothing. Everybody else seemed to follow his movements clearly. We could hear the shouts of aanai (elephant) from villagers not visible to us. Raised voices whose owners were in nearby hamlets advised one and all not to go near the water. Adivasis crossing us on their way to Societykudi — from where we had just come – told us: "He’s down by the river. Watch out."

This was not comforting, since we were trying to cross the river Manalar at that very moment. It had this 'living bridge' made of bamboos, tree branches, creepers, ropes and stray pieces of wood. But it was in disrepair and usable only  in the monsoon. We retreated to the nearby field. The voices continued. Our ‘forest watcher’ Achuthan M., himself a Muthavan Adivasi, seemed clear about the pachyderm’s whereabouts. And maybe those in the distance were using the tree-top machans that we’d passed the previous day. Perhaps that was how they kept track of him. A lone bull elephant is bad news. The chances are he was in masth and had been expelled by an annoyed herd.

This is the moment you remember all the worst elephant stories. Or recall that a bull in masth can have testosterone levels 60 times higher than he normally would – and is likely spoiling for a fight. With no one of us inclined to oblige him (our testosterone levels weren’t up to it), we retreated under the shade of a tree. Each time something moved between the trees, we wondered: is that a ‘forest watcher?’ Or the bull? For that hour, the beauty of Idukki’s forested wilderness was lost on us. 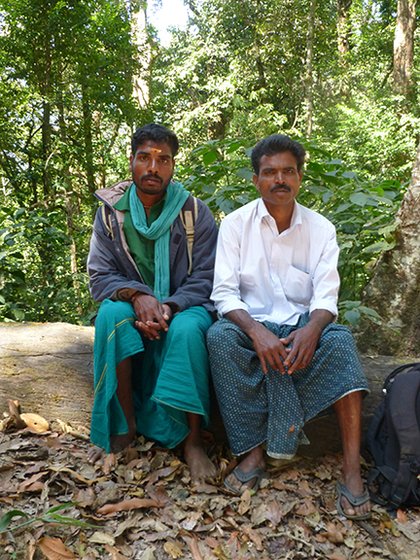 We had set out from Kochi, and stayed the night in Munnar. We had driven up to Pettimudi early in the morning and from there taken the tiring 18 kilometres up and down hilly trail to Edamalakudi. Finishing our interviews in the panchayat , we thought we would be clever the next morning. Why struggle with those gruelling 18 kilometres again? We could take the ‘short-cut’ and go up the other direction. Towards Valparai in Tamil Nadu’s Coimbatore district. That would be steeply uphill, but a mere 8-10 kilometres. And Valparai was not too much further by road to Kochi than Munnar was.

But this was elephant territory and we were stuck.

Finally, three young Adivasi men from a nearby kudi (hamlet) marched past us in single file, one clutching a small bag in his hand. A few minutes later a short, sharp bang told us the bag had firecrackers in it. We heard no elephant sounds. How does anything as big as a bull elephant remain invisible? But a few moments later, the men marched back past us. The bull clearly had a distaste for fireworks. “He’s moved for a bit. Now cross the river, quickly,” they said. We did. We still saw no elephant. Not even on the other side. We did see piles of elephant dung nearby. But were not keen to linger on and investigate if it was fresh.

We learned that the rest of the herd had taken over the route we had imagined would lead us to Valparai. Even the Adivasis, including our intrepid forest watchers, would not chance that trail. Our only option now was to take a much longer route, many stretches of it along steep, uphill inclines. We seemed to be forever crawling up risky slopes.

Tip: however bad your old shoes, never use new ones for a long, uphill trek as I did.

What should have been an eight-kilometre walk turned out to be more like 25. With heavy bags and backpacks, mainly cameras and water, that took over eight hours. We did get to relax a half-hour at the river Edamalayar — with no elephants in sight. And we were lucky this was the dry season. Come the rains, blood-sucking leeches rule this route. All this meant that by the time we reached Valparai we had covered over 40 kilometres since we had set out from Pettimudi 36 hours earlier. It felt like a 100. And we still hadn’t seen an elephant.

This article was originally published on psainath.org