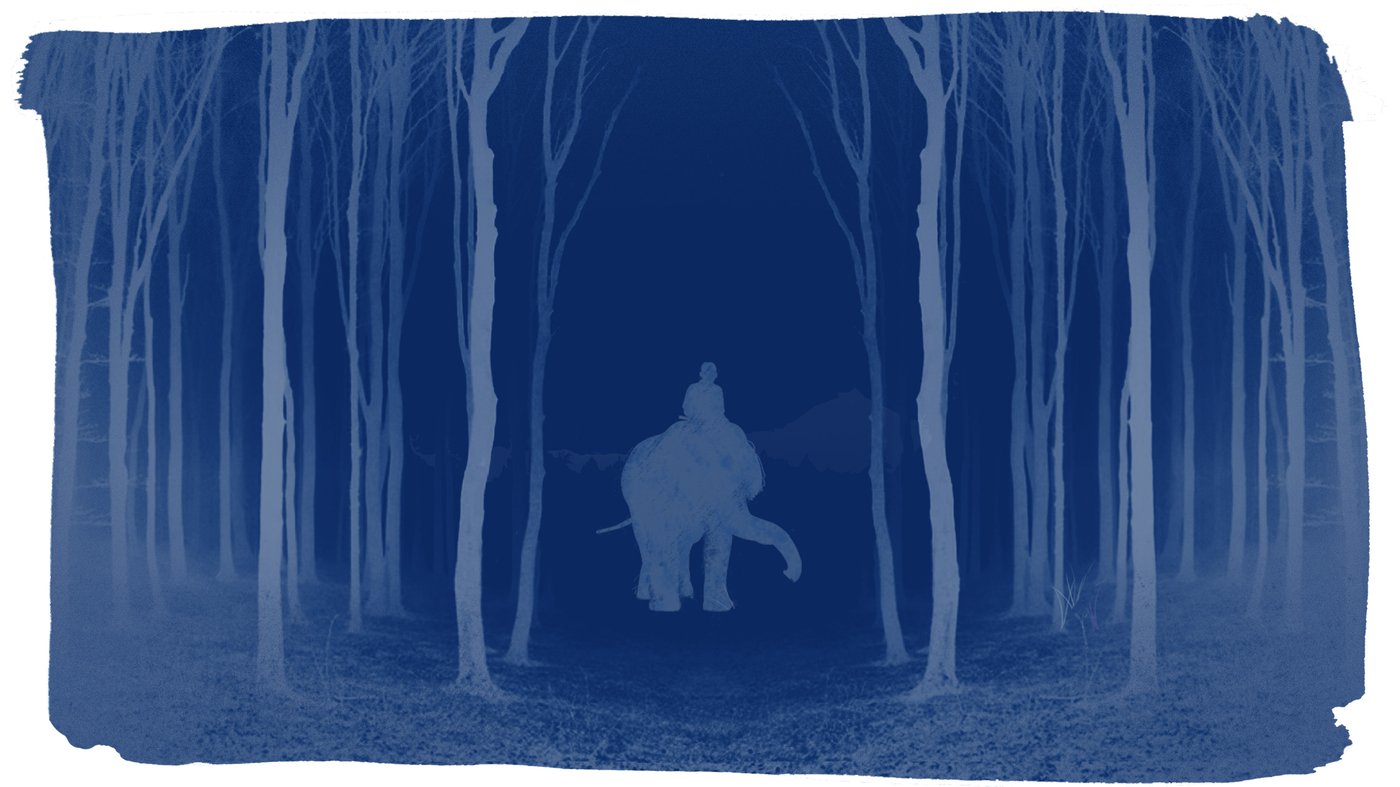 Elephant Man and the belly of the beast

How does one feed a creature requiring 200 kilos of grass and other food each day? A failed attempt by journalists to find out in Surguja, Chhattisgarh

There was no mistake about it. It was an elephant out there. With a man sitting on top of it. We were walking along a deserted stretch on the Surguja-Palamu border when we first saw man and beast. At least we thought we had. The three of us checked this out with each other. We were not, however, in a hurry to go and check it out up close.

It annoyed Dalip Kumar, who had come down from Chandwa to meet me. Our attitude, he pointed out, was absurd. “If we saw the same sight in Patna or Ranchi or any other urban town, we would not think it odd at all. This is jungle. Elephants belong here. And we are being stupid.”

Maybe that’s why we were being stupid. This was jungle. Dalip was being perfectly logical, of course. But he confessed to a marked lack of enthusiasm himself when it came to following up logic with action. Besides, for a while, we were not sure we had really seen a man on top.

By this time, though, the man had seen us. He waved out cheerfully and steered his huge vehicle in our direction. Her name was Parbati and she was as gentle a soul as you can meet anywhere. His own name, fittingly, was Parbhu.* He was taking her to a temple in some place we had never heard of.  They made the rounds of all the temples in the area, he explained. There they could earn some money. More, if there was a festival on. Also, the good people of the villages en route gave them a bit of food and cash.

Parbhu said he lived in Surguja in Madhya Pradesh. But he and Parbati moved about on both sides of the border with Palamu. The single district of Surguja is larger than Delhi, Goa and Nagaland combined. Palamu belongs to Bihar.** Both are among the poorest districts in the country. That is, they have very large numbers of poor people. In terms of resources, both are fabulously rich. 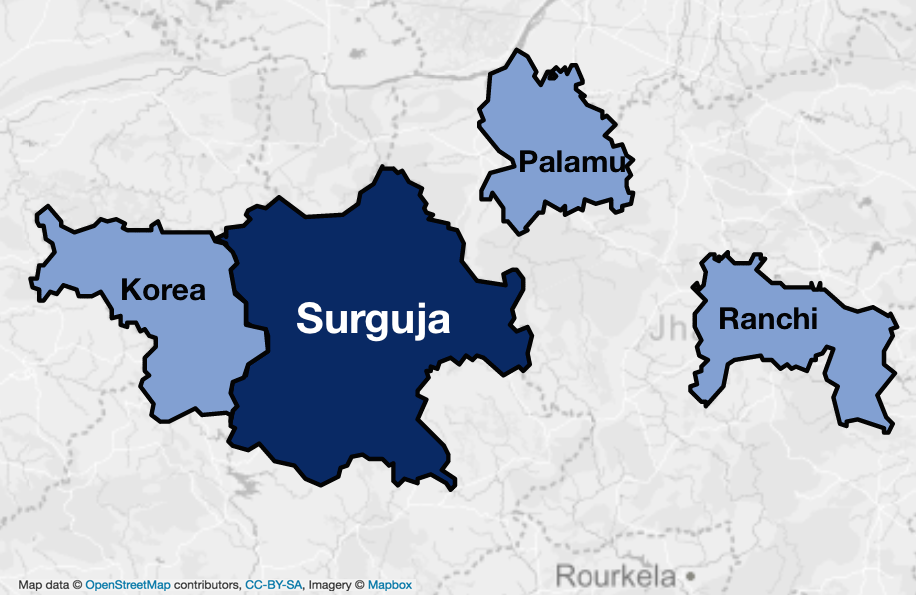 Parbati is probably of distinguished lineage. The elephants of Surguja were famous in history for their crucial role in battle. As the district gazetteer puts it: “In medieval warfare, elephants were the most important source of strength. Hence, the Surguja State of Chattisgarh was one of the important centres from where elephants were procured during that period. The relationship of the Sultans of Malwa with the rulers of Surguja was calculated on this basis: that they assured Malwa of a constant supply of elephants.”

Malwa, in fact, considered this the most important reason for retaining its suzerainty over Surguja.  It was hard, though, looking at them, to visualise the ancestors of Parbhu and Parbati as fierce and warlike. Parbhu seems the soul of docility. And Parbati looks about as warlike as a rabbit. (If you can imagine a very, very large, peaceful rabbit.)

Nomadic notions of nearby

Dalip, I, and the driver of the ancient jeep we had hired in Ambikapur*** had been searching for a village we never finally found. We had parked the jeep near a small Birhor colony. The Birhors are a very ancient tribe of the same Austro-Asiatic language group as the Ho, Santal or Mundas. A nomadic people of the Chottanagpur belt, they move mainly around Palamu, Ranchi, Lohardaga, Hazaribagh and Singhbhum. They are a vanishing tribe, with just around 2,000 of them remaining today, perhaps less.

This clan of Birhors had told us of an interesting village that they said was ‘nearby’. We were now in the process of learning, many miles down the road, that it is fatal to accept a nomadic person’s  concept of  ‘nearby’.  We had left the jeep, which had been giving us trouble, in the care of the Birhors and gone ahead on foot.

Parbhu generously offered us a ride. We accepted. I had been counting the number of different forms of transport I had used since I set out on my project months ago, in mid-1993. They ranged from country boat and raft to the tops of trains. An elephant was not on the list. Some distance down the trail, we sat down to talk to Parbhu.  The search for the village was forgotten. Here was something truly interesting. And ‘nearby’. We wanted to know how he fed and maintained Parbati.

Using our expert interviewing skills, we spent the next hour-and-a-half learning precisely nothing. Parbhu was sweet but cagey. He said they lived okay, off the alms they got from people and at temple fairs. In some parts of the country that would be true. Here it could not be.  “You *%*#* liar,” said Dalip. “That thing needs 200 kilos of grass. Plus other food. I’ll tell you what you do. You let her forage in the cultivated fields nearby, don’t you?”

This was probably true. Parbhu denied it flatly. “We may as well interview the bloody elephant,” said Dalip. “She’d be more truthful. He can’t get too deep into the forests to feed her. There are real wild elephants up there. And other creatures. No, he loots the fields. He just takes her out there and lets her devastate the crop.” As we discussed her diet and bills, Parbati kept playing with Parbhu, her trunk running over his head. That she loved him was clear. If he looted the fields, he did a good job of it.

There were times, said Parbhu, when bade log hired their services. For instance, a Parbati dressed up in finery made a grand spectacle at a wedding. The last one they graced, though, was not quite so profitable. “The malik cut Rs. 50 from the total,” said Parbhu. “Parbati had been hungry that day. And she helped herself to some of the food there when she shouldn’t have.”  He slapped her lightly on the trunk. Maybe remembering the loss of the 50 rupees. She wheezed affectionately. Maybe remembering the meal at the wedding.

“Once a man came and said he wanted to hire Parbati for a procession. His leader was contesting an election. But it didn’t happen. He said later that some people had told him bad things about Parbati. That she was not reliable. People do these things,” he said sadly.

Didn’t he have problems when he entered villages where the sight of Parbati created much excitement? Once, said Parbhu, “a whole lot of dogs started barking at Parbati and snapping at her. She got scared and tried to retreat. She backed into a house and there was some damage. The owner of the house was very angry.”

We speculated in silence for some moments. What was it like to be owner of a house that Parbati backed into? What must the house look like after the event?  Was the owner very angry or just terrified to death?

Another time, said Parbhu, “people threw stones at Parbati outside a village….”

“Ah!” said Dalip triumphantly. “That must have been when you were looting the fields.”

“No, no. We were just passing through their fields. I think some of the men were drunk. They threw stones. We retreated in another direction. Unfortunately, it was getting dark. And there was another basti there that we entered. And Parbati was moving quickly. So people there got frightened. She was not being aggressive at all. They just panicked needlessly and started screaming.”

We wondered what we would do if a huge elephant charged into our midst out of the darkness. Maybe we wouldn’t throw stones at it. But panic and screaming seemed pretty much on the agenda.

How to feed an elephant

The more we looked at it, the more complex the problem of Parbhu and Parbati seemed. The overwhelming majority of Surguja’s human beings do not eat properly. How then, to feed an elephant? Or was Parbati feeding Parbhu by way of the earnings she brought in? Apart from elephants, Surguja has historically been famous (or infamous) for its poverty.

The Sultanate, the Mughals, the Marathas and the British – all levied their lowest taxes or tributes on this state. The Sultans and Mughals mostly settled for elephants. As late as 1919, the British, who were extracting fortunes from neighbouring states, were settling for a pittance here. Each year, they took just Rs. 2,500, Rs. 500 and Rs. 387 respectively from the local feudatory states of Surguja, Korea, and Chang Bhakhar. 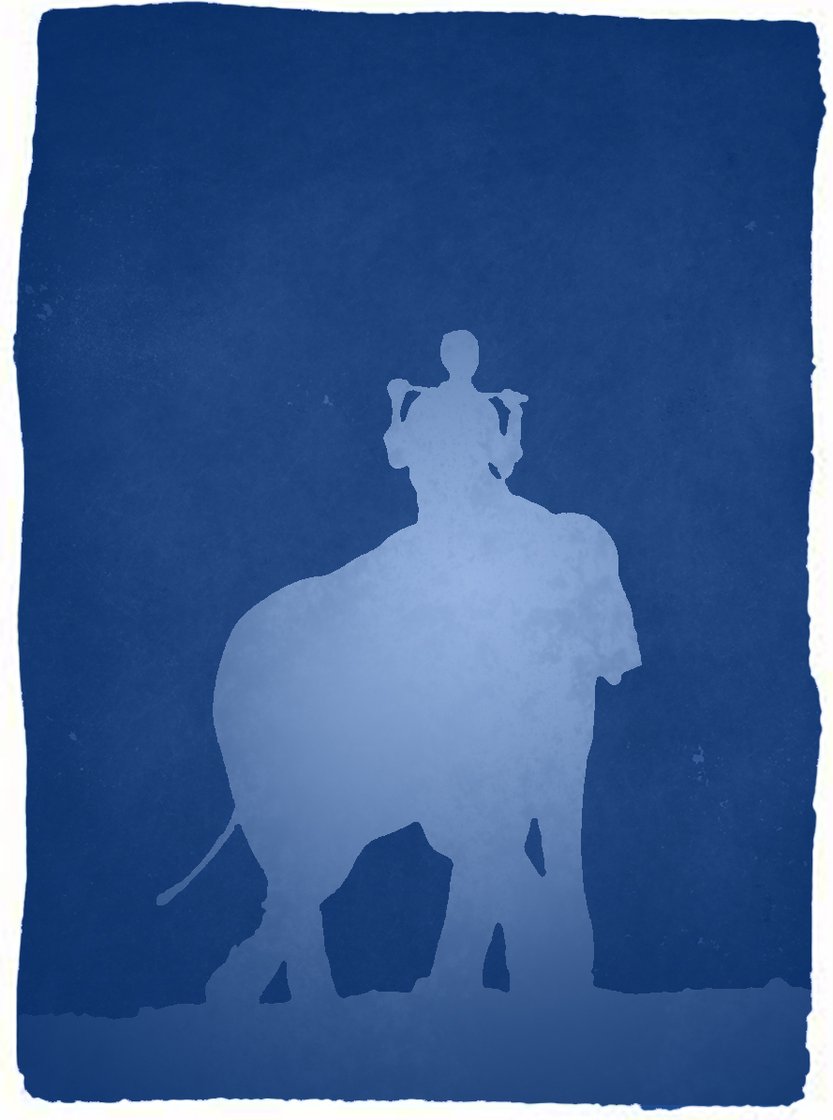 In the last years of the 18th century, the Marathas overran the feudatory state of Korea, then under Surguja’s suzerainty. Even the mighty Marathas could not take full possession of the territory – finding it too difficult a terrain to control. Instead, they demanded a mere Rs. 2,000 from the Raja of Korea. Discovering that he could not  pay,  they lowered this charge to Rs. 200 a year for five years and grabbed several head of cattle in warning. Soon, according to the district gazetteer, even the ruthless Marathas came around to understanding that the Raja could not pay a single rupee. They settled, therefore, for “five small horses, three bullocks and one female buffalo.”

They then released and even returned some of the other cattle they had looted, finding them largely worthless. The hostilities came to an end and the Marathas marched back, baffled.

So how does one feed an elephant in Surguja? One that you can’t take too deep into the forest?  We were no nearer to an answer than we had been earlier.  One last, desperate effort seemed in order. We launched into it.

We argued, cajoled and pleaded with Parbhu, trying to pin him down. With remarkable sweetness and restraint, he answered our questions in great detail, telling us nothing. Parbati observed the proceedings with a gentle, amused contempt.

An hour later, they were on their way. “To the next temple,” I said.  “To loot someone’s field,” said Dalip.

Whatever it was he did, he managed to get her 200 kilos of grass a day plus other food. Only, we didn’t know how.

*Parbhu or Prabhu is another name for Lord Shiva, whose companion is Parvati (or Parbati).

**It later became a part of Jharkhand.

***The district headquarters of Surguja, now in Chhattisgarh.

Priyanka Borar is a new media artist and researcher, interested in the performative nature of the medium. She works with interactive media, but illustrations is her first love, and a more recent one is comics.

A version of this story with very different illustrations first appeared in India Magazine of September 1998, and later in the Penguin book Elsewhere: Unusual takes on India, edited by Kai Friese, in October 2000.