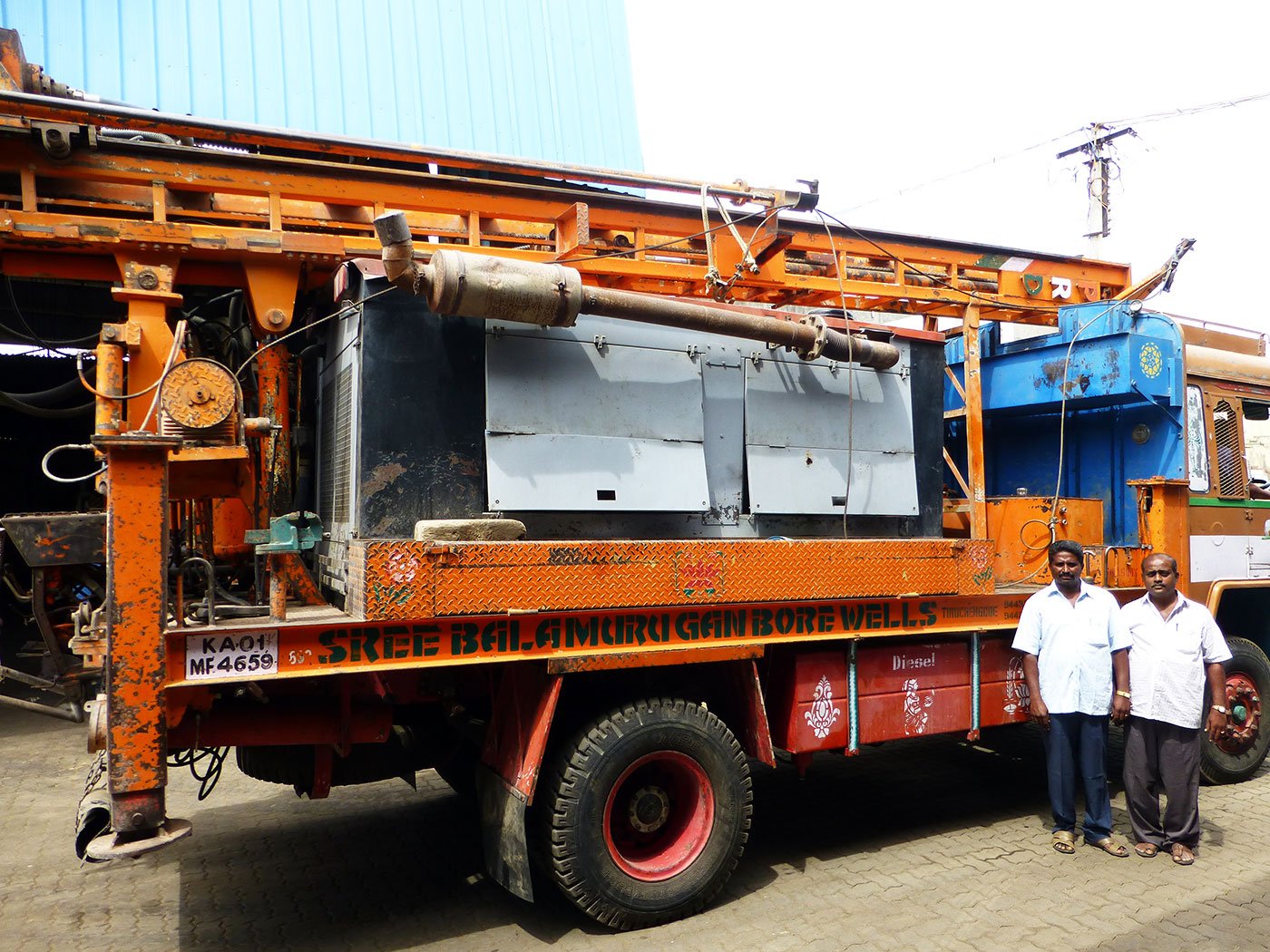 Rig operators from Tamil Nadu are responding to a desperate demand from farmers across India, but with grave consequences for groundwater supplies

No other town can boast as deep a connection with the rest of the country as this little one in Tamil Nadu. Machines from here have struck great depths in most Indian states (and in many African countries as well). Tiruchengode is the nation’s borewell rig capital and thousands of machines and operators from here go down as much as 1,400 feet on any day, most months of the year. The monsoon has paused their activity in states like Maharashtra where they have picked up a great deal of business in recent years. But there are parts of the country where they’re still drilling for water.

The water-crisis in Maharashtra – which only gets highlighted in summer – saw many thousands of borewells drilled in just the Marathwada region in the first three months of this year [2013]. The truck-mounted borewell rig was omnipresent in the fields. And the borewell itself was a major source of debt, if not of water, in the rural districts. Most of the rigs we saw rumbling along the roads turned out to be from Tamil Nadu. (Some were from Andhra Pradesh). “They seem mostly to be from a single town,” a senior geologist of the government of Maharashtra had then told The Hindu . That town, it turned out, was Tiruchengode in Namakkal district of Tamil Nadu.

“I stayed four months this year in a village close to Nanded in Maharashtra,” C. Vaiyapuri of Sree Balamurugan Borewells told me in Tiruchengode. He is a dynamic, hard-working rig operator. In four months, this single operator sank about 500 borewells in Maharashtra, mostly in water-stressed Marathwada. “You can do up to 1,300 feet a day,” he says, “if the soil is ‘loose formation’ and so easier to drill. Which means you can sink even four a day if the wells are under 300 feet. If it’s ‘hard formation’ you won’t go past 1,000 feet in a day.” 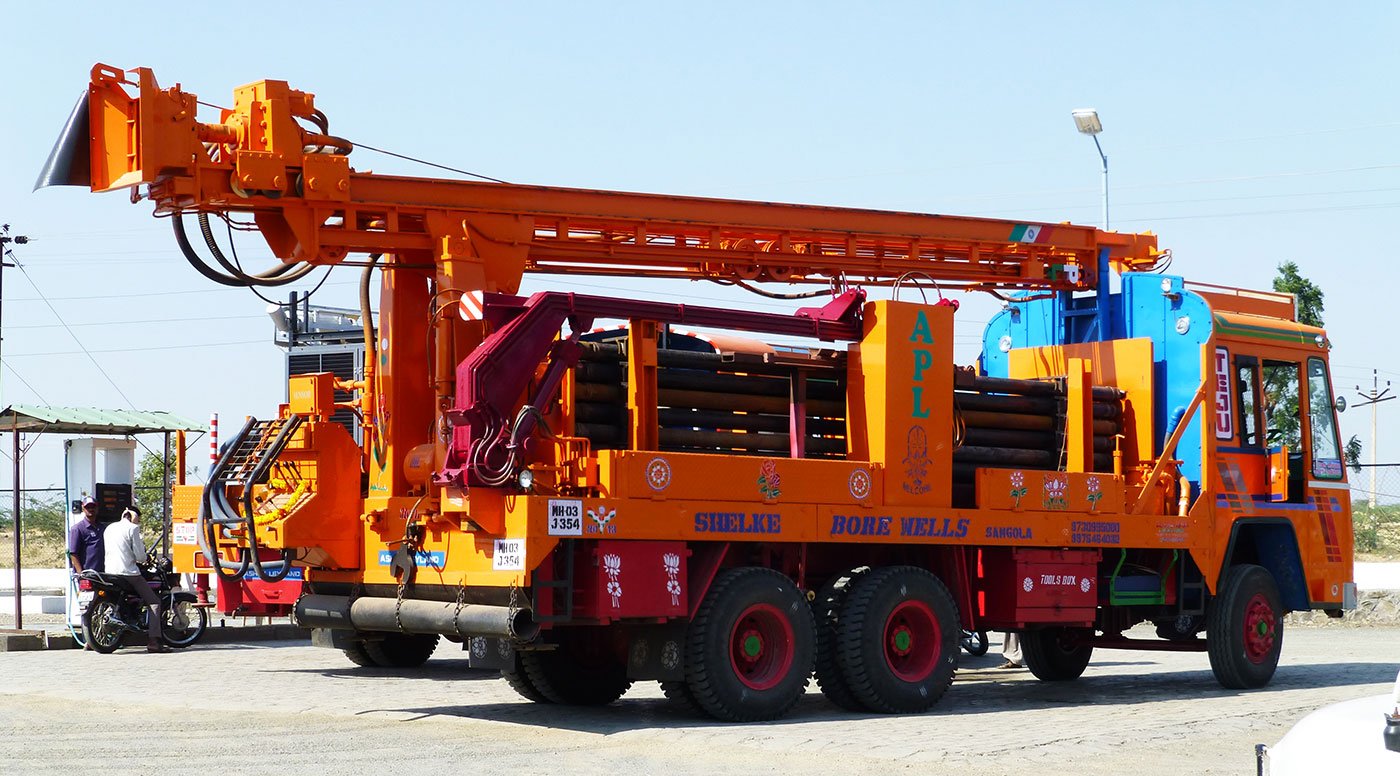 A few thousand rigs roll into parched Indian states each year and drill deeper than 1,000 feet to extract scarce groundwater for irrigation

Each truck-mounted rig is supported by a second large vehicle ferrying both equipment and men. The whole team could be up to 20 people. A manager, two drillers, two assistants, two drivers, a cook and 12 manual labourers. The workers bring another pan-Indian dimension to Tiruchengode’s reach. The rig operators of Tamil Nadu have agents and brokers in every state. The workers are mostly from Bihar, Orissa, Jharkhand and Chhattisgarh. Just a few are from Tamil Nadu. The standard pay is Rs. 200 a day plus three meals for work that could last many months in the year.

How many rigs are there in Tiruchengode town and taluka ? Not more than 5,000, says T.T. Paranthaman, managing director of PRD, a major drilling rigs concern. Nearly 7,000, estimates N.P. Velu, president of the Tiruchengode Lorry Owners Association, and a rig-owner himself. Up to 20,000, insist other operators. All three estimates could be right – at different levels. An industry veteran says: “A lot of the owners and rigs are here. But many rigs are registered in other states, perhaps for tax purposes.”

Meanwhile, rig operators are returning from places as far off as rural Rajasthan. One had even sunk borewells in Jammu. There are two or three months in a year when the rigs take a break for servicing. That’s mostly when the rains have set in.

The average borewell depths vary in different states, says Velu. “In Karnataka, the average is now close to 1,400 feet. Not very much less in Tamil Nadu. It all started with a drought in the 1970s.” Sensing an opportunity in this sector, groups of farmers and workers engaged in sinking wells, pooled resources and bought a few rigs. (Even today, over a third of the rigs here are owned by such groups).

“At that time, the depths at which we hit water was no more than 100-200 feet,” says Velu. “Maximum 300. The greatest increase in depths to which the wells are sunk has come in the last five years.”

The story of this town’s rig operators throws up a serious dilemma. They have brought jobs and prosperity to Tiruchengode and nearby regions. Among them are those once illiterate workers who banded together in the late 1970s to buy their rigs and work their way out of poverty. (This entire belt of Tamil Nadu, including Coimbatore, Karur and Tiruppur, has an impressive history of entrepreneurship from below). The rig operators also respond to a real demand from farmers across the country. A demand driven by despair.

The same process, though, implies grave consequences for groundwater supplies. Rampant exploitation of that resource has seen the water table plummet across the country. The Collector of Osmanabad in Marathwada said this March [2013] that the water table in his district (where the rigs had been active) was five metres below its five-year average. If 10,000 rigs from just one part of Tamil Nadu are sinking a 1,000 feet a day on average across India – that’s 10 million feet. Doing this even for just 200 days a year would make that 2 billion feet. That’s a lot of drilling. Even with high failure rates, that’s a lot of groundwater being sucked out.

The Tiruchengode rig operators did not choose this path of development for the country and can’t be faulted for that. They did not impose the regime of unchecked groundwater exploitation that prevails. And though they are the major force, there are also other operators in the country. Rigs have other uses too, but the great demand is for borewells. And the explosion of those signals disaster. (Groundwater accounts for two-thirds of irrigation water and over four-fifths of drinking water in India). The much-needed social control of this process won’t happen in the present water regime.

Why are there so few many machines at work in your own neighbourhood, I asked one Tiruchengode veteran. “There’s not so much water here now,” he said. “We’re hitting 1,400 feet in nearby Erode town.”

This article was originally published in The Hindu on July 28, 2013.