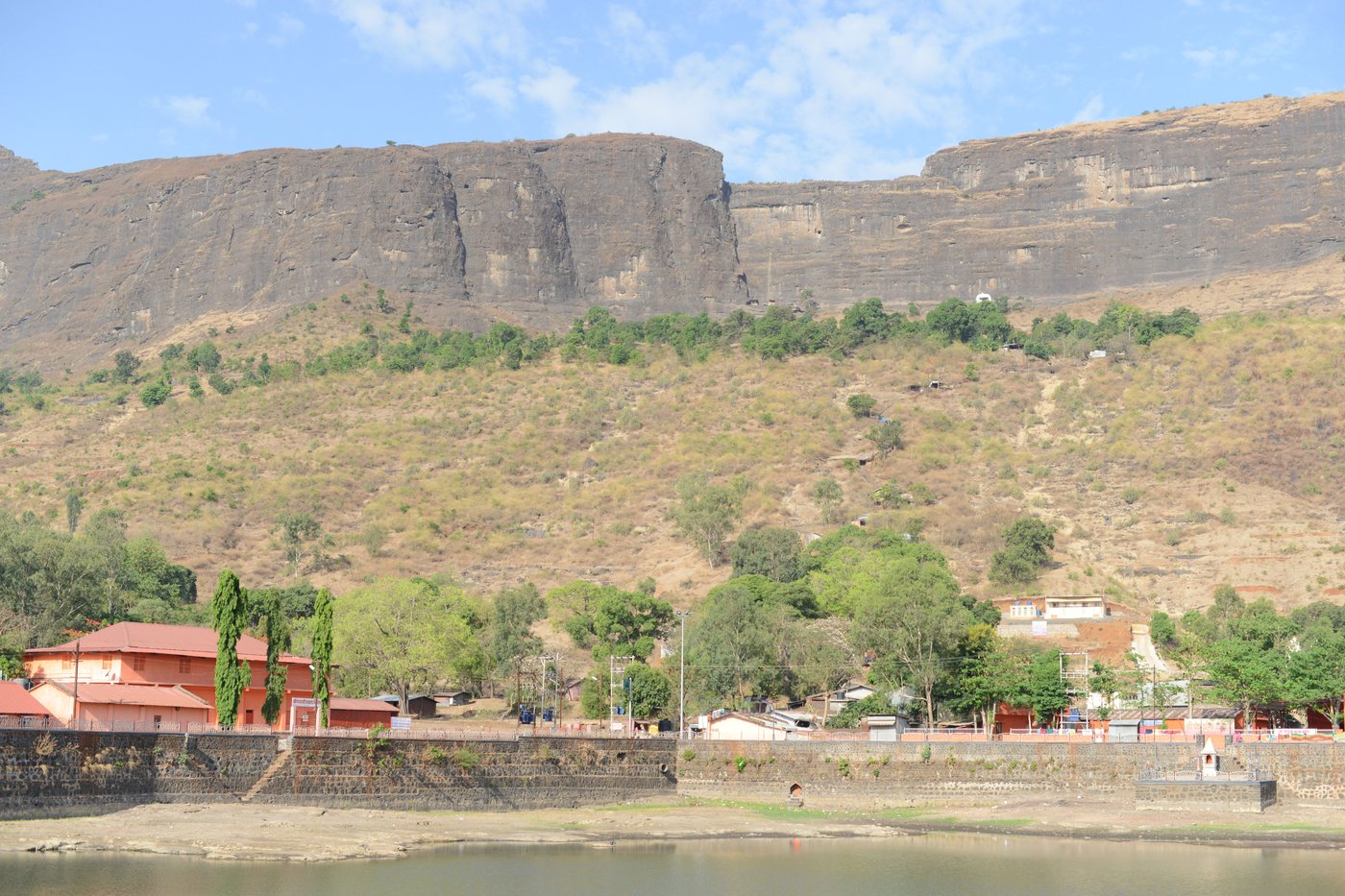 The sacred waters of a tanker

He stood poised at the edge of the Ramkunda, in prayer-like posture at this ancient bathing ghat , perhaps the holiest spot on the river Godavari. Then he went down on his haunches and bathed  – in the sacred waters of a tanker.

Welcome to Maharashtra’s water crisis – in the very source region of the mighty Godavari.

The historic Ramkunda bathing ghat went dry in April for the first time in 139 years. For over two months since then, the kunda has been kept alive by pouring water from 60-90 tankers a day into it. In short, Maharashtra is pouring tanker water into a river. The Godavari itself is in trouble, running dry in stretches where that has never happened before in living memory. By May, it was down to a feeble trickle at its source in the Brahmagiri mountain rising above the town of Trimbak in Nashik. (More often called Trimbakeshwar after the temple sanctifying the river’s source). People here hope the just-breaking monsoon will bring some respite. 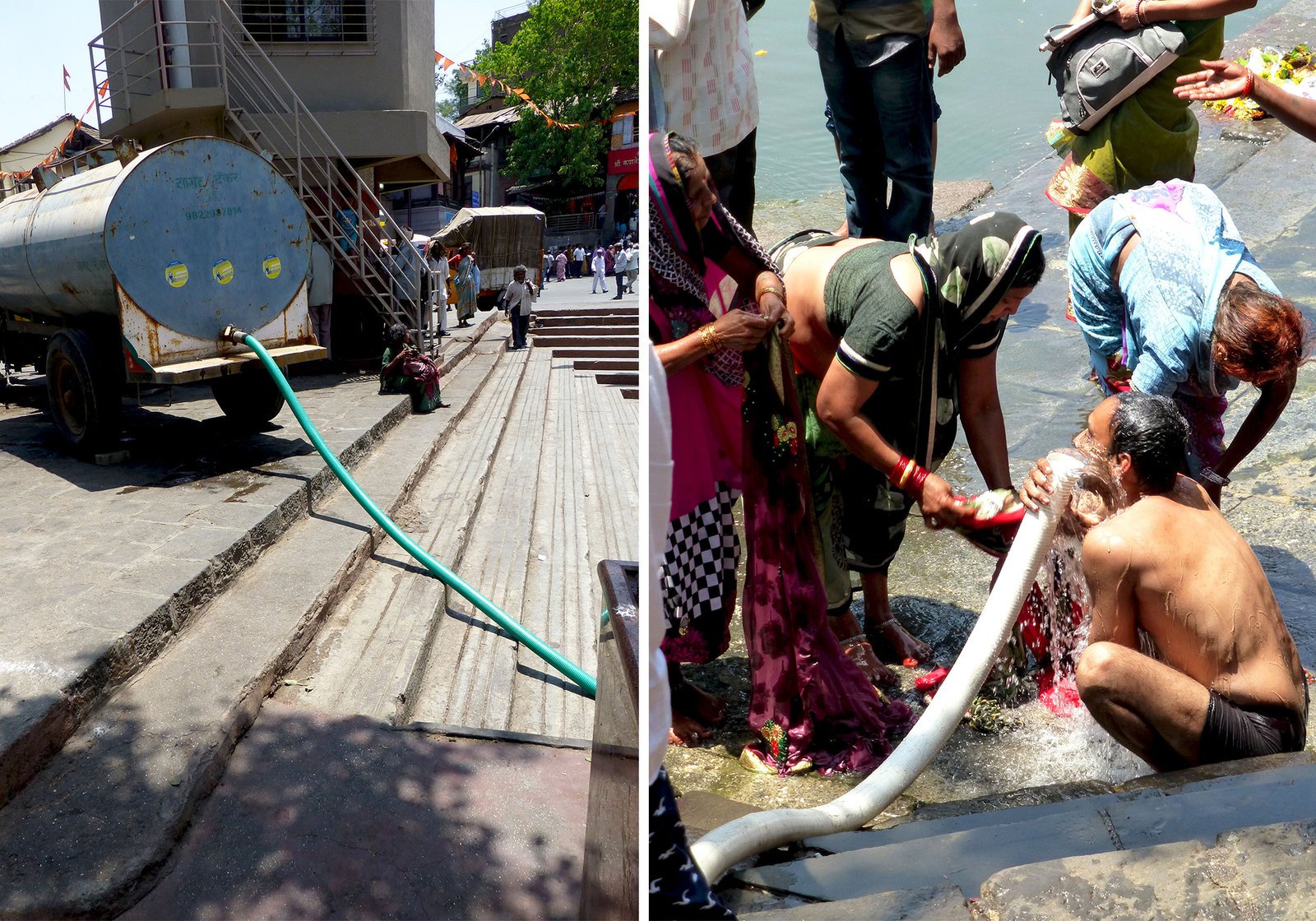 Left: A tankers pouring water into the river. Right: A pilgrim bathes in the water of the tanker, not the river

"The very town that is at the source of the river was down to getting water once in three days in the lean season,” laughs Kamlakar Akolkar – who combines the roles of press photographer and purohit (priest) in Trimbak, an economy driven by religious tourism. “There’s been 20 years of deforestation,” says Akolkar. “Our green cover is gone. There are now innumerable roads, hotels, boarding houses, development, lots of construction. The town itself has around 10,000 people. But there’s a floating population of 50,000, including pilgrims, vendors and others in the tourism economy, adding to our water stress. Where two decades ago we had up to four months of rainfall, we’re now down to one-and-a-half months of rain.”

A few kilometres down, Satish Shukla, chief priest at the Ramkunda told us that “the municipal corporation destroyed us.” Shukla, a Bharatiya Janata Party corporator some years ago, is president of the Godavari Panchkoti Purohit Sangh. That’s a nearly 70-year-old association of priests who identify with the river. “The corporation broke down a stone ghat that existed for ages and made one in concrete. I wish they had not done that. Damage not done in hundreds of years occurred in the last two,” said Shukla. “The rampant concreting of everything is killing the river. Old aquifers are dead, old fountain springs are no more. They never once consulted us purohits . They just changed whatever they liked.  The natural flow of the river is gone. Lord Varuna always answered the prayers for rain by our purohits . Alas, not any more.” 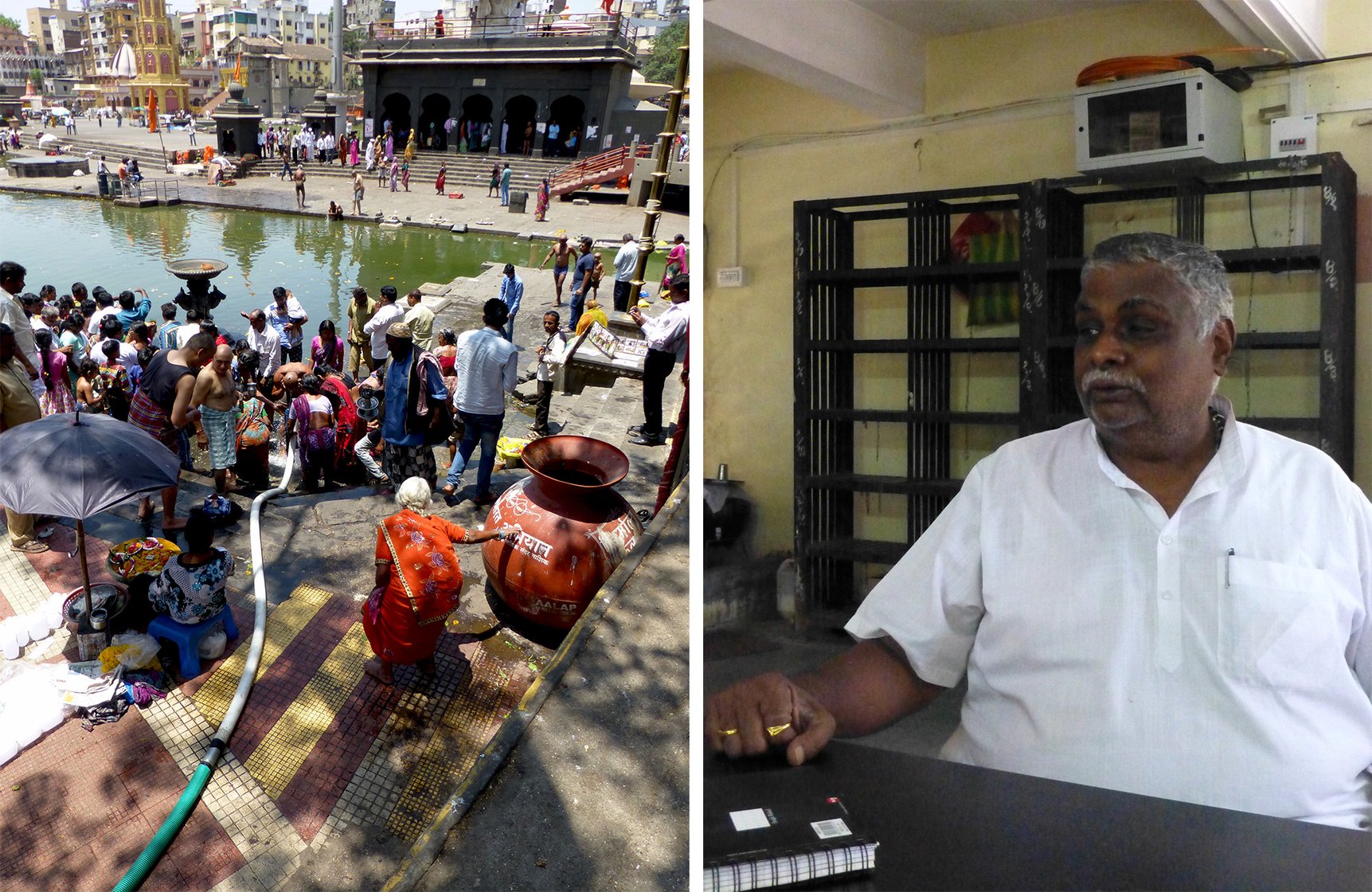 Left: A crowd of pilgrims gathering at the edge of the Ramkunda. Right: Satish Shukla, president of the Godavari priests' association

Lord Varuna may have turned a deaf ear to his purohits , but the government decided to play rain god to the Kumbh Mela held in Nashik. Irrigation department officials say a total of 1.3  thousand million cubic feet (TMC) of water was released for the Kumbh Mela from Gangapur, the main dam on the Godavari, and its two minor siblings Guatami and Kashyapi.  The water released for the three days of the ‘shani snan’ (royal bath) in August-September 2015 was only one part of this. The closing event in January this year took a lot of water as well. The dirt created in the river by the holy bath required the release of still more water to clean up the mess.

In all, 1.3 TMC was released over months to the Mela and its many allied events. That equals almost half of Nashik city’s allocation of 3.7 TMC for the entire year of 2015-16. Complaints on the matter have landed in the courts. While all this may have answered the prayers of the devout at the Mela, those of the farmers downstream went unheard. They are dependent on the timely release of water from Gangapur for their needs. 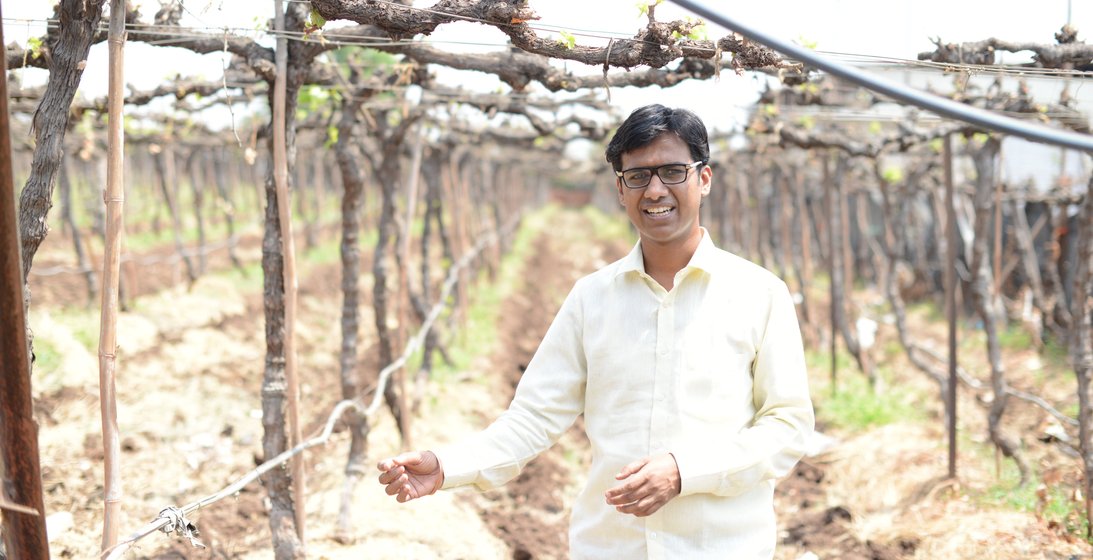 “We got just one rotation of water where we needed three. You could say one-and-a-half, but the first bit came too early, without notice,” says Prashant Nimse. He is a farmer in Nandurgaon, a village served by the left bank canal of the Gangapur dam. Nimse, who grows grapes, figs and other horticultural crops, says he only managed a decent income from the wedding hall he has built on his land. He gets a growing clientele for it as this village gets absorbed into Nashik city limits. “I survived, but those dependent entirely on farming, they were devastated.”

“The damage to the grape crop is crippling in many ways,” Vasudev Khate, another farmer downstream had told us. “The lack of water in the drought hits the harvest. Even where we manage a grape yield, it harms the quality. Remember that there’s about 100 mandays of labour per acre, per year. With 40,000 acres under that crop in trouble, it means labour is in distress, with the loss of close to 3 million workdays. Workers come here from outside, from Marathwada, including Latur, Beed, Aurangabad and Osmanabad.” The resultant loss of work exports distress back to thousands of households in Marathwada.

The rains have begun to spread in the state. Yet, many farmers, labourers and others know that the problem will not end with a good monsoon. “That will bring relief,” says photographer-purohit Akolkar,  “but the long-term crisis is growing and won’t go away.”

P. B. Misal, superintending engineer, irrigation, Nashik district, had a different take on the problem. “We never really had any perennial rivers in Maharashtra,” says Misal. “The last 20 years have seen a great depletion of ground water resources. Too much pumping for agriculture. Nashik city ‘s population has swollen to nearly 20 lakh including a floating population of some 3 lakh. Land use patterns have changed greatly. The green fields that surrounded the city are now mostly built up.” While he sees the rains as becoming more erratic, he finds the data do not show any “secular decline” in rainfall.  Environmental experts like Prof. Madhav Gadgil say that Maharashtra did have perennial rivers. But these  “have significantly been converted into seasonal ones.”

Which brings it all back to the role of human agency in Maharashtra’s mega water crisis. Trimbakeshwar’s   water problems resemble those we found at the source of the Krishna river in Old Mahabaleshwar in Satara district of Western Maharashtra. (Where too, my colleagues and I journeyed downstream in May: Source of the rivers, scams of the rulers .)

“Remember that Nashik has become a major industrial area. And that the water sharing systems of this region have changed,” says Akolkar.  “There is a huge, unregulated paani [water] market in every area, every locality. Even excellent rainfall has little impact on this. Tourism means every foot of the town is now concreted. The water has little room to flow or breathe.” 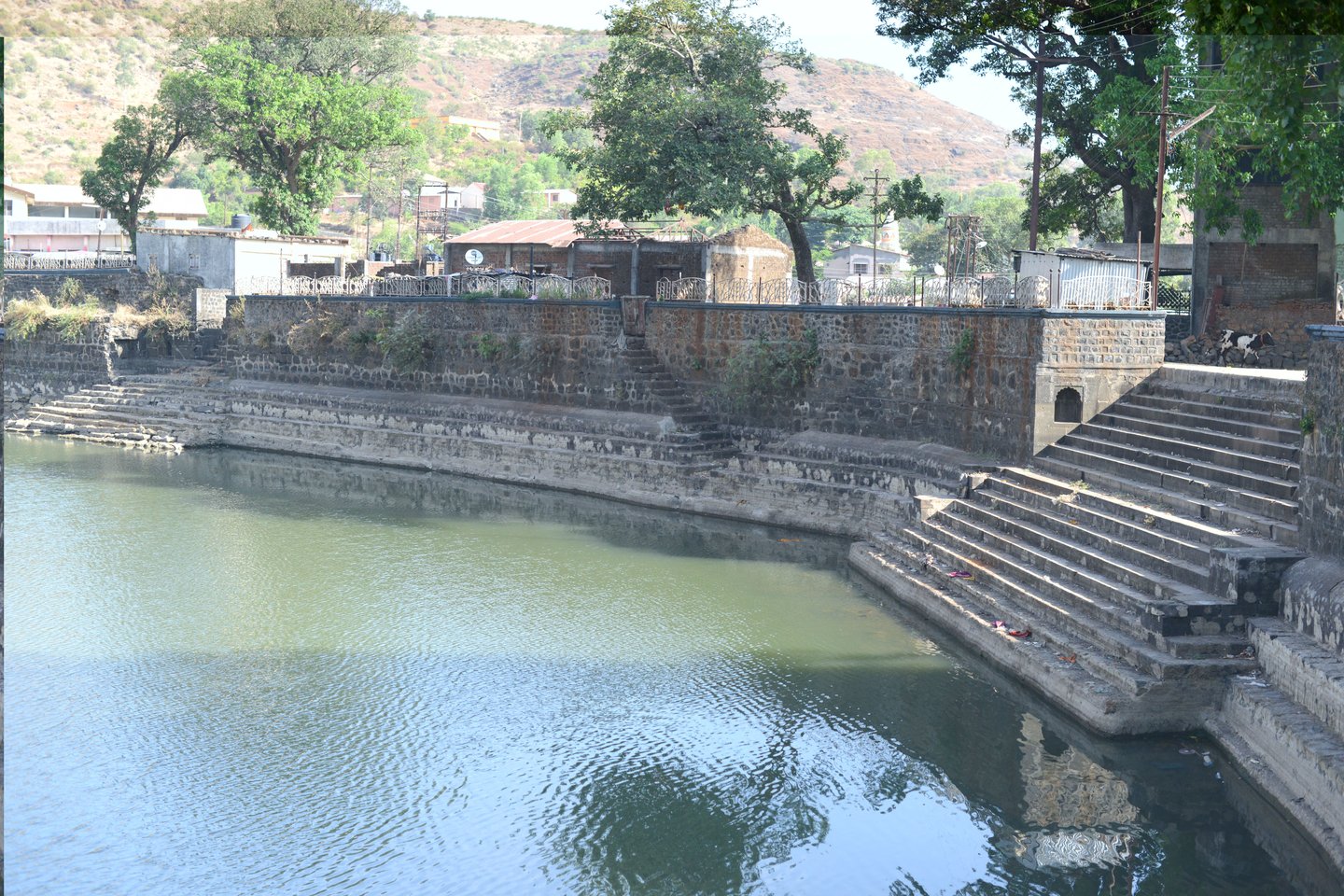 The many little streams that run down Brahmagiri into the Gangasagar tank at Trimbakeshwar  are just bald, white outlines on the side of the mountain. All of them that we could see were dry. Perhaps now, with the coming of the rains in the state, they might run live again.

Rampant deforestation, extensive damming of the rivers, huge diversions of water for  industrial and even lifestyle projects like elite resorts can be seen across the state. So too, the unrelenting concreting of the source areas of rivers, massive and unregulated extraction of groundwater and highly inequitable distribution of water between poor and better off. All these underlie Maharashtra’s terrible water crisis. One that won’t get washed away by the monsoon, even if media coverage of it dries up with the onset of the rains.