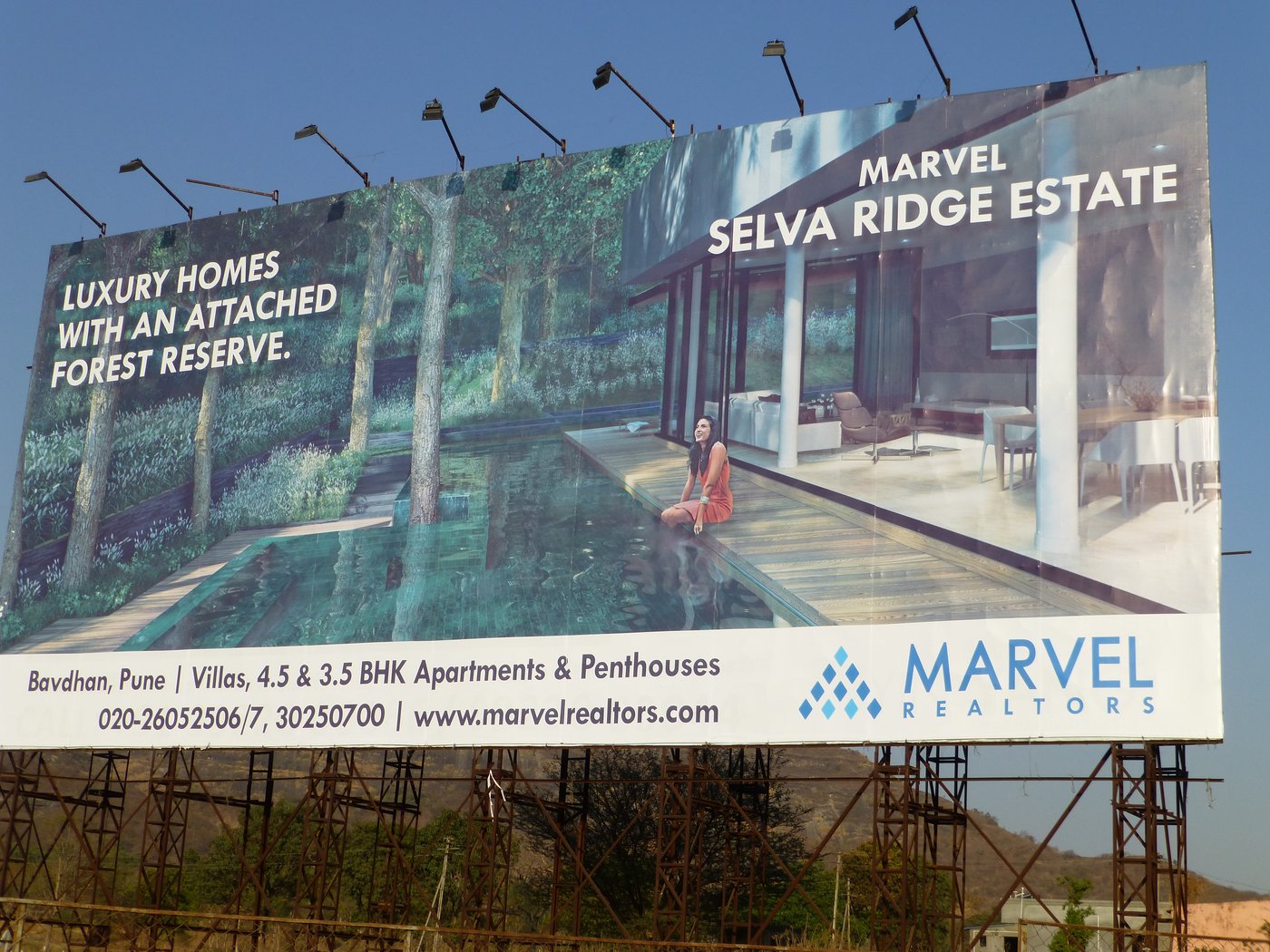 How the other half dries

Water-guzzling crops, water parks, luxury pools – they are all connected to Maharashtra’s drying lakes and rivers. Who owns or controls this resource will be even more crucial now

“Every apartment is a dream come true – the coronet that tops the king-sized lifestyle of true blue blood.” So run the ads. Yup. The blue bloods do it big. Each apartment has its own private swimming pool. These are, after all, “super-luxurious, supersized designer apartments.” The kind that “match the royal lifestyles.” There are also the villas the builders proudly announce as their “first gated community project.” And yes, each of them ranging from 9,000 to 22,000 square feet also offers its own private swimming pool. In yet other buildings coming up, the duplex penthouses will each have, you guessed it: private swimming pools.

These are just in Pune alone. All of them with other amenities needing still more water. A small but proud trend – with the promise of more to come. All of them in regions of a state lamenting their greatest drought in 40 years. In Maharashtra Chief Minister Prithviraj Chavan’s view, one of our worst droughts ever. In a state where thousands of villages now depend on visits from water tankers. A daily visit if you’re lucky. Once or twice a week if you’re not.

Yet, it’s as if there is no connection between the swimming pools and the drying lakes. There’s very little discussion about it, for sure. As little as there was during two decades when the state government rejoiced in the spread of dozens of “water parks” and water-theme entertainment parks. At one point, a score of them in the Greater Mumbai region alone.

Across the drought-hit regions of Maharashtra, despair grows. Over 7,000 villages are drought or scarcity-hit. Officially. Thousands of others are also in a bad way, but are not classified as drought-hit. Of those declared as affected, some will get a bit of help. The government runs water tanker visits for them. Thousands of others make direct deals with private tankers. Close to half-a-million animals are dependent on cattle camps. Distress sales of cattle go on briskly, too. Water in many reservoirs is below 15 per cent. In some, it is close to dead-storage levels. But far more than the searing drought of 1972, this is a man-made one. 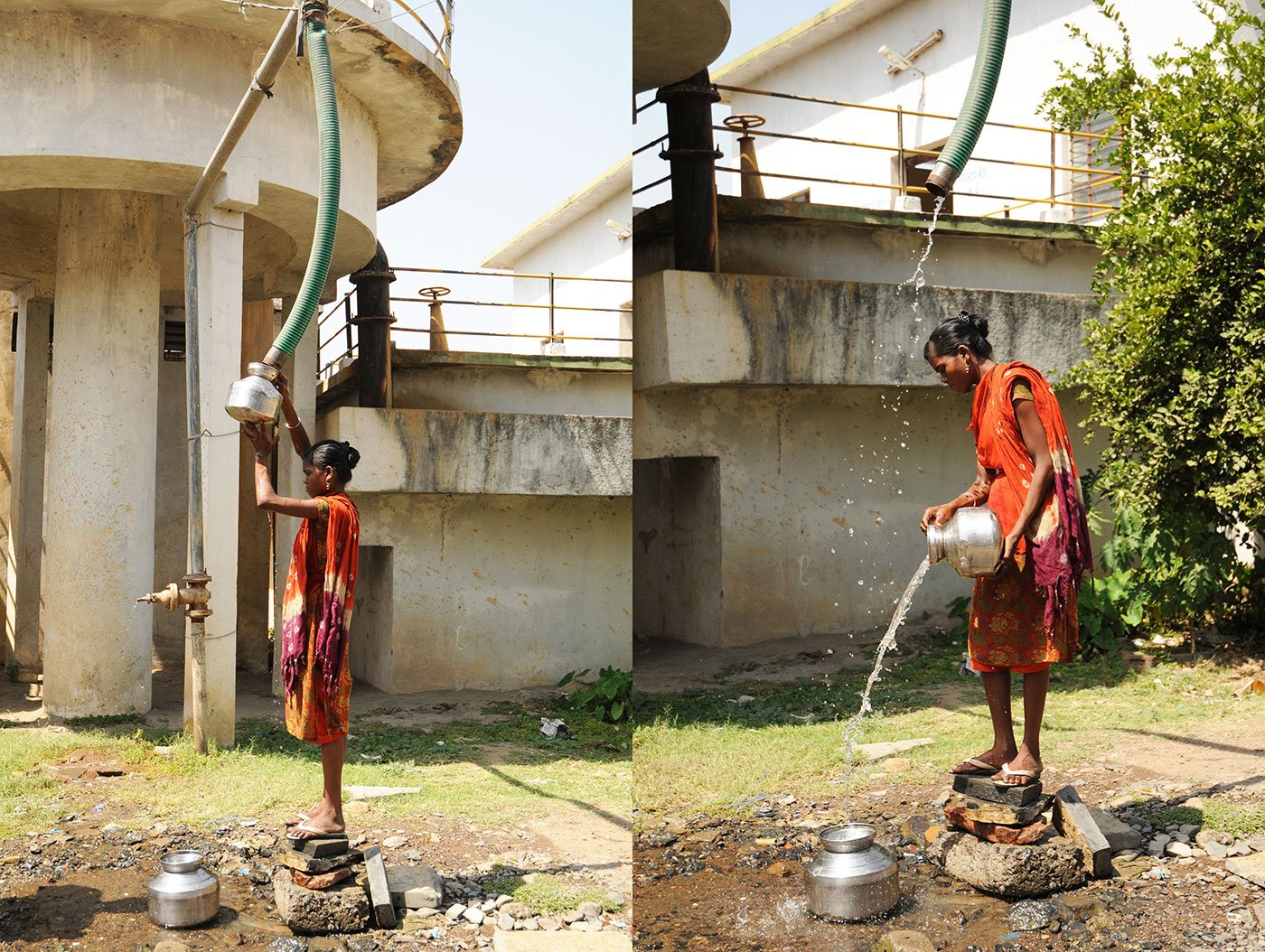 A manufactured drought: in rural Maharashtra, you take water when you find it and wherever you find it

There have been huge diversions of water in the last 15 years to industrial projects. And to private companies also in the lifestyle business. To cities from villages. Blood has been shed over such transfers. As in Maval in 2011, when police fired on angry farmers, killing three and wounding 19 others. They were protesting the government acquiring their land for a water pipeline from the Pavana dam to Pimpri-Chinchwad. The scale of water loss this implied drew thousands more into the protests as well. The state’s response at the time was to book around 1,200 people for “attempted murder.” And for rioting as well.

Deputy Chief Minister Ajit Pawar also did his best to lock in the control of industry over irrigation. He even tried to amend, for the worse, the already regressive Maharashtra Water Resources Regulatory Authority Act (2005). One new clause on his agenda would have barred any challenge to water-distribution policies.

The trends in diversion for lifestyle-entertainment though, are not new. In 2005, a huge 'Fun & Food Village Water & Amusement Park' popped up in Nagpur (Rural) district. That, in a period of real water stress. The 'fun' "village” had 18 kinds of water slides. It also had “India’s first snowdrome” along with an ice rink. It is not easy to maintain snow and ice in 47 degrees heat. That took huge amounts of electricity in a region seeing 15-hour power cuts. It also guzzled massive amounts of water.

This is also a state that added quite a few golf courses in the past decade or so. It now has 22, with more in the pipeline. Golf courses use huge amounts of water. This has often sparked conflicts with farmers in the past. Golf courses worldwide also use vast amounts of pesticide that can seep into, and affect, the water of others as well.

Besides, this is a state where we’ve seen angry protests over the water soaked up by private projects like Lavasa, “Independent India’s first hill city.” Sharad Pawar has drawn applause for ticking off his own party’s minister, Bhaskar Jadhav, for wasteful spending on a family wedding in a time of drought. But the Union agriculture minister has always been gung-ho about Lavasa. The project’s website noted quite a while ago that it has “permission to store” 0.87 tmc. That is 24.6 billion litres of water.

No state has spent more money to create less irrigation. The government of India's Economic Survey 2011-12 found that land under irrigation had gone up by just 0.1 per cent in a whole decade. Which still means that less than 18 per cent of cropped area in the state is irrigated. That’s after spending tens of billions of rupees to produce many millionaires and very little irrigation. The major transfers of water to industry also come in a time of agricultural decline. (A 23 per cent fall in foodgrain in 2011-12, according to the Economic Survey .)

Even as foodcrop declines, fully two-thirds of Maharashtra’s sugarcane is grown in drought-prone or water scarce areas. At least one Collector had called for sugarcane crushing in his district to be suspended during this crisis. The sugar factories there together use up to 90 lakh litres a day. Given the power the sugar barons wield, the Collector is more likely to be suspended than the crushing.

The water needed for one acre of sugarcane can irrigate 10-12 acres of foodcrops like jowar . More than half of Maharashtra’s irrigation water goes to this crop, which takes just 6 per cent of the cultivated area. Sugarcane requires “180 acre inches of water.” That is, 18 million litres per acre . Eighteen million litres can meet the domestic water needs of 3,000 rural households for a month (That’s based on a modest 40 litres a day per person). This in regions where the water table falls every year.

That has not deterred Maharashtra from encouraging rose cultivation – a very tiny trend but growing swiftly with the promise of more to come. Roses need even more water. They need “212 acre inches.” Which is 21.2 million litres of water per acre. Indeed, rose cultivation, small as it is, has been a cause for some celebration in the state. Exports this year went up by some 15-25 per cent. The rupee’s slide, an extended winter – and 'Valentine’s Day' – gifted rose growers this happy situation.

In the last 15 years, the only regulatory frameworks the State has put in place have led to greater privatisation of water. To quicker loss of community control over this natural resource. One that is rapidly depleting. At the same time, the unchecked exploitation of groundwater has made things a lot worse.

Maharashtra worked hard to get to the crisis it now faces. Private swimming pools amidst oceans of dry despair. For the rich, there is never a scarcity. For so many of the rest, their hopes evaporate by the day.

This article was originally published in The Hindu on February 28, 2013.