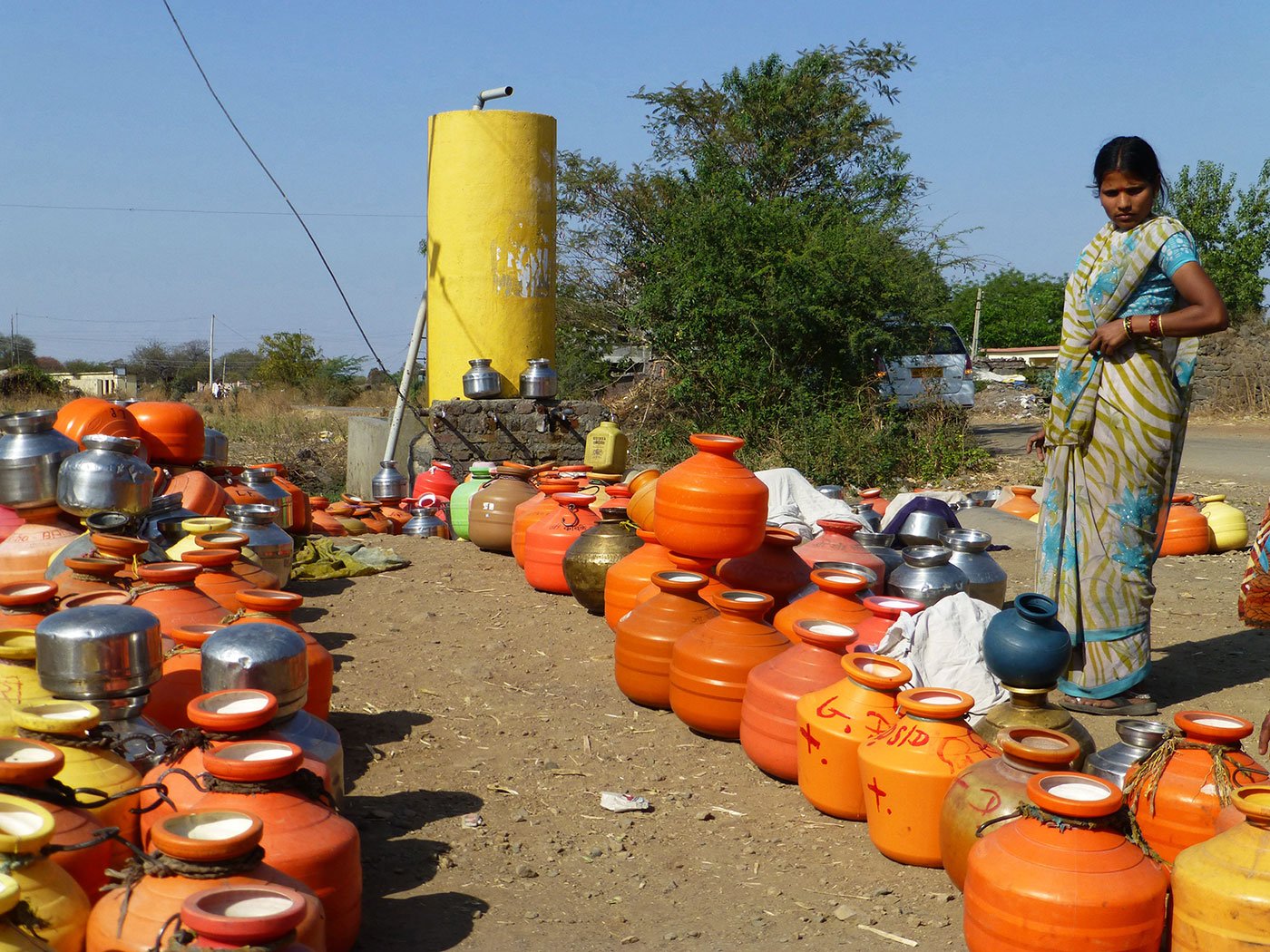 If drought is making many in Osmanabad struggle for survival, it is also boosting a 24-hour trade that thrives on scarcity

Bharat Raut spends around Rs.800 a month on petrol — just to fetch water that belongs to him. So do a lot of others in Takwiki village in Osmanabad district in Marathwada. Almost every household in Takwiki (and other villages) has one member locked into a single task each day: fetching water from wherever they can. Nearly every vehicle you see on Osmanabad’s roads is ferrying water somewhere. That includes cycles, bullock carts, motorbikes, jeeps, lorries, vans and tankers. And women carrying it in pots on their heads, hips and shoulders. The drought ensures that most do it for sheer survival. Some, for a neat profit. 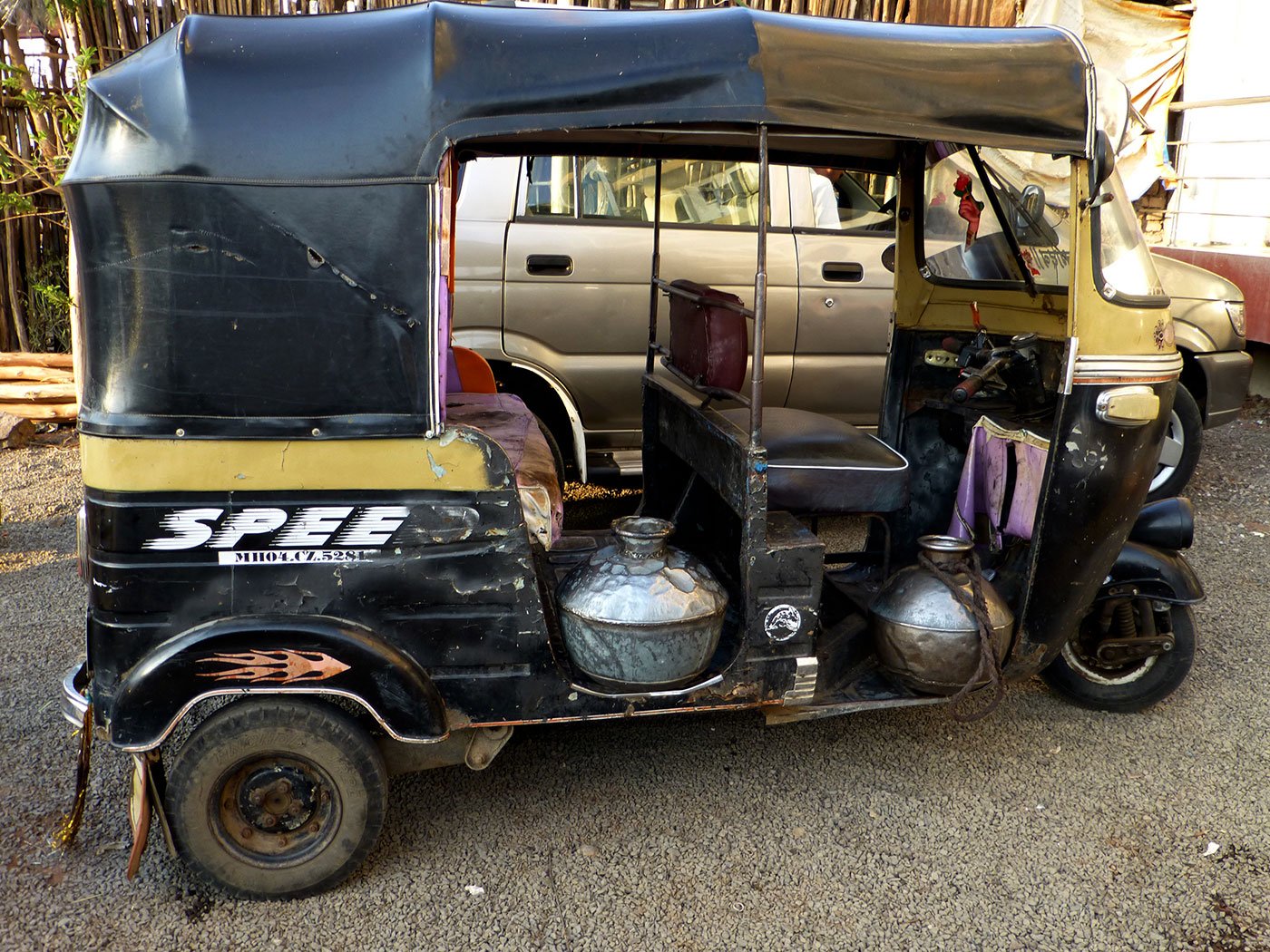 “Yes, every household has a person on full-time water duty,” says Bharat, a small farmer with five-and-a-half acres. In his family, he is the one. “I fetch the water that comes sporadically from the borewell on our own fields. But it’s a little over three kilometres away from home.” So Bharat hooks four ghadas (plastic pots) to his Hero Honda and makes three trips a day to his fields to return with around 60 litres of water each time. “I go there just for the little water the bore gives,” he says. “The crop itself is dying.” There are some 25 motorcycles in this village roving about on this task at any time. 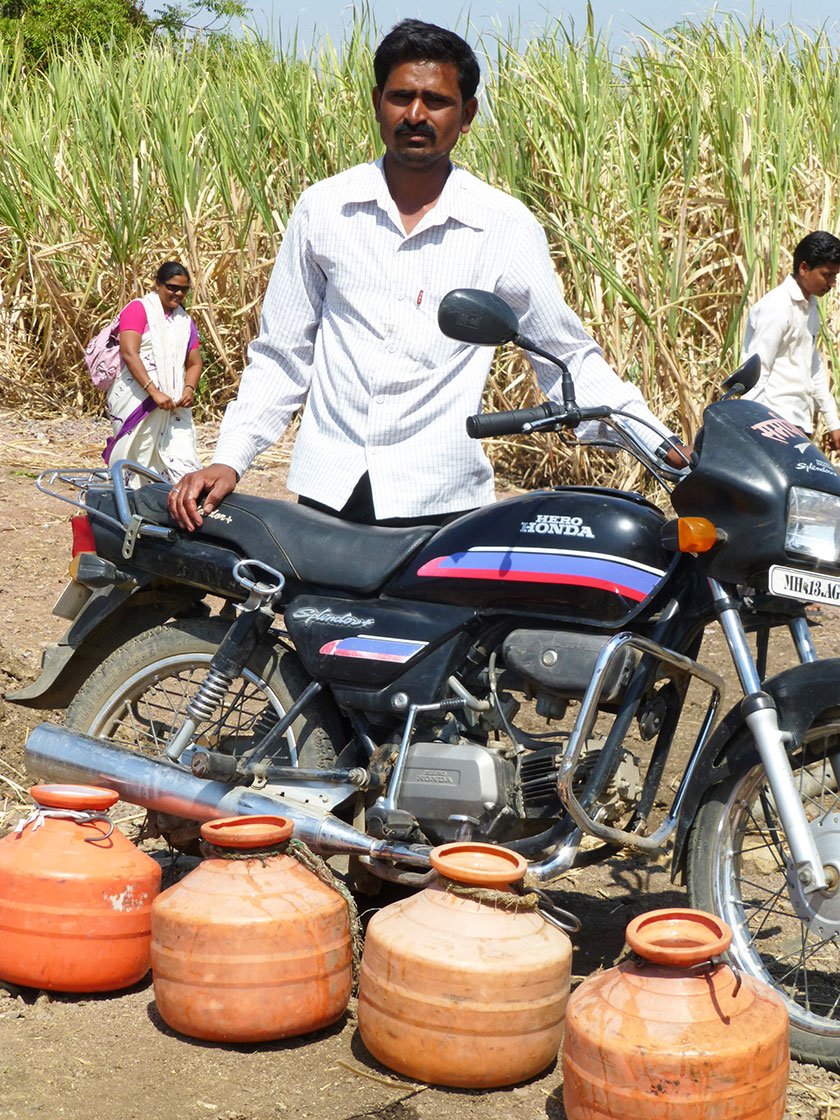 Since each round trip is over six kilometres, Bharat clocks close to 20 kilometres each day, or 600 kilometres a month. That takes up 11 litres of petrol, or around Rs. 800 a month for just this task alone. “The water timings alternate each week,” explains Ajay Niture, who visits a government-controlled source. “This week, we have power from 10 a.m. to 6 p.m., so we get water during those hours. Next week it will be from midnight to 10 a.m.” He does his two-three kilometre trips on a bicycle mounted with seven plastic pots. And he’s been to the local hospital twice – “it really hurts your shoulders.”

Landless workers run into trouble with employers. “Some days you turn up late. Some days you don’t make it at all,” says Jhambhar Yadav. “That delays chores like feeding the animals, which is bad. And this has been on for five months now.” Jhambhar has already made two trips with six ghadas on his cycle this morning.

Yet their efforts are eclipsed by the women of Takwiki who do multiple trips daily on foot, carrying two to three pots with them. “That’s 8-10 hours a day on the job,” they explain at one of the water sources where they’ve congregated. They also tell us of their recycling of water: “First we use it for a bath. Then we use that same water for washing clothes. And finally for cleaning the utensils.” The distances the women walk are often greater than those covered by the men on motorbikes. They do far more trips and log over 15-20 kilometres in a day. The stress causes several to fall ill. 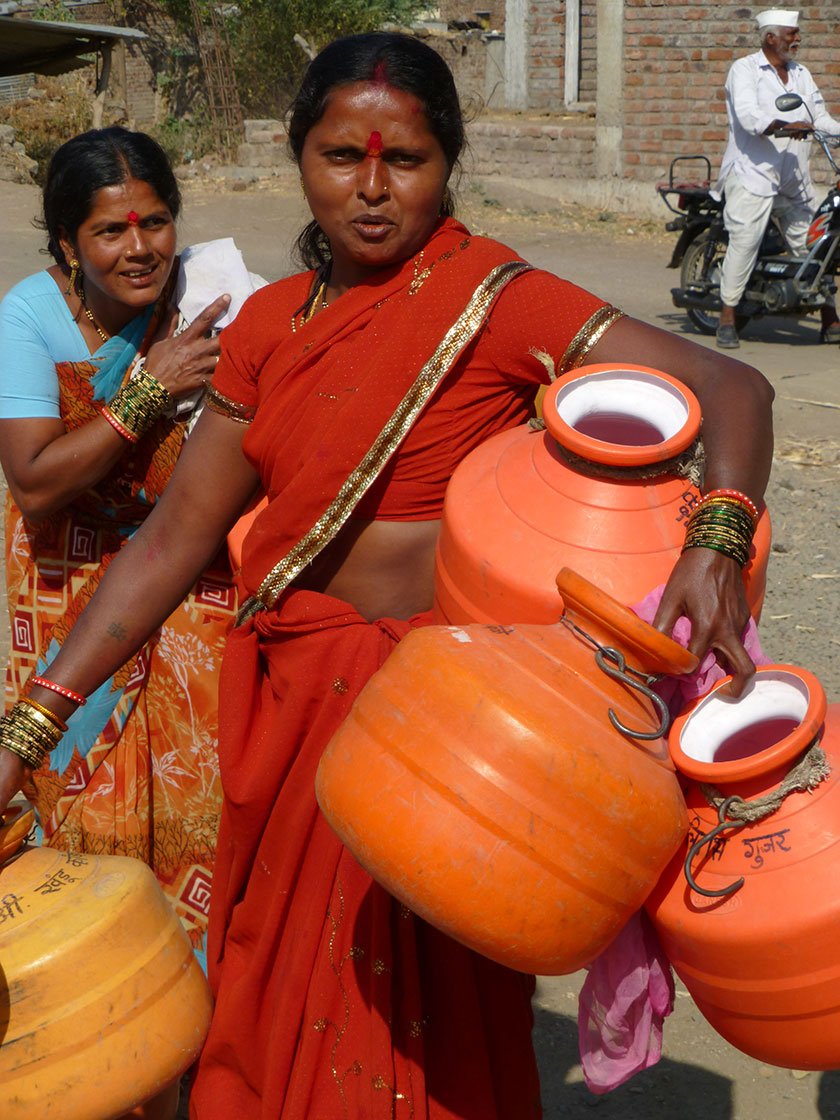 Women in Takwiki explain their water recycling routine: “First we use it for a bath. Then we use that same water for washing clothes. And finally for cleaning the utensils”

Women like Phulwantibai Dhepe have it worse. She is a Dalit and therefore excluded from many water sources. Even at the government-acquired well from where she fetches water, “I am always last in the line.”

Scarcity has an impact on livestock too. With little water and less fodder, “those like me who sell milk are in a bad way. My cows are suffering and so am I. I used to make Rs. 300 a day selling milk,” says Suresh Ved Pathak. “Now the yields have fallen and I make just a third of that.”

Takwiki is a microcosm of Osmanabad’s built-in problems. The village has less than 4,000 people, but maybe 1,500 borewells for irrigation needs. “The ones being drilled now are going to 550 feet and beyond,” says Bharat Raut. And the main crop in this drought-prone district is sugarcane. “We got 397 mm of rainfall least season, as against our normal average rainfall of 767 mm,” says Osmanabad Collector K. M. Nagargoje. “In itself, 800 mm is not at all bad rainfall. And some regions get by on 400 mm, too.”

But you can’t get by, even on 800 millimetre if your output is 2.6 million metric tons of sugarcane. A crop that demands roughly 18 million litres of water per acre. (Enough to fill seven-and-a-half Olympic swimming pools.) And the number of farmers who can afford to save on water by using drip is very small, just a handful in Takwiki.

Collector Nagargoje has serious trouble on his hands. And having had a stint with the Groundwater Department, he knows it. Almost all the district’s big or medium water projects are at dead storage level. That’s when water is below the point from where it can be pumped out or controlled. At that stage, it serves to keep the fish alive. He does have around 3.45 million metric cubic feet left in the district’s small projects. That can’t last too long in this district of 1.7 million people. He also has 169 water tankers presently serving two towns and 78 villages. And a district where private borewells for irrigation are spreading rapidly.

“The groundwater table this January was at around 10.75 metres. That’s five metres below the five-year average in this region,” he says. “In some blocks, it’s even lower.” He remains optimistic about the district’s capacity to handle the crisis this year. But knows the existing cropping patterns will thwart rescue plans in the next one.

Back in Takwiki, indebtedness grows as income falls. “The sahucari (money lending) rate here is now anything between Rs. 5 to Rs.10 per hundred per month, explains Santosh Yadav. (That’s 60 to 120 per cent annually.) Yadav’s own family spent nearly Rs.10 lakhs in laying down pipelines – all of which have run dry – to their fields. And summer isn’t far away. Yadav asks: “Who can think of that? We’re focused on getting past today. One day at a time is all we can handle.” 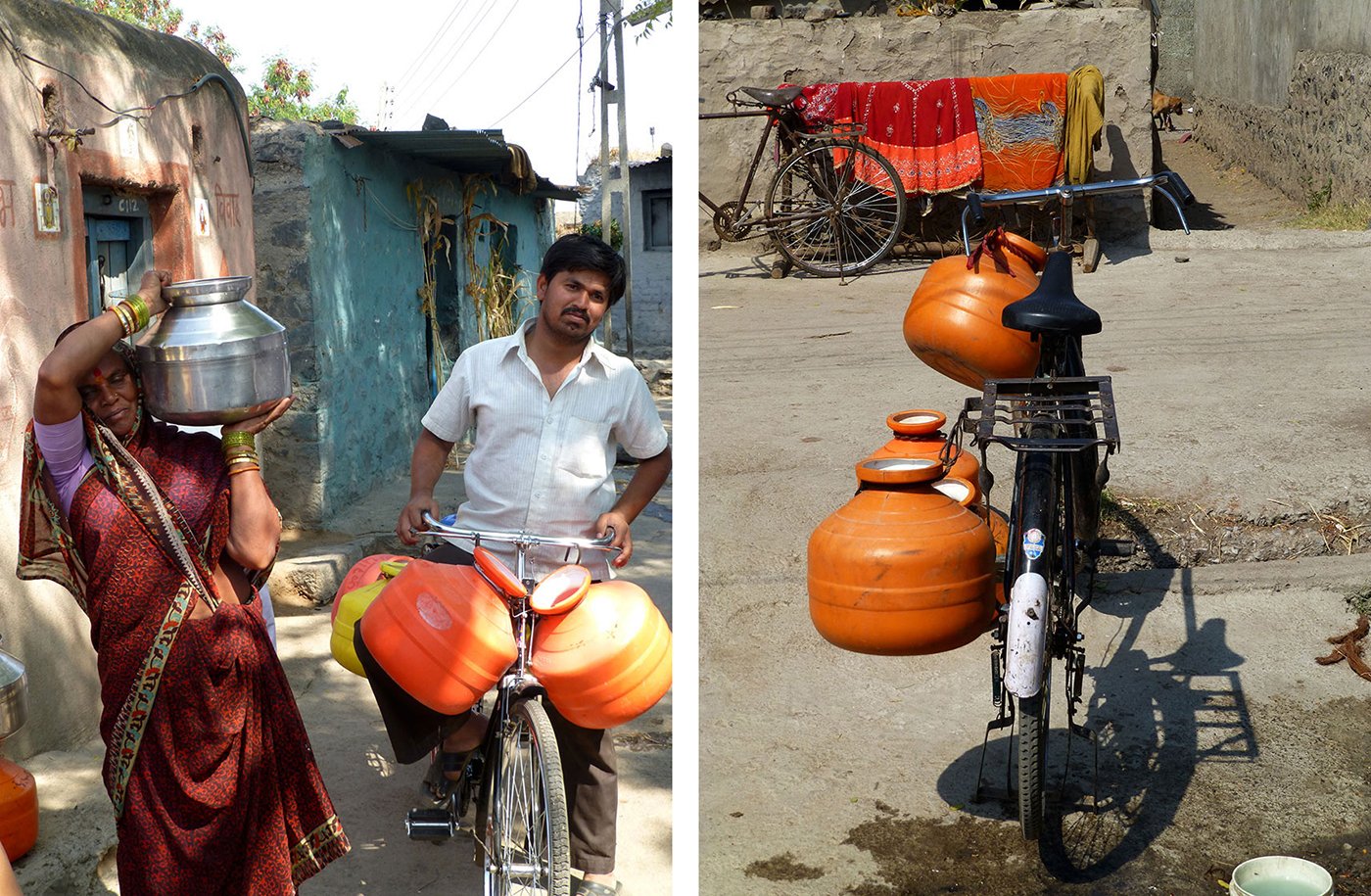 In every lane of the villages of Osmanabad, people move about at all hours collecting water

But if the drought makes many struggle for survival, it also boosts a trade that thrives on scarcity. This is visible everywhere. “We spend whole days on cell phones trying desperately to buy water from those who have it because they own borewells or some other source,” says Bharati Thawale, a social worker. “I struck a deal with one of these water-sellers. He was to give me 500 litres for Rs.120. But on the way he got offered Rs. 200 for it and sold out. Many frantic calls later, he brought me the water I needed, at 9 p.m. the next night.” After that, she’s been buying water from a neighbour.

The brisk trade in water is on around the clock across the district. Scarcity drives the rates upwards. The government has requisitioned 720 wells of water. It pays the owners of each of these Rs.12,000 a month. Water from these is free for the public. But the long distances and the huge crowds at these points can be daunting. Which means privateers rule. With them, you bargain by the litre. The price can go well above Rs. 200 for 500 litres. The rate spikes sharply if you are buying small quantities. And it will all get worse in the coming days. Every colony now has someone with a borewell or other source, milking the scarcity. Here, water flows like money.

This article was originally published in The Hindu on March 6, 2013.

Also read: Tankers and the economy of thirst