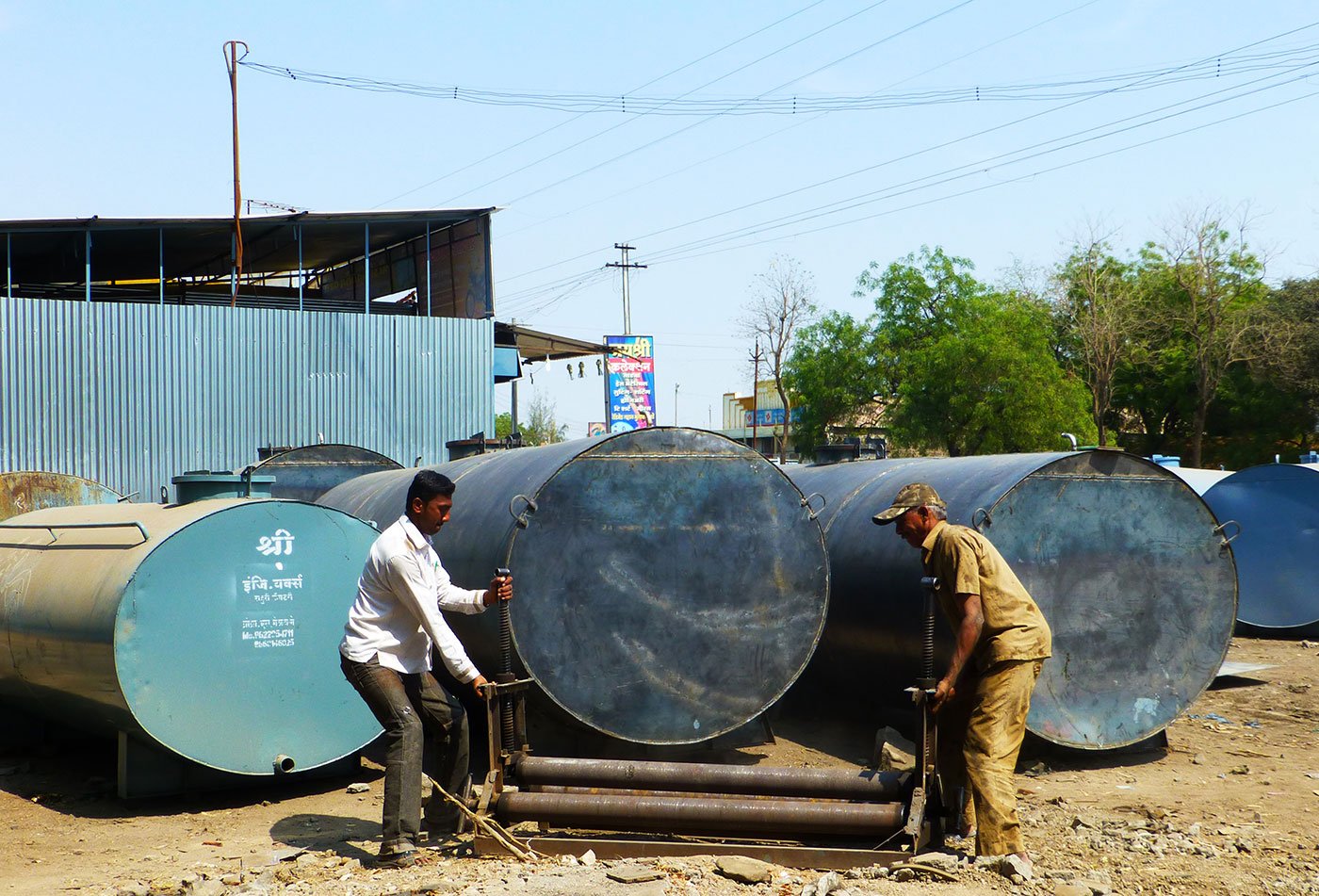 Tankers and the economy of thirst

The water markets of Marathwada are booming, and in the town of Jalna alone, tanker owners can reach sales of close to Rs. 1 crore each day

Thirst is Marathwada’s greatest crop this season. Forget sugarcane. Thirst, human and industrial, eclipses anything else. Those harvesting it reap tens of millions of rupees each day across the region. The van loads of dried-out cane you see on the roads could end up at cattle camps as fodder. The countless “tankers” you see on the same roads are making it to the towns, villages and industries for profit. Water markets are the biggest things around. Tankers are their symbol.

Thousands of them criss-cross Marathwada daily, collecting, transporting and selling water. Those contracted by the government are a minority and some of them exist only on paper. It’s the privately-operated ones that are crucial to rapidly expanding water markets.

So what is a tanker? Really, just sheets of mild steel plate rolled into big drums. A 10,000-litre water tanker consists of three sheets of 5 feet x 18 feet, each weighing 198 kilograms. The rolled drums are welded together. These can be carried by trucks, lorries and other large vehicles, mounted on them in different ways. Smaller carriers transport cylinders of lower capacity. A 5,000 litre container can go onto the trailer of a big van. It comes all the way down to 1,000 and 500-litre drums that move on mini-tractors, opened-up auto rickshaws and bullock carts.

As the water crisis deepens, hundreds of these are fabricated across the state each day. In Jalna town of Jalna district, there are about 1,200 tankers, trucks, tractors, and auto rickshaws flitting about with containers of different sizes. They shuttle between their water sources and desperate sections of the public. The drivers bargain with clients on cell phones. However, the largest amount of water goes to industries that buy in bulk. “The tanker owners transact between Rs. 6 million to Rs. 7.5 million in sales each day ,” says Laxman Raut of the Marathi daily Loksatta . “That’s what this single sector of the water market is worth – in this single town." Raut and his fellow reporters have tracked this region’s commerce in water for years.

Container sizes vary. But in this town, Raut says, “their average capacity works out to around 5,000 litres. Each of these 1,200 does at least three trips a day. So they carry in all some 18 million litres of water in 24 hours. At the going rate of Rs. 350 per thousand litres, that works out to over Rs. 6 million a day. The costs can go up depending on whether the use is domestic, or for livestock, or industry.”

Scarcity drives the tanker economy. Tankers are being made, repaired, rented, sold and bought. One busy spot we hit en route to Jalna is Rahuri in neighbouring Ahmednagar district. It costs roughly Rs. 30,000 to make a 10,000-litre tanker body here. It sells for twice that sum. In Rahuri Factory, a small industries area, we get a crash course in tanker tech. “Each 5 feet x 18 feet sheet of MS Plate is 3.5 mm thick (called Gauge 10),” explains Shrikant Melawane, who owns a fabricating unit. He shows us the “rolling machine” on which each plate has to be manually rolled. 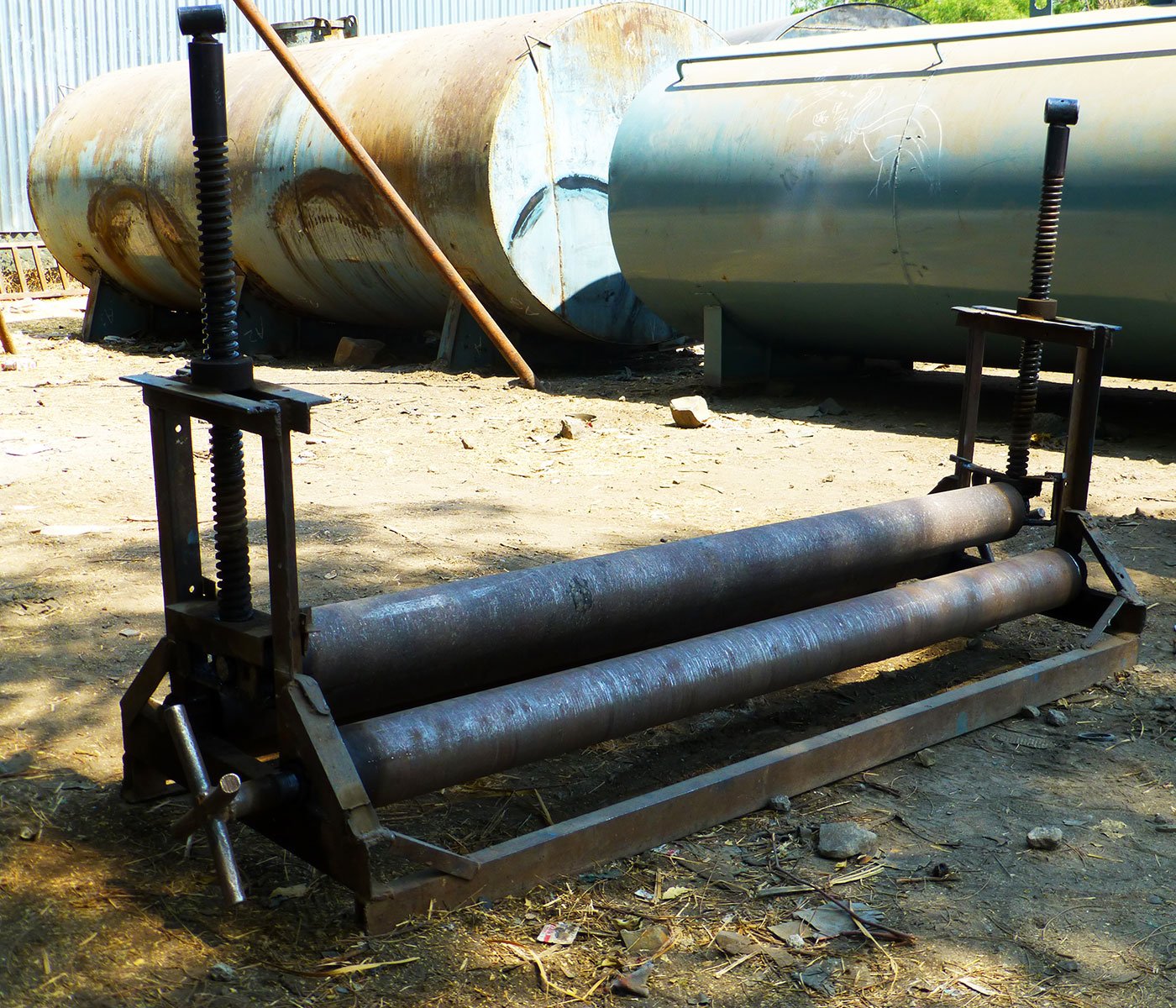 “The 10,000-litre one weighs close to 800 kilos,” he says. The three sheets of mild steel it requires cost roughly Rs. 27,000 (at Rs. 35 a kg). Labour charges, electricity and other expenses total a further Rs. 3,000. “It takes a whole day to make one 10,000-litre tanker,” he says. “This season has been busy. We’ve made 150 (of differing sizes) in three months.” There are four units like his within a radius of one kilometre, churning them out at the same pace. And 15 within a three-kilometre radius of Ahmednagar town, on the same job.

“The biggest ones – 20,000-litre tankers, go to cattle camps and industrial units,” says Melawane. “The 10,000-litre ones go to the cities and big towns. The smallest ones I’ve made carry just 1,000 litres.” The little ones “are bought by small horticulturists. Mostly tiny pomegranate growers who cannot afford drip irrigation. They take these drums on bullock carts and I’ve seen them do the watering manually.”

So where’s the water coming from? From rampant groundwater exploitation. From private borewells – some newly drilled just to exploit the scarcity. These could run out as the groundwater crisis worsens. Speculators have purchased existing dug wells that do have water in order to cash in. Some bottled water plants in Jalna town bring it all the way from Buldhana (in Vidarbha) – itself a high water-stress district. So the scarcity should spread to other regions fairly soon. Some are looting water from public sources, tanks and reservoirs.

“More than 50,000 (medium and big) tankers have been made across the state this year,” says former Member of Parliament (and ex-Member of the state Legislative Assembly) Prasad Tanpure. “And don’t forget the existing thousands from previous years. So it’s anyone’s guess how many are in action now.” Tanpure, a political veteran here, knows the water scene well. Other estimates place the new tanker numbers at 1 lakh.

Even 50,000 new tankers would mean that fabricators in the state have done close to Rs. 2 billion worth of business over the past few months. Of course, some have taken a hit on other fronts as “construction work stands suspended. No grills, beams, nothing else,” says Melawane. But there are also those jumping into this lucrative market. Back in Jalna, Suresh Pawar, a tanker-maker himself, says: “There are over 100 fabricators around this town. That includes 90 who had never done this work before but are doing it now.”

In Shelgaon village of Jalna district, farmer (and local politician) Deepak Ambore is spending around Rs. 2,000 a day. “I get five tanker-loads of water daily to my 18 acres, including my five-acre mosambi [sweet lime] orchard. I have to borrow from a sahucar [moneylender].” Why spend so much when the crop seems doomed? “Right now, just to keep my orchard alive.” Moneylending rates here can be 24 per cent a year or higher.

Things are awful but not at their worst. Not yet. Many in Jalna have lived off tankers for years now. Only the dimensions of the crisis and the numbers of tankers have exploded. The worst is a long way off yet, and it isn’t just about rainfall. Except for some. As one political leader puts it cynically: “If I owned 10 tankers, I’d have to pray for drought this year, too.”

This article was originally published in The Hindu on March 27, 2013 .