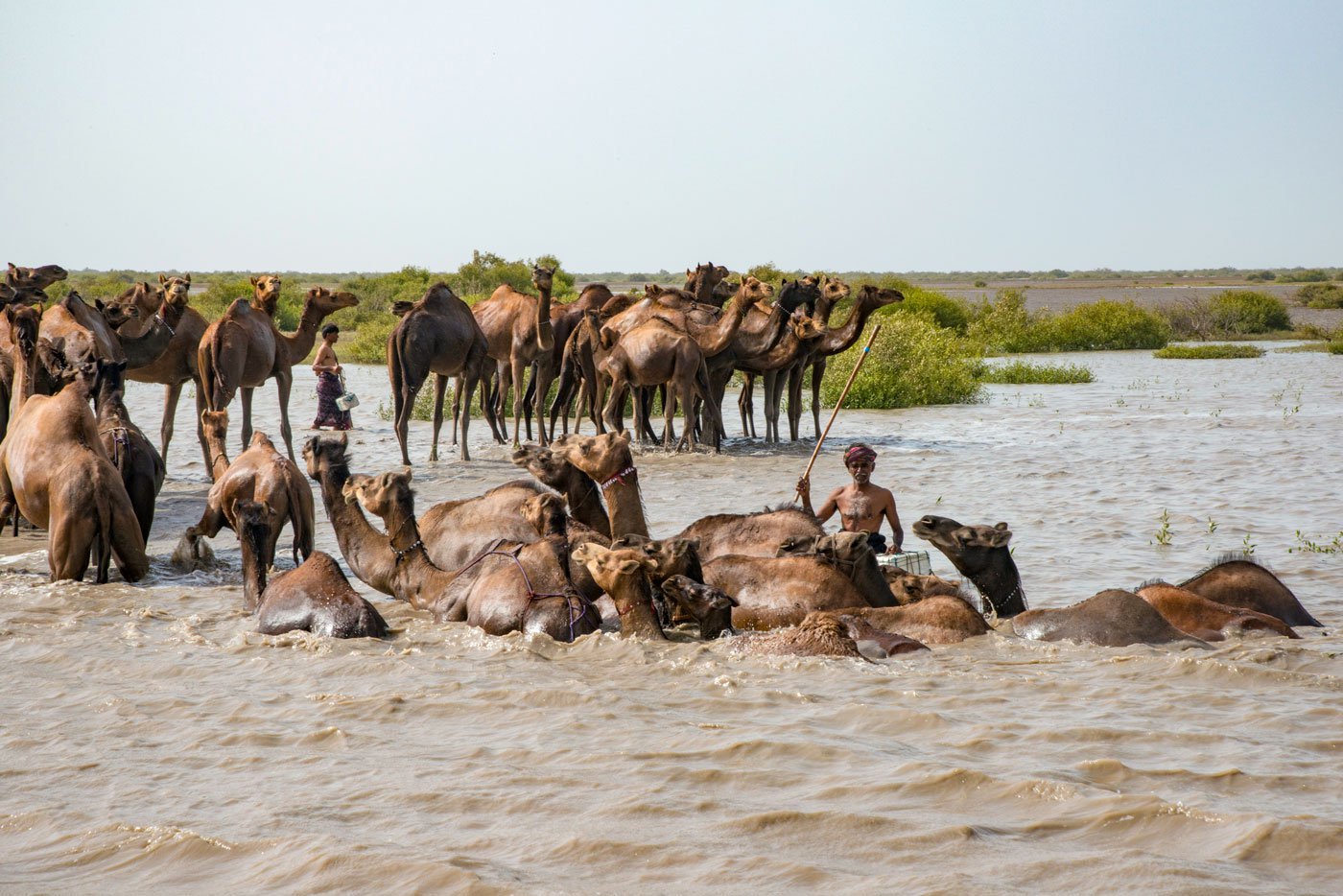 State policies’ dismissal of traditional knowledge of the pastoralist communities endangers the lives of Kharai camels and their herders in and around the Marine National Park and Sanctuary in Jamnagar, Gujarat

“Please don't go too close to them. They might get scared and run away. Then it will be a tedious job for me to even find them in this vast area – let alone regulate their movement,” says Jethabhai Rabari.

‘Them’ and ‘they’ are the prized camels the pastoral nomad is talking about. And they’re swimming around in search of food.

Well, yes. The ‘vast area’ Jethabhai is referring to is the Marine National Park and Sanctuary (MNP&S) which lies along the southern coast of the Gulf of Kachchh. And here, herds of camels tended by nomadic pastoralist bands do swim from island to island searching for mangroves ( Avicennia marina ) – essential to their diet.

“If these breeds don't eat mangroves for a prolonged period, they can get sick, weaken and even die” says Karu Meru Jat. “So inside the marine park, our herds of camels move around looking for mangroves." 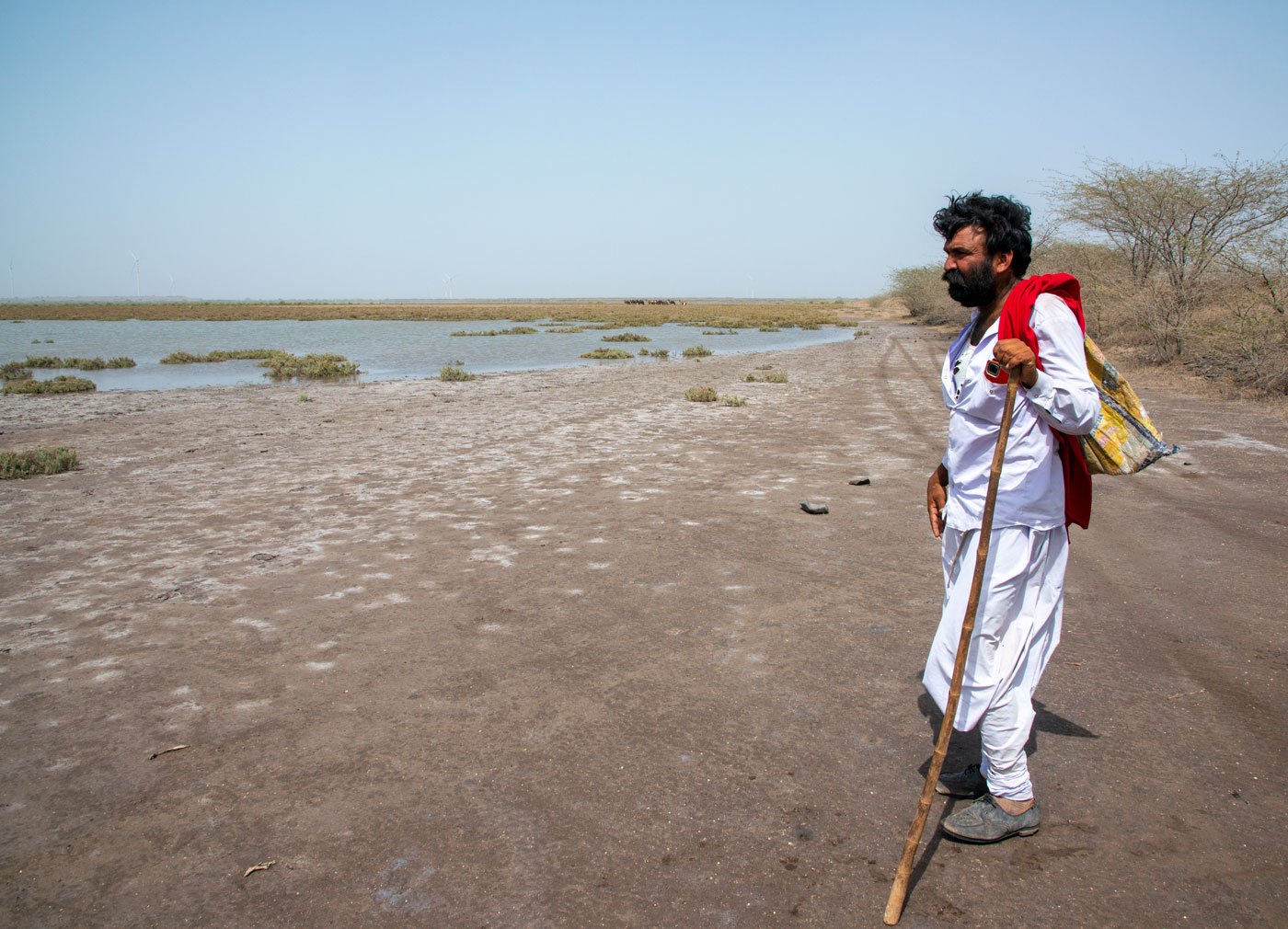 The MNP&S comprises 42 islands of which 37 fall under the Marine National Park and the remaining 5 come under the Sanctuary area. The whole zone stretches across the districts of Jamnagar, Devbhumi Dwarka (carved out of Jamnagar in 2013) and Morbi, in the region of Saurashtra, Gujarat.

“We have all lived here for generations,” says Musa Jat. Like Karu Meru, he’s a member of the Fakirani Jat clan living within the Marine National Park. There’s one more group like his residing within the MNP&S – the Bhopa Rabari (also spelt as Rebari) clan to which Jethabhai belongs. Both groups are traditional herders, called ‘maldhari’ here. In the Gujarati language ‘mal’ refers to animals, and ‘dhari’ means guardian or possessor. Across Gujarat, the maldharis rear cows, buffaloes, camels, horses, sheep and goats.

I’m meeting members of both these groups who live in villages along the periphery of the marine park that are home to around 1,200 people.

“We do value this land,” says Musa Jat. “The Raja of Jamnagar invited us to settle here ages ago. Long before this place was declared a marine national park in 1982.” 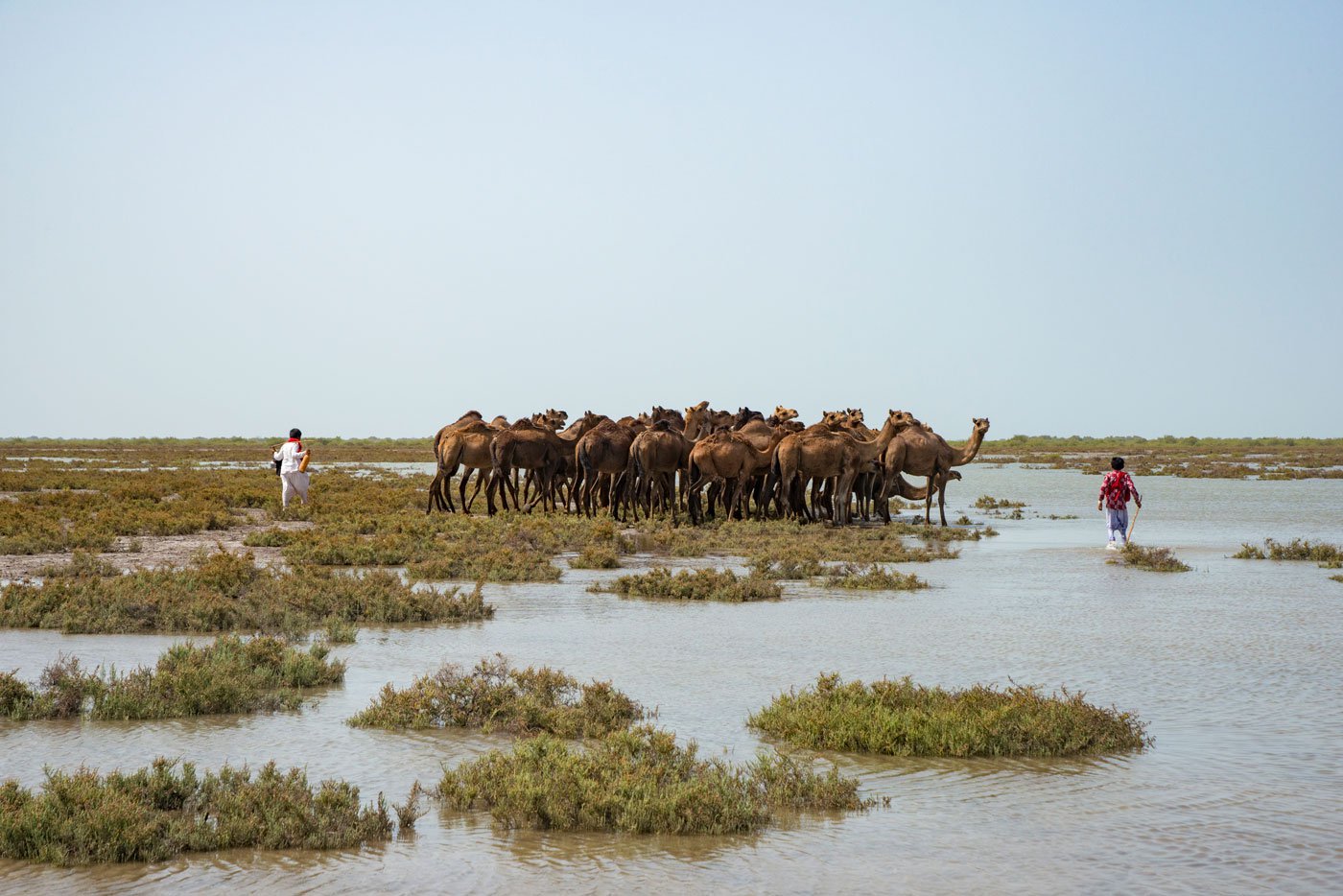 That’s a claim Rituja Mitra of the NGO Sahjeevan, which runs the Centre for Pastoralism in Bhuj, backs up. “It is said that a prince of the region escorted groups of both clans to his newly formed kingdom of Navanagar, later to be known as ‘Jamnagar’. And since then, the descendants of those pastoralists have been dwelling on these lands.

“The names of a few villages in these regions also suggest they’ve been around a long while,” says Rituja who is the state coordinator, Forest Rights Act, at Sahjeevan. “One such village is Unthbet Shampar – which roughly translates as 'Island of Camels’.”

Besides, the camels must have been here a very long time to have evolved as swimmers. As researcher Lyla Mehta of the Institute of Development Studies at Sussex puts it : “Why would the camels be able to swim if they did not coexist with mangroves traditionally?”

There are some 1,184 camels that might graze within the MNP&S, Rituja tells us. And these are owned by 74 maldhari families.

Jamnagar was founded in 1540 CE as the capital of the then princely state of Navanagar. The maldharis first came here at some point in the 17th century and have been here, they say, ever since. 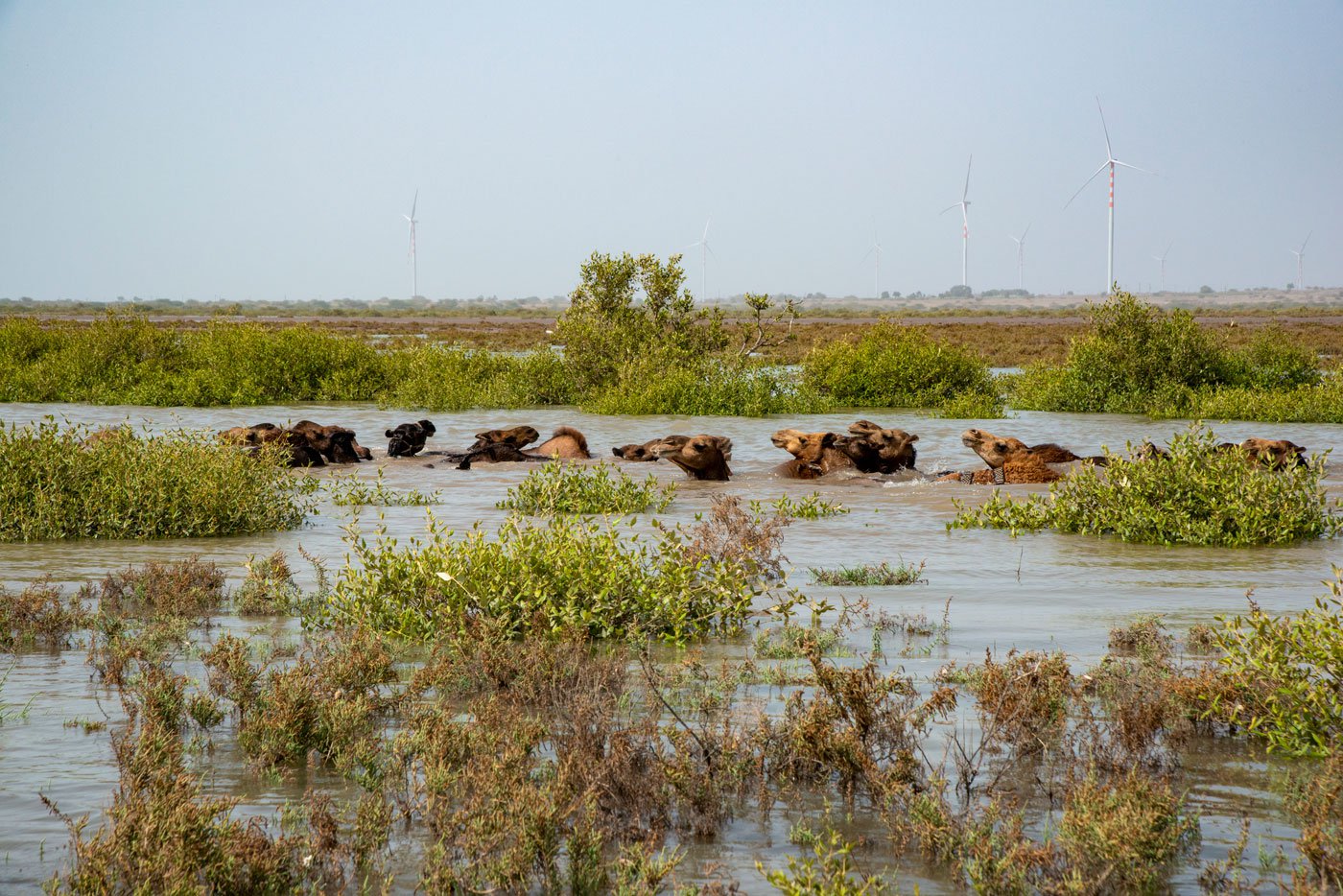 It’s not difficult to see why they “do value this land.” Especially if you are a pastoral nomad who understands and lives with the astonishing marine diversity here. The park includes coral reefs, mangrove forests, sandy beaches, mudflats, creeks, rocky coastline, seagrass beds and more.

The uniqueness of this ecoregion is well documented in a 2016 research paper published by the Indo-German Biodiversity Programme, GIZ. The area is home to over 100 species of algae, 70 species of sponges, and over 70 kinds of hard and soft corals. That’s besides 200 types of fish, 27 kinds of prawns, 30 types of crabs and four varieties of seagrasses.

Nor does it end there. As the paper records: you can also find here, three species each of sea turtles and sea mammals, more than 200 sorts of molluscs, over 90 types of bivalves, 55 kinds of gastropods, and 78 species of birds.

Here, the Fakirani Jats and Rabaris have grazed Kharai camels for generations. ‘Kharai’ in Gujarati means ‘salty’. The Kharai camel is a special breed that has successfully acclimatised to an ecozone very different from those you’d normally associate with camels. Their diet includes various plants, shrubs, and very importantly, as Karu Meru Jat tells us, mangroves.

These animals – the only dromedaries known to swim – are accompanied by a team of herders from the particular maldhari unit or clan that owns them. That normally consists of two maldhari men who swim alongside the camels. Sometimes, one of them uses a small boat to ferry food and drinking water, and also to return to the village. The other herder stays on the island with the animals, where he supplements his light meals with camel milk, an essential part of their community’s diet. 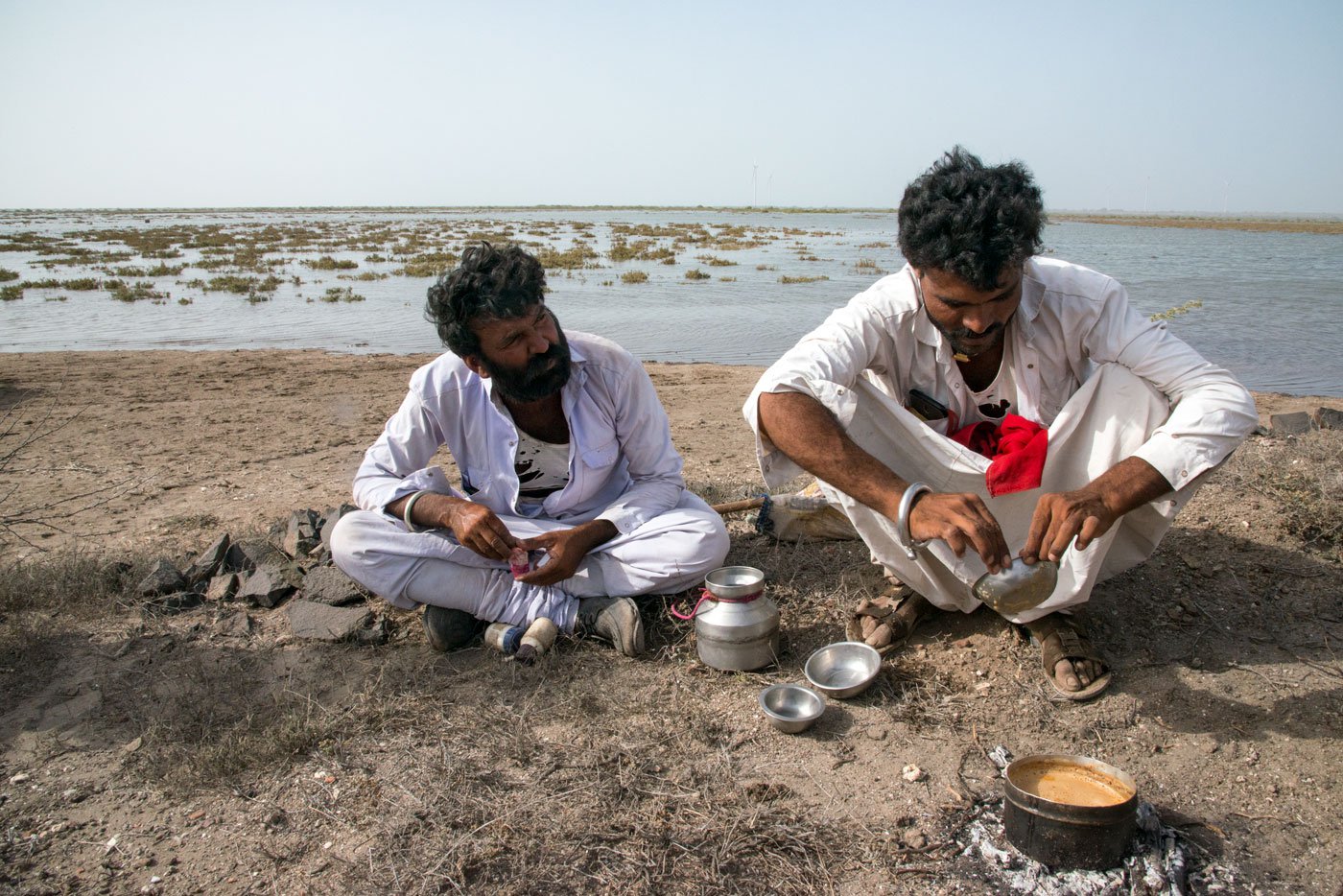 For the maldharis , though, things are changing fast – for the worse. “It’s getting harder to sustain ourselves and our occupation,” says Jethabhai Rebari. “Our grazing ground has shrunk with more and more of this area being brought under forest department control. Earlier, we used to have open access to the mangroves. Since 1995, grazing has been banned. Then there are the salt pans that trouble us. Besides, there’s hardly any scope for migration left. On top of it all – now we face the charge of overgrazing. How is that even possible?”

Rituja Mitra, who has for long worked on FRA in this area, supports the pastoralists’ claim. “If one looks into the grazing [or rather, browsing] patterns of camels, they tend to prune the plant species from the top, which actually helps in regeneration! The bets [islands] of the Marine National Park have always been a hotspot for the endangered Kharai camel, which feeds on mangroves and their associate species.

The forest department believes otherwise. Some of the papers it has authored, and those by some academics too, claim there is enough evidence to prove that camel browsing leads to ‘overgrazing’.

As the 2016 research paper points out, there are multiple reasons for the loss of mangrove cover. It connects that loss with the fallout of industrialisation and other factors. It does not anywhere blame the erosion of that cover on the maldharis and their camels.

Those multiple factors are significant.

Jamnagar and surrounding areas have seen quite some industrialisation since the 1980s. “There is the effect of salt pan industries, oil jetties, and other industrialisation in these areas,” points out Rituja. “They face few difficulties in having land diverted for their use – for their ease of business! But the department becomes conservationist when it comes to the subsistence occupation of pastoralists. Which, incidentally, runs counter to Article 19(g) of the Constitution, which guarantees the right ‘to practise any profession, or to carry on any occupation, trade or business’.”

Since pastoralist grazing is banned inside the marine park, camel herders often face harassment from the forest department. Aadam Jat is among those maldharis who have suffered. “A couple of years ago,” he says, “I was detained by forest officials for grazing camels here and paid a fine of Rs. 20,000.” Other pastoralists here, too, tell us of similar experiences.

“The central government's legislation of 2006 is still of no help,” says Rituja Mitra. Under the Forest Rights Act 2006, Section 3(1)(d) provides community rights of uses and grazing (both settled or transhumant) and traditional seasonal resource access of nomadic or pastoralist communities.

“Nonetheless, these maldharis are routinely penalised by forest guards for grazing, and often end up paying Rs. 20,000 to Rs. 60,000 when caught,” says Rituja, adding that the various safeguards set up on paper under the FRA remain non-functional.

It somehow seems futile to try and expand mangrove cover without involving pastoralists who have lived here for generations and know this complex zone better than anyone else. “We understand this land, understand how the ecology works, and we are also not against the government policies they make to protect the species, the mangroves,” Jagabhai Rabari says. “All that we ask is: please hear us before making any policies. Or else the lives of around 1,200 people residing within this area will be at stake, and so too the lives of all those camels.” 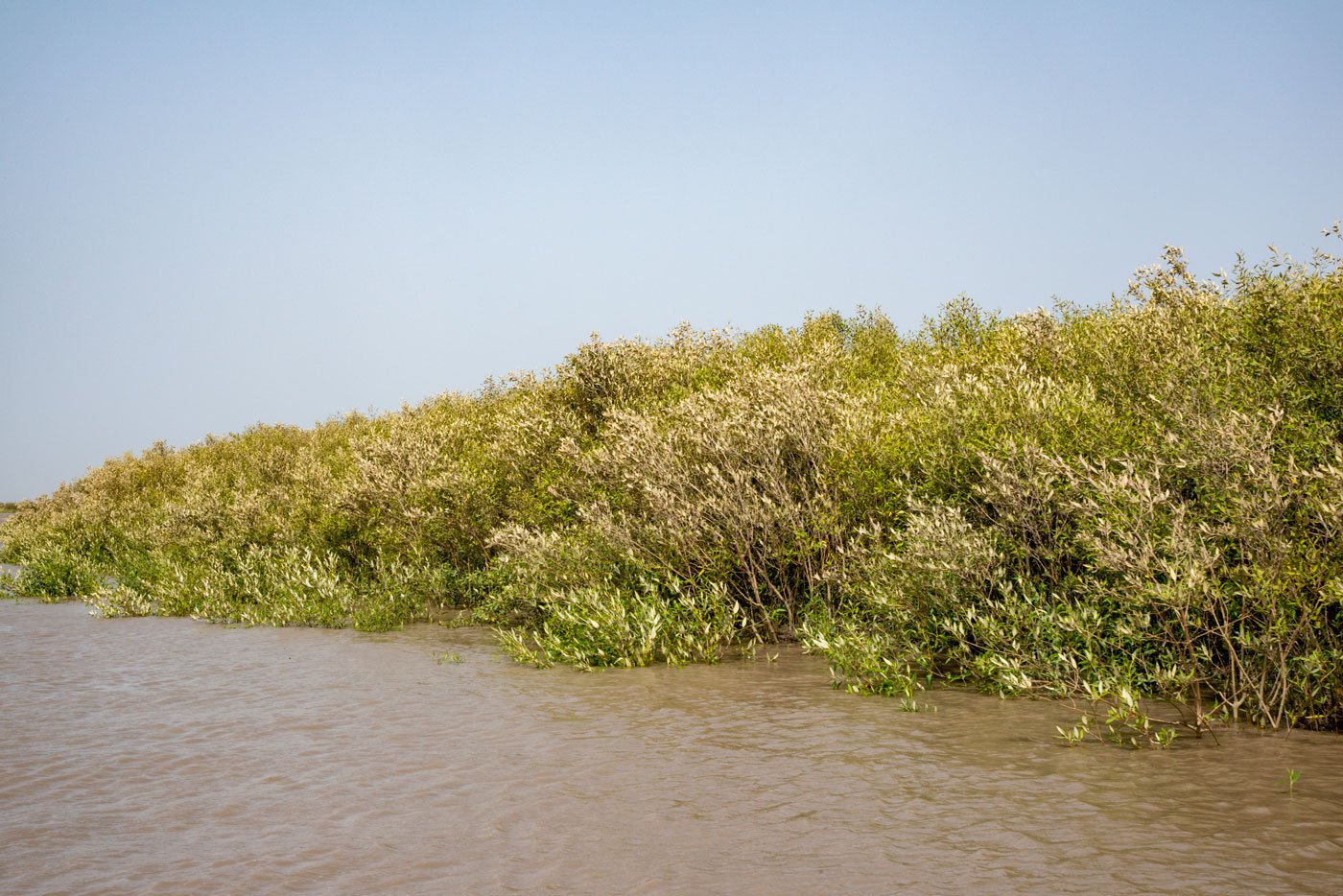 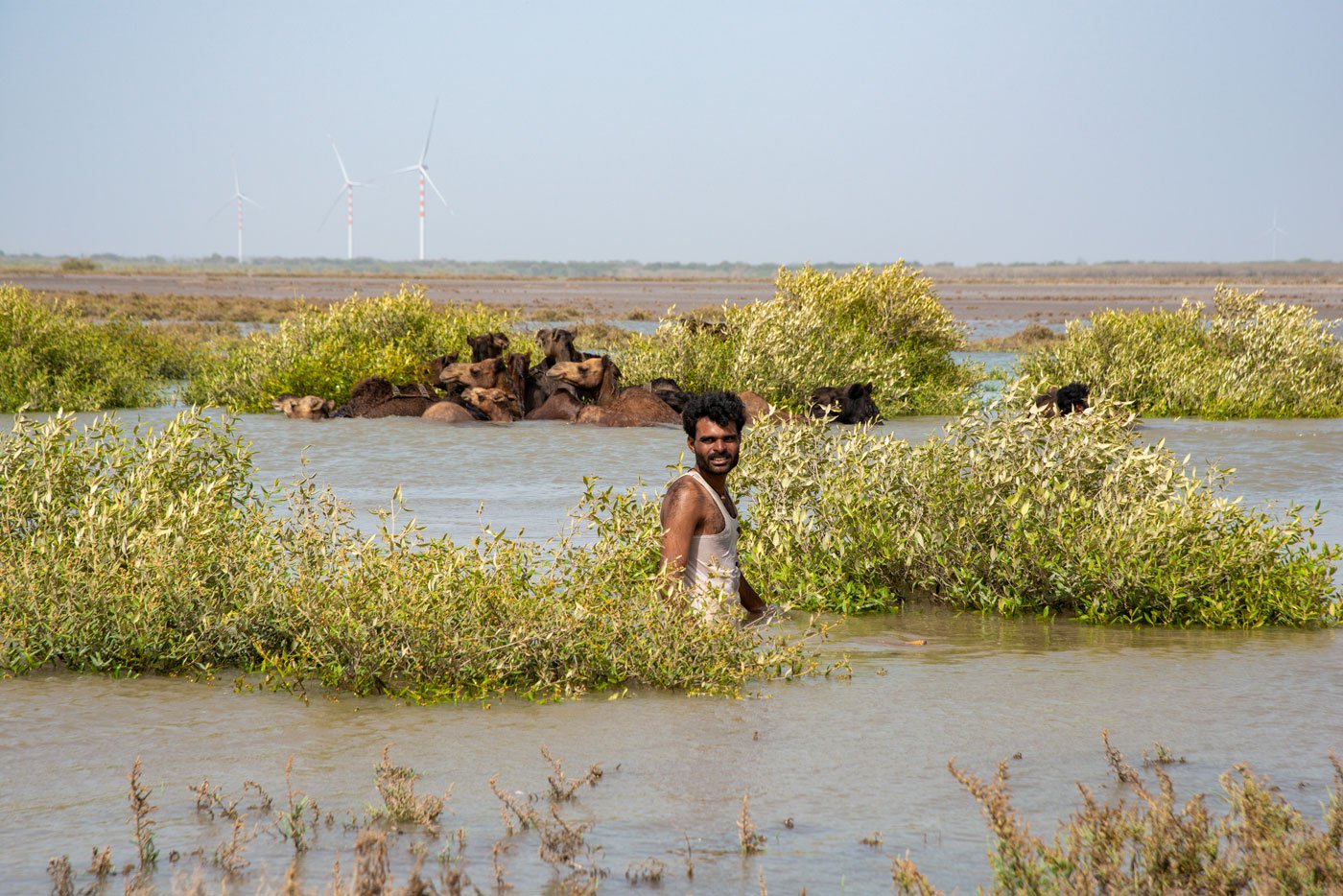 Bhikabhai Rabari accompanies his grazing camels by swimming alongside them 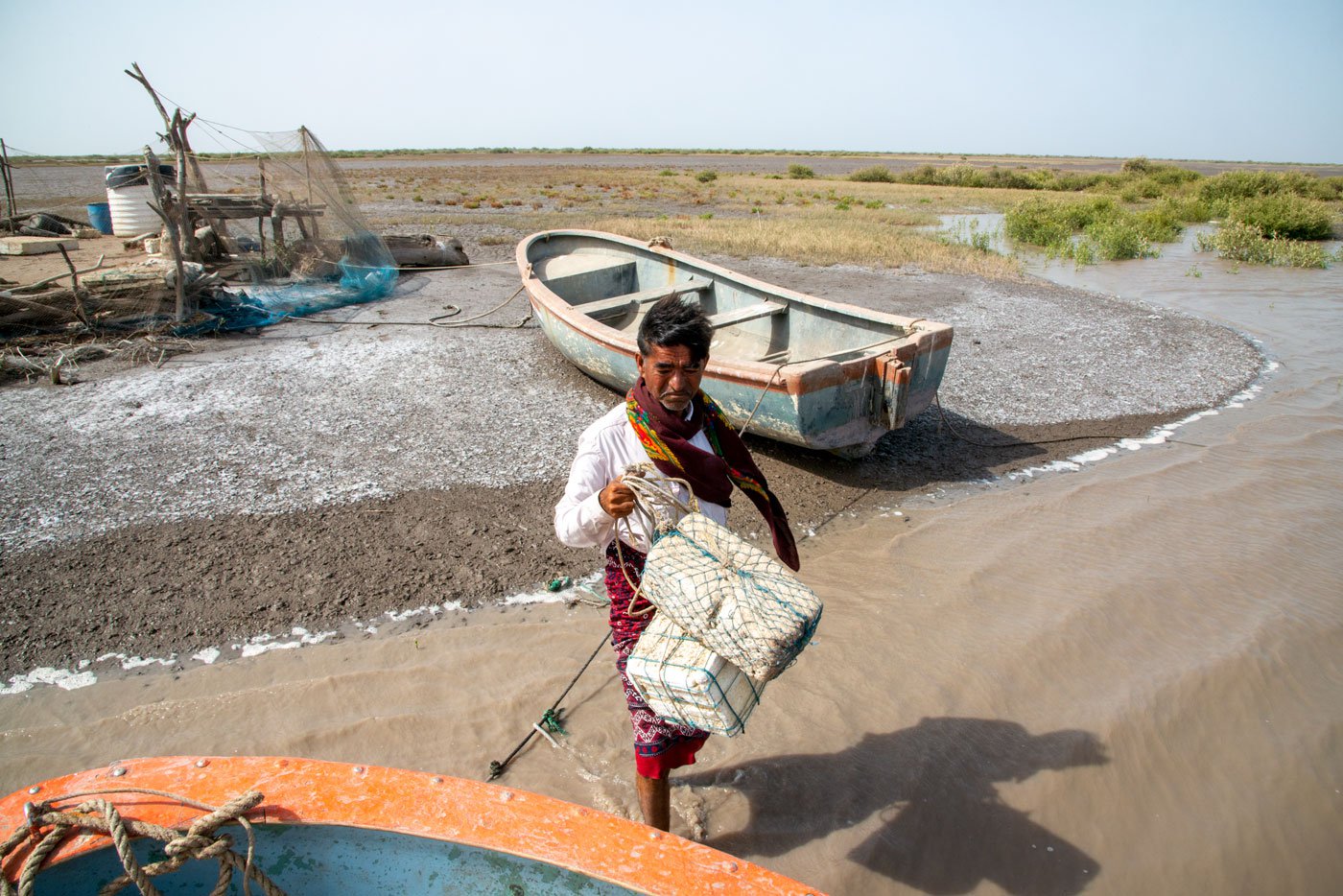 Aadam Jat holding his homemade polystyrene float, which helps him when swims with his animals 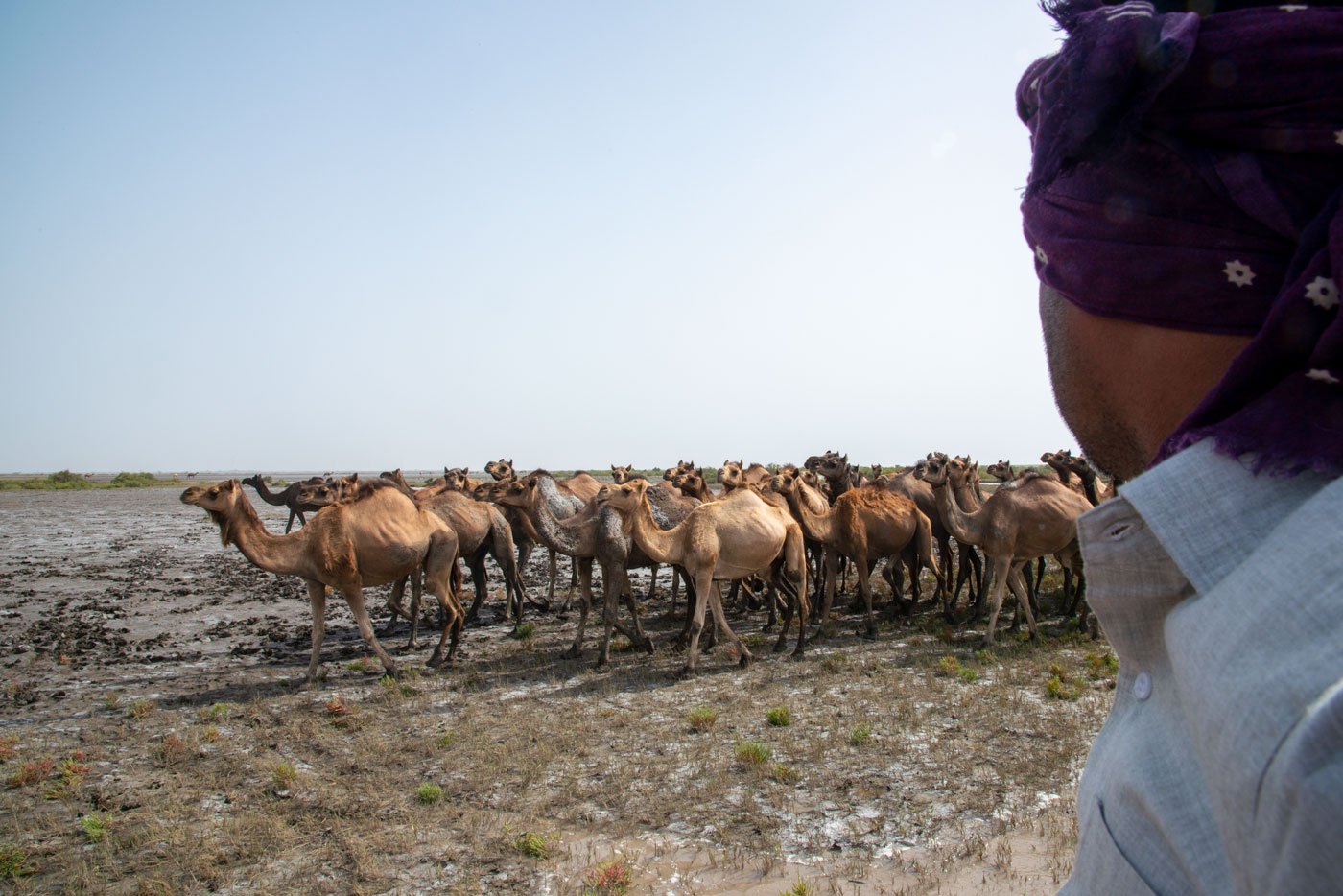 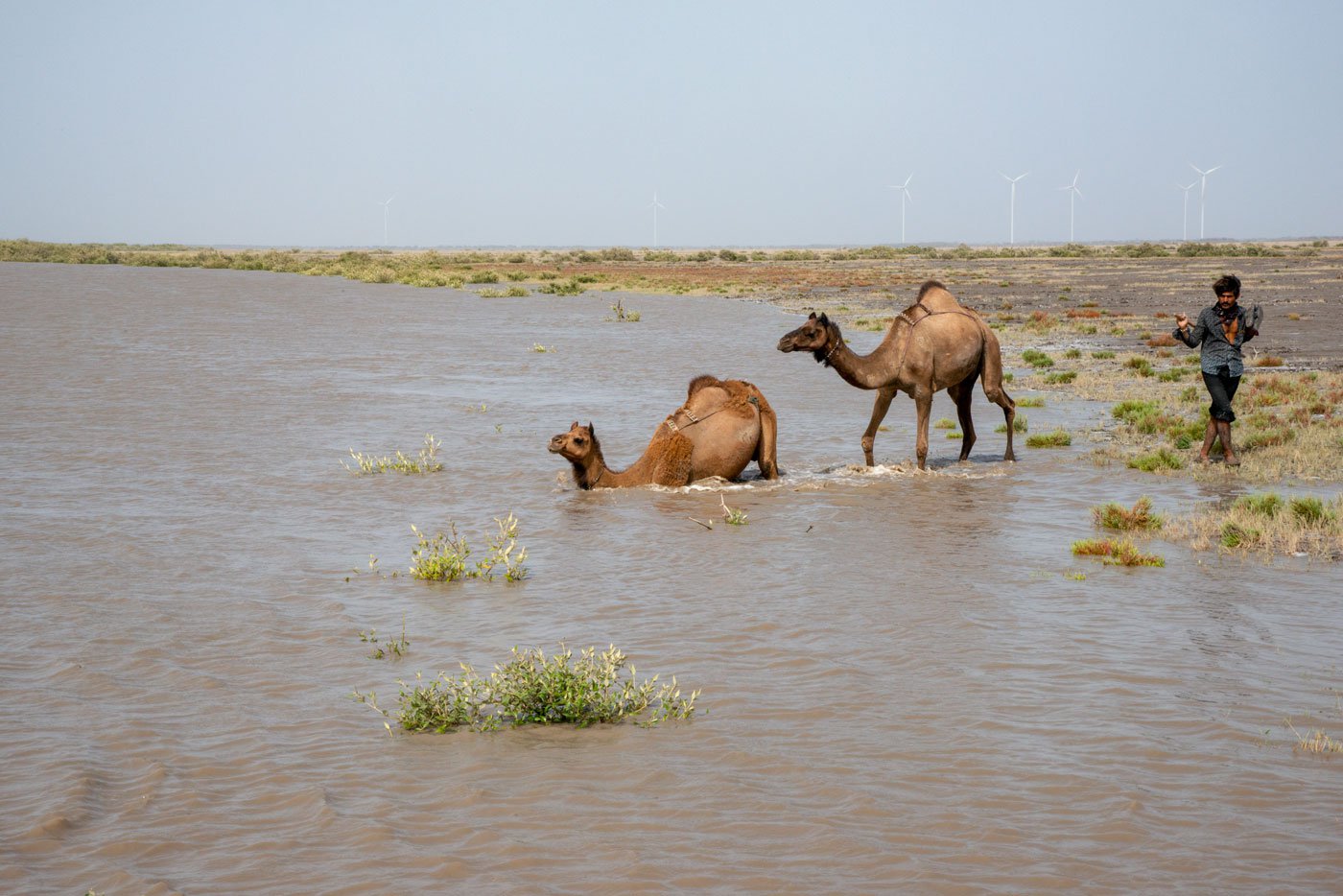 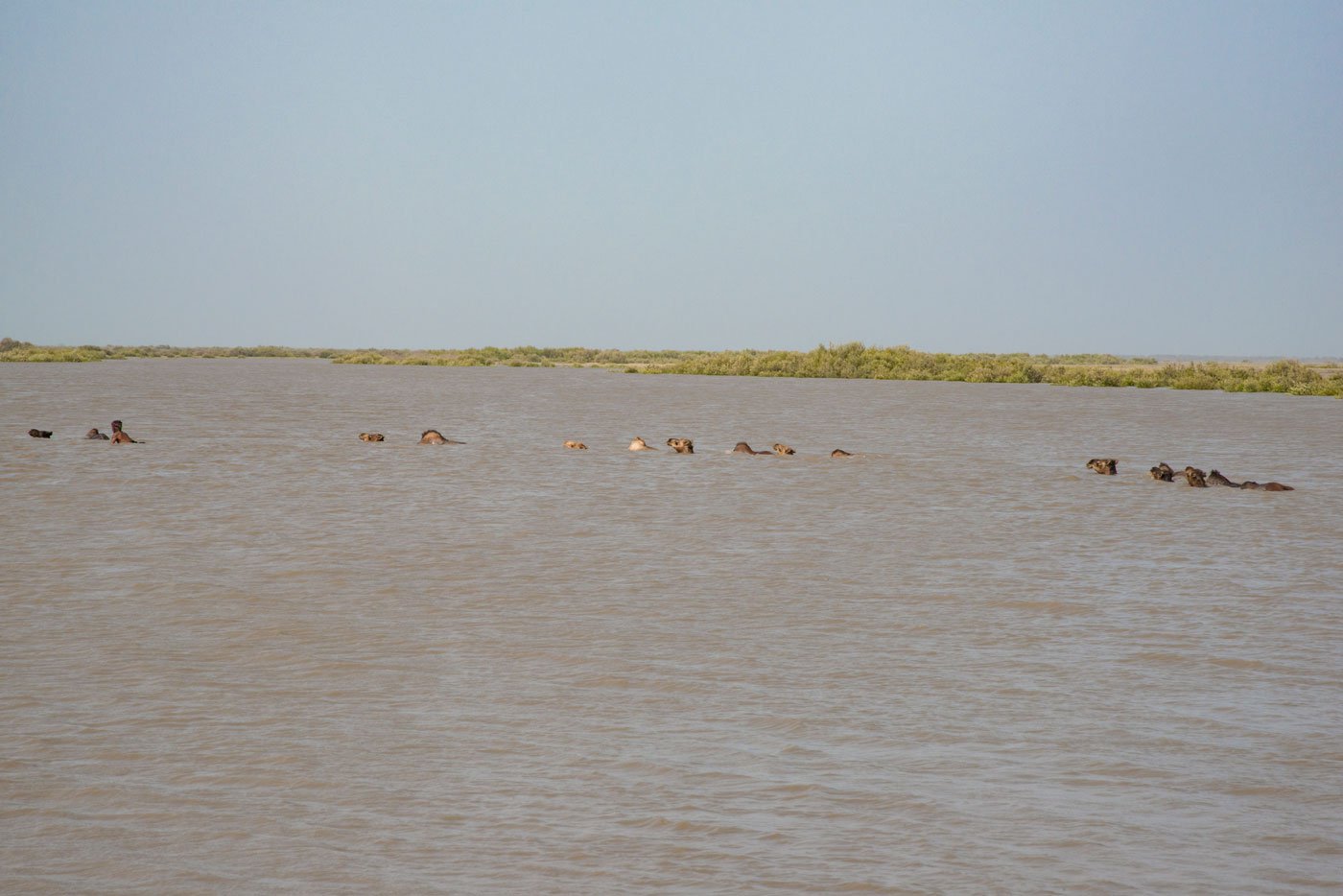 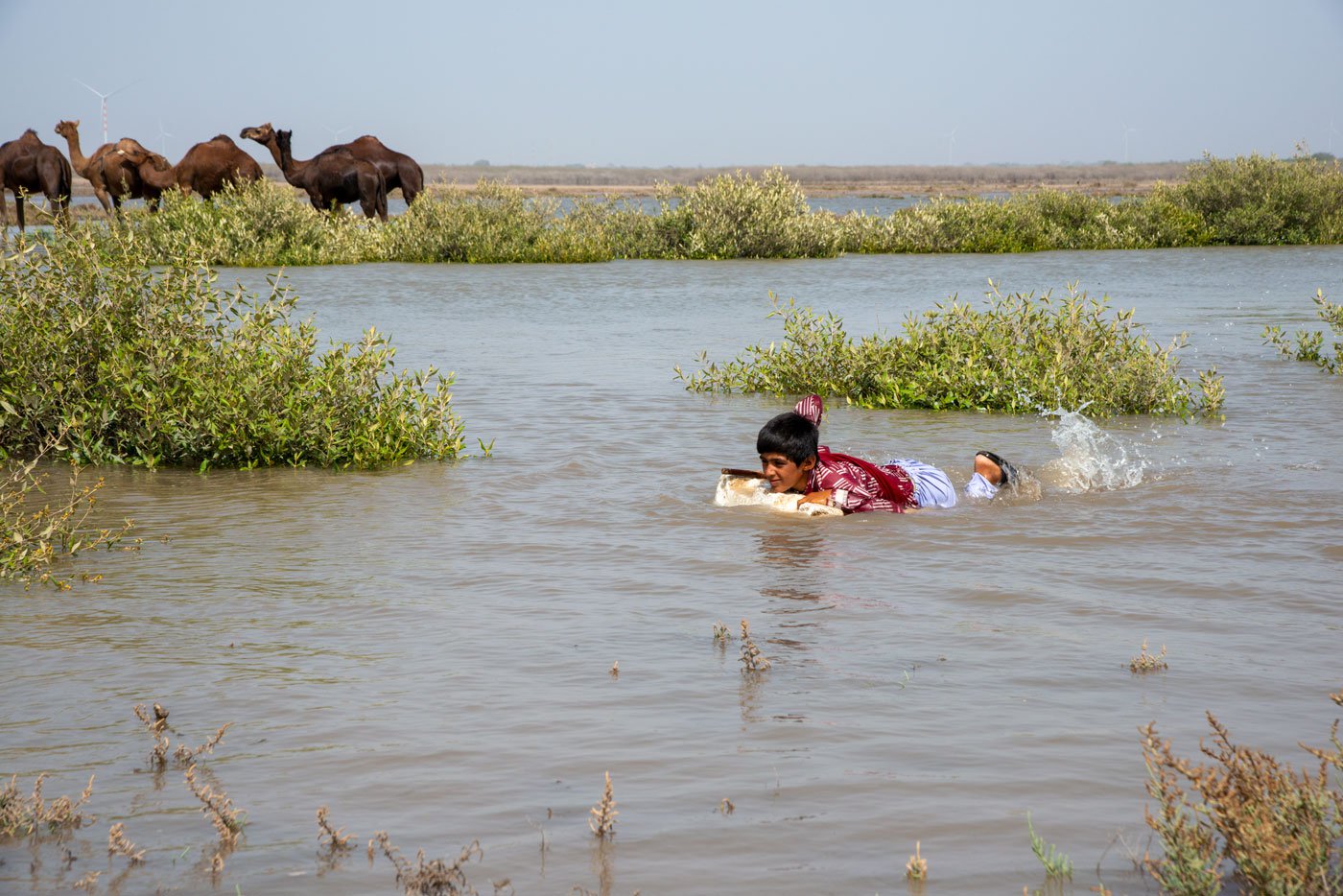 Hari, Jethabhai Rabari's son, swimming near his camels. ‘I love to swim with the camels. It’s so much fun!’ 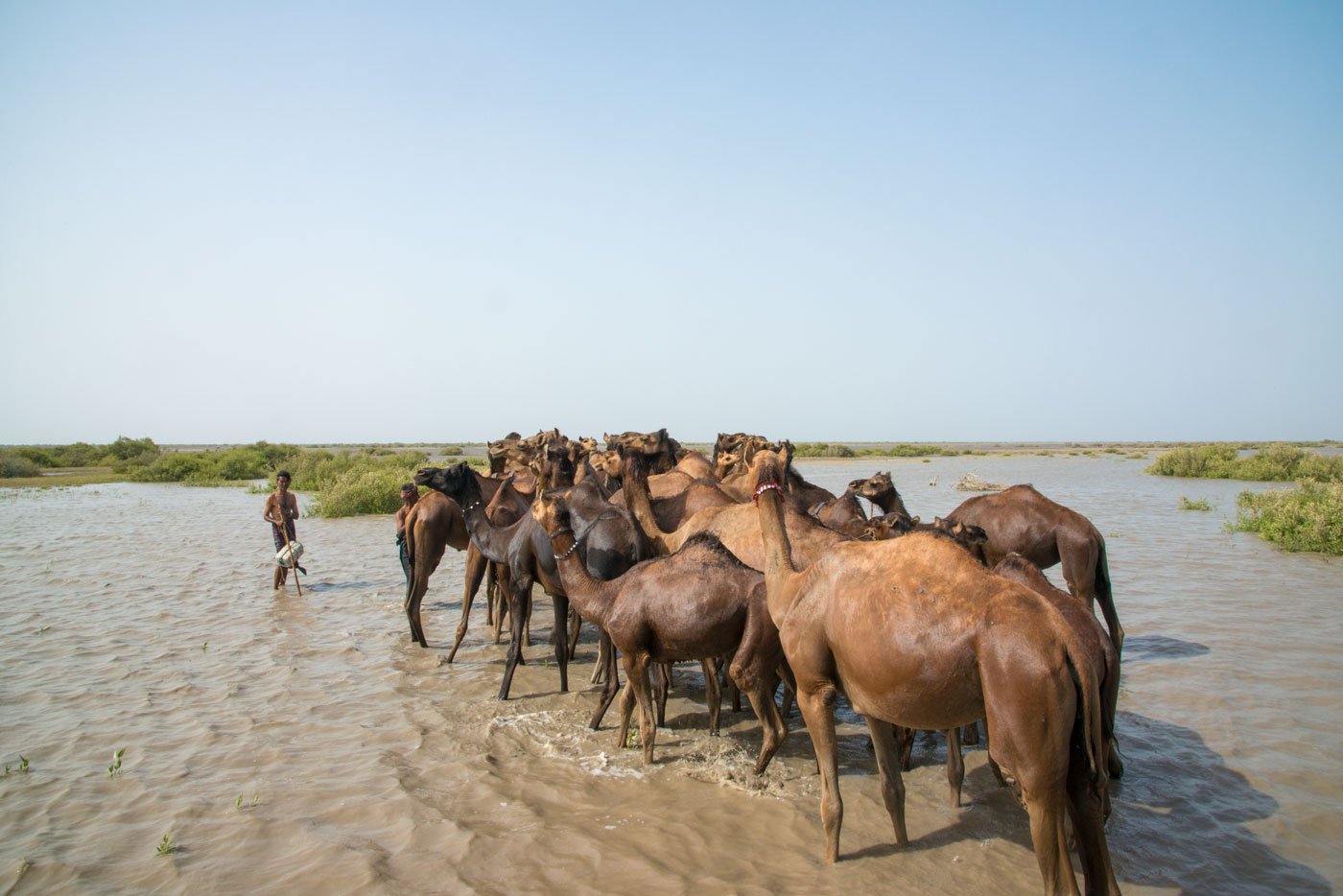 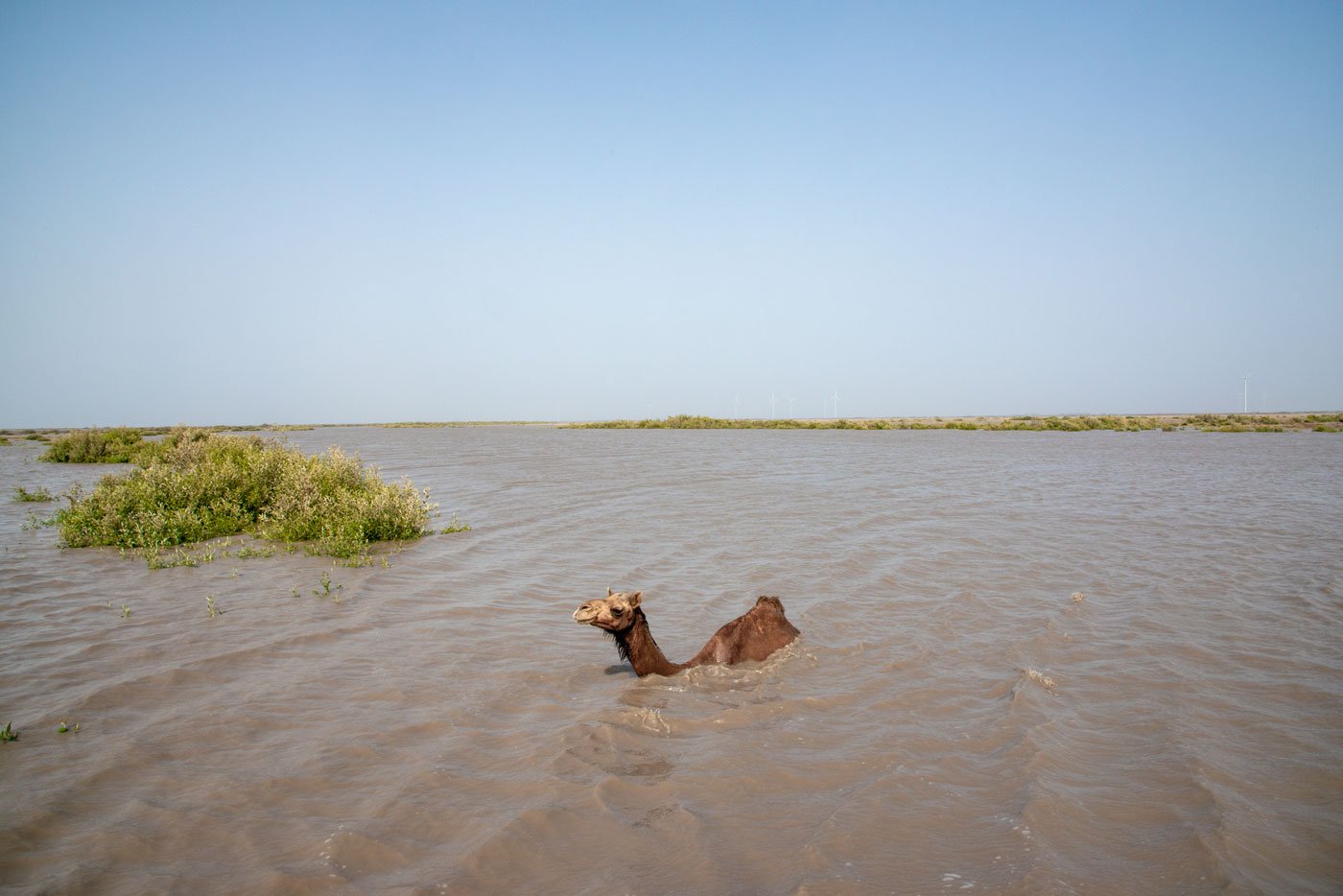 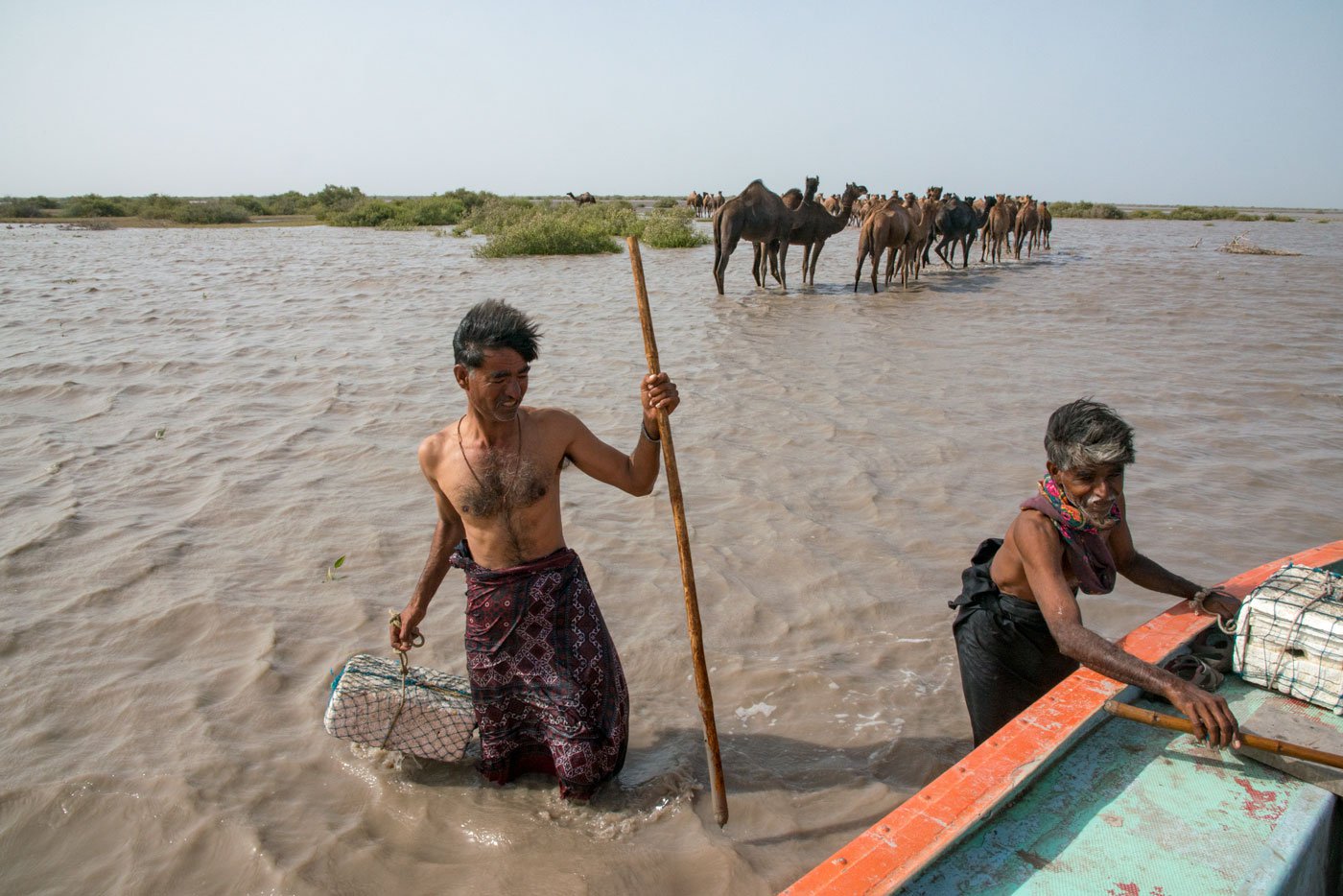 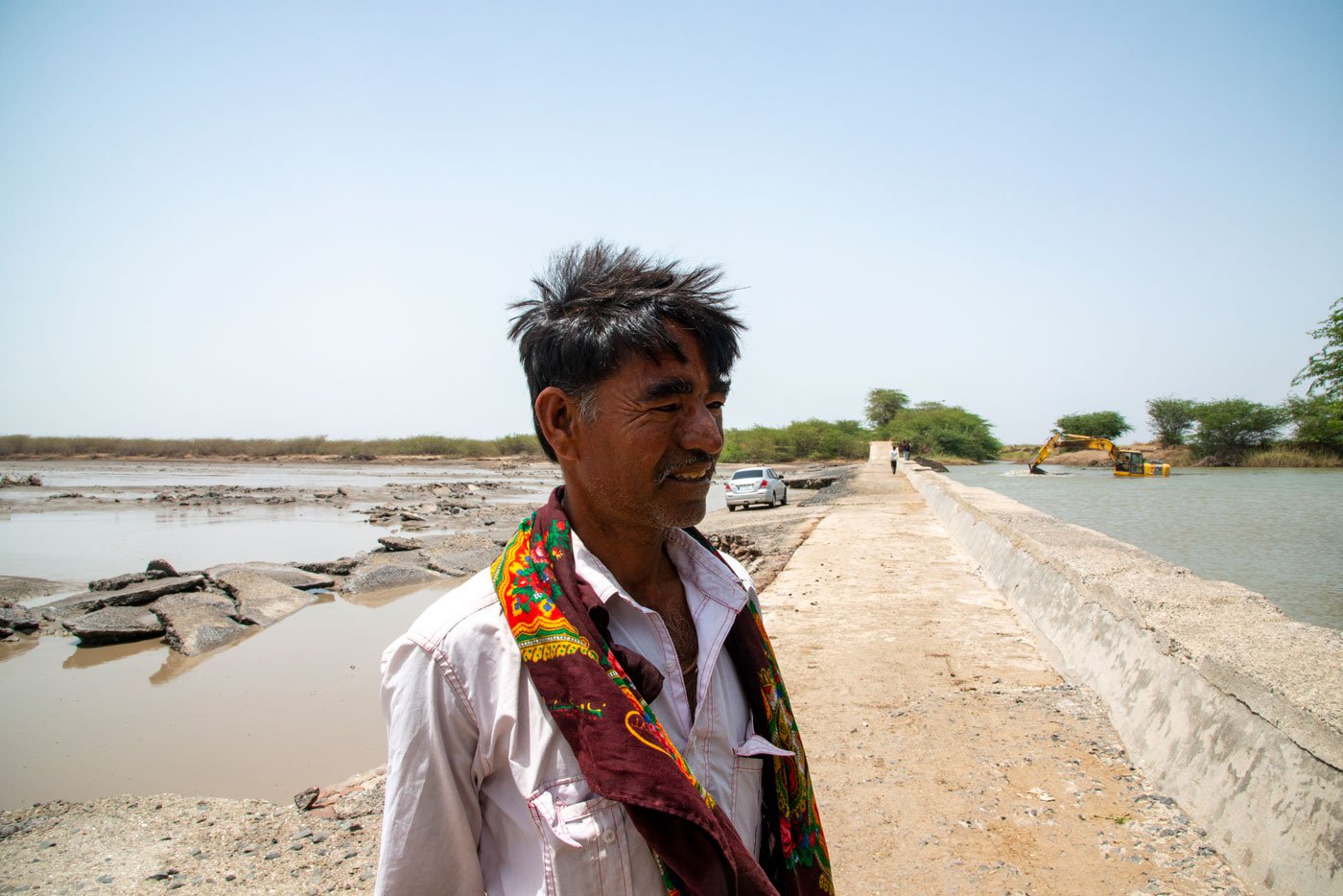 Aadam Jat, from the Fakirani Jat community, owns 70 Kharai camels and lives on the periphery of the Marine National Park in Jamnagar district 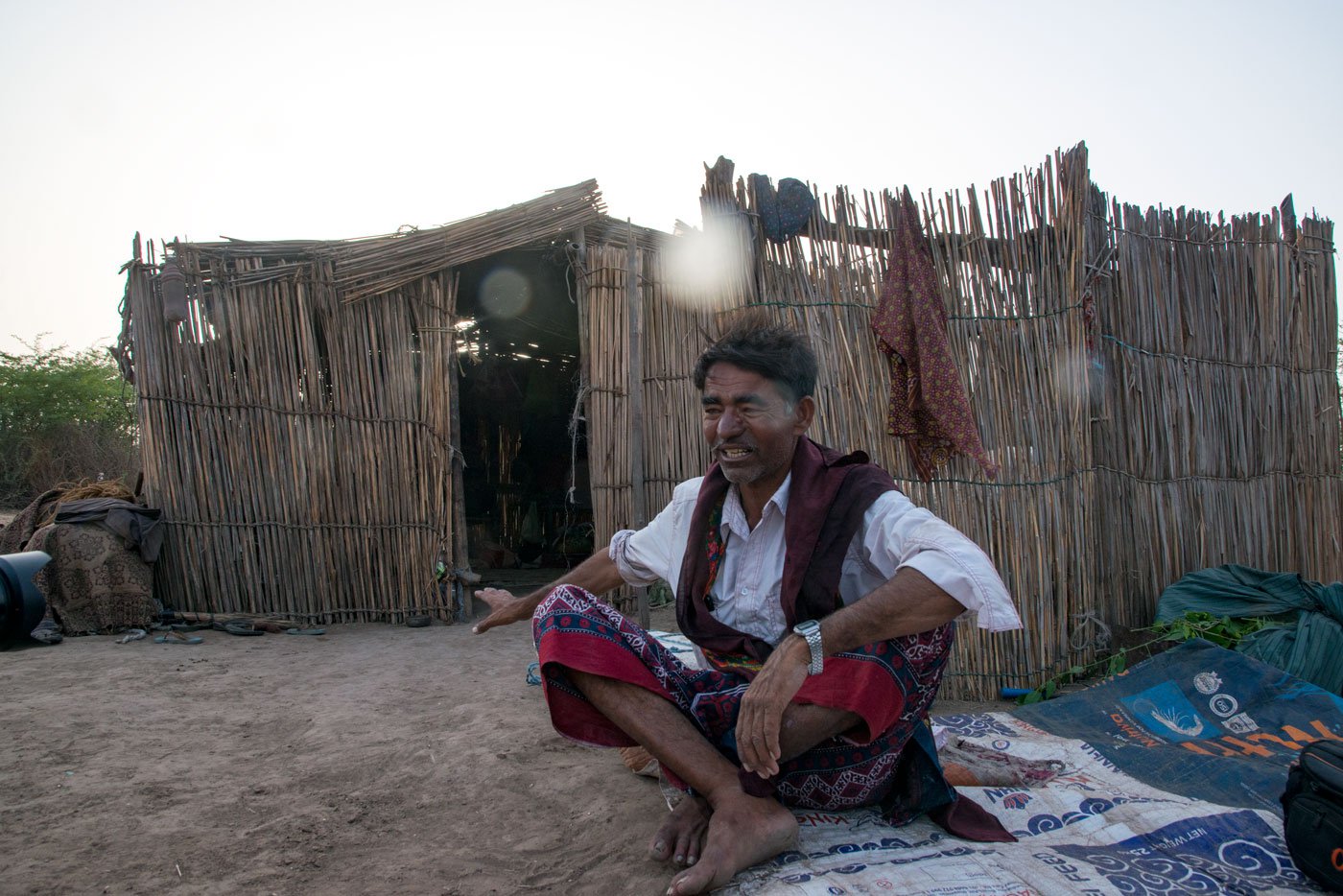 Aadam Jat in front of his house in Balambha village of Jodiya taluka. ‘ We have been here for generations. Why must we face harassment for camel grazing? ’ 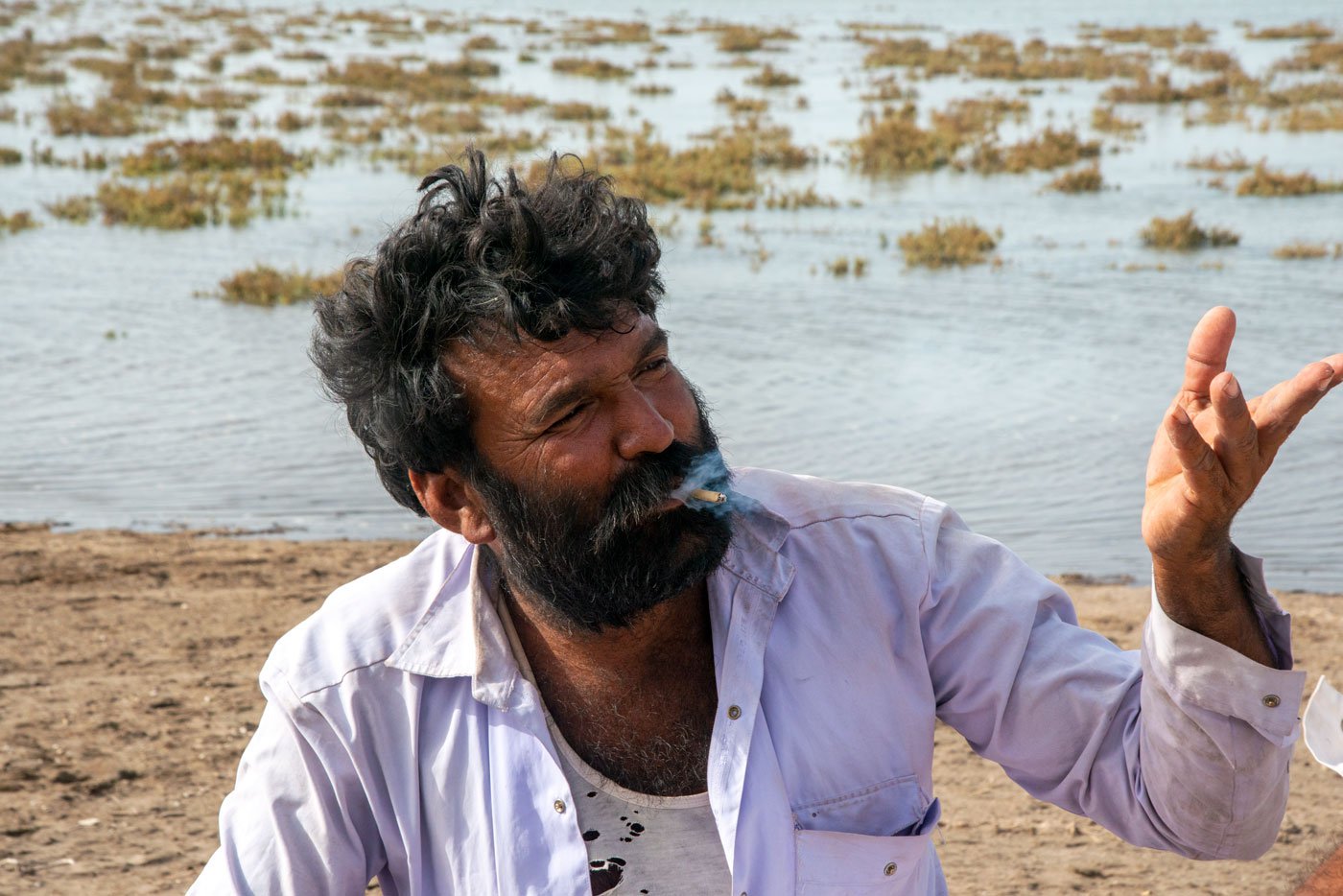 Jethabhai's family used to own 300 Kharai camels once. ‘Many died; I am left with only 40 now. This occupation is not sustainable anymore’ 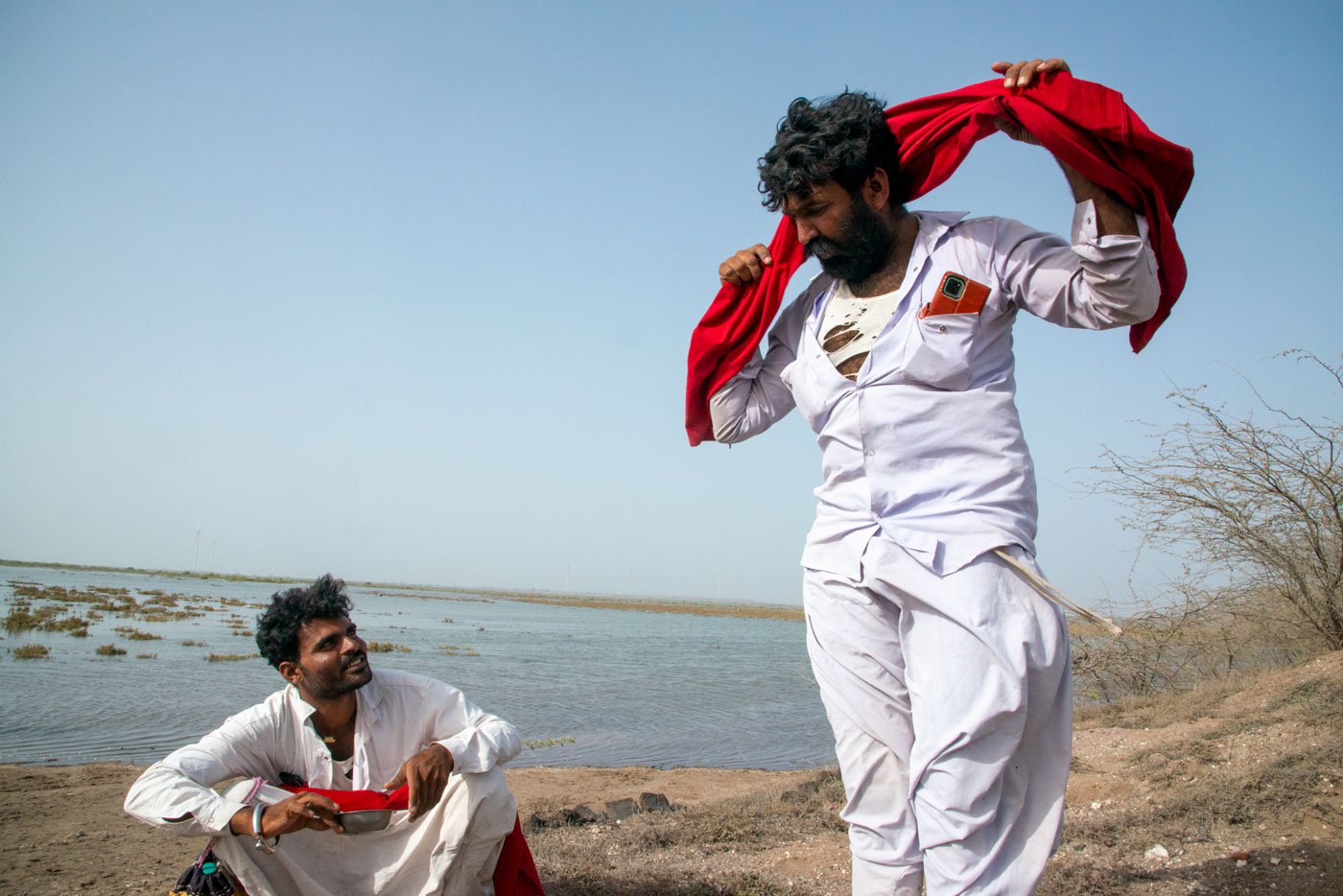 Dudabhai Rabari (left) and Jethabhai Rabari in conversation. ‘We both are in trouble because of the rules imposed by the Marine National Park. But we are trying to survive through it,’ says Duda Rabari 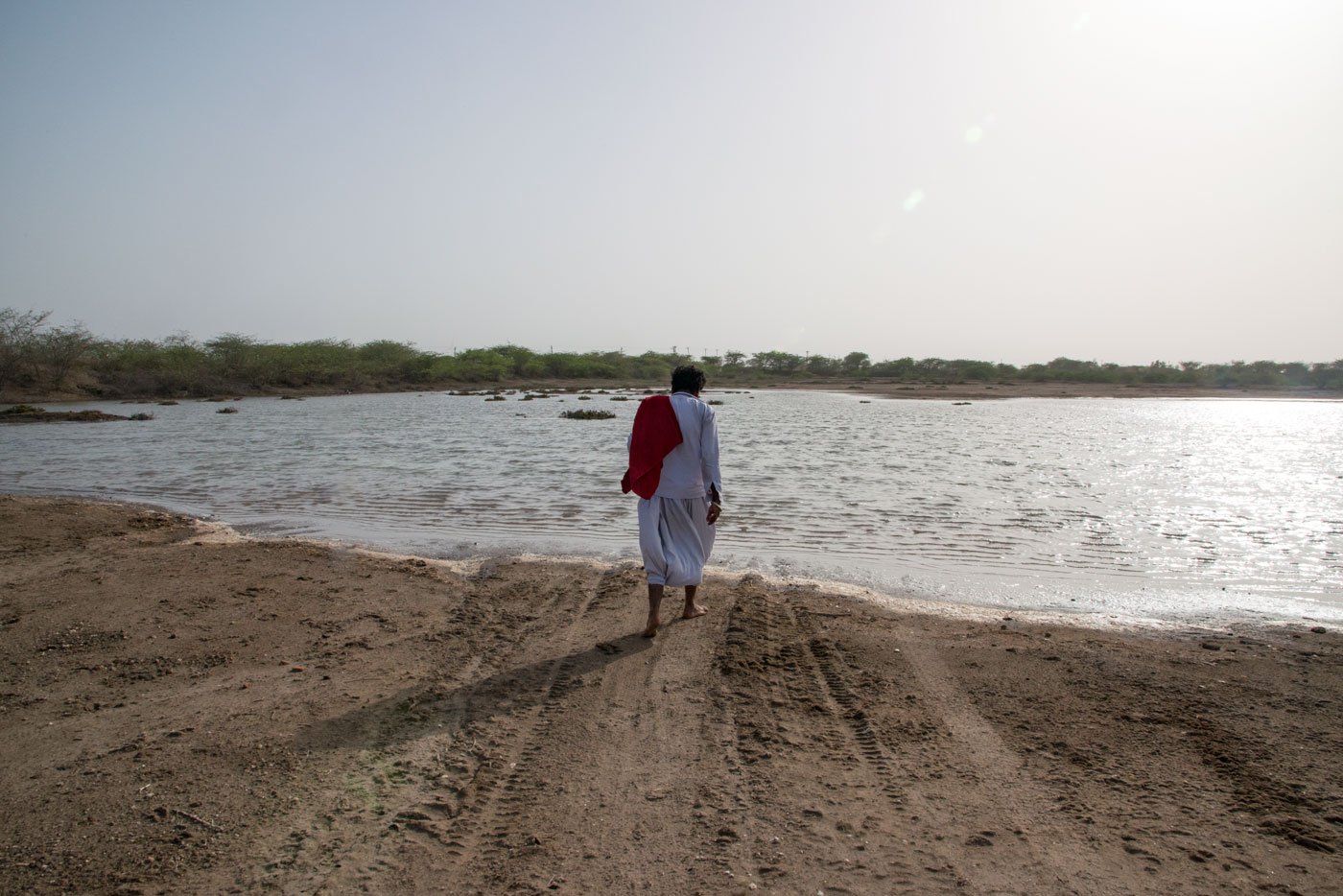 As the low tide settles in the Gulf of Kachchh, Jethabhai gets ready to head back home 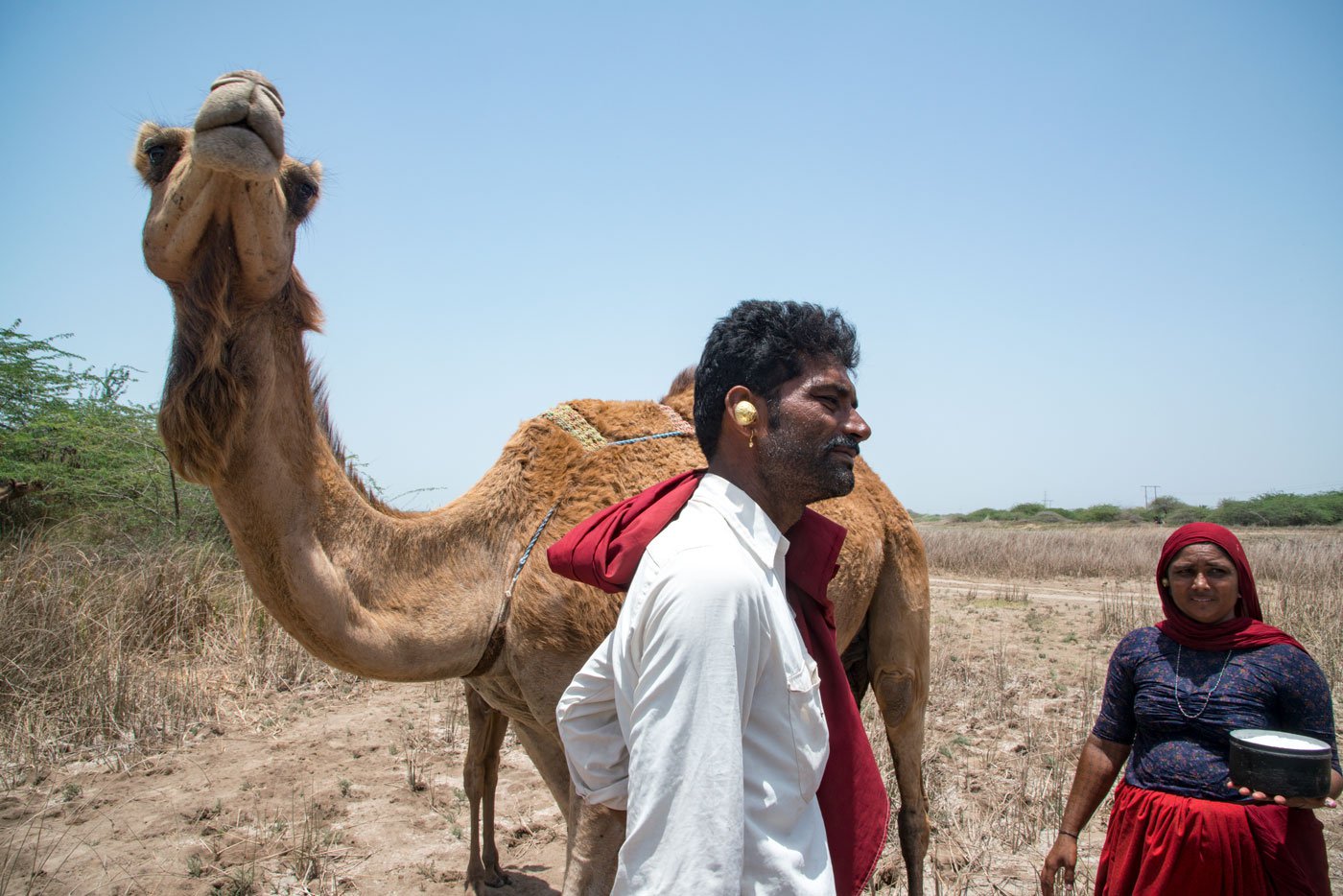 Jagabhai Rabari and his wife Jiviben Khambhala own 60 camels in Beh village of Khambaliya taluka, Devbhumi Dwarka district . ‘My livelihood depends on them. If they are happy and healthy, so am I,’ Jagabhai says 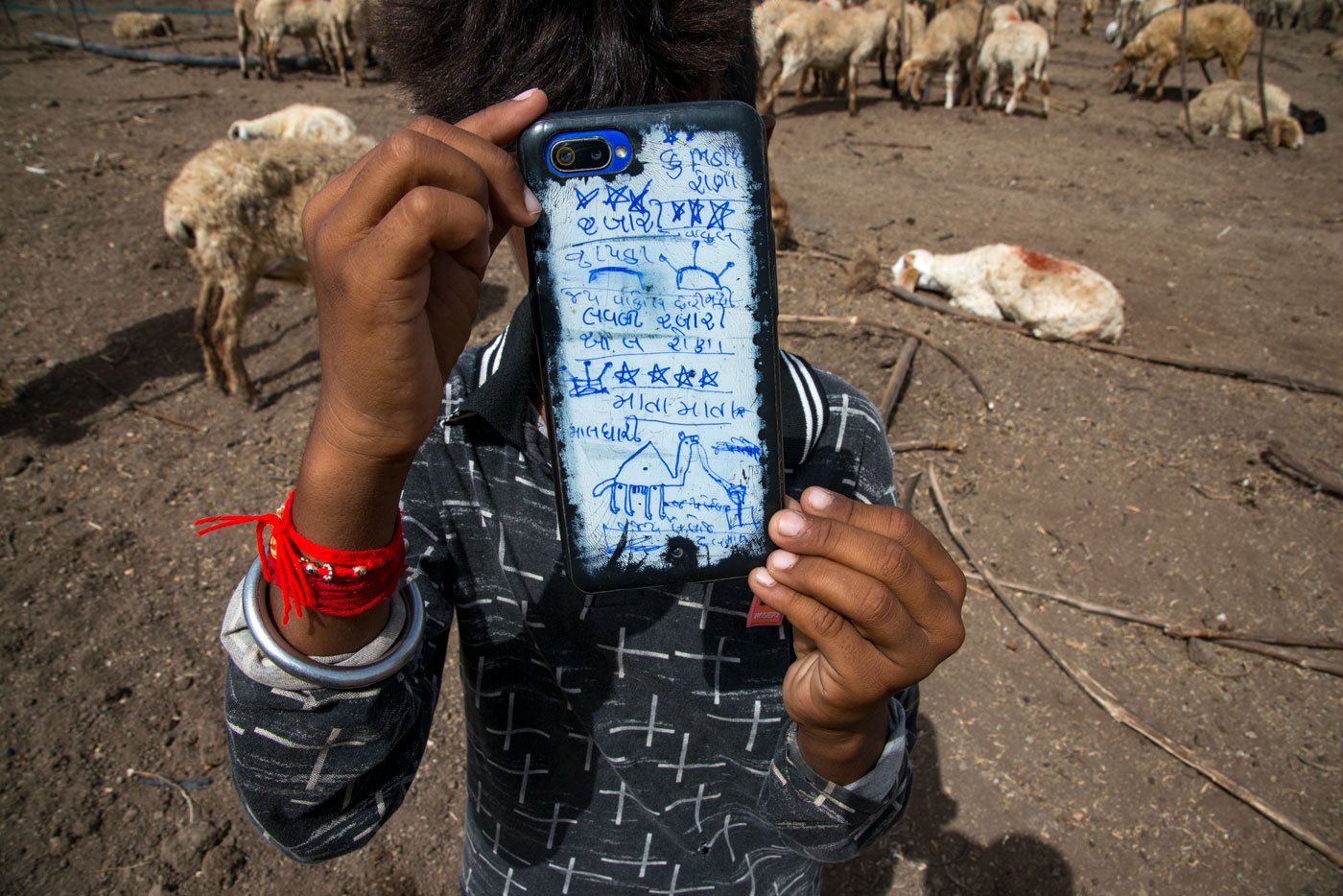 A maldhari child holds up a smartphone to take photos; the back is decorated with his doodles 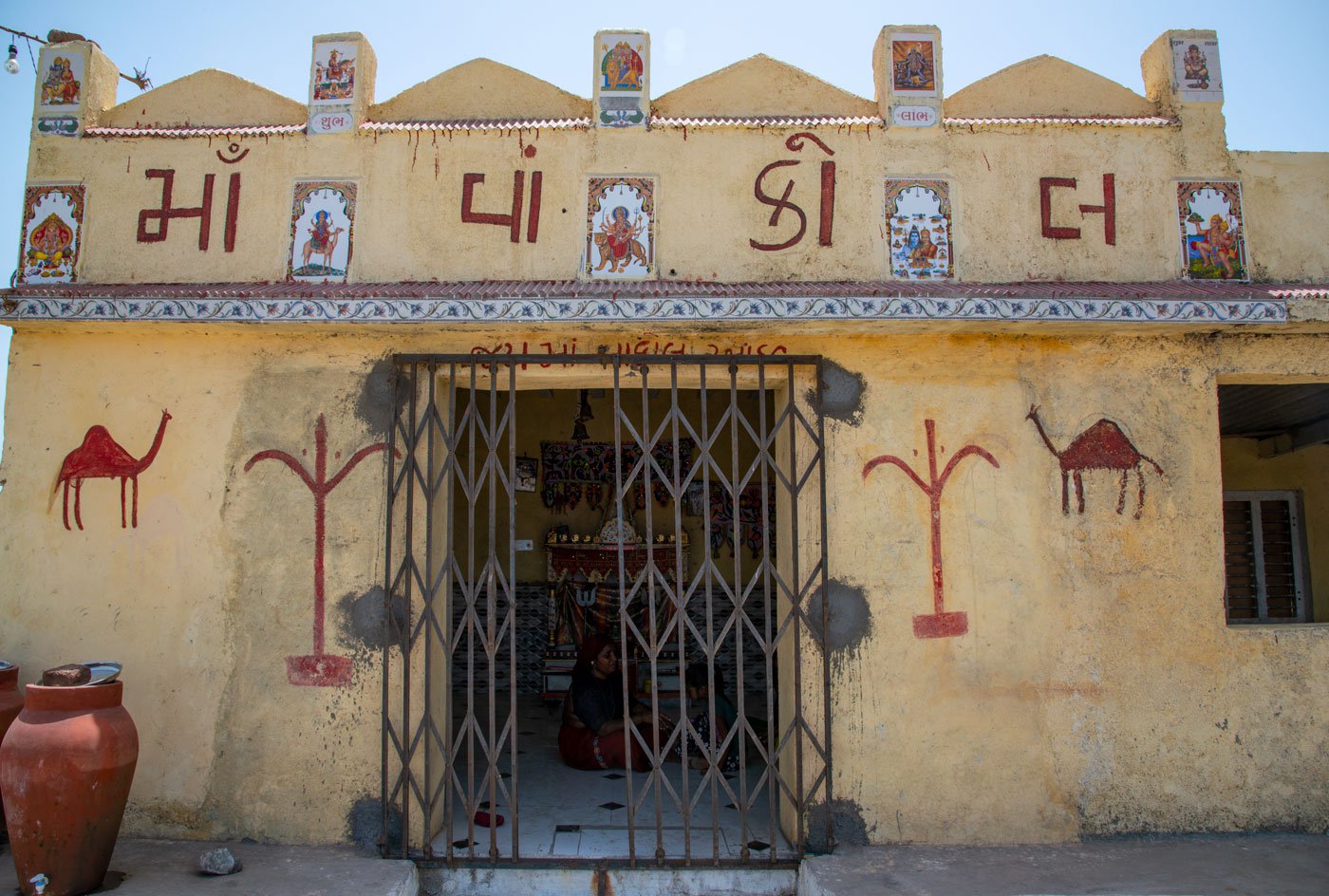 A temple in Beh village. The deity is worshipped by Bhopa Rabaris, who believe she looks after the camels and their herders 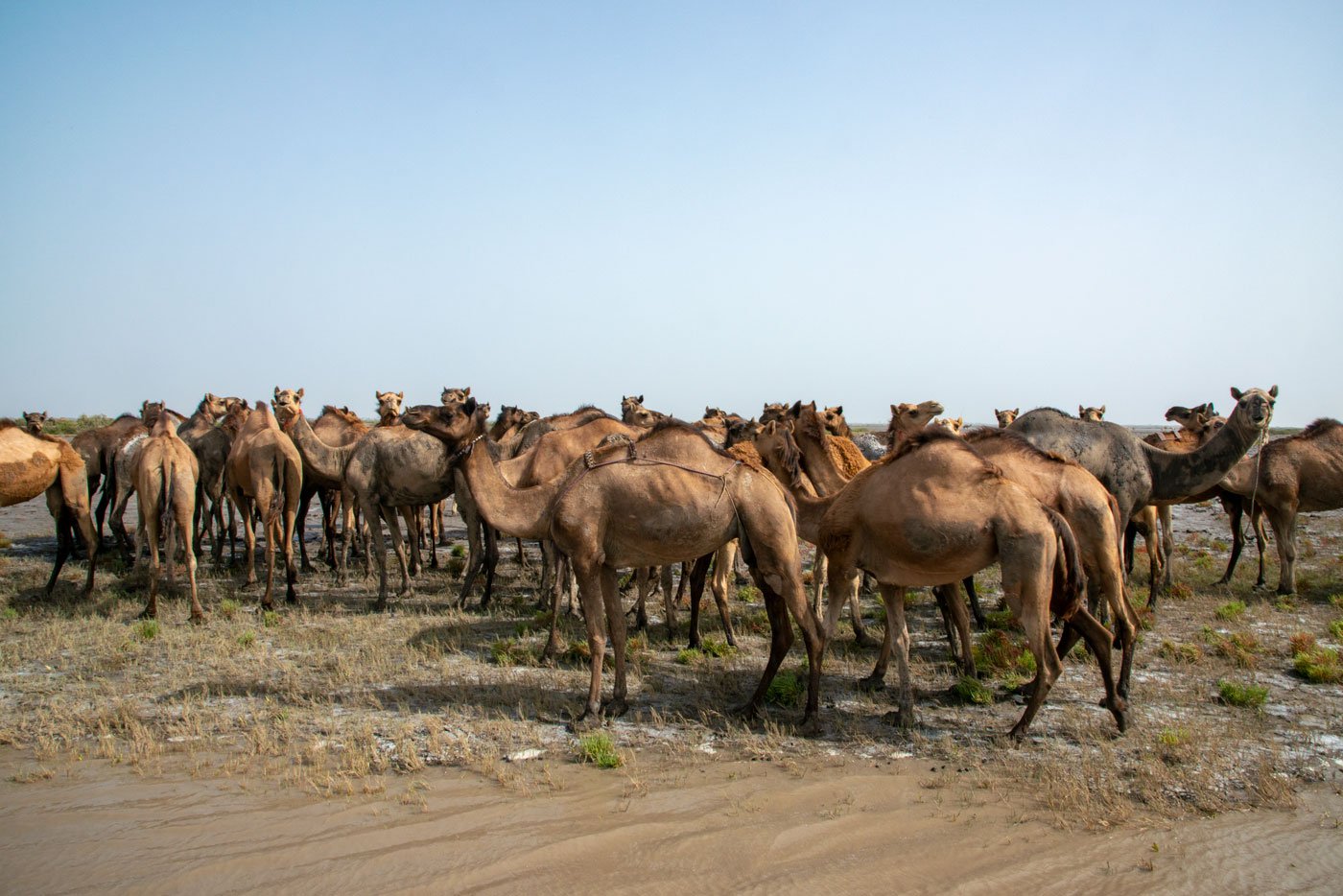 There are about 1,180 camels that graze within the Marine National Park and Sanctuary

The reporter would like to thank Mahendra Bhanani, former coordinator of Sahjeevan's camel programme, for his expertise and help during the reporting of this story.

Ritayan Mukherjee reports on pastoral and nomadic communities through an independent travel grant from the Centre for Pastoralism. The Centre has not exercised any editorial control over the contents of this reportage.

Other stories by Binaifer Bharucha