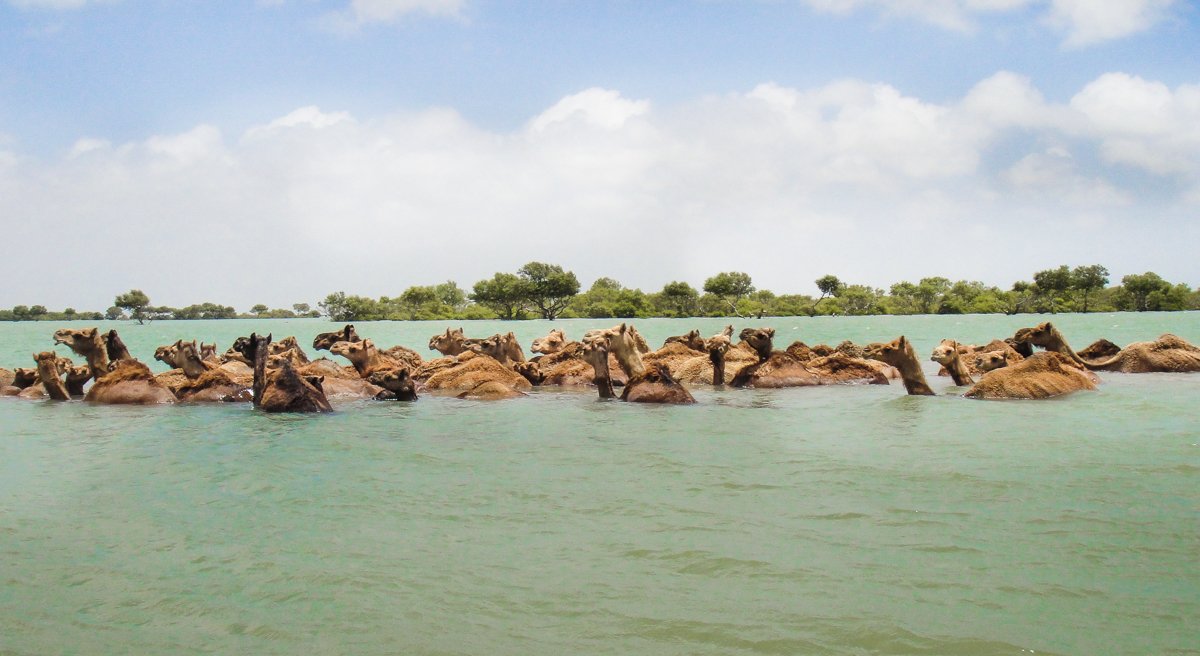 The swimming camels of Kachchh

The magnificent Kharai camels get vital elements of their diet from marine mangroves on islands – and get there by swimming – yes swimming! – several kilometres off the coast of Kachchh (or Kutch) in Gujarat

The camels – around 40 of them – had just swum back from an island in the ocean off Mohadi village in Abdasa taluka . They belonged to Ismail Jat, a herder from the Fakirani Jat community.

I could barely believe what I was seeing – camels who swim? But these were the magnificent Kharai camels – during the peak summer months from March-April till mid-July, they spend 3-4 days at a time on islands off the coast of Kachchh feeding on marine mangroves. Then the animals swim back – up to three kilometres each way – to the coastal villages to fill up on drinking water. And then they  return to the islands.

The camels are accompanied by herders from the unt maldhari or camel pastoralist communities of Gujarat. Two male maldharis usually form a team – either both swim along or one uses a small boat, ferrying rotis and drinking water, and comes back to the village. The other herder stays on the island with the camels, where he supplements his sparse meals with camel milk, an important part of the community’s diet.

Once the rains starts, the maldharis leave the camels on the islands. By around the middle of September, they bring the animals back and take them for grazing on rain-fed grasslands and shoreline mangroves. (See The endless search for grazing grounds )

I first saw the swimming camels in 2015; I went with a maldhari from Mohadi in a boat alongside the camels, but could not go all the way to the island without permission from the Border Security Force (BSF). The region is close to the border with Pakistan, and movement in and out of the ocean is closely monitored by BSF check posts. Meanwhile, the camels started disappearing over the horizon in the water.

Later, Ismail told me that ‘ kharai ’ means ‘salty’ in Gujarati. These camels are a special breed that has successfully adapted to ecotone zones or transitional areas of vegetation – here, coastal mangroves and grasslands. Their diet includes various plants, shrubs and mangroves. But if they don’t eat mangroves for long, these sturdy animals get sick and can eventually waste away.

In Kachchh, two pastoralist communities keep Kharai camels – the Rabaris and Fakirani Jats, while the Sama community keeps camels too, but not Kharai. There are around 5,000 Kharai camels in Gujarat, notes the Kachchh Unt Uccherak Maldhari Sanghatan (Kachchh Camel Breeders Association).

Of these, around 2,000 Kharai camels live in Kachchh district, which has a massive network of islands and mangroves. But these once-thriving forests have been fast disappearing,  giving way to salt pans for big manufacturers, or to industries. Large grazing tracts have also been cordoned off as protected areas by the government, or taken over by the invasive gando baavar ( prosopis julifora ) plant species.

On a visit to Bhachau taluka , around 85 kilometres from the district capital Bhuj in July 2018, within a few kilometres from the highway, I saw an endless expanse of salt beds, far more than during previous visits. Then in the Amaliyara area of the taluka , I met Mubarak Jat and his family on a small tapu (island) surrounded by mud. The mangrove pastures had almost run out for their highly valued 30 Kharai camels. “We don’t know where we will move to next,” he said. “There is no green left here. We are changing locations frequently to survive, but how long? The salt pans are everywhere.”

Earlier this year, the Kachchh Camel Breeders Association appealed to the National Green Tribunal (NGT) against the widespread salt pan leases given by the Deendayal Port Trust. In March 2018, the NGT passed an interim order stopping salt pan activity on leased land between Kandla and Surajbari. And mandated an inspection by the Gujarat State Pollution Control Board, the Central Pollution Control Board, the Gujarat Coastal Zone Management Authority (GCZMA), and other administrators. The inspection’s report was submitted in April. The case is in process.

Later in my visit in July, I spent a few days in Lakhpat taluka , around 210 kilometres from Bhachau, home to several Fakirani Jat families. But many in this community are no longer nomadic. They say this is because of the absence of grazing grounds for their Kharai camels. Karim Jat of Mori village says, “I don’t want to give up our traditional life. But I had to. The rain is scarce here. The mangroves are depleting or have become protected areas where we cannot graze our animals. What should we do? These camels are like my family members. Seeing their suffering breaks my heart.” 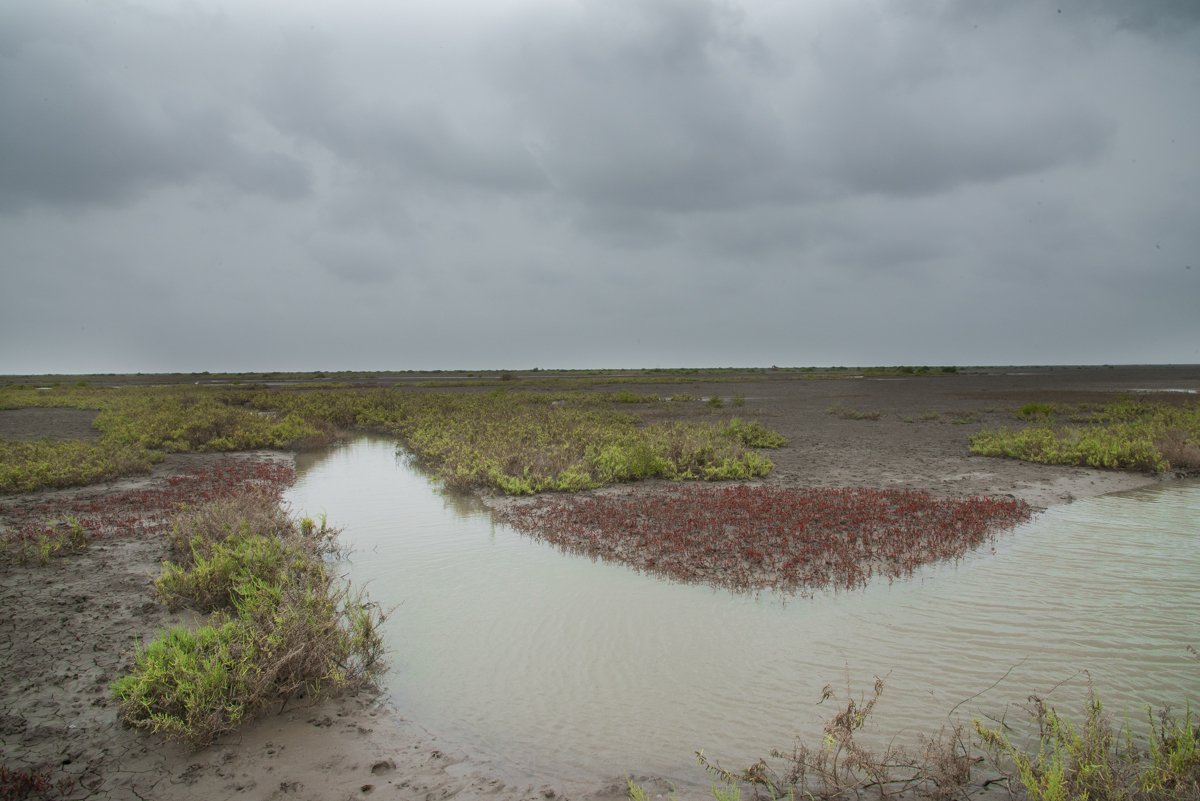 For centuries the vast tracts of mangroves in Kachchh district of Gujarat have been crucial to the region’s ecology, and a major source of food for the Kharai camels 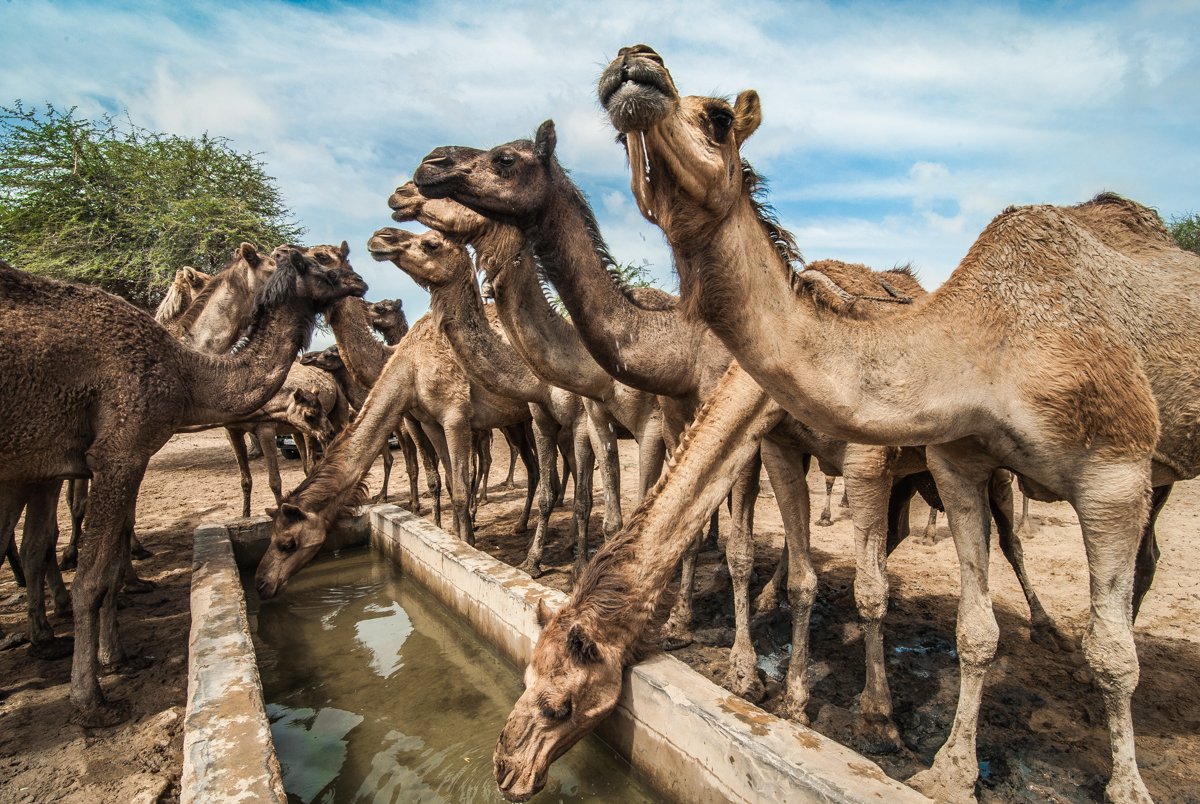 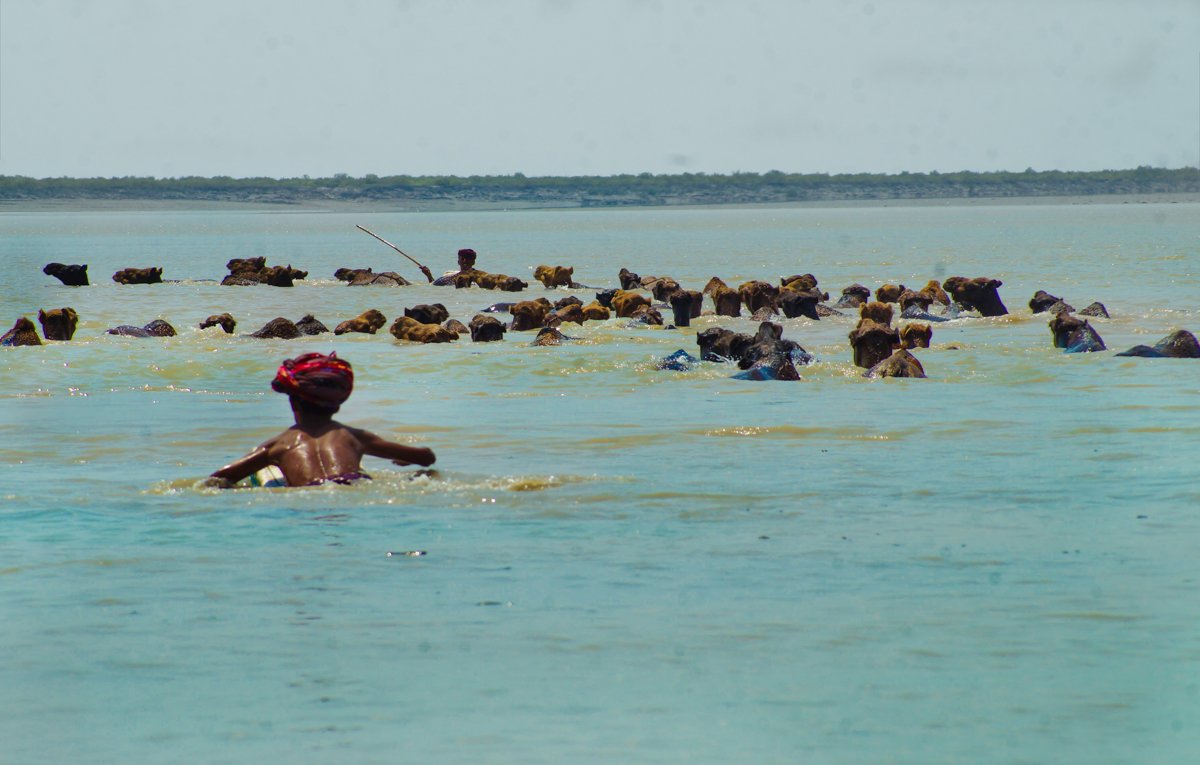 Kharai camels swimming through the Gulf of Kachchh in Lakhpat taluka to reach the nearest tapu (island) in search of mangroves. They can swim up to 10 kilometres in the open seas. Herders from the pastoral maldhari communities accompany them during these swims and island sojurns 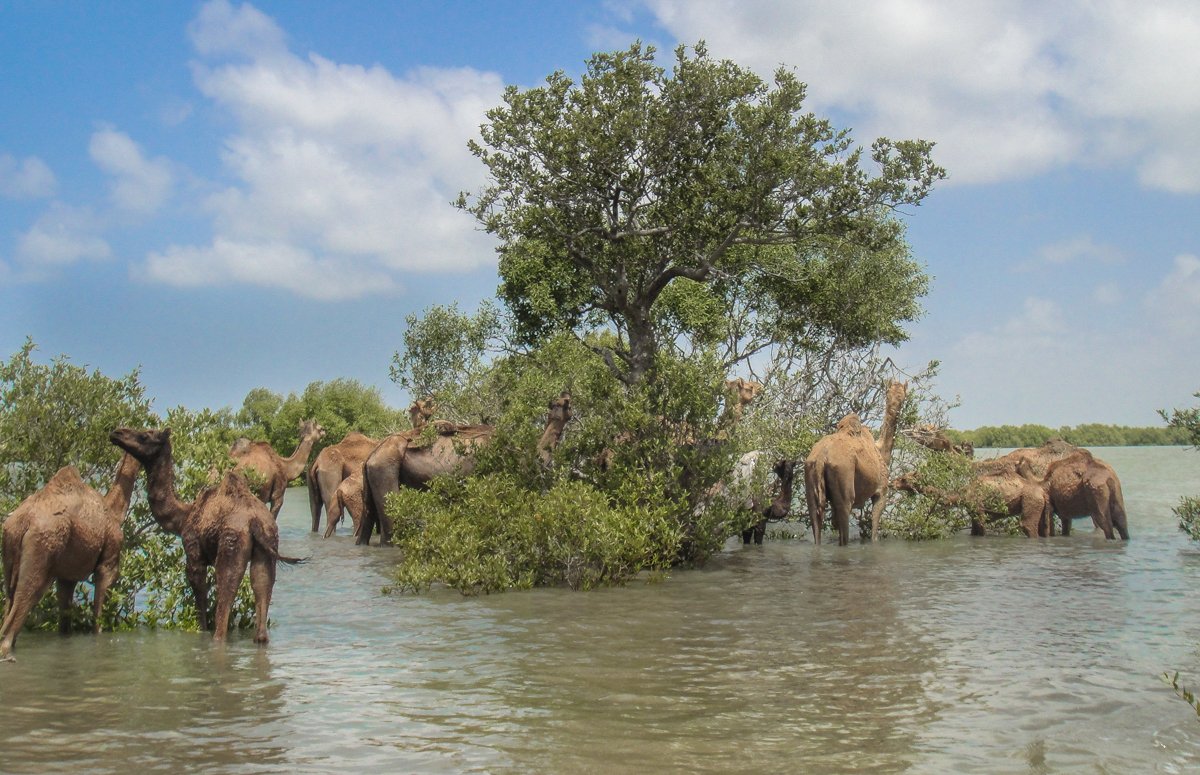 Kharai camels feeding on mangroves on an island near Jangi creek, Bhachau taluka . Their grazing is also a pollinating process that helps to regenerate the mangrove forests 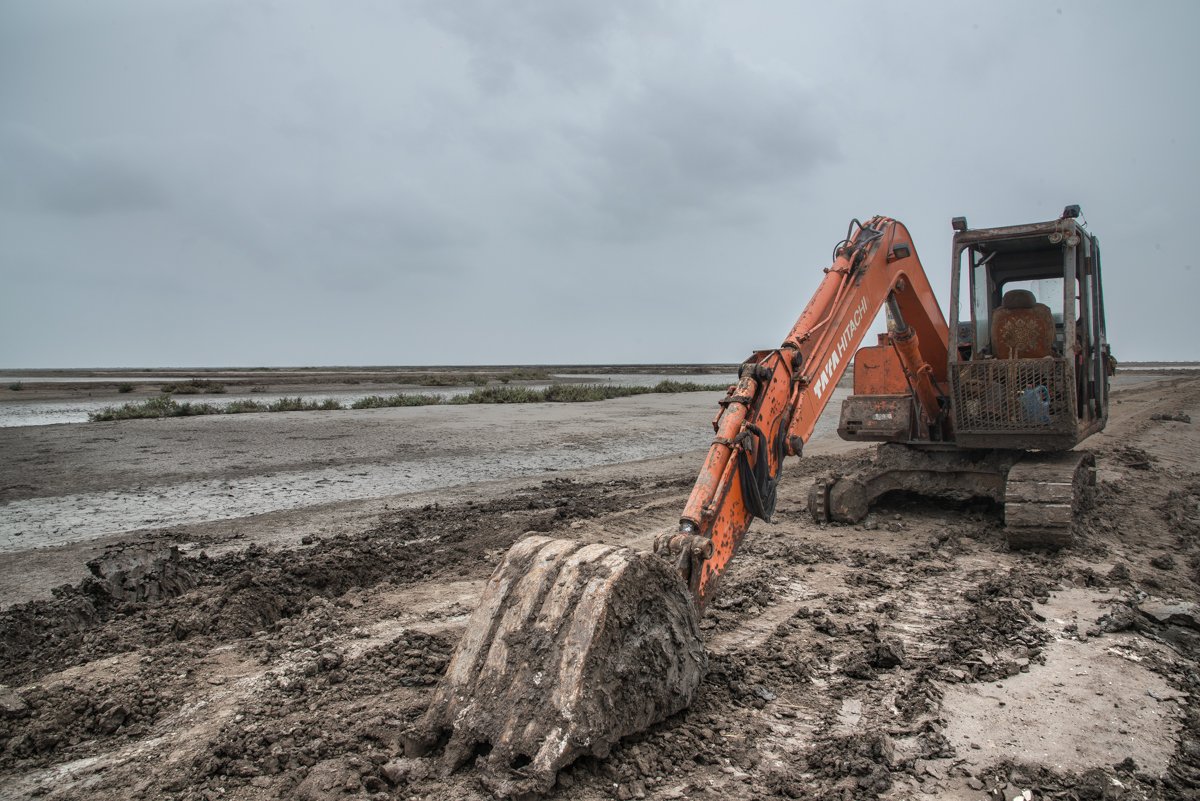 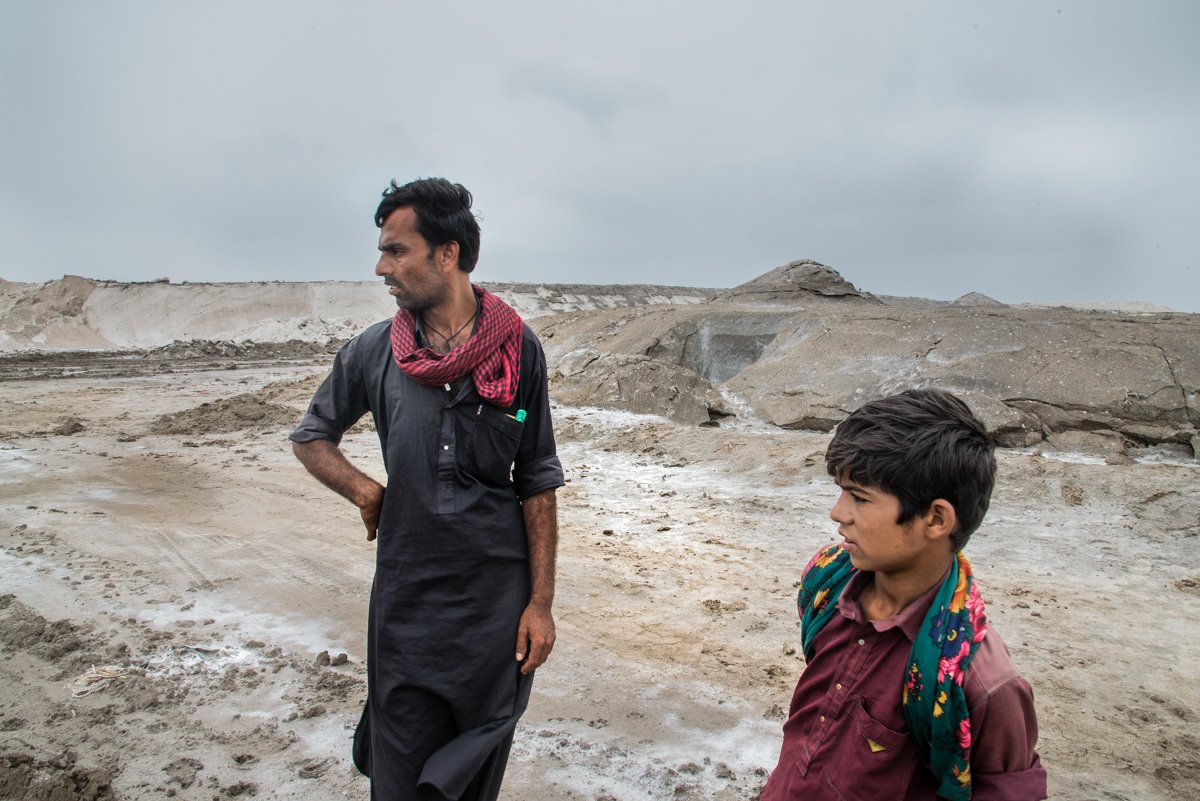 Mubarak Jat says there is almost no grazing ground left for his herd. He is staying with his Kharai camels on a small island amid salt pans near Chirai Moti village in Bhachau 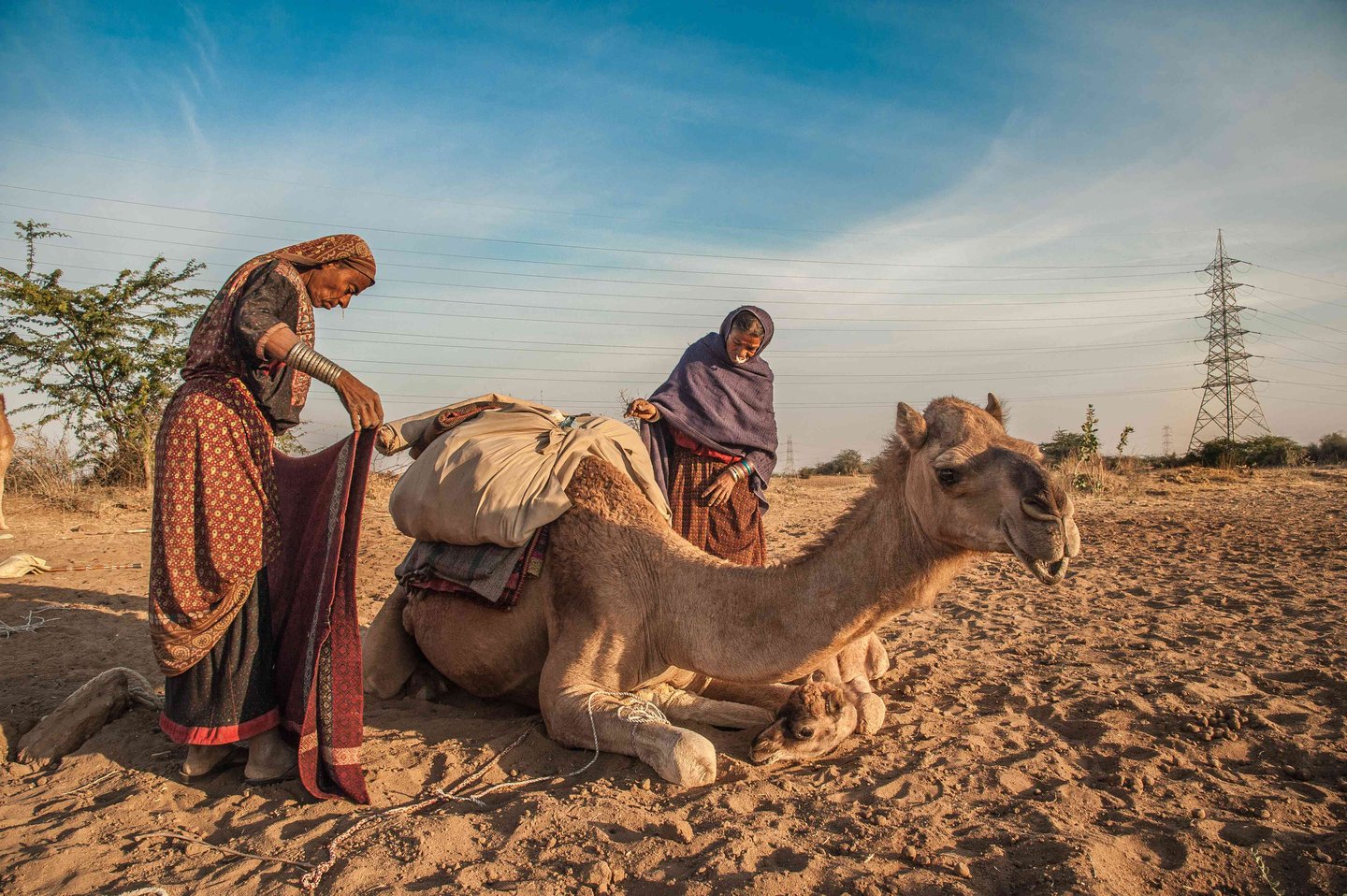 The grazing grounds are shrinking fast, forcing the nomadic Fakirani Jats to frequently change their locations in search of pastures for their camels 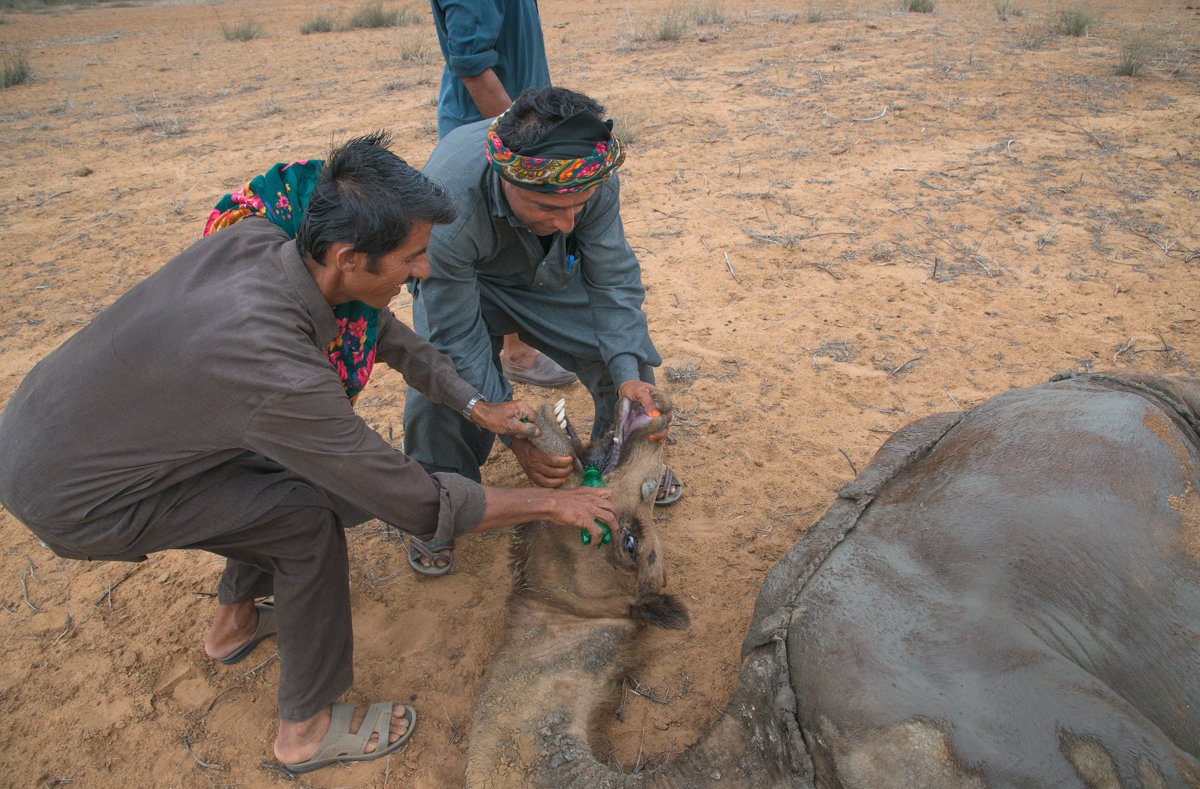 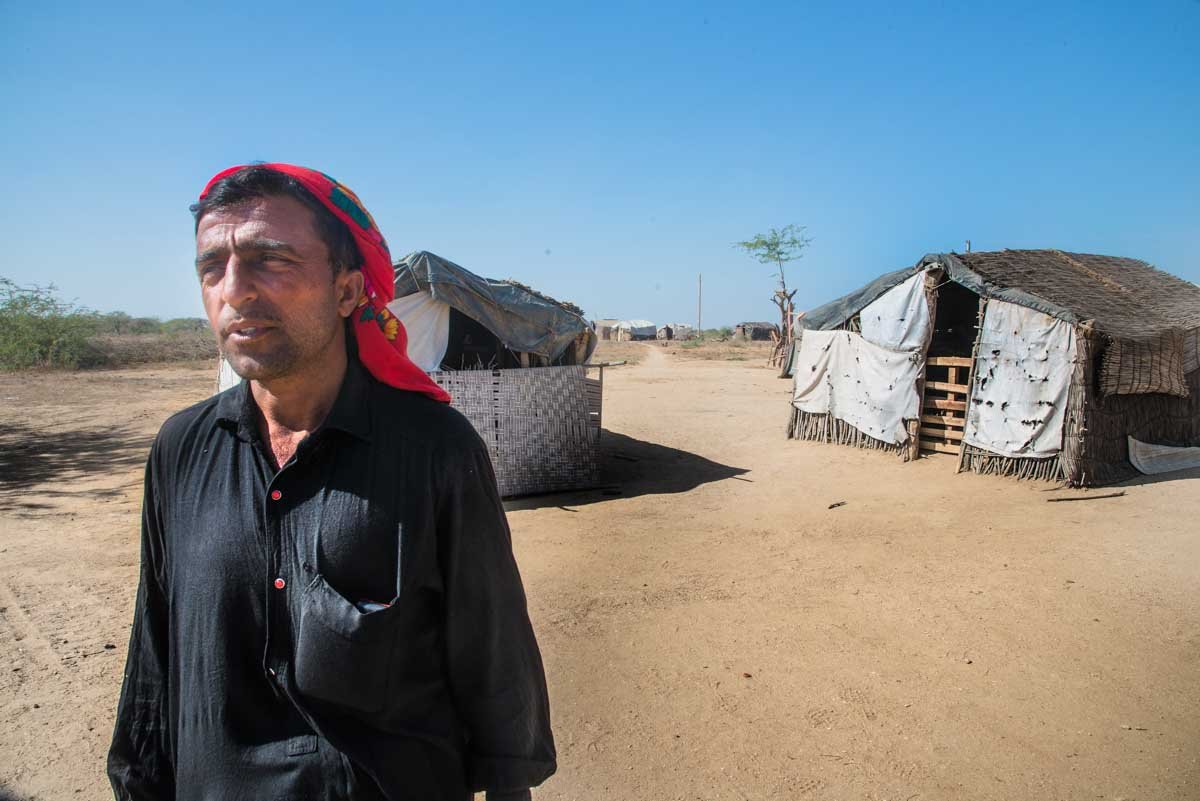 Karim Jat is among the Fakirani Jats in Mori village of Lakhpat taluka who has given up a nomadic life because of a lack of grazing grounds for his camels. “The maldhari are pareshan ,” he says. “There is no grass, no grazing, we cannot even buy fodder. There has been no rain here, we are very worried...” 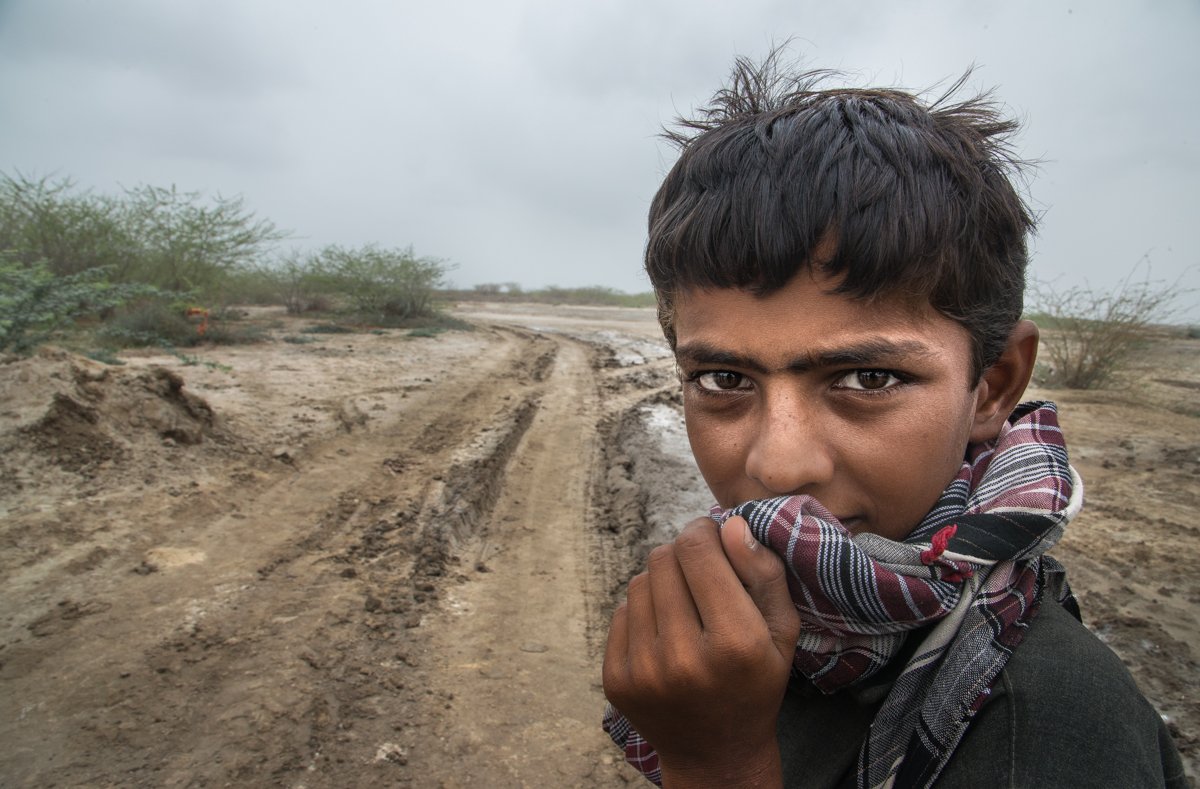 Suleman Jat, 13 years old, says, “I want to become a herder like my father. But I don’t know if grazing grounds will be available when I grow up” 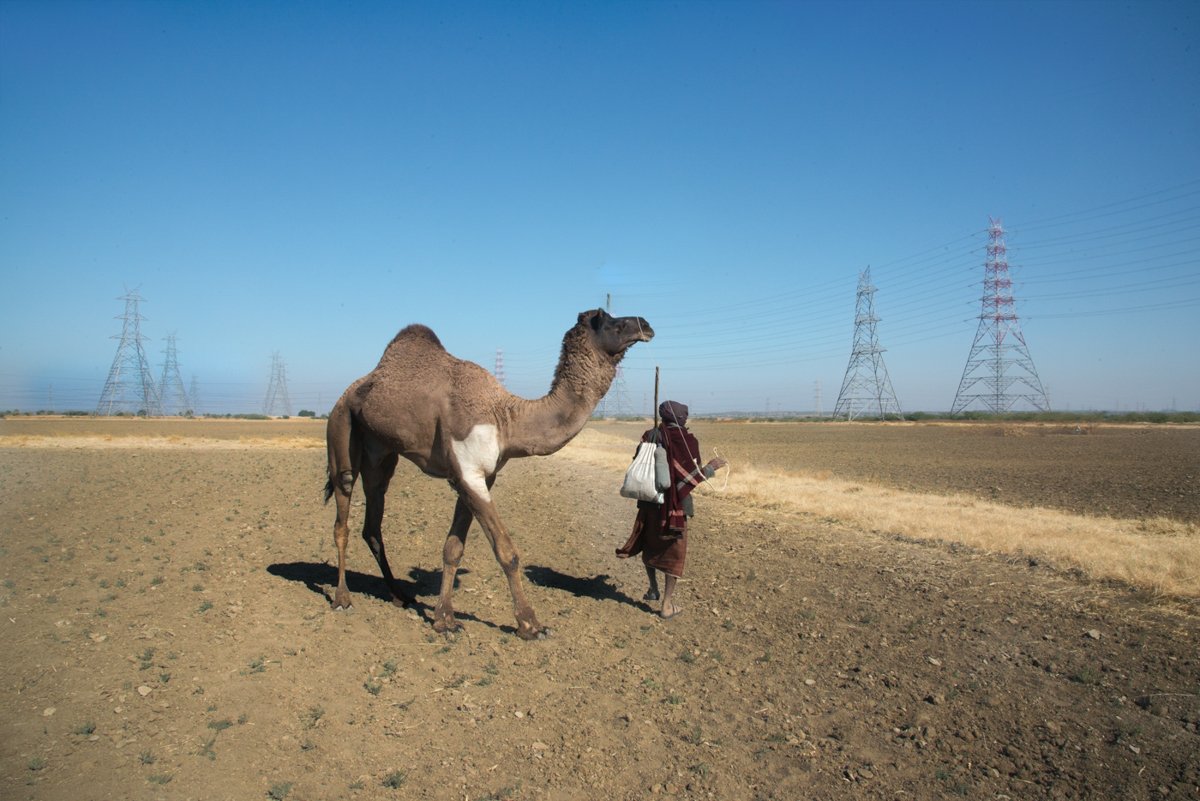 In Bhachau taluka , not far from Chirai Nani village, a despondent Ayub Ameen Jat walks through barren land in search of grazing pastures

Ramesh Bhatti is the Bhuj-based programme director and team leader at the Centre for Pastoralism in Delhi. He works on natural resource management, pastoral development, livelihoods and gender issues.