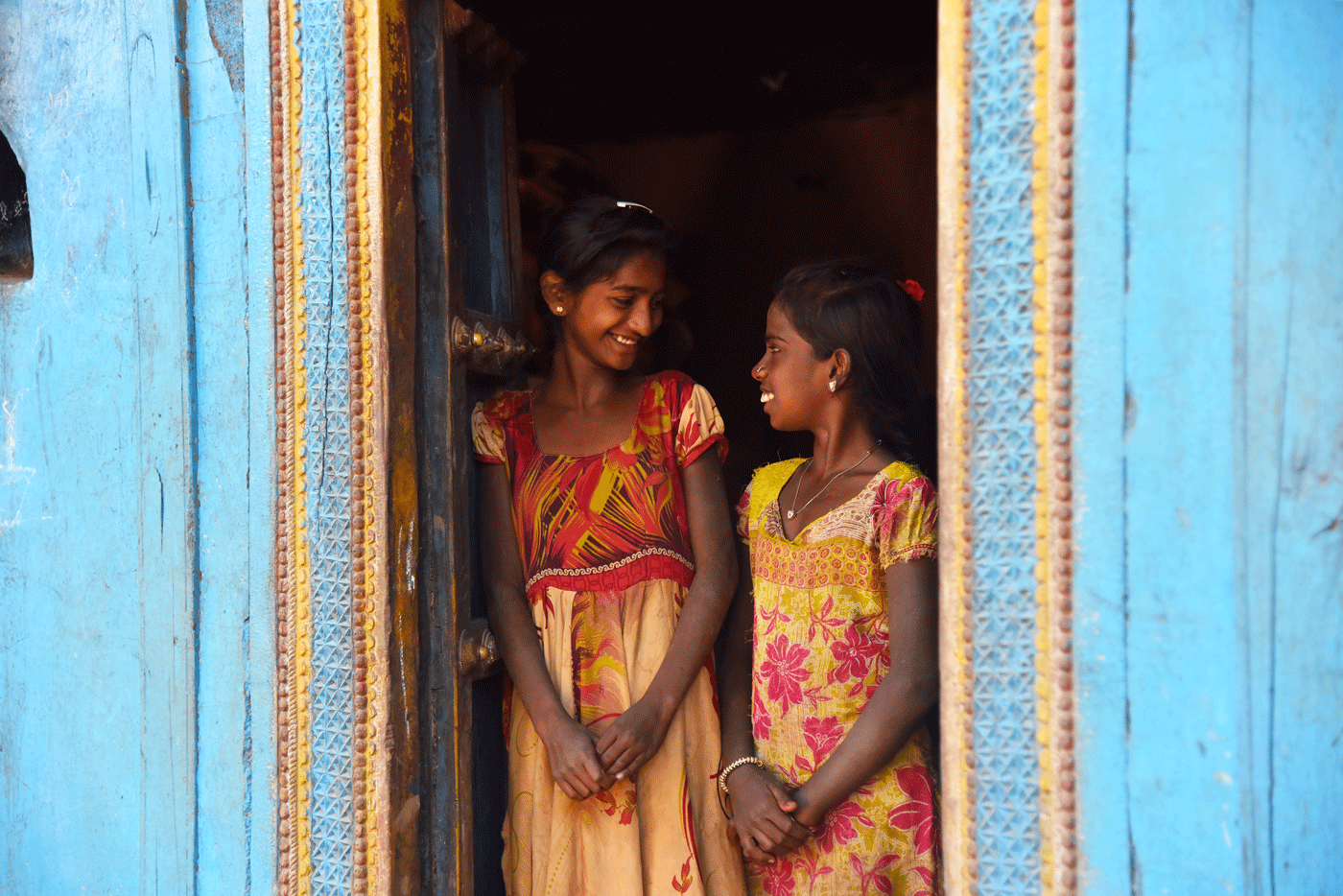 The Maharashtra government has shut down 654 zilla parishad schools, affecting thousands of children. Many now walk to far off schools, pay fees they can't afford – or drop out without an education

Mathura Nirgude giggles and says in a loud whisper, “They have not taught us anything.”  She is sitting by a bullock cart near her one-room house in Take Harsha village in Nashik district’s Trimbakeshwar taluka . Most of the village’s roughly 1,500 residents are from the Thakar Adivasi community.

Until December 2017, 11-year-old Mathura was studying in Class 5 at the zilla parishad (ZP) School in Dahalewadi village, around eight kilometres away. Then the state government shut it down. She now attends Class 6 in a school run by a non-governmental organisation in Avhate village, nearly four kilometres from Take Harsha.

When asked which school she prefers, she readily says: “The first one.”

When the ZP school in Dahalewadi shut down, the school in Avhate took in its 14 students, says Bhagwan Madhe, an education activist based in Vavi Harsha  village in the same taluka . “It does not get any grant from the state, and they don’t run it seriously,” he adds. The Avhate school – Shri Gajanan Maharaj Vidyalaya – only holds classes twice a week.

But Mathura’s loss of her ZP school in Dahalewadi is not an exception. Tens of thousands of children across Maharashtra have seen their schools closing down in the last few years. 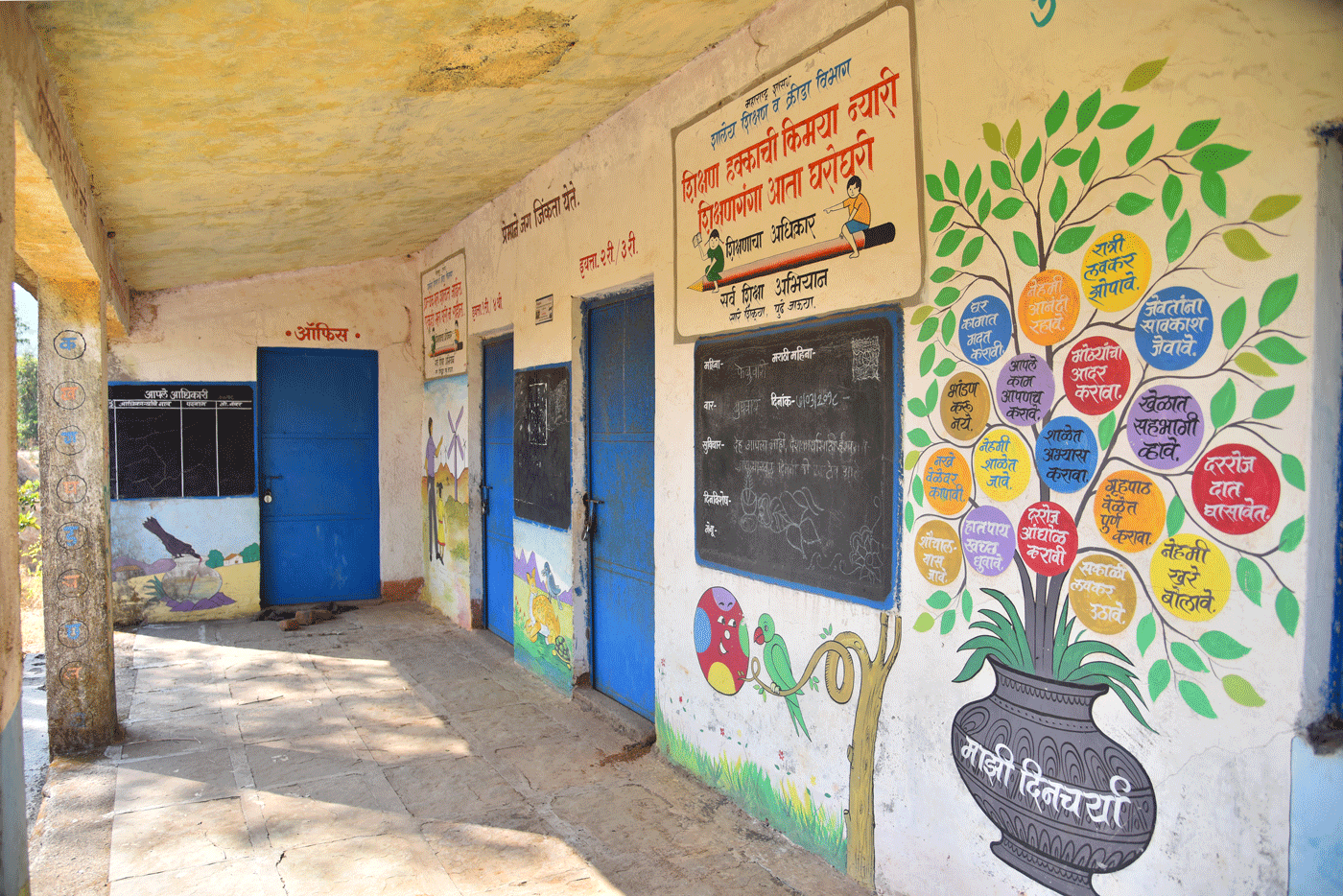 The ZP school in Take Harsha village is only till Class 4; for higher classes, students used to go to the ZP school in Dahalewadi village, which closed in December 2017

In April 2018, Education Minister Vinod Tawde said that the government has only shut schools with 10 or fewer students because it was unviable to run them. Those students, he said, have been accommodated in nearby ZP schools. In January 2018, the state proposed closing down 1,300 more schools. Education activists have strongly opposed this move.

Mathura and other students in her village though fell off the ZP roster. Her mother Bheema says the nearest still-open ZP school is further from Avhate, in Samundi, nearly 10 kilometres away. “As the girls grow up, we worry for their safety,” she says, sitting with her toddler in her lap.

Bheema and her husband Madhav are agricultural labourers, earning a daily wage for Rs. 150 each when work is available. “We do not have land. There is no other source of income,” Bheema says. “Every morning, I have to leave home and find work to be able to cook something in the evening.” Still, if Bheema has a little extra money, she gives Mathura Rs. 20 to go to school in one of the tempos or jeeps that run on shared-hire in the villages. Otherwise, the girl walks for 40 minutes through the winding roads of Trimbakeshwar. Take Harsha is located near the dam on the Vaitarna river, which Mathura has to cross to be able to attend any school, private or state-run. “During monsoons, the bridge is submerged in water,” says Bheema. “At times, we are stuck in the village for days.” 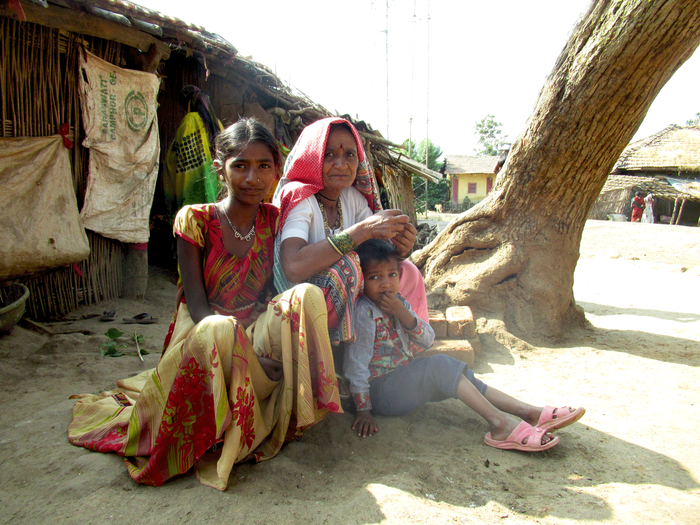 For the residents of Take Harsha, the nearest still-open ZP school is further from a private school Avhate, which too is nearly 4 kilometres away. The distances impact girls the most. 'As they grow up, we worry for their safety', says a parent

According to the Right of Children to Free and Compulsory Education Act, 2009, a state-run school must be available within a kilometre of students up to Class 5, and within three kilometres for students till Class 8. “But this is not adhered to in many places,” says Madhe.

The zilla parishads are district councils, with administrators headed by a collector nominated by the state government. In Maharashtra, the ZPs took over schools from district boards in 1961-62, and have been running them since. Most of these are primary schools, from Class 1 to 7 or 8; a few are till the secondary level of Class 9 and 10; and fewer still have Class 11 and 12.

The ZP schools offer free education, and most of the students are from families of farmers, agricultural labourers and others who cannot afford private schooling. (See Small meal, big deal for hungry students ) Among them are Adivasis and Dalits – Scheduled Tribes constitute 9.4 per cent of Maharashtra’s population, and Scheduled Castes make up 11.8 per cent of the state’s population (Census 2011).

However, instead of providing an equal shot at education to all children,  successive governments have consistently neglected public education in Maharashtra.

The Economic Survey of Maharashtra shows that during 2007-08, the state government’s expenditure on primary, secondary and higher secondary education was Rs. 11,421 crores or 1.90 per cent of the Gross State Domestic Product (GSDP). A decade later, in 2018-19, the allotment for school education (and sports) has grown to Rs. 51,565 cores, but  this is just 1.84 per cent of the total budget – pointing to the state's disinterest and diminishing allotment for schools. 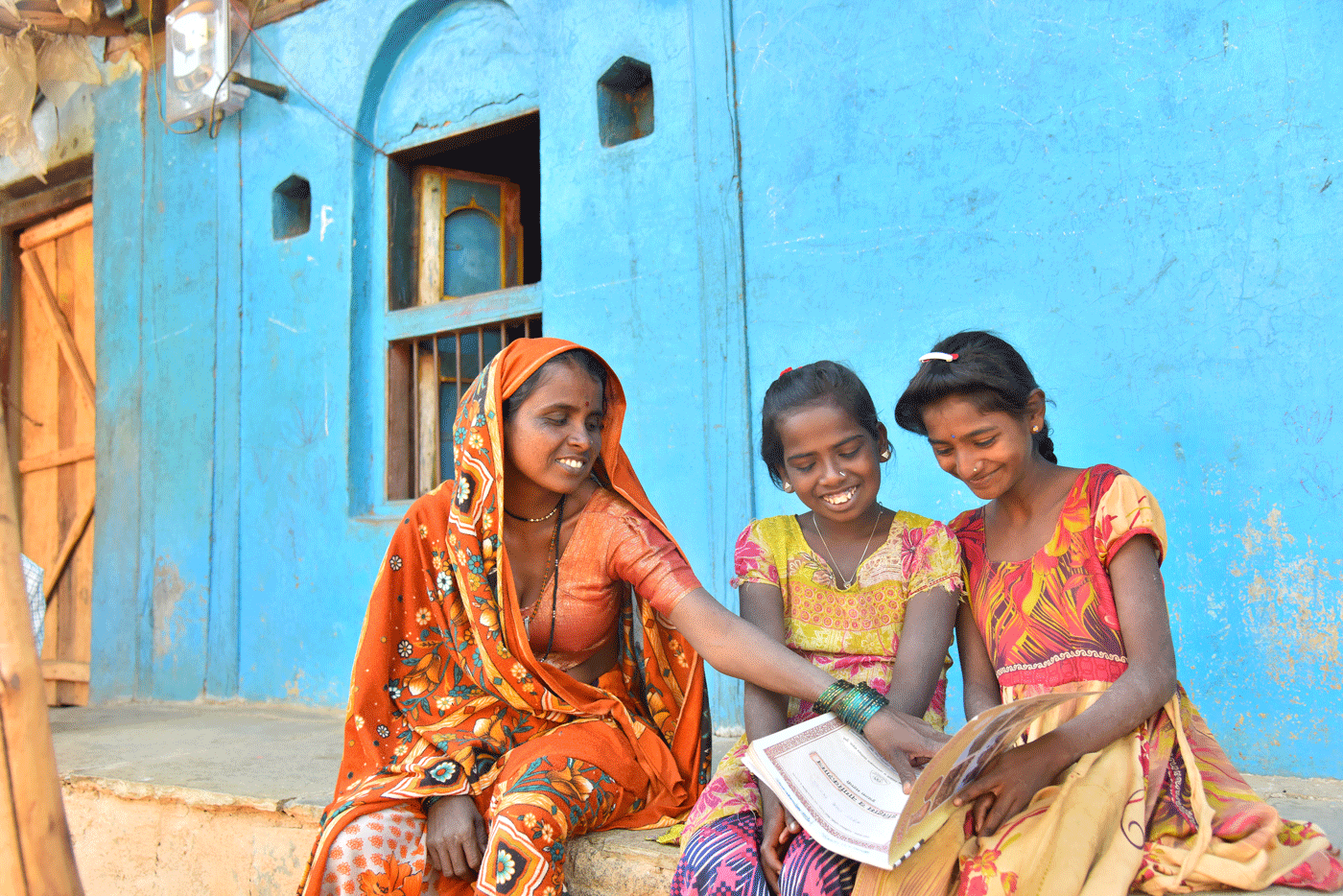 'During monsoons, the bridge is submerged in water', says Bheema Nirgude. Her daughter Mathura (centre) and her friend Jyoti Hole have to walk across the bridge to reach their new school

Ramesh Joshi, general secretary of the Brihanmumbai Municipal Corporation’s teachers' union, and a former corporator who was on corporation’ Education Committee for 16 years, says the amount should have increased. “Ideally, the education budget should be anywhere between 4-6 per cent of the GSDP. More and more students seek enrolment with time as awareness about education increases. If we reduce the budget, how can we ensure RTE [the Right to Education]?”

Kapil Patil, member of the Maharashtra Legislative Council from the ‘teachers constituency’ (nominated by teachers), adds, “They are consciously slashing the budget. It effectively makes quality education inaccessible for the deprived, perpetuating privileges [for some] in society.” (See 'I don't feel like I'm a teacher' )

Seeking a better education for their kids, some parents transfer them to private schools, often at great cost and hardship to the family. In Modnimb village in Madha taluka of Solapur district, 40 students dropped out and joined a private school nearby in 2017, says the ZP school teacher Parmeshwar Survase. 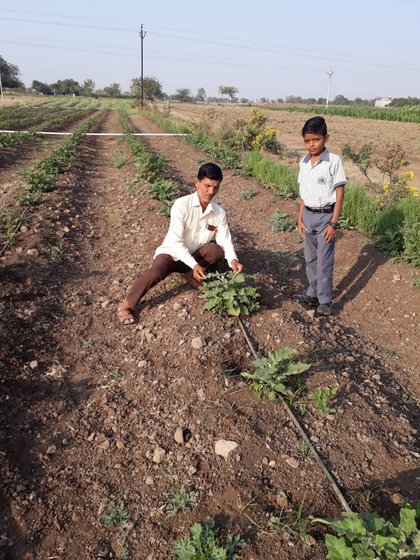 Giving up on ZP schools, Dattaray Surve has now enrolled his son Vivek in a private school

Among them was Dattatray Surve’s 11-year-old son Vivek, who is in Class 6. “Teachers would hardly be present in the class,” says Dattatray. “Many schools in other districts have their power cut off due to budget concerns. It shows the state does not care for the students in ZP schools.”

Surve, a farmer, wants his son to have the best possible education. “There is no future in farming,” he says. He now pays Rs. 3,000 as annual school fees. “I shifted him because I do not want to compromise his future.”

Besides, says Ahmednagar-based educationist Herambh Kulkarni, many families want their kids to know English well, which is why parents prefer an English medium school to ZP schools, where the medium of instruction in Maharashtra is Marathi.

However, the number of students in ZP schools is also dropping due to migrations. When farmers and labourers seasonally migrate for work, they take along their children. From the agrarian districts of Marathwada, the migrations are growing – and at least 6 lakh farmers migrate within the region or to western Maharashtra and Karnataka to work as sugarcane cutters between November and March, according to Rajan Kshirsagar, veteran communist farm leader.

Kailas and Sharda Salve migrate every year from Parbhani’s Devegaon village to a sugar factory in Telgaon Kh., Beed – 60 kilometers away. They travel with their infant son Harshavardhan, and Sharda’s 12-year-old niece Aishwarya Wankhede. “Poverty has cost her an education,” says Kailas. He and Sharda cultivate cotton and soyabean on their five-acre farmland, but are unable to make a profit that will last them the year. “She has to come with us to look after our son during the day when we toil in the fields. (See Cutting cane for 2,000 hours ) 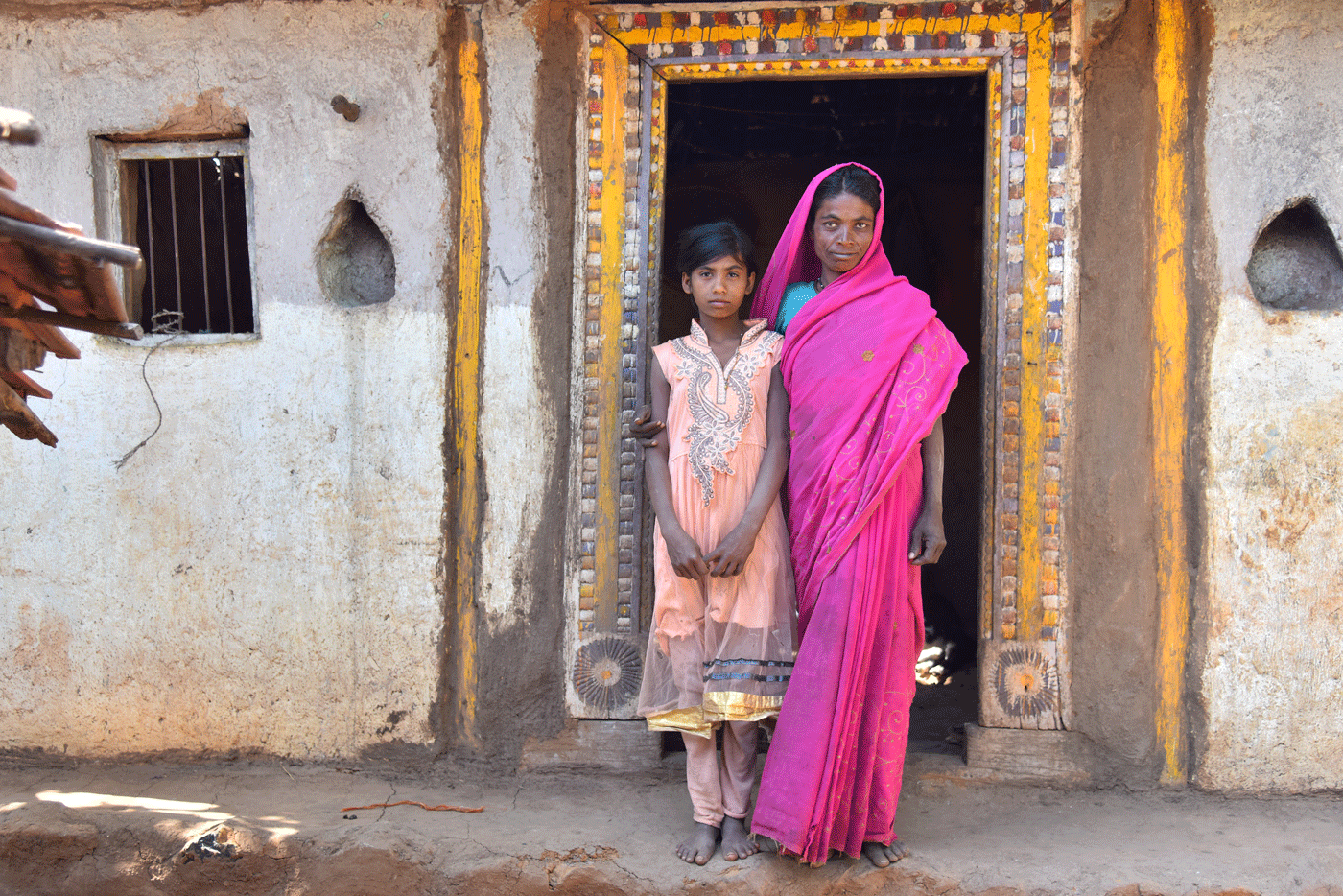 'I do not like that she [Manjula, on the left] is out of school. But her younger sister is enrolled. Only one of them could pursue education,' says Sumanbai Lashke

When a student has to drop out, very often it is the girls in the family.  Only one-fourth of women aged 15-49 in Maharashtra have completed 12 or more years of schooling, compared with 34 percent of men, says the National Family Health Survey 2015-16 .

Manjula Lashke, 13, from the Adivasi village of Vavi Harsha, quit school in 2017 because her mother Sumanbai needed help at home. “My husband is a drunkard, he doesn’t work,” she says. “When I leave the house for wage work, I need someone to look after our livestock.”

Sumanbai denies that she is thinking of Manjula’s wedding. “She is still young,” she says. “I do not like that she is out of school. But her younger sister is enrolled. Only one of them could pursue education.”

Her neighbour though says most of the girls in the village get married by 15 or 16. In the animal shed, Manjula unties the bulls and gets ready to leave for the afternoon. “I liked attending school,” she says. (See ZP schools: coping without power, water, toilets )

Now though, in the hamlets and small villages like Vavi Harsha and Take Harsha, with state-run ZP schools closing down in large numbers, even that slim chance at an education is receding for rural Maharashtra’s children.
Parth M.N.
@parthpunter