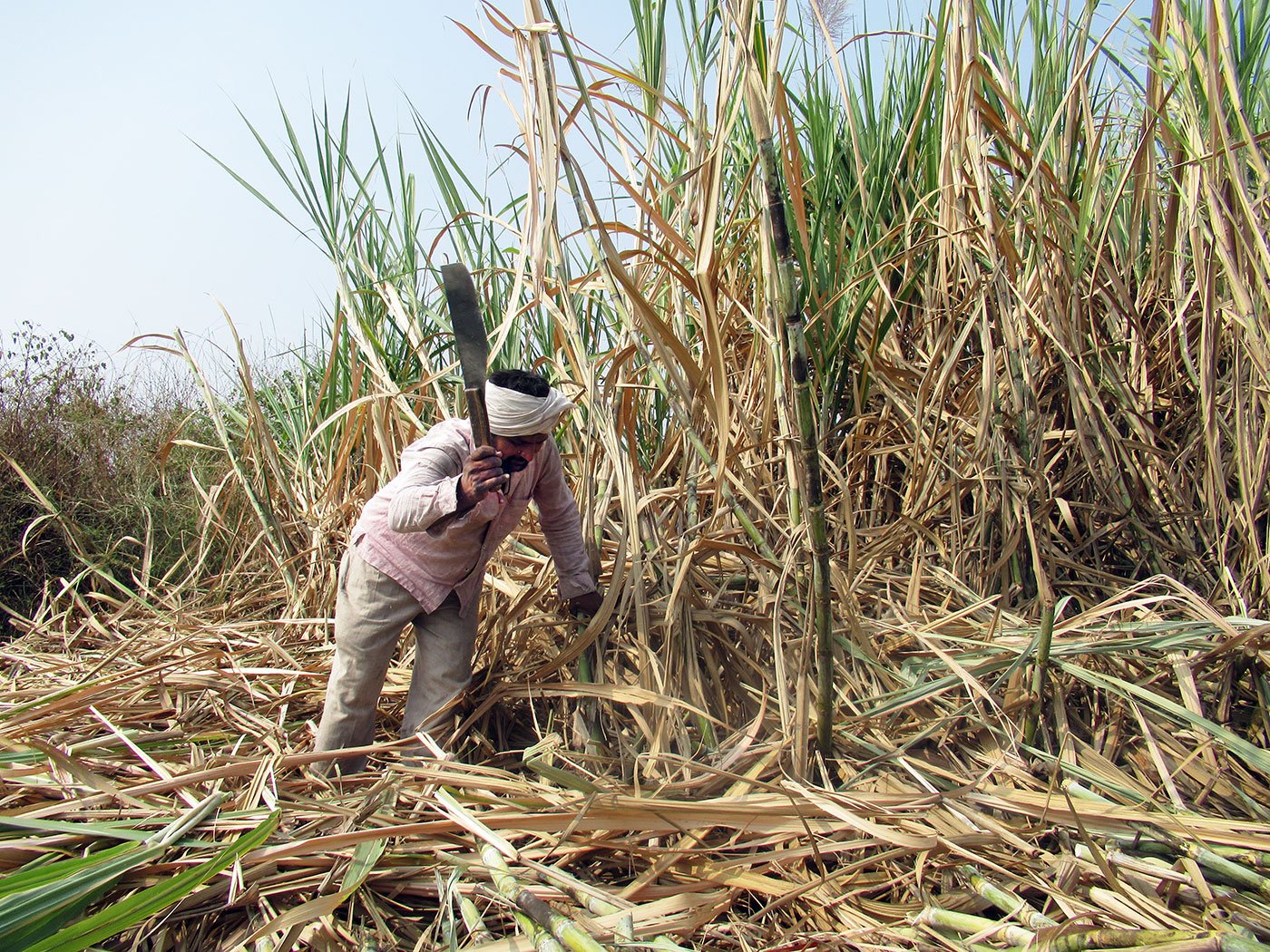 With falling farm returns, many of Marathwada’s farmers are now working as labourers in sugarcane fields – for long hours over five months, despite health risks, low wages, and the loss of their children's education

Umesh Kedar picks up a sickle, hunches over and slices the base of a sugarcane plant. He immediately moves on to the next one. Then another, and then the next. The cane cutting takes strength and force, and he is working in a four-acre field under a harsh sun. “We started at 5:30 a.m., and this will not end before 7 p.m.,” he says, without taking his eyes off the target. “This has been my day for the past two and a half months [starting in November]. And this will be my day for the next two and a half months.”

His wife Mukta takes the stalks Umesh has chopped, places them over each other on the ground, makes a set of around 10, and ties them together with the wispy lace-like portions of the stalk. Then picks up the bunch, balances it on her head, and walks towards a truck parked in a field turned slippery with the cut cane. “After a while, we switch roles,” she says. “Our shoulders and forearms ache throughout this period. We sometimes take painkillers to keep going.”

The field reverberates with the thuds of the sickle being smashed into the cane, with 10 couples working in pairs in this field in Sonnakhota village of Wadwani taluka in Maharashtra’s Beed district. Some, like Umesh and Mukta, are farmers themselves; others own no land. But without a decent profit on the cotton they cultivate on three acres, they have been forced for more than a decade to double up as sugarcane cutters. "The money we get at the end of the cane cutting period is not much," Umesh says. "But at least it is an income."

'The cooperative factories earlier and now the sugar lobby are closely connected. Which is why sugarcane fields get more water than other crops', says Rajan Kshirsagar

Many farmers in Marathwada are increasingly seeking agricultural wage work, driven away from their land by an intensifying agrarian crisis. Weather patterns are becoming more erratic and irrigation remains sparse. But in arid Marthwada, the water-guzzling sugarcane continues to grow. Uday Deolankar, agriculture officer and secretary to the president of the state Commission for Agricultural Costs and Prices, says the average rainfall in Marathwada is 700 mm per year, while sugarcane needs 2,200 to 4,000 mm rainfall. "Cotton needs 700 mm, tur 500 mm and soyabean 450 mm," he says.

Still, sugarcane usually gets irrigation preference over other crops. Rajan Kshirsagar, a Parbhani-based farm activist and Communist Party of India (CPI) leader, says sugarcane is a political crop. "Vested interests of influential politicians revolve around sugarcane," he says. "The cooperative factories earlier and now the sugar lobby are closely connected. Which is why sugarcane fields get more water than other crops." 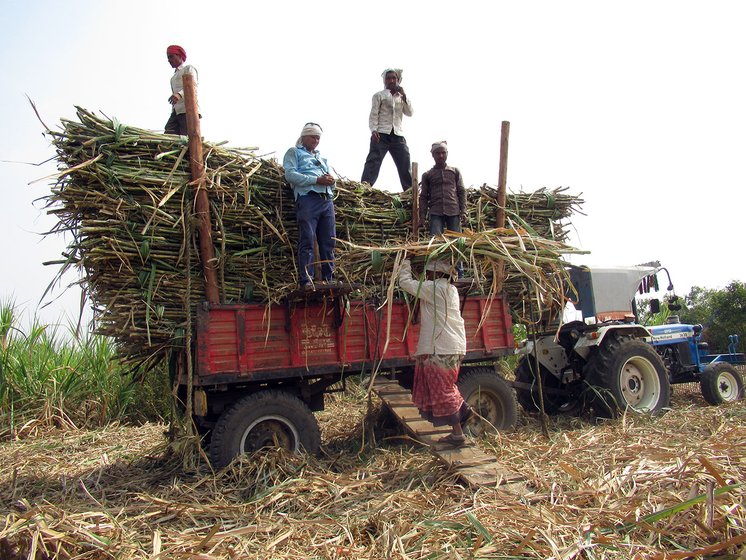 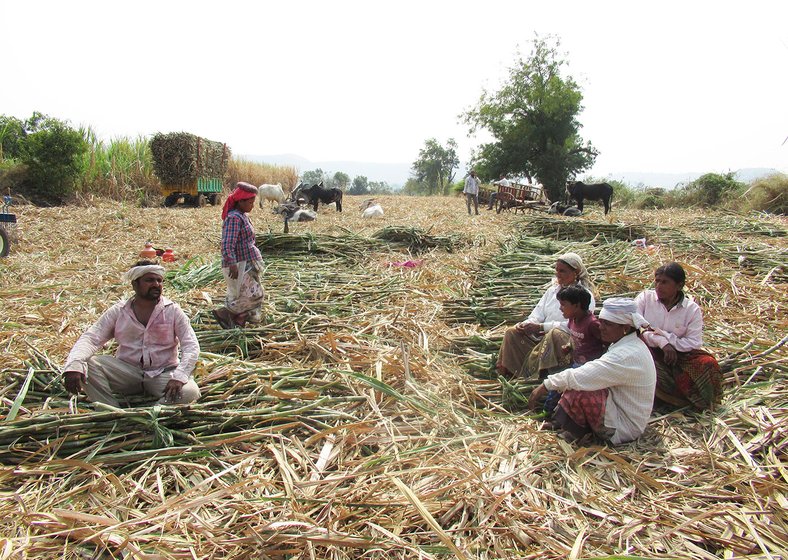 Left: Mukta and others load the cut sugarcane on to trucks. Right: The labourers take a rare brief break during their long work day

Even if the monsoon is adequate, the fluctuating market prices for crops do not guarantee a profit due to the rising production costs. The Price Policy for Kharif Crops report (2017-18) of the Commission for Agricultural Costs and Prices states that the cost of production of jowar , for example, is Rs. 2,089 per quintal, while the state-mandated minimum support price (MSP) was Rs. 1,700. For cotton, the MSP was Rs. 4,320, and the production cost was Rs. 4,376.

Meanwhile, on the sugarcane fields – which generate robust profits for factory owners – the wage rate for a couple is Rs. 228 for every ton of sugarcane they cut. In a day, Mukta says, two of them cannot chop more than two tons. “By the end of five months, we will make about 55-60,000 rupees,” she says, taking a break for a modest lunch of bhakri made from jowar and a chilli-garlic chutney at around 2 p.m.

The women start working even before coming to the fields, and continue well after the farm labour for the day ends. “I wake up at 4 in the morning to make lunch for the two of us and our kids [aged 6, 8 and 13],” says Mukta. “When we get back after toiling in the fields, I have to make dinner. I hardly get 3-4 hours of sleep during this [cane-cutting] period.”

Mukta and Umesh have a debt of Rs. 60,000 from a bank, and Rs. 40, 000 from a private moneylender, taken during the four-year drought period in Marathwada from 2012-15. This ensures they are caught in a cycle of repaying and borrowing. Still, the two are somewhat better off than others. They belong to the same village where they have been assigned work by the contractor who provides labour to sugarcane factories, allowing their children to continue school.

But others from here have migrated to the 75 sugarcane factories in Marathwada. And many journey hundreds of kilometres away to work at the sugar factories of Satara, Sangli and Kolhapur in western Maharashtra or to Belgaum district in Karnataka.

I travelled with a group of agricultural labourers on a tractor in November 2017, from Beed to Belgaum. It took 50 hours over two days and nights to cover the roughly 500 kilometres (See The long road to the sugarcane fields ). After the tiring journey, the migrants begin work the very next morning. They sleep in makeshifts huts made of hay, cook food under the open sky and bathe in the open (the women behind flimsy curtains of clothes hung on a rope). They have to fill and carry water from nearby handpumps, wells or dams.

A former collector of Beed estimates that close to 125,000 farmers migrate from Beed alone to work as agricultural labourers. Rajan Kshirsagar says studies conducted by CPI trade unions estimates there are around 600,000 sugarcane workers in Marathwada, which includes those who migrate within the region and those who migrate to western Maharashtra and Karnataka.

Among them are Lata, 27, and Vishnu Pawar, 30, of Malewadi village in Beed, their two kids, Vishnu’s two brothers and their wives and kids. They have all come to a sugar factory outside Belgaum city, in Hukkeri taluk of Karnataka. Their hut and several others are spread across the ground extending from the factory. 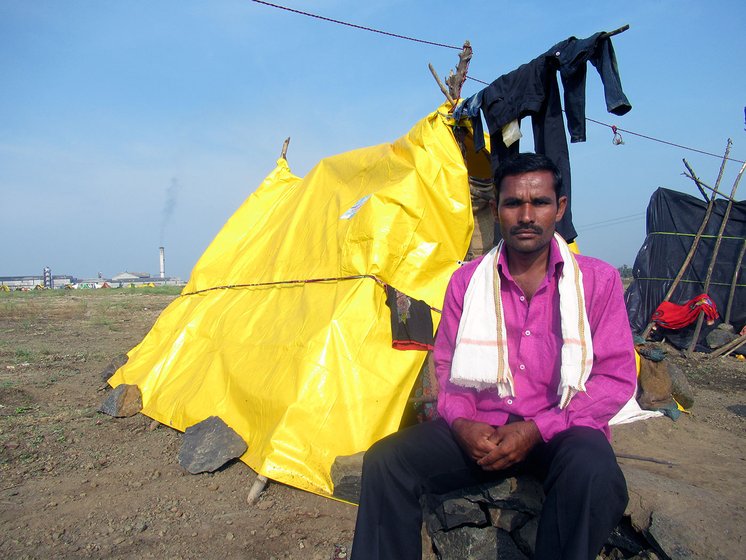 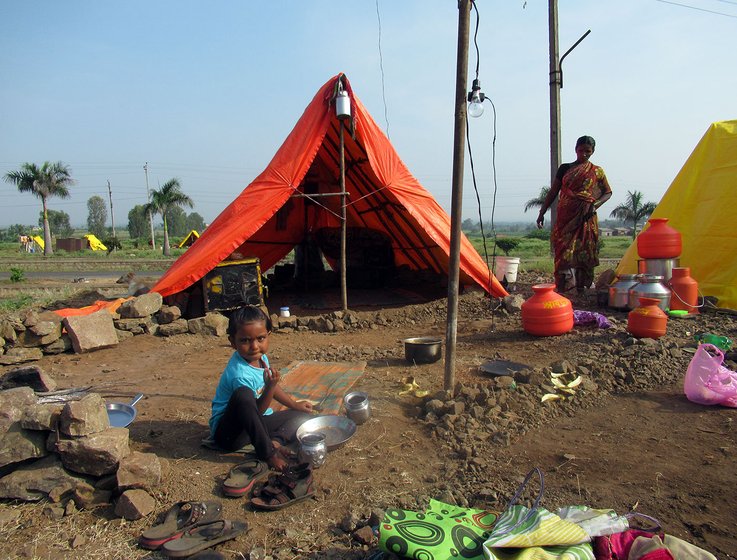 Vishnu Pawar (left) and his family at their makeshift tent just outside Belgaum city, where they work in the merciless cane fields

For Vishnu, life in the cane fields is merciless. “At times, we get injured while chopping sugarcane, but we cannot take a break,” he says. “We have to incur even medical expenses. We are paid a lump sum in advance and it is calculated against the sugarcane we cut. If we rest due to injury, we lose work – and money.”

Vishnu and Lata’s eight-year-old daughter Sukanya has come with them to look after her three-month-old brother Ajay while their parents work in the field. During these cane cutting months, she will not attend school. “We had to bring her along,” says Lata, sitting outside their small makeshift shed. “It was not possible to leave my newborn son behind. We know it will affect her studies [she is in the third standard], but there was no option.” 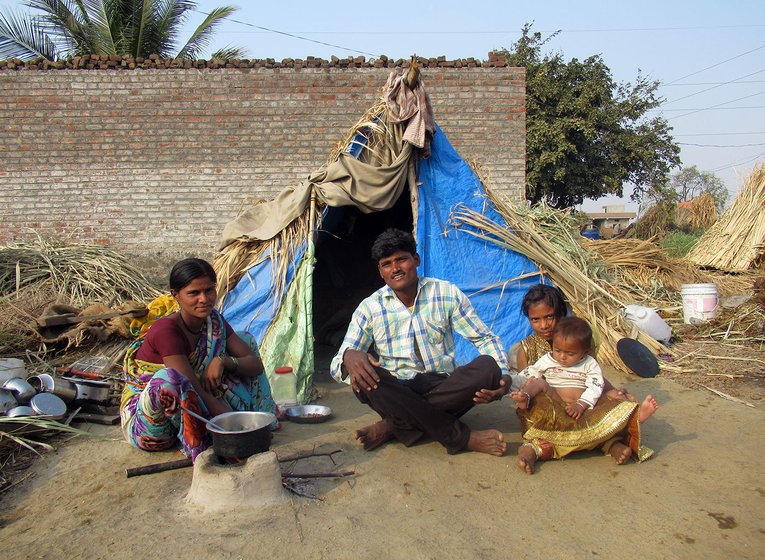 Often, older children travel with their parents during the cane cutting season to look after younger siblings or nieces and nephews during the work day.  Kailas and Sharda Salve, who have come from the neighbouring district of Parbhani  to a sugar factory in Telgaon, 45 kilometres from Beed city, have brought along their one-year-old son Harshavardhan. Accompanying them is Sharda’s 12-year-old niece, Aishwarya Wankhede. "Poverty has cost her an education," says Kailas, who cultivates cotton and soybean on his five-acre farmland in Devegaon. "It is a difficult life here. I injured my hand the other day while cutting cane with the sickle. I spent my own money for the treatment – around 500 rupees. And I couldn't even take a day off,  that would reduce my wage."

Health usually takes a backseat due to the unforgiving nature of the work, as it did for as Bibhishan and Ranjana Babar too. Seven years ago, the couple had migrated to Wagholi in Satara district, over 250 kilometres from their village, Wadgaon, in Beed. “One day, he became seriously ill,” she recalls, “and he kept working. When he could not even stand up, I took him to the doctor, who said he had jaundice.” Ranjana brought Bibhishan back to Beed by bus. “I was alone,” she says. “I admitted him to a civil hospital here. He died two days later.”

Within a month, Ranjana had to return to Wagholi, toiling to repay the money the couple had taken as advance payment to cut cane. She now lives in Beed city and works as a cleaner in a school for Rs. 4,500 a month. She does not cut cane anymore because the sugar factories only hire couples.

Every year, as the cane-cutting season approaches in October-November, the labourers demand a wage hike. But, Umesh says, the factories and government are aware of their helplessness. “They know we have no option,” he says.