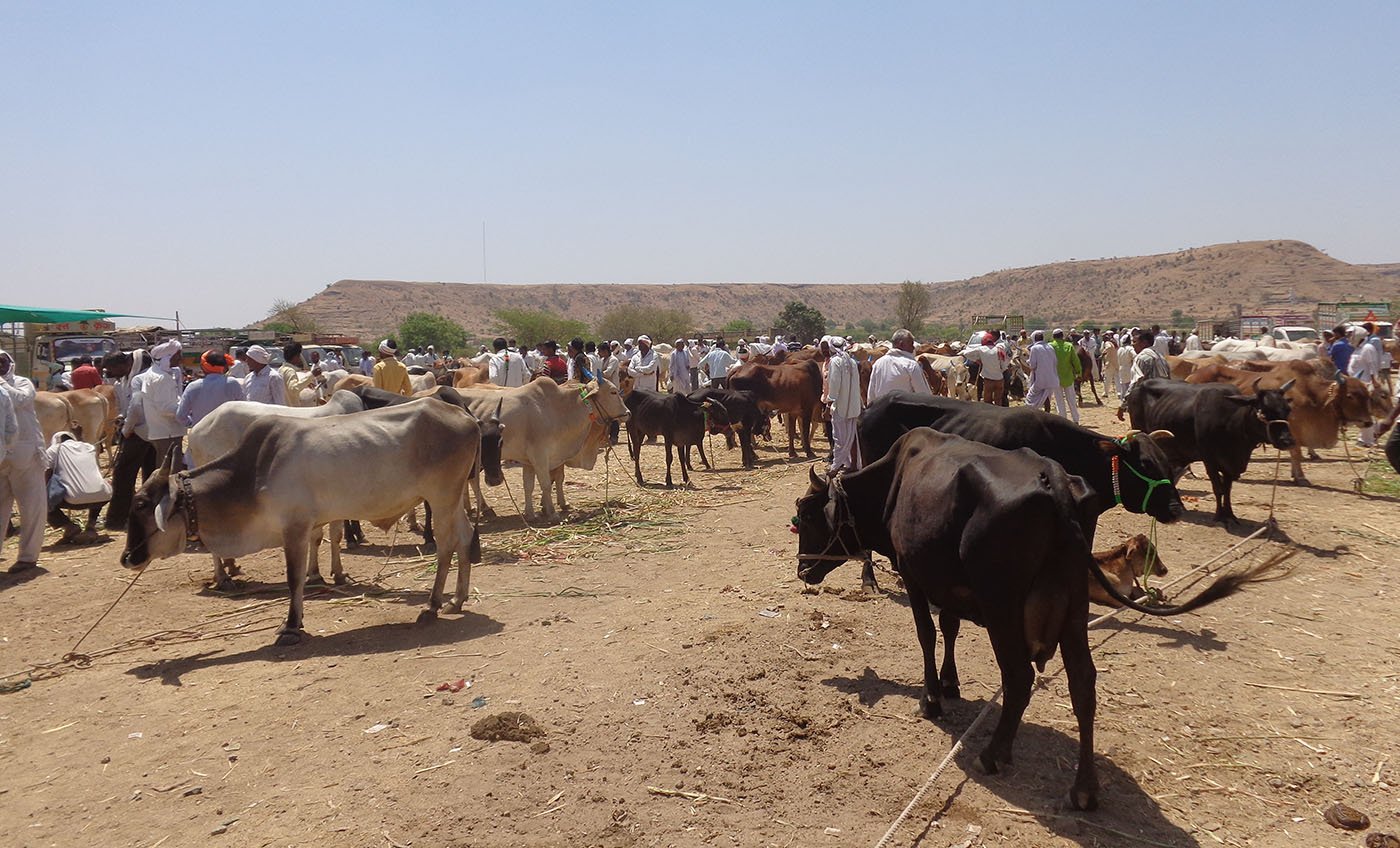 Not quite a cash cow

Across Marathwada, in 45 degrees heat, farmers already trapped in the agrarian crisis are walking many kilometres from market to market, trying desperately to sell their cattle to raise some money – a task made nearly impossible by the beef ban

Appasaheb Kothule, 45, wants to sell two of his bulls. He can’t do that. Qaleem Qureshi, 28, wishes he could buy bulls. But he, too, cannot.

Kothule has been travelling to various bazaars for over a month. He has attended all the weekly markets held around Devgaon, his village, roughly 40 kilometres from Aurangabad city, in the Marathwada region of Maharashtra. Today, he has arrived in Adul, where villagers fill the marketplace every Tuesday. “My son is getting married and I need some money,” he says, a white handkerchief wrapped around his forehead. “Nobody is willing to pay more than 10,000 rupees for the pair. I should get at least Rs.15,000 for them.”

Meanwhile, Qaleem Qureshi sits idle at his beef shop in Aurangabad’s Sillakhana area, wondering how to resurrect his dwindling trade. “I used to do business of 20,000 rupees a day [with earnings ranging from Rs.70-80,000 a month],” he says. “Over the past two years, it has declined to a fourth of that.”

'I have spent a few thousand rupees in transporting the bulls to various bazaars,' says Appasaheb Kothule of Devgaon; other farmers too are spending sums they cannot afford

The beef ban in the state is a little over two years old. By the time Devendra Fadnavis of the Bharatiya Janata Party became the chief minister of Maharashtra in 2014, the agrarian crisis had deepened under the previous Congress and Nationalist Congress Party regimes.  A lethal combination of rising input costs, fluctuating rates for crops, water mismanagement and other factors had set in motion widespread distress and tens of thousands of farm suicides in the state. Fadnavis managed to intensify the crisis by extending the prohibition of cow slaughter to bulls and bullocks in March 2015.

The bovine is central to the rural economy and the ban has had a direct impact on businesses that depend on cattle. It has equally impacted farmers who, for decades, used the animals as insurance – they traded their livestock to raise instant capital for marriages, medicines, or an upcoming cropping season.

Kothule, who has five acres of farmland where he cultivates cotton and wheat, says his financial calculations have been hit by the ban. “These two bulls are only four years old,” he says, pointing to his tethered animals. “Any farmer would have swiftly bought them for 25,000 rupees a few years ago. Bulls can be used on farmlands until they are 10.”

Watch video: Farmers in Marathwada talk about their desperate search for buyers

But now farmers are reluctant to buy cattle even though the prices have plummeted, knowing it will be difficult to get rid of them later. “I have spent a few thousand rupees in transporting the bulls from my home to various bazaars,” says Kothule. “Adul is four kilometres away, so I walked with my bovines today. Other weekly bazaars are in a 25-kilometres radius, so I have to hire a bullock cart. I already have a debt burden. I need to sell these bulls.”

As we talk, Kothule keeps a desperate eye out for buyers. He has reached the market at 9 a.m., it is now 1 p.m., and extremely hot. “I have not even had water since I reached,” he says. “I cannot leave the bulls alone even for five minutes for fear of missing out on a customer.”

Around him in the bustling maidan, with temperatures touching 45 degrees Celsius, various farmers are trying everything possible to crack a deal. Janardan Geete, 65, from Wakulni, 15 kilometres from Adul, is getting the horns of his robust bullocks sharpened to make them look more attractive. Bhandas Jadhav, with his sharpening instrument, will charge Rs. 200 per animal. “I had bought them for 65,000 rupees,” Geete says. “I will be happy to settle for 40,000.”

Kothule says the growing water shortage in Marathwada and rising fodder costs have made it more difficult to maintain livestock. Added to this is a lack of cow shelters. When Fadnavis imposed the beef ban, he promised to start shelters where farmers could donate their cattle instead of being forced to bear the costs of maintaining animals that could no longer work on their farms. But the shelter have not materialised, dealing the farmers a double blow – they cannot raise money by selling their livestock and are stuck with the animals even after they become unproductive.

“How can we maintain our old livestock when we cannot even properly provide for our children?” asks Kothule. “We spend 1,000 rupees per week on each animal's water and fodder.”

Many others across the rural economic spectrum have been hit by this one amendment in the law – the beef ban. Dalit leather workers, transporters, meat traders, those who make medicines from bones, have all been hit hard.

Watch video: Incomes have dropped hugely after the ban, say Anees Quereshi, a butcher and loader,  and Qaleem Qureshi, who owns a beef shop in Aurangabad's Sillakhana

Around 300,000 bulls were slaughtered each year in Maharashtra prior to the ban. Now, the slaughterhouses are idle and entire communities in economic distress. At Sillakhana, which hosts close to 10,000 Qureshis – a community that traditionally works as butchers and cattle traders – the impact is palpable. Qaleem has had to sack a few of his staff. “I too have a family to feed,” he says. “What else could I do?”

Anees Qureshi, 41, a loader in Sillakhana, says, “I used to make at least 500 rupees a day. Now I do odd jobs. The income is not guaranteed. There are days when I have no work.”

Business before the beef ban was already hit by the growing agrarian crisis – people from the villages have been migrating in greater numbers looking for work. This has meant a substantial drop in the local consumption of beef, says Qaleem. But his shop, owned by the family since Qaleem’s great grandfather’s time, is all he has. “Our community is not very well-educated [and cannot easily shift to other work],” he says. “We sell buffalo meat now. But people do not like it as much and the competition with other meat products is stiff.”

Beef has formed a major part of the diet of the Qureshis, as well as various other communities, including the Dalits – it is a relatively cheap source of protein. “Replacing beef with chicken or mutton means spending thrice the amount,” says Qaleem.

At the bazaar in Adul, Geete, who was sharpening the horns of his cattle, is one of few to go home smiling after a farmer agrees to buy his animals. Dyandeo Gore looks at him with envy.

Gore has walked seven kilometres to Adul with his bull: the last of seven, which he sold over the years. His debt of around Rs.6 lakhs has magnified in five years. By selling his last bull, he hopes to raise money ahead of the cropping season. “Nature does not support us. The government does not support us,” he says. “Wealthy businessmen do not commit suicide. Debt-ridden farmers like me do. It is a daily misery. I do not know of a single farmer who wants his son to be a farmer.”

At the age of 60, Gore is wandering in the heat from market to market on foot with his bovine, because he cannot afford any transportation. “If I fail to sell him today, I will go to another bazaar on Thursday,” he says. “How far is that?” I ask him. “Thirty kilometres,” he says.