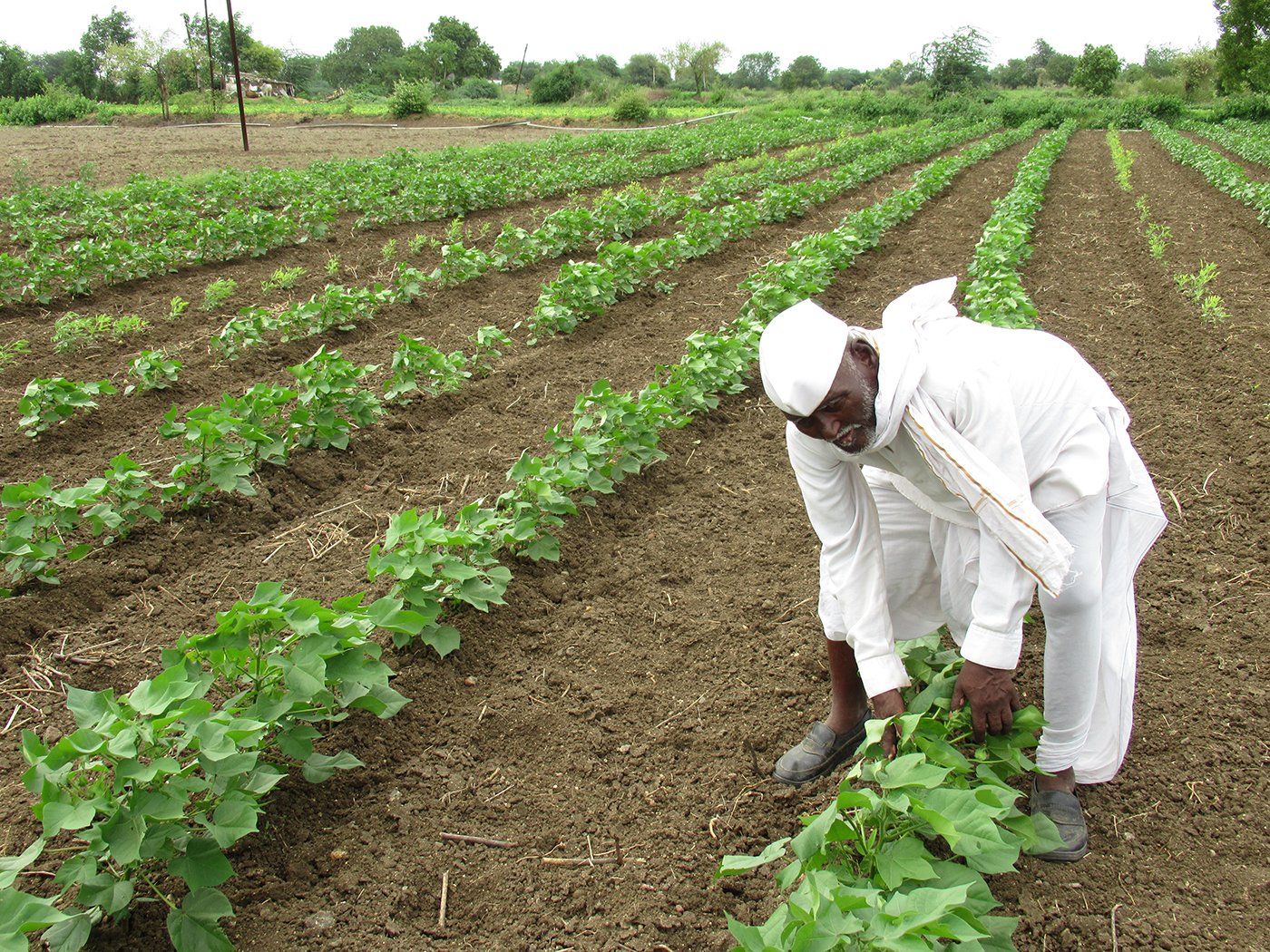 Cotton farmers in Marathwada have seen a steady rise in input costs – seeds, fertilisers, electricity, water – but profits remain poor in the absence of state support, forcing many to abandon this ‘cash’ crop

Prabhakar Chavhal, 30, has a tougher job than his uncle, Shivaji Chavhal, 55. Both are farmers in Moregaon village in Marathwada’s Parbhani district. Both mainly grow cotton. But while Shivaji’s cotton had for years been a cash crop, Prabhakar’s same crop no longer brings much cash.

The Chavhals are not alone. Parbhani, Hingoli and Aurangabad districts in Marathwada nurture vast cotton belts – 17.60 lakh hectares, according to the state agriculture department. The crop used to generate higher returns as compared to food crops such as jowar , tur and soyabean – the reason cotton is called a ‘cash’ crop. However, the production cost of cotton has risen over the years, while the returns have remained almost stagnant, turning cotton into a cash crop in name only.

Prabhakar explains the slide in detail. He takes out a piece of paper on which he has written all the expenses he incurs to cultivate one acre of cotton – Rs. 800 for a bag of seeds, Rs. 1,100 as wages to labourers to prepare the land ahead of the sowing period in mid-June, and Rs. 400 more at the time of sowing. If the monsoon rains are good, he will need to remove the weeds in three phases, which is another Rs. 3,000 as wages. Fertilisers? Rs. 3,000 more. Pesticides come to Rs. 4,000. Harvesting costs are Rs. 5,000.

And it’s not over yet. The final hurdle is selling it in the market, which costs Rs. 3,000 per harvest, including transport and commissions to be paid to traders.

“It adds up to 20,300 rupees per acre,” Prabhakar says. The anticipated market rate this year, when he harvests his cotton in November-December, is Rs. 4,300 per quintal (last year it was Rs. 4,000). “The income [after all costs] is 34,800 rupees,” he says. So eight hard months of work and investments yields just Rs. 14,500 per acre. And then Chavhal has to pay electricity bills for the water pumps and borewells — and spend more than Rs. 14,000 per month on his six cows. 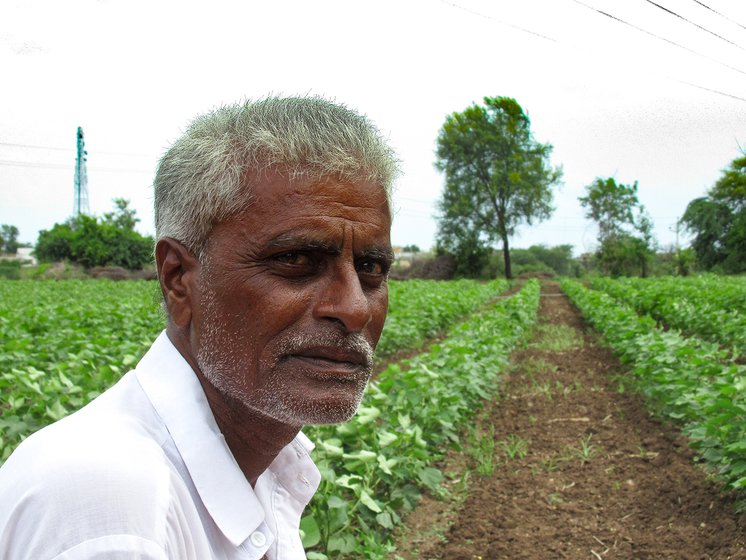 Fifteen years ago, Shivaji Chavhal of Moregoan village cultivated an acre of cotton for Rs. 5,000; now his nephew, Prabhakar, spends Rs. 20,300 per acre

Around 15 years ago, Shivaji Chavhal was able to cultivate an acre of cotton for Rs. 4,500-5,000. The pesticides, fertilisers and seeds used to cost less than half of what they cost now. Daily wages of agricultural labourers have also more than doubled. Electricity costs too have risen.

Prabhakar’s 15-member joint family, including his uncle Shivaji, owns about 30 acres of farmland, of which 15 acres used to be reserved for cotton. They have reduced it to 7-8 acres over the past four years, replacing the cotton with food crops like tur , moong , urad and soyabean.

Cotton is a thirsty crop, requiring much more water than food crops. Four years of drought from 2012-2015 in Marathwada played havoc with cotton yields. This year, too, the rains have been inconsistent. The dry years have forced farmers to spend more on irrigation – by drilling borewells, purchasing water tankers, or digging wells.

The low price is due to various factors, including the government’s refusal to consider the rising input costs when fixing the minimum support price (MSP) for the crop. Another reason, says Vijay Javandiya, veteran farm leader, is that the price of cotton in the international market is heavily subsidised for the American cotton grower, which negatively influences a fluctuating domestic rate in India. “Also, though both sugarcane and cotton are cash crops, different yardsticks are applied to them,”  he says. “When there is a glut in the market, sugar is exported with subsidies so it does not affect the prices so much. There are no subsidies to export cotton. Similarly, there is 50 per cent import duty on sugar, while there is no import duty on cotton."

“Look at all the expenses today,” Chavhal adds. “They have drastically gone up. Look at the growth in salaries of the working class [such as teachers, government employees or bank officials]. And compare that with our graph. Is it fair?”

While cotton farmers are being squeezed between mounting costs and stagnant returns, a single medical emergency, a marriage in the family, or even the added cost of school fees can force them to apply for a bank loan. Or, worse, approach a private moneylender, who typically charges an exorbitant 5 per cent interest per month. 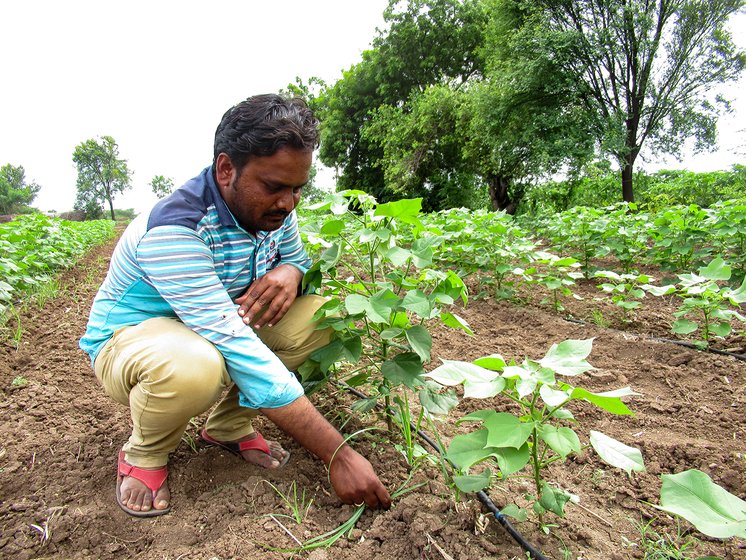 Prabhakar Chavhal's family has reduced the acreage devoted to cotton, replacing it with food crops like tur, moong, urad and soyabean

Prabhakar Chavhal paid for the weddings of his two sisters in part from a Rs. 8 lakhs bank loan, most of it taken during the 2012-15 drought years; some of this money  also helped the family manage during the lean years. But since the recent state government loan waiver has a cut-off limit of Rs. 1.5 lakhs, Prabhakar’s family is not eligible for a waiver. “I do not have a loan with the private moneylender,” he says. “But for how long will that last?”

In 2006, the Swaminathan Commission, which was set up on the directive of the Congress government to assess the farm crisis and come up with solutions, submitted its report . One of its major suggestions was that the central government provide an MSP to farmers that would add up to the cost of production plus 50 per cent. But the government did nothing. In 2014, the opposition Bharatiya Janata Party campaigned vigorously in agrarian areas, promising to enforce the report, but after coming to power has not implemented the report’s recommendations.

Asaram Lomte, a senior journalist and Sahitya Akademi award-winner based in Parbhani, says for farmers used to cultivating cotton, alternatives such as tur or soyabean  aren’t promising either because these crops too are not being given a fair MSP, and returns on such food crops are anyway relatively low.

Besides, even BT Cotton, a genetically modified variety engineered for resistance to the bollworm, which was introduced to India around 15 years ago, now requires pesticides. “Before BT, farmers spent quite a bit on pesticides,” says Lomte. “From the year 2000 onwards, that reduced considerably. However, BT performed well for merely 4-5 years. Since then, farmers have been compelled to spray pesticides to prevent deterioration, and it has again increased their production costs.”

In 2015, Savita Dasalkar raised money for the sowing season by mortgaging her gold: ‘We have still not been able to recover it. The thing is, when we gain, we gain just enough. But when we lose, we lose a lot’

Watch video: Santosh Dasalkar of Khupsa village says he has not been able to make a profit from cotton cultivation since 2012

Santosh Dasalkar, 26, in Parbhani’s Khupsa village, says he has not been able to make any profit from cotton since 2012. “The crop should be around waist high by now [August],” he explains. Yet it is barely reaching the ankle. “Even if it rains well for the rest of the monsoon, there is no way I can harvest over three quintals per acre. Except last year, this has been the story since 2012.”

Dasalkar has a seven-acre farm adjacent to the Parbhani-Selu highway, of which five acres are for cotton. He has two kids, six and eight years old, who are studying in a municipal school. “Private schools ask for  5,000 rupees as donation,” he says. “And here I have a bank loan of 2 lakh rupees.”

After 2015  turned out to be another year of drought, Savita Dasalkar, Santosh’s wife, raised money for the sowing season. “We mortgaged my gold worth 70,000 rupees with a loan company and got 40,000 for it,” she says, “Without this, we would not have been able to do any sowing. The gold was made at the time of my wedding. We have still not been able to recover it. The thing is, when we gain, we gain just enough. But when we lose, we lose a lot.”