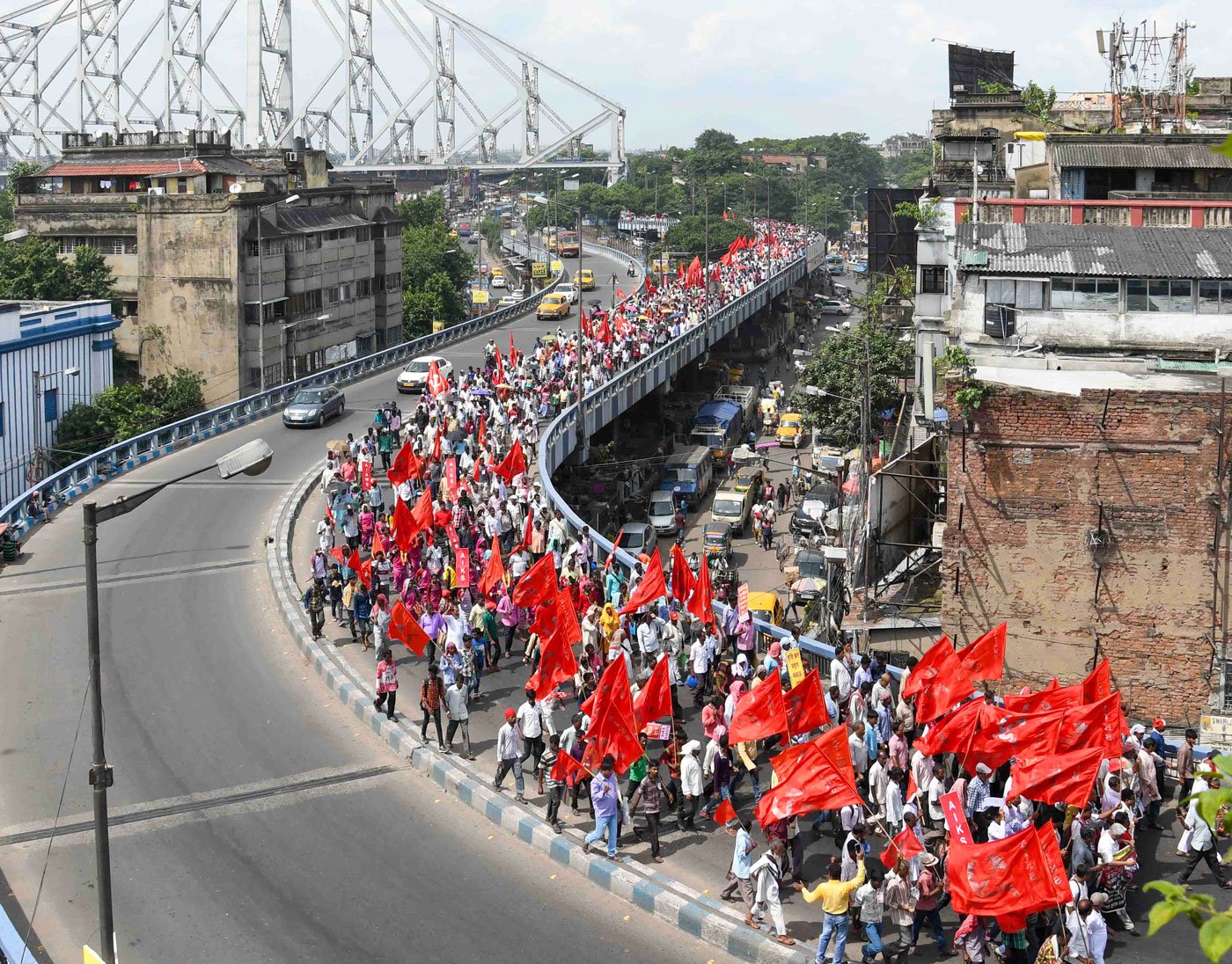 ‘Not a single potato is moving from the ground’

At a recent rally in Kolkata, there were 43 people who had seen suicides by family members due to debt and distress – most of them potato farmers hit by surplus production, falling prices, rising costs and more

Chittaranjan Ray set out from Gadang village in West Bengal for far-off Kerala in 2015, at the age of 28, seeking better wages. He worked as a mason on sites across the state, saved some money and came back to cultivate eight bighas of leased land. He had worked on the family’s farmland before, and wanted to try his luck at cultivating potatoes on his own.

“The land was being cultivated for the first time, so it demanded more hard work and higher investments,” says his uncle Uttam Ray, a farmer in his early 50s. Hopeful that with a good harvest he would earn a profit, Chittaranjan took loans from local moneylenders and the bank – over time, a total of around Rs. 5 lakhs – at “very high interest rates,” Uttam says. But then, in 2017, the land became water-logged after heavy rains.  The crop perished. Unable to face the loss, 30-year-old Chittaranjan hanged himself on July 31 that year in his house.

“His parents were eager to get him married,” adds Chintamohan Roy, a farmer from the same village in Dhupguri block of Jalpaiguri district, who cultivates potato, paddy and jute on five bighas (1 bigha is 0.33 acres). “As he was not eligible for a bank loan, his father took it on his behalf.” With his son gone, the 60-year-old father is struggling with the debt, the deceased young man’s mother is ailing.

Chintamohan too has seen a recent suicide in his family. “My brother was a simple person, he could not take the pressure and committed suicide by consuming pesticide on June 23, 2019,” he says. His brother Gangadhar was 51.

“He was cultivating potato on his own five bighas ,” adds 54-year-old Chintamohan. “He took loans [from banks, private moneylenders and even from input dealers]. With recurrent losses for the past few seasons, the situation was such that he could not control himself…”

A large portion of Gangadhar’s land is under mortgage with private moneylenders. His total debt was around Rs. 5 lakhs. His widow is a homemaker with three daughters, the eldest in college. “We brothers and Gangadhar’s in-laws are trying to pull them through somehow,” Chintamohan says. 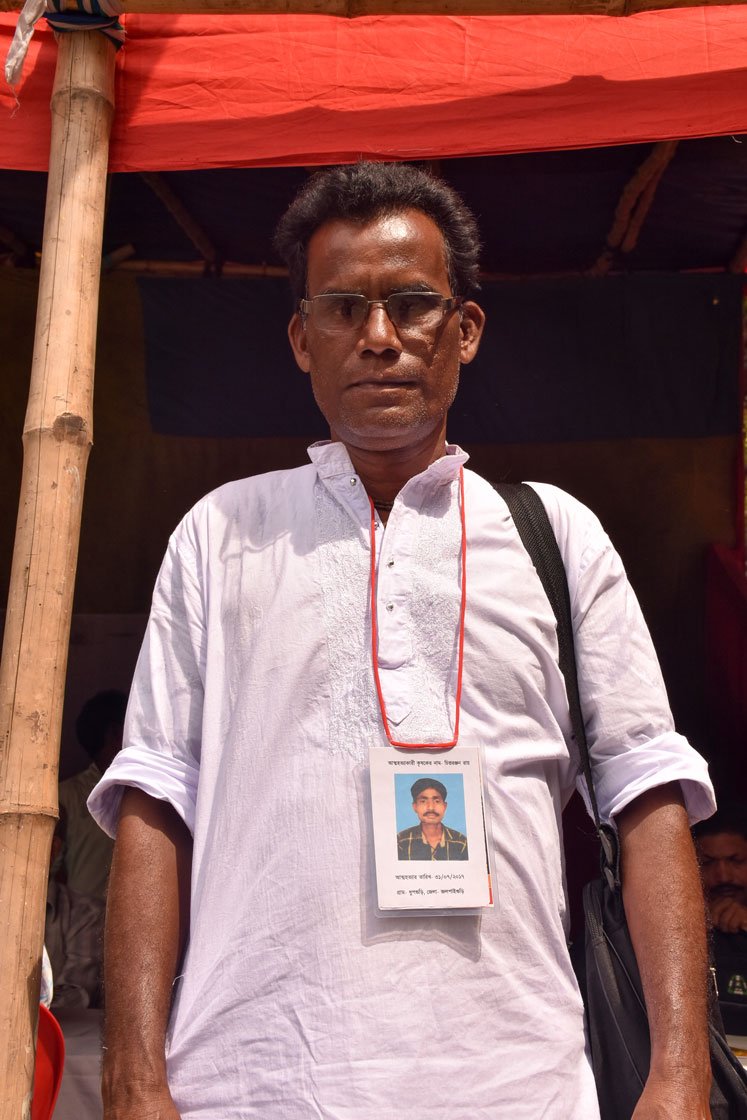 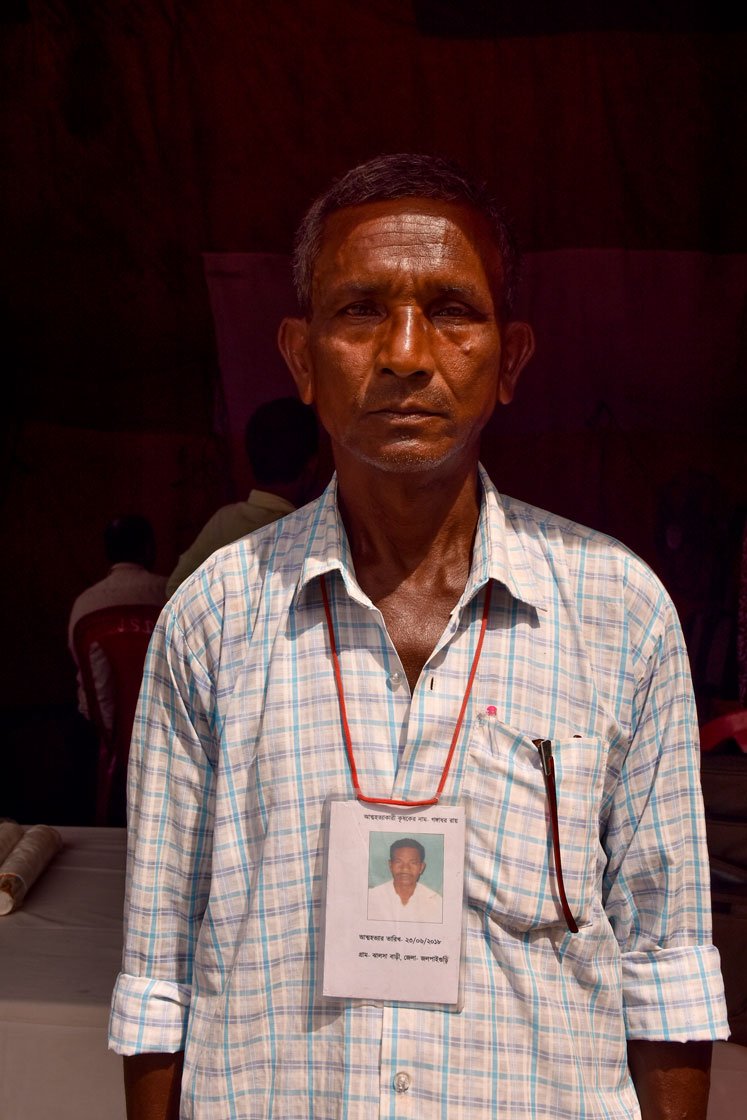 Left: Uttam Ray's nephew hanged himself in July 2017. Right: Chintamohan Roy's brother killed himself by consuming pesticide in June 2019. Both were potato farmers

I met Chintamohan and Uttam on a sweltering afternoon at a rally organised by the AIKS-AIAWU (All India Kisan Sabha-All India Agricultural Workers Union) at Rani Rashmoni Road in central Kolkata on August 31. . They were among a contingent of 43 people who had witnessed a suicide in their family due to farm distress. They came mainly from Jalpaiguri, Maldah, Purba Barddhaman, Paschim Barddhaman, Paschim Medinipur and Purba Medinipur districts. An estimated 20,000 people participated in the rally.

At a press conference two days earlier, the AIKS had said (based on its own field surveys) that there have been 217 farm suicides in West Bengal since 2011. Most of these are by potato farmers. A 2015 report in Business Standard , among others, also speaks of suicides by potato farmers in West Bengal. However, various media reports quote the chief minister, Mamata Banerjee, as saying that there are no farm suicides in West Bengal. The state stopped providing farm suicide data to the National Crime Records Bureau (NCRB) after 2011, even before the NCRB itself stopped putting out this data in 2015.

But the August 31 rally made it clear that potato farmers in West Bengal are in deep trouble – either struck by a poor harvest or, more typically, hit by a surplus in the market, along with falling prices. The state is the second largest potato producer in India, after Uttar Pradesh. Data of the Horticulture Statistics Division of the central government’s Ministry of Agriculture show that in West Bengal the five-year average  potato production (2013-14 to 2017-18) was 10.6 million tonnes – or nearly 23 per cent of the nation’s potatoes. In 2018-19, an estimated 12.78 million tonnes of potatoes will have been harvested in the state – 24.31 per cent of India’s potato production. Even after around half of this is sent to other states to be sold (and the rest is consumed within West Bengal), the production is sometimes in excess of demand.

A February 27, 2019, notice issued by the Agricultural Marketing Department of the government of West Bengal says, “Due to bumper production of potatoes in our State this year and reports of a good crop of potatoes in other potato producing states also, there is a glut in the potato market resulting in severe decrease in the farm gate prices. The current farm gate prices are reported to be lesser than even the cost of production and it is apprehended that after bulk harvesting in the month of March, farm gate prices might further decline, resulting in severe distress to the farmers.” 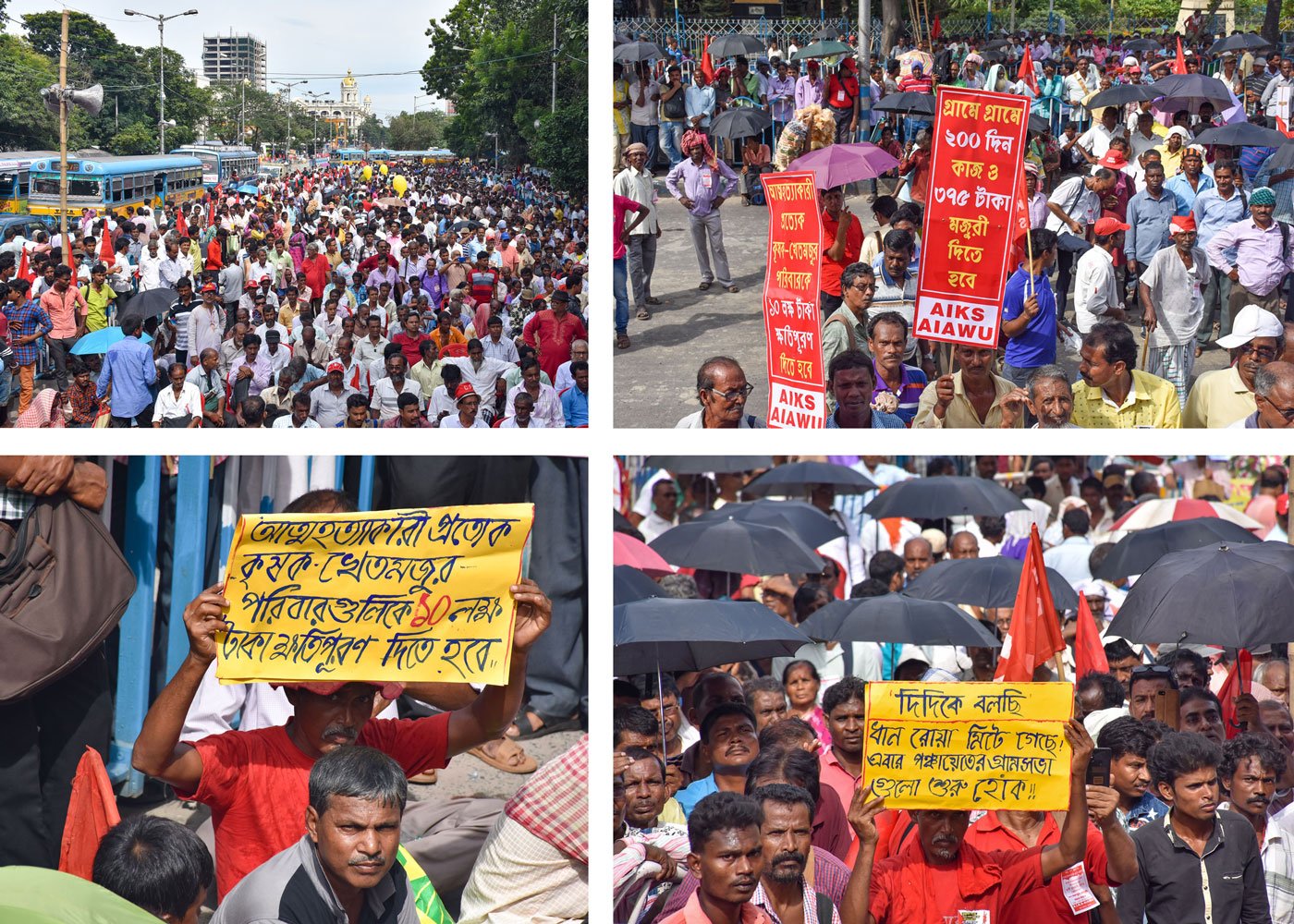 At the rally at Rani Rashmoni Road in central Kolkata on August 31, posters that state, among other demands: 'We demand 10 lakh compensation for families of farm suicide victims'; 'We demand 200 days of work in villages and Rs. 375 minimum wage'

To address this situation, the state announced, in the same notice, direct procurement of potatoes from farmers at a “declared Minimum Procurement Price” [of Rs. 550 per quintal] with effect from March 1, 2019. This, the notice says, will be the price for “ready to store potatoes from the farmers at the cold storage gate.”

However, West Bengal does not have adequate cold storage facilities for the millions of potatoes it produces.  A survey commissioned by the National Horticulture Board (under the Department of Agriculture) says that the state had (till December 2017) cold storage facilities for 5.9 million metric tons in total (for all food items). And in 2017-18, West Bengal produced 12.7 million ton potatoes.

“When the potato is harvested in the month of March, the cold-chains advertise the date and the quantity that can be stored per head,” says Chintamohan. “We have to pay in advance. When rates go higher, we sell the potatoes in the market. The rest of the potatoes rot in the field.”

In previous years too, farmers have faced similar situations, as some of the people at the Kolkata rally, still reeling from the suicide of a family member, said. “My husband [Dilip] got just Rs. 200 per sack [cost of production was estimated that year, 2015, to be Rs. 550-590 per quintal]. He had taken three acres of land on lease to cultivate potato,” says Jyotsna Mondal of Amkopa village in Garbeta-I block of Paschim Medinipur. “He also had other debts. There was constant pressure from moneylenders, the landlord, electric supply department and the bank. The day – April 4, 2015 – the moneylender insulted him, he hanged himself inside the hut where we used to store potatoes on the farm.” 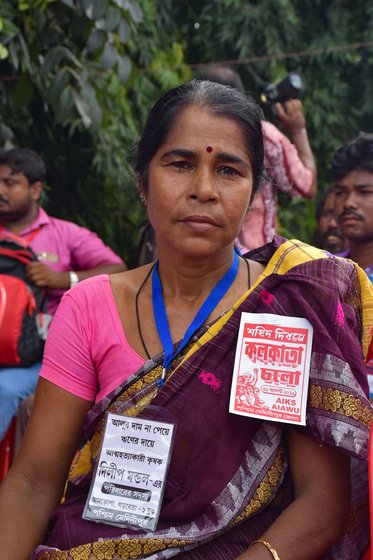 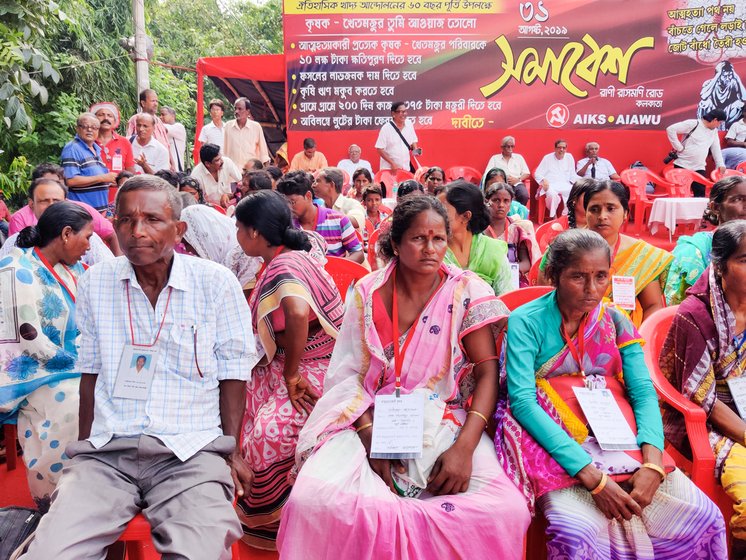 Left: In 2015, Jyotsna Mondal's husband  hanged himself inside the hut on the farm where the family stored potato. Right: Family members of farmers and farm labourers in West Bengal who have committed suicide

Seed prices too have increased, says Chintamoham. “For the last two years we are buying [potato] seeds at Rs. 50 per kilogram. Before, we used to get them at Rs. 35 per kilo. The government does not intervene in these matters, at least not in our region.”

And despite the announcement of the ‘Minimum Procurement Price’, Chintamohan says “not a single potato is moving from the ground.” He believes “this season will be no different, we will incur huge losses. Neither farmers nor traders will make any money.”

But why cultivate potato when there is a risk of overproduction? He says, “I also cultivate paddy and jute. Jute is a difficult crop, demands a lot of labour; potato is comparatively easy and resilient – once sown, with some irrigation and pesticides twice a week, the crop is ready.”

Most of the family members at the Kolkata rally spoke of these and other issues with recurring similarities – none of the deaths had been recognised as suicides related to farm distress. Nobody had received a widow's pension. Most were grappling with paperwork to prove the suicides. No one had received crop insurance.

“I have not got a single cowrie [dime] from the government, they don’t even recognise that my husband committed suicide!” says Jyotsna, “I don’t have a widow's pension. My husband’s farm loan has not been waived yet. I am repaying his loan. I had to take a loan [of Rs. 80,000] from Bandhan Bank to repay them [the lenders]. Now I am repaying 1,000 rupees every week.” She breaks down. “We have nobody anywhere. Please come and see how people like us survive. My [younger] son and I work in the fields from 8 in the morning to 3 in the afternoon for Rs. 150. How will we survive and repay these loans?”