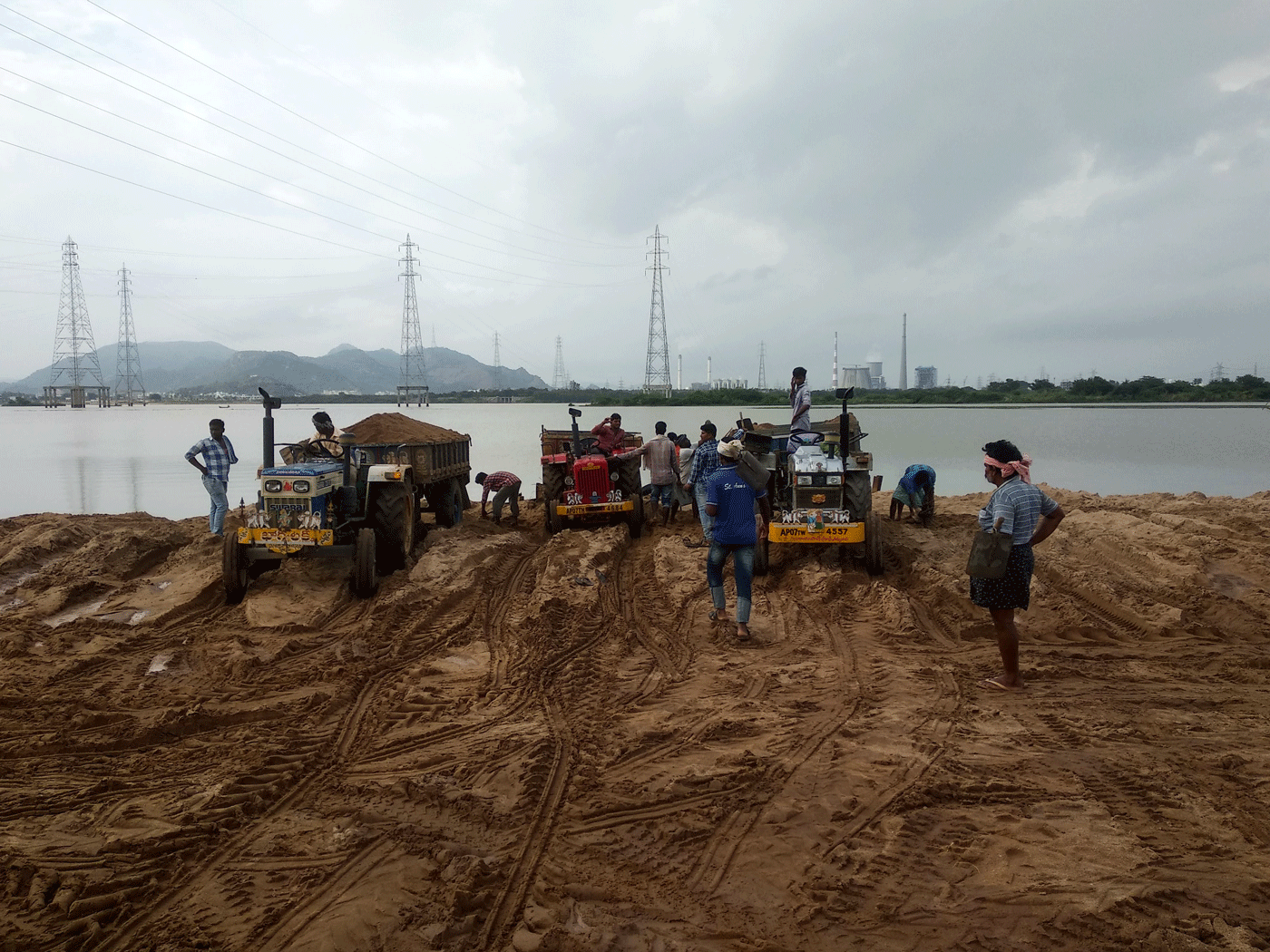 With the Andhra government's takeover of land for Amaravati, many landless villagers have lost farm work, forcing young men to seek wages at sand quarries near the Krishna river, and leaving women unemployed

"I used to earn Rs. 150 every day, six days a week. Now, there is no work for women," says Vemuri Sujatha of Uddandarayunipalem village in Thullur mandal . Sujatha, a 38-year-old widow from the Mala community, a Dalit, doesn’t own any land and worked as an agricultural labourer till January 2015.

But then work on the fields became harder to find in Guntur district after the Andhra Pradesh government started acquiring land to construct its new ‘world-class’ capital, Amaravati. With the 2014 bifurcation of the state into Andhra Pradesh and Telangana,  Hyderabad remains the capital of both states for a decade – until Amaravati emerges.

After Sujatha’s husband died in 2008, she raised her two sons alone on her meagre income as an agricultural labourer. Now they too are trying hard to earn a livelihood. Her older son, Vemuri Prasad, 19, dropped out of Thullur’s zilla parishad school in 2015, after completing Class 10. A year later, his younger brother Vemuri Raja, 17, also dropped out of the same school. Both now work as daily-wage labourers at a sand quarry on the bank of the Krishna river and earn Rs.200-250 a day three days a week each – rotating days because of the limited work available.

"It is back-breaking work that requires large amounts of energy. We go early in the morning at 6 a.m. and come back only by 6 p.m.," says Raja. Since women are not employed at the quarry – and they can’t now find agricultural work in the village – many, like Sujatha, find themselves confined to their homes. 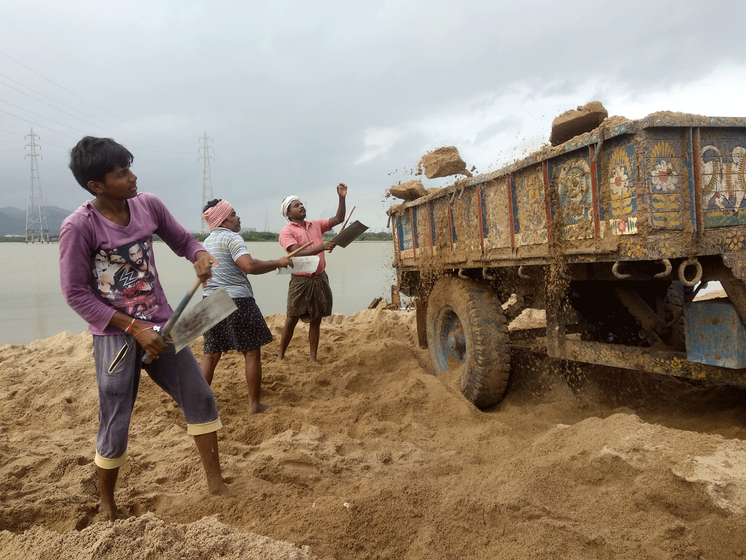 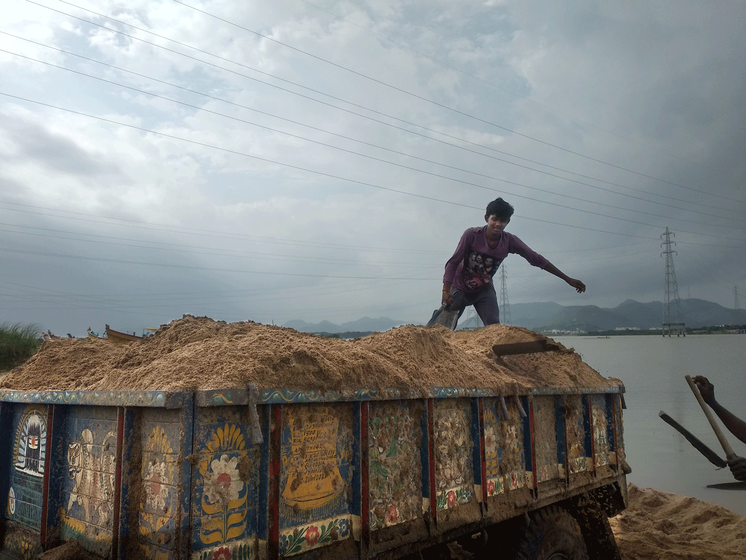 Vemuri Sujatha. a Dalit widow, can no longer find work as an agricultural labourer. Her sons Vemuri Raja (above) and Vemuri Prasad now work at the sand quarries, rotating days because of the limited work available

Uddandarayunipalem is one of the 29 villages on the north bank of the Krishna river where the state is acquiring land for the construction of Amaravati. In phase one of the project, the state will acquire 33,000 acres (and a total of 100,000 acres by phase three in 2050). Under the Land Pooling Scheme (LPS), started in 2015 for the Amaravati Sustainable Capital City Development Project, landowners can “voluntarily” give up their lands and receive a “reconstituted developed” plot once the city is built, instead of financial compensation. The ‘pooling authority’, the Andhra Pradesh Capital Region Development Authority (APCRDA),  retains the rest of the land and will use it for roads, public buildings, industries and other civic amenities. But the LPS only takes the consent of landowners and excludes others dependent on the land, such as agricultural labourers.

With a population of 1,503, Uddandarayunipalem is divided into three main colonies: the main village, the Scheduled Caste (SC) colony next to it, and the Lanka Scheduled Caste colony by the riverbank. Around 150 Dalit families live in the SC colony and 75 in the Lanka SC colony, the villagers estimate.

Mostly dominant caste Kamma landowners and marginal farmers live in the main village. The majority of Dalits here are tenant farmers and agricultural labourers who depend on the landowners for work. Census 2011 lists  169 farmers and 556 agricultural labourers living in Uddandarayunipalem. Very few Dalits owned land before it was distributed to the landless poor by the state under the Andhra Pradesh Land Reforms (Ceilings on Agricultural holdings) Act, 1973.

“When the landowners gave away their lands for pooling and stopped cultivation, the agricultural labourers lost work," says 70-year-old Mandla Subba Rao. It was around this time that sand mining increased on the banks of the Krishna, in the villages of Uddandarayunipalem, Borupalem, Lingayapalem and Venkatapalem. Sand mined from the river is being used for the capital’s construction. 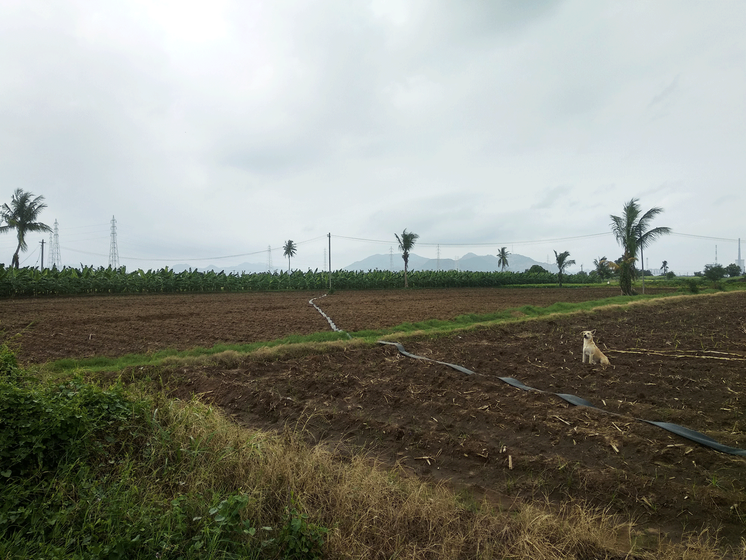 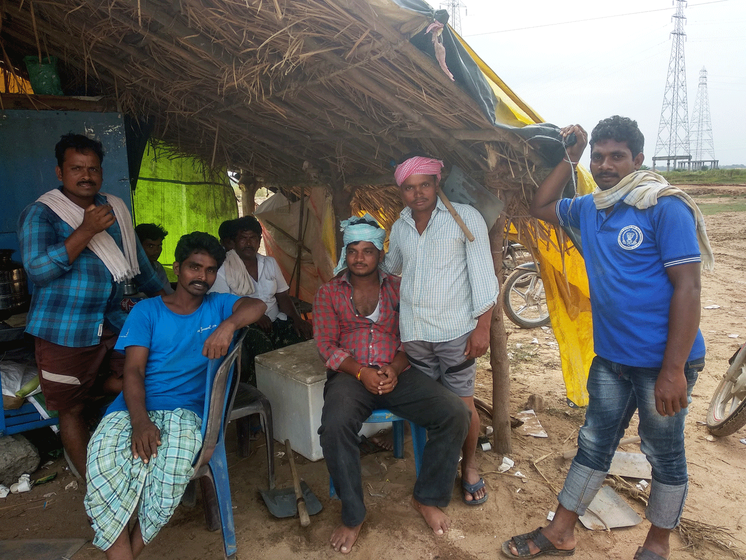 'When the landowners gave away their lands for pooling and stopped cultivation, the agricultural labourers lost work', says Mandla Subba Rao. Right: Young workers from Uddandarayunipalem waiting for work at the sand banks

The young men from these villages now depend on sand mining, but the older ones have no work. “I tried going to do the mining work for a few days, but it is very hard. I can't do it because of my age," says Subba Rao, who lives with his wife, 60-year-old  Venkayamma Mandla. Their only source of income now is a monthly pension of Rs. 2,500 that the government has promised landless families for 10 years as part of the Land Pooling Scheme – much less than the Rs. 8476 that a World Bank inspection panel report of September 2017 says has been the average monthly income of landless labourers here.

"Men used to earn Rs. 500 per day, women got Rs. 150-200, and work was available on all 365 days of the year. A landless agricultural labourer’s family would earn Rs. 15,000-20,000 a month if the husband and wife both worked,” says Venkayamma. “How can we cover our daily costs with Rs. 2,500? A 25 kilo bag of rice that lasts a month costs Rs. 1,500,” Subba Rao adds. “With the [new] capital, other costs such as transport [with people travelling further for work] and health have only increased, while income has decreased.”

"At first, the government didn't give us anything. All the packages were only for the landowners. The government gave us these peanuts [Rs. 2500] after we protested. We demand a pension of at least Rs. 10,000 per family per month," says Kambhampati Bhoolakshmi, 42, a Dalit widow from the SC colony. "They don't give the pension on time either. We get the money once in two months. I had to go twice or thrice to the SBI bank in Mandadam [four kilometres away] every month and I spent Rs. 40 to go to and from [by autorickshaw, since there is no bus service]," she adds.

The government also promised 365 days of MGNREGA work in the 29 villages, but that has still not begun. "Forget about the 365 days, we didn't have MGNREGA work for a single day in the last four years, ever since land pooling for Amaravati began [in 2015]," says Bhoolakshmi. 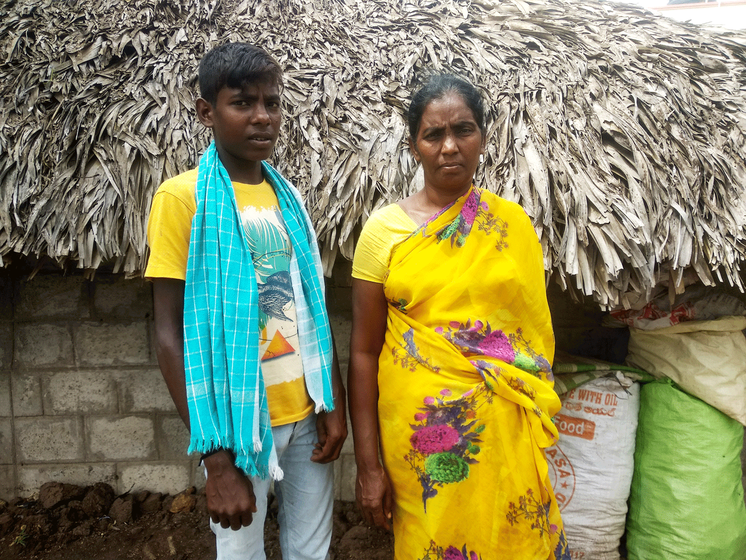 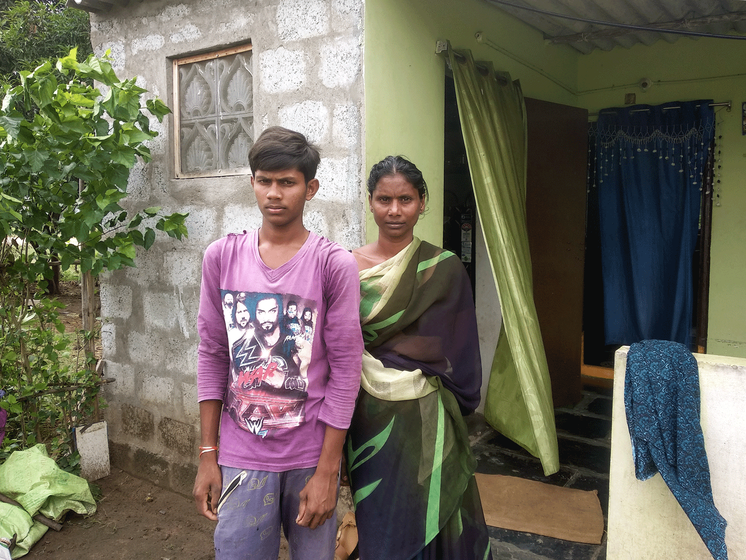 Left: 18-year-old Irimiya's earnigns are now sustaining his mother Bhoolakshmi and the rest of their family. Right: Vemuri Sujatha and her son Vemuri Raja in front of their house in Uddandarayunipalem

Her 18-year-old son Irimiya’s earnings are now sustaining their family of five, which includes his sister and her two children. He dropped out of Class 10 in 2015 and earns Rs. 200-250 a day three days a week. "Since there is less work and there are more people, we share the work. One day, the men from SC Colony go to do the sand mining work and the next day, the men from Lanka SC Colony go," says Irimiya.

On a cloudy afternoon, young Dalit men working at a sand quarry (some even with MBA degrees) are immersed in a game of cards. They tried to find work in Hyderabad and other cities with little success. Back home in their villages, there’s no agricultural work for them either. "The sand mining work is also decreasing year by year. After all, the sand on the riverbed has to get over," says Ankala Madan, 23, who did his MBA from an institute in Eluru.

The sand is dug out of the riverbed using dredges and mechanised boats and then deposited on the river bank. Puli Sudheer, 24, who also works at the quarry and has an MBA from Guntur, says, "We load the sand on to the tractors. We did MBAs but ended up doing this work." Sudheer's cousin Bharat Kumar, 25, who too has an MBA, is angry: "We voted for Chandrababu Naidu because he promised one job per family. We didn't know that the offer was valid for only his family," he says, referring to Nara Lokesh, the chief minister’s son, who was made a minister in the state cabinet in2017.

The Andhra Pradesh high court and the National Green Tribunal have passed several judgments preventing mechanized sand mining, but the government has ignored these strictures. "In fact, many people from the ruling Telugu Desam Party (TDP), including the local MLA, MP and a couple of ministers, are involved in sand mining," says a young Dalit labourer at the quarry, who too has an MBA and didn’t want to be named. "They will  spend the money [they make from the mines] to win the elections next year without catering to our needs." 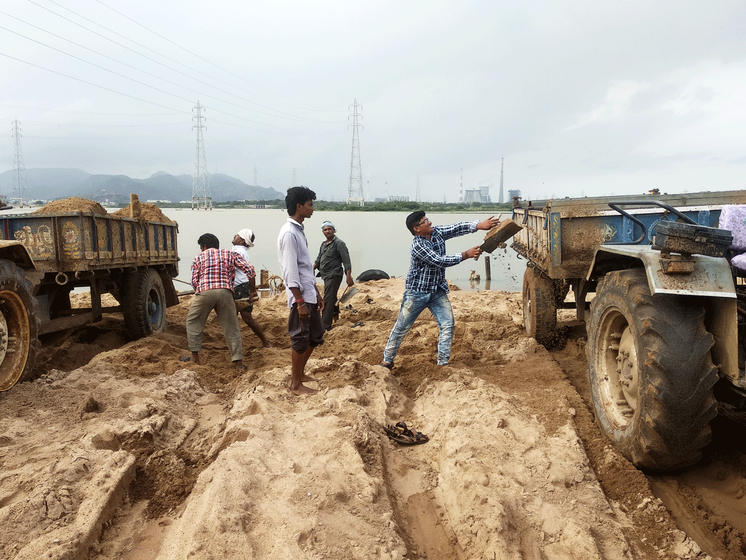 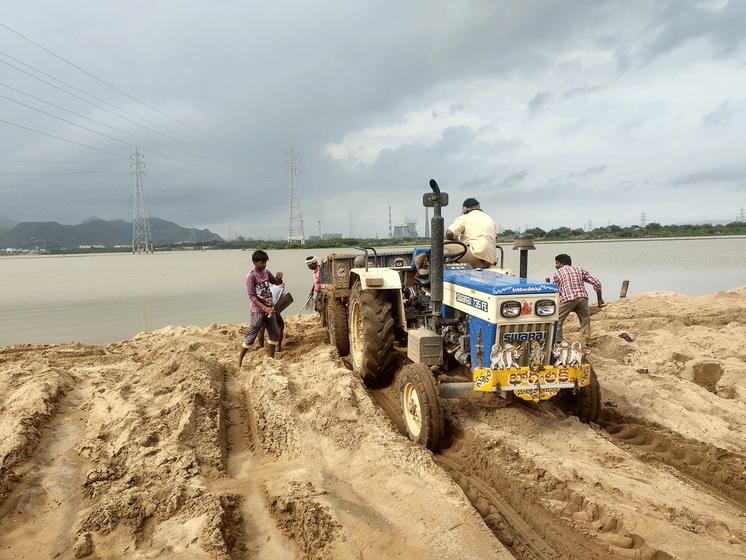 In March 2017 three Dalit families from Uddandarayunipalem pooled Rs. 12 lakhs, part of it loans taken from banks,  and bought a dredger so they could mine sand themselves. But the dominant Kamma caste sarpanch , a member of the TDP, didn’t allow them to mine the sand, so they work for a Kamma contractor, who too is a TDP member. “If we mine the sand, it is illegal. But if we work for people in the ruling party, the same mining becomes legal…and this is justified on the pretext that it is giving us a livelihood," says the young Dalit.

Over time, sand mining on the Krishna’s banks and its riverbed has caused significant ecological damage. Vikram Soni, emeritus professor at Jawaharlal Nehru University and Jamia Millia Islamia, New Delhi, who has studied this closely, says, “Sand is very useful to hold water in the river. It is important for rivers to have sufficient sand to maintain the ecological balance. The total depth of sand [in the Krishna] varies from 30 metres on the riverbed to five metres in the outlying areas, and this is unusual. The entire natural river system, existing for millions of years, has been ruined by politicians for the sake of money."

Neither the young MBAs nor Raja, Prasad and Irimiya, the children of the sand mining labourers, know where they are headed. "Let the government give us the jobs it has promised and stop the sand mining to save the river," says Madan.

"We don't know what we will do," adds Raja, “and how we will live once the sand is depleted."