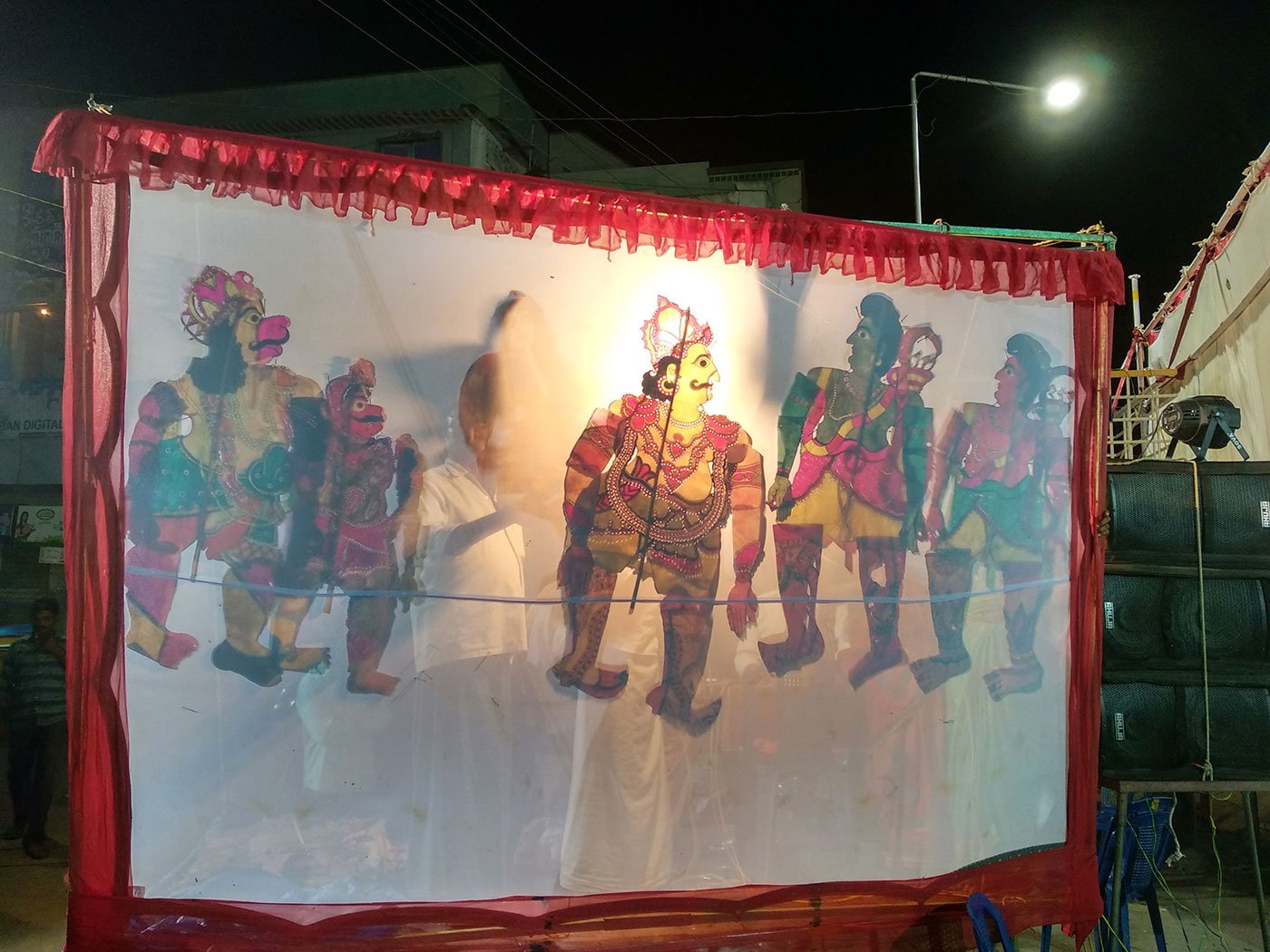 Pulling the last of the strings

“I have performed only five shows in the last year,” says Rekhanara Kotilingam, the lead male artist and founder of the ‘Sri Prasannanjaneya Brundham’ troupe of puppeteers.

With over 2,500 shows to his credit, 48-year-old Kotilingam is a seasoned performer who began his career when he was 12. He sang songs and played the mridangam in the troupe run by his father, Balaji, before starting his own group 25 years ago.

“I learnt the art from my father, who learnt it from his father,” says Rekhanara Hanumantha Rao, Kotilingam’s 60-year-old brother, who is also part of the troupe. “We would mount the equipment [drums, harmonium, stage props] and daily necessities like utensils and clothes onto a bullock cart and move from one village to another to perform puppet shows.”

But now the artists are only occasionally invited to perform in cultural spaces like the Ravindra Bharati in Hyderabad, Madras University in Chennai and at the Brahmotsavam festival in Tirupati. 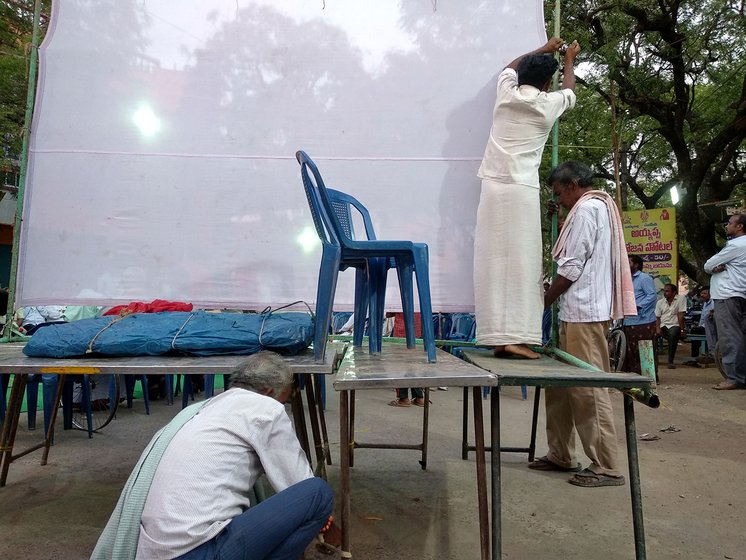 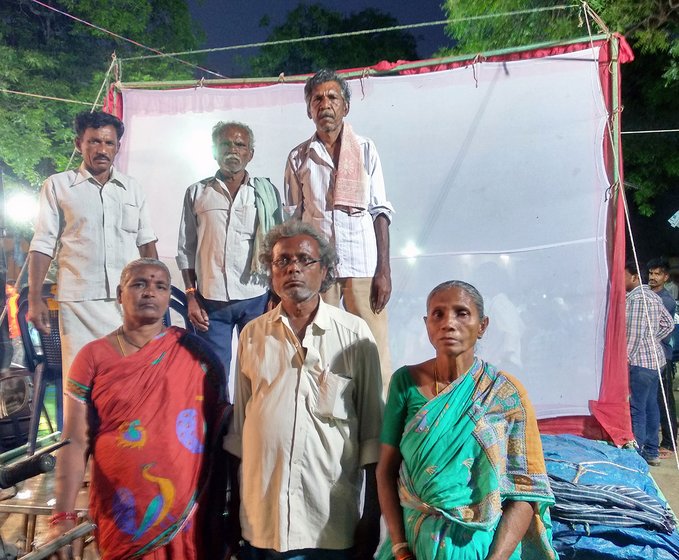 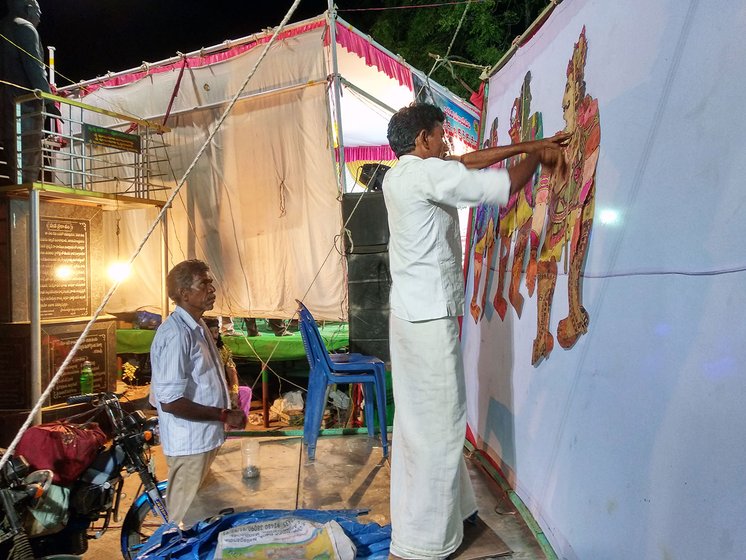 On March 10, 2018, they performed the play ‘Rama Ravana Yuddham’ in Addanki town. They were invited as part of the 20th anniversary events of the Addanki Kala Peetham, an organisation that promotes folk arts in Prakasam district. The play, about the war between Rama and Ravana, is depicted as a fight between good and evil. It was scheduled at the end of the programme, which forced the artists to cut short the two-hour play to an hour. Despite the late hour – 11 at night – both men and women stayed back. Manikyala Rao, 74, who was in the audience, yawned and said, with a beedi in his hand, “It’s been long since I watched a puppet show. That’s the reason why I am staying on despite it getting late.”

Kotilingam’s 10-member troupe is one of just a handful of surviving puppeteer groups in Andhra Pradesh. The member-artists, all from the Aryakshatriya community that originated in Maharashtra, are Kotilingam’s relatives. They live in different parts of Guntur and Prakasam districts of southern coastal Andhra, mostly working as hawkers or labourers in small towns like Addanki, Darsi and Ongole. They meet as a group only when hired for a performance – once every three or four months.

Linking their ancestral art form to the Maratha kingdom of Chhatrapati Shivaji, the female lead of the troupe, Vanaparthi Ramanjuneyamma, 45, says that Serfoji and Venkoji, Shivaji’s brothers, came to the Madurai-Thanjavur region in the 17th century and promoted various art forms, including puppetry, by the Aryakshatriya community.

Kotilingam and Ramanjuneyamma then take turns to narrate this origin story: “Once upon a time, a Brahman in the court of a Chola king hated the Kamsalu [caste; now listed as Kamsali in Andhra] and concocted a story to make the king believe that the Kamsalu were plotting against him. The king ordered a brutal beheading of the Kamsalu. The few who survived lost their livelihood and fled to the forests. There, they started making toys with the dead skin of animals, developed this folk art and started performing for the people as a means of livelihood. Intrigued, people from other castes learnt the art too. Performing Ramayana over six months, they started digging a tunnel from the stage to the palace to kill the Brahman and the king as revenge. They killed both on the last day of the performance when Rama kills Ravana and left the art form to the people who had learnt it out of interest. Over time, this set of people who performed the art came to be known as the Aryakshatriya.”

'The performances used to stretch across days and months. But we confine ourselves to evening shows now', says Ramanjuneyamma

Watch video: Not quite the last act – yet

The story mirrors how the community was persecuted under the ‘Criminal Tribes Act’ of 1871. Enacted by the colonial authorities, the law branded some tribes as inherently ‘criminal’ and claimed that their activities, including public performances, were a cover for illegal dealings. In 1952, the government of India repealed the Act and decriminalised their public performances; the Aryakshatriyas are now listed as a backward caste.

Given the caste-based origins of the art form, and, traditionally, subaltern target audience, the plays (in Telugu) introduce anti-Brahminical perspectives into stories drawn from mythologies and Hindu epics like the Ramayana and Mahabharata. Each play features 7 to 10 puppets, made from goat skin by the performers themselves, which are replaced as they wear out. “We have performed plays like Sundarakanda, Mahi Ravana Charithra, Lakshmana Moorcha, Indrajithuni Vadha, Kumbakarnudi Vadha, Padmavyuham, Virataparvam, Keechaka Vadha and many others,” says Kotilingam.

Sundarakanda , which Kotilingam performs most often, is his favourite because it has won him the most acclaim. It is based on the Ramayana , but the puppeteers narrate the story from Ravana’s perspective, making him the hero of the story. 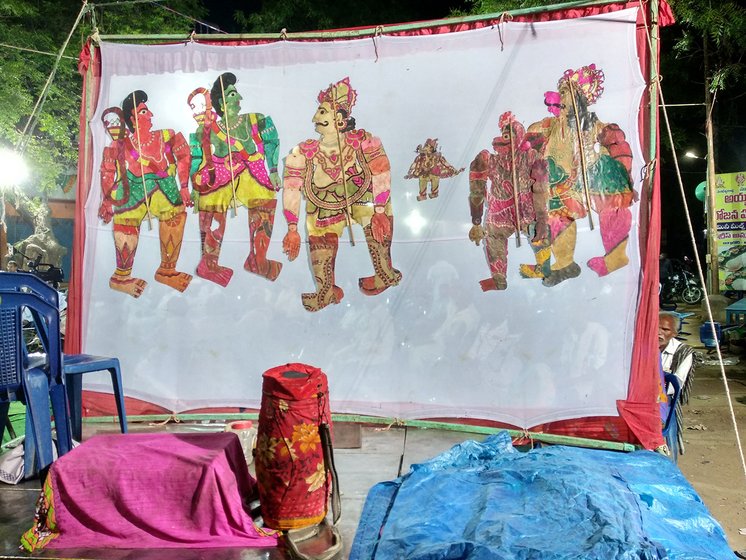 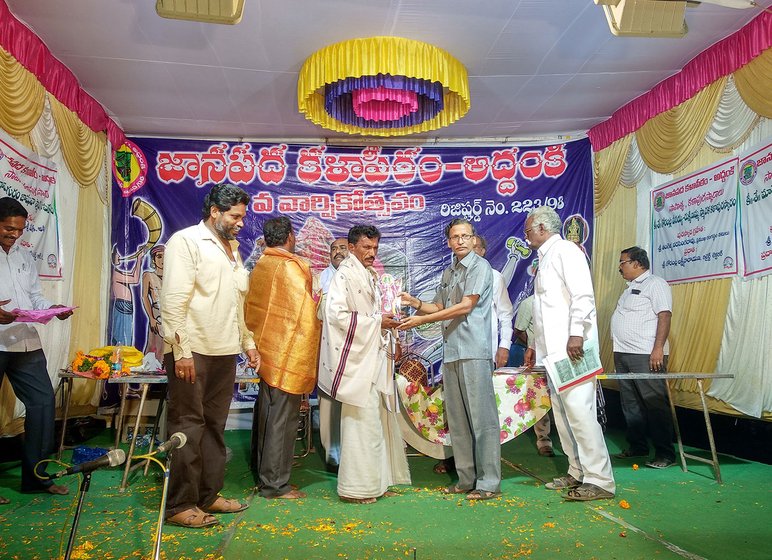 “The performances used to stretch across days and months. It takes six months to complete the Ramayana from start to end. But we no longer perform such long plays and confine ourselves to evening shows due to the changes in the spaces we perform in as well as the people we perform for,” says Ramanjuneyamma. The group is now paid between Rs. 10,000 and Rs. 30,000 for 2 to 4 hour shows, depending on the venue

Balaji’s troupe, in which both Kotilingam and Hanumantha Rao first trained to be puppeteers, catered to 1,000 villages in Prakasam and Guntur districts. The group would stay and perform for a month or two in each village under the mirasi system that is similar, conceptually, to Brahmin agraharas. Each troupe was given an exclusive ‘right to perform’ in a specific cluster of villages – their mirasi or inheritance – and their performances were confined to these villages.

“This is the only property we ever had. The sons [but not daughters] divided the mirasi villages among themselves and started a troupe of their own. All of our needs [food, shelter, clothing] were taken care of, royally, by the villagers, apart from the paddy and money we received for performing,” says Kotilingam. He is now a street vendor, selling umbrellas and other small items in his hometown, Addanki, when he is not performing – which is most of the year. Hanumantha Rao does not work beyond the stage, and Ramanjuneyamma is a domestic worker in Darsi in Prakasam district.

“It was mostly women who came to watch the puppet shows. Then they got confined to their houses, watching serials, when the television set became an everyday house item,” says Jyothi Chandramouli, a retired Telugu teacher and a cultural activist, based in Addanki, who has been working with folk artists for 35 years. 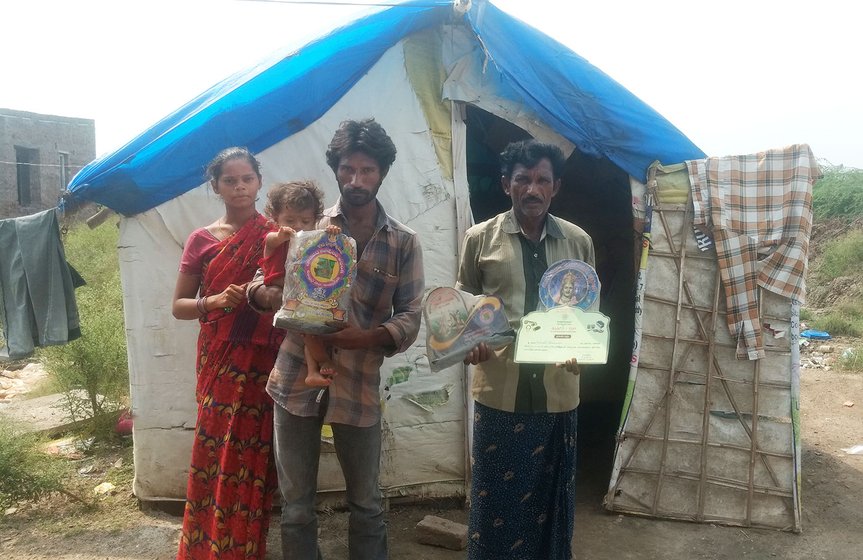 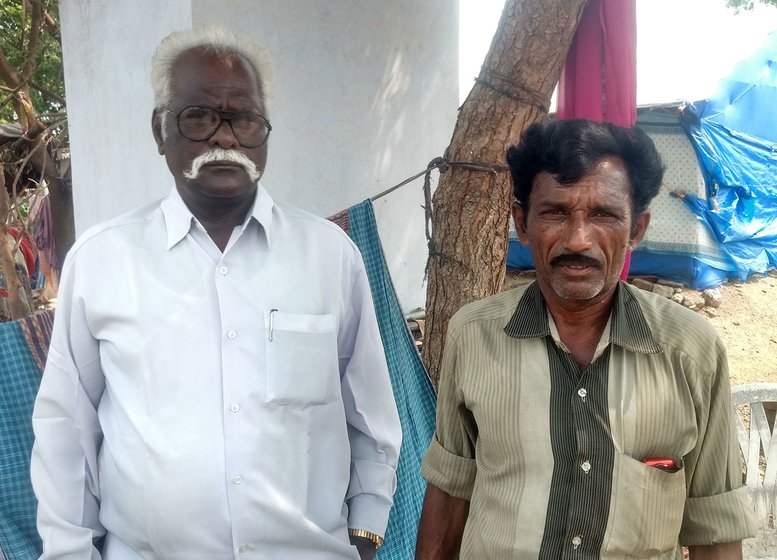 Left: Kotilingam with the troupe's mementos outside his home. Right: Cultural activist Jyothi Chandramouli has worked with the artists for years

This is one of the factors that forced the puppeteers to seek work in the informal ‘unskilled’ job sector. None of Kotilingam’s four children have learnt the art of puppetry, opting instead to work as daily wage labourers in the construction or manufacturing industry in and around Addanki. Hanumantha Rao and Ramanjuneyamma’s children have also not learnt puppetry.

“There were six puppet troupes and 15 troupes [in Prakasam district] that performed street plays around 10 years ago. You will hardly find any now. Some other art forms like Nemali Aata [Peacock Game] and Bhutta Bommalu [Toys in the Basket] have already become extinct,” says Chandramouli. Echoing his concerns, Kotilingam says, “This will be the last generation of puppet artists. Ten years from now, you will only read about us in books and see the pictures of our performances. Nothing will be left to watch live.”

“Back in the day, the people would sustain the folk arts in the villages,” adds Hanumantha Rao. “Now, the government hardly cares about us. We asked them to encourage such performances near religious shrines and schools, but they never cared.”  The artists have not received any state aid, grants, pensions, identity cards – nothing. “Five to six shows per month will fill our stomach and sustain the art,” he says, still hoping that his legacy will not vanish with him.
Rahul Maganti