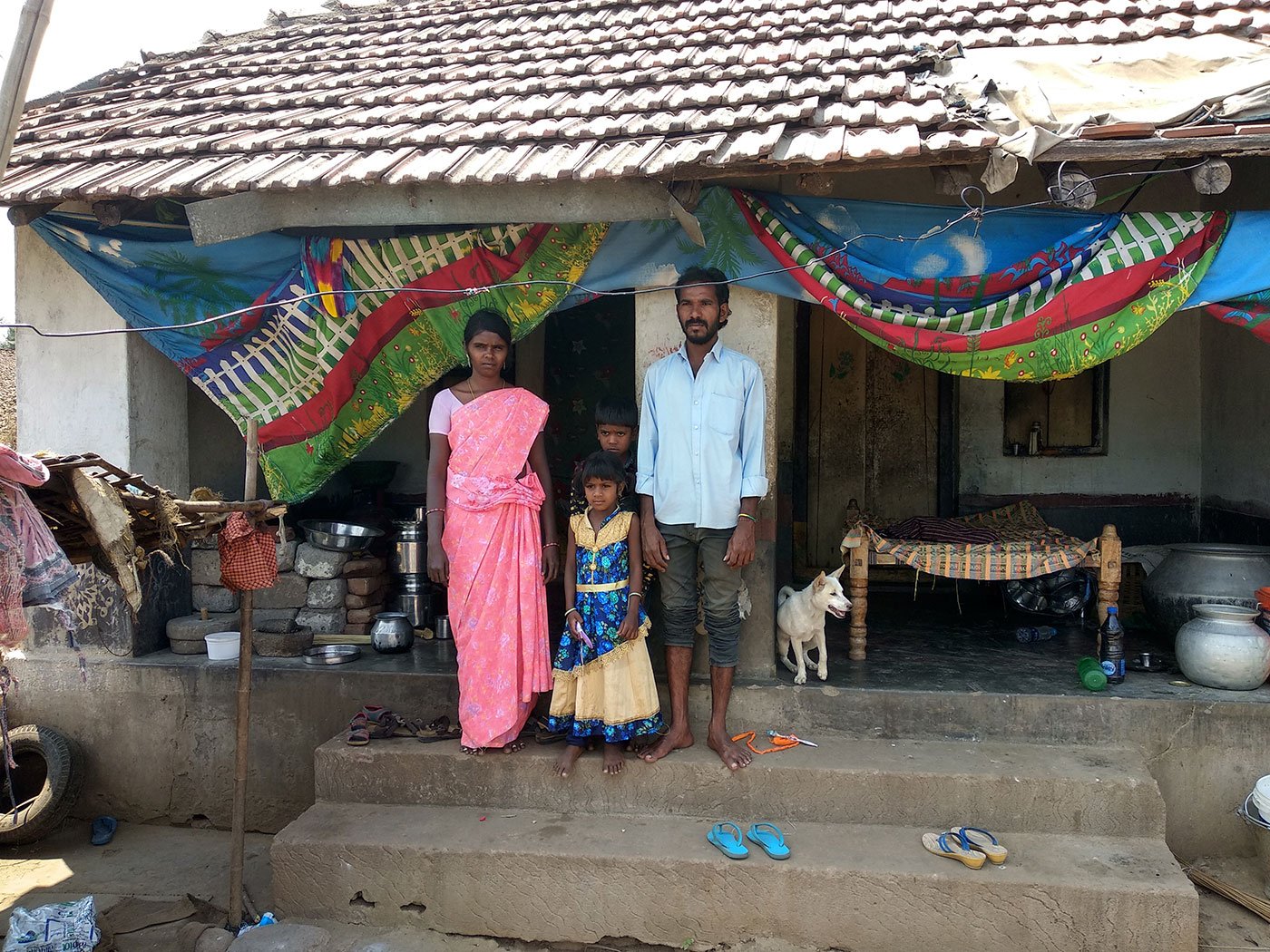 Pydipaka families: and then there were ten

Hundreds of villages will vanish over time due to the Polavaram project on the Godavari. In Pydipaka, ten families are refusing to move, demanding from the state at least the legally mandated resettlement package

“I pray for the night to get over soon. Hardly anyone lives in this village now, so snakes keep moving around,” says Kavala Sridevi. She and her family have been spending the nights in near-total darkness after the government cut the electricity connections in her village in May 2016.

Sridevi’s family is one of only 10 who have stayed back in Pydipaka village in Polavaram mandal of West Godavari district, right next to the Godavari river. Around 429 other families were forced to move from here in June 2016 when the government acquired their land for an irrigation project. Part of a huge scheme called Jalayagnam, the project was inaugurated in 2004 and was scheduled to be completed in 2018, though only around 60 per cent is constructed at present.

“A month after cutting the power connections, they cut off the drinking water too,” says Sridevi, who now gets a 20-litre water can for Rs. 20 from Polavaram town, eight kilometres away, travelling with her husband Suryachandram in his autorickshaw.

For a while, the couple and their three children ( see the cover image on the top ) also shifted to a resettlement colony in Hukumpeta in Gopalpuram mandal , along with the many other families who moved out. But after around a month, they returned to Pydipaka. “We believed the officials, but came back after losing hope that the government is going to act on its promises," Sridevi says, fighting back tears. 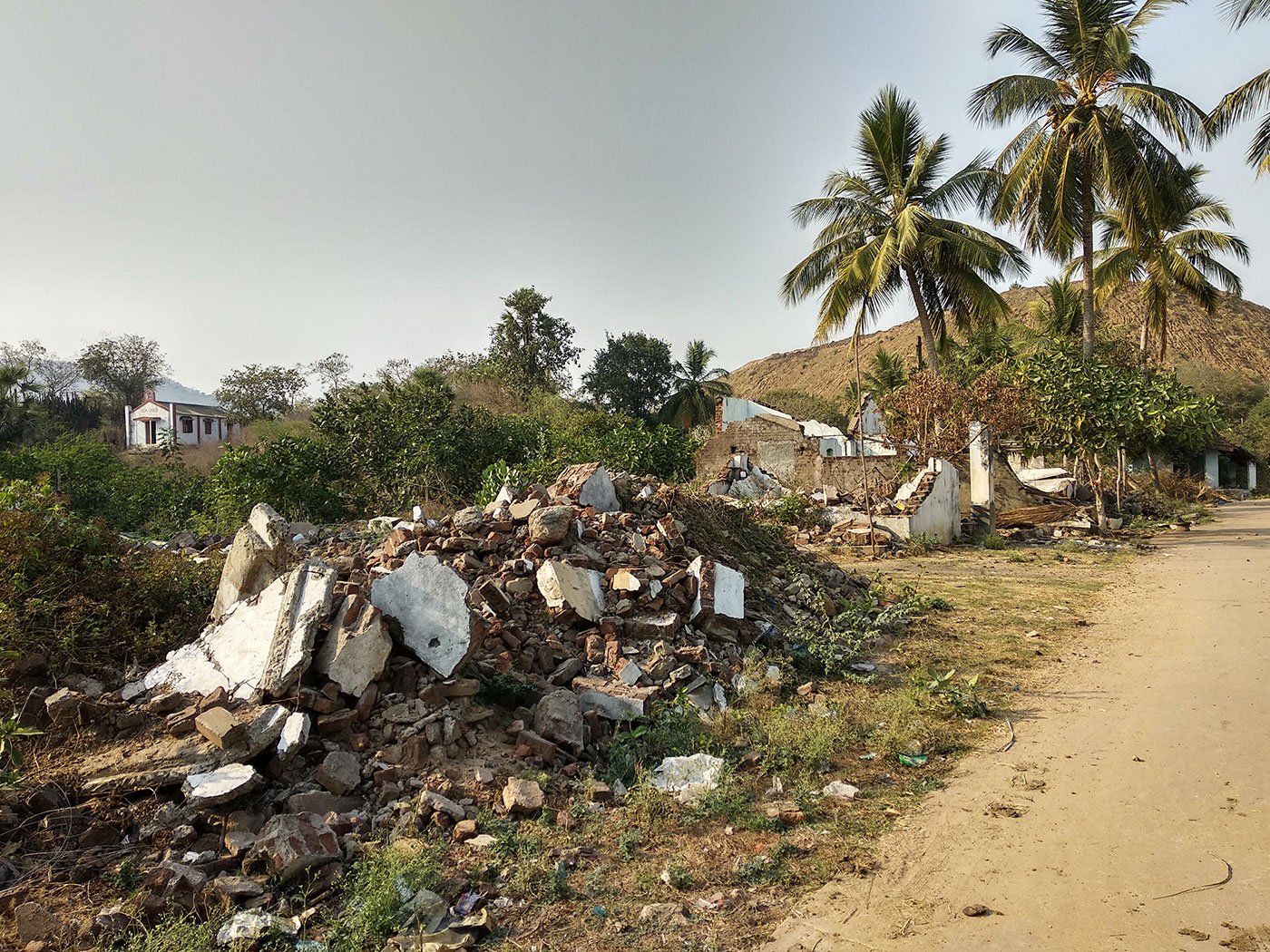 Most of Pydipaka's families were forced to move to inadequate resettlement colonies in 2016; their own houses were demolished so that they would not return

All the families were shifted to four colonies – one each in Polavaram and Hukumpeta villages and two in Jangareddigudem mandal , between 10 to 65 kilometres from Pydipaka. They were given many assurances by the government – that they will get an equal amount of land as what they owned in Pydipaka, up to two acres for families who didn’t own any land, a job per family, a pucca house, a one-time settlement package of Rs. 6.8 lakhs, and compensation for family-owned structures, trees and livestock. These measures, among others, are specified in the Land Acquisition Resettlement and Rehabilitation (LARR) Act, 2013. But, the villagers say, the government has not fulfilled any of its promises even two years later ( More on this in the next story in this series ).

Sridevi and Suryachandram are Dalits; they don’t own any land and worked as agricultural labourers in Pydipaka, earning between Rs. 100-300 as daily wages. “I have no work now and my husband earns 300 rupees a day driving an autorickshaw in  Polavaram town to earn for the family,” says Sridevi. He bought the rickshaw for Rs. 1 lakh, after taking a loan from private moneylenders at an interest rate of 36 per cent.

Their three children Smiley, 6, Prashanth, 8, and Bharath, 10, are playing with Snoopy, the family’s pet dog, unmindful of how the Polavaram project will alter their lives, when I visit their house one afternoon. “I had a lot of friends a couple of years ago,” Bharath says. “All of them went to a new colony.”  He and his siblings are the only kids remaining in the village now. They discontinued school two years ago when it was closed and demolished by the project authorities; their parents cannot afford to send them to school in Polavaram town.

Most of the houses in the village have also been demolished, which makes it difficult for families to return after they realise that the resettlement colonies are not at all what they imagined. Sridevi's house escaped by sheer luck, since it is located in the Dalit basti at a far end of the village. 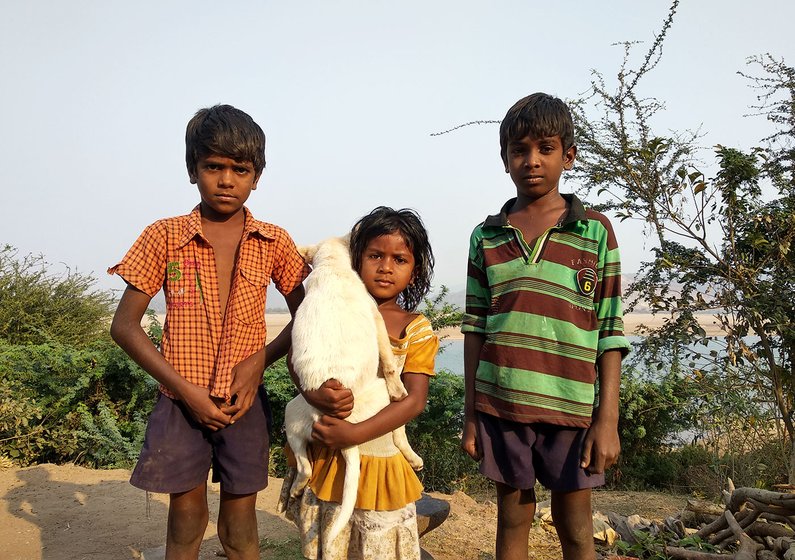 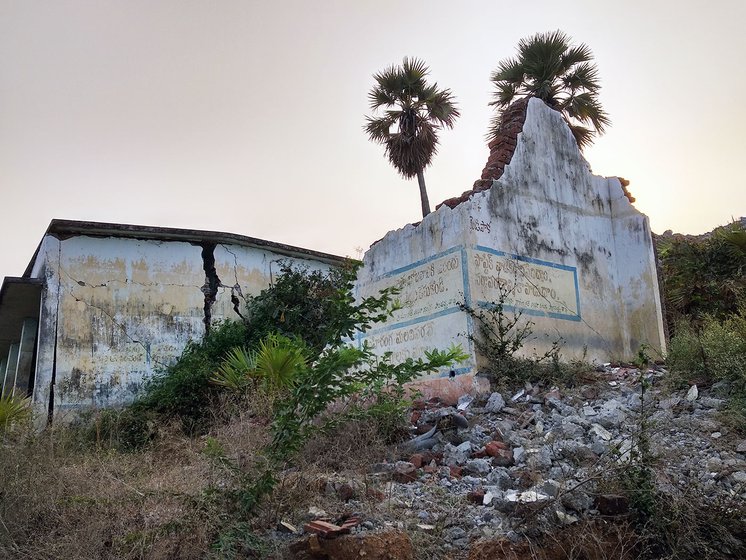 Prashanth, Smiley and Bharath with their dog Snoopy. They stopped going to school when the project authorities demolished the school building (right) in 2016

Pydipaka is one of seven villages – with a total population of around 5,500 – located right next to the project site, from where residents were forced to move in 2016. The project authorities wanted this land for construction activities. People in 22 more villages and hamlets upstream – with a total population of around 15,000 – on the northwest Godavari river bank in Polavaram mandal will also eventually be displaced and their houses submerged.

The Polavaram project, known officially as the Indira Sagar Multipurpose Project, is expected to irrigate 3 lakh hectares and generate 960 MW of power, in addition to providing water for industries and drinking water to 540 villages. These numbers are from the Environmental Impact Assessment Report of the Ministry of Environment, though they vary in the state’s own Government Order 93 of May 2005, and the chief minister’s statement at an all-party meeting in Hyderabad in December 2005.

Once the full Polavaram project is constructed, at least 462 villages on the banks of the Godavari, spread across nine mandal s in Andhra Pradesh, will vanish. The villages are home to the Koya and Kondareddi Adivasi communities, and come under the Fifth Schedule of the Constitution, which gives areas with a predominantly tribal population special rights to safeguard their land, forests and culture.

More than 300,000 people — including 1.5 lakh Adivasis and 50,000 Dalits — will be displaced from 10,000 acres of forestland and 121,975 acres of non-forest land, according to documents obtained by me under the Right to Information (RTI) Act from the Ministry of Environment. Another 75,000 acres of land is being acquired for canals, distributaries, townships and a ‘green belt’. 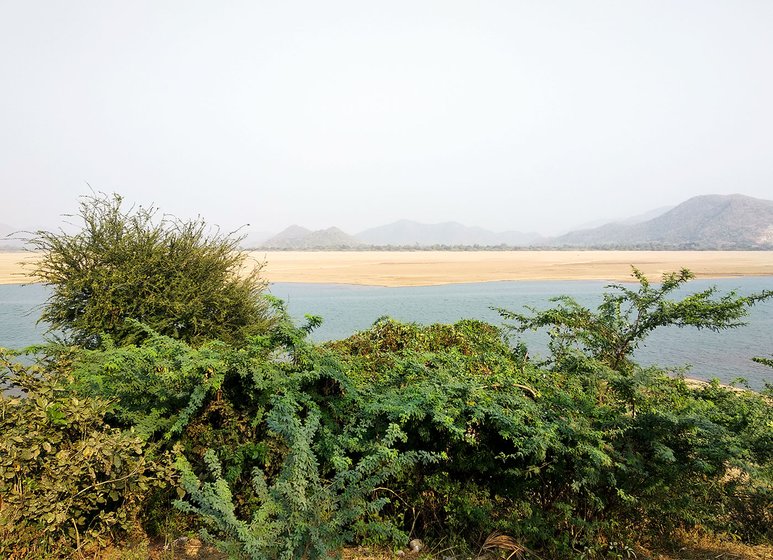 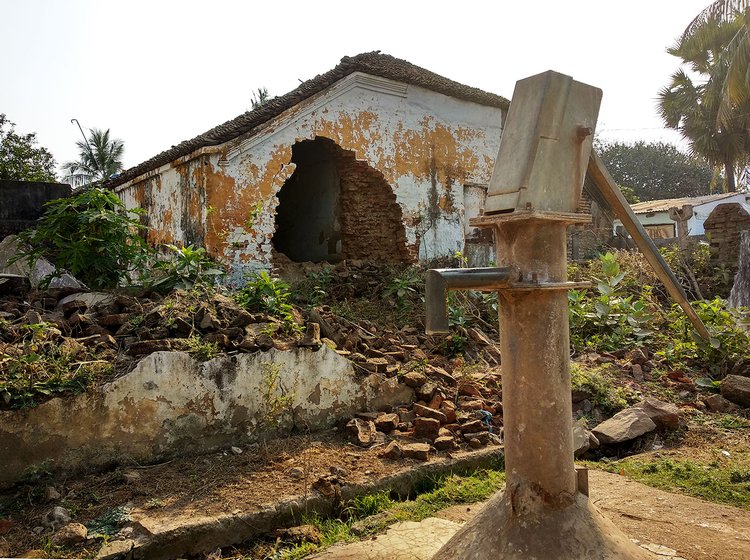 The Godavari flows right in front of Kavala Sridevi’s house in the Dalit basti , which escaped demolition unlike most other houses in Pydipaka (right)

Despite the scale of displacement, the LARR Act is not being implemented, villagers say. So 10 families, including Sridevi’s, have refused to move from Pydipaka. She also wants the Act’s special provision – that Dalits should be given land if they are being forced out – to be applied.

Though only a few families have stayed back and continue to fight, many of the others who moved also protested strongly. The state’s revenue and the police departments, the villagers say, exerted severe pressure on the protesting families. Besides cutting off the electricity and drinking water, during the 2016 monsoon, officials allegedly asked labourers to dump mud and sand on the road to Pydipaka – creating a marshy road that blocked access to the village. “We had to cross a knee-deep puddle to go out or come into the village,” says Sridevi.

Botta Trimurthulu, 42, another protesting villager who has stayed back in Pydipaka, says he faced severe harassment. On June 30, 2016, the project authorities brought labourers who dumped stones, sand and mud on his 2.5 acre banana plantation. “The crop was about to come to harvest and I begged the MRO [ mandal revenue officer] to wait for a month… I lost 4 lakh rupees worth of harvest. A total of 75 acres of crop in the village was destroyed that day,” says Trimurthulu, who has since been working as an agricultural labourer for Rs. 250 a day in Tellavaram hamlet, 10 kilometres away. Tellavaram is among the 22 hamlets from where people will eventually be displaced as the project progresses.

Trimurthulu’s wife Botta Bhanu, 39, used to take care of the family’s 10 buffaloes, 20 goats, 40 sheep and 100 chickens.  Some of the animals were crushed under the dump of stones and sand.  The family didn’t get compensation for any of them. And they sold the other animals because no workers were left to look after them. “We used to employ 10 people in our house to take care of the dairy activities and do household work. Now, we have to work in someone else’s fields to earn our livelihood,” says Bhanu. 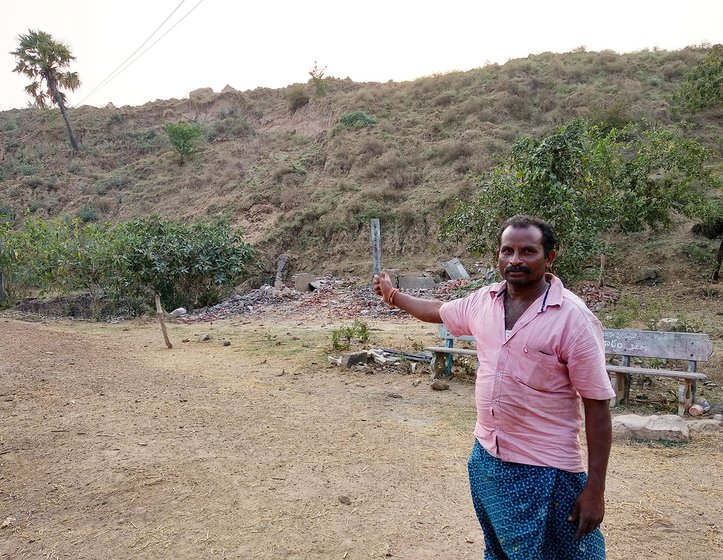 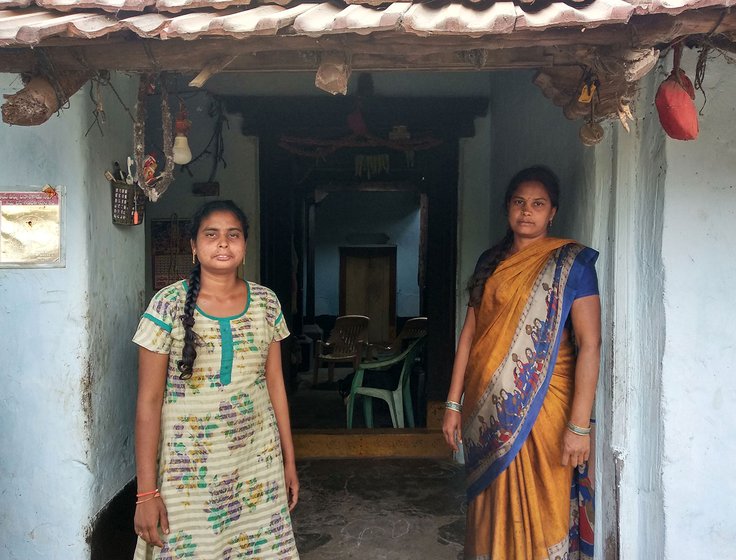 Botta Trimurthulu points to the rubble that allegedly destroyed his banana crop. Right: His wife Botta Bhanu (right) at their home with their daughter Sowjanya, who too was forced to  drop out of school

She recounts the fear they felt during the chaotic days of April-July 2016: “Some 40-50 policemen would come every day and threaten us that they will tie our hands and legs and throw us in the police jeep and transport us. Many of the families didn’t want to leave but they couldn’t take the pressure any longer,” says Bhanu.

When asked about this, the Polavaram circle inspector, Balaraju, tells me, "What you are saying is absolutely false. We actually helped the villagers with transportation."

The mandal revenue officer, Mukkanti, also refutes everything categorically. “No pressure was used to move the people,” he says. “In fact, the people moved out happily as they liked the package and their new pucca houses in the R&R colonies." About the dumping of debris on Trimurthulu’s farm. he says, "No such thing ever happened. These allegations are baseless."

Meanwhile, the protesting families of Pydipaka continue to demand that the government fully implement the LARR law. “Any number of pressure tactics will not work. We have lived in darkness for two years and got used to it. We will not move out of our village till we are given what we are legally entitled to,” says Trimurthulu. “I will die here, but we will not move till we get what we are supposed to under the law,” adds Sridevi.

Around 174 kilometres from Pydipaka, on the floodplain bank of the river Krishna, the chief minister of Andhra Pradesh, Chandrababu Naidu, reviews the Polavaram project every Monday sitting in his house – an illegal construction, widely reported about in the local media – even as Sridevi’s legitimate home on the banks of the Godavari might be pulled down any time.