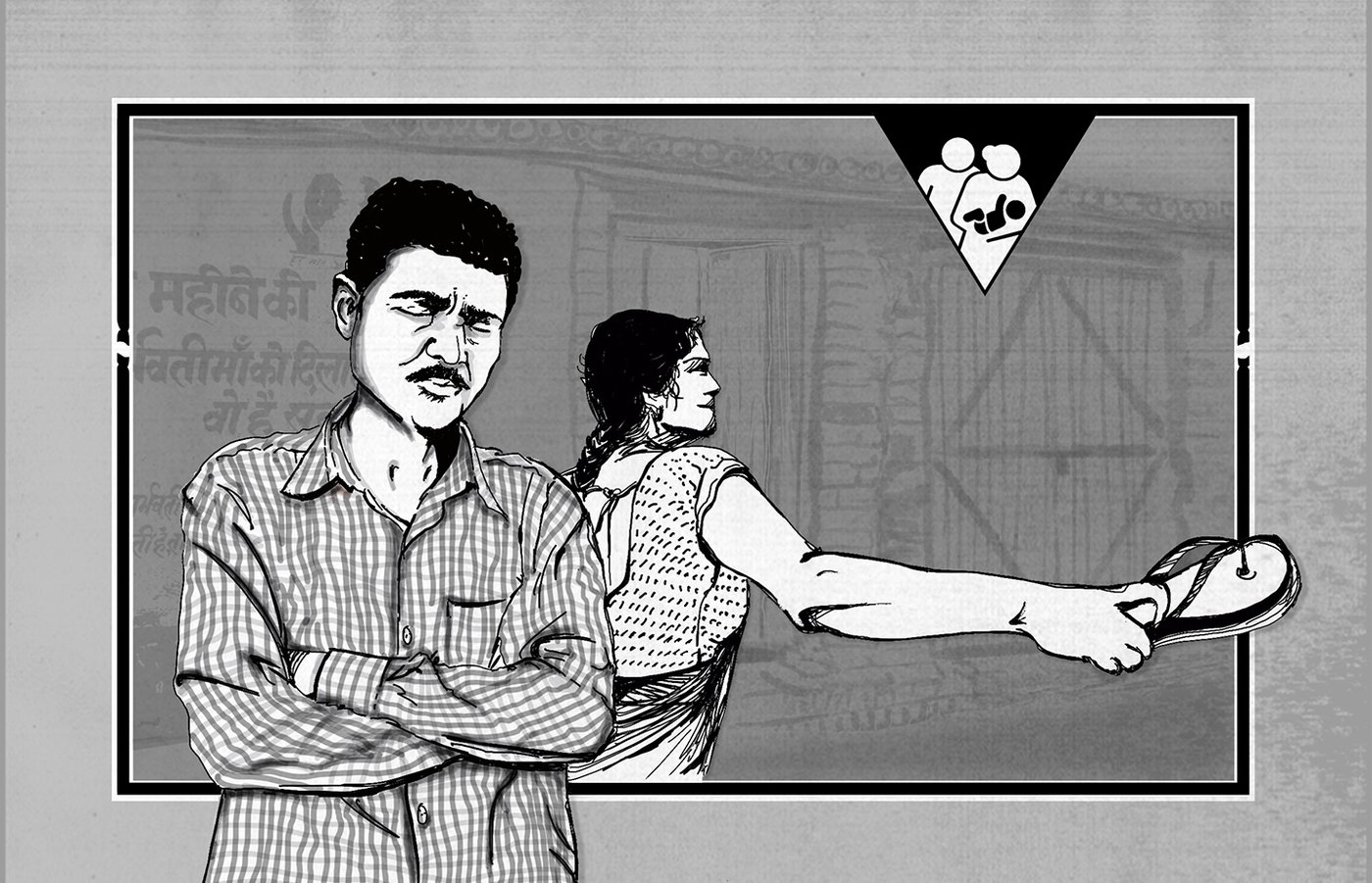 'Last year, only one man agreed to a vasectomy'

'Male engagement' in family planning is a buzzword, but the Vikas Mitras and ASHA workers of Bihar report little success in convincing men to undergo sterilisation, and contraception continues to be left to women

Nusrat Banno has convinced women not to have children in their teens; she has fought with their in-laws to allow them to start using contraception; and she has taken women to hospital to deliver their babies. But the 35-year-old accredited social health activist (ASHA) in Rampur village of Bihar’s Araria district believes the hardest part of her job is convincing men to get a vasectomy.

“Last year [2018], only one man agreed,” she told us in this village of roughly 3,400 people in Forbesganj block. “And after he got it done,” said this mother of four, laughing, “his wife came to hit me with a slipper.”

Rampur’s reluctance is reflected in other villages in Bihar. “Their biggest fear is that they will be ridiculed and laughed at by other men,” Vinay Kumar told me last year, just as he was about to begin another round of campaigning for an upcoming vasectomy week organised across the state every November by the government of Bihar. “They also think they will become weak, and won’t be able to have sex anymore, which is a myth.”

Kumar, 38, has spent the last year as a government-employed Vikas Mitra in Birra, a village of around 3,400 in Jehanabad’s Makhdumpur block. His tasks include creating awareness about, and implementing, various state-run schemes. Among his tasks is also the unenviable job of persuading men to agree to be sterilised – undergo a vasectomy, a minor surgical procedure during which the male vas deferens (tiny sperm-carrying tubes) are tied or sealed.

The Bihar numbers reflect nation-wide data trends:  across India, NFHS-4 records 36 per cent of currently married women (in the 15-49 age-group) as having undergone sterilisation, while only 0.3 per cent of these women report male sterilisation.

Condom use is also abysmally low in the country – only 5.6 per cent of currently married women aged 15 to 49 report condoms as a contraceptive measure. 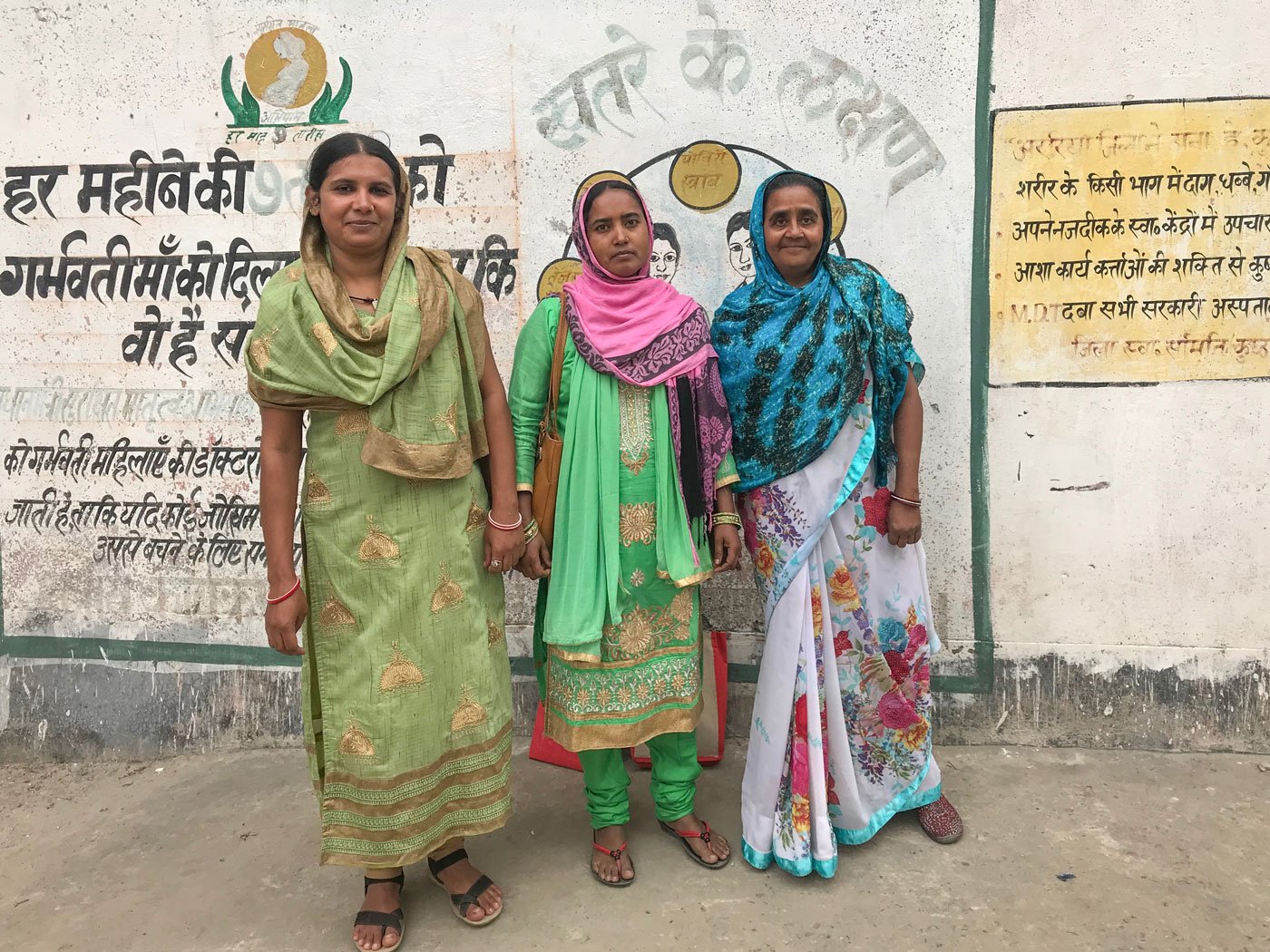 To address this imbalance, the Vikas Mitras (‘progress associates’ or ‘development friends’, whose minimum qualification is education up to Class 12) have been enlisted since 2018 in Bihar – 9,149 of them across the state, including 123 in Jehanabad district and 227 in Araria district, says data available with the Population Foundation of India – to help raise the number of vasectomies and male involvement in contraception.

This is in addition to Vinay Kumar's other tasks as a Vikas Mitra of ensuring that toilets are built, loans are verified and disbursed, and water is provided. In a state that sees recurring droughts and floods, he also has to ensure reimbursements for drought relief and verify the names of people eligible for flood relief.

Vikas Mitras are paid Rs. 10,000 a month by the Bihar Mahadalit Vikas Mission, and are expected to focus on the 21 Scheduled Caste communities listed as Mahadalit or most disadvantaged in the state. They are on the rolls of the district government and report to the block welfare officer. For convincing men to undergo vasectomies, a Vikas Mitra earns an extra Rs. 400 per person enlisted.

Bihar's annual week-long focus on male sterilisation, which Vinay Kumar was busy with when I met him, is one such attempt at 'male engagement' – a buzzword in the family planning context. Bihar is one of the high-focus states for family planning in India – its total fertility rate (TFR) of 3.41 for the 15-49 age-group is the highest in India (and the total fertility rate of Araria district, among a few other districts in the state, is higher still at 3.93) The national average TFR is 2.18 (NFHS-4).

The ‘male engagement’ though has been attempted for decades before the Vikas Mitras (among other public health sector workers) took on the task – since 1981, the central government has attached cash incentives to sterilisation, and now, men who undergo vasectomies get Rs. 3,000 each. 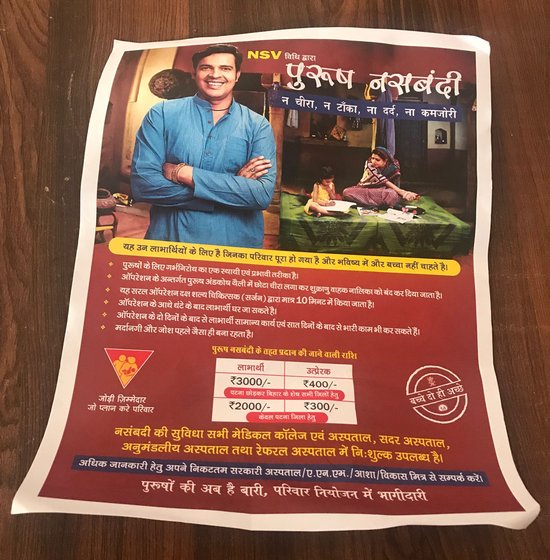 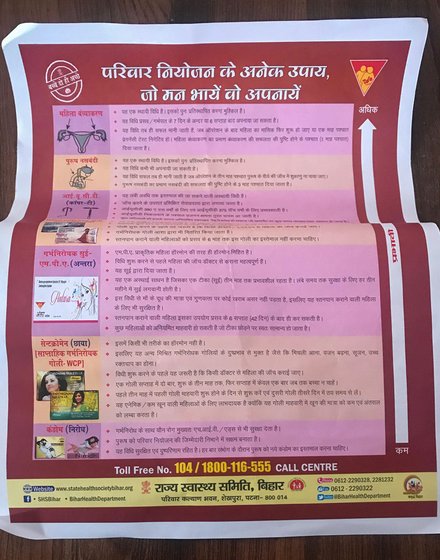 Still, the progress towards gender-equal contraception (across all methods) remains slow. Women across India continue to carry the bulk of this responsibility, and it is women who are usually expected to ensure spacing between children and avoid unwanted pregnancies. In India, 48 per cent of currently married women (aged 15 to 49) use such methods as sterilisation, intrauterine devices (IUDs), pills and injectables (grouped in NFHS-4 under 'modern methods of contraception'). Of these, female sterilisation (tubal ligation) remains the most popular contraceptive method in the country.

India's excessive focus on this permanent method – sterilisation of either women or men – over reversible methods such as contraceptive pills, condoms and IUDs, has been widely criticised. "Female sterilisation is prominent in India because it's an easy shortcut [to targets for family planning], since women have little agency or autonomy," said Oommen C. Kurian, senior fellow and head of the Health Initiative at the Observer Research Foundation.

The state family planning apparatus does attempt to enable women to be aware of, and exercise, their reproductive rights, including the right to birth control, to legal access to abortion and to access to reproductive healthcare. Many of these attempts have been routed through ASHA workers like Nusrat Banno, frontline community health workers who offer reproductive health counselling and follow-up. ASHAs also get an incentive of Rs. 500 for enlisting women for sterilisation, and women are paid Rs. 3,000 for undergoing the tubal ligation.

However, while men are likely to take around a week to recover from the sterilisation procedure, women sometimes take two to three months to recover fully. After the procedure, men are discharged immediately, whereas women have to stay at the healthcare centre at least for one night.

Despite this, many women fear that if they don’t get sterilised, they will be forced to have more children. And often, they opt for the procedure without telling their husband or in-laws – as Vinay Kumar’s wife did. 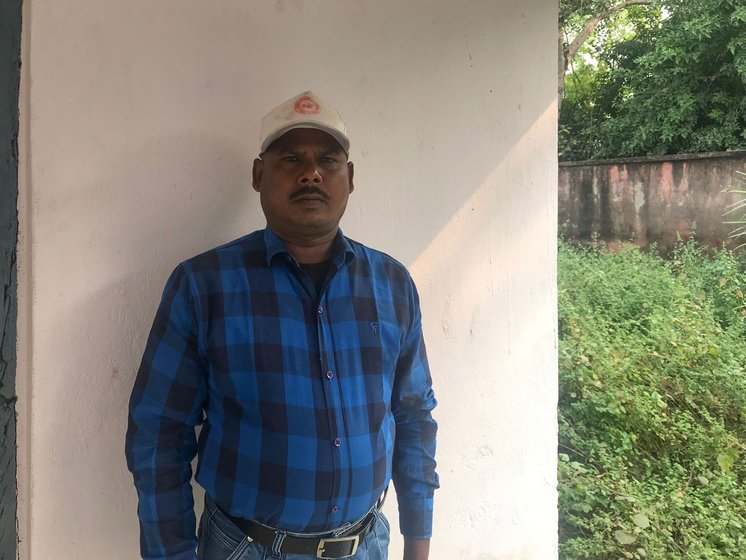 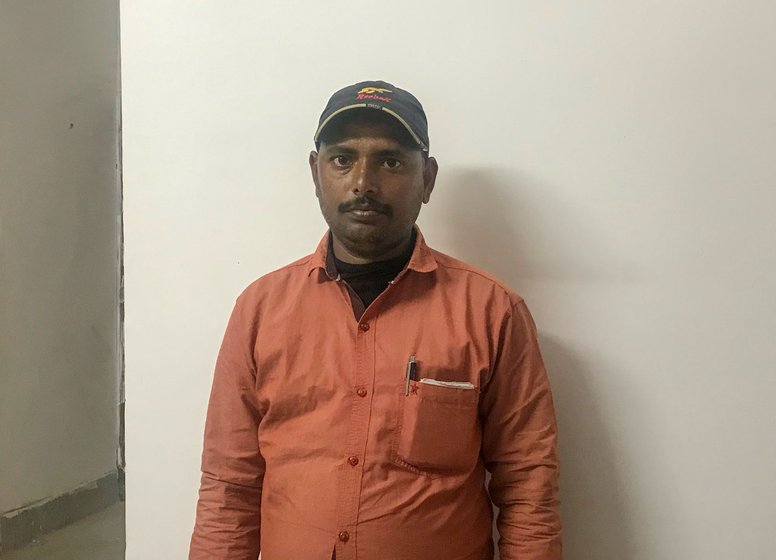 Like the men he counsels, Kumar too harbours fears and myths about vasectomies – and says he was scared 'of being too weak' after the procedure. “I didn’t know who to talk to,” he says. His wife’s decision to get a tubal ligation – after they had two children – was made and carried out on her own, without consulting or informing her husband.

While Kumar and other Vikas Mitras usually work within their own communities of Dalits and Mahadalits, for vasectomies they sometimes expand their ambit to upper-caste men. That comes with its own challenges.

“We are scared upper-caste men will ask us questions about the procedure we won’t be able to answer, so we stick to people of our community,” says Ajit Kumar Manjhi, 42, also a Vikas Mitra in Kalanaur village, Makhdumpur block, Jehanabad district. Manhji has three sons and a daughter.

Sometimes, it takes a minor ripple effect. In 2018, Manjhi enlisted two men. “I was talking to a man, and he said I won’t go alone. Everyone will laugh at me. So I convinced his neighbour too. That way, they felt confident.”

But 13 months after they underwent the vasectomy, the men still hadn’t received their incentive of Rs. 3,000 each. This happens often, which makes it harder to convince people, Manjhi says. The money is transferred to bank accounts, but not all men in villages have accounts. This adds to the Vikas Mitra's long list of duties. “If someone doesn’t have a bank account, I open one for them,” Vinay Kumar says. Each of the Vikas Mitras I spoke to had been able to convince not more than three to four men to enlist for a vasectomy over all of 2019. 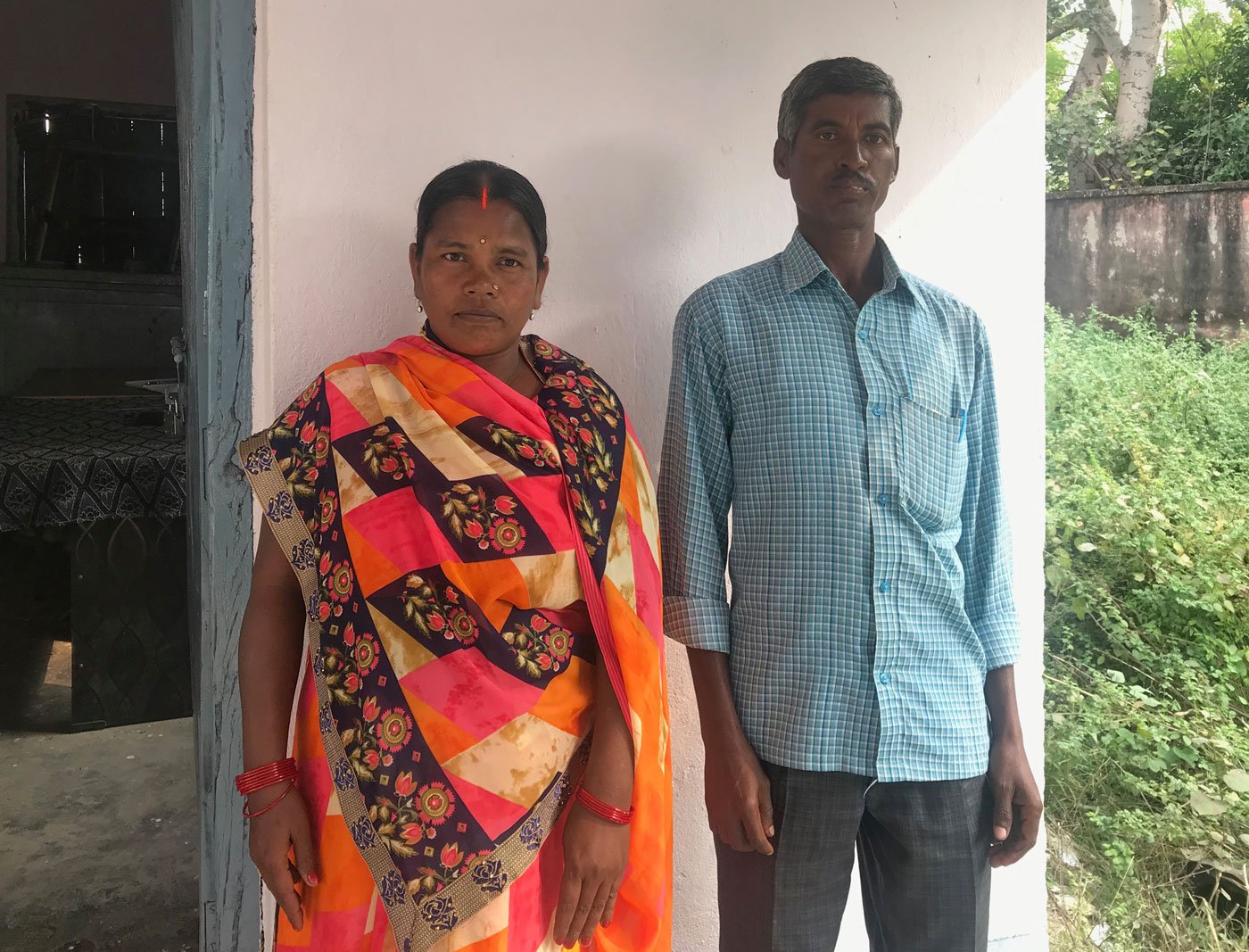 Vikas Mitra Malati Kumar and Nandkishore Manjhi: 'We work as a team. I talk to the women, he talks to their husbands', she says

Convincing a man to get sterilised also involves counselling his wife. Malati Kumar is a Vikas Mitra in Kohara village of Makhdumpur block, but relies on her husband, Nandkishore Manjhi, to talk to the men. “We work as a team. I talk to the women, he talks to their husbands,” she says.

“I ask them – how will you take care of the kids you already have if you keep having more,” Nandkishore Manhji says. Often, his advice is ignored.

ASHA facilitators too ask their husbands to help out. “As women, we can’t be seen talking to men about sterilisation. They say, ‘why are you telling us this? Talk to my wife.’ So I tell my husband to convince the men,” Nusrat Banno says.

From the women’s accounts, it is clear that ‘male engagement’ in family planning is not limited to enlisting men for sterilisation. It involves starting a conversation, it’s about telling them that their wife has an equal say in how many children she wants, and what kind of contraception they should choose. "This requires time, and both need to be convinced of the pros and cons of every method,” says Nikhat Naaz, a 41-year-old ASHA worker and mother of three in Rampur village of Araria district.

The women say they also have to think of the social implications that a vasectomy can have on their marriage. Recalling the incident where the man’s wife attempted to hit her with a slipper, Nusrat says, “She too was scared that the procedure would make her husband impotent and a target of ridicule in the village. And that he would in turn be violent with her.”

And then, she asks, “Women fear for their lives, but men fear being laughed at?”