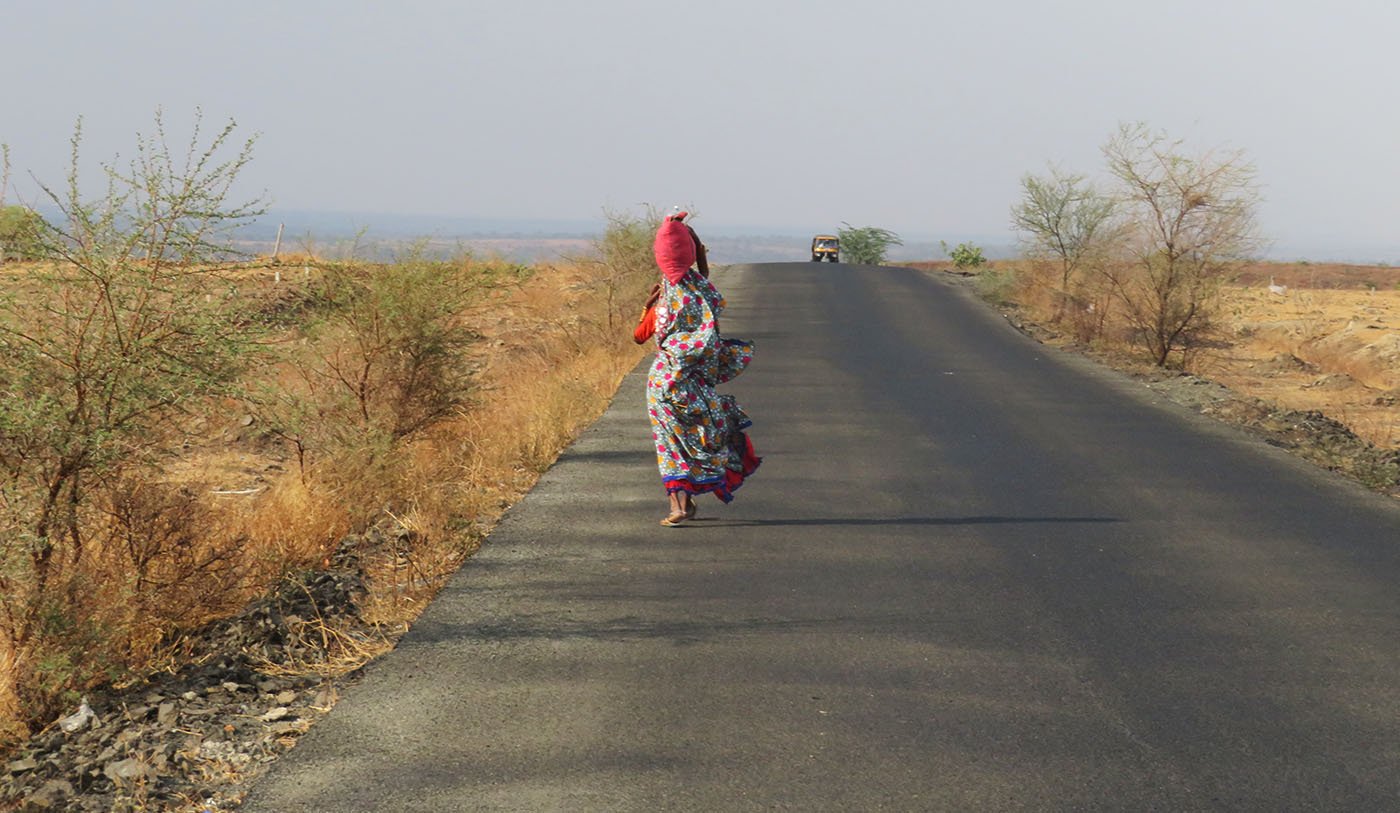 ‘Even in the heat, there is some guilt if I drink the water…’

Shalubai Chavan of Latur spends eight hours every day filling water for her family; others spend three times the rate for water than beer factories in Aurangabad. And usually, it is women who do this backbreaking task

Kewalbai Rathod, 60, is operating a heavy handpump. Every forceful draw is accompanied by a grunt, the veins in her forearm standing out, the wrinkles on her face deepening. For all her effort, the water barely trickles into the pot. Several villagers await their turn. And the pump might run out of water at any time.

An hour later, at around 5 p.m., Kewalbai has managed to fill two pots. Her husband Ramu, 65, sits on a nearby rock, gazing into space. “ Zaala re (It is done),” Kewalbai calls out in Marathi, and Ramu stands up, but does not move. She picks up one pot and walks up to him to hand it over. He parks it safely on his shoulder, while Kewalbai picks up the other. She then takes his hand and places it on her shoulder, and the two begin to walk towards their home. “He is blind,” she explains, looking at my puzzled face. 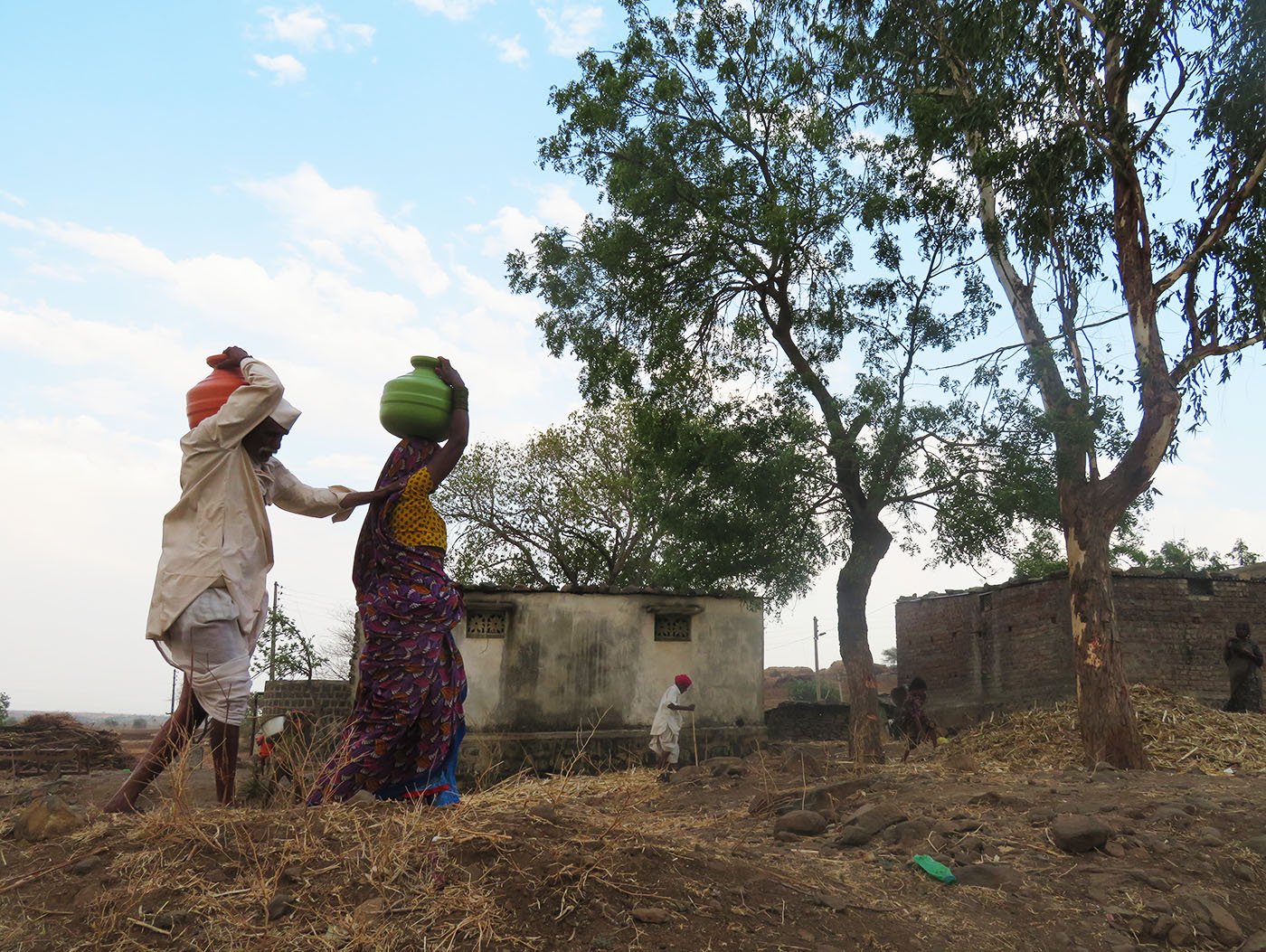 'He is blind',  Kewalbai explains as she leads her husband Ramu uphill to their home in Kashiram Somla. They ferry water she has painstakingly filled before they return for more

The handpump atop a borewell is at the foot of the hilly hamlet of Kashiram Somla in Udgir taluka of Maharashtra's Latur district. Every trip entails a 15-minute walk up the hill. Each pot can hold around 12 litresof water and, when full, would weigh nearly 12 kilos. Kewalbai leads Ramu up and down the rocky pathway several times a day. “We are a family of seven,” she says, on reaching their house at the corner of the hill. “I have three sons, two are married. All of them go out in search of work [as agricultural labourers or at construction sites in Udgir town] early in the morning. Fetching water therefore falls upon the two of us.”

The family owns neither farmland nor livestock. The daily wages of their sons and daughters-in-law sustain the household. “Ten pots a day [each containing 12-15 litres] is what we target. The two of us make five such trips every day,” says Ramu. “We only need water for our basic needs like cooking, washing and bathing. Those who farmland and rear livestock have to work even harder.”

Left: Kewalbai, 60, washes her pots before filling them with water. Right: Her husband Ramu sits by as she works the handpump

When I meet Shalubai Chavan, 40, at her home at 11.30 a.m., she has already spent five hours collecting water. She belongs to a Banjara (Scheduled Tribe) family of five, with two acres of farmland. “Our main source of income is milk products,” she says. “We rear two bulls, three cows and four buffaloes. Maintaining the livestock requires a lot of water.We need over 20 pots a day.”

Shalubai lives right along the curved road on the hill in Kashiram Somla, and has to walk a few minutes before descending towards the handpump. “There were two handpumps at the start of the summer,” she recollects, while washing clothes outside her home. “But one broke down. Now the entire hamlet of 400 people depends on a single handpump. Even in this heat [of May], there is a bit of guilt if I drink the water. The collector started supplying water through tankers, but they are irregular and we cannot rely on them.”

This is why pots are lined up at the handpump before dawn. “Fetching water after sunrise, with temperatures crossing 40 degrees [Celsius], is really exhausting,” says Shalubai, who is in the queue with four pots every morning at 4 a.m. “Still, the line is unending. I fill 12-15 pots in the morning and 5-8in the evening between 4 and 7. Waiting for my turn takes three hours, and the trips back and forth another two hours. It is 9 a.m. before I begin my household chores.” 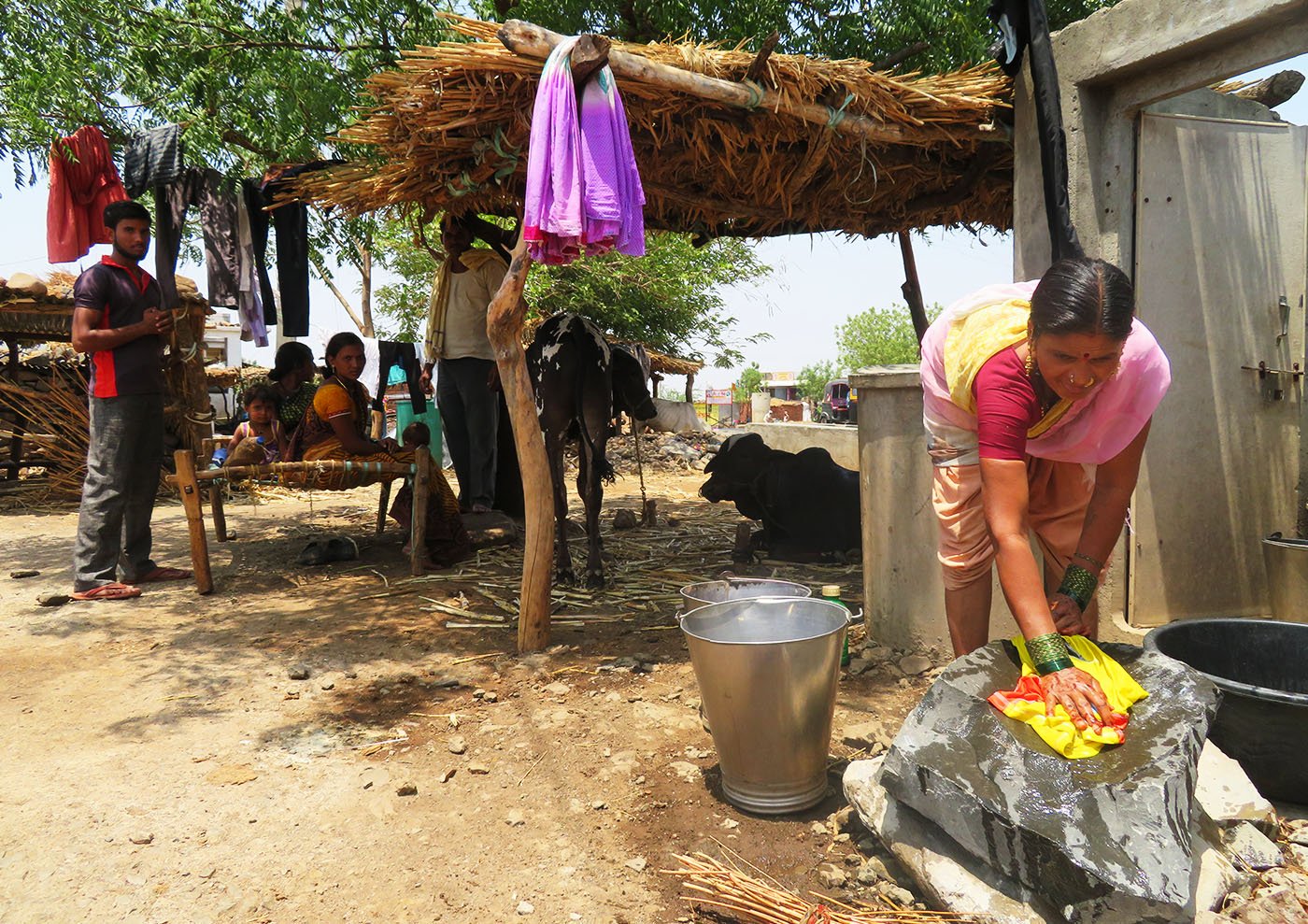 Shalubai spends a third of the day filling water; the rest goes in household chores and taking care of her family

Five hours in the morning and three hours late-afternoon – Shalubai spends eight hours of her day fetching water for the family. This is not uncommon: a National Commission for Women report states that women in rural households often spend 6-9 hours a day on water duties. Eight hours of farm labour would earn Shalubai Rs. 200, the standard daily wage here. The three summer months, March to May, cost her around Rs. 18,000 every year.

Besides income and time, the losses due to this gruelling work, invariably done by women and girls in rural India, include the impact on health and on education for girls. While women do various farming-related tasks too, they remain the principal water collectors in the household.  Men and boys barely contribute to this arduous physical task. The National Sample Survey (NSSO; 69 th round, 2012) notes that when drinking water had to be fetched from a distance, women did this work in 84.1 per cent of rural households, and men in 14.1 per cent.

Left: The scarcity of water and fodder affects the livestock in Shalubai's household. Right: The  small tank in her courtyard that is running dry

Shalubai's husband Rajaram too uses the water she has fetched to get ready and go to the farm. “This season at least I come back with water after eight hours,” Shalubai says. “Last year’s situation was so grim, I would walk for hours and come back empty-handed. I once walked 20 kilometres to get fodder for my livestock.”

Shalubai gets no respite between her two water-fetching sessions. “Two of my sons are in school,” she says. “I have to look after them, get them ready for school. Besides, I cook for the family, wash clothes and utensils, and manage the household.”

Watch video: 'I leave my house at 4 a.m. and stand in the queue,' Shalubai describes how her day begins

Around 150 kilometres from Udgir, in Takwiki village in Osmanabad district, Prayagbai Dolare has her own set of problems.

Nearly 70, Dolare is a Dalit who has faced discrimination for most of her life. “It has been better in the last few years,” she quips, on her way to fetch water through farmlands. “Several water sources used to be closed to me. I would often be the last in any queue.There is still one public well in the village where I am not allowed to go.”

In her family, Dolare is responsible for water as well as daily wages. “We do not have any kids,” she says, her saree wrapped around her head in an attempt to minimise the effect of the heat.The temperature is touching 45 degrees Celsius. “My husband is handicapped. He cannot walk, and can hardly work as a labourer.”

Three days a week, Dolare spends four to five hours storing enough water to last for seven days. “We manage with 30-35 pots a week,” she says. The water source, a private borewell, is about a kilometre from her home. “I cannot carry more than one pot at a time. At my age, it takes at least half-an-hour for every pot.”

The rest of the week, Dolare works as an agricultural labourer; because of her age, she earns only Rs.100  a day. “We are pulling along somehow, but what will we do once I am unable to work?” On the three days she spends fetching water, she forgoes her daily wages, cutting down her potential weekly income by half.

Watch video: 'I keep my hand on her shoulder and we walk. This is a bad time for water. What can I do?​' Ramu says about his trip to and from the handpump each day

Takwiki, like most villages in the eight districts that constitute the Marathwada region of Maharashtra, has an acute water scarcity in summer, when the wells, ponds, lakes and dams usually run dry. This is also the period when panic-stricken farmers sink borewells everywhere, in the hope of  finding a private source of water. If a family is lucky enough to drill a borewell at the right spot, they become water-independent, and  can even start a lucrative trade.

Many in Marathwada milk the water crisis by selling water for Rs.2-4 for every12-15 litre pot. Dolare pays Rs.2 for a pot. “That is 70 rupees of water per week,” she says. A little less than a fourth of what she earns in seven days. If the scarcity deepens, she could end up paying much higher rates.

Around 250 kilometres north of Takwiki, however, roughly 3 million litres of water per day (mld) are available at just 4 paise per litre to the 16 beer factories and distilleries operating in Aurangabad. Maharashtra Industrial Development Corporation (MIDC) officials insist  the beer companies are charged Rs.42, but don’t add that this is for every 1,000 litres.

Dolare would have to pay more than three times as much for 1,000 litres of water, and walk for 35 hours to collect that water.

Left: Many villagers gather at to fill water at the handpump at Kahiram Somala village every morning. Right: A young woman fills her bucket with dirty water fearing that the handpump might give in anytime

In April 2016, following a disastrous drought, the Aurangabad bench of the Bombay High Court ordered a 50 per cent water cut for the breweries, which were collectively guzzling 5.207 mld of water. “When people had not seen water for days, it was inhuman that breweries were guzzling the precious resource,” the bench said.

Back in Kashiram Somla, Kewalbai empties two pots of water into a drum. The farmlands around her are empty for now, but a crowd has gathered around the handpump, as always. She takes Ramu by the hand, picks up the two empty pots, and they begin another trip down the hill.