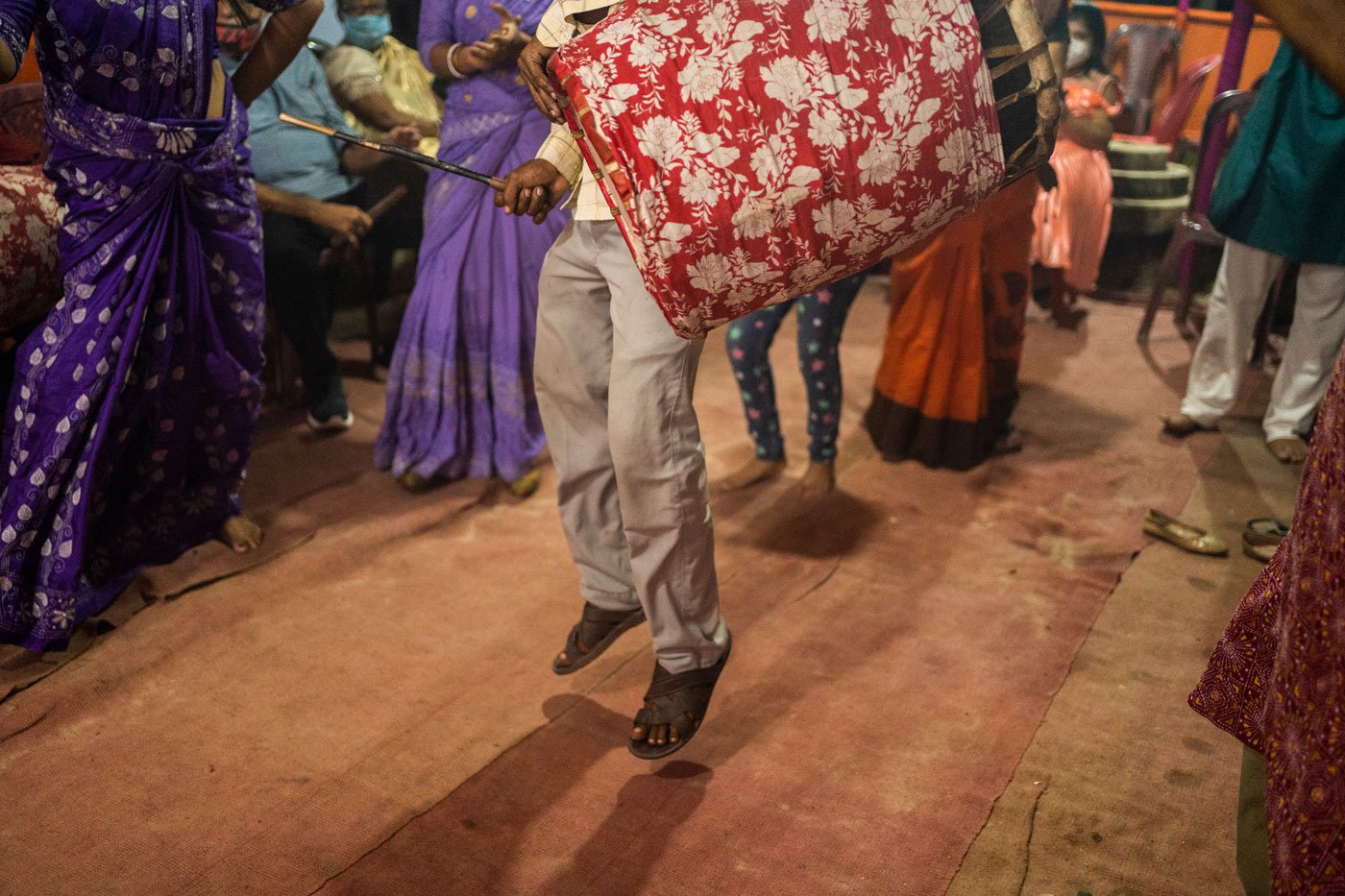 Dhakis for Durga: without skipping a drumbeat

The drums of Agartala’s dhakis are already pounding, with Durga Puja beginning on October 11. At other times, these drummers ply cycle rickshaws, or work as vendors, farmers, plumbers and electricians

The sounds of the dhak are beginning to reverberate across Agartala. Durga Puja is coming up on October 11, and preparations for the celebrations begin weeks in advance every year – the scaffolding for pandals is built, idol-makers give finishing touches to idols, families purchase new clothes.

The dhak , a barrel-shaped drum slung from the neck or kept on a solid platform and played with sticks, is integral to these celebrations.

Playing the dhak is a seasonal job. Five days of the Puja every year, with the final beat sounding up to the day of Lakshmi Puja – this year, it's on October 20. Some dhakis get called to play during Diwali too. But it’s during Durga Puja that the dhak is in great demand in Agartala and in other parts of the state of Tripura.

The dhakis are invited to play by pandal committees as well as by families. Sometimes, before they are hired, they are asked to perform as a trial – most of them are adept, having learnt from senior family members. “I used to play with my older cousins,” says 45-year-old Indrajit Rishidas. “I started with the kashi [a metallic plate-like instrument played with a small stick], then the dhol , and then dhak .” (He, and other Rishidas, Rohidas and Ravidas families belong to the Muchi community, listed as a Scheduled Caste in Tripura.)

Like many of Agartala’s dhakis , Indrajit works as a cycle rickshaw driver for the rest of the year. At times, like the others, he also plays in bands – locally known as ‘band-party’ – during weddings and other celebrations. Besides these occasional jobs, the dhakis also take up daily wage work as electricians or plumbers, while some are vegetable vendors and some are farmers in nearby villages who come to Agartala when hired for performances. 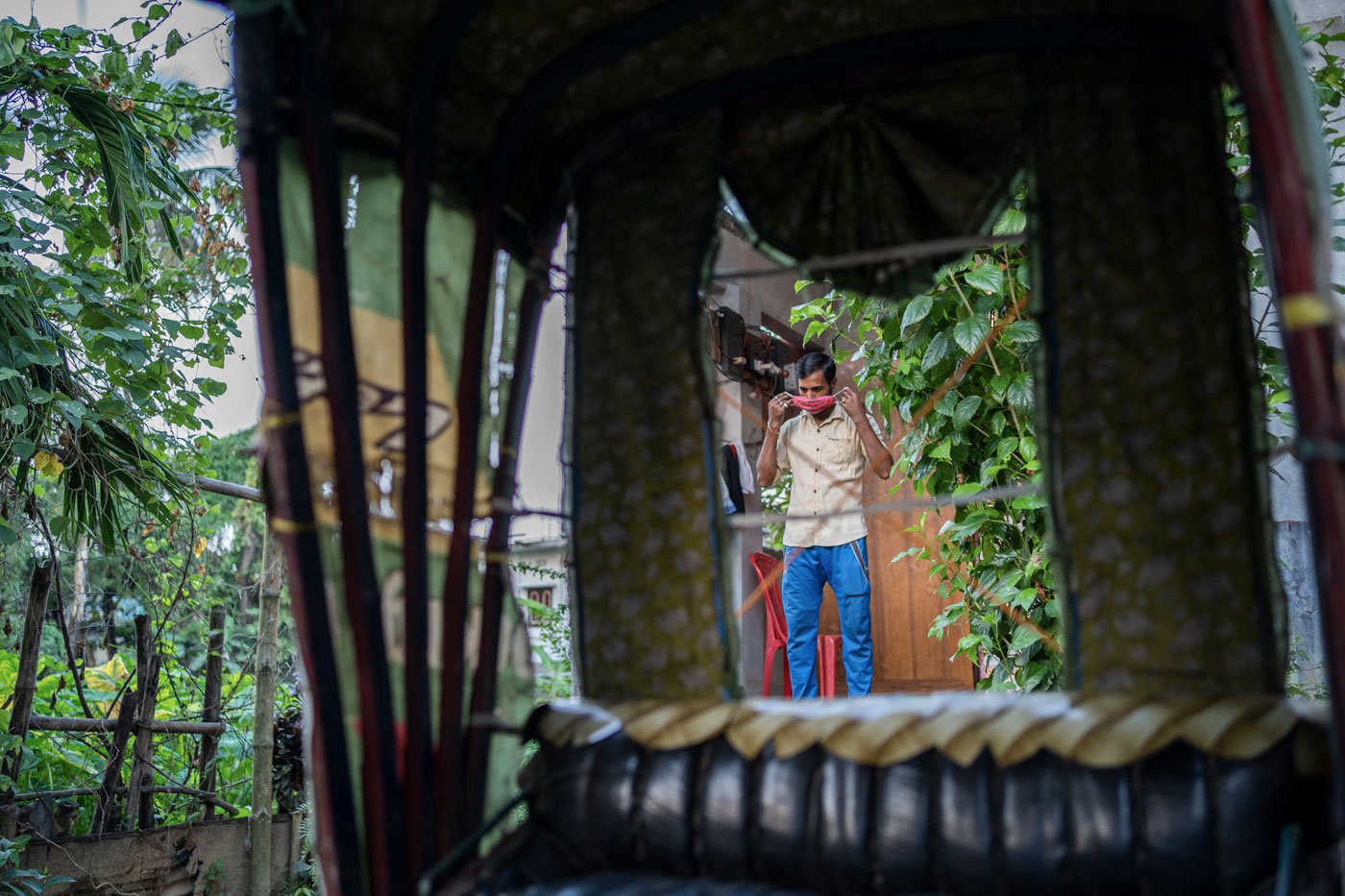 Indrajit Rishidas steps out for work near his home in Agartala's Bhati Abhoynagar area. Until the Puja celebrations begin, many dhakis continue to ply cycle rickshaws

As a cycle rickshaw driver, Indrajit earns around Rs. 500 a day. “We have to do something to earn plying a rickshaw is easy to get into,” he says. “There is no point in waiting for better work.” During the Durga Puja season, as a dhaki he can make in a week what he earns on rickshaws in a month – this season, in 2021, he has been engaged by a pandal committee to play for a total of Rs. 15,000 – though some manage to negotiate smaller amounts.

At the pandals where dhakis (usually only men play the instrument in Agartala) are hired for the five Puja days, Indrajit says, “We have to be present when the priest tells us to be there. We play for about three hours during the morning puja and 3-4 hours in the evening.”

The ‘band-party’ assignments are occasional. “We generally work as a team of six, mostly during the wedding season and charge according to the number of days we perform. Some hire us for 1-2 days, some for 6-7 days,” Indrajit says. That fetches the troupe a total of Rs. 5,000-6,000 per day.

Last year, due to the Covid-19 pandemic, after many cancelled their Puja plans, the dhakis had to continue to rely on their income and savings from plying rickshaws or doing other jobs, though a few managed to get hired last minute to play the dhak . (All the photos in this story were taken last year, in October 2020.)

Lakshmi Puja, usually around a week after the first day of Durga Puja, is the last day of ‘employment’ for many dhakis . That evening, they go out on the streets of Agartala with their drums, either alone or in pairs. Families call them to play at their houses for 5-10 minutes to mark the auspicious occasion. In return, the dhakis are paid barely Rs. 20-50 by each household, and many say they do this simply to keep up the tradition. 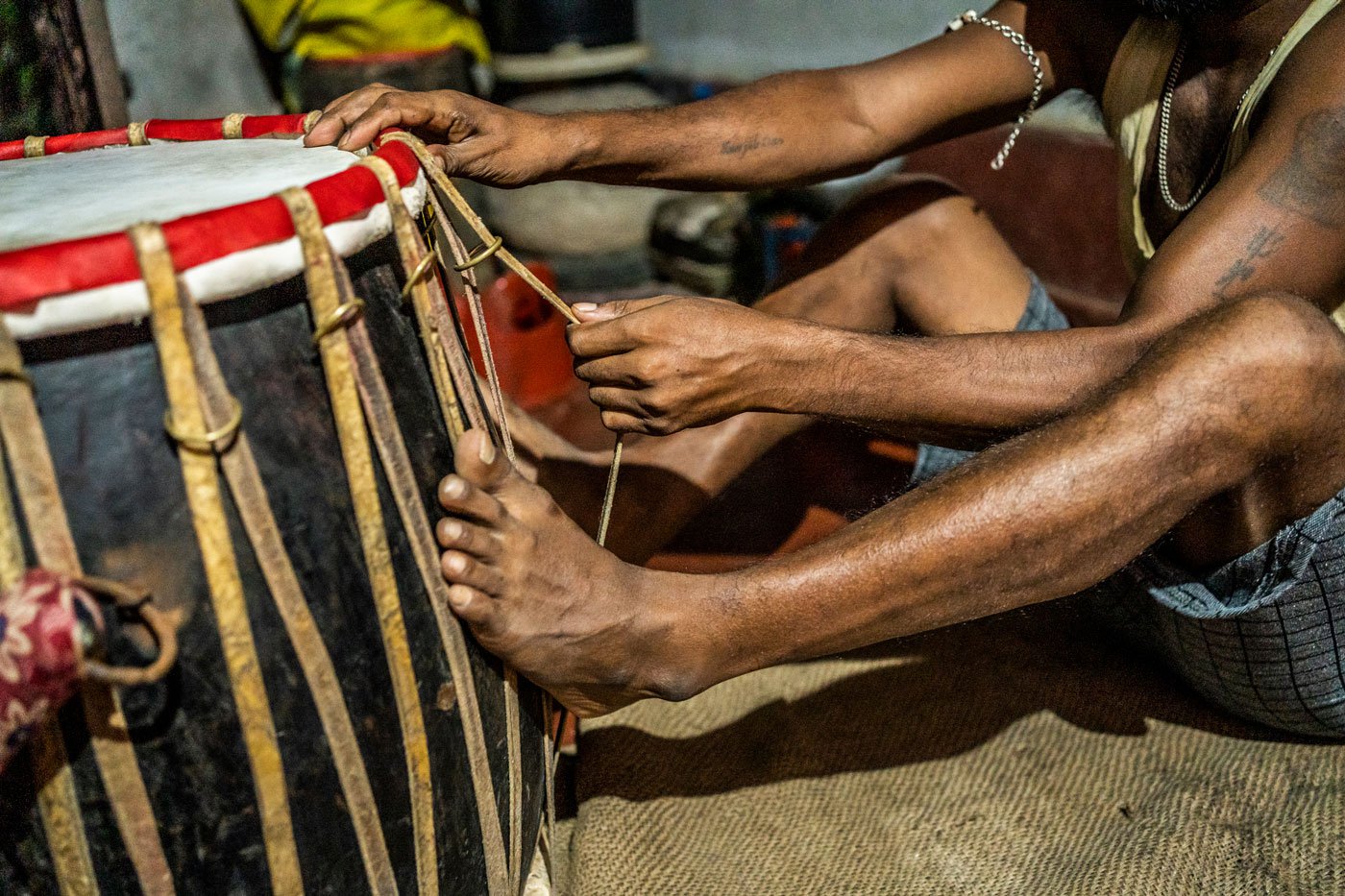 Preparations begin about 10 days before Durga Puja. The dhaks are taken out and the ropes are cleaned and tightened to achieve the desired sound quality. This is physically exhausting work because the ropes are made of animal skin and become stiff over time. The process usually takes two people. “It requires a good amount of strength and is difficult to do alone,” says Indrajit Rishidas. “It is an important step since the quality of the sound of dhak depends on this” 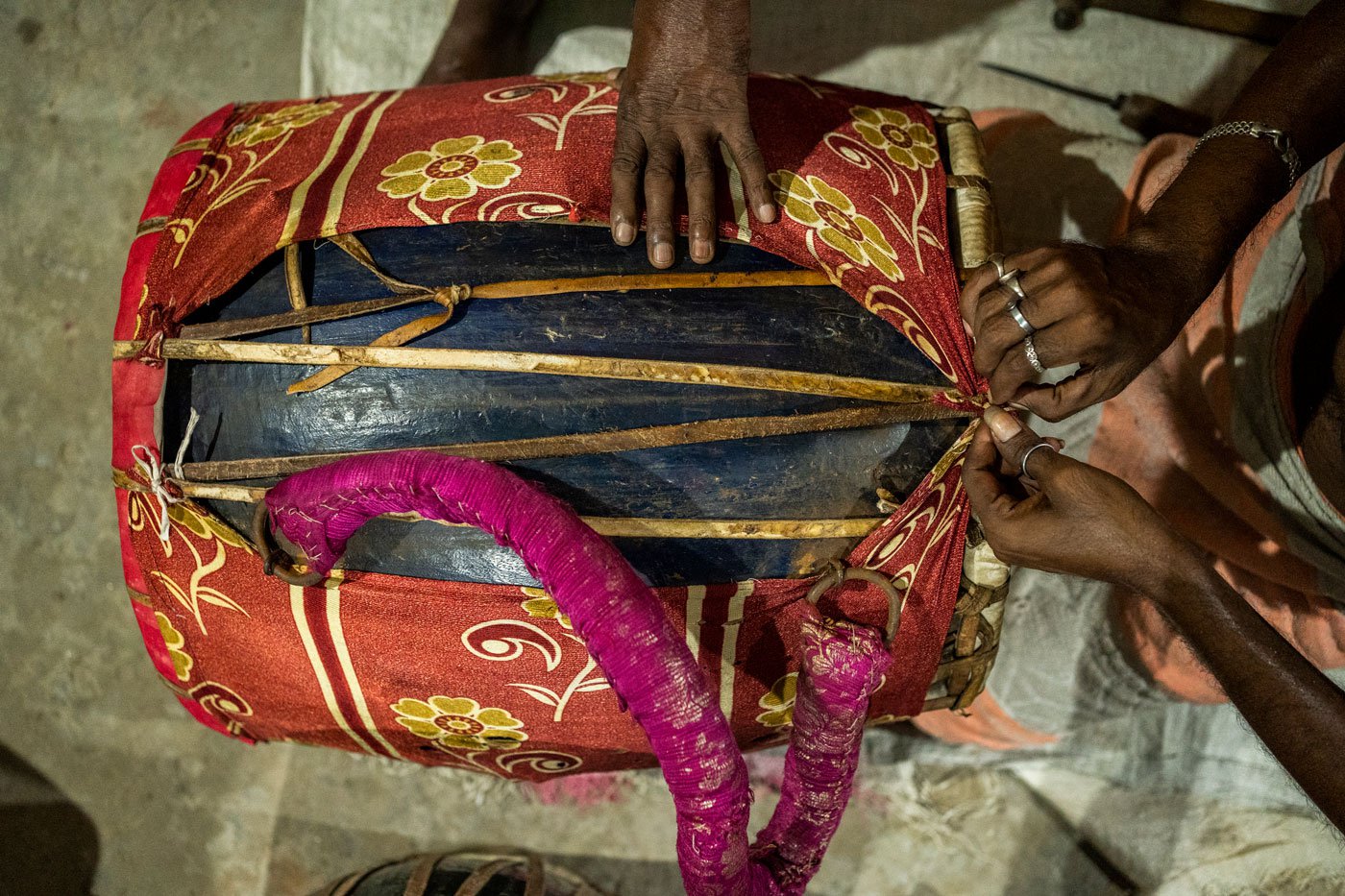 After the cleaning and sound check, the dhaks are carefully covered with clean cloth and temporarily stored again on high shelves – and then taken out only during the Puja 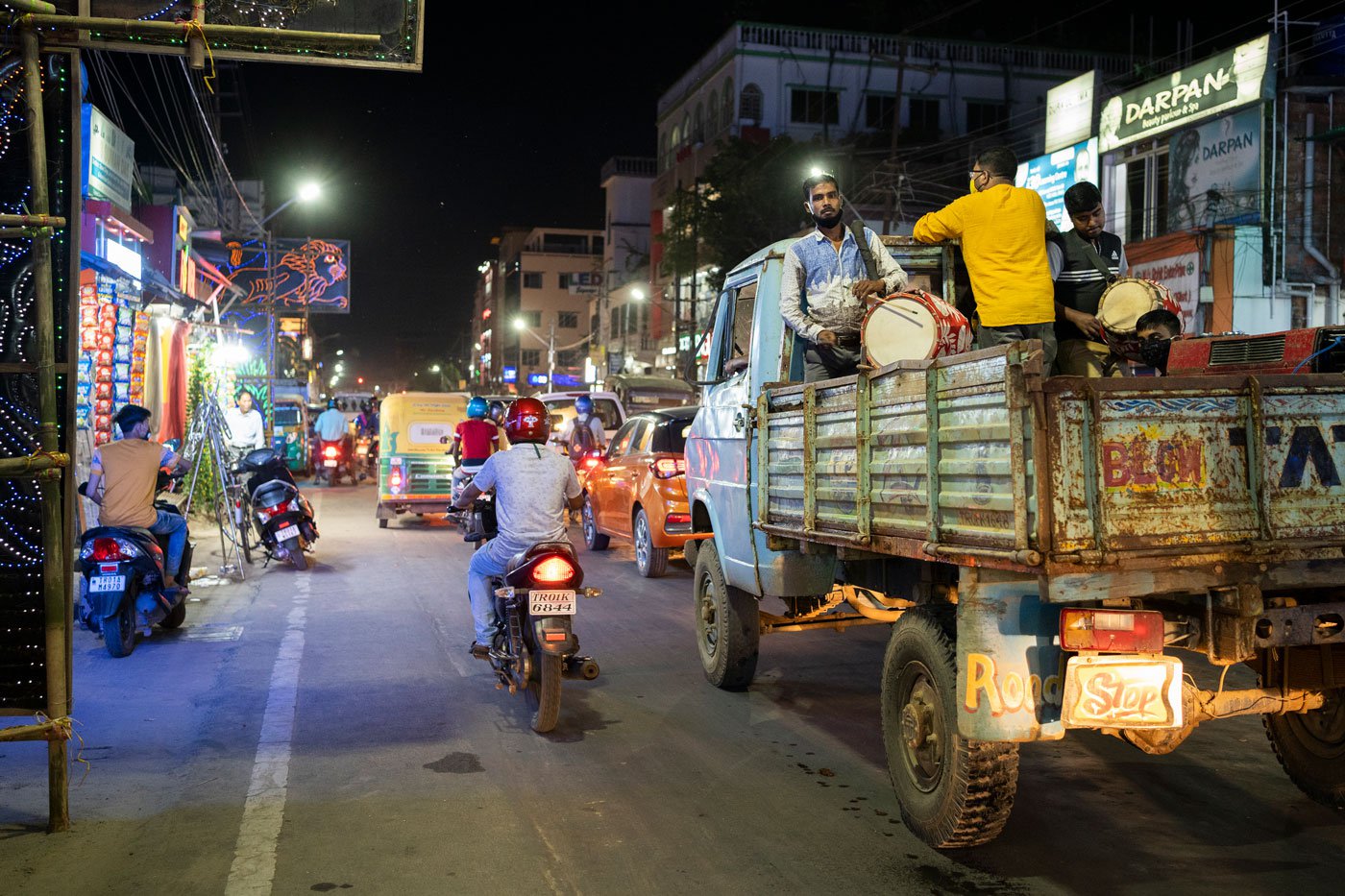 While many in the city prepare to celebrate, two drummers play the dhak on the way to a shop to bring the Durga idol, near the city’s Colonel Chowmuhani (crossroads). The dhak is played during various Puja rituals – while bringing the idol, placing it in the pandal , during the puja, and along with the immersion procession 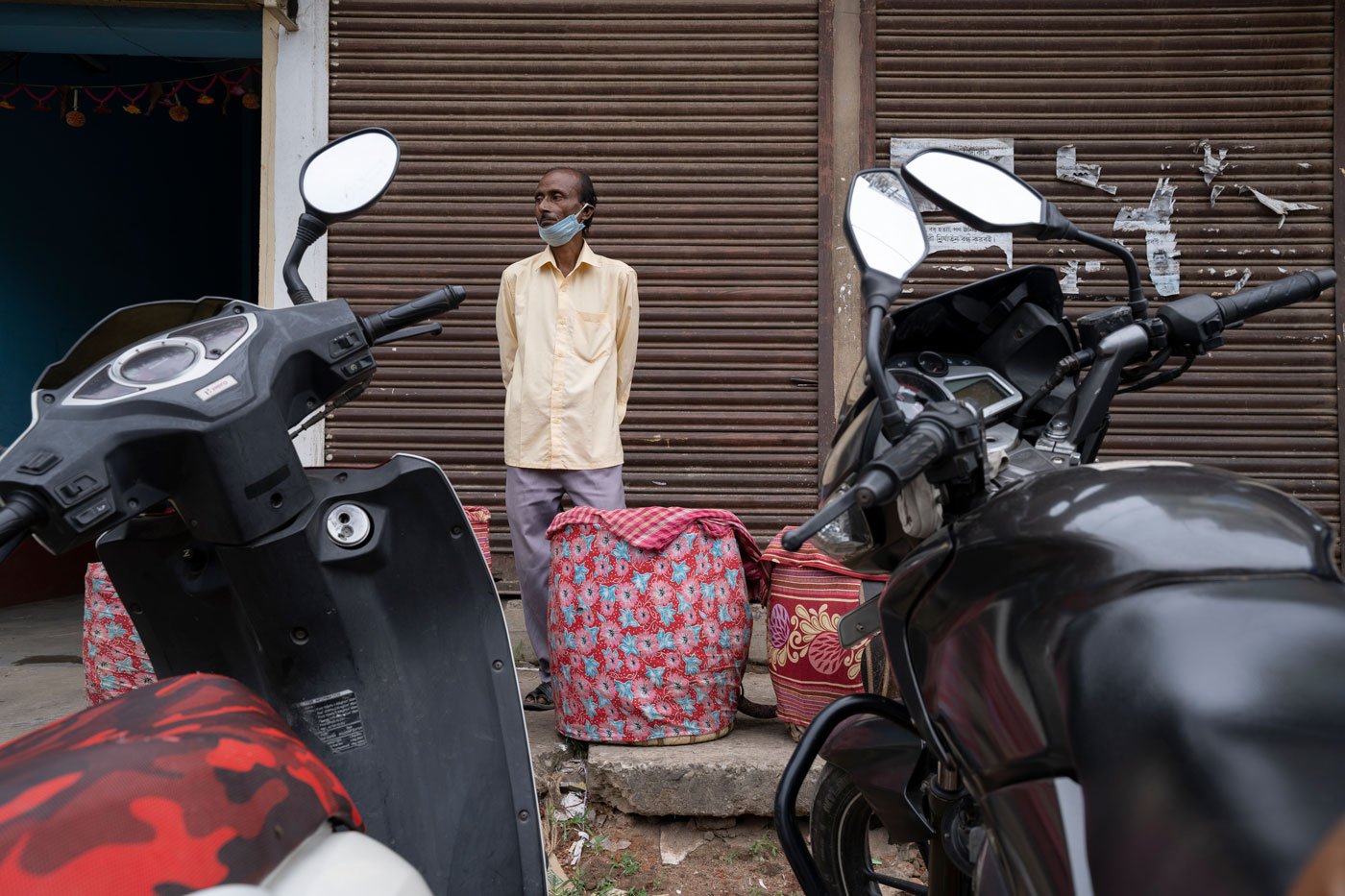 A dhaki waits at the Kaman Chowmuhani junction in central Agartala, hoping to be hired. Every year, dhakis from nearby villages and towns congregate at specific points in Tripura’s capital city two days before Durga Puja, and wait there all day. In 2020, due to Covid-19, very few got hired 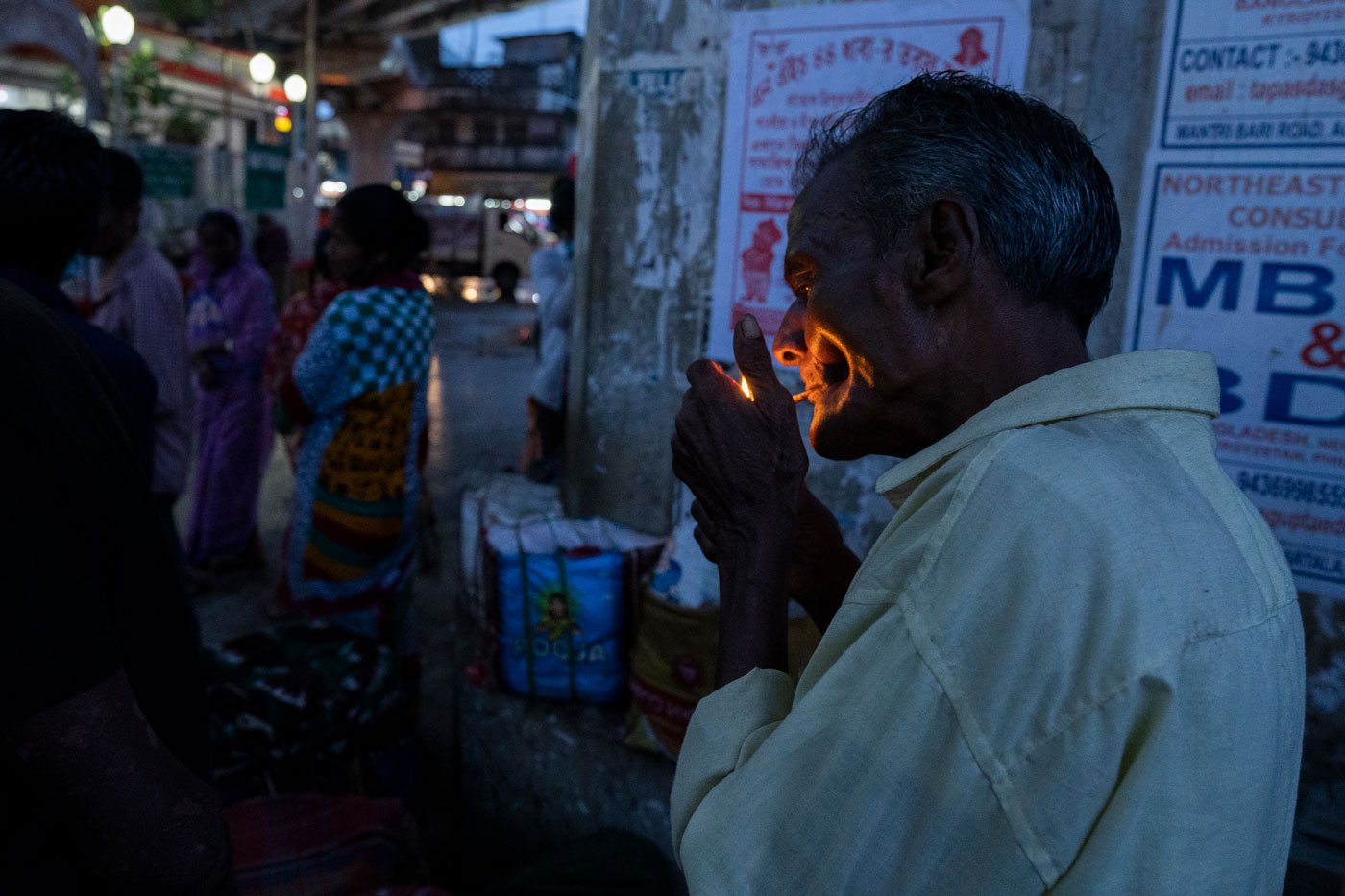 Babul Ravidas, a dhaki who has come to Agartala from his village around 20 kilometres away, taking a smoke break after a tiring day of waiting 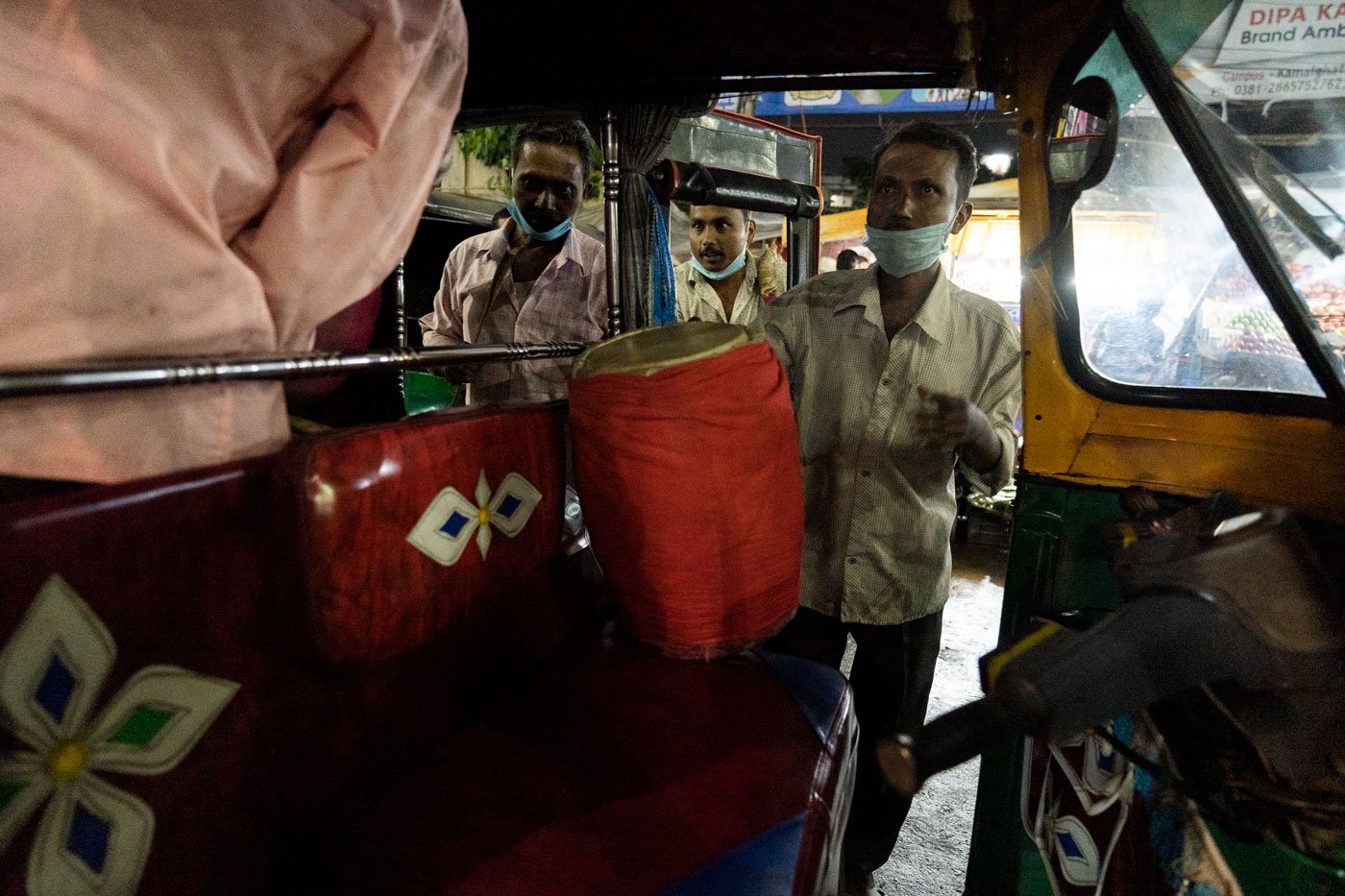 Near the Battala bus stand in central Agartala, dhaki gets into an autorickshaw to return to their village. This is one of the spots where dhakis from various villages and towns arrive two days before Durga Puja, hoping to be hired. This group waited all day before they decided to go back around 9 p.m. 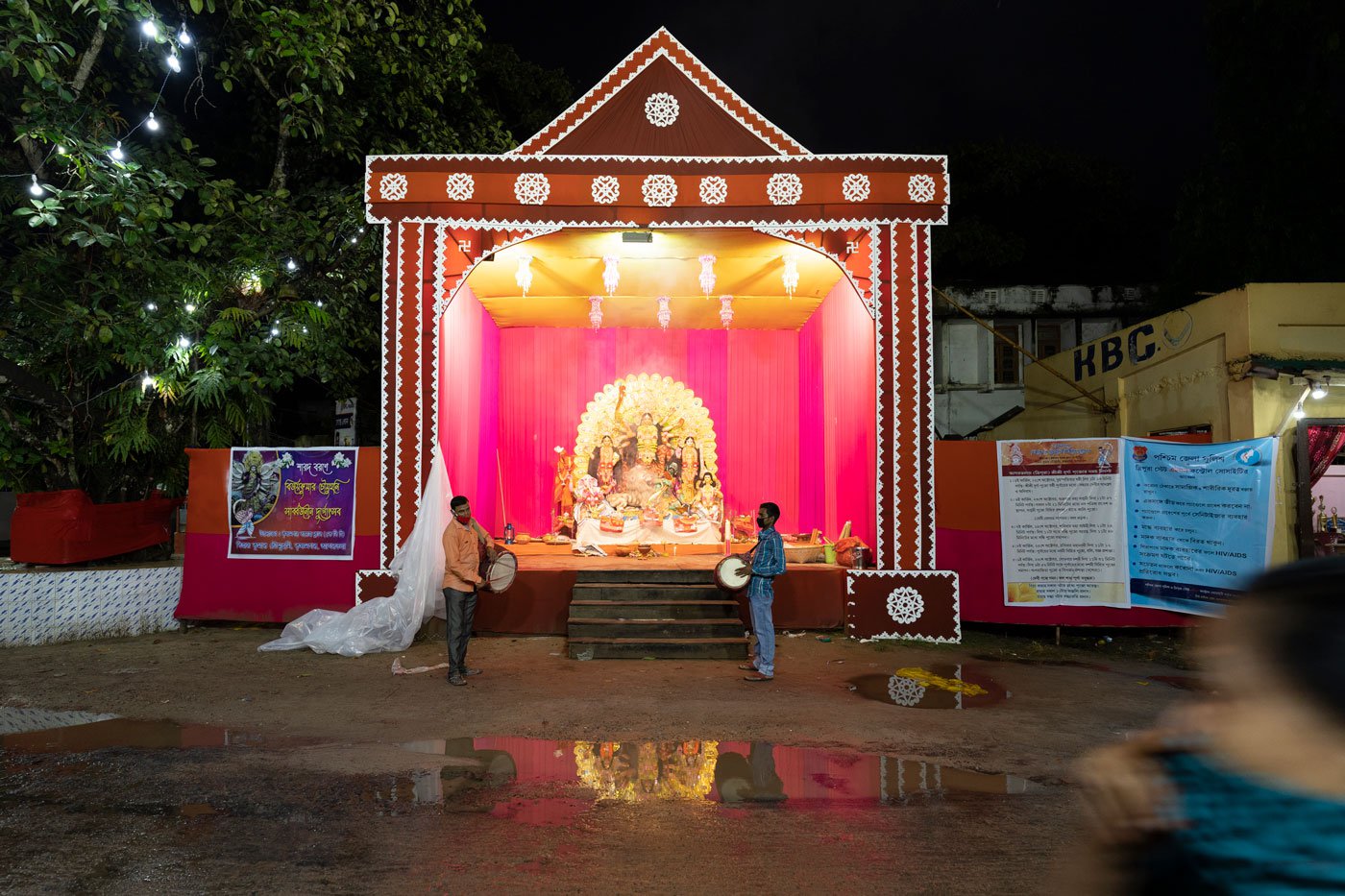 Performing at an empty puja marquee in the Bijaykumar Chowmuhani area – unheard of before the pandemic. But not all pandals in Agartala were so empty even last year 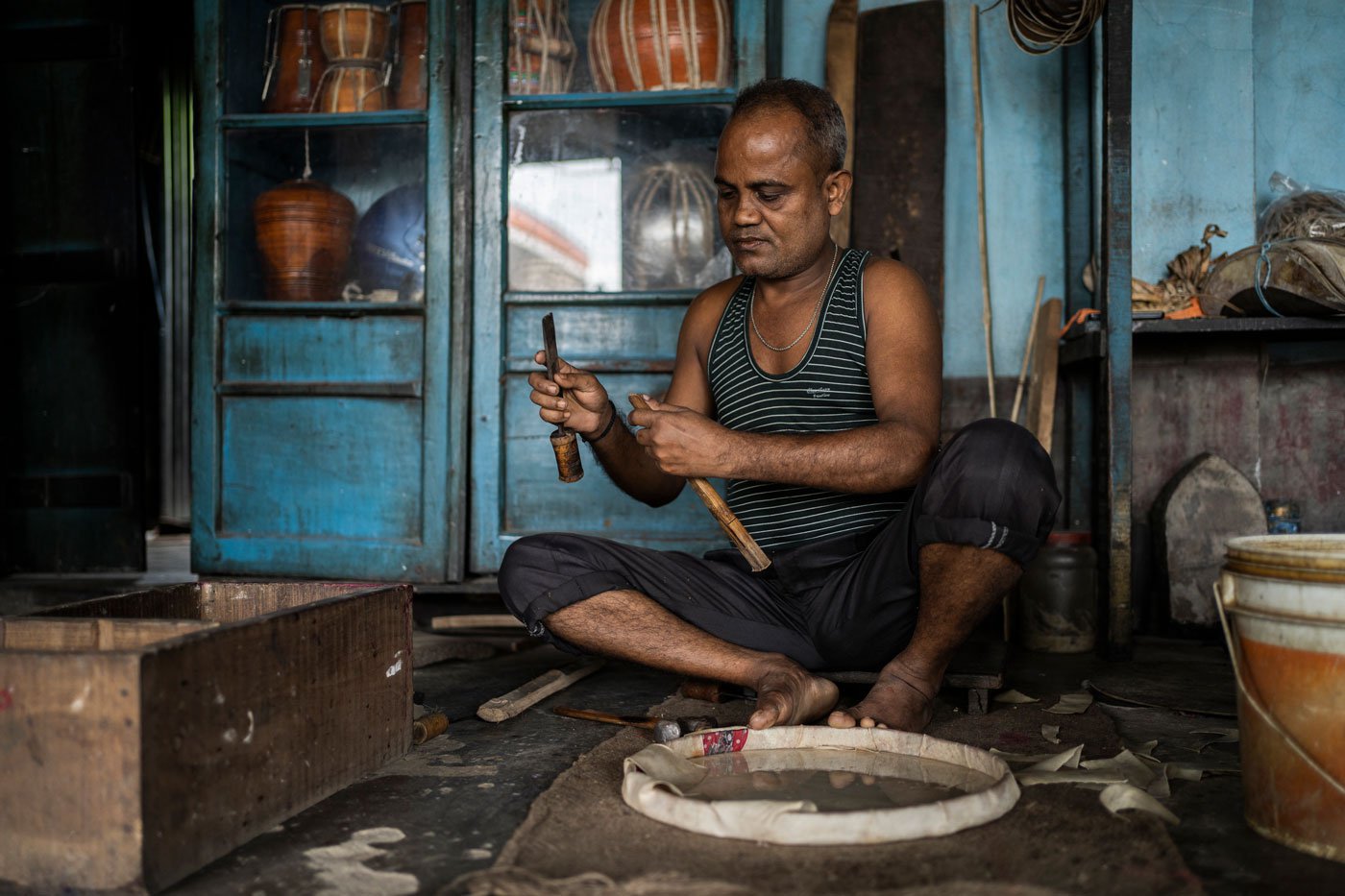 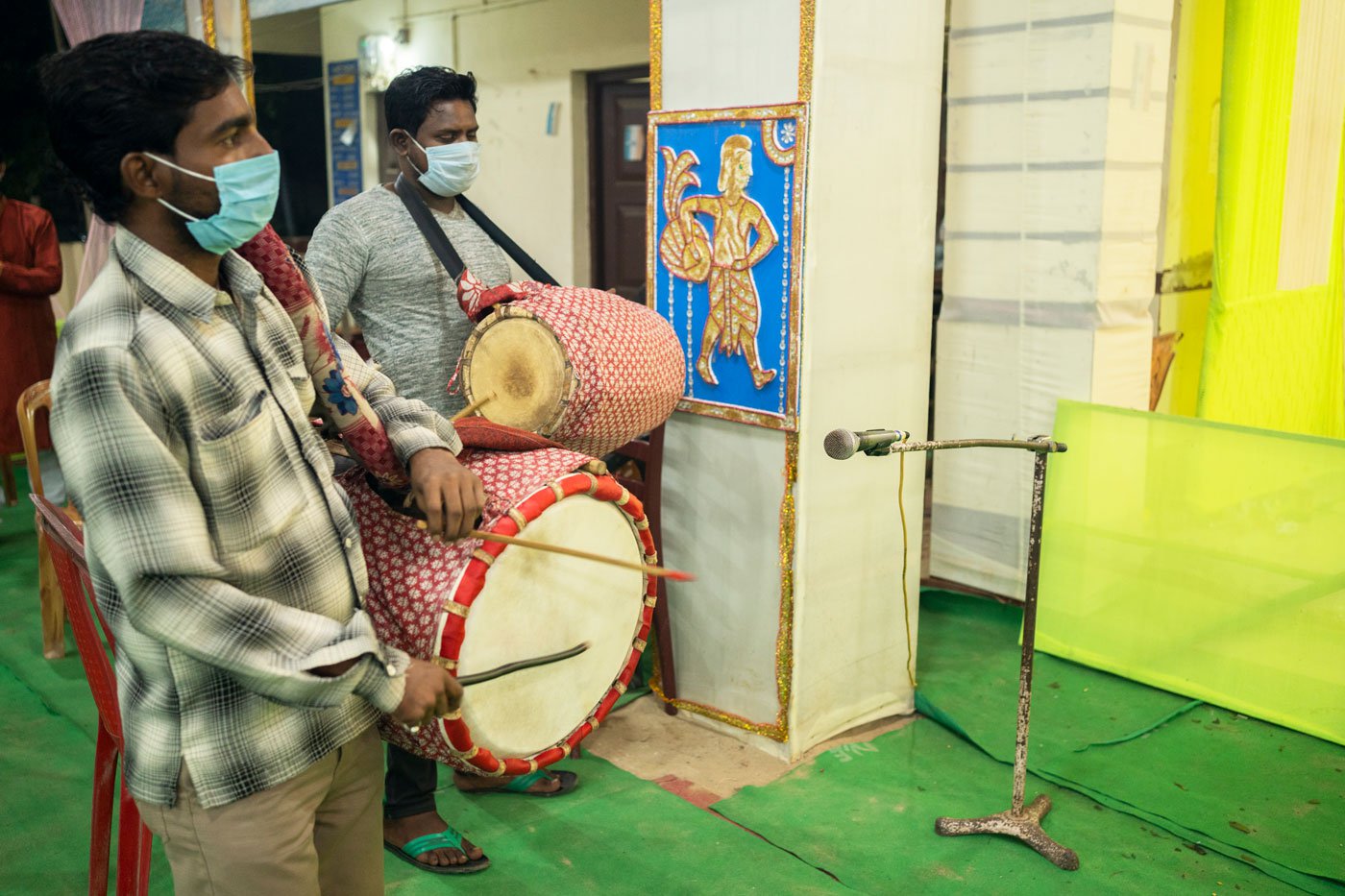 Tradition and technology combine – a microphone being used to amplify the dhak’s sound at Ramnagar Road No. 4. The dhak is a loud instrument and does not usually require an amplifier – its sound can reverberate across long distances. Montu Rishidas (not in this photo), who has been playing the dhak for more than 40 years, says that new technology is one reason dhakis don’t get much work now: "Nowadays, one just needs to click a button on their phone to play the music of a dhak” 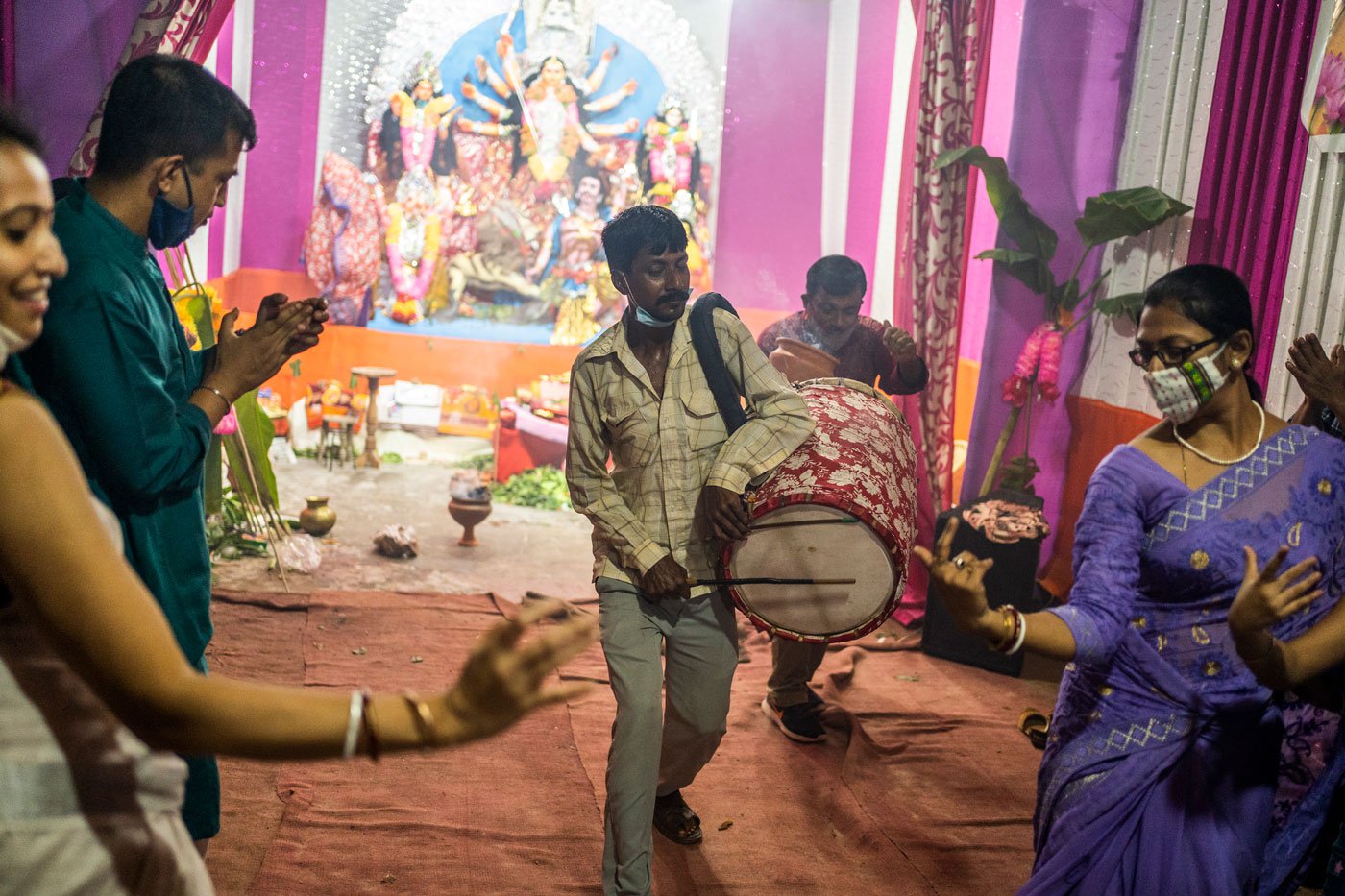 Those who found work in 2020 got it because of long-term-associations with an individual, club or family. Here, at Ramnagar Road No. 1, Keshab Rishidas, at other times a cycle rickshaw driver, dances with his dhak in a local club's pandal. He knows a club member, and that’s how he was called to perform 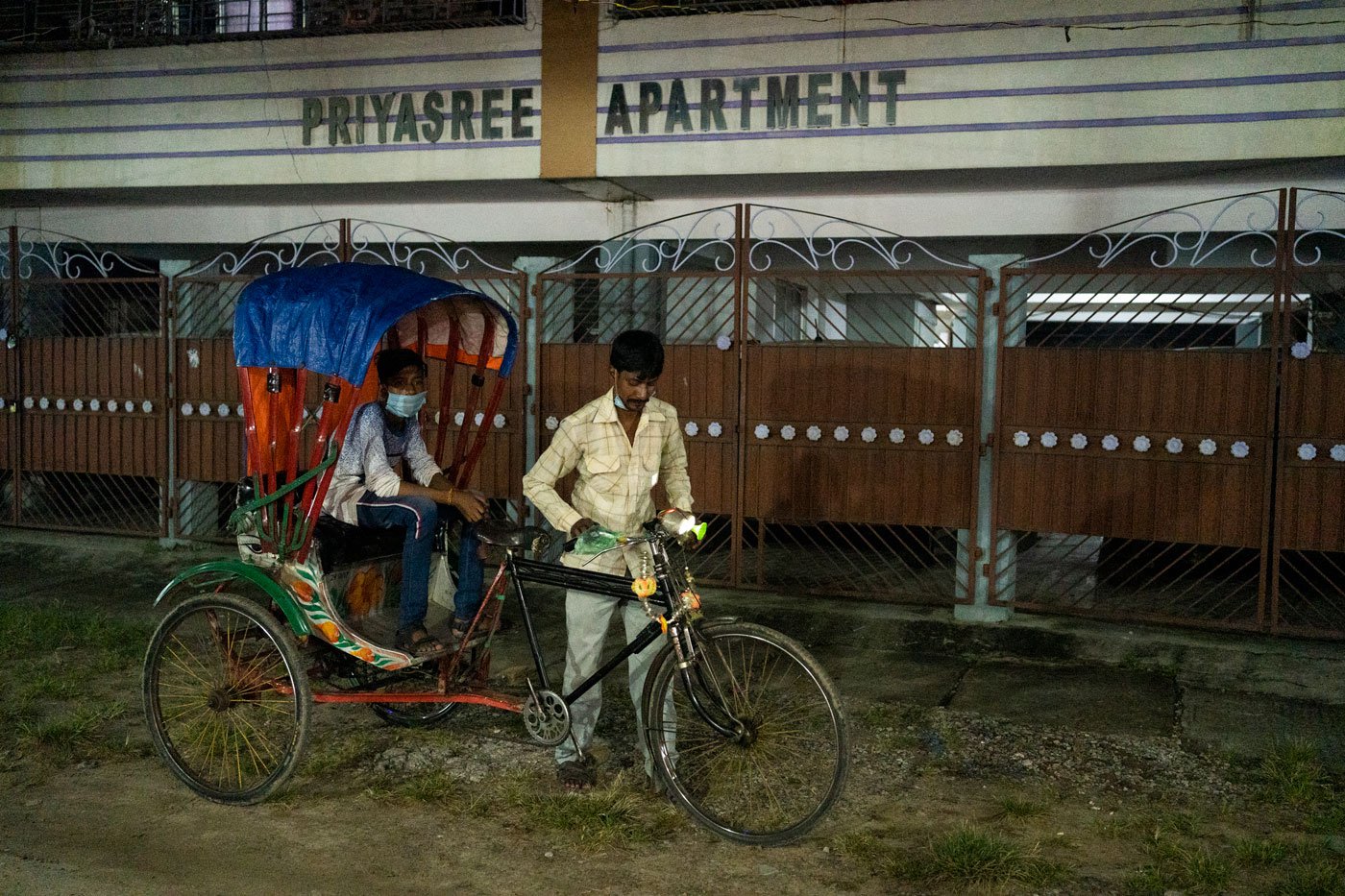 Keshab Rishidas plies a cycle rickshaw throughout the year and, during the Puja days or on other occasions, takes his son with him to play the dhol , which sometimes accompanies the dhak to fill the beats. He commutes to work on his cycle rickshaw 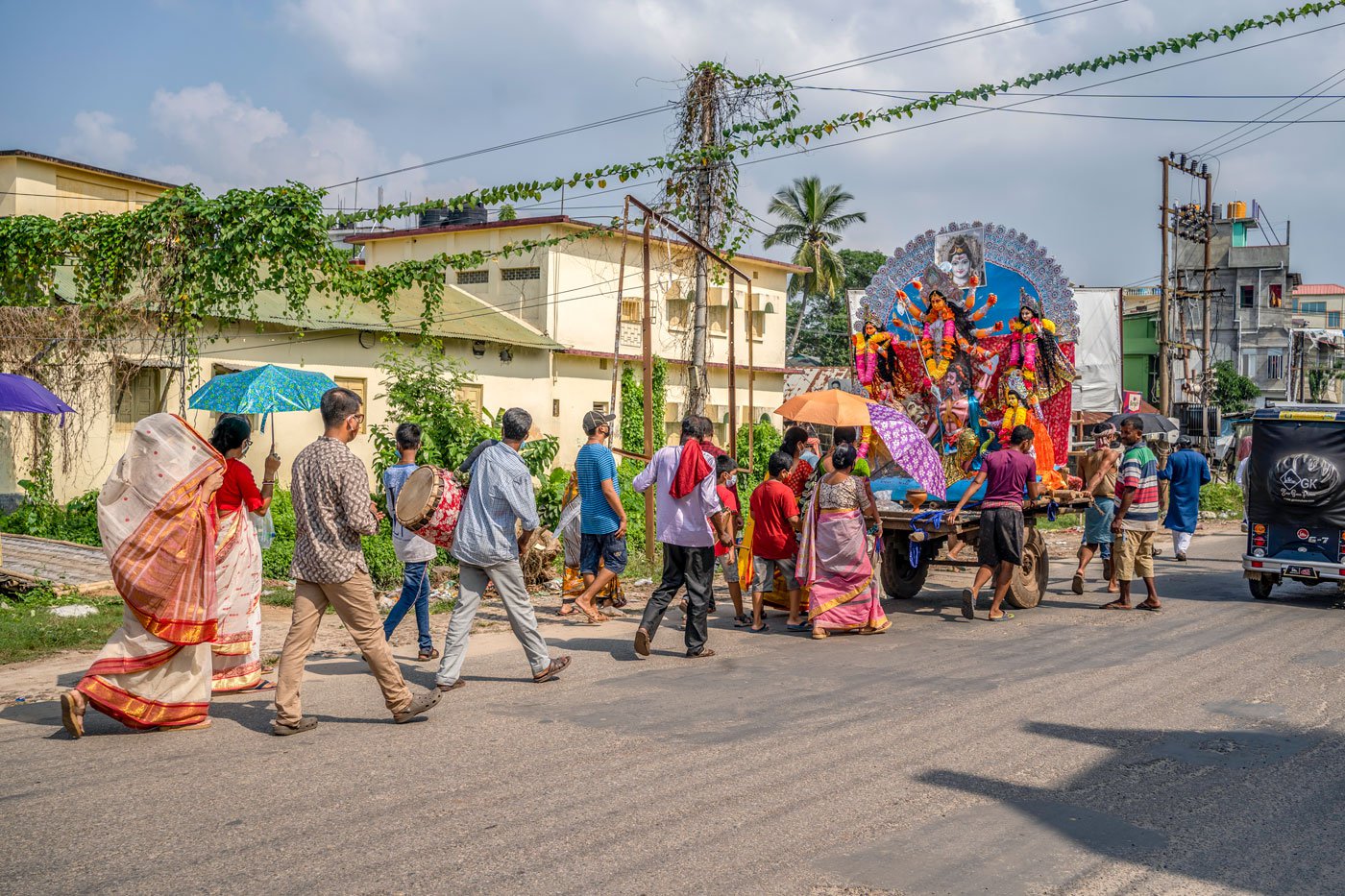 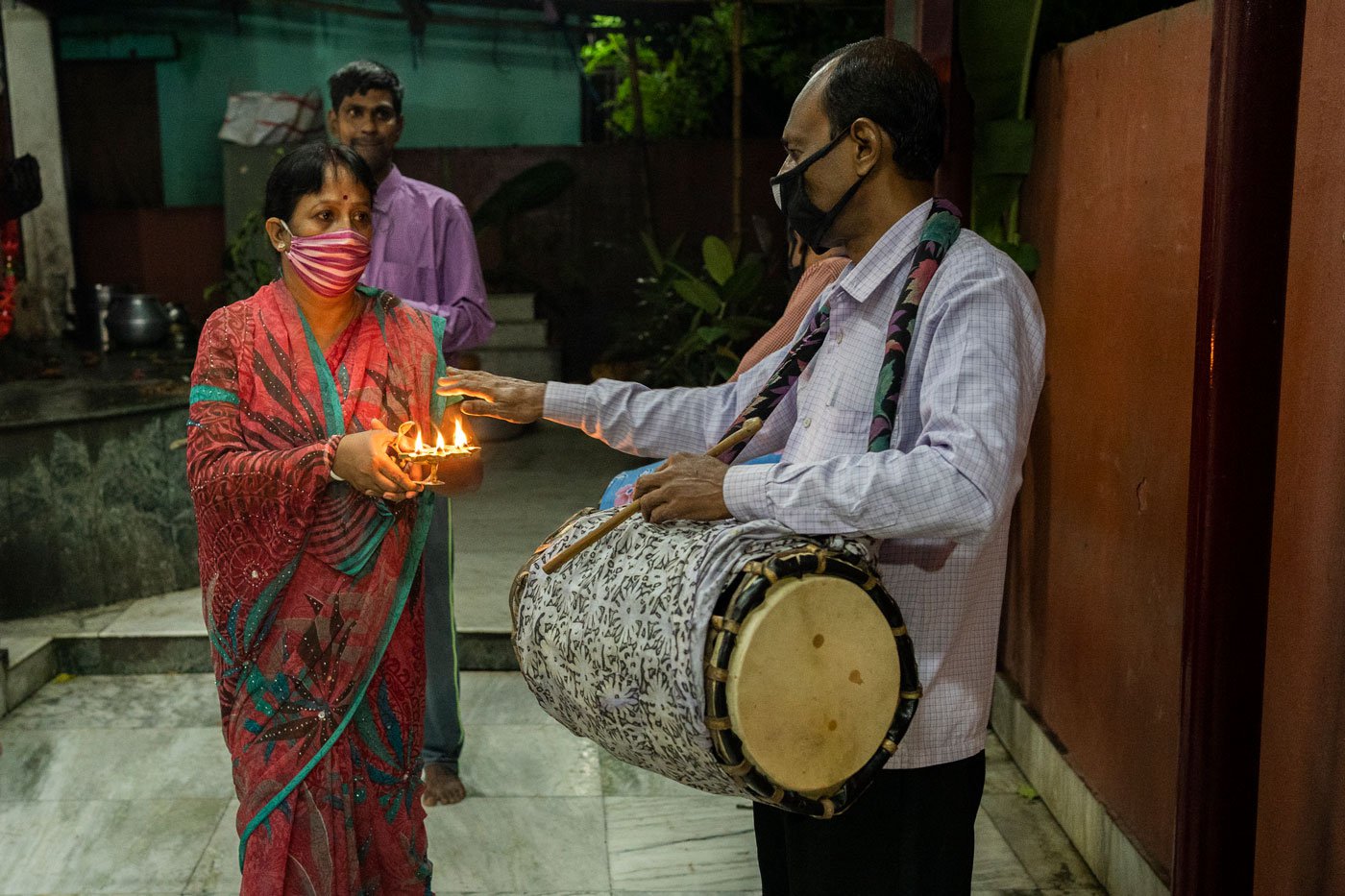 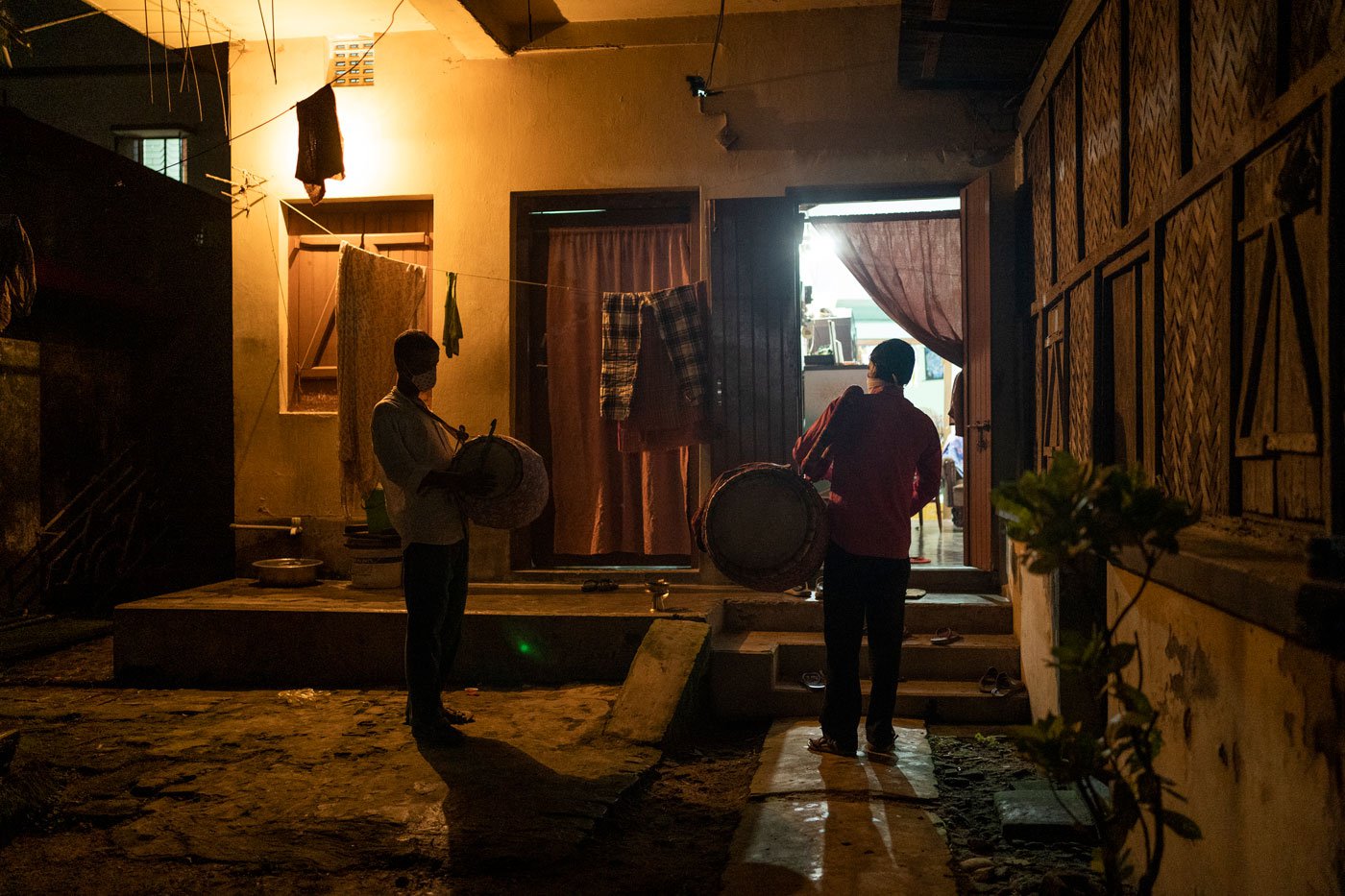 Some dhakis go out on the streets on the evening of Lakshmi Puja, beating their dhaks . When people hear them on the street, they call them to play at their homes. This is usually their last day of earning as dhakis 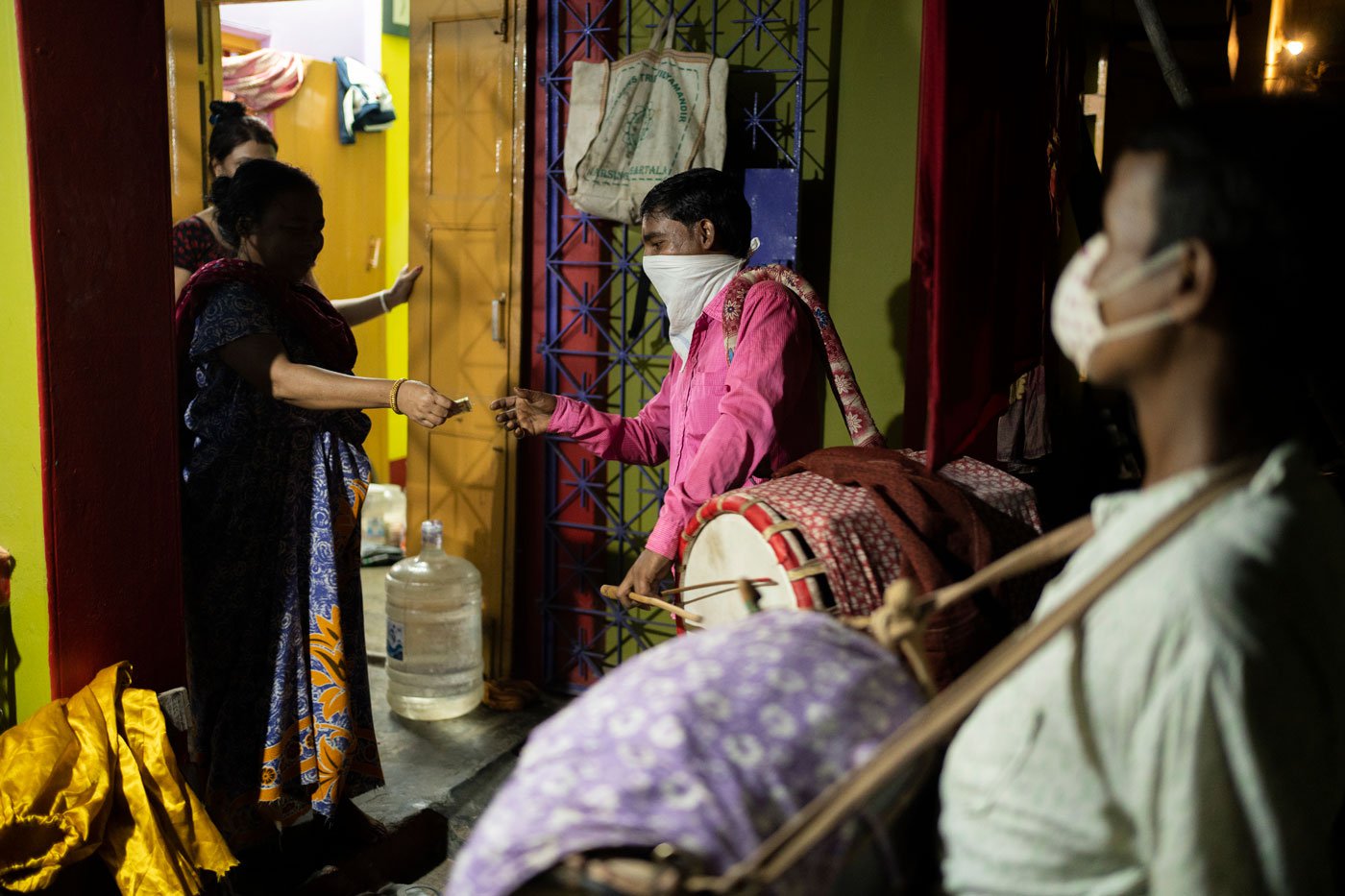 The dhakis walk from home to home, playing for about 5-10 minutes at each place, earning Rs. 20 to Rs. 50 at each stop 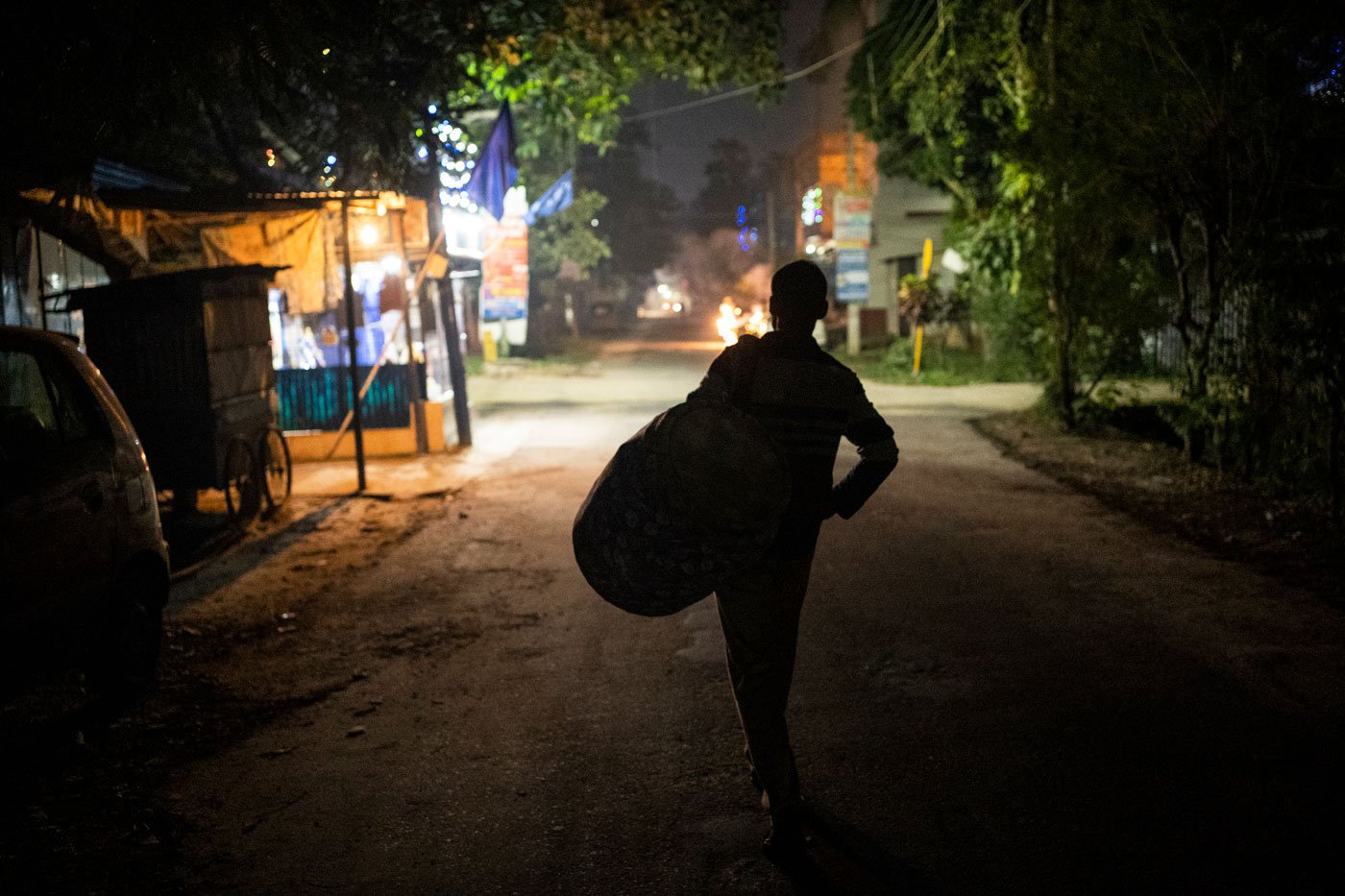 Rajiv Rishidas heads back home around 9 p.m. on the night of Lakshmi Puja. “I don't really enjoy this [going home to home playing the dhak ],” he says, “but my family asked me to go since it will help us earn some extra money” 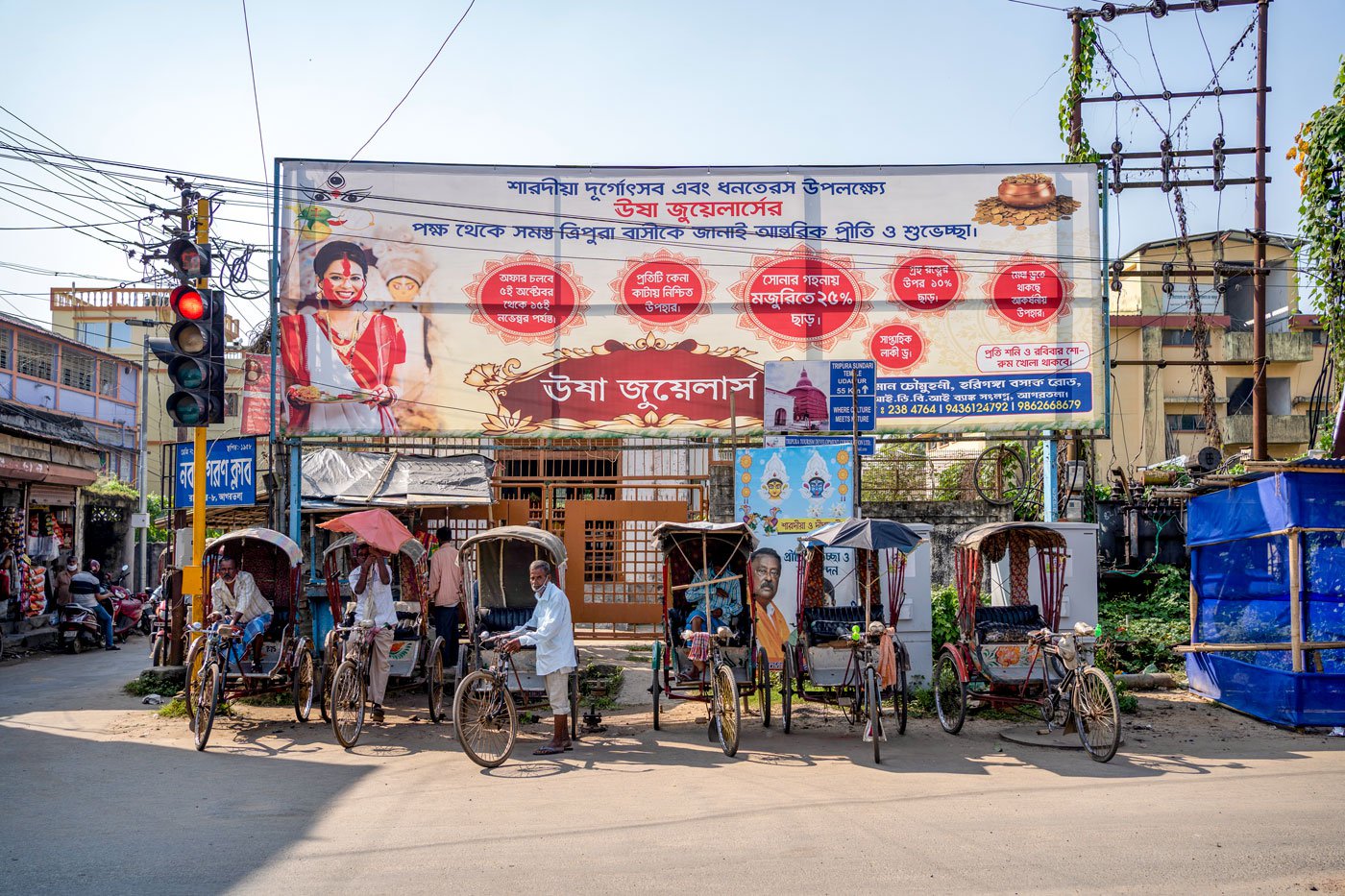 When the Puja season ends, most of the dhakis return to their regular jobs. The Durga Chowmuhani junction is one of the spots where they wait with their rickshaws for passengers throughout the year

Sayandeep Roy is a freelance photographer from Agartala, Tripura. He works on stories about culture, society and adventure, and is an editor at Blink.

Other stories by Sayandeep Roy