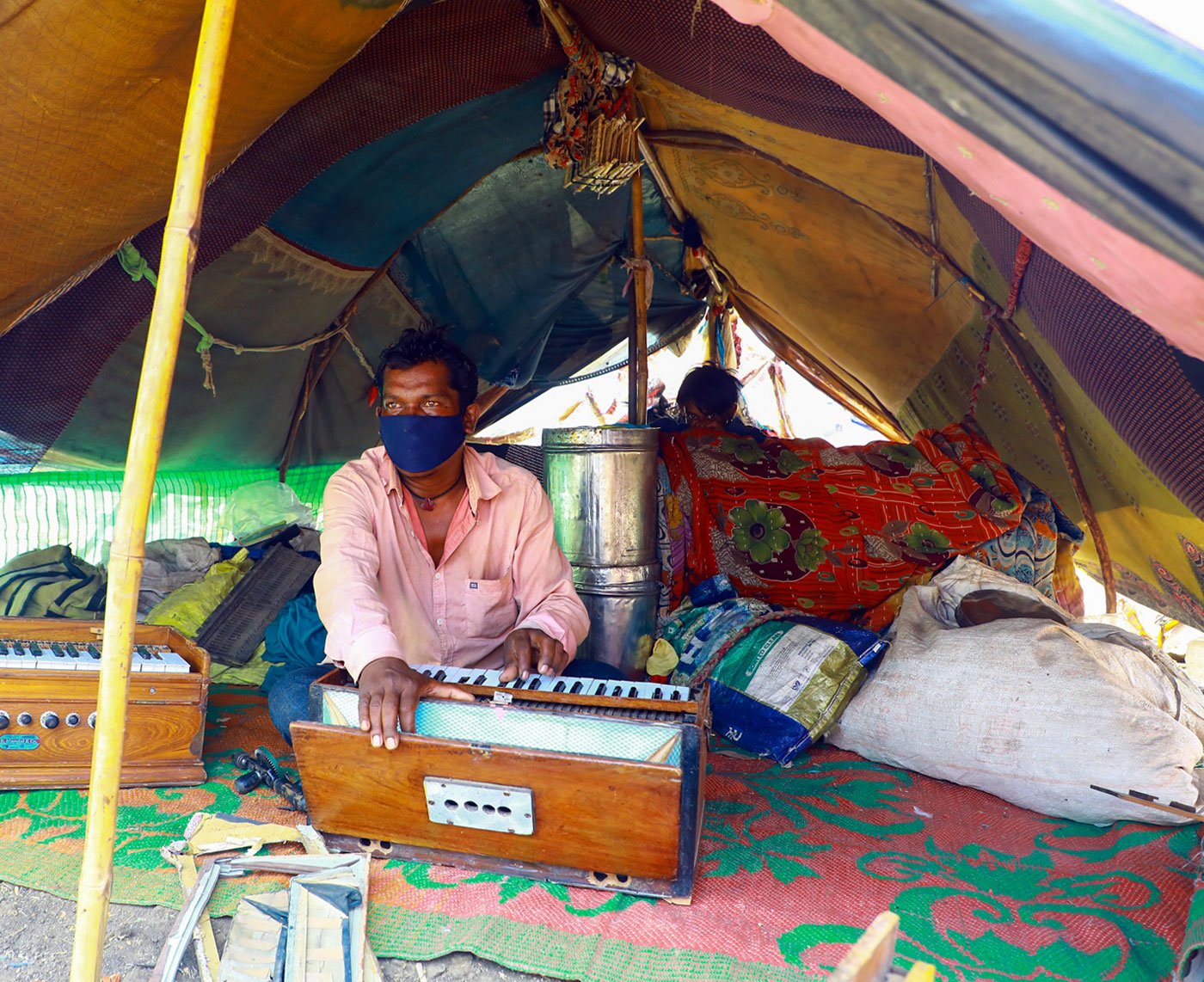 “The harmonium is our life and lifeline, our farm and our home.”

That’s 24-year-old Akash Yadav speaking, while pumping the bellows of a harmonium to test it for air leaks. He loosens the keys and turns them upside down to clean them, and continues, “We barely manage one meal. We helplessly watch our children – who do not even complain – sleep hungry. This is the most cruel and traumatic time of our lives, this lockdown.”

Akash and his 17 fellow repairmen here are a rare group – one that journeys from Madhya Pradesh to over 20 cities and towns in Maharashtra from October to June every year – repairing harmoniums. That’s a job demanding great skills, including a heightened sense of classical music – and extraordinary hearing ability.

They are called petiwallahs in most places they go because of the harmoniums and toolboxes they carry. All of them are Karahirs – a sub-group of the Ahir or Gawli communities in Madhya Pradesh, within the (OBC) Yadav caste cluster.

Akash was speaking to me in Renapur, 18 kilometres from Latur town in Maharashtra. All 18 harmonium-tuners have their families with them, totalling 81 people. The lockdown saw them stuck in tents on an open ground that the Renapur municipal council had permitted them to occupy.

They are from Gandhigram in Madhya Pradesh’s Jabalpur district, a village of 940 people (Census 2011) in Sihora tehsil . “If this illness [Covid-19] continues to pose restrictions on travel, we will die. We have no money. Before we begin journeying, every year, we keep all our important documents with neighbours in our village as we live in kachhe ghar [mud houses] there. So we don’t have our ‘yellow’ ration cards on us. We are starving here. Can you please request the authorities to let us go back?” asks Akash.

'Tuning a harmonium requires extraordinary knowledge of swars and shrutis... swars are the 7 fundamental notes and the 22 shrutis are the gaps between swars'

Watch video: Dealing with dissonance – the harmonium tuners of Jabalpur

The group reached Latur on Rang Panchami (Holi), around March 15, just days before the lockdown was declared. “In those few days, I had earned barely Rs. 1,500,” Akash says. “It’s the same with many of the others. Now it’s been much more than two months and we are left with no money.”

Akash’s wife, Amithi, adds: “Forget food, getting clean drinking water is a challenge. I couldn’t wash clothes either, for more than a week, because there was no water. Renapur municipal council supplies water once a week. I walk down half a kilometre to the nearest public water tap. We do not have storage capacity here that can last for a week.” So they make that walk several times on that water-supply day. “We cannot even feed our daughters on time.” Her younger child Yamini is just 18 months old.  Her older daughter, Damini, 5, she says, has to dip biscuits in water and eat those as a meal sometimes.

In this group of 81 there are 18 men, 17 women and 46 children under the age of 16. The women take care of all the families. “Men do the harmonium repairing work,” says Akash. “We sometimes earn Rs. 6,000 a month – sometimes just Rs. 500. Tuning fetches around Rs. 1,000- 2,000 per harmonium, whereas other minor services such as fixing leakages, checking bellows, restoring the leather, cleaning the keys and repairing the change scales, pull in around Rs. 500-700. Everything depends on the town we visit and the demand for services there.”

They travel from Jabalpur to Maharashtra every year between October and June, with their families, and are at home without a break only during the monsoon. They have been visiting Maharashtra every year for 30 years, following the same route – starting with boarding a train in Jabalpur for Bhusawal in Jalgaon district. From there, they move on to at least 20 other cities and towns of this state, including  Kolhapur, Latur, Nanded, Nagpur, Pune, Sangli, Wardha and others. 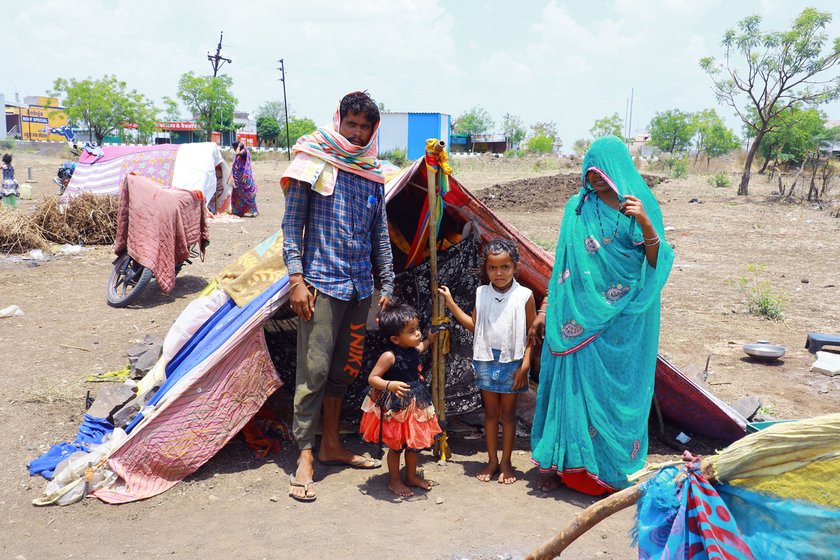 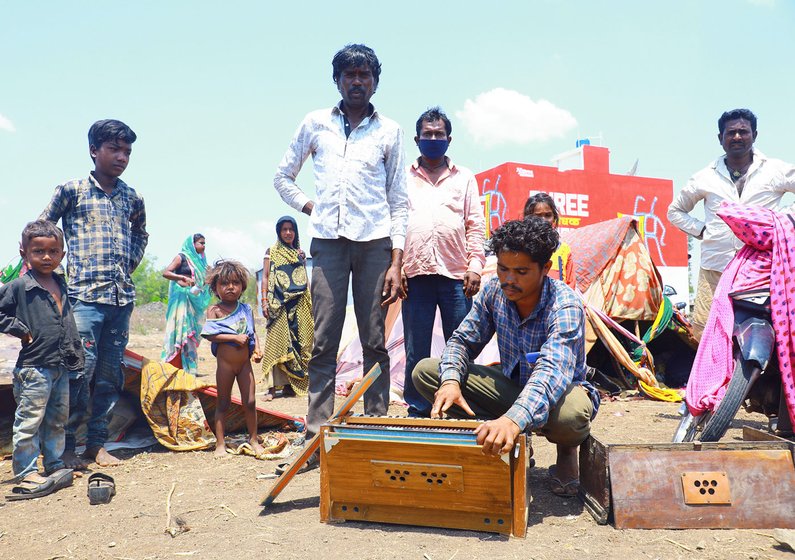 Left: Akash Yadav was stuck in Renapur with his wife Amithi, and daughters Damini and and Yamini. Right: Akash at work; his father Ashok (in pink shirt) looks on

Their luggage includes tents, a few utensils, some rations and food items – and the harmoniums and repairing tools. This burden increases their cost of travelling. Renting two minibuses, for 80 people, costs Rs. 2,000 for 50 kilometres. So they prefer to travel by train or walk. They walked, for instance – many of them barefoot – 136 kilometres from Nanded to Renapur, in about six days.

“But for this lockdown, we would have reached Amravati district in Vidarbha by now,” says Ashok Yadav, 50, father of Akash. “Another 150 kilometres from there and we would have reached the Madhya Pradesh border. Everything would have been fine and normal. I never thought traveling in my own country could devastate our lives.” The lockdown’s impact has exceeded even the many hardships of the life he describes as ‘normal.’

“We are at least surviving because of this noble organisation,” says Ashok Yadav. He’s speaking of the Latur-based Avartan Pratishthan that works for the dissemination of Hindustani classical music, which has stepped way outside its normal activities to help the tuners and their families. It raised Rs. 11,500 to provide each family with ration kits, which included 15 kilograms of wheat, 2 packets of biscuits, 2 litres of oil, some soap and other items.

“It is our duty to protect the preservers of classical music,” says Avartan founder and music teacher Shashikant Deshmukh.

How did they come to be harmonium repairers? “My son Akash represents our fourth generation in this occupation,” Ashok Yadav told me. “My grandfather was the first in our family to take up tuning and repairing harmoniums – a skill he learned from musical instrument shop owners in Jabalpur 60-70 years ago. In those days, far more people were into classical music and playing harmoniums. This skill earned our landless family a living.” 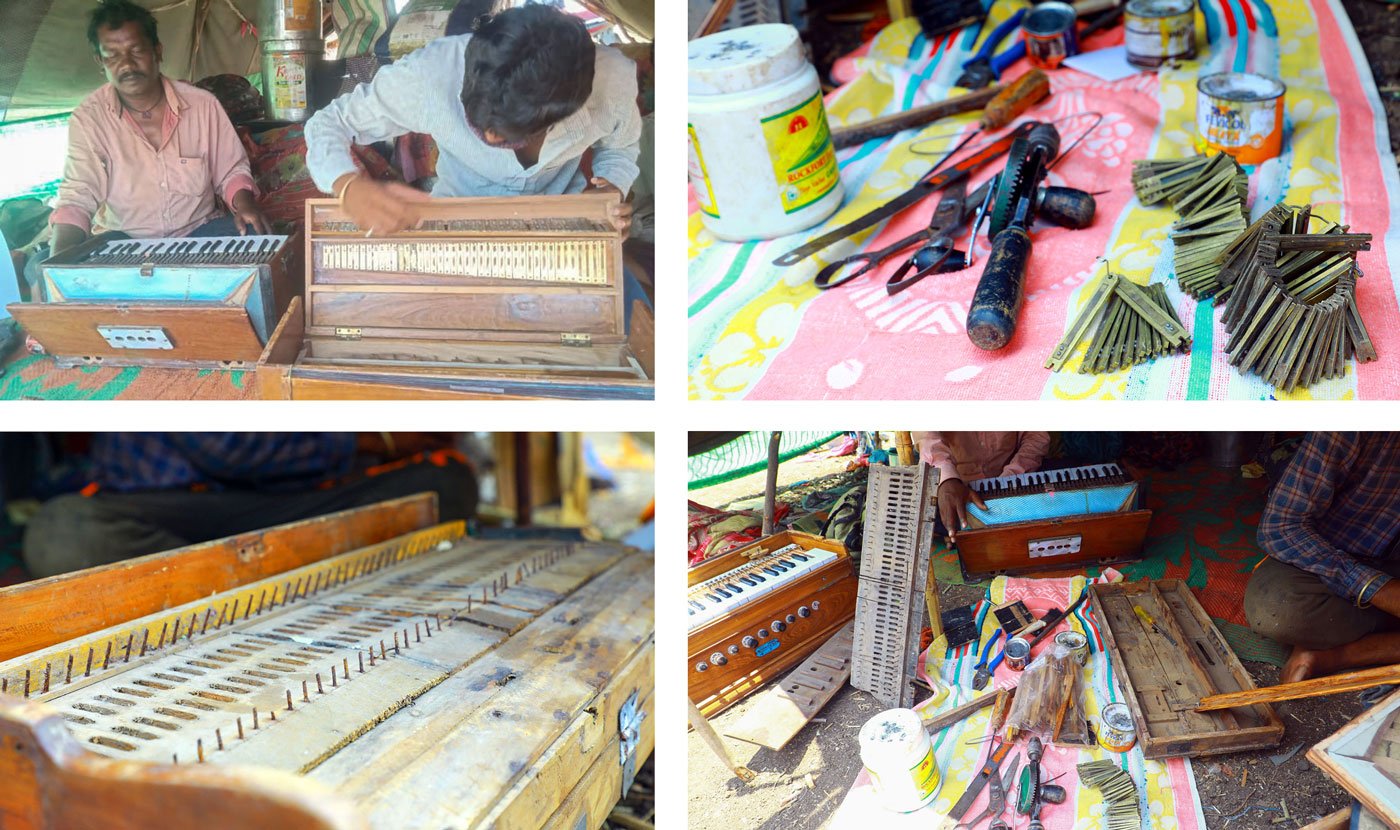 Top left: Ashok Yadav looks on as a younger repairmen grapples with a problem. Top right: Tools and metal keys to be polished and cleaned and repaired. Bottom left: A harmonium under repair, stripped off its keyboard and keys. Bottom right: Ashok and Akash demonstrate their work

The harmonium, an instrument of European origin, entered India sometime in the late 19 th century. The first Indian version – with hand-operated bellows – appeared in 1875. And rapidly became one of the most used instruments in the north. So Ashok Yadav’s family has been associated with the harmonium for almost half the period of its existence in this country.

However, says Ashok, in the past few decades “other instruments gained more popularity.” With that, the harmonium and the fortunes of the repairmen, declined. For a decade now, they also work as labourers, he says, mainly on farms, especially when back in their villages in Jabalpur between June and October. The daily wage there, he says, is Rs. 200 for men and Rs. 150 for women – and they get that for a limited number of days. Here, in Latur, they could earn Rs. 1,000 for repairing a harmonium on a single day – though such days too, are limited.

Why tour only Maharashtra every year? They were visiting states like Chhattisgarh and Gujarat some decades ago, says Ashok Yadav, but income from those places declined steadily over the years. So for the past 30 years, Maharashtra has been their sole market.

“No other state has such a good and consistent demand for our services,” says Ashok. Their best earnings he says, come from the Kolhapur-Sangli-Miraj belt, which “has a huge market for Indian musical instruments, including the harmonium. Pandharpur and Pune also give us good income.” 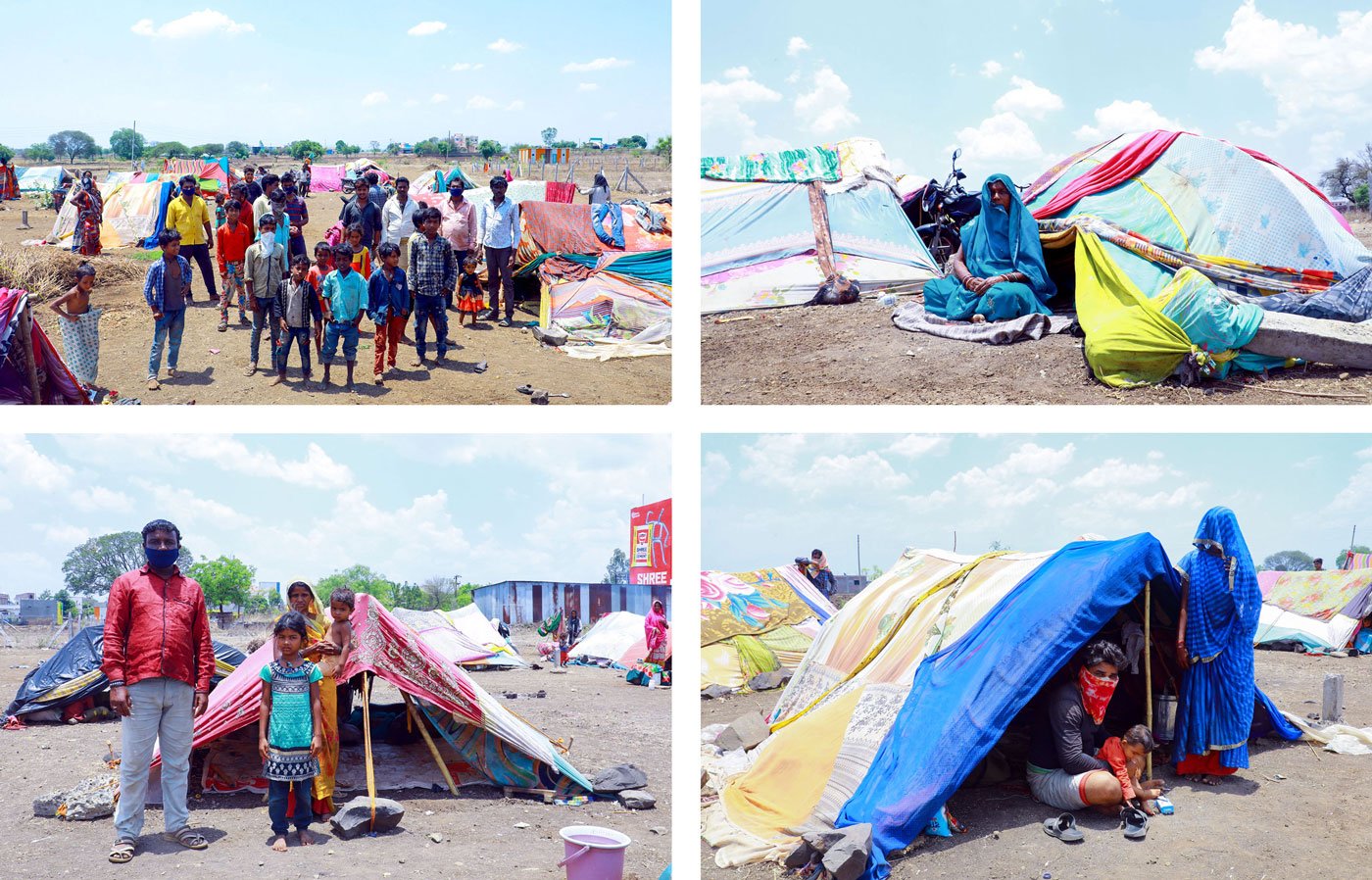 “Tuning a harmonium requires extraordinary knowledge of swars and shrutis,” says Shashikant Deshmukh of Avartan . " In Indian classical music , swars are the seven fundamental notes and the 22 shrutis are the gaps between swars . Understanding the variations of every swar and shruti and then tuning it to match it with the vocals, requires great expertise on frequencies, pitches, rhythms and layas [tempos of rhythm]."

“Another crucial factor,” adds Deshmukh, “is having very sharp ears to listen and sense the differences in micro-level variations. This skill is rare as it demands perfection in reaching the swar-kendra [epicentre of the swars ]. These people are perfectionists. They have a long legacy of knowing the science of the harmonium. It is our duty to protect these preservers of classical music.”

“Nobody values Indian classical music anymore,” says Ashok Yadav, sadly. “This country’s very own art is losing magnificence and fame with time. These days people keep aside this beautiful instrument, preferring to use keyboards or computerised machines [like electronic or digital computer organs]. What will our future generations do to fill their stomachs?”

Akash, while giving the keys he is repairing a finishing touch, asks: “When there are air leaks in the harmonium, we fix it. Ignoring the problem, will only make it dissonant and inharmonious. Does this not apply to our country also?”

Postscript: On June 9, Ashok Yadav told me on the phone that they had reached Gandhigram village in Madhya Pradesh, and after reaching here, received 3 kilos of rice per family. And all of them have been ‘home quarantined’. They have no work at all to look forward to and are hoping they will receive financial support from the government.