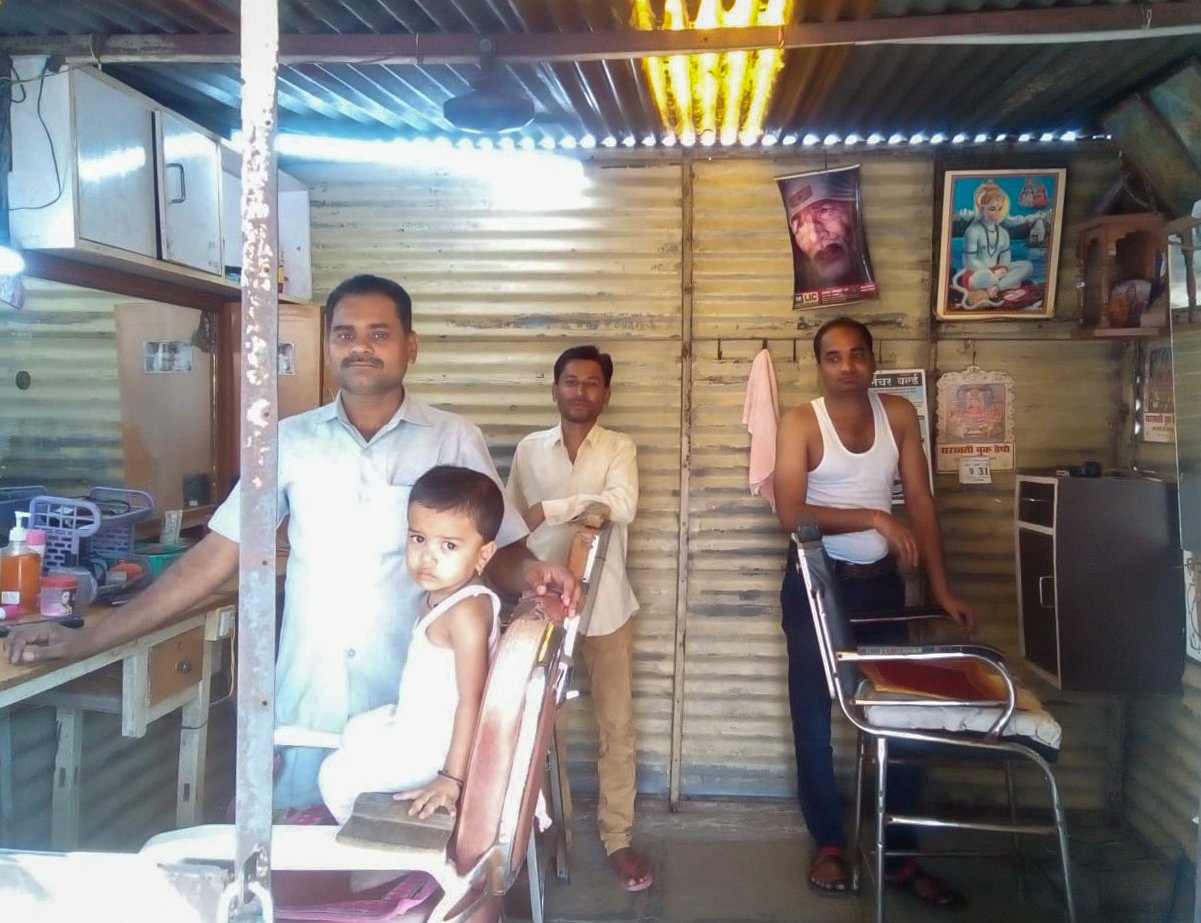 Barbers in lockdown: a hair’s breadth from ruin

In Latur district of Marathwada, the lockdown has severely hit barbers – they rely entirely on daily earnings, and for them the idea of physical distancing from their clients is unthinkable

apne aage sabhi jhuke hain, kya raja kya sainik'
( ' Whether worker or owner, whether a leader or the public
Before me, everybody bows their head, b e it king or be it soldier')

Those lines from Sahir Ludhianvi’s brilliant lyrics in the song ‘Tel Malish’ from the 1957 film Pyaasa , offered some pride to that neglected and much discriminated against community – barbers.

Their present-day condition in Latur district under lockdown – and indeed across Maharashtra and all of India – strips them of any vestige of that pride. It’s a double hit for an occupation that relies entirely on daily earnings – and for whom the idea of physical distancing from their clients is unthinkable.

“The lockdown is a threat to our survival. I don’t know how I am going to feed my family these next 10-15 days,” says Uttam Suryawanshi, 40 (left in cover image on top, with nephew Arush). He is a barber from Gangapur, a village of around 6,000 people, 11 kilometres from Latur city.

“In my village, 12 families are totally dependent on this business. We cannot eat unless we earn,” says Uttam, explaining their vulnerability during lockdown. His salon has three chairs, the other two serviced by his brothers Shyam, 36, and Krishna, 31 (centre and right in cover image on top). A haircut at the Suryawanshi Hair Salon costs Rs. 50. A shave, Rs. 30. A head massage Rs. 10 and a facial Rs. 50. Each of the three brothers pulled in around Rs. 300-400 a day before the lockdown began on March 25. 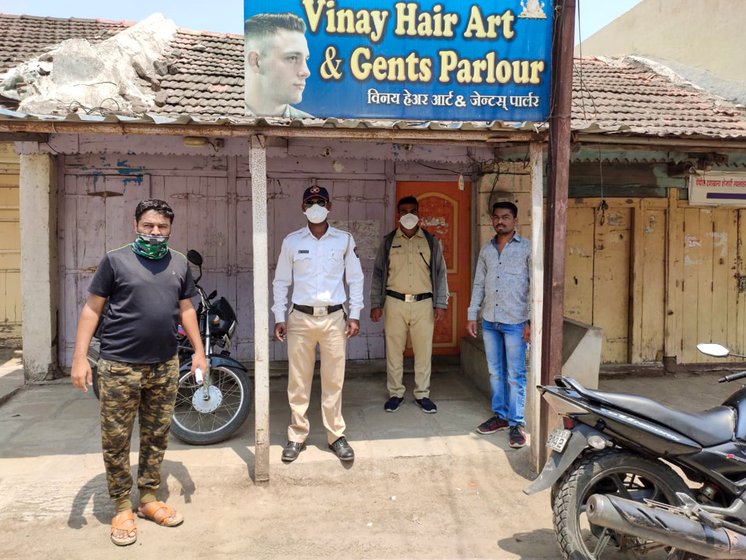 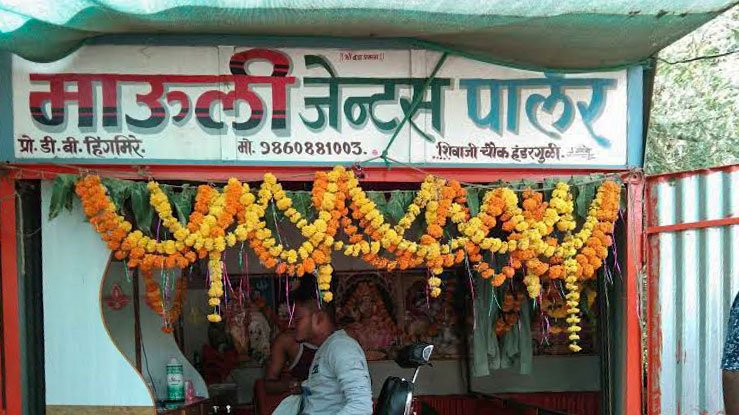 Left: Policemen outside a salon in Jalna town in Marathwada. Right: A pre-lockdown photo of Mauli Gents Parlour in Udgir town of Latur district

Feeding a family of four when work has completely stopped is a real challenge for Uttam. “What could be more agonising than having to shut down during this period of high demand?” he asks. Summer is the wedding season, he explains, and it offers barbers a chance of earning better and repaying the loans in which many of them are trapped.

“Since 2018, consistent drought in our region has restricted any price hike in our services,” points out Bhausaheb Shendre, chairperson of the Latur District Keshkartanalay Sanghatana (a unions of salons union. “Almost 80 per cent of us are landless and homeless,” he says. “We took the burden of a 15 per cent hike in house and salon rent in the same period. The cost of living is growing, while our income is dwindling. For us, losses are certain, livelihood is uncertain.

Shendre’s union is affiliated to the state-level Maharashtra Nabhik Mahamandal, a federation connecting the Nabhik (barber) OBC community in the state.  Mahamandal chief Kalyan Dale claims there are over 4 million Nabhiks in Maharashtra. There is, though, no official data confirming this. But rough projections of (very dated) figures suggest they run to several lakhs.

All salons remaining shut for 21 days implies losses of over Rs. 12.5 crores to this poor and oppressed community in just Latur district alone. 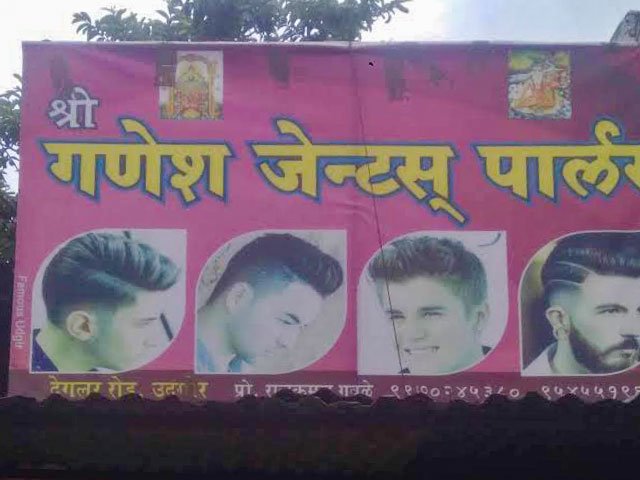 Barbers are totally dependent on their daily earnings, which vary with the number of clients walking in on a given day... None of them has any savings, many are in debt. And now the lockdown has hugely increased their vulnerability

‘Barbers who work with us are suffering to such an extent, they’re unable to manage one proper meal,” says Shendre. “Therefore, we have raised Rs. 50,000 and given kits worth around Rs. 1,000 each to 50 vulnerable families in the district. The kit includes 10 kilograms of wheat, five kilos of rice, two kilos of oil and one kilo each of masoor dal , sugar and peanuts. Plus one Dettol soap. We cannot depend on the uncertain free ration of three months declared by the government,’ says Shendre, in despair.

Barbers are totally dependent on their daily earnings, which vary with the number of clients walking in on a given day. Often, these humble artisans cater to the ambitious haircuts demanded by younger generations, at very low costs. None of them has any savings, many are in debt.

And now the lockdown has hugely increased their vulnerability. They have only two sources for raising loans: ‘new age’ finance companies that charge 15 per cent annually (though the final burden works out even heavier than that number suggests). Or private moneylenders charging 3 to 5 per cent interest, monthly.

Sudhakar Suryawanshi, a barber who lives in Khadgaon on the outskirts of Latur city, is struggling with debt. “The maximum share of my income goes in paying the tuition fees of my children,’ he says. (He earned around Rs. 300 a day before the lockdown). This January, he took a loan of Rs. 1 lakh from a moneylender at an interest rate of 3 per cent per month, for his children’s education. He had even paid the first instalment of Rs. 3,000 in March. His problems, though, had begun even earlier. 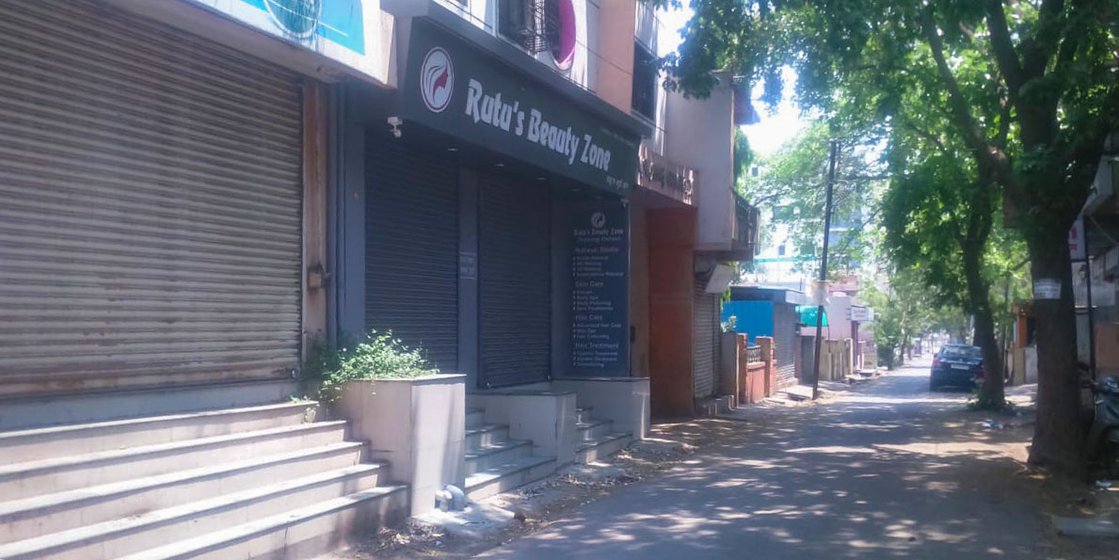 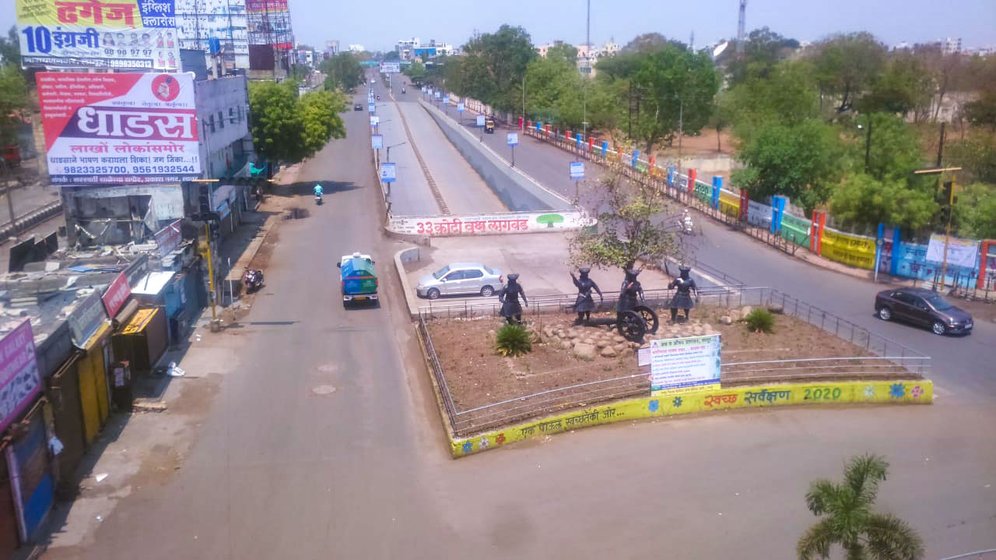 Left: Rutu’s Beauty Zone is one of 800 salons in Latur city. Right: The deserted main thoroughfare of the city

In December 2019, he says, “I received a call from my bank telling me that my jan dhan account had been cancelled.” This was odd in two ways. One: he had submitted every document required – PAN card, Aadhaar, ‘orange’ ration card and so on. Two: he had never received any money in that account, anyway. The ‘orange’ card is for those with an annual income of between Rs. 59,000 and Rs. 1 lakh in urban Maharashtra. His family’s ration card has the pradhanya kutumb (priority family) stamp on it, making them beneficiaries under the National Food Security Act.

“I have that ration card, but got nothing for this month. The grocery shop owner says that even he is unaware of when he will receive any stock,” Sudhakar complains. He is also clueless about how he will pay his rent in this period. In January this year, the landlady raised his rent from Rs. 2,500 to Rs. 3,000. The load keeps mounting.

He doesn’t take the media campaign on the coronavirus too seriously. “When we are struggling to have a single meal per day, how can we think of hand sanitisers and protective masks?

“For us crisis is continuous. Yesterday, today and tomorrow.”