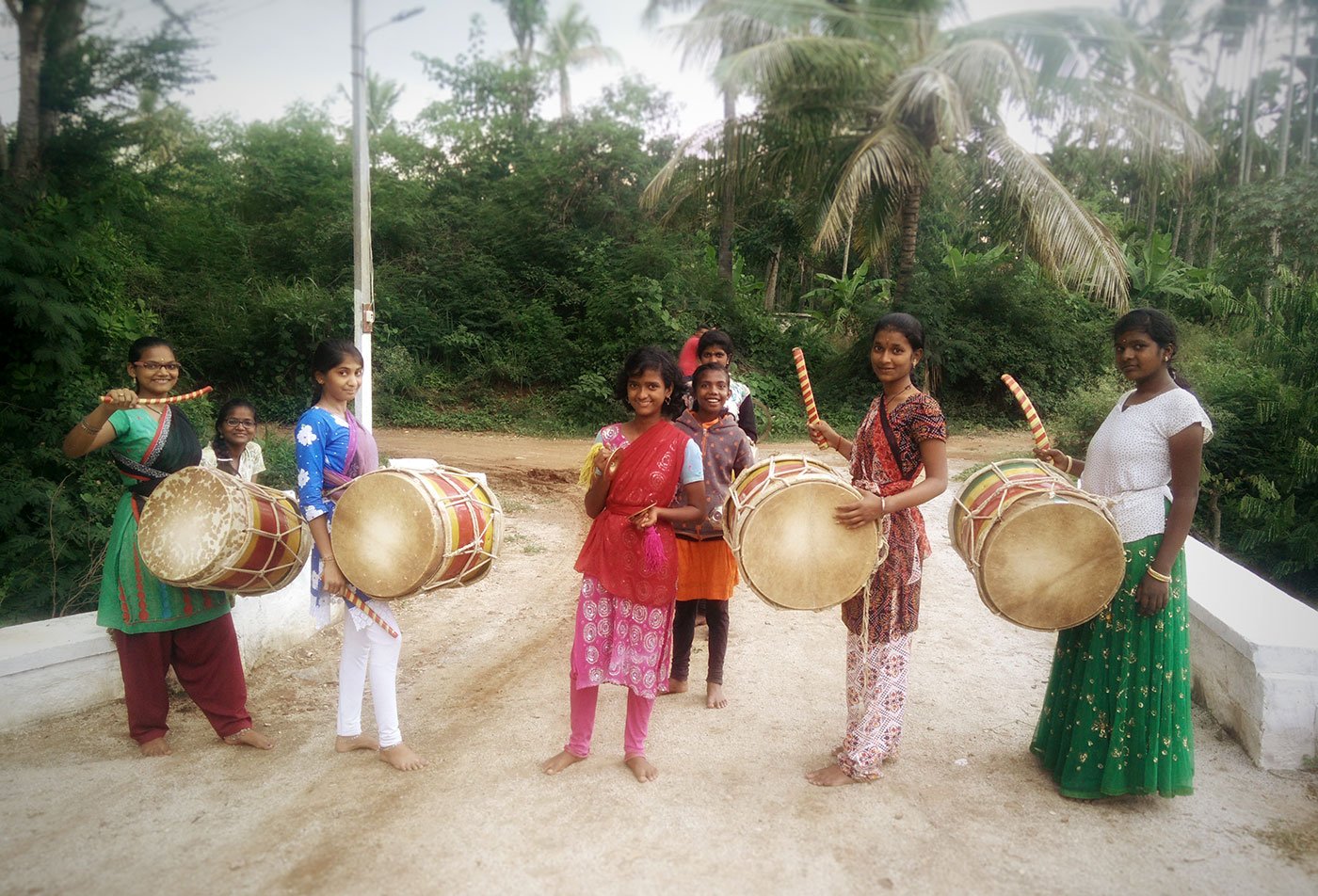 Dancing to the dollu in Hesaraghatta

Young women on the outskirts of Bengaluru excel at a Kannada drum-and-dance form long thought to be a skill for burly men. In the video here, watch the group perform with extraordinary energy and rhythm

"The boys aren't that good at dollu kunitha ,” says 15-year-old Vijayalakshmi, frankly.  “We are better.”

They do seem to be. Lightly-built girls, heavy drums tied around their slim waists, whirling around with the precision of seasoned dancers, the agility of acrobats. At all times in perfect, pulsating rhythm and sync.

They’re young girls. The oldest amongst them aren’t adults yet. But the energy and ease with which they pull off one the most physically demanding drum and dance forms is stunning. Dollu kunitha is a popular folk dance in Karnataka. Dollu refers to drums, while kunitha means dancing in Kannada. It’s also called gandu kale – “men’s skill” or “men’s art.”  Burly men strap a drum as heavy as 10 kilograms around their waist and dance in swift and sprightly movements.  Conventional wisdom holds that the dance requires the performers to be well-built men, high on strength and stamina.

Well, that is until some young women started to upend this tradition.  Right here in Hesaraghatta, a place full of paddy fields and gangly coconut trees out on Bengaluru’s edges, some 30 kilometres from the city centre. And tucked away in this green pocket is this group of girls who are changing a cultural norm.  Challenging the idea that dollu kunitha of this kind isn’t for women. They have ignored the hoary myth, and embraced the heavy drum.

Watch video: Girls from all over south India, helped by an organisation to move away from a life on the street, perform dollu kunitha with drums as heavy as 10 kilos

The girls are from all over south India. Helped to move away from a life on the streets in different regions and states, Sparsha, a non-profit Trust has given them a home and a second shot at life. They’re all receiving an education – and are also deep into dancing and singing.  They tear through school books during the week. On weekends they dance to their own drumbeats.

I’ve been waiting in the hostel where they now live. They troop in – a bunch of smiling faces. Surprising, how happy they look after a long day at school.

But before the drums, school-talk and dreams: “Physics is easy,” says Kanaka V., 17, originally from Tamil Nadu. Biology is the real struggle “because of all the English jargon it has.” She likes science, “especially physics because everything we learn is about our daily lives.”  Yet, “I have no long-term goals,” she says. And then adds, smiling, “I’ve been told that those who have no idea are the ones who achieve the most.”

Narsamma S., 17, says, “I love art. Drawing and designing are also my hobbies. I usually draw mountains and rivers. Growing up, I didn't have parents and used to pick waste. So, drawing nature is very calming. It helps me forget my past," she says. 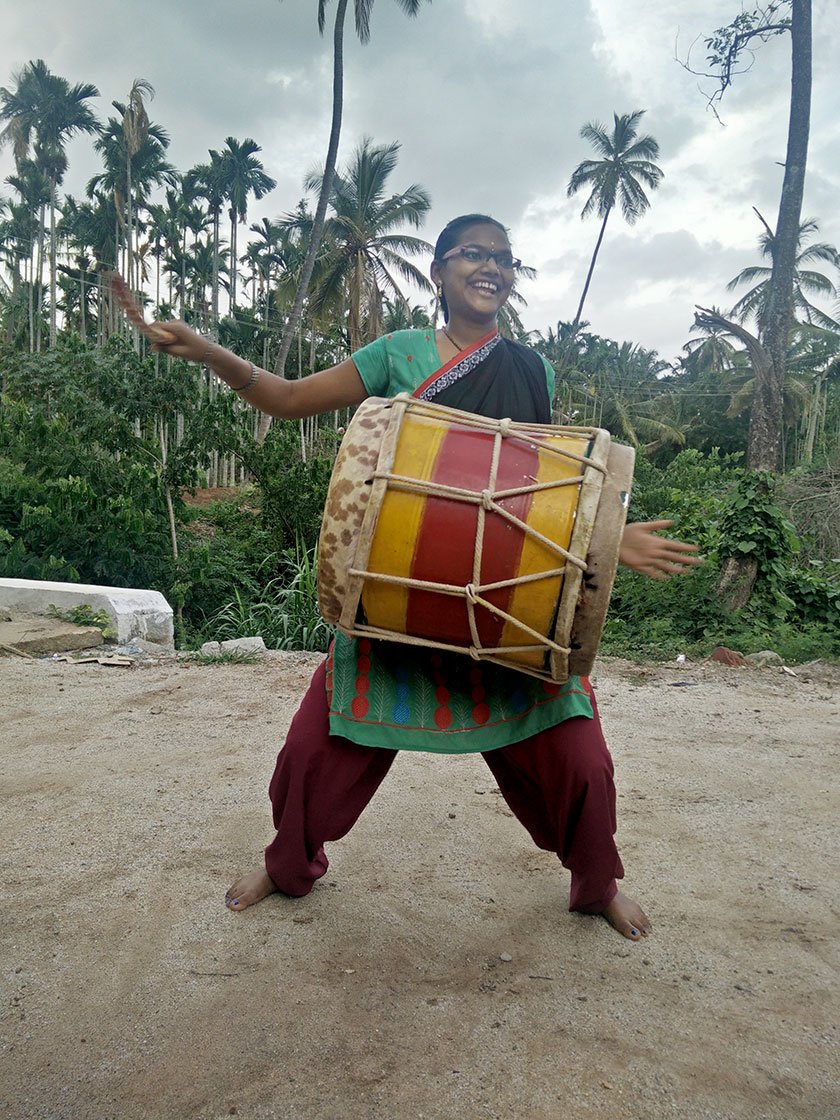 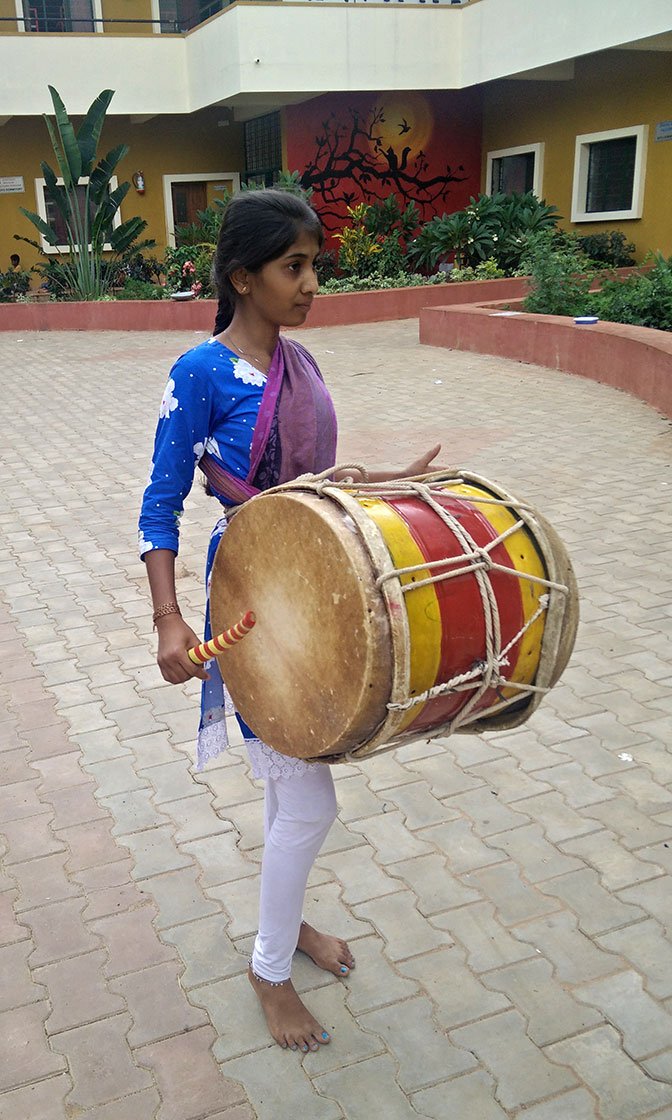 Narsamma (left) and Gautami (right) study during the week, but dance to their own drumbeats over the weekend

Narsamma was rescued from life as a garbage sorter at the age of nine from Chittoor in Andhra Pradesh. She needs no prodding to talk about her many goals. Fashion designing, nursing and acting, to name just a few. The moment in her new life she recollects with most pride is when she played the role of a parent fighting child marriage in a skit. “Why do parents do that to their children?” she asks. “It’s like plucking a flower in bloom.” 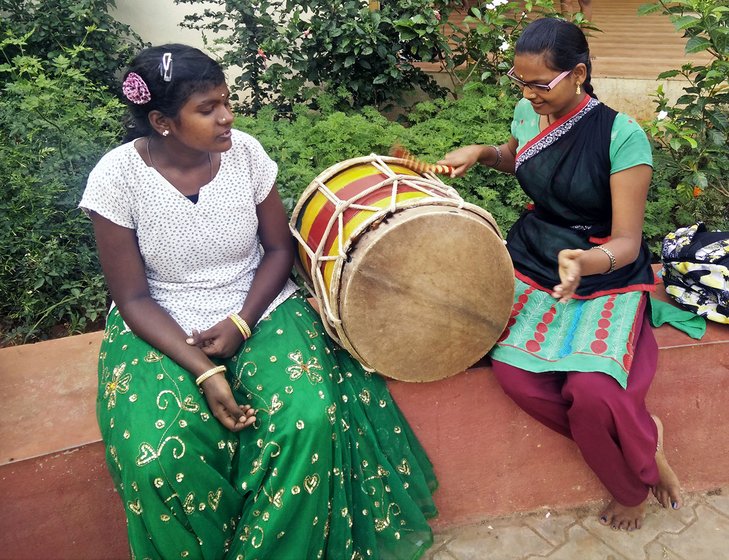 As they speak, they’re also getting ready to dance, with barrel-like drums being tied on to their small waists, drums seemingly half or more their size.

And then – an energy explosion.  A dance so physically demanding, it’s exhilarating to watch the seamless ease with which they move. Their energy is so palpable that I can’t stop myself from tapping my foot.

When they finish the dance, I, a mere viewer, feel a little exhausted just witnessing all the jumping. They show no tiredness, though, and have gone about the evening session like a stroll in the park.  This group is involved in dollu kunitha as a recreational and cultural practice. They have not, so far, been in public events or drawn an income from the performance. But they easily could, should they choose to.