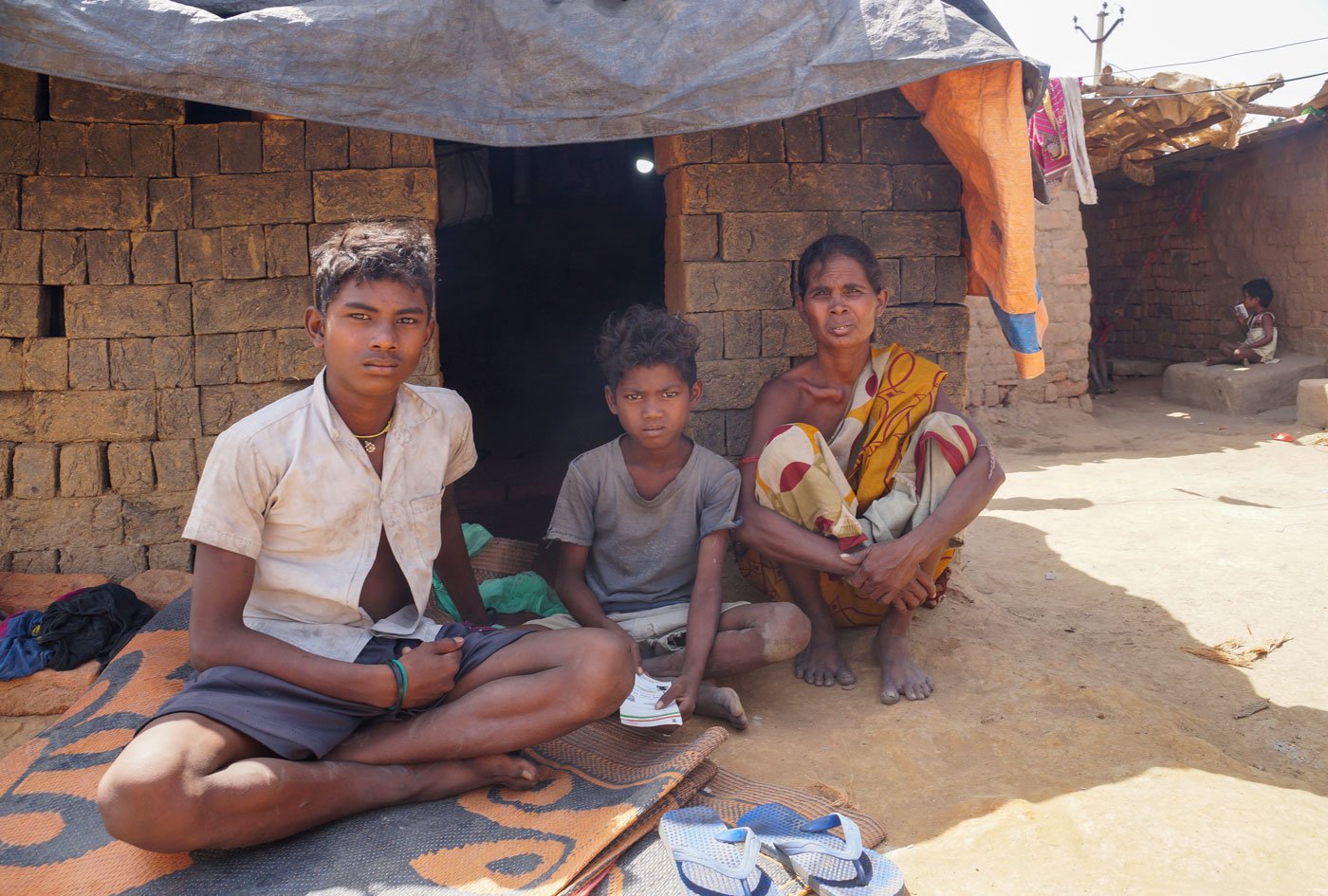 Another brick in Telangana's lockdown wall

Kuni Tamalia and other kiln workers in Telangana’s Sangareddy district continued their arduous work in the lockdown. But with kids to care for and Covid fears, they were anxious to board a Shramik Special for Odisha

“I don’t have a mobile phone, how can I register with the government?” asked Kuni Tamalia, a brick kiln worker in Annaram village of Telangana’s Sangareddy district. She wondered if we were there to register her name for a Shramik Special train that would take her and her children back home to Odisha.

Migrant workers must provide a mobile phone number to register their request for transport on the Telangana government’s website – and the Odisha government demands the same for returning migrants.

“And I left their Aadhaar cards in the village. Will they be allowed to get on the train?” she asked, looking worriedly at her sons, Bhakta, 15, and Jagannadh, 9. Kuni said she is around 40 years old, though her Aadhaar card says she is 64. “I don’t know what is written in the card; they just put it in the computer.”

She began working at the kiln in November 2019, and was supposed to finish her tenure at the end of May and return to Odisha. But the lockdown made everything uncertain for Kuni, a widow, who had taken up brick kiln work for the first time. She and her children were brought to Annaram, in Gummadidala mandal , by truck from Demuhani, their village in in Kantamal block of Baudh district.

A few weeks after Kuni came to Annaram with her kids, Sumitra Pradhan, 42, arrived there too from Odisha – with her husband Gopal Raut, 40, and their five children. They have been coming to the kilns from Sagadghat village in Balangir’s Titlagarh block for 7-8 years. Their eldest son, 20-year-old Raju, also works with his parents. Before they left home, the contractor gave them a total of Rs. 75,000 as advance for the three to work as brick carriers. 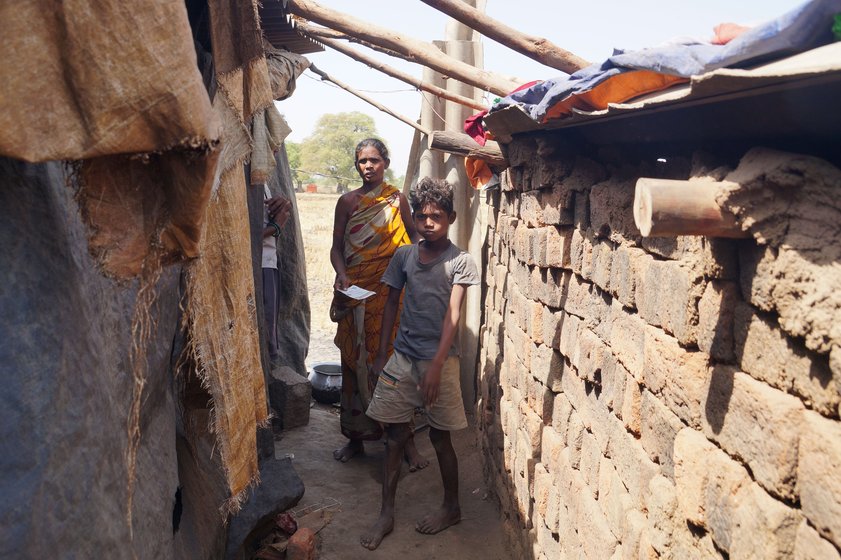 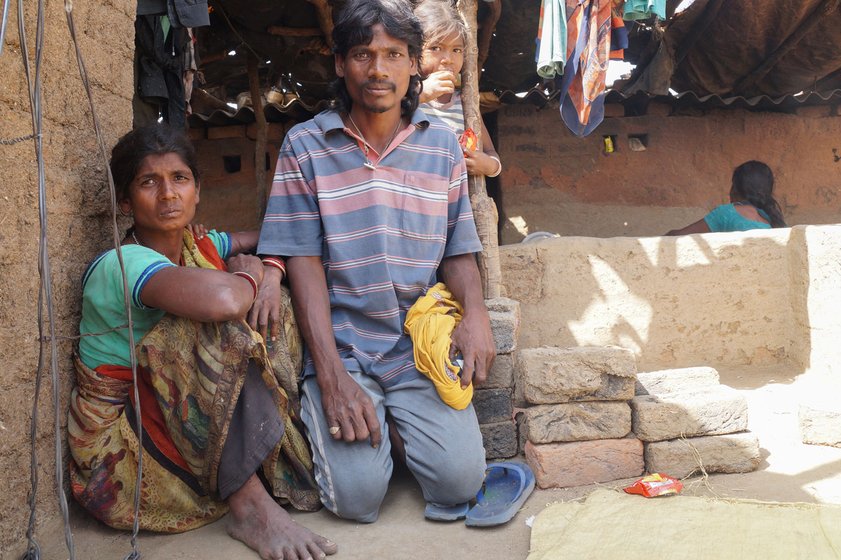 After a few months at the kiln this season, by March, as news of Covid-19 began emerging, Sumitra became worried about the virus. She feared that her younger children – Jugal, 9, Rinki, 7, and Rupa, 4 – would get infected. “We heard that corona affects children below 10 years. We want to go back, but the owner says we still have a week’s work left to finish before leaving for Odisha. Now we cannot even leave because we heard that we should register with the Telangana government for the train,” she said.

When we met the workers on May 22, the temperature in Annaram was 44 degrees Celsius. Kuni was on an hour-long break from her task of carrying bricks. She led us to her tiny shack of loosely stacked broken bricks – there was hardly room inside. An asbestos sheet served as half of the roof and a plastic sheet covered the other half, held in place with stones. It did very little to beat the temperature. While speaking to us, Kuni stirred leftover rice, still warm from the embers of a makeshift stove on the mud floor.

She told us she had been working from 6 a.m. to 10 p.m., six days a week, at the kiln. She got two breaks in her work day – an hour in the morning and two in the afternoon – to cook, bathe, have meals, and wash clothes and dishes. There were others in the kiln who got only one break. “Those are brick makers. I am only a brick carrier. They work continuously for longer stretches, making bricks. They get better pay than us. My work is easier compared to them,” she said.

Each trip to the kiln from the area where the bricks dried took roughly 10 minutes. In that time, Kuni would load, carry, unload the bricks and return to restack. The brick carriers moved swiftly without taking breaks. “Women can carry only 12 to 16 bricks per trip, but men can carry more, so they are paid more,” explained Kuni pointing to a woman carrying bricks on a plank balanced on her head. We saw men carrying about 17 bricks on each side, balancing the weight on their shoulders.

The kiln that Kuni works in is smaller than some others in Annaram. The workers, who all live on the premises, have barely any facilities provided to them. There are no toilets, and a cement tank is the source of water for all uses. “We bathe and wash here, near the tank, and relieve ourselves in the open area there,” Kuni said, pointing to a ground close by. “We carry the water from the tank for drinking and cooking.” 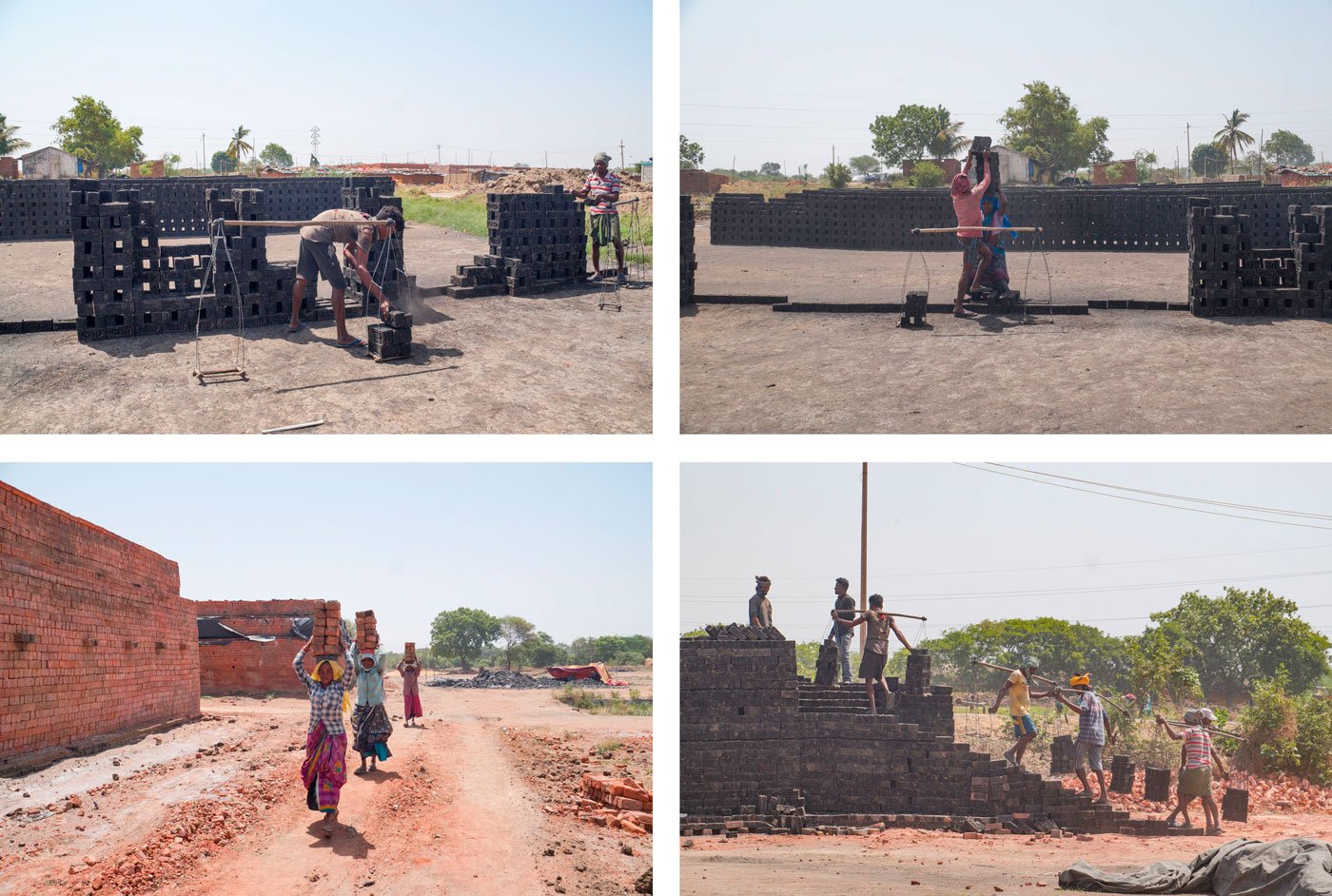 The brick carriers moved swiftly despite the blazing heat . Women carried 12 to 16 bricks per trip; men carried up to 34 at a time

Before leaving Demuhani in November, Kuni was supposed to receive an advance of Rs. 25,000 – Rs. 10,000 less than what the brick makers get. “But they gave me only 15,000. The sardar [contractor] told me that the balance would be paid when I finished work at the kiln in May. Here they pay me Rs. 400 per week for food and expenses,” she said. “After my husband’s death, it was difficult to feed my children.”

Kuni’s husband died last year, after being bedridden for a while. “The doctor told us that his knees were badly damaged. We couldn’t afford to buy medicine or give him the food that the doctor advised us to give,” she said, covering the vessel containing the watery rice porridge with an oversized aluminium plate.

Back in the village, Kuni earned Rs. 150 a day as an agricultural labourer in paddy or cotton fields. “But the work is irregular. I only get work when someone calls me. Living on it is tough as I have these two children to feed. The sa rdar comes to my village every year to take people to work in brick kilns,” she explained. “This is the first time I’ve come.”

Kuni and her children belong to the Mahar community, a Scheduled Caste. They were the only family from their district at their kiln in Annaram this past season. The majority of the 48 families at the kiln this year were from Balangir and Naupada districts of Odisha. Some were from Kalahandi and Bargarh. They were 110 working adults in all, with 37 children, living in the kiln from November 2019 till May 2020.

Back home, Sumitra, Gopal and Raju, who belong to the Jhala community, a Scheduled Caste, mostly work as tenant farmers from June to November. “We lease 3-4 acres of land to cultivate cotton or rice, depending on how much money we have. Sometimes, we work as daily wage farm labourers for Rs. 150 a day, but my wife gets only Rs. 120, as they pay women less for the work. That [combined income] is not enough for our family,” Gopal said. 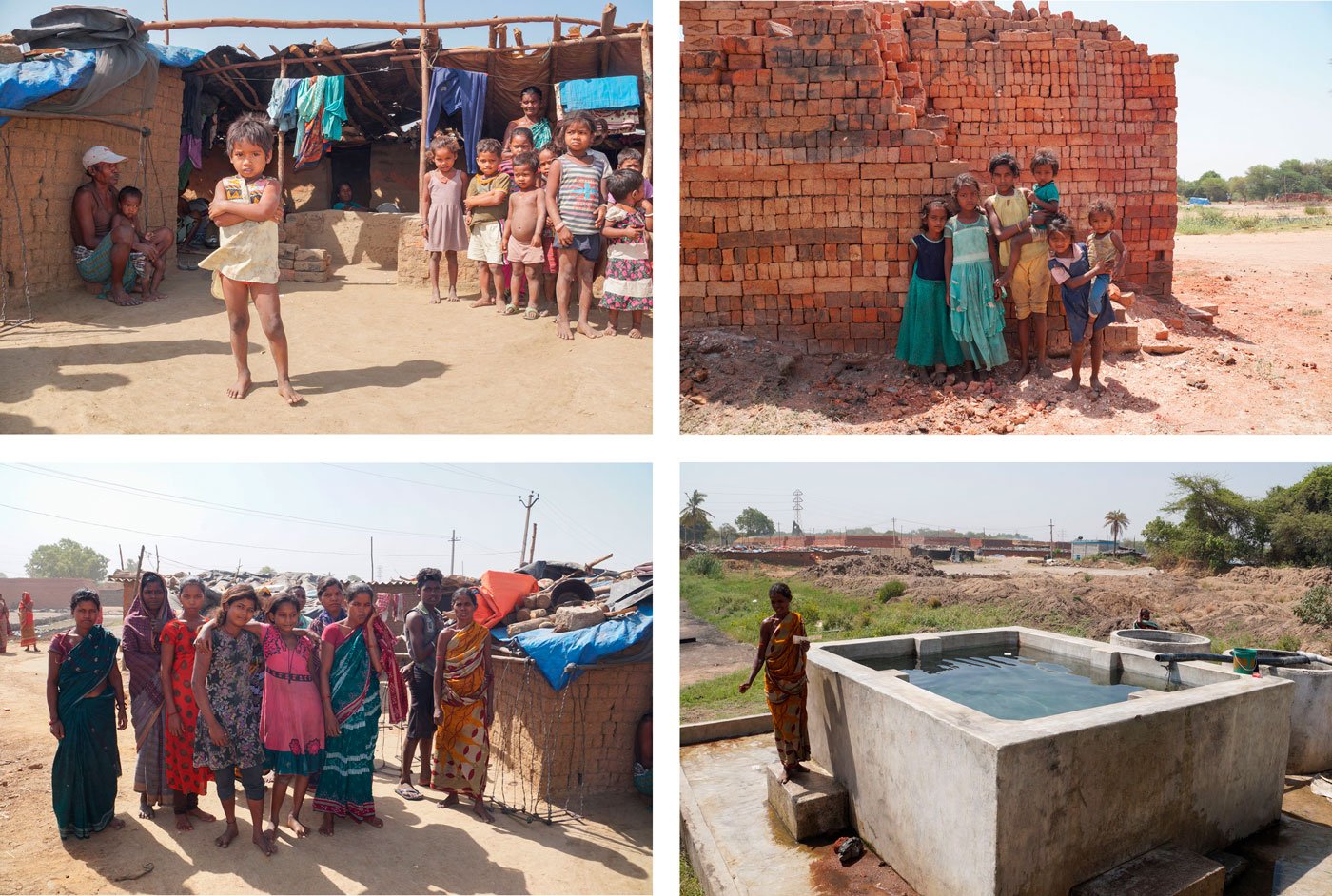 Children studied at the kiln's worksite school, which was shut during the lockdown. Bottom right: Kuni at the cement tank where the workers bathed and washed clothes, and filled water for drinking and cooking too

Sumitra’s worry about the coronavirus was evident among other parents too at the kiln, said Sarath Chandra Mallik, a teacher at the worksite school located across the road, run by the state education department and an NGO. “This [the virus] is a concern for all the parents here, as they have little children. They have heard that corona affects children and the elderly more than the youth. They remain in fear as they follow news or get information daily from their relatives about the rise in cases,” Mallik said.

At the school, the kids of kiln workers were given notebooks and a midday meal. But since the it was shut for the lockdown, the children’s parents had to arrange extra meals from their wages for about two months, till the end of May.

Kuni’s son, Bhakta, had dropped out of Class 8 to accompany her to Telangana; his younger brother Jagannadh left Class 3 halfway to make the journey. She brought her sons along because she couldn’t leave them in the village. “Besides, sardar said that my children could continue their studies in the school here. But when we got here, they refused to admit Bhakta,” she said. Kuni didn’t know that the worksite school only admitted children below 14 years of age, and Bhakta, at 15, would not qualify. So Bhakta helped his mother carry bricks, but he did not get paid for his work.

Sumitra’s second son, Subal, is 16, so he too could not attend the school. “He works at the chicken farm next to the kiln. He isn’t paid anything yet. But I think he will get his wages from the owner before we leave,” said Gopal.

Although Kuni was receiving Rs. 400 as weekly allowance during the lockdown, the closure of everything beyond the walls of their workplace hit their modest resources. “The broken rice for porridge used to cost Rs. 20 a kilo. Now it is selling at Rs. 35 in the shops,” said Kuni. In April, she received the state government’s relief materials for migrant workers – 12 kilos of rice and Rs. 500 cash per worker. But nothing came in May. 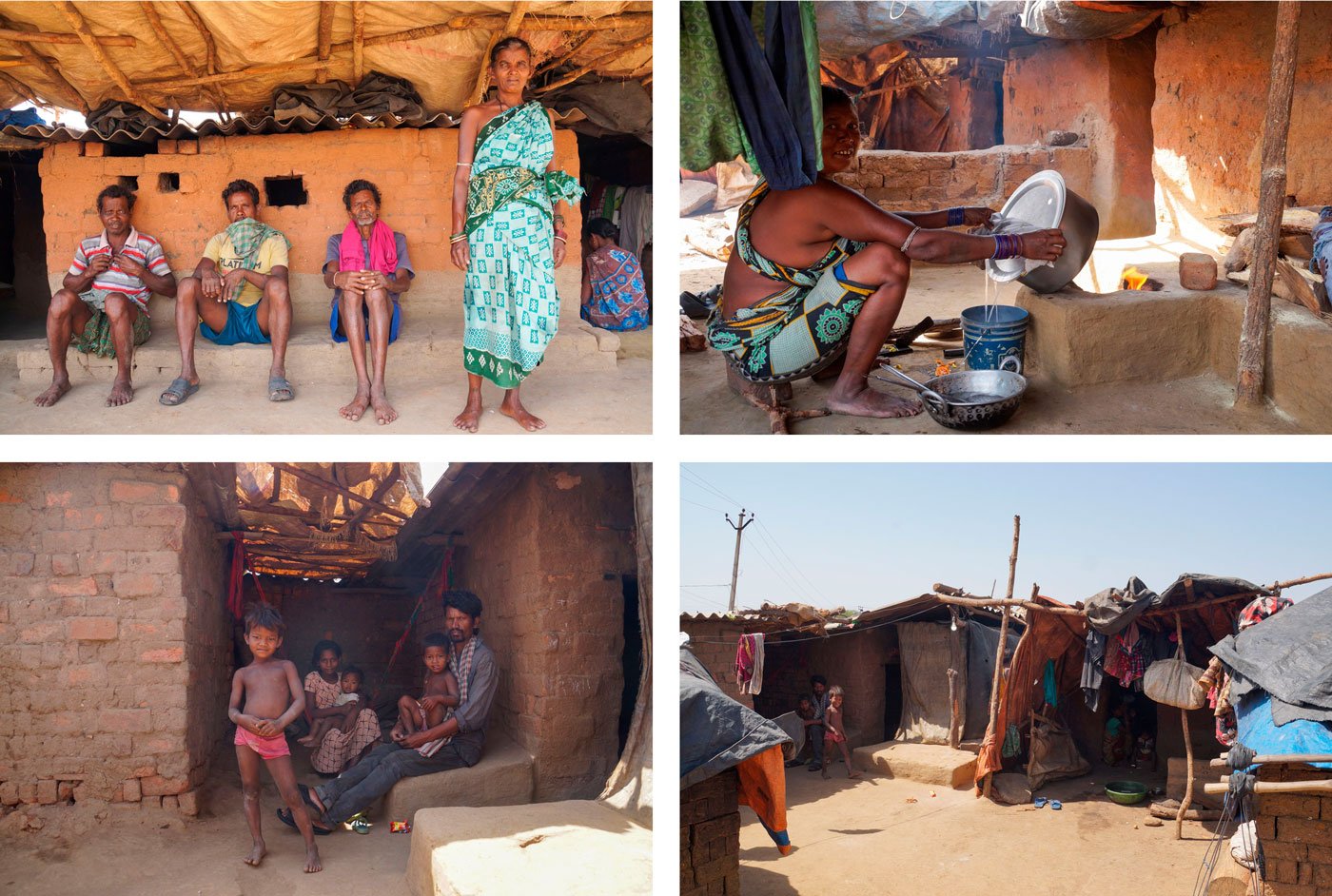 The 48 families working at the kiln lived on the premises with barely any facilities, and were waiting to return to Odisha

Sangareddy district’s additional collector, G. Veera Reddy, told us that after the government issued the order to distribute free rice and cash to migrant workers in April, they had received a circular from the chief secretary of the Telangana state government. “It said that the relief was not applicable to workers already drawing wages in brick kilns. The free rations were only for stranded migrant workers displaced during lockdown, who did not draw wages from their employers,” he said.

When asked about the dismal living conditions of the workers at the kilns, he replied, “There is a close relationship between the workers and employers, which the district administration would not like to tread on.”

When we visited the brick kiln on May 22, Pratap Reddy, a labour contractor, told us that the workers were looked after well. “We will send them as soon as they finish their work,” he said about their wish to go home.

But both Sumitra and Kuni were anxious to reach home at the earliest. “We will be coming again in November to the kilns. But we want to go back now because corona might affect our children,” said Sumitra.

Something else had been worrying Kuni during the lockdown: “The monsoons will start soon. If we don’t reach our village on time, we may not get work on the farms and will end up with no work or income there.”

Postscript: On May 23, a day after we met them, all the workers from the kiln were sent back to Odisha by a Shramik Special. On June 2, responding to a public interest litigation, the Telangana High Court issued an order to the state government to arrange to repatriate all migrant workers of Odisha.

One June 9, the labour commissioner of Telangana submitted a report to the court stating that 16,253 workers remain at the brick kilns, and that the kilns’ owners are providing them facilities. The advocate general of the state told the court that five Shramik trains were leaving for Odisha on June 11, carrying 9,200 migrant workers from Telangana. He also said that more trains would run from June 12 to take back the remaining brick kiln workers.