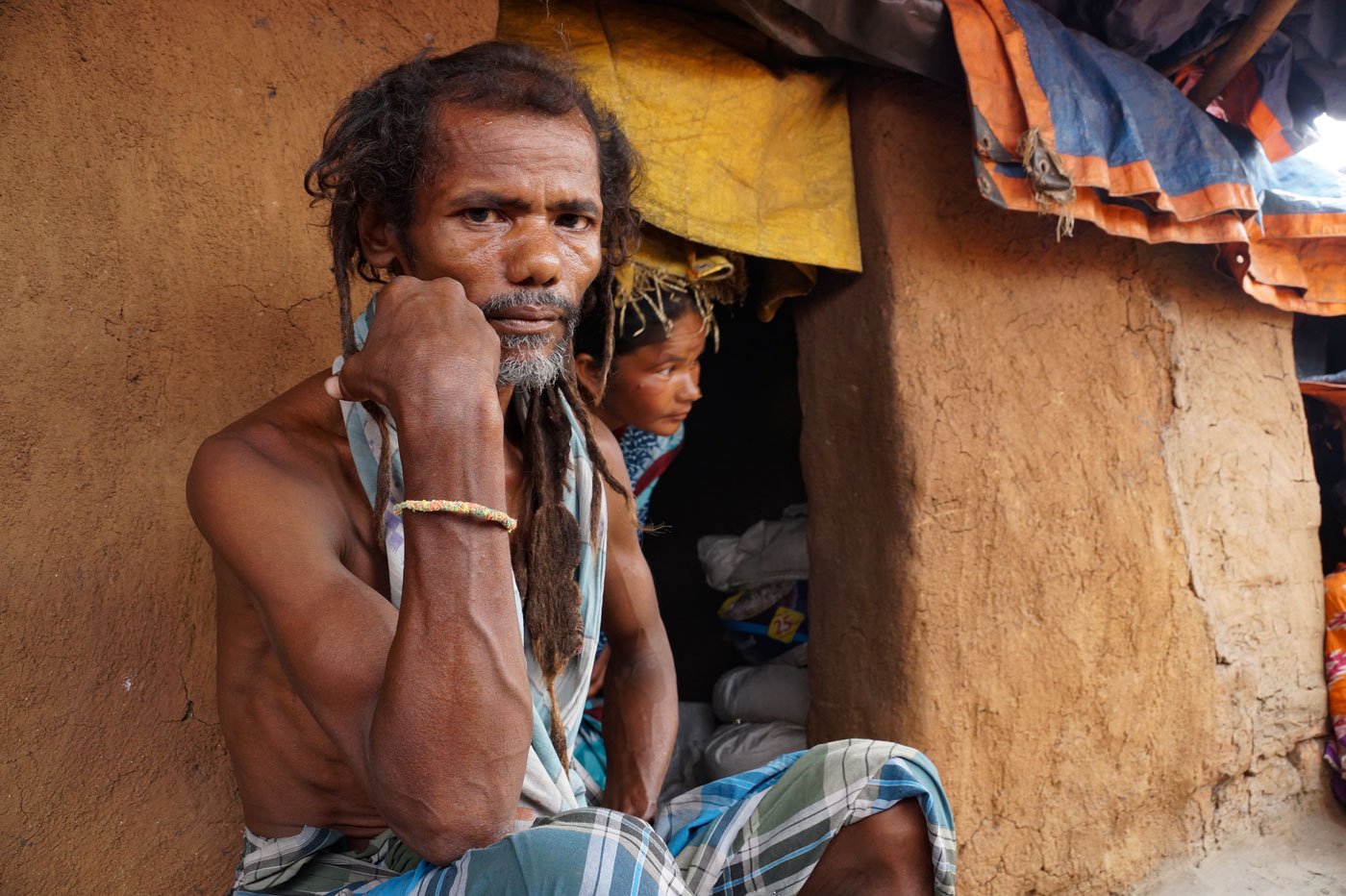 Locked into the kilns, brick by brick

“There is no lockdown inside the brick kiln. We have been working every day as usual,” said Hruday Parabhue, when we met him on April 5. “The only change is the weekly village market is closed, so we are facing difficulties in buying foodgrains and essentials with the weekly allowance we get from our employer.”

Hruday has been working at a kiln in Telangana for three years now – pushed into this work by debt. Every year, he leaves his wife behind in Khutulumunda, their village in Turekela taluka of Odisha’s Balangir district. “I used to earn well in my village as a lohakaar [blacksmith], but fell into debt after I constructed my house. Then notebandi [demonetisation] followed,” he said, speaking in broken Hindi. “There was very little work in my village, and with my loans mounting I am forced to come here to make bricks. Everyone is in debt here [at the kiln].”

The unexpected lockdown on March 25 created confusion and uncertainty among workers at the kiln Hruday works, in Gaddipotharam village of Jinnaram mandal in Sangareddy district. “Every Friday, we used to go to the village market three kilometres from here, to purchase vegetables and foodgrains with our weekly allowance,” said Joyanti Parabhue, a distant relative of Hruday’s who works at the same kiln. “Some men buy liquor too. Now all that has stopped because the market is closed due to lockdown.”

Although the workers managed to purchase some food items from the Friday market two days after the lockdown began, they were stranded the next Friday because the market was shut by then. “It has become difficult to procure food,” Hruday said. “Police shooed us away when we ventured a bit further into the village looking for shops, as we don’t speak their language [Telugu].” 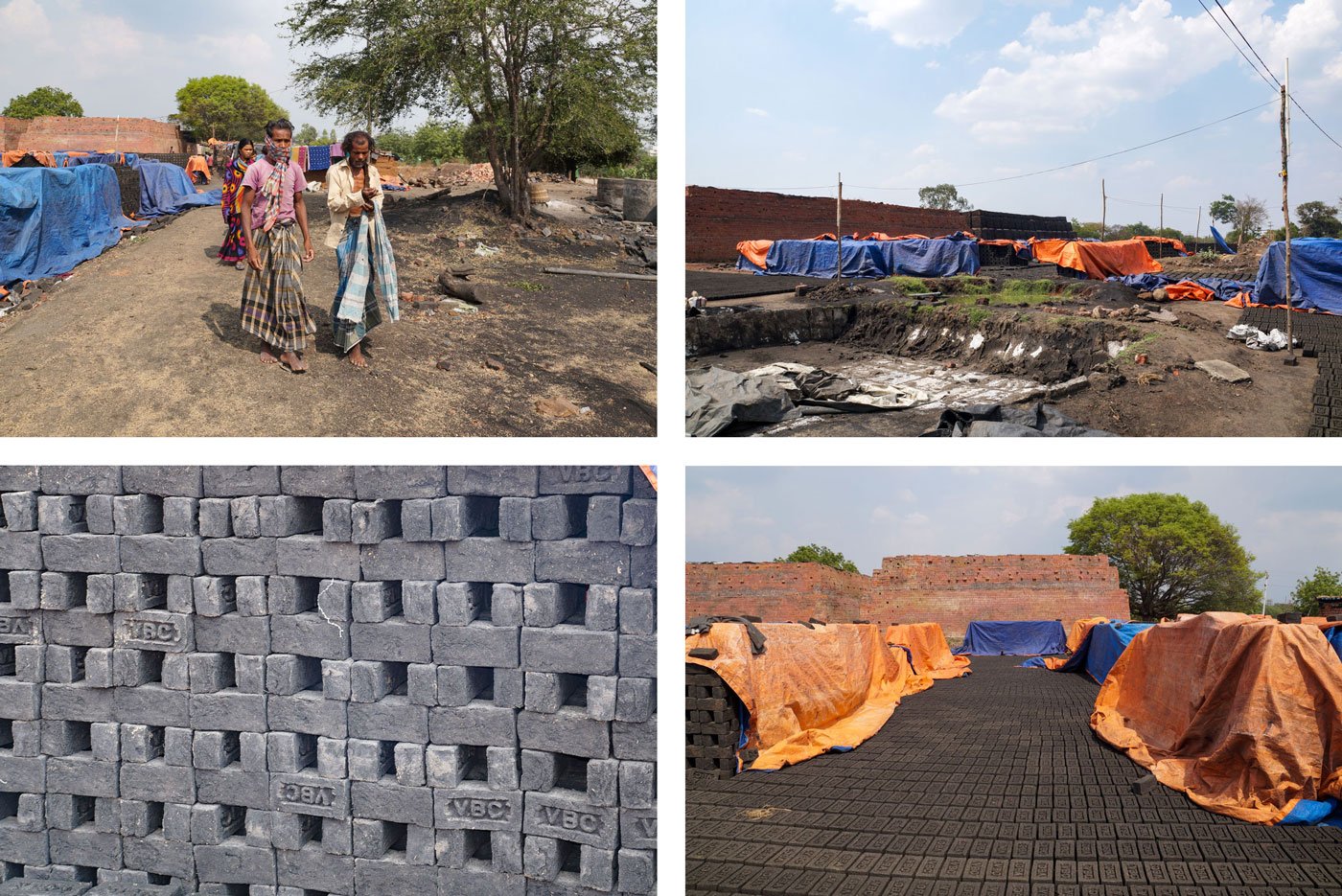 Hruday Parabhue (top left, in white shirt) and other workers at the kiln in Gaddipotharam. Brick kilns in many parts of Telangana have continued to operate during the lockdown

Brick kilns in many parts of Telangana have continued to operate after March 25, despite the lockdown. The workers had received their wages before arriving at the kiln at the end of 2019. “Each of us received Rs. 35,000 as advance before coming to work in the kiln, ” Joyanti said. She and the others also receive an allowance for food of Rs. 400 per week for each family. (However, the workers kept saying that this was per person – probably accounted for by the fact that the owner of the kiln and the mandal revenue officer were present through that part of our interaction with them. In their presence, the workers also said their owner – in this, one of the most exploitative industries - always treated them very well!)

The workers have to meet a daily target of bricks – 3,000 to 4,000 per family team – during their seven-month tenure at the worksite. Work in the brick kilns begins in late November or early December every year, after the workers arrive from Odisha. It goes on until the end of May or early June.

At the Gaddipotharam kiln, all the workers are from Odisha. Many of them – like Hruday and Joyanti – belong to the Luhura community, listed as OBC in the state. A sardar , or contractor, usually brings a group of about 1,000 workers in each season to various kilns in Telangana, Hruday explained. “There are many contractors who visit villages across Odisha, gathering workers like us. I came with a small contractor. A big contractor can even bring 2,000 workers.”

This time, Hruday brought his teenage daughter to work with him. “Kirmani must be 16 or 17 years old. She dropped out of school, so she has come here with me to work. An additional pair of hands is always good in making bricks, and we need money for her marriage,” said the 55-year-old father. Now, fearful of the coronavirus and the lockdown extending indefinitely, they can barely wait to go back to their village. 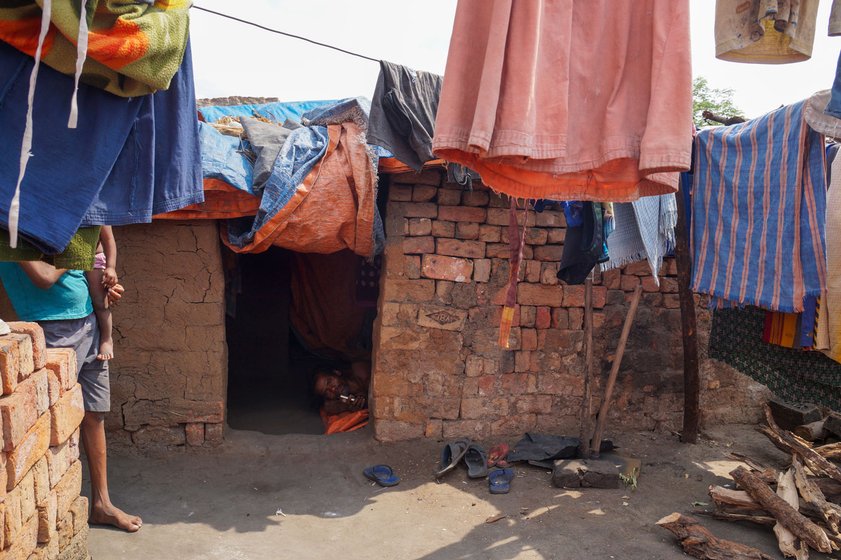 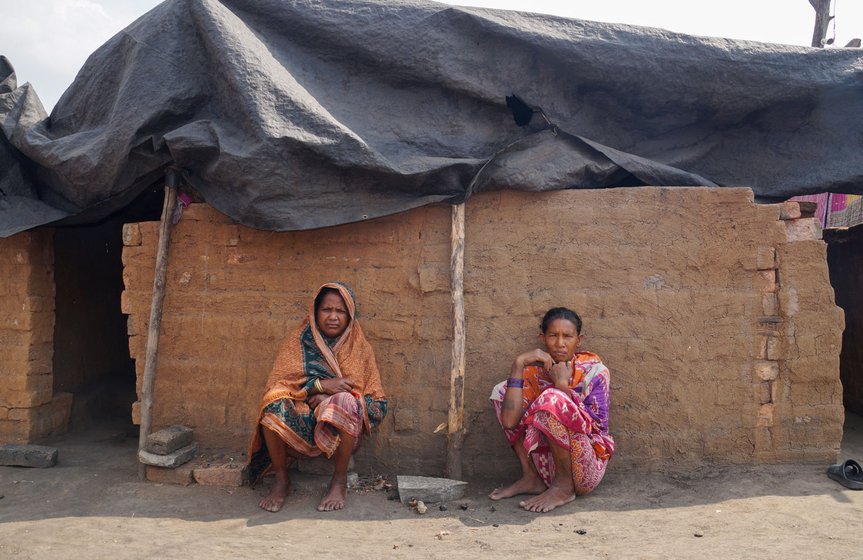 At present, around 4,800 migrant workers from Odisha are working in 46 brick kilns in Jinnaram and Gummadidala mandals of Sangareddy district, says a source at the local education office of the state government. And 316 children between the ages of 7 to 14, who attend the worksite schools run by the education department for migrant children, also live on the brick kiln premises. (The number of children younger than six years is not known.) The kiln that Hruday and Kirmani work at has 75 families – all from Balangir district – with 130 adults and 24 children in the 7-14 age group, as well as younger kids.

“We start making bricks from 3 a.m. and finish the work by 10-11 a.m. We take a break after the morning shift. Women go to collect firewood, finish cooking, bathe the children and eat around 1 p.m., and then rest for a couple of hours,” said 31-year-old Joyanti, a mother of three, who works the same number of hours as her husband in the kiln. “Four persons work as a team. We again start work at 4 p.m. and continue making bricks until 10 in the night. By the time we eat dinner, it is close to midnight, or even 1 a.m.”

Joyanti was married when she was 14 or 15 – she doesn’t remember the exact age. When we met her on April 5, she was holding on to her two-year-old son Bosanth, and trying to prevent her six-year-old daughter Anjoli from emptying a bottle of talcum powder, with which she was powdering her face to pose for photographs. Joyanti’s oldest son, 11, studies in the worksite school located at another kiln within walking distance, but the school is closed now because of the lockdown. Joyanti herself has never been to school; to tell us her age, she showed us her Aadhaar card.

Joyanti’s husband’s family owns two acres of land in Khutulumunda. “Only one acre is cultivable,” she said. “We grow cotton, because everything from seeds to pesticides is brought to our doorstep by the seed company’s agents. They come back to buy the harvested cotton from us. We start sowing in June, when it rains, and harvest cotton at the end of November or early December. They give us Rs. 10,000 for the harvested cotton every year.” 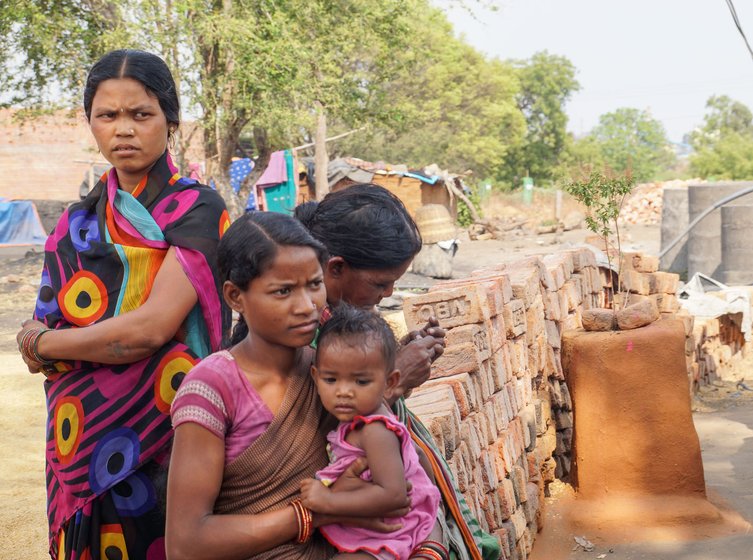 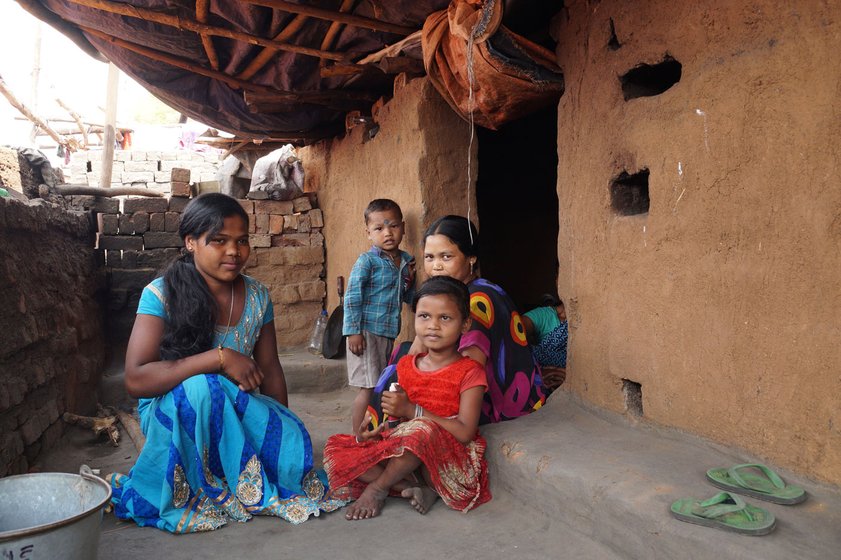 No one in their village, or the buyers, weighs the cotton sold to the companies. “We are happy that they give us seeds, pesticides and also purchase the cotton,” Joyanti said. “Rs. 10,000 is not enough for a large family like ours. We have been coming to work at this brick kiln right after harvesting cotton every year.”

At the kilns, the workers live in makeshift huts made from stacks of broken and damaged bricks. Only a few huts have mud plastering. The brick kiln owner has installed a water filtration machine that provides drinking water – it’s the only amenity at the worksite.

Gita Sen, 27, holding her infant in her arms, showed us the open area behind the kiln. “We relieve ourselves in the maidan [ground] out there. We have to carry the water till here for bathing and washing clothes. Men have their bath anywhere. But we women bathe here,” she said, pointing to a small area – four slabs of stone, a few broken plastic pots half-filled with muddy water, and a plastic sheet cover supported by sticks. “One of us stands guard while the other has a bath. We carry water from the storage tank located near the kiln.”

A few other women with infants and children came to where we were, near the half-dried stagnant water pools formed after the morning’s bathing. They all want to go home. “Can we all go back to Odisha after the lockdown?” Gita asked, hesitantly.

A few women with children gathered where we were – they all want to go home. Right: A bathing area at the kiln, which has barely any amenities

On March 30, the Telangana government had ordered the distribution of 12 kilos of rice and Rs. 500 to each migrant worker as part of the relief measures during the lockdown, which was to end on April 14. However, it hadn’t reached the migrant families in Gaddipotharam until April 5. And neither had the families been able to buy anything from the village market. When volunteers delivered 75 ration kits (contributed by a private company) with two-weeks of essential food items for the families, they had been hungry for a day.

After the district administration in Sangareddy was informed of their situation, the collector sent the rice and money to the workers on April 5. But it was given to each family and not to each person. Many migrant workers we spoke to say that they are at the bottom of the pile for relief distribution, below ration-card holders in the state. With their allowance, the workers have since managed to purchase a few items from the village shops, which are now open in the morning until 11 a.m.

All of them remain desperate to go back home. “Do you want us to stay here waiting for corona to get to us?” asked Hruday, angrily. “If death is inevitable, we would all rather die in our homeland amidst our family members.”